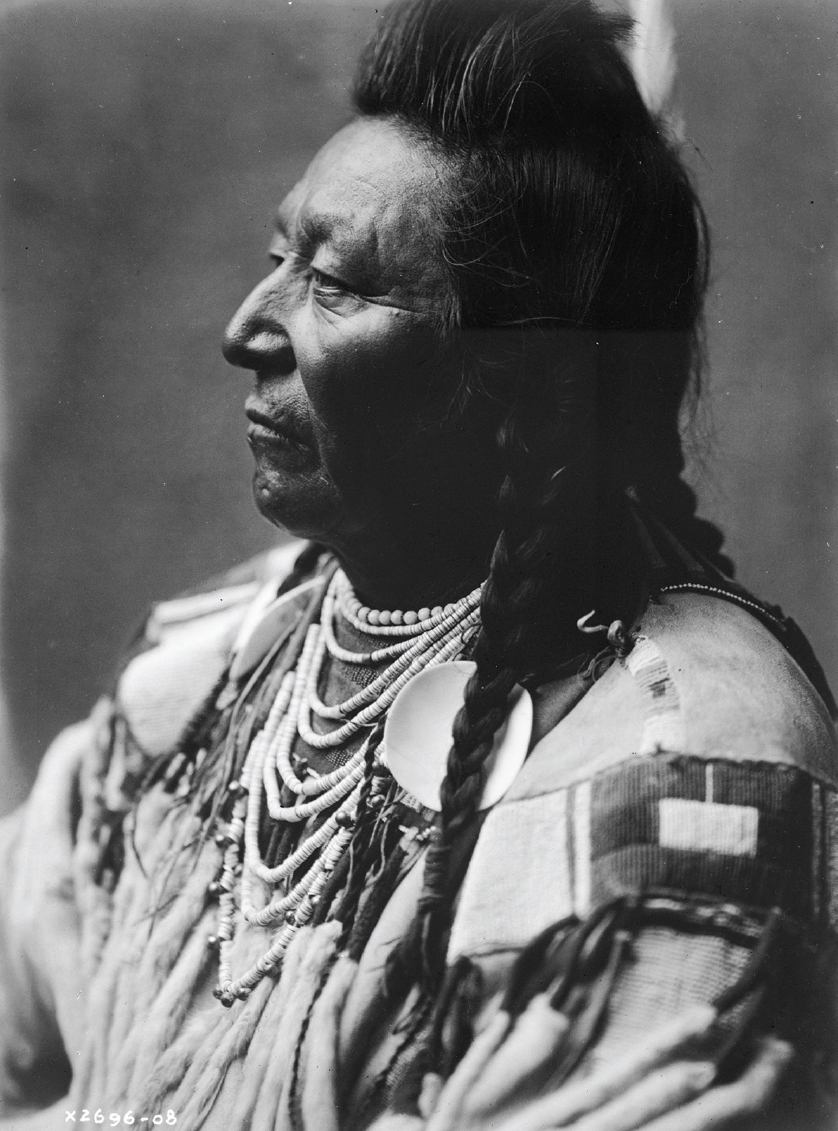 17 Oct History: A Gift from the Chief

Just eight days before the terrible events on the Little Bighorn in June 1876, a young Crow chief crested the ridge above the Rosebud valley in Southeastern Montana. He and his warriors paused to admire the neat organization of General George Crook’s camp below and the precision drills the troops were practicing. Then, the Crow put on a show of their own:

“Our faces painted, we put on our war-bonnets and sprang upon our horses. We gave the Crow war-whoop, and, firing our guns in the air, dashed down the hill. … Suddenly the soldiers stopped, the horses stopped, all in little bands. … All were in straight lines, all, with Three Stars [General Crook] and his head men on beautiful horses in the lead. … Our guns were cracking and we raised a big dust. We threw our bodies first one way, then another on our horses, just as we do when fighting. Some of us sprang to the ground and back again without even staggering our horses, and all the time our beautiful bonnets were blowing in the wind. Ah, that was a great day!” —Plenty Coups at age 80, to his interviewer/biographer Frank Linderman

If all that wasn’t celebratory enough, Crook’s other allies, the Shoshoni, arrived soon after with a similar display of skill and bravado. But though there was much heroism on each side, the “great day” faded with the Battle of the Rosebud itself. Crazy Horse and Two Moons, with around 1,500 warriors, fought Crook and his Crow and Shoshoni allies, numbering a few over 1,100, in a classic cavalry battle, seemingly a tactical draw. But, in terms of results, the Sioux and Cheyenne won the day, for Crook had to pause for re-supply and never reached the Little Bighorn, where he might have assisted Custer. Crow and Shoshoni hopes were dashed for a decisive victory over their hereditary enemies, who were advancing steadily westward into what the Crow considered to be their homeland.

Prowess in battle was an essential life skill for males of the Crow (also called Absaroka, or Apsáalooke in their own language), situated as they were in prime hunting country that was coveted by other tribes. Plenty Coups earned his name by touching many Cheyenne, Sioux, Flathead, and Arapaho enemies with his coup stick, and killing a number in battle as well. His bravery was fueled by his confidence in the strength of the eagle, one of the creatures revealed to him as his “medicine,” or his spiritual power. But Plenty Coups’ true greatness was embodied in another creature, revealed in his vision quests as a source of wisdom, with the ability to grasp the larger picture, and to observe and anticipate the qualities that would ensure the survival of his tribe. The creature with these different powers was the tiny chickadee. 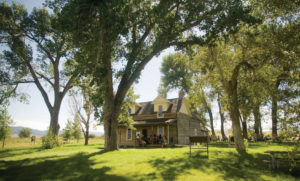 As a young boy, Plenty Coups experienced a complex vision suggesting buffalo would be replaced by the cattle of white settlers. In this vision, strong winds blew all the trees down save one, the home of the chickadee. This small bird was a listener and an observer, a bird Crow elders believed had a grasp on the future. Plenty Coups, brave as he’d been in battle, had an even more important future than that of a distinguished warrior. He would lead his people through the most wrenching possible time, through the transition from a life built on the free-roaming pursuit of buffalo and neighboring enemy tribes, to the inevitable future: life on the reservation and within the “white man’s world.”

The chief knew that the future did not lie in war. Making peace with whites was already a Crow tradition, but now the reason lay beyond using that alliance against tribes that had attempted to eradicate the Absaroka. Now, survival depended on learning to fight battles of a different sort. The first ally would be education. “Education,” he said, “is your most powerful weapon. With education, you are the white man’s equal; without education, you are his victim, and so shall remain all your lives.”

Other weapons in this new war included a shrewd grasp of diplomacy. Plenty Coups seems to have learned quickly the political acumen necessary to defend his people against new threats to their remaining land. Though not tall in stature by Crow standards, Plenty Coups had a commanding presence. He soon was sought by government leaders as a spokesman for his and other tribes, which resulted in a series of visits to Washington, D.C. 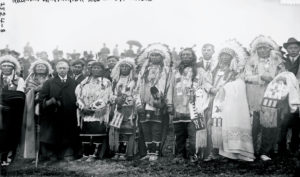 Interestingly, though, Plenty Coups’ autobiography as narrated to Linderman, titled Plenty Coups, Chief of the Crows, excludes the accomplishments so much admired today. He terminates his narrative at the point when the buffalo disappeared and the intertribal warfare ceased. He doesn’t mention friendships with Theodore Roosevelt, Bill Cody, and a host of others. Even his 1921 presentation of his war bonnet and coup stick at the tomb of the unknown soldier in Washington, D.C., his speech there in honor of the fallen warrior, and his selection as the sole Native American to make such a presentation go unmentioned. He was called Chief of Chiefs, the one Crow elders decided was to be the last chief of their tribe. No one could step in his shoes.

A CHILLY NOVEMBER DAY, my wife Emily and I head east from our ranch near the site of the second Crow Agency south of Absarokee, Montana, through the tiny town of Edgar, and onto a gravel road toward the town of Pryor. I feel a touch of nostalgia. Many years ago, I took busloads of chattering students on this route with the same end in mind, to visit the gift Plenty Coups made not just to his own Crow people, but to all Montanans and all Americans. 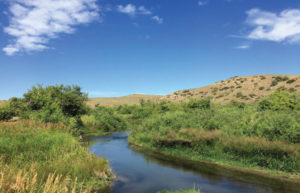 On a trip to Washington, D.C., Plenty Coups visited Mount Vernon, George Washington’s home, and was impressed that this great chief had granted his home and acreage to “all the people.” Several years before his death in 1932 at age 84, Plenty Coups followed suit, deeding 195 acres to Big Horn County (not solely to the Crow). Situated on the banks of Pryor Creek near a sacred spring, the acreage holds the log home Plenty Coups built, along with a fine museum in what is now Chief Plenty Coup State Park.

We are greeted warmly by park ranger Emily Tyler and chief of maintenance Mark Bruised Head. So late in the year, we are the only visitors in the park, and the two of them are free to give us the royal treatment. We pile into a utility vehicle to drive a circle around the acreage, but with a particular target in mind. Though I’m not prepared to fish Pryor Creek today, I’m anxious to look at the water, and Bruised Head is ready to show me the best fishing holes. 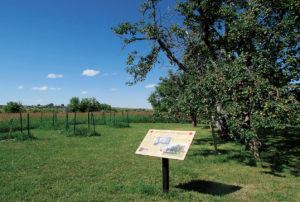 Plenty Coups’ apple trees are said to be the oldest fruit bearing trees in Monana.

Perhaps because the park lies within reservation boundaries, many anglers don’t realize the fishing is there for all, just as Plenty Coups wished it to be. The water looks delicious, the holes deep and inviting. Bruised Head mentions that it’s the fly fishermen who nail the big ones. Browns, rainbows, and brook trout prevail, though cutthroat have been stocked farther south, up where the creek emerges from the Pryor Mountains.

Tyler and Bruised Head wear their pride in the park on their sleeves. Their enthusiasm is contagious. They point out Plenty Coups’ apple trees, said to be the oldest bearing trees in Montana, and Tyler tells of her birdhouse for, of course, chickadees. We leave anxious for more, anxious to return in the spring with fly rod in hand to partake even more thoroughly in the chief’s wonderful gift. And in the lilacs fronting our ranch home, I’ll relish even more the song of a frequent visitor, a small but beautiful and powerful one: the chickadee.

Dan Aadland was raised mostly in Montana, served as a Marine officer in Vietnam, then earned a Ph.D. in American studies at the University of Utah. Widely published in equine and outdoor magazines, his 10 books include In Trace of TR: A Montana Hunter’s Journey and Sketches from the Ranch: A Montana Memoir (both from the University of Nebraska Press). Retired from teaching, Aadland and his wife Emily raise cattle, horses, and mules on their historic Montana ranch.