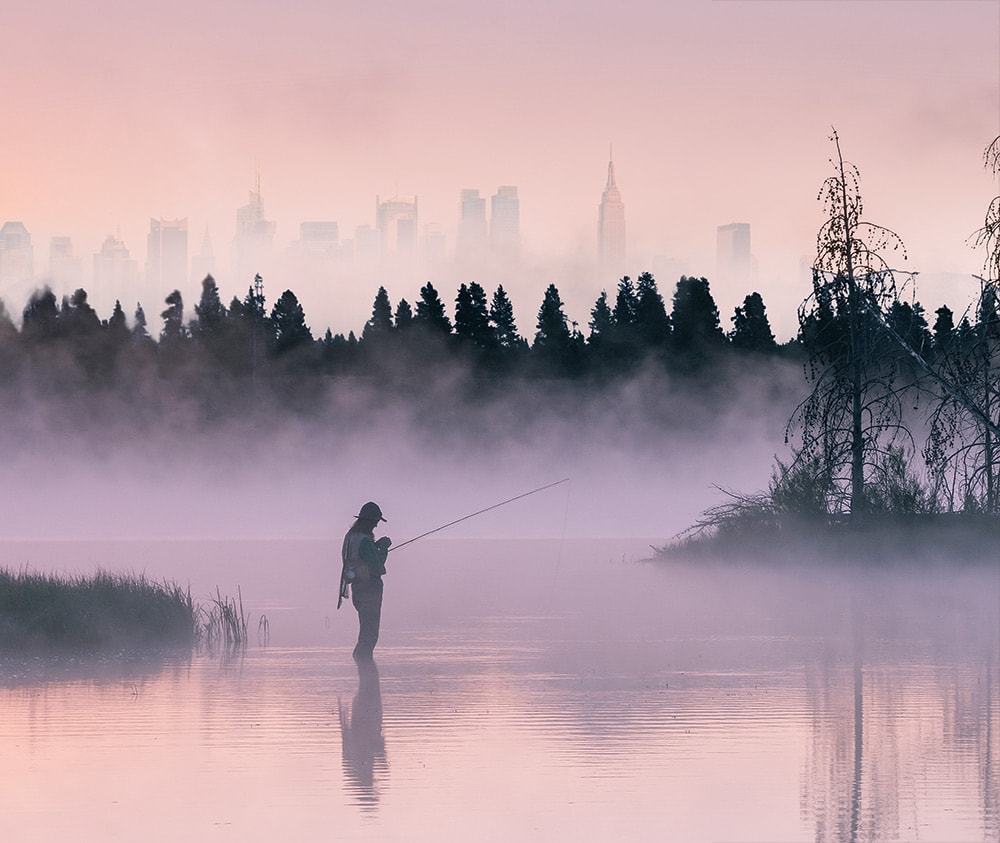 The ambulance howls at the window, the third one today. I tell myself to keep writing, but my focus is like an oiled piglet. I contemplate lunch again. Umami brine pho? Confit turkey club sandwich? Lengua tacos with sharp, raw onions and flame-ass chiles? Meal planning is an excellent antidote to existential self-doubt.

Sirens echo for a few blocks, then fade, leaving only the normal jittering of Atlantic Avenue. I slouch back into my workday routine: muse about fish, hooks, water, people — the essential topics. I become distracted by well-stocked bookshelves, back issues of The New Yorker, and “that place where time and reason go to die” (the internet). Repeat until angst drives me from the lonely apartment into the waiting embrace of a well-researched restaurant that doesn’t offer Wi-Fi. Eat excessively. Walk the streets of Brooklyn until the meal settles and then make a penitent excursion to the gym that bears only the mildest resemblance to monastic self-flagellation. All in all, I think I’m settling in quite well. Still, my wife’s friends remain curious, if not skeptical.

New Yorkers who know my story almost always ask these questions. Their subtext peeks out through inquisitive eyes and compassionate faces at dinner parties: Can the Montanan handle it? Is his soul rotting in the urban canyon, being pecked to shreds by feral pigeons?

I smell a veiled desire for catastrophe behind the empathy. I wonder if they’re anticipating, maybe hoping, that I will start baring my teeth and snapping my jaw, turning over trays of crudité and bowls of hummus as I bolt for the door. But that animal is hibernating. Really, I’m just another lanky, mid-30s white guy in plaid with beard sleeping on the right side of the East River and working as an “independent creative.”

I detect disappointment when I explain that I’m fine — enjoying the food, the people, and weekly walks along the river. No one wants to hear that I’m fine; everyone’s fine. Chain hotel beds are fine, but they don’t make for lively dinner party repartee.

This is probably projection on my part, and unfair at that. Contrary to cultural stereotypes, I’ve found New Yorkers to be quite pleasant. I find that people are actually far more amicable on packed subways in New York than at late-June boat ramps in Montana during the salmonfly hatch, or when trapped within the fresh-blossoming reality of Bozeman rush hour traffic. New Yorkers expect to be congested, hurried, and delayed. It’s the expectation of solitude in the face of a crowded reality that incites entitled outbursts.

This year marks my second winter living in the largest city in the U.S. My primary complaint is that it’s loud, really loud, cacophonously loud. The hold music in hell is car horns and sirens reflected off brick walls. (Yes, my version of hell definitely includes hold music.) Moving to New York was never part of my plan, but, now that I’m here, it’s not nearly as dreadful as I had feared. It’s not Montana, but to be honest, sometimes that’s why I appreciate it.

Until last year, I’d never lived east of Montana, and much of my young life moved at the mercy of rivers. To quote another Montana author, David Quammen:

“I looked at a map and saw jagged blue lines, denoting mountain rivers. All I knew was that, in Montana, there would be more trout. Trout were the indicator species for a place and a life I was seeking.”

I spent 15 years chasing blue lines. Funding that chase required waiting tables, mopping floors, scrubbing toilets, pouring lots of beer, serving untold gallons of ranch dressing, vacuuming lipstick stained cigarette butts from outdoor stairwells, squeegeeing windows, parching and slicing my tongue on stacks of gummed envelopes, anything that paid for the essentials without consuming too many daytime hours or requiring too serious a commitment. The best ones tipped well and offered discounted pizza. Somewhere in the middle of that decade, I started working as a fishing guide and publishing stories about fishing. When asked, which happened often at that time, what I was doing with my life, I wish I had had the foresight to answer, “research.”

Why did I trade snowy Montana winters for rainy New York City ones? The simple answer is that I fell in love with a woman who lives and works in the city. She fell in love with a man who lives and works in Montana. I spend much of the winter here; she spends much of the summer there. But the actual complexities of our lived truths are never simple, no matter what we tell ourselves. After all, New York City is to writers as Montana is to fly anglers.

The River Why, David James Duncan’s modern fly-fishing classic, mines the importance of personal relationships and the specific necessity of time spent not fishing in order to appreciate time spent fishing. Gus and I stumbled up similarly brambled hillsides, though mine were mostly confined to the Northern Rockies and resident trout rather than the Pacific Northwest and anadromous species. But still, for many years my annual schedules (the tides of my life) were determined, or at least strongly influenced, by the habits and preferences of oblong aquatic creatures no longer than my arm, rarely longer than my forearm, and most often the length of my hand. I regret none of the time I spent carrying a rod beside water but, like Gus, I’ve learned that fishing to escape oneself can be the frame of a worthwhile life, but not the painting itself.

March used to be my favorite: months of cold temperatures and little angling pressure mean the trout are hungry, naïve, and concentrated in the deep, slow, winter holding water. In March, pre-spawn rainbows start smelling deep-time odors of biological imperative. Reservoir residents migrate upstream. Days lengthen. Snows still fall, often the heaviest of the season, and air temperatures stay deep enough to keep the majority of anglers elsewhere. The few I regularly met on mid-day excursions to favorite runs, carrying only a two-handed rod, a box of spey flies, and a small flask, were greeted as comrades rather than competition. During those rare weeks when the season often disagrees with the weather, strangers and I would sometimes trade tips, sips, and reports, at the very least respectful and appreciative nods. In a few months, we same good-natured souls would scowl at each other from opposite banks, seeing only more flesh in the press.

April can be excellent too. Baetis and midge hatches are my preferred dry fly fishing. Big bugs may garner the most attention, but I’ll take the sublimity of the sip over the barrage of the blitz. In April, private spring creeks still charge early season prices, and rods are often available on the shortest of notice. Like, say, if one wakes to see low-ceiling gray holding a heat wave — mid-40s — under sagging, fertile cloud bellies. Even when the bugs failed to appear, those days never stank of regret. Standing beside a crawling run, ranunculus and tails waving in symphonic cadence, water so clear it looks breathable, I swear I could be happy without making a cast. Of course, I’ve never tested that theory.

Come May I’ll head home, in time for guide season, shorts weather, the most notable hatches, and summer days when dawn to dusk exceeds the finite roundness of watch faces with spiraling fingers. But for now, I can contentedly sip coffee and think about brown trout, picture concentric ring rises stretching from riffle-corner to tailout, without ever shedding my plaid flannel pants.

My New York winters are, in some ways, a peaceful torpor. I have no lift-lines to race, or feeding windows to time. When Amy wakes at dawn, I am free to wind myself in blankets and slumber against the coolness of the morning. I can read and write and (in theory anyway) tie flies.

When New Yorkers think of Montana, they imagine respite and relaxation, but Montana is not a place of rest for me. Montana is an endless wellspring of expectation and movement: peaks to summit, birds to scare up, trails to ride, drifts, mends, lines, rises, wind-ripped days of drift boat rock-dodging with vast entanglements of monofilament above my head and hooks buried in flesh that I really hope I remembered to de-barb. Montana is a squinty-eyed, sunburnt hustle of early morning handshakes and trained-parrot casting instruction. Montana is truck-tire road hum and keeping a skeptical eye on horizon clouds in case we need to hike out of this canyon before the two-track washes out.

Montana ratchets me into my best and worst self, rising early and sometimes grumpy, hawking over USGS stream data and weather forecasts, facing the late-night impossibility of tying enough of the one bug that they were eating today, knowing that tomorrow they won’t want it. Montana is a thick-backed brown trout resting over shallow cobbles for those few exalted moments of breath and elation before she kicks back into the current.

Montana isn’t waiting, but she’s there; I can feel her. I can sense her sprawling, straight-spined space from inside this cramped and stacked one. But this city doesn’t wait either, this mind-boggling assemblage of people (8.3 million of them!) who don’t know I exist and expect nothing from me. This city where I can shoot under rivers in screeching train cars rather than fighting current and slick rock to ford them; where derelict poets and former frat-boy financial brokers share sidewalks and judge each other at hot dog carts. Just thinking about it makes me want to go for a walk. So I do. As usual, I head west, toward water.

The murk of the East River mixes with the slate-gray Atlantic in complex eddy lines as the tide comes in. The skyline of lower Manhattan frames the far side of the river; the Statue of Liberty stands erect in the bay, not quite facing me; blunt tugs push bow wakes; bright yellow water taxis cross between multidecked ferries and tour boats; people jog past in spandex. My eyes take all of this in, but consistently are drawn back to a swirling foam line that’s moving steadily upriver. I think about holding water and ambush points, predators and prey. I think about fishing.