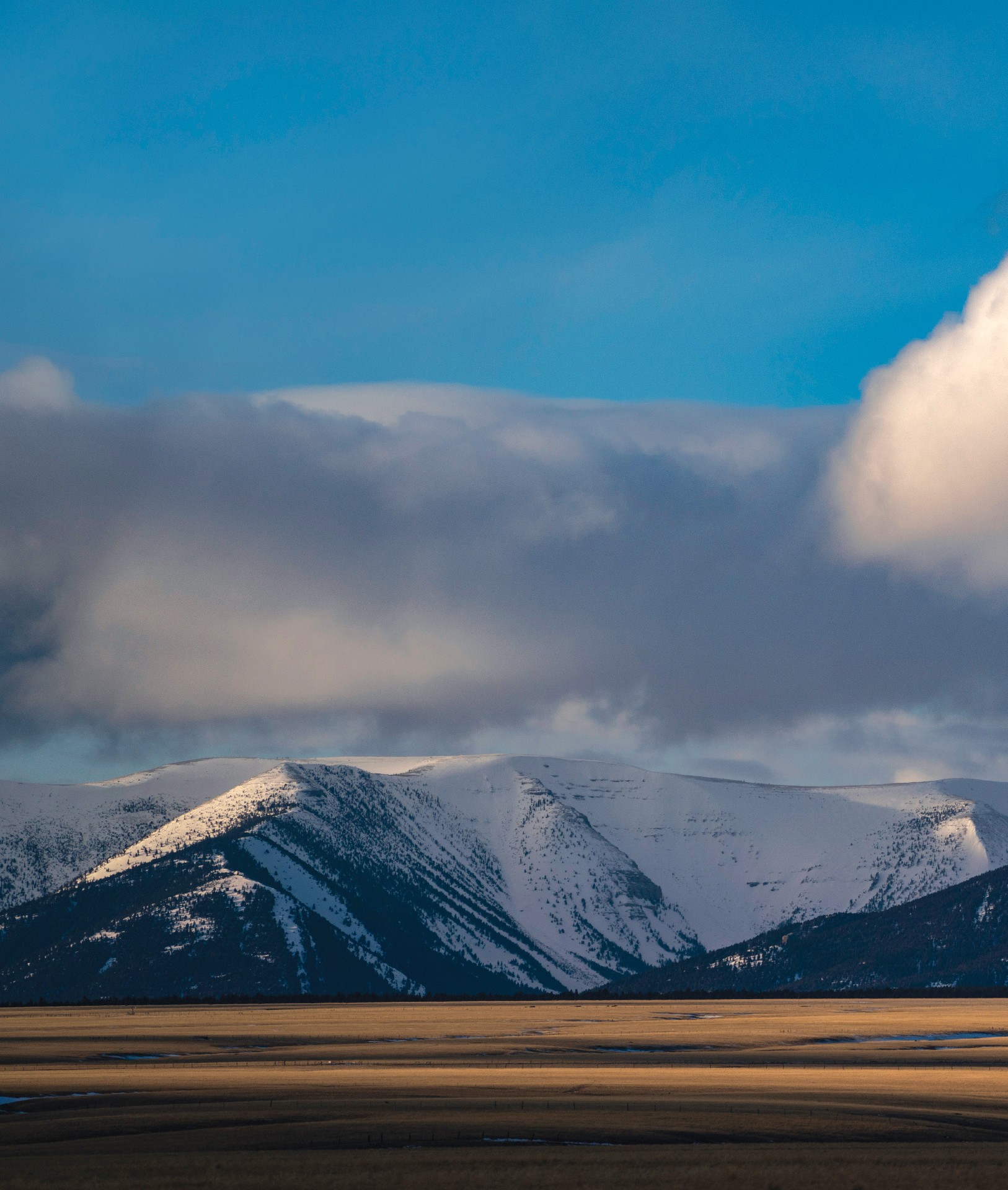 The Big Snowy Mountains rise out of the wide-open prairies in central Montana, south of Lewistown. Photography by Erik Petersen.

23 Nov Grizzlies on the Move

In late April 2021, Lewistown, Montana outdoorsman Brad McCardle was enjoying his free evenings in the foothills of the Big Snowy Mountains. He was hunting black bears — which are abundant in the area and legal game — but he wound up finding far more than he expected when a series of events led to an encounter with an iconic mammal that hadn’t been seen in those parts for decades. 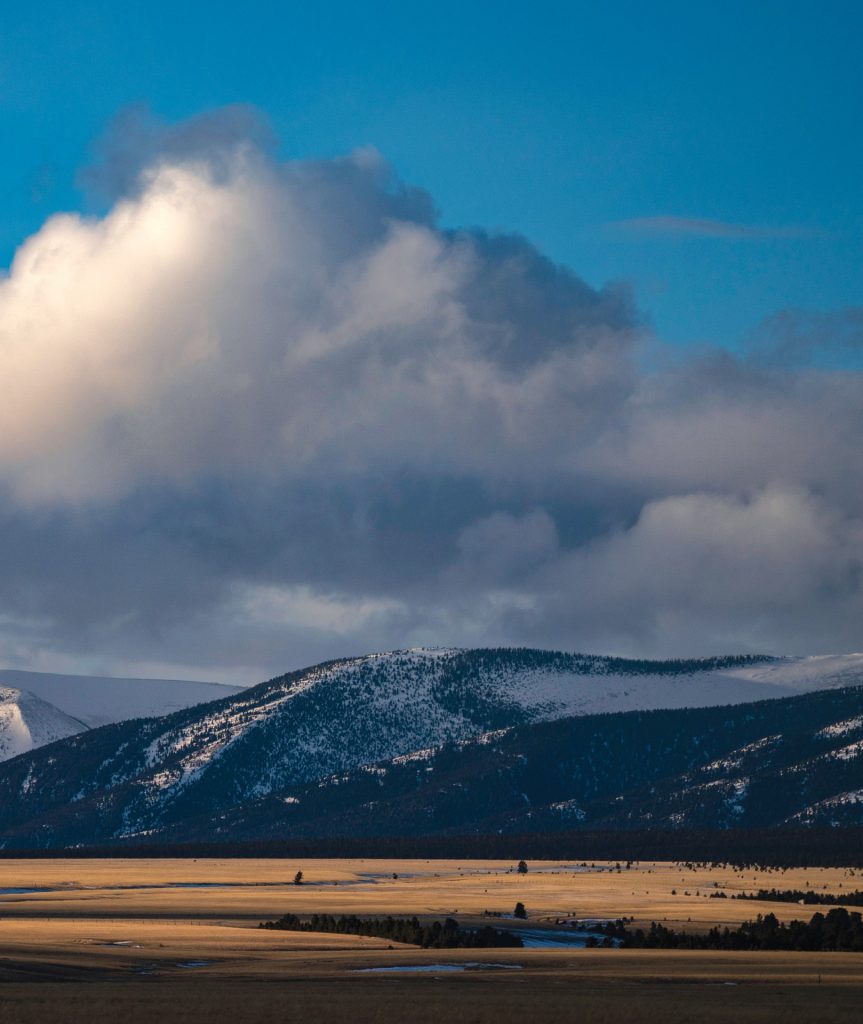 It all began when the manager of the ranch where McCardle was hunting asked him to look for a missing cow. He located the carcass and quickly recognized that the full-grown Angus had met a violent death. The animal had been clawed and mauled, and tracks indicated that something had dragged it through a nearby fence during the fight. Concluding that the culprit was a bear, McCardle retreated cautiously and made plans to return with his hunting partner Mark Schwomeyer.

Out of the state at the time, I received an interesting set of digital photographs from my friends the following day. The pair had performed a thorough crime scene investigation that included partially skinning the cow and examining what lay beneath the hide. Photographs revealed evidence of claw and bite marks, along with significant crush injuries. Of particular interest to me was the extensive dissection of blood between multiple tissue planes, indicating that the cow’s heart had been beating during the assault. The cow had not died of natural causes.

My friends described the large tracks in the mud nearby, presumably left by a big black bear. (Tracking conditions were less than ideal.) We had to entertain a conclusion that would have been obvious had these events taken place closer to Yellowstone or Glacier National Park. “This doesn’t look like the work of a black bear,” I replied by email. “I think you’re dealing with a grizzly.”

The only problem with this theory was that there had been no confirmed evidence of a Montana grizzly this far east for decades. 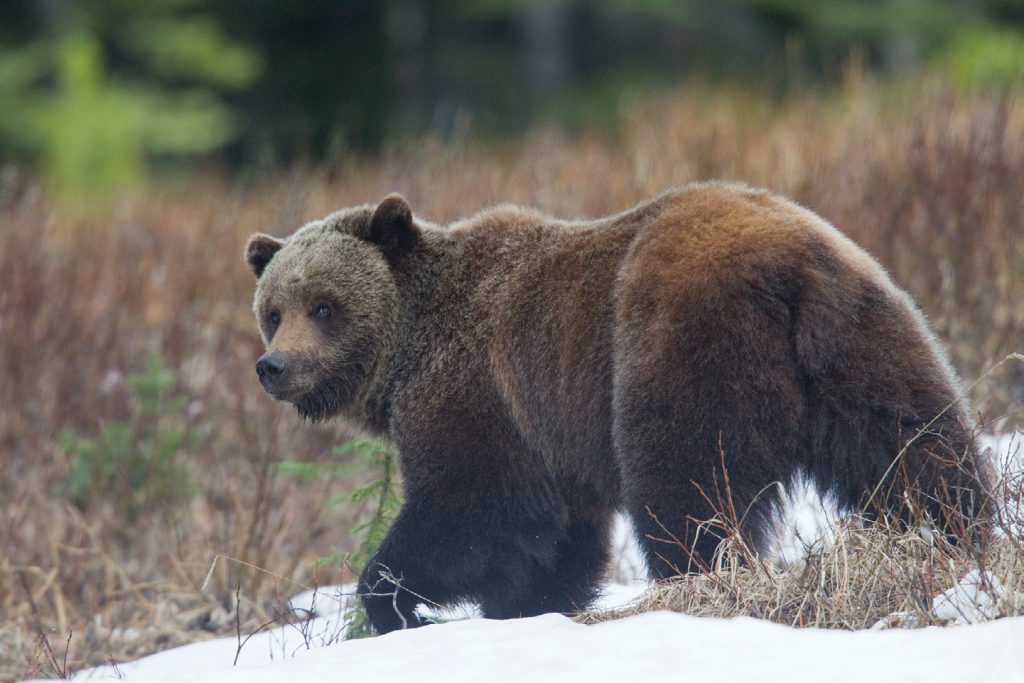 More and more Montanans will have to learn how to distinguish black bears from grizzlies.The characteristically pronounced shoulder hump on this grizzly makes it easy to identify, but in many cases, it’s not this obvious. Photography by Donal M. Jones.

Grizzlies enjoy a wide distribution around the top of the northern hemisphere. Originally a Eurasian species, they arrived in North America via the Bering Sea land bridge some 15,000 years ago, along with a number of other large mammals, including elk, moose, and human beings. Many of us grew up thinking of grizzlies as creatures of remote mountain habitat — as indeed they were for most of the last century — but that was only because we had displaced them from much of their natural range.

The Lewis and Clark Expedition provided the first reliable description of America’s grizzlies. On April 29, 1805, near what is now the eastern border of Montana, Meriwether Lewis and his companion stumbled upon a trio of what they variously called the brown, white, or yellow bear (to distinguish the species from the familiar black bear). They opened fire, and in a classic example of “it seemed like a good idea at the time,” the one bear they hit and wounded charged them before it died.

The expedition encountered a remarkable number of grizzlies, and the creatures consistently impressed the explorers, both with the ferocity they expressed when wounded and the difficulty the men experienced trying to kill them. These records establish the presence of a large grizzly population on the open prairie, far from what we consider to be their typical habitat today. However, by the 1900s, Montana’s dwindling grizzly population was limited to the western portion of the state, particularly in the remote terrain around Glacier and Yellowstone national parks. 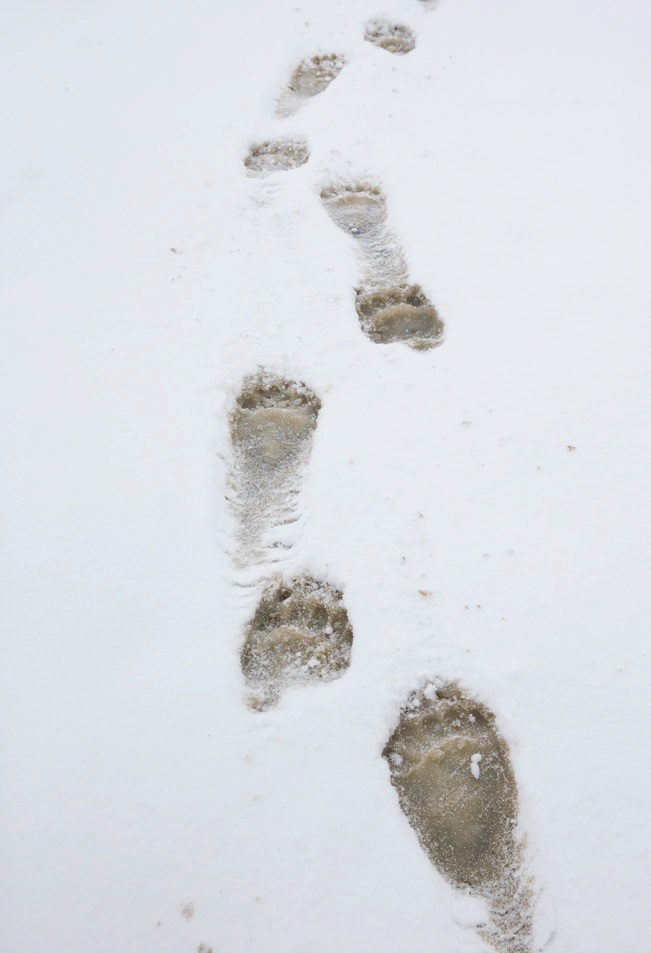 Snow doesn’t mean that all bears are in their dens for the winter.The square outline of the front of the foot pad and forward position of the small toe prove this to be a grizzly track. Photography by Donal M. Jones.

In 1975, after analyzing data confirming the species’ decline, the U.S. Fish and Wildlife Service (USFWS) listed grizzlies as threatened throughout their range in the Lower 48. This decision, which triggered numerous regulations intended to protect the bears, has faced repeated litigation from both opponents and proponents, resulting in several rounds of delisting and relisting.

All agree that the bears have enjoyed a remarkable comeback; the grizzly population in the Greater Yellowstone Ecosystem, for example, has increased from a mere 136 in 1975 to more than 700 today. Management decisions have grown difficult as opinions regarding their place in modern-day Montana have become more polarized. Despite meeting established grizzly population goals to delist for the sixth year in a row by 2003, some still consider their recovery too tenuous to justify doing so anytime in the near future. Others regard increasing grizzly populations as an existential threat to people, livestock, and Montanans’ way of life.

And the matter is no longer confined to western Montana. During the last decade, grizzlies started appearing in plains habitat north of Great Falls, occasionally frequenting dwellings, raiding gardens and chicken coops, and killing livestock. 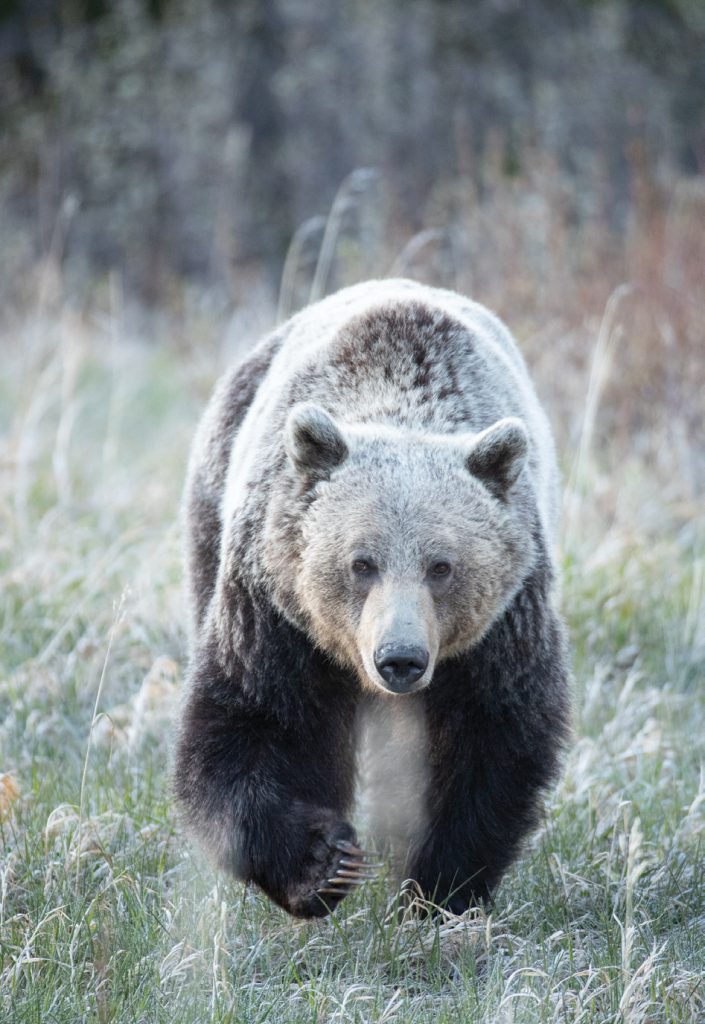 grizzly’s front claws are often prominent, as shown here, while a black bear’s are usually hard to see. Photography by Donal M. Jones.

The area around Choteau, in particular, became a hot spot. In 2018, the Montana Department of Fish, Wildlife, and Parks’ team responsible for dealing with grizzlies in the area classified 43 of the many calls they received as “incidents,” mostly bear sightings near buildings or while raiding grain spills, beehives, and similar attractants. In addition, one domestic cow was killed that year.

In 2020, the team investigated the loss of 15 cows and three sheep to grizzlies, as well as one minor injury to a local resident. For some reason, the bears kept appearing farther away from the mountains. And one observed near Big Sandy in 2020 became the easternmost Montana grizzly documented in modern records.

In June 2021, a nightmare scenario finally took place when a grizzly dragged a visitor from California out of her tent and killed her near Ovando. While details of the incident are still emerging at the time of writing, the bear was quickly located and killed. 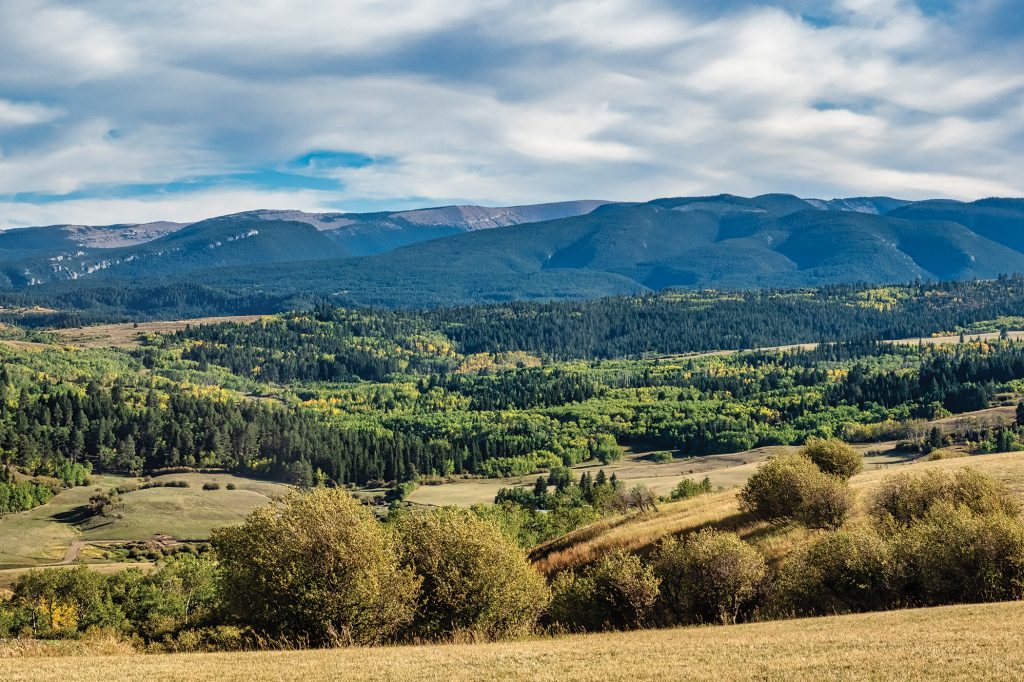 The northern slope of the BigSnowy Mountains is grizzly country once again. Photography by Donal M. Jones.

The documented presence of a grizzly in Fergus County, just a few miles from my house, means that my neighbors need to become “Bear Aware” in a hurry, as will Montanans even farther east. During the years I spent living in Alaska, I gained enough experience with bears to feel guardedly comfortable in their presence. However, I never forget that they are all potentially dangerous and always unpredictable.

Years ago, a journalist interviewed head zookeepers from around the world and asked each one to name the most dangerous animal they’d handled. The grizzly topped that list hands-down, with most respondents citing the same reason: unpredictability. Educational programs identify situations in which these bears are especially likely to be dangerous: when they’re wounded, tending cubs, surprised at close range, guarding an established food source, or investigating a new one, such as spilled grain or food left accessible at a campsite. However, avoiding these scenarios cannot guarantee personal safety, nor will following standard advice about behavior in bear country, although doing so would substantially reduce risk.

The story of the grizzly in the Big Snowy Mountains did not end with the CSI of the dead cow. Eager to learn what they were dealing with, McCardle and Schwomeyer set up trail cameras, and the images quickly confirmed that the bear was a grizzly, leading to complex management decisions. 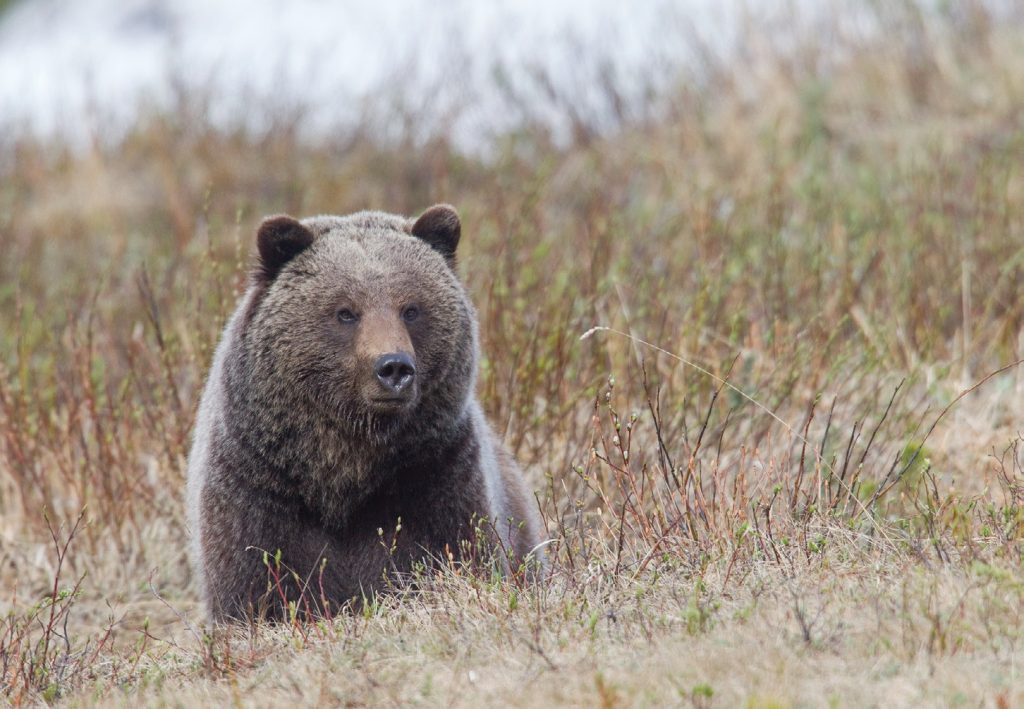 Although they are now considered inhabitants of remote mountain back-country, grizzlies were historically abundant on Montana’s eastern plains. Photography by Donal M. Jones.

Photos of the bear with another dead cow at a second nearby location established its continued presence and appetite for livestock. Since the USFWS holds final authority for grizzly management while the species remains listed, the Montana department promptly consulted them. The federal Department of Agriculture Wildlife Services — the agency that deals with predator-livestock issues — sent trained staff members who caught the animal in a foot snare and killed it. Relocating the bear was not an option, as it had killed livestock twice and wasn’t likely to stop, and the distance required to move it to suitable habitat in western Montana rendered that option infeasible.

The Big Snowy Mountains offer excellent bear habitat, and rumors of grizzly sightings there have circulated for years. Rumor has now become reality, and local residents — especially farmers and ranchers — will need to work together toward an ambitious theoretical goal that will be difficult to achieve: no livestock losses, no human injuries, and no dead grizzlies. Education will be key, and Montana’s Fish, Wildlife, and Parks department has taken that responsibility seriously.

To learn more about the issue, visit fwp.mt.gov/species/bear/bear-aware.