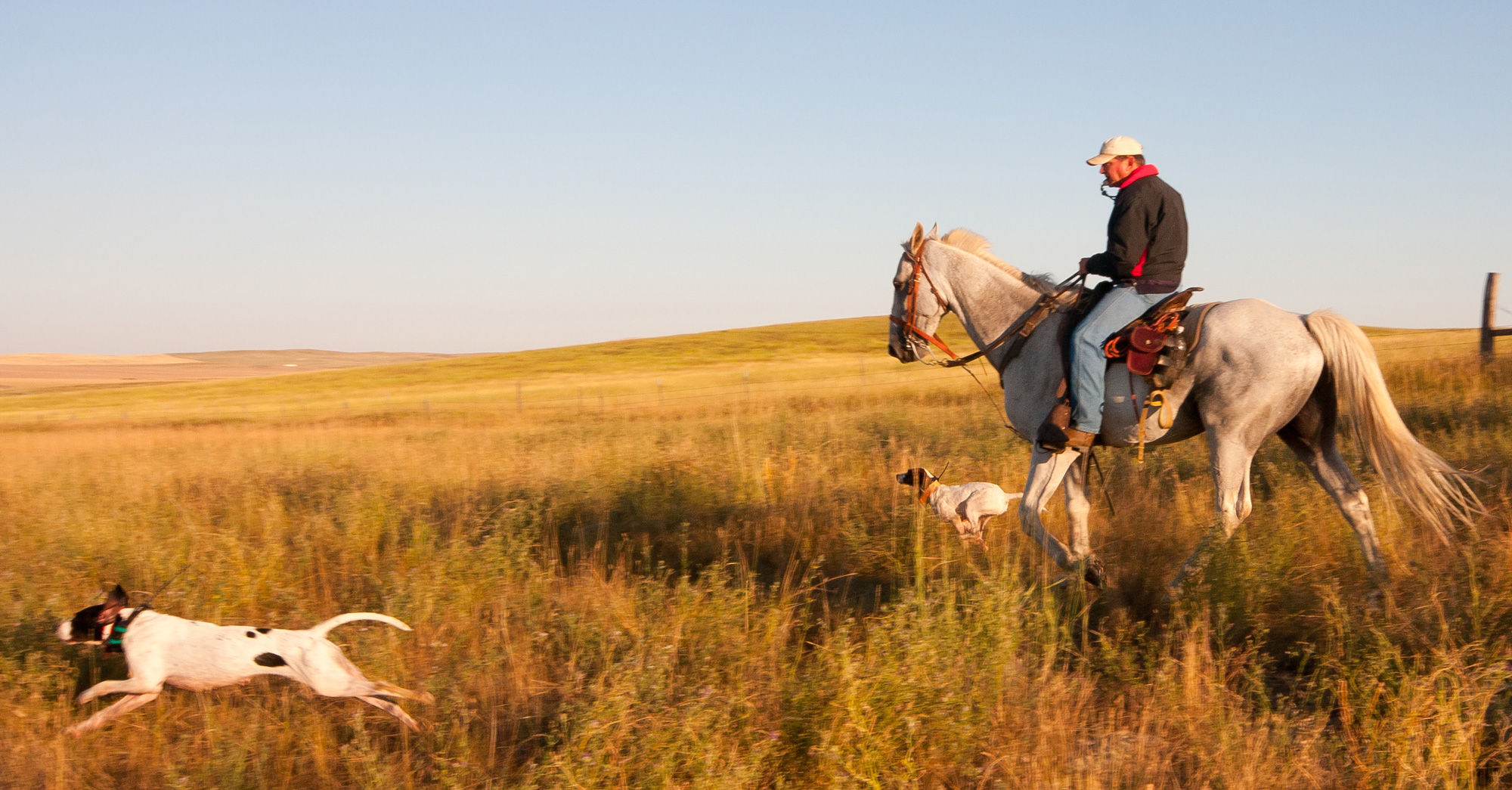 When the sun comes up on the rolling hills near Circle, Montana, the shadows are long and dew hangs on the prairie grass. The morning is cool and windless. Camp comes to life as hushed voices greet each other while saddling horses and warming up the dogs for the day’s running at the Montana Open Shooting Dog Championship (MTSDCHAMP).

Each year in late August, MTSDCHAMP, hosted by the Big Sky Field Trial Club, draws people from all over the country. The three-day event for professional and amateur field trials covers roughly 13,000 acres. Landowners grant access to upwards of 18 consecutive sections of property in the Buffalo Creek Drainage, some of the North Country’s best upland bird habitat. In 2010, the nationally sanctioned event saw 63 dogs entered and more than 50 sportsmen in attendance.

Field trialing is more than a century old and steeped in tradition. There’s talk of breeding lines, of training technique and the intricacies of handling. It’s a wild bird hunt and a dog on dog challenge. The premise is simple: Take the dog out to find the birds.

In field trialing the thrill is not in the kill, but in the hunt. At the MTSDCHAMP, trials start by 6:30 a.m. to beat the summer heat; they break during the middle of the day and start a second round of braces in the evening. To begin the day, two dogs are set to run a one-hour course. Competing against each other to find wild sharptails, Hungarian partridge and pheasant, the dogs are judged on their running style, as well as hunting technique and pointing style. The goal is to point birds, be steady to flush and shot. Speed is a factor, but ultimately finesse is the skill that distinguishes a winning dog. Handlers, judges, reporters and the gallery of spectators trail the dogs on horseback.

The anticipation at the line of each brace is heady. The dogs quiver, awaiting their handlers’ signal. Once they are off, they rush ahead, all senses engaged and on the run. Each heat covers three to five miles; the dogs search the grassy wickets, riders following.  Handlers, judges, reporters, and the gallery of spectators trail the dogs on horseback.

The birds hunker down. The grass bends in a breeze. The day warms. Suspense transfers to the air on each turn within the brace until a perfect serendipitous rhythm emerges between dog and man, man and nature.

At its core, field trials are about the synergy and simplicity of the dog and his handler. There’s more to winning than just finding birds. There’s breeding, there’s style, there’s control. In the field, all of that comes together, all the hours of training coalesce into one moment.

The dogs — sleek, muscular and keen — weave through the country, noses to the breeze. There is the feeling that in this moment every ounce of dog is doing what it was made to do. The dog’s instinct is in play, every sense is engaged. Seek. Find. Point. 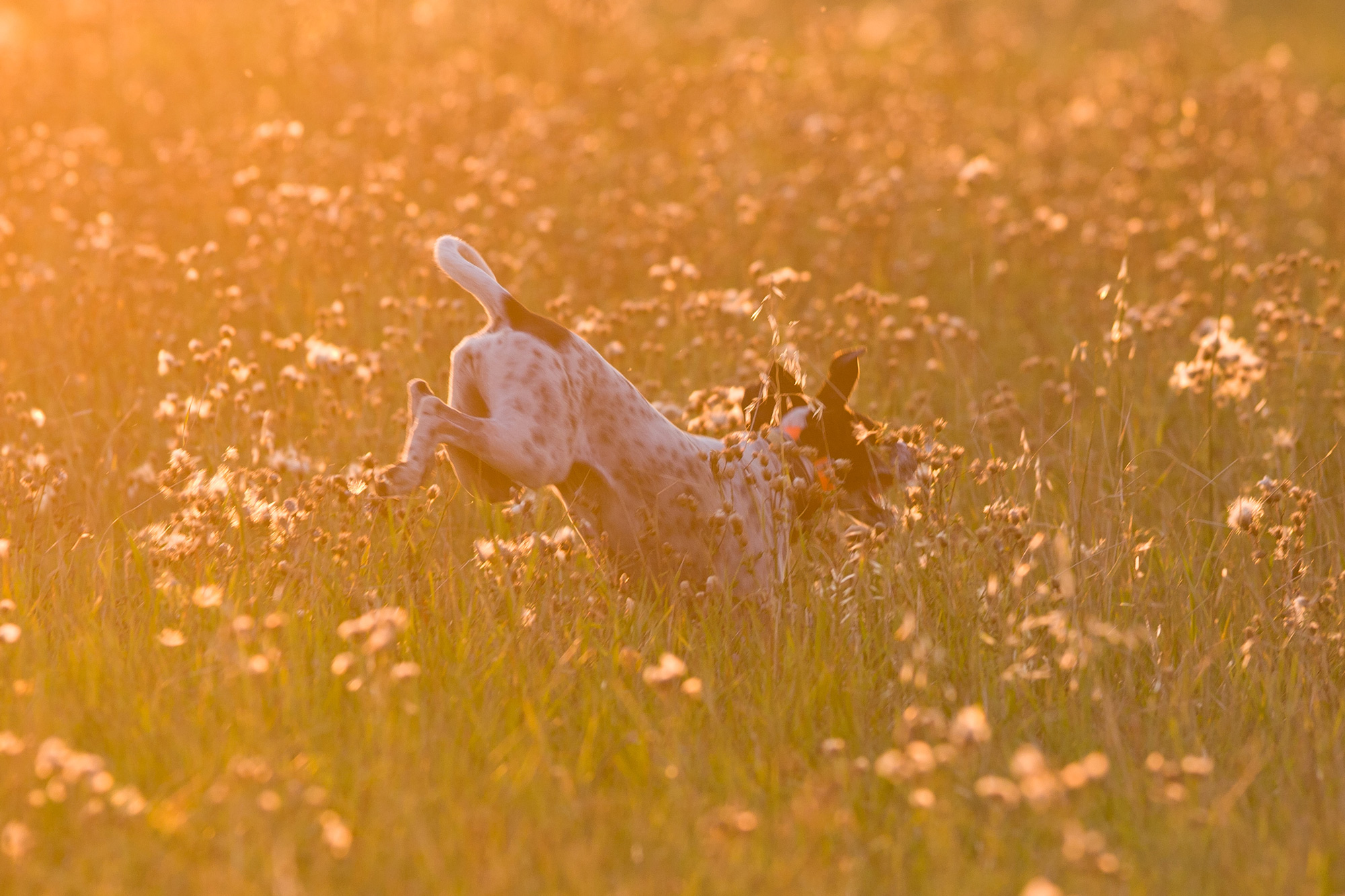 Left: Multiple time champion English Pointer Zumbro Ace breaks from the line during the third heat of the morning striving for another win. • Center: the “chain gang” of English Pointers and English Setters howl with delight while chained up in camp. • Right: Point! English Pointer Badger of Circle Kennels stand on point exhibiting the intensity and instinct of selective field trial breeding. Owned and handled by Tom Nygard. 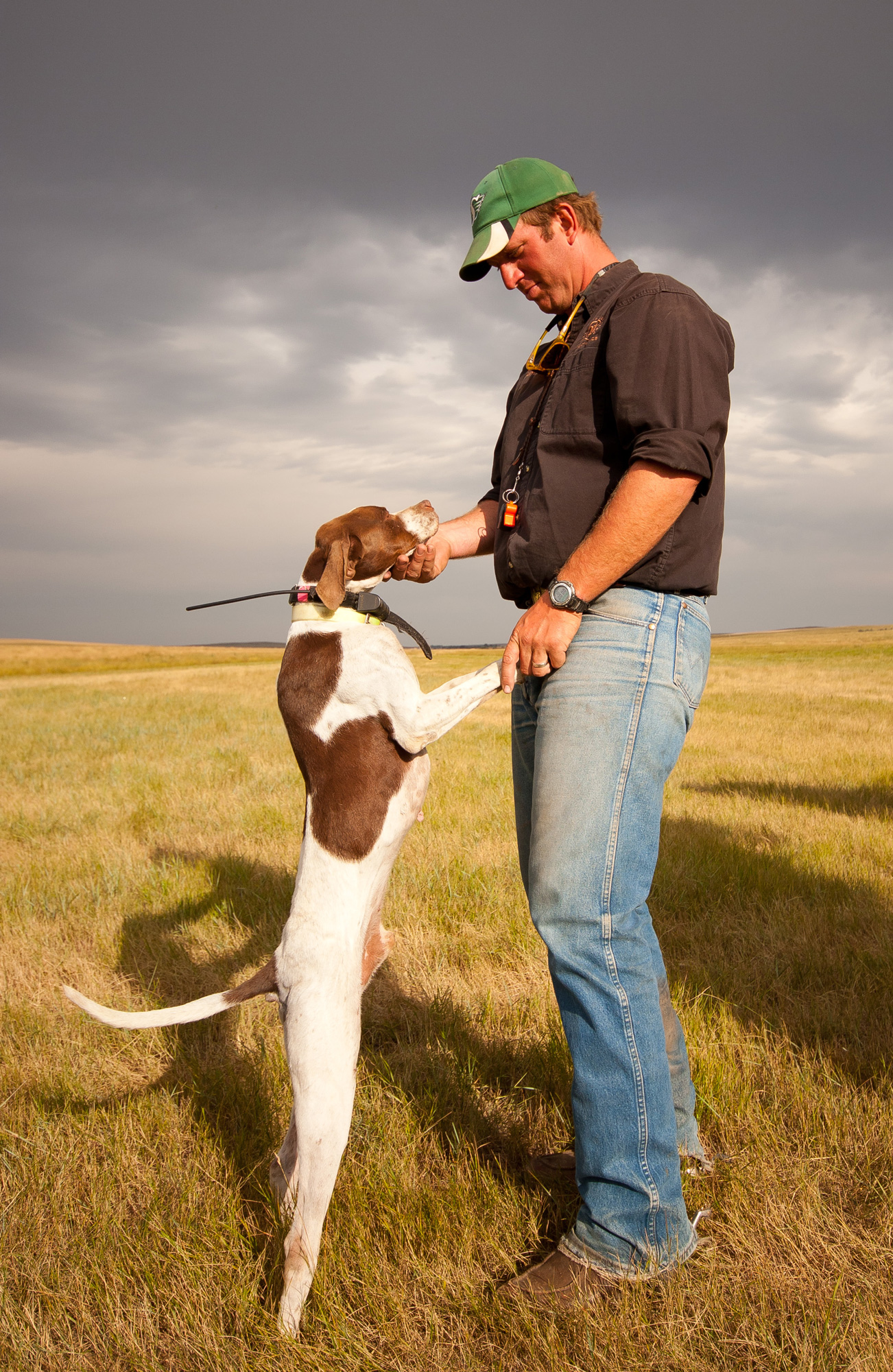 Moonrise over the prairie in eastern Montana. Dogs are fed and kenneled; horses are watered, fed and staked out; and handlers, owners, spectators and judges will soon enjoy a cocktail after a great day of field trialing. 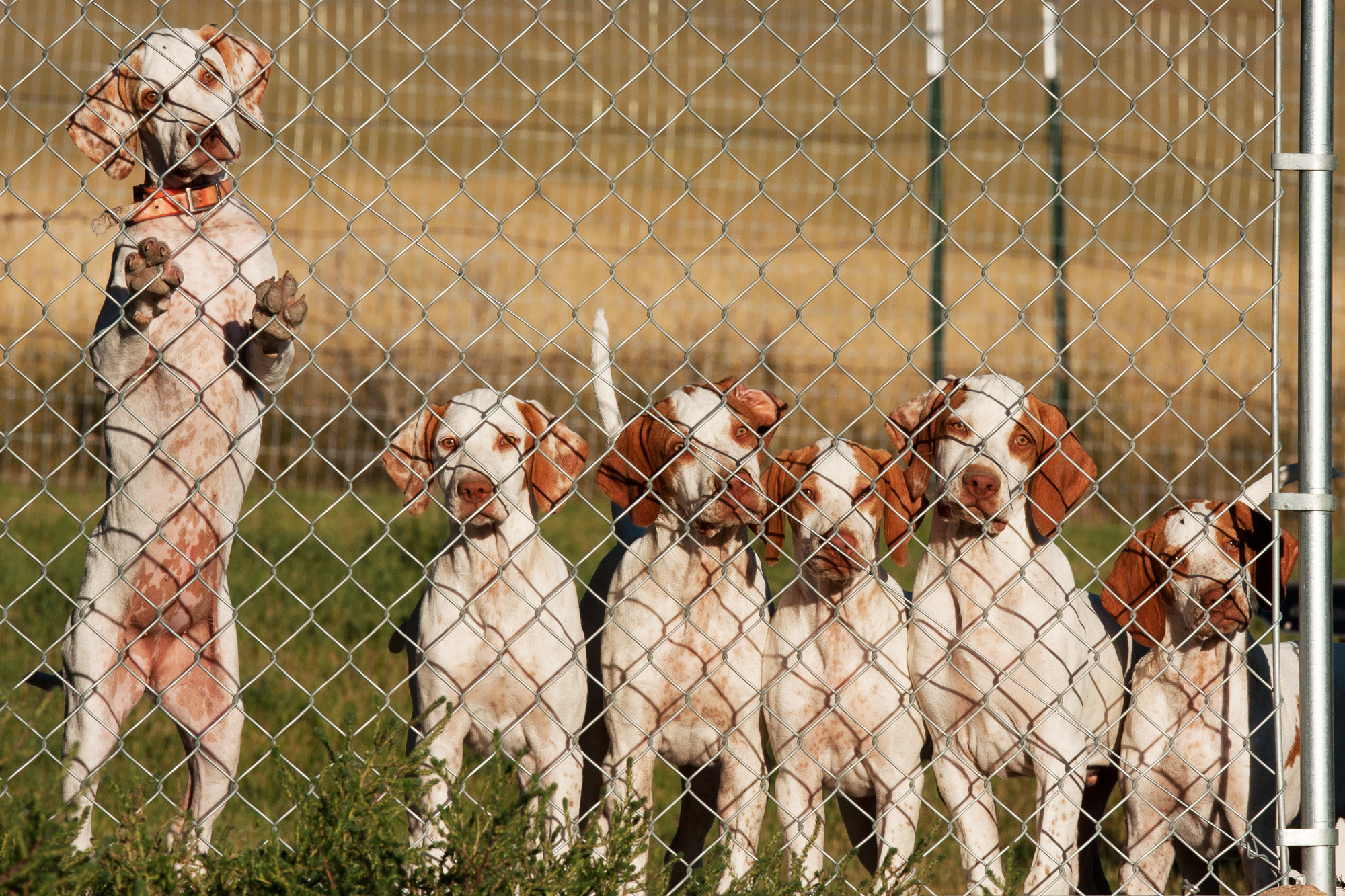 “Hopefuls in the making” seek attention at the kennel fence. English Pointer pups bred specifically for field trials by Tom and Shannon Nygard of Circle Kennels in Bozeman, Montana. 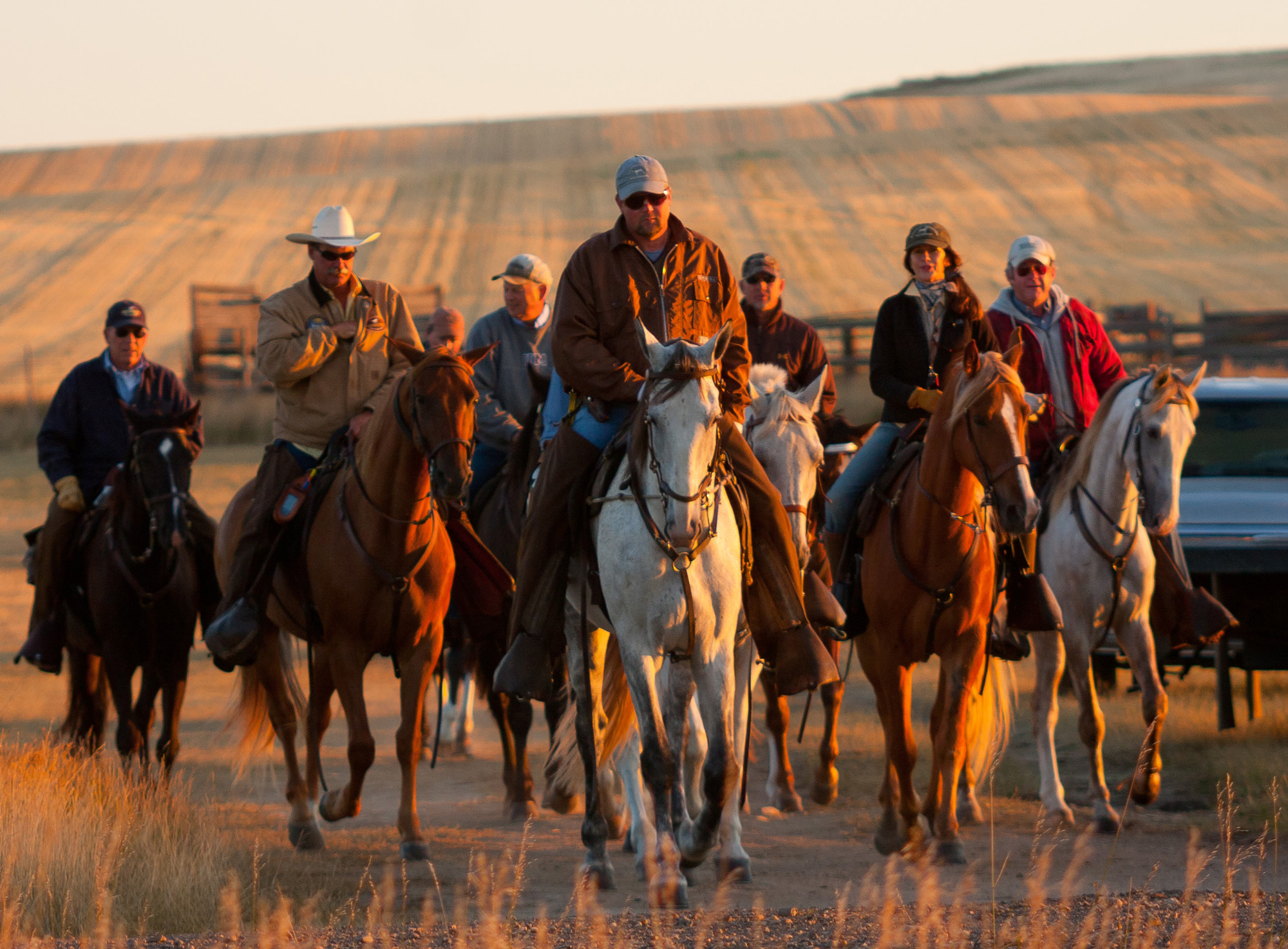 “The field” of handlers, owners, judges, and spectators upon gaited horses rides to the lines for the first brace of the morning. 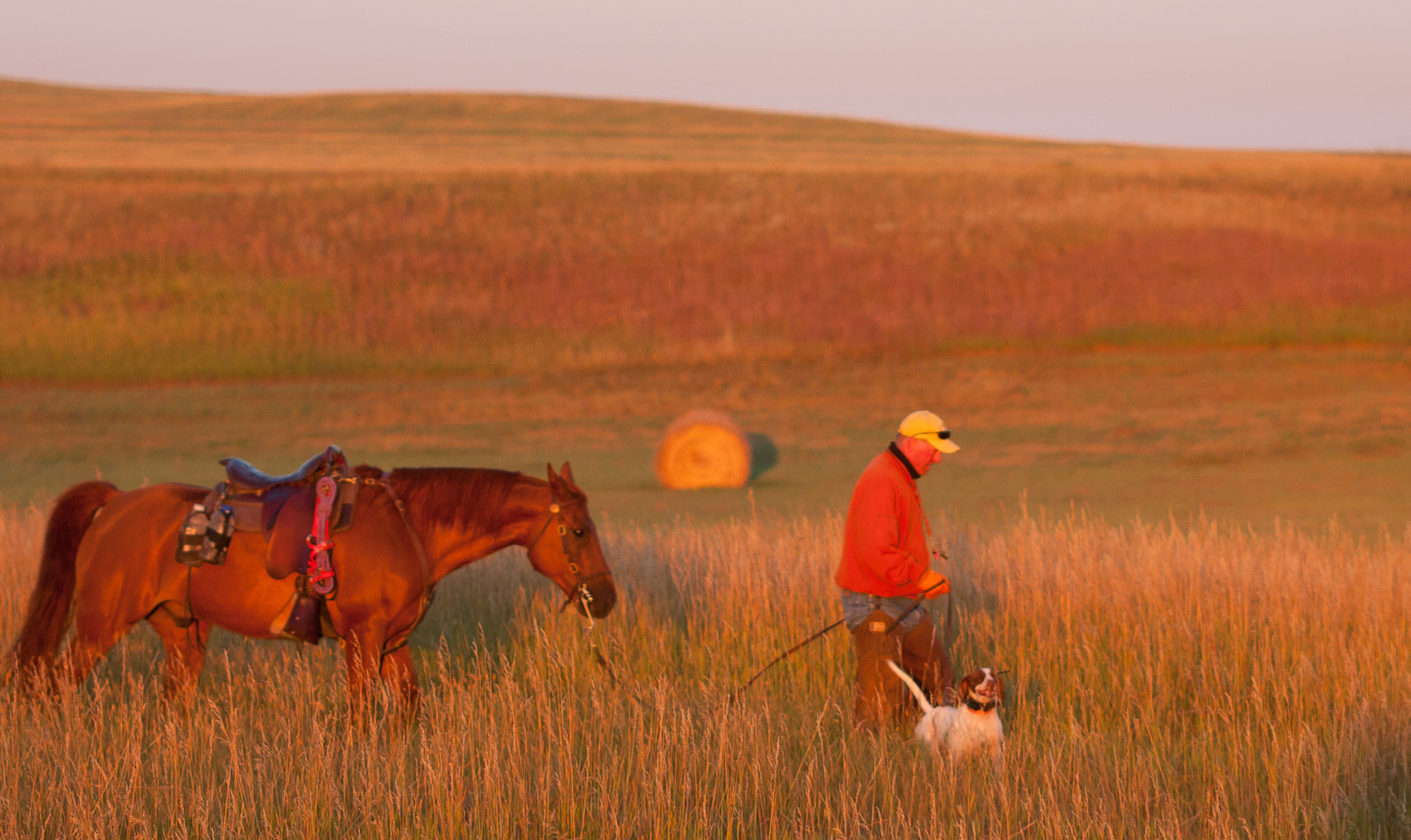 Tom Nygard brings English Pointer registered name I B Anxious, call name Badger, 2010 National Amateur Chicken Champion, to the line for the first heat of the first brace of the morning.