Bear 609 was no longer moving. A routine weekly flyover revealed the bear’s tracking collar was inactive. For Yellowstone National Park’s lead bear management biologist, Kerry Gunther, that meant one thing: an overnight trip into the backcountry. The goal would be to find the grizzly’s tracking collar or, possibly, a deceased bear.

The bear radio collars transmit signals in order for Gunther and his team to monitor and study the animals, a practice that began in 1975 around the time the grizzly was listed as threatened under the Endangered Species Act. A 5-year-old male, Bear 609, had not been a problem bear. He was caught in one of the park’s 16 research traps and collared for study. Certain signals in the pilot’s report indicated the bear was no longer active and pinpointed the grizzly’s dropped collar in the Mount Washburn area.

Entering his 27th year with Yellowstone National Park (YNP), Gunther is intimate with the habits of the estimated 600 grizzly bears in the Greater Yellowstone Ecosystem (GYE), approximately 150 to 200 of whose home range is in the park.

Accompanying Gunther into the backcountry, we don full backpacks and trek into the wilderness to search for Bear 609. When we reach the 10,000-foot saddle in the Mount Washburn range, the only interruption across the cloudless blue horizon is the billowy white plume of the Arnica forest fire. Autumn’s coolness gives way to the burnt tan undulations of the Mirror Plateau and Specimen Ridge. The Yellowstone River Canyon below deeply carves the landscape. As we continue along the edge of the ridgeline toward backcountry campsite 4E1, Gunther shares how he got into the bear business.

A Midwestern boy inspired by grizzly pioneer researchers, John and Frank Craighead, Gunther first worked as a volunteer on a black bear research project. A wildlife biologist, he earned his Master’s Degree in fish and wildlife management from Montana State University. From park headquarters in Mammoth, Gunther spends his time managing nuisance bears, monitoring the bear population and its food sources, conducting research and educating interpretative rangers and the public. He is also a member of the Interagency Grizzly Bear Study Team, a group of scientists and biologists from various agencies responsible for long-term tracking and research of grizzlies in the GYE.

“The long-term continuity of having Kerry as the lead guy for bear management for decades has maximized the success of the grizzly bear recovery efforts in Yellowstone,” said Chris Servheen, the grizzly bear recovery coordinator for the U.S. Fish and Wildlife Service. “Yellowstone and Glacier National Parks are the cleanest places for grizzly bears. It is through the strong and continued efforts of Kerry that the grizzly recovery has been a success. It is very much a team effort, but he is the axle that everyone else turns around.”

Although you’d never know it from his understated demeanor, Gunther’s expertise is sought out often. His lean build and closely-trimmed beard make his age of 52 seem unbelievable. He has been featured in numerous documentaries including Animal Planet’s “Seasons of the Grizzly.”

Yet, in the backcountry, none of that seems to matter to Gunther. He points out the bear’s calling cards of scat and tracks as we drop into the forested slopes, where the trail becomes merciless. We discover later that one guidebook rates it a “Category H”; the H literally stands for “horrible.” Devoid of switchbacks, and fully loaded with gear, we feel each step of the steep descent. Gunther, seemingly unaffected, keeps talking.

“Bears need a lot of space. They need large wilderness areas, but they are not as dangerous as most people think,” Gunther says. “They are so individual. Bears are like people; they have a lot of personality. They can be very playful and yet they can be very aggressive.”

Grizzlies are also recovering, Gunther says. “The bear population numbers and ranges show we have more bears now over a bigger range,” he adds. Advocate groups recently won a lawsuit which relisted the grizzly as threatened under the Endangered Species Act. However, Gunther believes they have met the recovery plan goals.

“Some of these groups don’t trust our science because we work for the federal government,” he said. “It doesn’t change bear management on the ground for us. Biologically, I still believe the bear has recovered; politically, I guess they have not.”

Despite the two much-covered incidences of people mauled and two men killed in 2010 by grizzlies just outside YNP, Gunther says the park itself has had “a really good year” in terms of human/bear conflicts. The 800 or so bear jams are on par with last year’s numbers. There also have not been any bear-inflicted human injuries at all this season in YNP.

Some theorize that the grizzlies killed at least one of the men because of a shortage of Whitebark Pine nuts, which are a favorite of bears who make small work of stealing the squirrels’ stashes. The lack of nuts brought them in search of food at lower altitudes where human/bear confrontation is more likely. Gunther disagrees. He says the two fatalities happened in the time of year prior to when grizzlies are feeding on Whitebark Pine nuts. In analyzing research from the past 10 years, Gunther did not see an increase in bear conflicts in bad Whitebark Pine seasons.

“There is really no way to know why the grizzlies killed the people,” Gunther explained. “Every 20 years or so the bears will kill and eat someone. It is extremely rare and unfortunate, but bears are predators.”

In his years with the park, he’s learned that the people management side of his job can be the toughest.

“People say bears are unpredictable. I say people are way more unpredictable,” he said. One year, a tourist walked up behind a grizzly cub that was turned away from him eating in a meadow and proceeded to pet the cub. The sow charged, but did not hurt the man.

Another cold morning, Gunther was tracking a female grizzly that was fishing streams around Yellowstone Lake. An overzealous tourist began filming her from a car, trapping the sow between the car and Gunther, who was being pushed toward the lake.

“I was backed up with my heels in Yellowstone Lake. The bear would look at me and then look at the car behind me, and come closer to me. I was thinking I may have to swim,” he said.

Working with his seasonal staff, Gunther also says it’s hard to predict someone’s reaction to a close bear encounter. Once, when he and another ranger came upon a bear, Gunther began backing up slowly talking calmly to the bear, a technique he says may do more to calm him than it does the bear. When he turned at a safe distance, he discovered his fellow ranger had run off.

“You never know if someone is a ‘runner’ until that first bear encounter,” laughs Gunther, who has stood his ground to “only about a half-dozen” bluff grizzly charges.

Gunther’s early work in the park included five summers stationed at the Pelican Cone fire lookout situated north of Yellowstone Lake. His years there, studying one of the highest concentrations of grizzlies in YNP, yielded a change in park policy. In observing the bears from his perch, Gunther noted that they habitually entered Pelican Valley early in the morning and were usually gone by 9 a.m. The bears reappeared in the evening. During his study, one person was mauled and a Swiss woman was devoured by a grizzly while camping alone. To prevent these human/bear conflicts, Gunther suggested barring backcountry camping in the valley and limiting hiking to the hours of 9 a.m. to 7 p.m. That was back in 1989, and since then, no bear incidents have occurred in Pelican Valley.

Gunther’s contribution to these and other evolved bear policies are a far cry from the park’s early history, which not only allowed bears to feed from trash dumps but set up grandstands to encourage visitors to watch. Closure of the last dumps in 1970, prohibiting hand-feeding of bears and the addition of bear-proof garbage cans proved successful. The year all the dumps were closed, the number of bear-caused human injuries plummeted from 448 incidents the previous year to just 12.

“Kerry has been here from the start of a new bear management era in the early 80s and has been making improvements to the park’s program, which has been a remarkable success,” says Jeff Brown, director of education for The Yellowstone Association.

“In 2009, we didn’t have to trap a single nuisance bear and there were no human-caused bear deaths. It was the slowest year in 27 years,” Gunther notes.

Years of research support Gunther’s closely held belief that keeping bears close to their natural food sources and habitat is the best way to ensure their survival. Elk are the bears’ primary food source, but they also eat moths by the thousands, Whitebark Pine nuts, cutthroat trout and various vegetation.

Trapped bears are collared for 12 to 18 months. There are several types of collars, the most advanced type has a GPS with Spread Spectrum Technology that records the location of the bear every half-hour and can be downloaded during a flyover. Gunther uses the data to retrace the bears’ range, study their food sources and habitats. The collars are programmed to release and drop off automatically on a certain date and time. Collars can come off a bear by accident because a bear’s neck is so much larger than its head.

But as we are learning, collar collections haven’t always proven easy. One fall, a bear lost his collar in the bottom of Yellowstone Lake. With the lake frozen over, Gunther and another ranger used a canoe to skate over its surface using rakes to pull themselves along. Once they located the collar below the ice, they punched through and retrieved it.

On our own collar-tracking mission, after a warm breakfast, we set out to track Bear 609’s collar or worse, Bear 609. Gunther assembles the telemetry equipment, which looks like a slightly advanced version of an old “rabbit-ear” television antenna to pick up the signal. Surprisingly, there is only silence. Using the pilot’s GPS coordinates, we bushwhack north straight up the mountain through a forest ripe with Whitebark Pine trees. We break through a meadow where the coordinates indicate the collar was dropped. Gunther raises the equipment, but still gets no signal.

Gunther and his team retrieve about a dozen collars a year. The technology is so dependable that it is only about once a decade when the collar is not where the pilot has indicated. This appears to be one of those times. This particular collar is different than the others — a slow signal indicates all is fine and a fast signal means no movement. Gunther speculates human error.

Somewhat dejected, we painstakingly hike out. At about 9,900 feet on the other side of the mountain, Gunther again spans the horizon with the telemetry. A slow, steady, distinct ping answers back. As we scan the slopes with binoculars in the direction of the signal, we spot a bear rumbling down a far off hillside, but it enters the trees too quickly to see if it has a collar. Grizzly Bear 609? 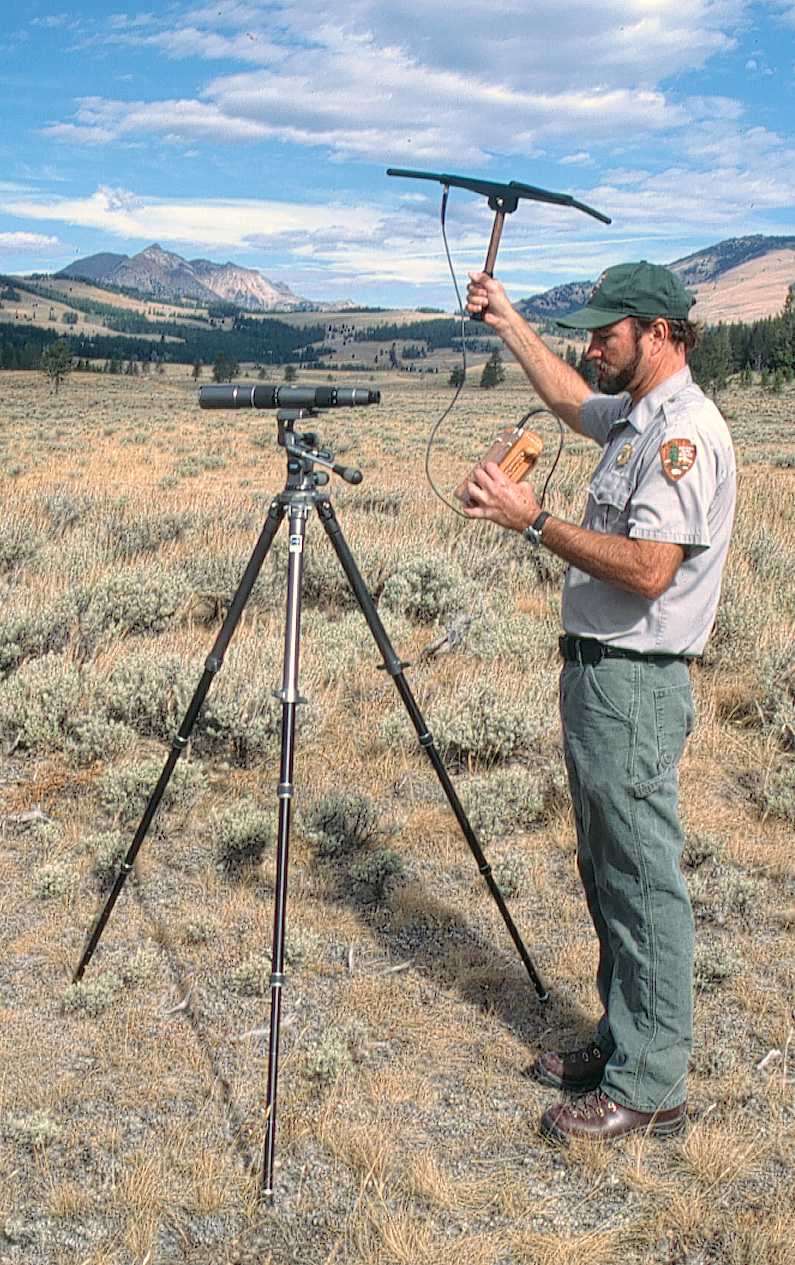 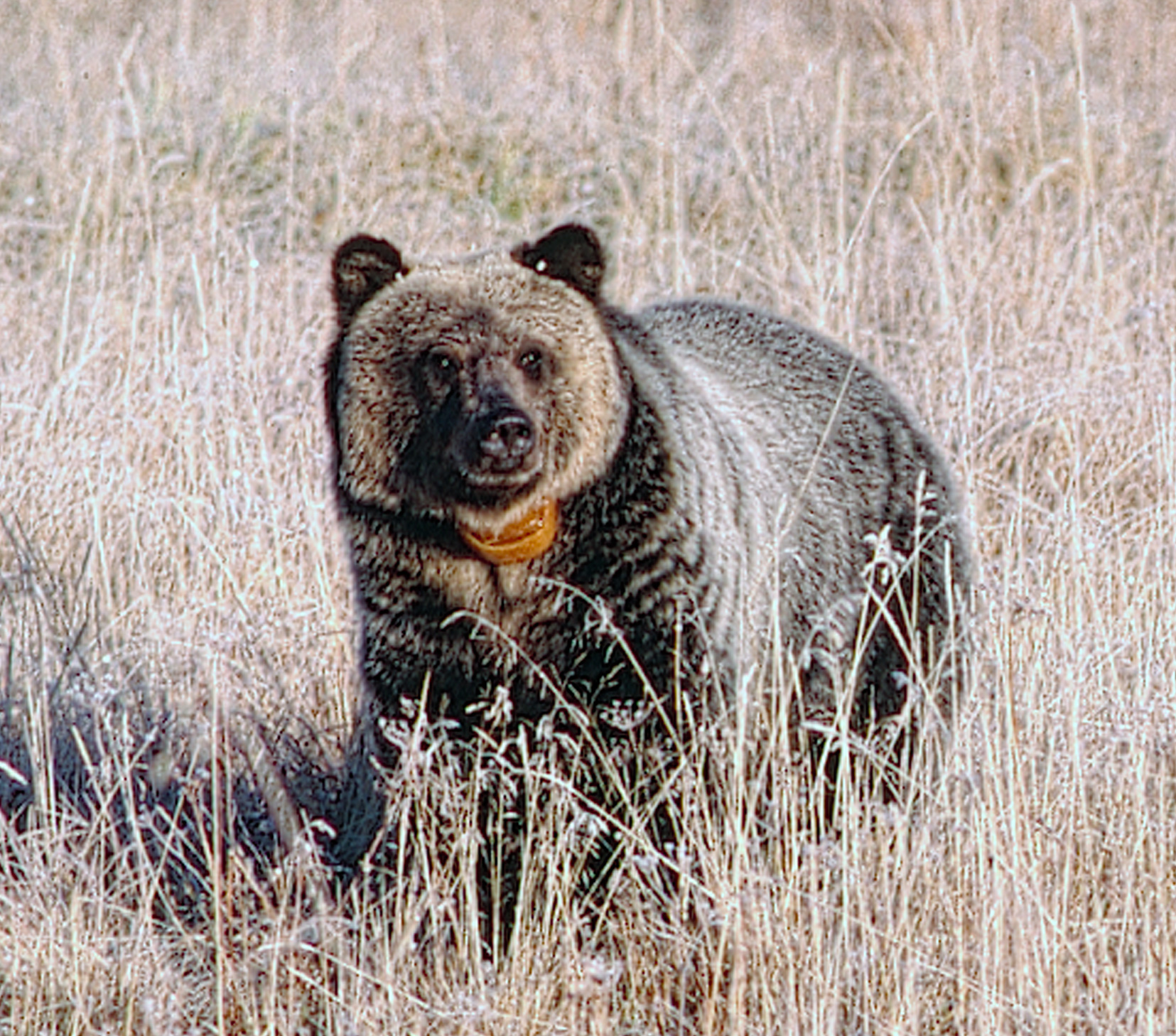 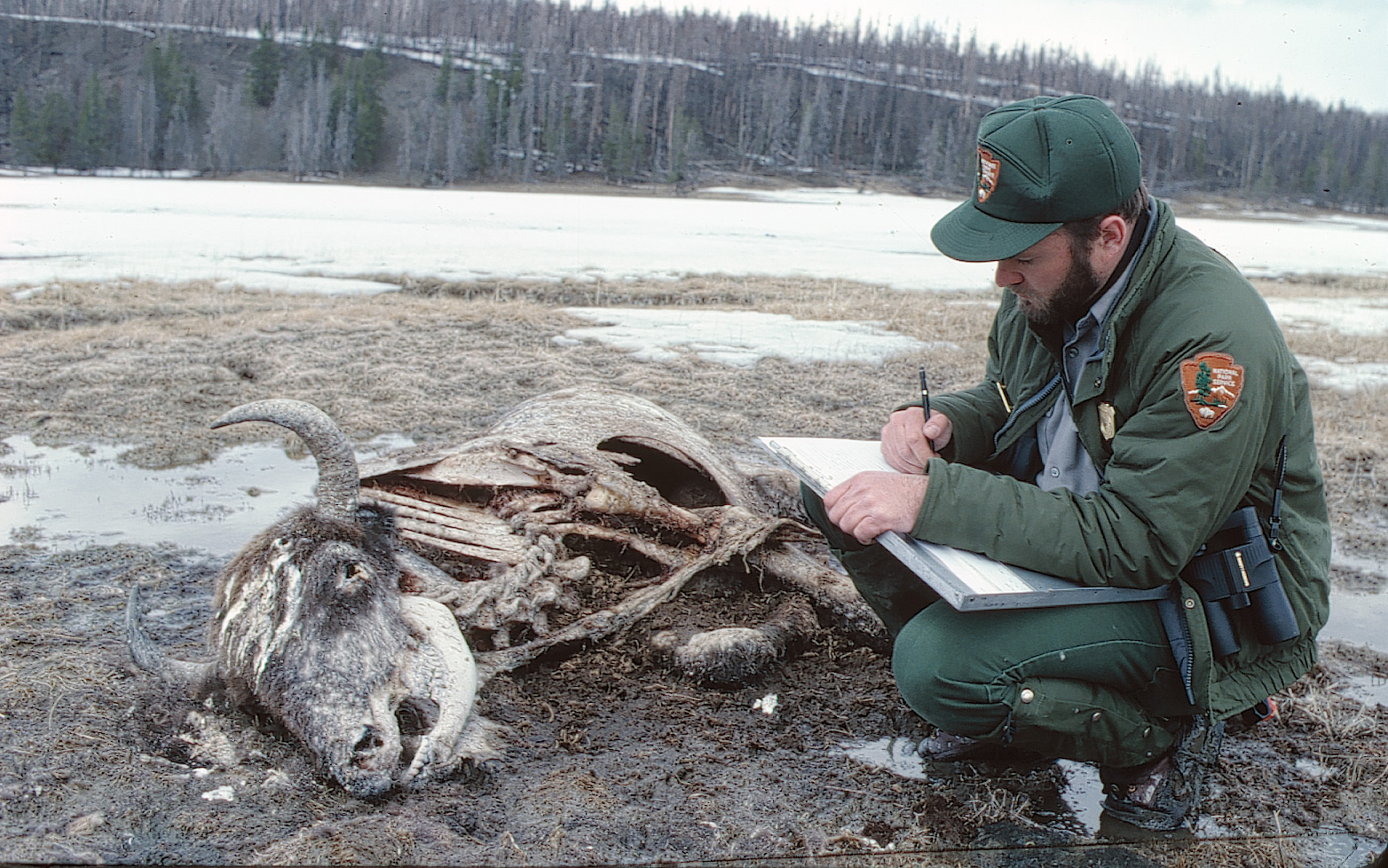