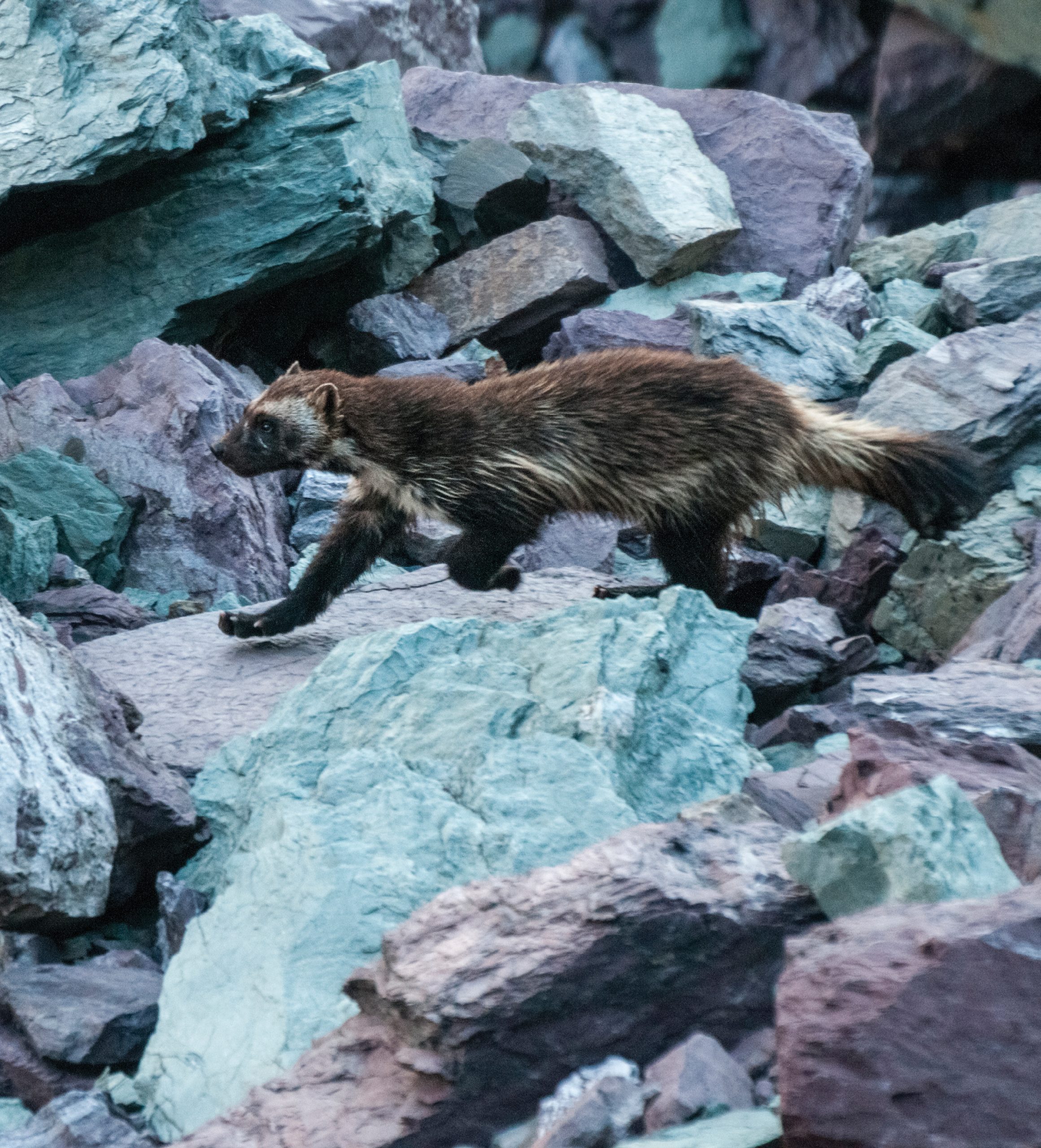 02 Jun Ghosts of the Forest

ONE AUTUMN DAY, I WAS SITTING ON A RIDGE in the foothills of the Alaska Range glassing for caribou when I spotted a strange, dark form scampering across the tundra a hundred yards away. Despite my familiarity with wildlife in Alaska, I’d never seen anything quite like it before. My immediate impression was that it was a bear cub, but it was too close to the ground, and it didn’t run like a bear. Then a light went on, and I realized I was looking at a wolverine. As soon as I picked it up through my binoculars, the distinctive light-colored fur along its flanks confirmed this realization. Despite the amount of time I’d spent in Alaska’s bush by then, this was the first wolverine I’d ever seen. These events took place nearly 40 years ago, and I haven’t seen one since, in Alaska or anywhere else. 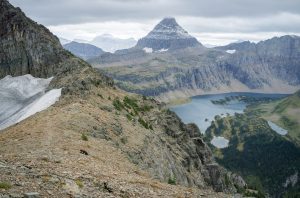 The closest I’ve come to seeing a wolverine in Montana is a set of tracks I came across one day in the Crazy Mountains. Had it not been for perfect tracking snow, I might well have missed their significance. As usual when confronted by an odd track in the field, I began by composing a list of what it was not: a member of the cat family, a bear, a wolf. The tracks looked as if they had been left by a skunk on steroids. As I followed them, I noted alternating sets of three and four footprints, and finally the paired prints of a loping mustelid (more on that family of mammals later). Once again, a light went on.

Like many species that are adapted to extreme cold, wolverines enjoy a circumpolar distribution, from Scandinavia, across northern Russia, and on to Alaska, Canada, and the most northern tier of the Lower 48. Despite their wide range, there aren’t a lot of them anywhere. That’s just the nature of the beast. Solitary and highly territorial, wolverines don’t get along well with each other, or much of anything else. They also cover a lot of ground, with males typically occupying home ranges that are more than a hundred square miles in size. During one Alaska study, biologists “lost” a collared male wolverine only to have him turn up over 200 miles away on the Canadian side of the border. 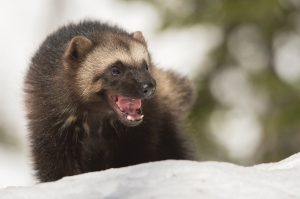 Just months earlier, this wolverine kit was born in a snowy den, with pure white fur.

For an animal that’s so secretive and sparsely distributed, the wolverine has contributed more than its share to the lore of the North. Some of its reputation for ferocity has been objectively verified while the rest remains in the realm of folklore, no unusual occurrence when lonely, isolated people gather in front of a wood stove and share a bottle. It’s scientific name, Gulo gulo, is derived from the Latin root for “gluttony,” which observations of the animal’s behavior confirm as appropriate. However, separating fact from fiction in early accounts of wolverine behavior proves difficult, and biologists of the day weren’t much help. One 19th-century zoologist reported that wolverines killed caribou by attracting them with fodder, leaping down upon them from trees, and sucking the blood from their bodies until they died. I don’t think so.

However, they certainly did occasionally destroy cabins and kill large ungulates. Reliable observers have reported wolverines killing caribou, wild sheep, and even moose. In Scandinavia, they prey on domestic sheep and reindeer often enough that the governments of Sweden and Norway have established programs to compensate herdsmen for losses. Nonetheless, wolverines are more efficient as scavengers than as predators. One study from the Western Arctic analyzed the stomach contents of wolverines and found a truly remarkable array of remains, the most abundant of which came from caribou. However, the highest percentage of caribou meat was found when caribou numbers were at their lowest, usually as a result of hard winters or heavy predation by wolves. Like prairie wolves in the days of Lewis and Clark, wolverines weren’t killing large mammals so much as they were cleaning up the plate after nature had done the killing for them. 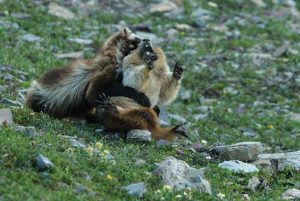 A wolverine takes down a hoary marmot in a struggle that lasted minutes as they both wrestled and rolled down the slope.

As a general rule — or at least as a theory of mine — I’ve noted that the number of common names that are attached to a species is directly related to the animal’s scarcity and reclusiveness. The scarcer the creature, the more names it seems to have. This is certainly true of the mountain lion (cougar, puma, catamount, among others), and it applies to the wolverine as well. Alternative names for the wolverine include carcajou, devil bear, and skunk bear. The latter is particularly descriptive, for like mink, martens, and other members of the mustelid family (which included skunks until a recent reclassification), wolverines eject foul-smelling secretions as a territorial marker. Spraying a food source like an animal carcass with their musk keeps other scavengers away, and after a cabin break-in, the odor can reportedly render the structure uninhabitable. 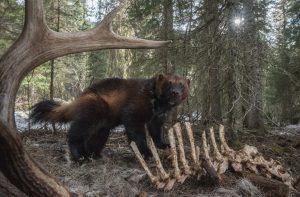 If there is a typical wolverine sighting this is it: A small brown dot moving across a rugged landscape. In a rare occurance, this wolverine ran just feet away from the photographer before heading over the pass.

With this brief portrait of the species behind us, let’s turn our attention to the wolverine in Montana. While there aren’t many of them here, the Treasure State is significant as one of the wolverine’s last bastions in the Lower 48. I spoke recently with Bob Inman, Montana Fish, Wildlife & Parks’ Carnivore-Furbearer Program coordinator, and he confirmed the difficulty of surveying a species as secretive and sparsely distributed as the wolverine. But he did offer an informed estimate of the number living in Montana at 200 to 300.

In addition to Montana, three other states in the Lower 48 — Idaho, Washington, and Wyoming — have established wolverine populations, and several years ago Inman participated in a cooperative study to survey the species across this range. Since they couldn’t count wolverines from the air, the biologists divided areas of suitable habitat into grids and installed trail cameras that could at least establish the presence of a wolverine in each area under study. 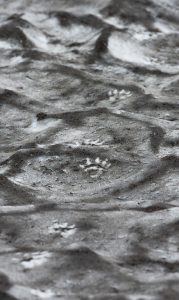 Researchers tracked a wolverine to this whitetailed deer carcass, and the photographer set up a couple of cameras to see what animals were using the site. Aside from the wolverine, Canada lynx would also come by to feed on the leftovers.

Every segment of the Montana grid in the Greater Yellowstone and Northern Rockies ecosystems recorded at least one wolverine. While the Montana population estimate previously cited may not sound like a lot of individuals, it exceeds that of any other state — with the possible exception of Idaho. It seems fair to call Montana the last stronghold of the wolverine south of Canada.

Wolverine management in Montana has had a checkered past. By the early 1900s they had been mostly extirpated from the state, although they slowly began to repopulate naturally. Prior to the mid-1970s, they were treated as varmints, with no regulation on their take. Between 1973 and 2011, they were classified as furbearers with an annual quota of five animals divided among different areas in Western Montana, and harvests prohibited in isolated island mountain ranges. While some observers criticized even this limited take as a step backward for the species, it at least allowed for management of their harvest in a regulated manner. No wolverine trapping or hunting has been allowed since 2011.

Following their elimination from the Lower 48, wolverines began a comeback on their own, with no efforts at reintroduction. Recently, isolated but credible evidence of wolverines has been reported from Colorado and California for the first time in a century, and it’s possible that Montana wolverines might someday be transplanted to these areas to aid in their repopulation. 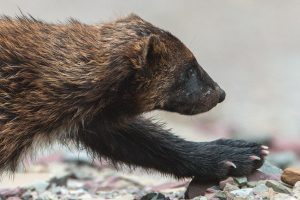 Wolverines have oversized paws, which act like snowshoes during winter, allowing them to move efficiently over mountain landscapes.

Despite all the anecdotal tales of wolverines behaving badly in the Far North, I never heard a single reliable report of cabin destruction or similar misdeeds when I lived in Alaska. And Inman reports a similar track record in Montana. While he remembers one wolverine being shot in a chicken coop in Northeastern Montana (not typical wolverine habitat), and another being removed from the city of Billings, he knows of no instances of property destruction or livestock predation by wolverines in the state. He attributes this record of good behavior to an abundance of marmots and other favored food sources.

What does the future hold for Montana’s wolverines? Currently, no hard science exists to document whether their numbers are stable, decreasing, or increasing, although their recent appearance in places they have not inhabited for years provides grounds for optimism. We’ll know a lot more in 2021, when biologists conclude a five-year follow-up to the population survey described earlier. Certainly, the continued presence of large undisturbed tracts of suitable forest habitat will remain crucial to the wolverine, not just in Montana but across its wide boreal range.

Meanwhile, chances are that most Montanans will spend their lives without ever seeing a wolverine in the wild, not because the animals are being extirpated once again but simply because they are wolverines. So, keep your eyes open every time you venture outdoors. You might become one of the lucky few.