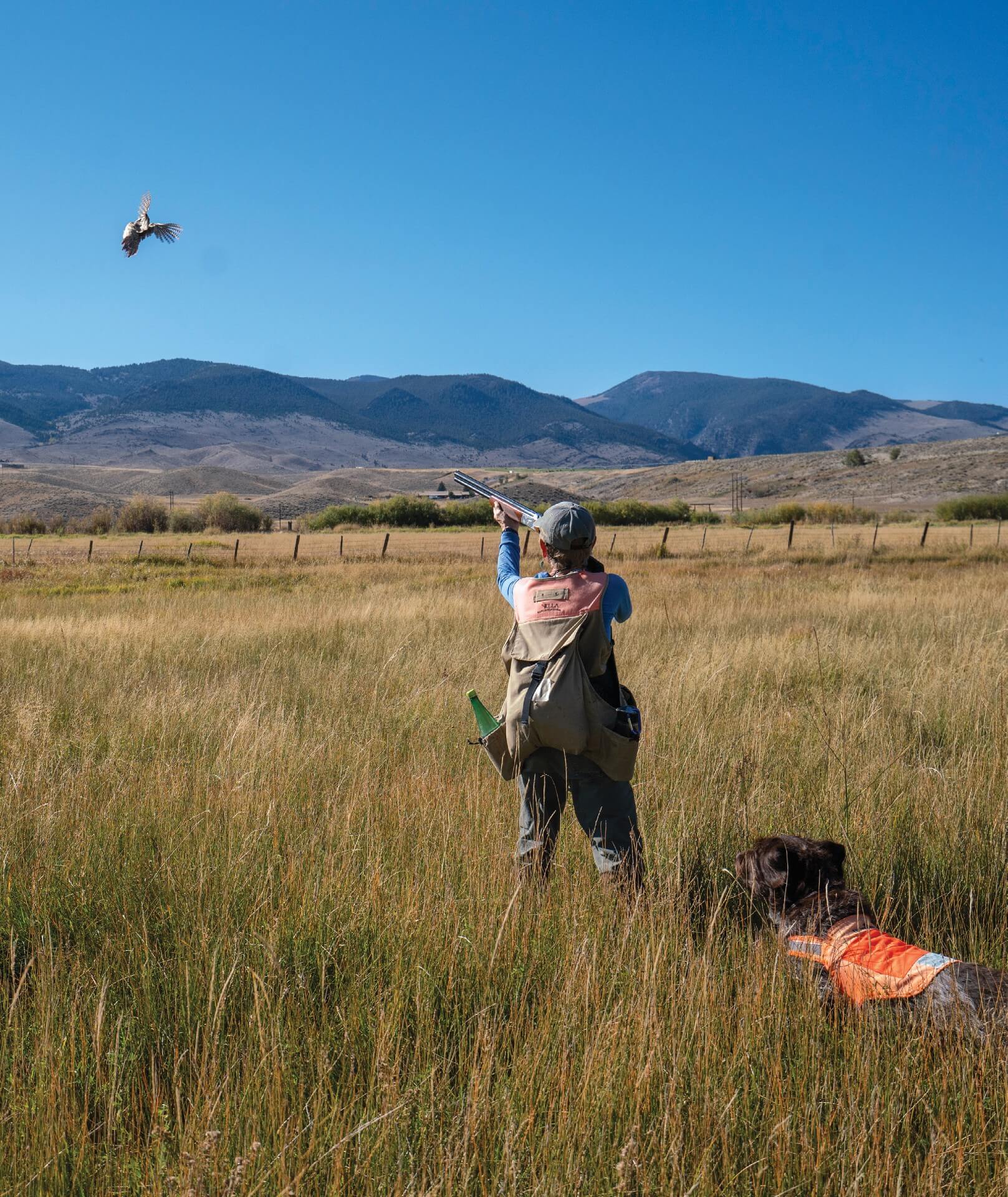 Tawna Skinner shoots a ring-necked pheasant that her wirehaired pointing griffon pointed on a hunting preserve near Dillon, Montana.

Dyna found the ring-necked pheasant and pointed. She froze. Even her tail stopped moving. Brillo stopped in her tracks, too, honoring Dyna’s point. As both dogs held point, Anita Andrus walked forward and flushed the bird. Brillo and Dyna watched it rocket up from the grass and, as the bird rose to the sky, Tawna Skinner raised her shotgun to shoot.

Skinner and Andrus, accompanied by their dog, Dyna, were hunting with their friend Robin Strathy and her canine, Brillo, on a shooting preserve near Dillon, Montana in September 2021. Dyna and Brillo are wirehaired pointing griffons (stress on the final syllable [grif-FON]). But, don’t let the “pointing” in their name fool you; these dogs do it all. They find birds, point them, and then retrieve dead or wounded birds after hunters flush and shoot. These dogs are amphibious, pointing and retrieving both upland game birds (such as pheasant, chukar partridge, and quail), as well as waterfowl. 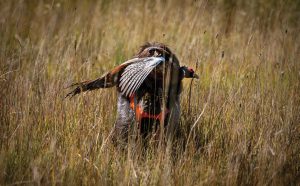 Though each of the hunting gals followed a different path to the shooting preserve on the Big Hole River, their paths are now converging with many others, as women rediscover their ancient hunting roots and rewrite the story of hunting in the Northern Rockies.

Skinner grew up hunting birds in southern Idaho sugar beet fields with her father, uncle, and grandfather. Her job was to walk ahead of the older generations to flush birds — and to then fall to the ground out of the way of the shooting. Her uncle and grandfather relied on the natural abilities of their hunting dogs and gave them no formal training. Skinner remembers dogs that “people were screaming at, that came back only when they were ready to, that didn’t retrieve, or only part of the time, and that sometimes chewed the birds up.” 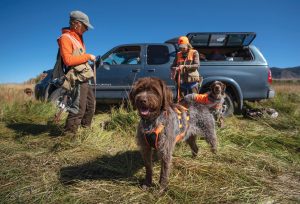 While playing in a softball tournament in college, Skinner saw a dog that changed her life: She’d never seen one like it. “Finally, I got up my courage, went over, and asked, ‘What kind of dog is that?’” It was a wirehaired pointing griffon. “I looked into those eyes and I was absolutely mesmerized. I said, ‘When I get a dog, that’s the kind of dog I want.’”

Wirehaired pointing griffons are just one of the versatile hunting breeds developed in Europe to provide all the canine help a hunter needs in one dog. Similarly inclined breeds include German shorthaired and wirehaired pointers, Vizslas, pudelpointers (a cross between German hunting poodles and English pointers), and Weimaraners.

In 1983, after college and a move to Salmon, Idaho, Skinner went “just to look” at a litter of wirehaired pointing griffon puppies. Looking turned into buying, and a puppy she named Chelsea came home with her. “I had to take the next day off of work to build a kennel,” Skinner says.

Skinner and Andrus started training Chelsea with the help of a six-weekend course for hunting dogs in Idaho Falls, Idaho. When they saw fully trained gun dogs at a North American Versatile Hunting Dog Association (NAVHDA) utility test near Ronan, Montana, Skinner vowed that all her dogs would be as skilled. Utility tests evaluate a dog’s ability to search for, find, and point birds for their hunting partner, and to track and retrieve shot game on land and water. “It’s an amazing experience to have dogs that are well trained to hunt behind. You don’t have to yell at them, you can ask them to do something and they go do it,” Skinner says. 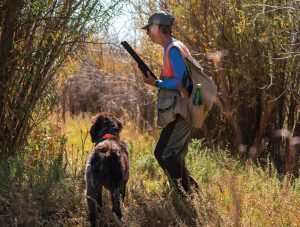 Tawna Skinner prepares to ﬂush a bird that Dyna is pointing.

In 2020, Dyna, who found the pheasant at the Dillon shooting preserve, passed her utility test with flying colors. The ultimate test of a dog’s skills — and its obedience to and cooperation with its handler — is NAVHDA’s annual invitational test. Less than half of the dogs participating in this event perform well enough to earn the title Versatile Champion and add “VC” before their names. All of Skinner’s dogs have passed the utility test; Dyna is her first dog to reach the invitational, which was held in September 2022.

While a dog changed Skinner’s life and put her on the path to hunting, a bird altered the direction of Strathy’s. After growing up in a non-hunting family in Minnesota, she studied geology at the University of Montana. Strathy accompanied a college friend when he hunted with his beautiful English setter, “for the exercise and to be outdoors.” Her motivation changed the day her friend “miraculously missed” a pheasant. The bird flew right past Strathy. “I probably closed my eyes and shot, and when I opened my eyes, the bird fell out of the sky,” she says. “I was shocked and hooked.”

After Strathy moved to Great Falls, Montana, she got her first dog, a German wirehaired pointer, which she trained with the help of a local sporting dog club. Later, she met Skinner and Andrus and started hunting with her own griffons, creating “Gals with Griffons,” as the women call themselves. The third gal, Andrus, started hunting because she wanted to participate in the activity with her friends. 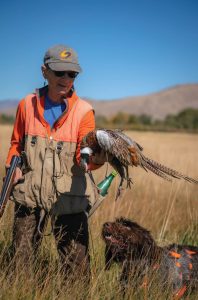 The pheasant that the gals and their griffons harvested near Dillon in 2021 was a pen-raised bird released on a shooting preserve along the Big Hole River. Preserves are private lands that landowners — who are licensed by Montana Fish, Wildlife & Parks (MT FWP) — stock with birds for hunting. Ring-necked pheasants, introduced from Asia, are the most popular upland game bird in Montana. The following day, the gals hunted chukar partridges, also native to Asia. Shooting preserves range from day-only operations that are open to the public for a fee, to those providing lodging, meals, and other outdoor activities to members.

For nearly 20 years, Skinner, Andrus, and Strathy have hunted birds each fall in eastern Montana. On these excursions, they hunt private ranching and farming land through the state’s Block Management Program. Over 7 million acres of private land are available through this MT FWP program, an area nearly as large as Gallatin, Madison, and Beaverhead counties combined. 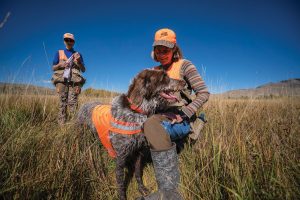 Though both ancient Greek and Roman hunting deities were female — the goddesses Artemis and Diana, respectively — men have been the primary hunters for millennia among mortals, and still outnumber women hunters in the United States by about nine to one. But in the early 21st century, women are heading to the forests and prairies to reclaim their classical role as hunter. Gun and gear companies are developing equipment and clothing that fit and perform well for women, and wildlife conservation groups are welcoming women into their communities and work.

Courtney Bastian claims no divine connection, preferring the moniker Bird Dog Babe. Bastian is an adult-onset hunter and new Montanan. “I was 26; I took the hunter safety class and found myself surrounded by 12-year-old boys,” she says. Bastian and her husband, William, moved their dog-breeding and -training business, four horses, five goats, and two kids to Montana in late 2019.

When the COVID-19 pandemic put social gatherings on hold, Bastian despaired of meeting other women interested in hunting and dogs. Bastian and another hunter started Her Upland Podcast as a way to connect with like-minded women. Their listeners expressed interest in affordable training events for people and their dogs, so Bastian got to work. Her first Grouse Camp, held in 2021, was such a hit that she planned another for the fall of 2022. 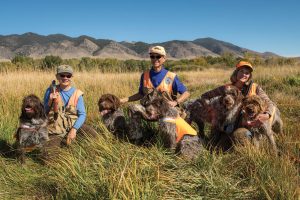 Women of all ages have joined the Gals with Griffons — and their wirehaired pointing griffons — in the ﬁelds and forests of the Northern Rockies over the nearly 20 years the group has been hunting together.

In June 2022, 34 women and their dogs gathered in Montana’s Blackfoot Valley for the first ever Women’s Pointing Dog Training Camp. Bastian welcomed students, dogs, and instructors — from Alaska to Tennessee to southern California — for a long weekend of learning in wild western Montana. The youngest human participant was 15, the oldest was 72. But the youngest student had more experience: She started helping her dad train dogs when she was 10; the oldest started when she was 69.

Canine students learned to track birds, retrieve ducks, point patiently, and pay attention to their handlers. Human students learned how to communicate with their dogs to help the canines improve their skills, and how to clean and prepare birds for dinner. Participants slept in vehicles or pitched tents inside an electrified bear fence. The birds used for training joined the tenters in the enclosure and provided a soothing evening chorus — until they were drowned out by rolls of kettle-drum thunder and pounding rain.

Saturday night dinner included a variety of bird dishes, plus wild Alaskan treats brought by one of the students: caribou jalapeño cheese sausage, Sitka black-tailed deer Polish sausage, and Copper River smoked sockeye salmon spread. The meal and associated beverages had instructor Bridget Nielsen reminiscing: In part, it was enjoying grouse at the dinner table that sparked her entry into hunting.

Nielsen came out of college focused on endangered species conservation and wasn’t particularly interested in hunting. She soon found herself working for the U.S. Fish & Wildlife Service (USFWS) in Nevada, where many people hunted. “I was surrounded by biologists who loved to hunt big game.” She hunted with a friend, helped him train his dogs, ate ruffed grouse in British Columbia, and became more and more intrigued. When “the little dog I got to go hiking and mountain biking with started pointing tweeties,” Nielsen says she was smitten. “Next thing I know, I have pigeons and I’m teaching this dog to point. It was a transformational moment. You think, ‘Wow! Look what this animal can do!’ And, suddenly, you dive off the deep end. I dove in and have kept on swimming.” 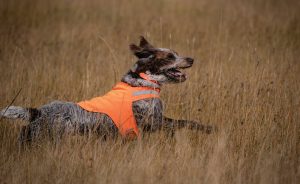 At the Women’s Pointing Dog Training Camp, dogs dove into the shallow waters of nearby Browns Lake to practice searching for ducks, and puppies were introduced to their first ducks on its shores. Most of the land surrounding this wetland is either owned by the USFWS or protected by conservation easements that the agency holds. Federal Duck Stamp revenue has paid for much of the habitat conservation work here and across the nation. Each year, artists compete to see whose painting will appear on the next year’s stamp. Duck hunters buy the stamps as part of their hunting license, though anyone can purchase these wallet-sized works of art to support waterfowl habitat.

Surrounding Browns Lake, the Blackfoot Valley is a wild working landscape of rivers, forests, ranches, and meadows. Wildlife managers, ranchers, and environmentalists have worked together for decades to keep ranches whole and habitat and migratory corridors intact. Three quarters of the 1.5-million-acre Blackfoot watershed are permanently protected for conservation, either as public land or with conservation easements on private land. Trumpeter swans and bull trout thrive on and in the waters, and Canada lynx, gray wolves, and grizzly bears roam the mountains and valleys.

Many nonprofit groups, such as the rancher-founded Blackfoot Challenge, bird conservation groups like Ducks Unlimited, and state and federal agencies all have the same goal in the Blackfoot Valley: They want the 15-year-old dog trainer to have wild places to go, and wild birds to hunt, now, as well as when she’s 72.