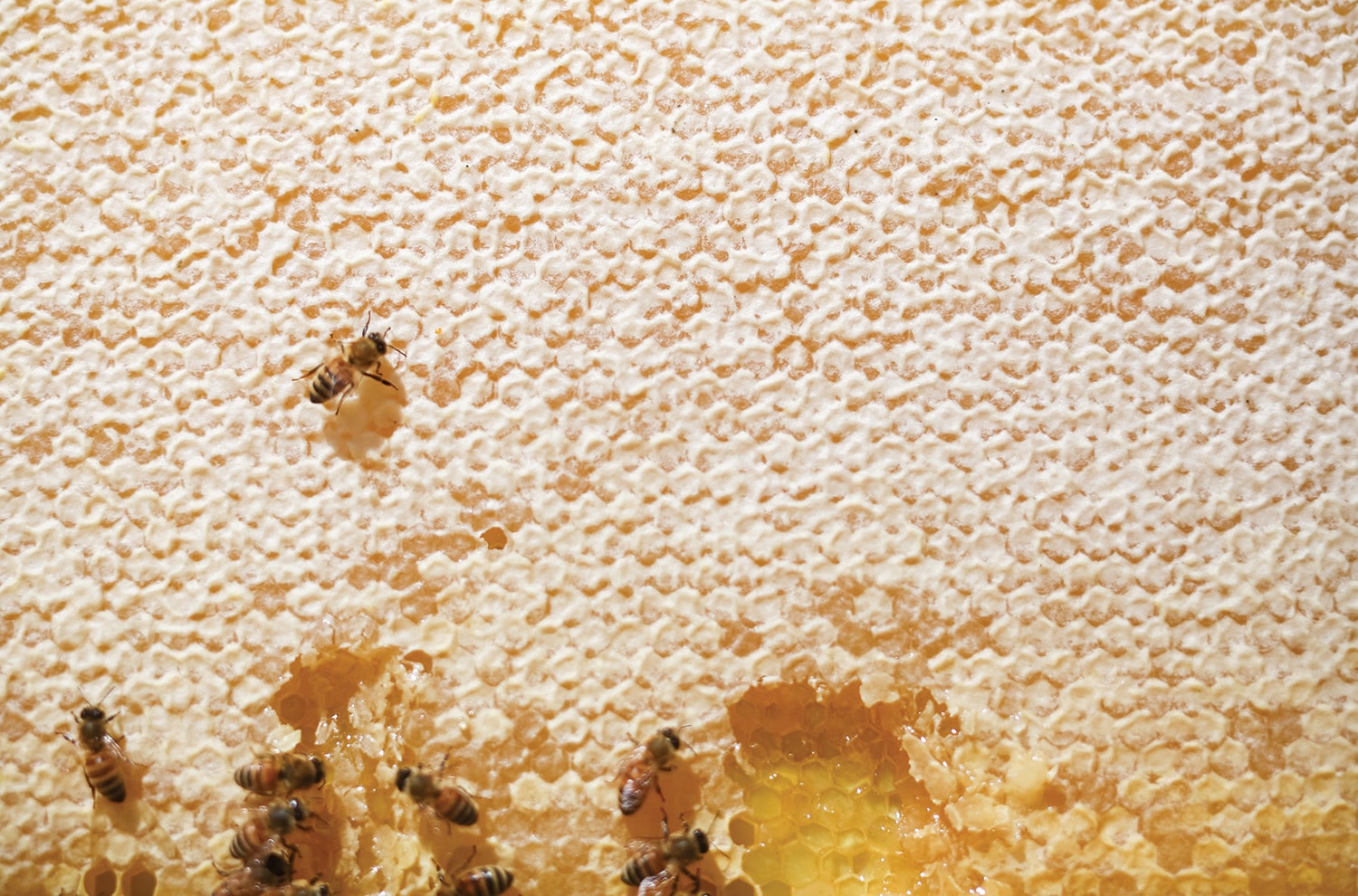 Bees eat about 100 pounds of honey during the winter.

07 Jun From Hive to Table

THERE ARE SO MANY ASTONISHING FACTS ABOUT HONEY BEES, that if you list them all together, it’s hard to believe that one little creature could be so accomplished and compelling. For instance, it takes about 700 honey bees — flying 55,000 miles and collecting nectar from 2 million flowers — to make a 1-pound jar of honey; a queen bee is the longest-living insect on earth, capable of surviving for up to seven years; and bees navigate by the sun and communicate directions to one another through dance. 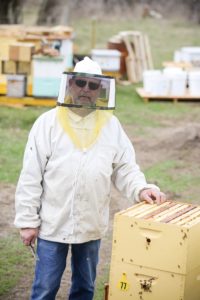 Steve Thorson, owner of Montana Honey Bee Company, tends to his bees in their brood boxes

Rock art that depicts humans collecting honey from wild bees dates to around 10,000 years ago, and domestication is shown in Egyptian art around 4,500 years ago. In Montana, as sure as drift boats emerge from garages to signify the start of summer, the honey bees and their white, pine-box homes are harbingers of spring. With their bee-boxes located a practical distance away from structures, their presence signifies a change of season and the long-standing symbiotic relationship between farmer and honey bee. 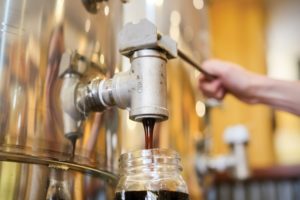 Wildflower “honey on tap” at Thorson’s store, located in Bozeman.

A honey bee makes 1/12 of a teaspoon of honey in its lifetime by foraging in a 2- to 3-mile radius, collecting nectar from hundreds of flowers. When a bee returns to the hive to drop off its bounty, it passes the nectar to another bee through regurgitation. This regurgitation process is repeated until the partially digested nectar is deposited into a honeycomb. At this stage, the nectar is still a liquid, not the viscous, sticky substance we know. To draw the extra water from the honey, bees fan the honeycomb with their wings to speed up evaporation. It takes about five days for the honey to thicken, and a colony will produce about 165 pounds of honey per year.

After most of the water has evaporated, the bee seals the comb with wax flakes from its abdomen, which eventually hardens into beeswax. Away from air and water, honey can be stored indefinitely. (While excavating an Egyptian pyramid, archaeologists found pots of honey in a tomb dating back approximately 3,000 years. It is the world’s oldest sample — and still perfectly edible.) 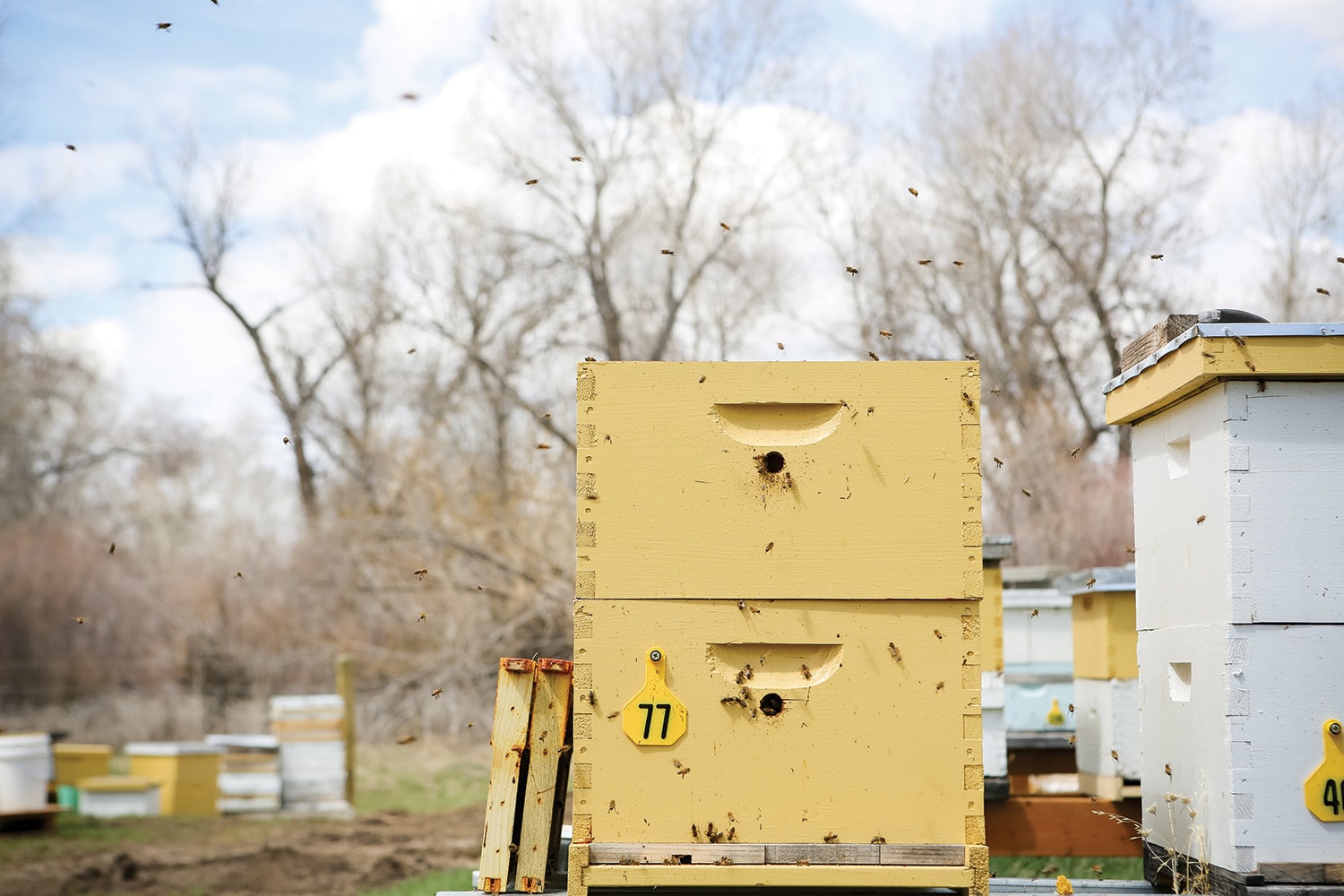 The Thorsons keep about 100 beehives throughout the valley.

Similar to the terroir of wine, regional flowers determine how honey tastes and looks. Honey made from orange blossoms is lighter in color, while honey from avocado blossoms or wildflowers tends to be dark amber. Tupelo honey is harvested over just a few days each spring in two remote river basins in the South; it tastes buttery, melts on the tongue, and rarely crystallizes.

It was these different flavor profiles that first sparked chef Ryan LaFoley’s interest in the culinary arts. “While studying in Italy, I was introduced to a honey farm, and they had things like chestnut honey, apple blossom honey, and orange blossom honey. The taste of each was so different; chestnut honey is super bitter,” LaFoley says. “That really opened my eyes up to food.” 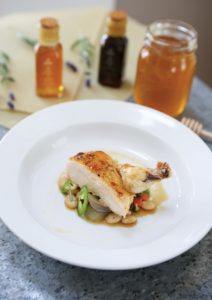 LaFoley graduated from the New England Culinary Institute, worked at The Rusty Parrot’s Wild Sage restaurant in Jackson, Wyoming, and studied cuisine in Northern Italy before moving to Bozeman about 13 years ago. He operates a catering company, LaFoley Kitchen, and is known at the Bozeman farmers’ market for his wood-fired pizzas, which he cooks in the back of a classic Chevy flatbed truck, modified to include a wood-fired stove.

“I use honey, and I have a passion for it,” he says, noting that in addition to such recipes as rosemary, honey-braised chicken, he often uses honey in Italian food. A customer favorite is fontina cheese tortellini with brown butter, sage, and chestnut honey; and he also includes a bit of honey in his elk and bison sausage lasagnas.

These highly organized insects are vital to modern agriculture, pollinating an estimated $15 billion of U.S. crops each year. The U.S. Department of Agriculture (USDA) estimates that 80 percent of insect-crop pollination is accomplished by honey bees, and that approximately one-third of the total human diet is derived directly or indirectly from insect-pollinated plants (fruits, legumes, and vegetables). 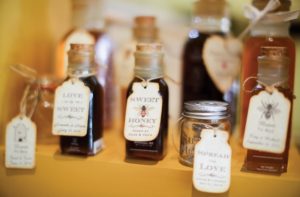 Their store sells honey from different regions, and some has been naturally infused with vanilla bean, habanero peppers, or other flavors.

At the state level, Montana has a rich agricultural history with bees. There are two types of managed bees used in agricultural production here: honey bees and alfalfa leaf-cutter bees. According to the Montana Department of Agriculture, alfalfa yields increase by two to three times when enough alfalfa leaf-cutter bees are present for pollination. Honey bees, meanwhile, are kept by hobbyists and small-scale producers, as well as by commercial migratory beekeepers who make their living pollinating crops from California to the Pacific Northwest.

Montana was the fourth-largest honey producing state in the U.S., according to 2017 statistics from the USDA. Last year, Montana beekeepers harvested more than 10 million pounds of honey, grossing more than $24 million.

But for many Montana beekeepers, honey sales are a small percentage of their livelihood. Most make their money in pollination, which means that Montana beekeeping operations are critical to other states as well, says Michelle Flenniken, an assistant professor at Montana State University and co-director of MSU’s Pollinator Health Center. As a virologist and microbiologist, Flenniken and her students investigate honey bees and the pathogens that affect them at the molecular level. In 2017, she received a CAREER Award of more than $500,000 from the National Science Foundation to continue her research.

Of the 2.5 million honey bee colonies in the U.S., over 1.6 million are transported to the Central Valley of California each February for almond pollination, she says, including about 90 percent of Montana’s honey bees. Most migratory hives are then moved to Oregon and Washington to pollinate apples, pears, and cherries before returning to Montana for the spring nectar flow. 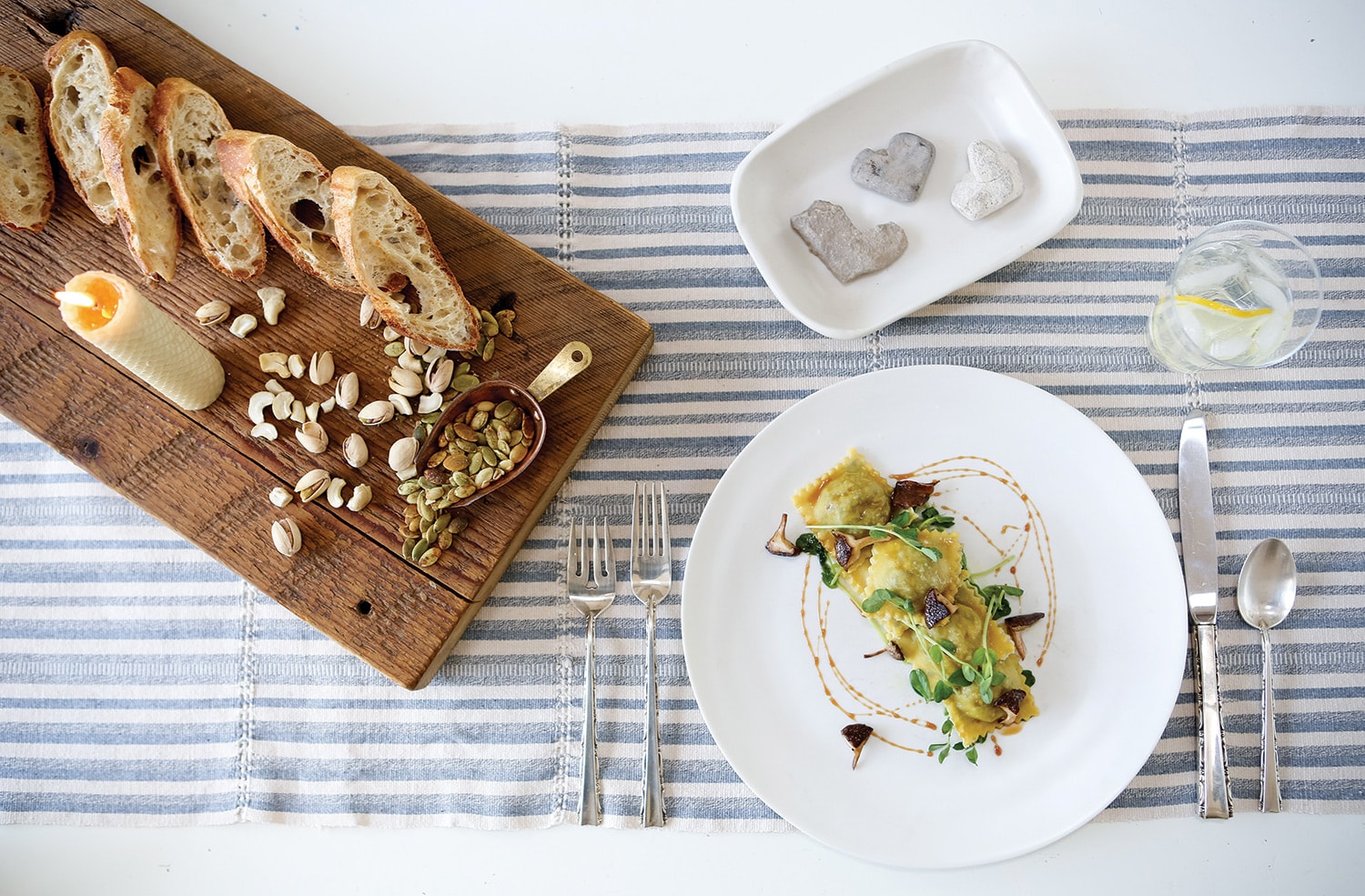 “Honey, for the commercial guys, becomes a migratory thing and a year-round operation,” says Rick Molenda, general manager of Western Bee in Polson, Montana. His store is one of the oldest and largest distributors of wooden beehives in the country. Molenda himself drives to California every May to pick up boxes of bees, mainly for the growing number of hobbyist beekeepers.

“Eighty percent of almonds consumed in the world come from California and that takes pollinators. Beekeepers have [the bees] out in basically winter — in February — for two weeks, pollinating 400 miles of almonds. They move in, and within 10 days, move out,” says Jerry Bromenshenk, an entomologist with more than 40 years of experience studying bees. He says the rental fee for bees in almond orchards averages about $165 to $200 per colony. “If you turn this number around, in terms of true value of commercial beekeeping in Montana, cattle would be first, hogs would be second, and bees third, though they’d virtually be tied with hogs. 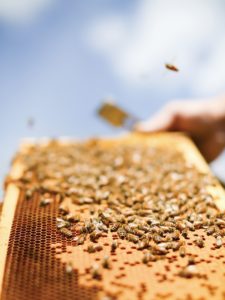 “This is a state that has the potential for great leadership in the nation in almost all aspects of the industry,” he adds. 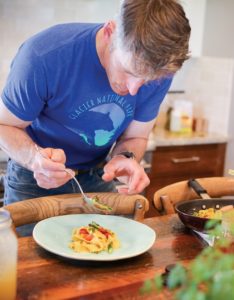 Chef Brian LaFoley adds a drizzle of honey to a homemade pasta dish.

Bromenshenk and entomologists from the University of Montana (UM) successfully taught bees to find land mines for the U.S. military. He also oversees the university’s online beekeeping certification program. Started in 2012, it’s an educational platform for both commercial beekeepers and hobbyists looking to combat some of the challenges of modern-day beekeeping.

“[The classes] became much bigger than we ever anticipated,” he says, noting that the program now has three instructors teaching 43 weeks a year. Bromenshenk was contacted by the Montana State Beekeepers Association to develop the program in response to pollinators’ decline.

“We are facing a decline in pollinators, but the bigger issue is the departure of beekeepers,” Bromenshenk says. “More people are keeping bees, but a smaller percentage actually know what they are doing.” He explains that without proper education and management of bees, pests and diseases can spread quickly through colonies, becoming part of the problem. “Prior to 2006, I could probably name every beekeeper in the state, and now we have at least 10 or 12 formally established clubs,” he says. “But they are learning beekeeping off of the internet and there’s a lot of misinformation out there.”

Education is key, and to reach a larger audience Bromenshenk and his colleagues at UM designed an app, Bee Health Guru, that uses artificial intelligence to analyze bee sounds and determine the health of the hive, identifying seven of the most common disorders. The app is in its beta stage, and should be released in 2019. 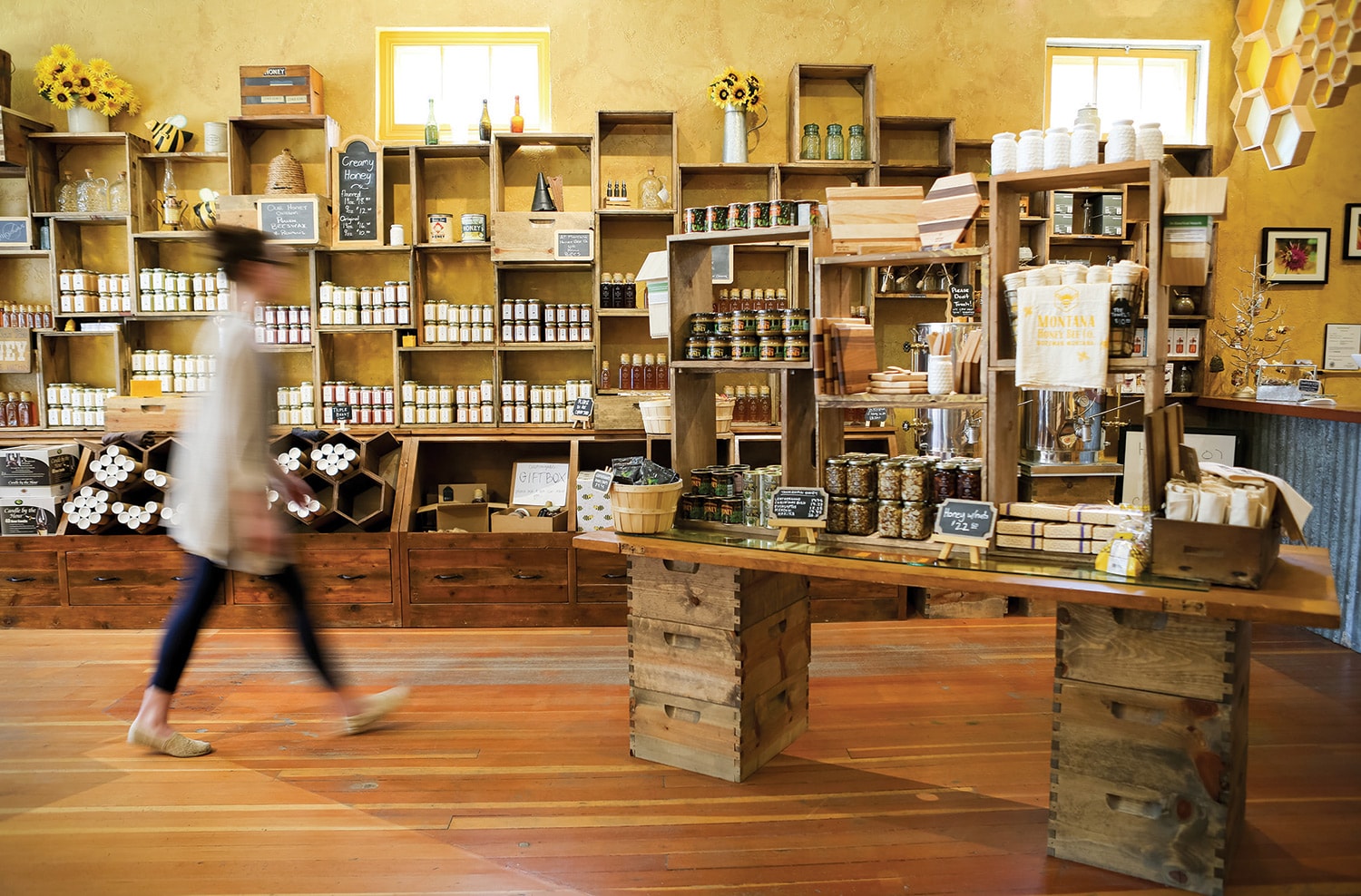 In addition to selling a variety of unprocessed honey, the Montana Honey Bee Company sells beekeeping supplies and teaches classes for beekeepers.

Honey bees are closely managed across the country, so extinction is not a concern despite historic colony losses. In the U.S., managed honey-producing colonies dropped 61 percent from their high of 5.9 million in 1947, to a low of 2.3 million in 2008. Today, beekeepers are working harder to maintain about 2.5 million colonies nationwide. 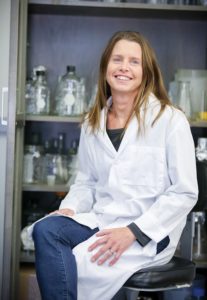 “Primarily, the number of honey bees has been controlled by beekeepers, and by the supply and demand of pollinators and honey production,” Flenniken explains. “In general, in the last 30 years of managing the honey bee population, we’ve maintained at about 2.5 million colonies in spite of having issues with Colony Collapse Disorder, or increased annual losses of around 33 percent since 2007. If you’re a beekeeper and you have 100 bees and 33 percent of them die, you can go to another honey bee colony and split it into two, and make up your losses. So beekeepers have just split their colonies more frequently.”

In short, it’s become more difficult to maintain thriving colonies of honey bees, but people still want to do 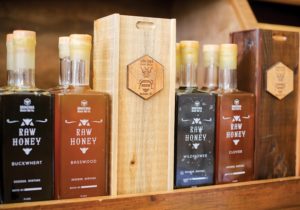 their part. “We’ve seen the hobby market really pick up, roughly seven to nine years ago, when they were talking about bees dying off,” Molenda says. “With all the national attention with the media, we saw backyard beekeeping crop up everywhere. They all wanted to save the bee. It’s gone nuts, really.”

Early each May, from their downtown Bozeman storefront, Steve and Joyce Thorson disperse starter packages of bees (about 500 hives-worth and about 50,000 bees) to hobbyist beekeepers. The couple initially wanted to 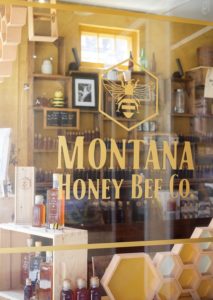 eliminate processed sugar from their diet and honey was the best option. After developing a passion for beekeeping, they opened the Montana Honey Bee Company in June 2016. With walls painted yellow and the comfortable feeling of a general store, the company sells gourmet honey and equipment for beekeepers. Some honey varieties are from the Thorsons’ own hives, while other jars come from as far away as Tasmania. They’ve taught between 500 and 600 people in their beekeeping classes, Steve says, and the store also facilitates a hive-hosting program that connects landowners with beekeepers who don’t have land.

“There are more than 200 varieties of honey and they all taste different,” says Steve, who notes that with the growing interest in beekeeping, honey-flavored water bars are popping up on the East Coast.

The honey bee is important to farmers, hobbyists, chefs, scientists, and many other Montanans who are captivated by this highly efficient insect. As spring turns to late summer, it will come time for the honey harvest. And from the ecosystem housed inside those white, pine boxes, the honey bee will continue to fly from flower to flower, sweetening life for all along the way.