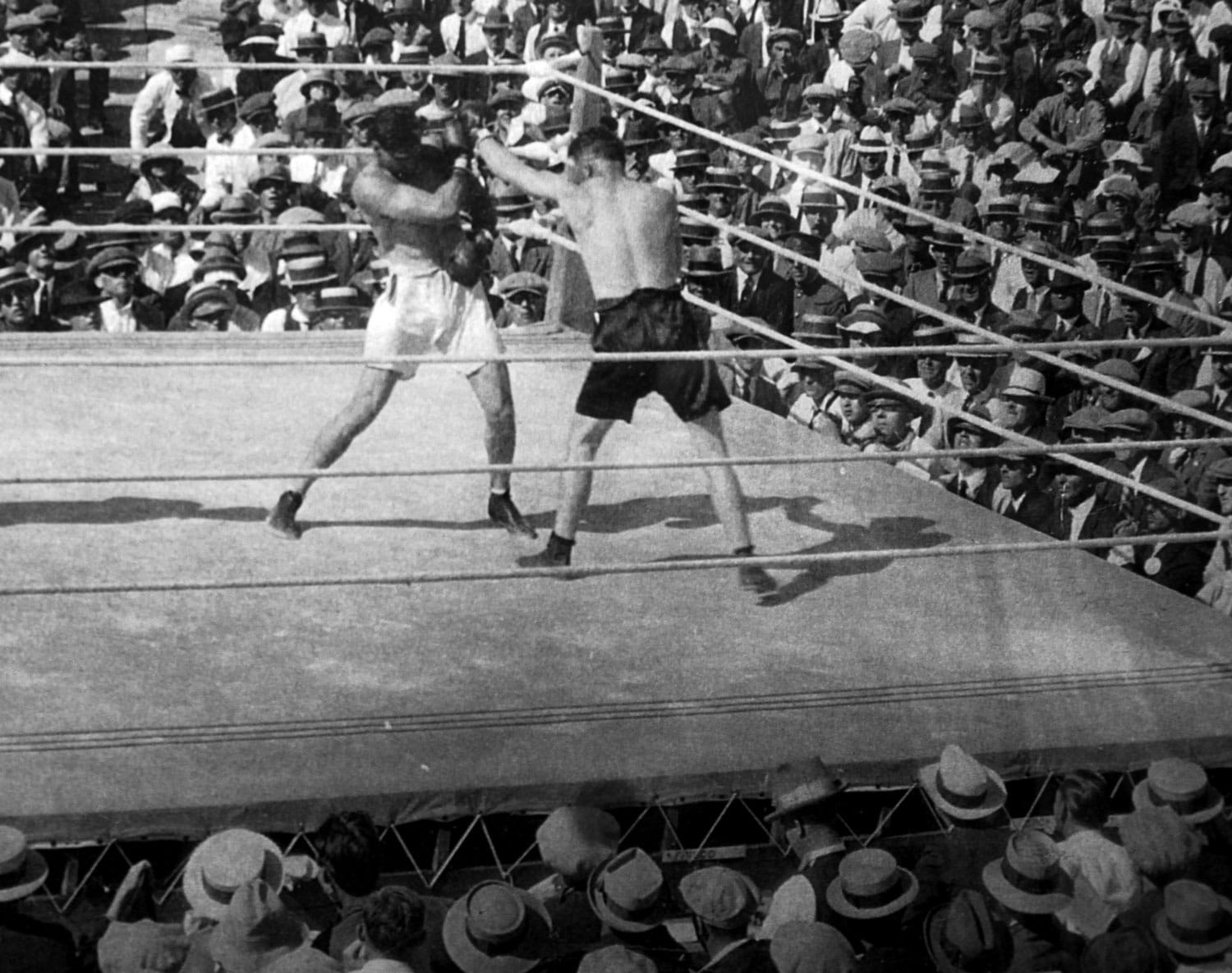 10 Jun From Folly to Feat

As the final bell rang out, a crowd of thousands erupted in cheers for the two great heavyweight boxers who had battled for 15 rounds in the scorching sun. The referee quickly passed his judgement, raising the hand of the winner and still-champion, Jack Dempsey, while the defender, Tommy Gibbons, settled for the prize of crowd favorite.

The July 4, 1923, fight was one for the record books, as Gibbons became the first fighter to survive a full bout with Dempsey, arguably the most well-known sports figure in the world at the time. But the grueling battle in the ring has proven less captivating for boxing fans and history buffs than the story surrounding the event. While one might expect a fight that captured headlines around the world to take place at a well-known venue in a large city, the stage for this epic battle was a hastily constructed arena in Shelby, Montana, a small town on the Great Northern Railroad’s route along the Montana Hi-Line. 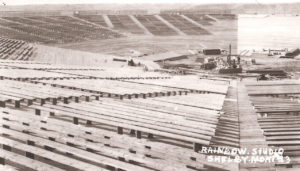 The Shelby stadium, with a capacity of 40,000, required 1 million board feet of lumber and 300 laborers to build it. Courtesy of the Champion’s Park Committee.

Shelby’s bid for the fight came in the wake of large oil strikes near the town in 1921. A few prominent citizens dreamed that the community might become the “Tulsa of the West,” as the Oklahoma city had experienced dramatic economic growth and a population surge after oil discoveries around the turn of the century. But when James W. Johnson, a prominent Shelby citizen and real estate investor, proposed hosting a championship boxing match featuring Dempsey, most scoffed at the idea. Even Johnson later admitted he hoped to simply draw media attention to the town with his bold proposal, but the scheme gradually snowballed into a detailed and expensive plan. Dempsey’s shifty agent, Jack Kearns, managed to negotiate a payout of $300,000, an epic amount for the time, and Johnson and others struggled to pay the fee right up until the final bell on July 4. Expecting a huge number of visitors, Shelby underwent a dramatic transformation, including the construction of 60 miles of additional railroad tracks, dozens of new buildings, a third floor added onto the Rainbow Hotel, and the build-out of a massive outdoor arena.

But what Johnson and others hoped would be a boon for the town’s development and their personal business ventures proved to be an epic financial disaster. Fears about a lack of funds to carry out the event led to widespread media speculation that the fight would fall through, resulting in a far lower fan turnout on July 4 than was originally expected. These financial troubles compounded already difficult agricultural conditions throughout the region and the state, and it wasn’t long until banks in town closed, locals lost their savings, and the dream of Shelby becoming a hub of the West faded into memory. 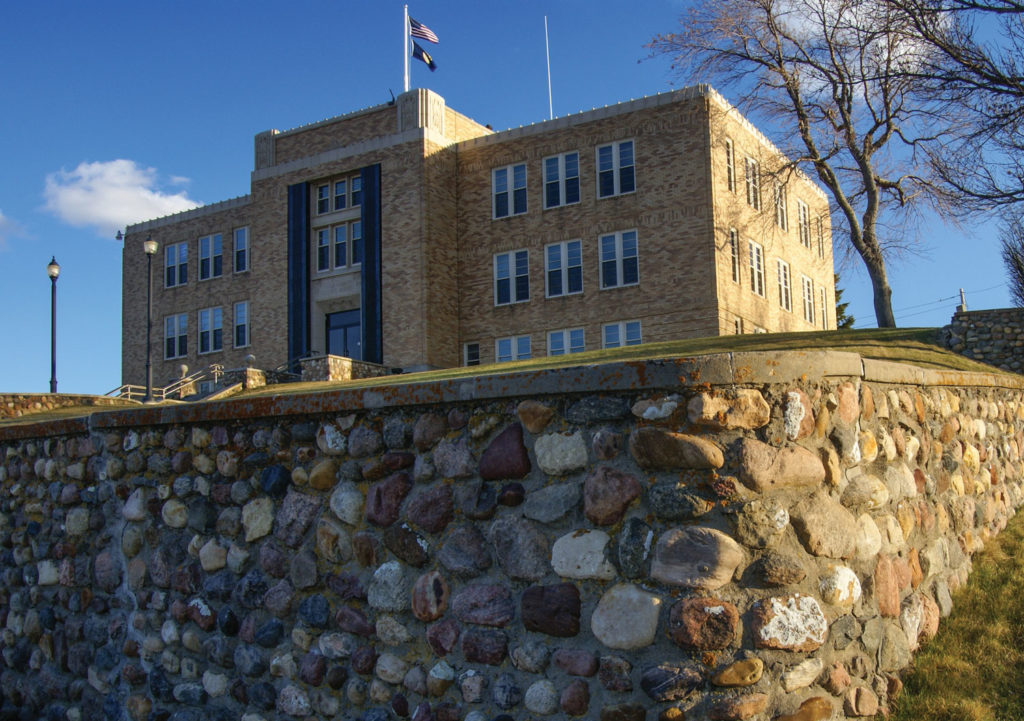 The Toole County Courthouse is one of the more prominent buildings in Shelby today. Photography: Pete Strazdas

This is often where the story of Dempsey versus Gibbons ends. In the years since, the allure of the big fight in the small town prompted an array of books, articles, films, and even songs. Writers and filmmakers across time and space have focused on this event primarily as an oddity, with overarching expressions of small town naivety made obvious in titles such as “Shelby’s Folly” or “Heavyweight Disaster.”

Local residents often seemed to buy into that negative narrative. Dean Hellinger, a resident of Shelby for 84 years, recalls that his family “never talked about it,” even though his father attended the fight. Lorette Carter, the city’s economic development director since 2003, grew up in the town in the 1970s. “I didn’t learn about the boxing match at all,” she says. “It was never really part of the conversation about our history.” 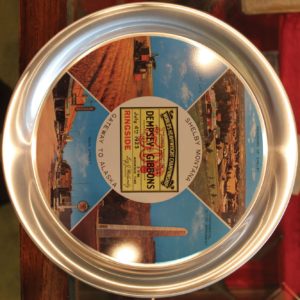 A commemorative plate housed in the Marias Museum of History and Art demonstrates the use of the fight as a tourist attraction for Shelby.

Although the fight survives in occasional reminiscences, anniversary acknowledgments, and in physical structures like the Town Hall, which was constructed as a media headquarters for the fight, community engagement with the event seemed largely the result of outside interest from boxing enthusiasts, sports writers, and filmmakers. Locals seemed more inclined to view Dempsey versus Gibbons as an amusing tale or, according to longtime mayor Larry Bonderud, a sore spot and “detriment to the community.” The fight story resurfaced at times but, for the most part, it remained confined to the past.

Nearly 96 years after the fight, I’m standing at the site where Dempsey and Gibbons poured out their sweat and blood on the Hi-Line, but it doesn’t look anything like it did in 1923. I’m on the west side of Shelby, with a Pizza Hut parking lot in front of me, a Motel 6 across the street, and a Speedy Lube behind. Overhead, powerlines crisscross the sky, connecting to a nearby transfer station. The train tracks that parallel the main roadway are a stone’s throw away, and the sound of clanking train cars and squeaking brakes offers an audible reminder of the importance of the railroad to the city’s history. This is Champion’s Park, a commemorative site dedicated to the fight and a historical oasis amongst the modern development of the area. However, it too is a relatively recent addition to the city.

In 1923, the site of Champion’s Park was an isolated area on the outskirts of town. But its surrounding hillsides and bowl-like geography made it an ideal location for a stadium that matched the grand aspirations of the fight promoters. As I walk around the site, it’s hard to imagine that an arena with a capacity of over 40,000 people, nearly as many as the current football stadiums of Montana State University and the University of Montana combined, once engulfed this area. Following the fight, Shelby’s stadium was dismantled and used to build oil derricks and other structures in and around the city. 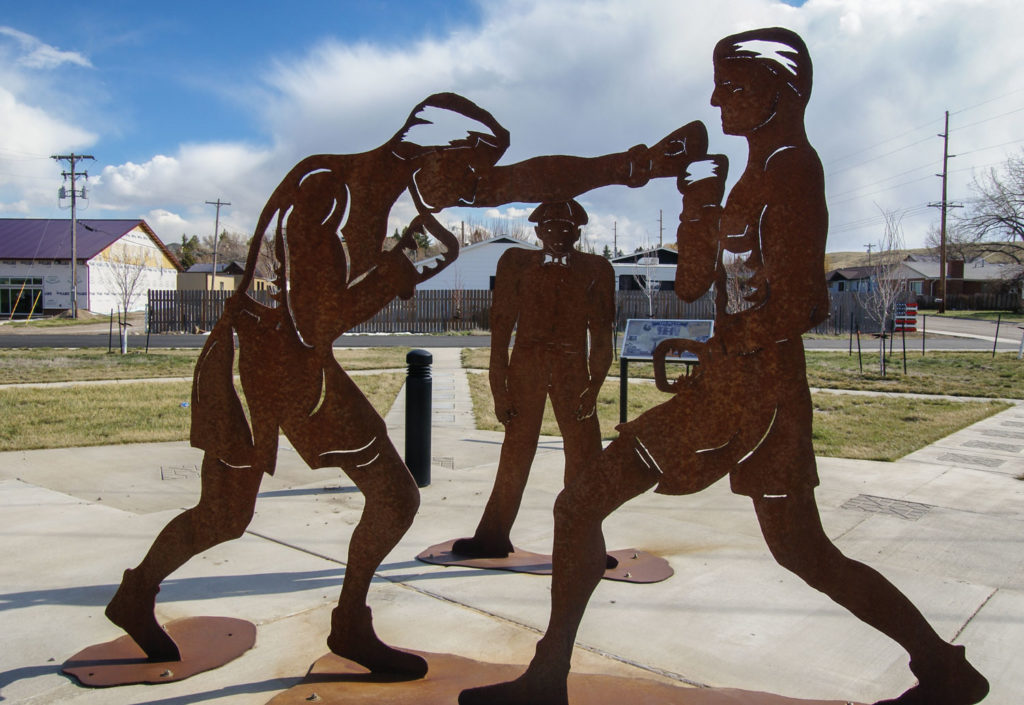 Exten- sive fundraising by local citizens enabled the construction of Champion’s Park, including these bronze cutouts that serve as the center point of the site. Photography: Pete Strazdas

Like the once great stadium, memories of the fight in Shelby are being repurposed in different ways. Modern day community developers hope to take advantage of the event to spur outside interest, not unlike the big dreamers of the past. The ring in Champion’s Park stands at the center of a larger “arena” of attractions nearby — a refurbished 1930s carousel, the Marias Museum of History and Art, a veteran’s memorial, and even a splash park. Perhaps the history of the fight will never attract hordes of tourists to Shelby, but the construction of the park rebrands the old story in a positive light for the community. The park project began in 2003 and required extensive planning, fundraising, and community cooperation to complete, although there are hopes for additional construction in the future.

More than 15 years after construction on the park began, the boxing match seems less of a flop and more of a feat for the people of Shelby. In history, small towns and their residents are often cast as passive recipients of larger forces, rather than active agents of their own destinies. On the surface, Shelby seems to fit this narrative, as its founding came with the Great Northern Railroad in 1891, and its growth and decline seemed bound to the industries around it — oil, natural gas, railroads, and agriculture. Even the boxing match, though an idea born among locals, is often portrayed as a destructive outside force, like a drought that sucked the last bit of moisture from the land. In truth, it required vast amounts of local resources, ingenuity, labor, and community cooperation to hold a world-class fight in Shelby. “It’s so unique that they even thought about having it, but pulling it off, even if it was a financial failure, was quite a feat,” Hellinger says. Bonderud claims that, despite the hardships, “it still happened, out in the middle of nowhere. And that in itself is just amazing.” Carter concurs, “In today’s terms it would be a Super Bowl. People are so surprised to learn about it — ‘Oh my gosh, this really happened in Shelby?’” 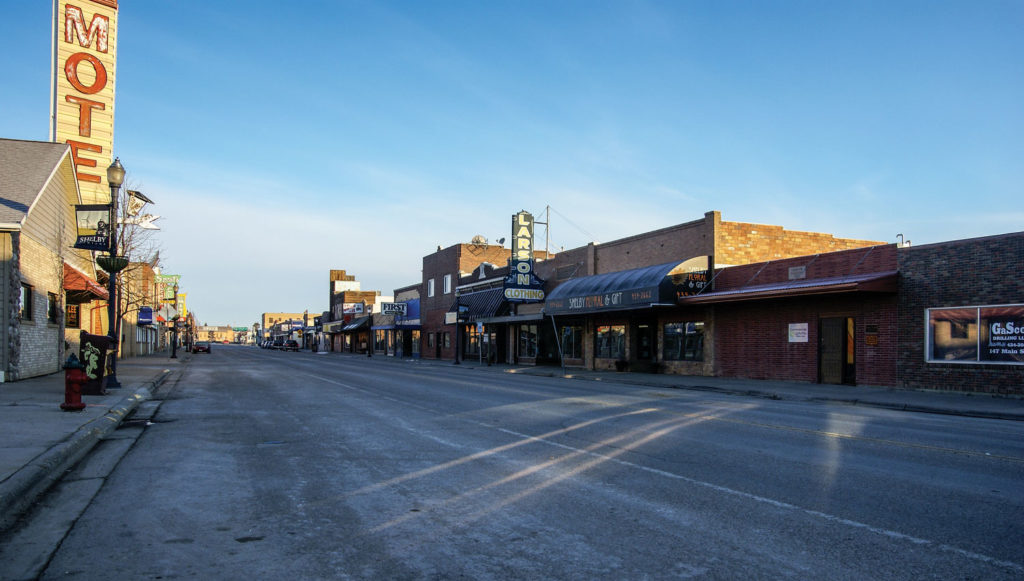 The financial disaster of the Dempsey-Gibbons fight was one of many challenges the people of Shelby faced throughout history. Today, the community is embracing its legacy of endurance and perseverance. Photography: Pete Strazdas

If one looks beyond the financial failures of the fight, one might see greater significance and value. For Bonderud, the bout represents an enduring spirit of resilience and risk-taking among Shelby residents. A kiosk at Champion’s Park suggests something similar, likening the community to the defeated challenger — “Just like Tommy Gibbons, you can’t keep a good man down for long!” For some, Gibbons epitomizes Shelby, still on his feet when the final bell rings, despite the odds. But whether one believes in a community ethos or not, imaginings of the fight in this way represent a renewal of local interest and pride around the event.

I’m nearing the end of my research on the fight when I meet Dean Hellinger to view the Dempsey-Gibbons exhibit at the Marias Museum of History and Art. After exchanging pleasantries with Hellinger, who has volunteered at the museum since 1990, I make a beeline for the exhibit, bypassing everything around me. Hellinger is courteous and soft-spoken, answering questions I have about the artifacts and the fight. Afterward, he asks if I’d like to see the rest of the collection. I agree, Although, to be honest, I’m a bit indifferent. But as I view exhibits and listen to stories, I realize the fight serves a purpose I hadn’t yet considered. It is an entry point to a much larger and richer history of this long-lived community, centered on the people who came before and remained after that momentous day in 1923.

Hellinger tells me he often begins tours by talking to guests about the fight, using it as a starting place, but certainly not an ending point, for a larger discussion. Champion’s Park follows a similar approach: Although it centers on the fight, it also includes interpretive signs highlighting local history that make little if any reference to boxing. The Champion’s Park Committee, initially born from the legacy of Dempsey versus Gibbons, has conducted audio tours of community history and is working to create a monument for the park from stones gathered at local homestead sites. Clearly, Shelby’s citizens are stepping outside of the ring to present their story. 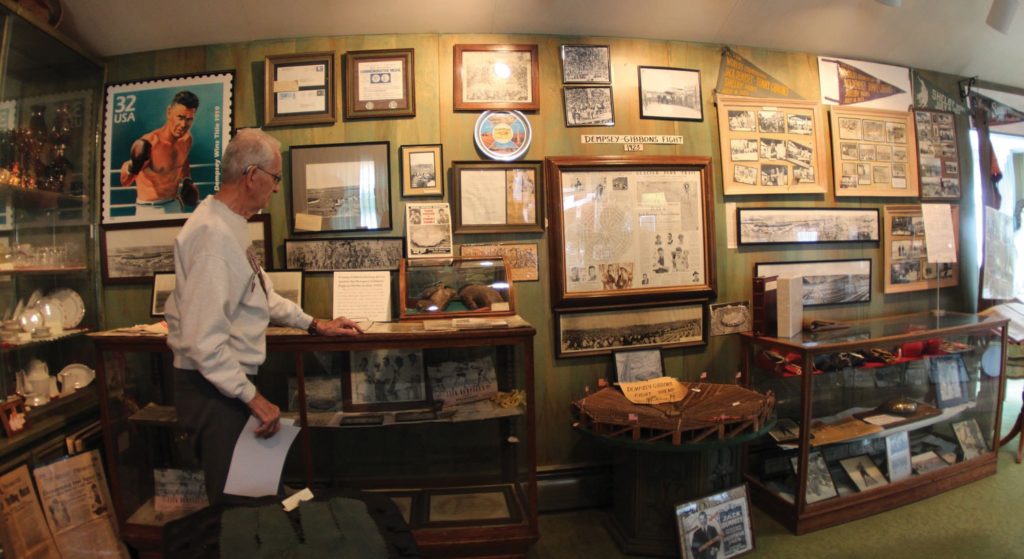 Dean Hellinger, who has volunteered at the Marias Museum of History and Art since 1990, points out artifacts. Photography: Micah Chang

After our tour of the main floor, Hellinger takes me down to the maze-like basement, also brimming with artifacts, and he does his best to help me understand the connection of these objects to local people and places, to histories both down the street and across the oceans. The ghosts of Dempsey and Gibbons do not reside here.

Finally, in a darkened hallway, I thank Hellinger for the tour, and I mean it. This community’s history is far bigger than boxing, but I think the residents of Shelby already know that. It’s outsiders like me who can use a lesson in the richness of this place.

Satisfied, I turn to go. But I don’t get far before Hellinger flicks a switch and illuminates another room full of artifacts, exhibits, and stories.