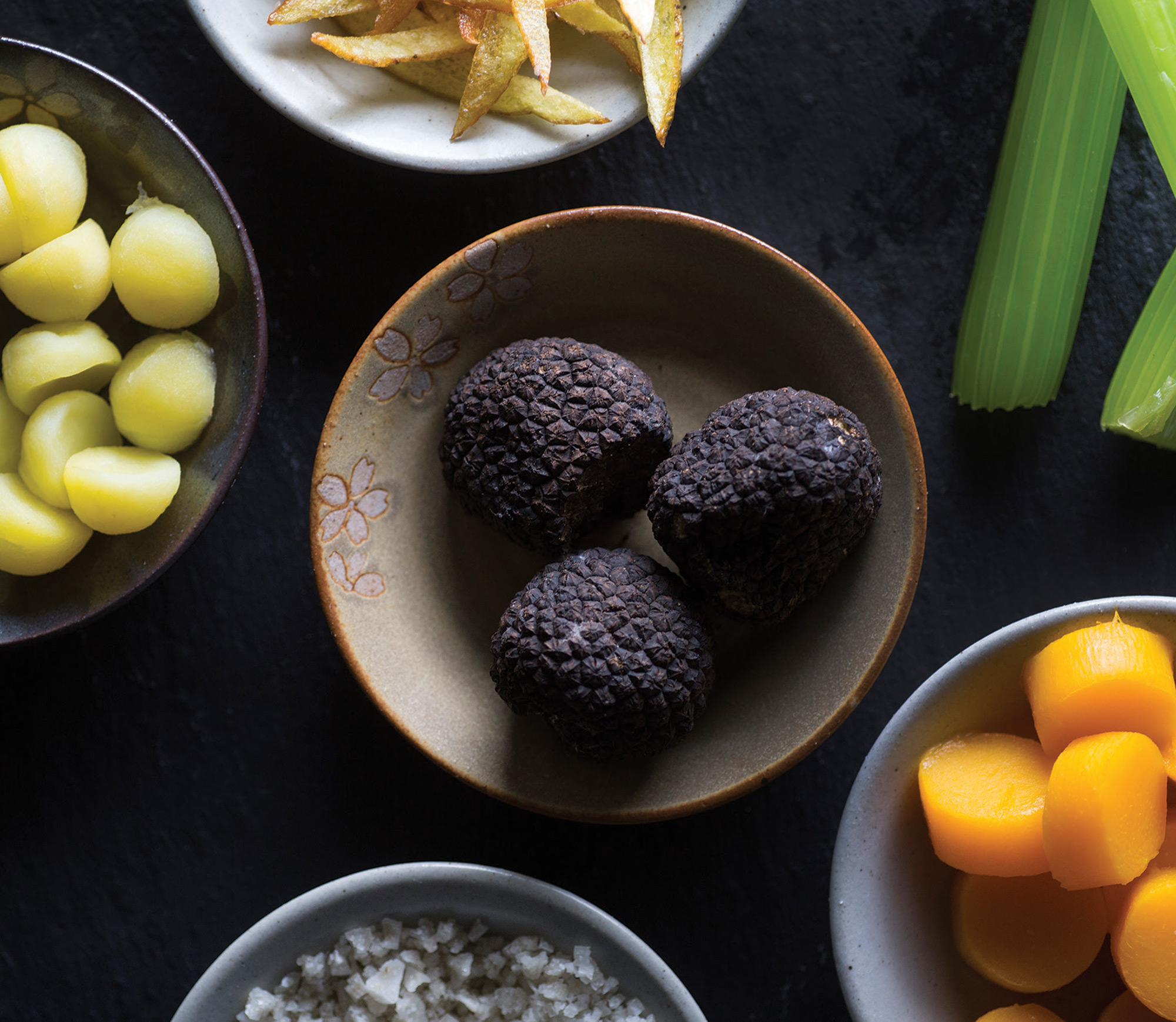 28 Nov From Field to Table

WITH HUNTING SEASON IN THE REARVIEW MIRROR, those who had the good fortune to fill their tags also have full freezers. Now it’s time to consider what to do with the harvested meat. Every ethical hunter eats the game that he or she harvests, and with well over 16 million hunters nationwide, and more than 100,000 in Montana alone, that’s a lot of wild game being consumed every year.

Avid hunters often have their own approach to the sport, their favorite spots and ways to score the big one, for example. And many also have their own theories about the best way to cook it up once they bring it home, whether it’s grilling a perfect elk burger or creating a mouthwatering marinade for an antelope steak. Theories abound. But there are a handful of experts who have made it their calling, who know the ins and outs of wild game cookery. We went to the pros in the Northern Rockies to get their tips and tricks, along with the best practices of big game preparation that will make your elk, deer, or antelope taste every bit as good as you think it should.

From Field to Kitchen

You may have a choice cut of meat, but the flavor is off. From the time the animal goes down, there are a lot of small errors that can alter the flavor of the meat, according to Albert Wutsch, a Missoula, Montana-based professional chef, cookbook author, avid hunter, and regular speaker at sportsmen’s conferences, where he teaches hunters about field butchering techniques and wild game cooking. And although the mistakes you may (or may not) have made in the field are behind you, it’s something to take into consideration going forward. “A lot of people are mismanaging the treatment from the field to the cutting board,” he says. “If you have quality meat on the cutting board, you can make a great meal, but you can’t reverse the damage you’ve done in the field.”

Wutsch lists off a number of potential field mishaps. “Many people gut shoot the animal and spread the contamination, or they cut into the bladder or tarsal glands.” Another flavor affecter? The drag. “If you drag a deer through a field of sagebrush, you basically just put a sagebrush rub on it,” Wutsch says. “I tell my hunters, ‘Shoot in a field of rosemary and garlic instead!’” Studying up on field techniques is a good idea; among many other resources out there, Wutsch offers a two-hour instructional DVD on the topic (available at venisoncache.com).

From Kitchen to Cooking

There are a few techniques you might want to play around with in the kitchen even before cooking. Daniel Wendell, an avid hunter, chef, and owner of The Food Studio in Bozeman, Montana, explains that aging the meat has a big effect on the flavor and tenderness. “There’s a stigma that wild game is tough, but a lot of people don’t take care of the animals correctly,” he says. He likes to dry age either fresh or defrosted meat in the refrigerator before cooking. “The fridge inhibits bacteria growth, it ages the meat by letting it sit, and it acts as a dehydrator because there’s no humidity,” Wendell says. He explains that the process slowly draws the blood and shrinks the meat, concentrating the flavor while breaking down the enzymes to create a more tender cut.

Wendell recommends putting the meat on a rack or on paper towels and then on a plate in the fridge, uncovered or covered in a breathable material such as cheesecloth, for 48 to 72 hours. For a quicker tenderizer, Wendell rubs the meat with baking soda, puts it in the fridge covered for four to seven hours depending on thickness, rinses it off, pats it dry, and then seasons and cooks as desired. “It’s a great trick that keeps the proteins from binding, making it more tender,” Wendell says.

Marinades are another way to tenderize the meat and add flavor before cooking. “A lot of game, like duck and sometimes elk and deer, can have a gamey flavor, and I like a strong marinade for those things,” explains Scott Mason, owner of the Ketchum Grill. He makes a homemade spice rub [see sidebar], mixes it with other simple ingredients, and lets a gamier cut of meat marinate for one to 24 hours.

From Pan to Plate

You’ve done everything right, yet after cooking, that fine piece of meat now resembles, and tastes, more like a hockey puck than anything else. Your family is gnawing on it like it’s jerky, hiding bites in their napkins. You’ve made the most common error that home chefs make when cooking game: overcooking. At this point, you might as well throw it on the ice and break out the hockey sticks.

“Game is super lean and tends to be something that gets overcooked easily,” Mason says. “You always want to aim for the medium-rare range.”

Wutsch explains that all tender cuts (backstraps, tenderloins) should be prepared with dry cooking methods — broiling, grilling, roasting, sautéing, or pan frying — and the key is hot and fast.

For these tender cuts, Warren Bibbens, chef and owner of Olive B’s in Big Sky, Montana, explains that you need to start with a really hot pan or grill to quickly seal in the juices. “We put a flour coating on our elk medallions, put it on a really hot grill, and sear it quickly; I don’t think it’s on there for three minutes,” he says. The flour coating — flour seasoned with salt and pepper — works as a barrier that seals in the juices and creates a little outer crust. “We have guys come up and say they’ve eaten game all over the world and this is the best,” he says. “I think it’s because of the temperature that we cook it at and the coating.”

Wendell adds that it’s important to let the meat warm to room temperature before cooking. “Let it sit out for an hour before you cook it, because cold meat is going to cool off a hot pan,” he says. “Then, sear it super high and let it rest.” Although many enjoy the simple flavor of a medium-rare steak on its own, Wendell and Bibbens use the juices left over in the pan to create a complementary sauce. “Game meat goes well with a sweet sauce,” Bibbens explains. He uses huckleberries in the summer months, and might do a more savory mushroom sauce when chanterelles are in season. online board games

Wutsch explains that tough cuts (chuck or round) are best with moist cooking methods, such as boiling, steaming, braising, and stewing. For the bison short ribs often featured on Olive B’s menu, Bibbens uses a contraption called a sous vide, which cooks the meat in pouches at perfectly controlled temperatures for a mouthwatering, fall-off-the-bone finish. For the home chef, however, he recommends the good old Crock-Pot. “Season it and cook it in a crock with aromatics ­— celery, onion, carrots — so the meat slips off the bone.”

For those new to the kitchen, cooking game may sound daunting. But take a bite of a perfectly cooked, melt-in-your-mouth steak, a juicy burger, or a vibrant stew, and the thrill of the hunt comes full circle. The hunting remains but one part of the process, while the journey in the kitchen — and the eating — can be just as rewarding. 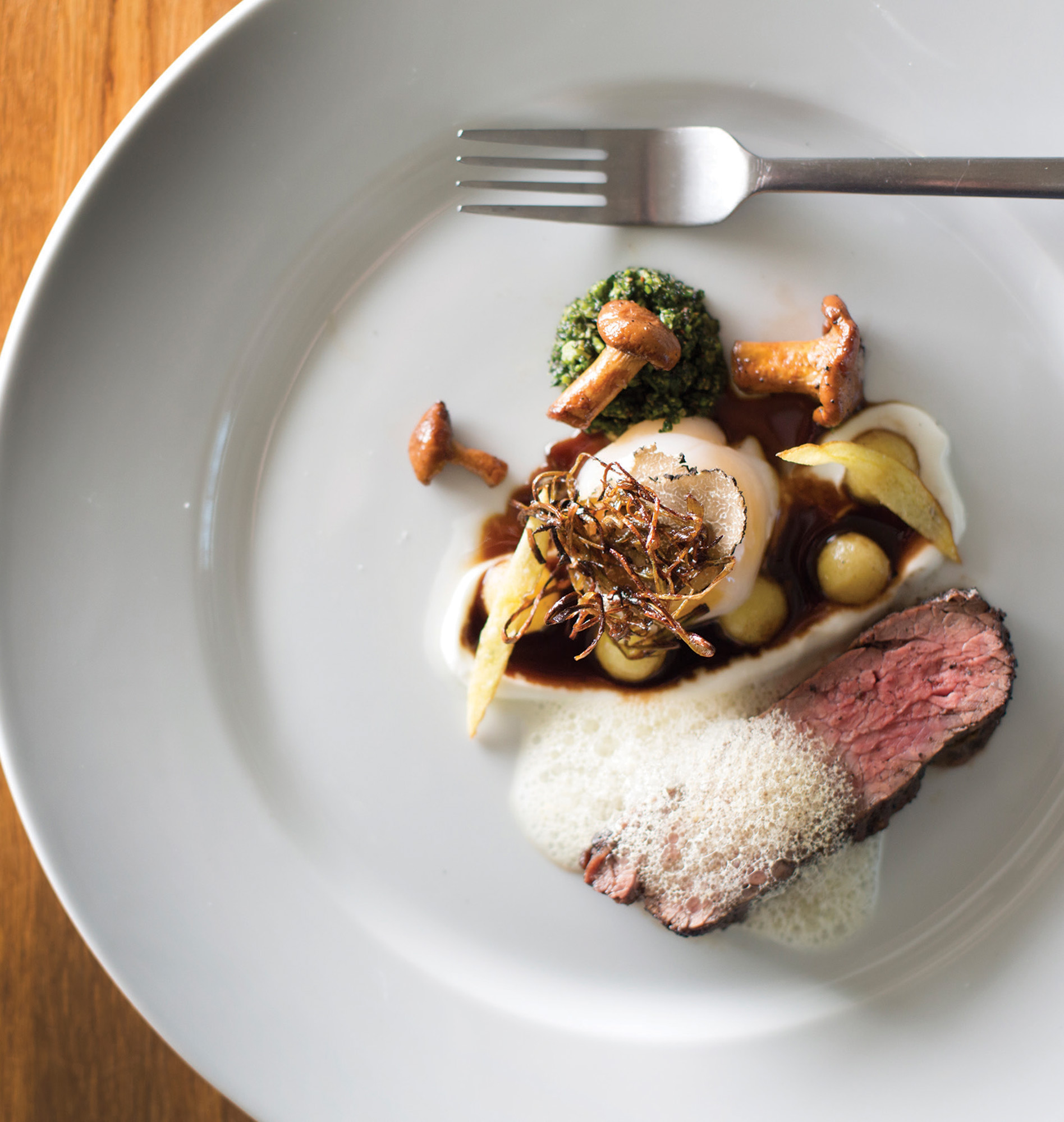 Elk with a game demi-glacé is served with chanterelle mushrooms, broccoli, leeks, potato, and yogurt with a smoke and horseradish foam. 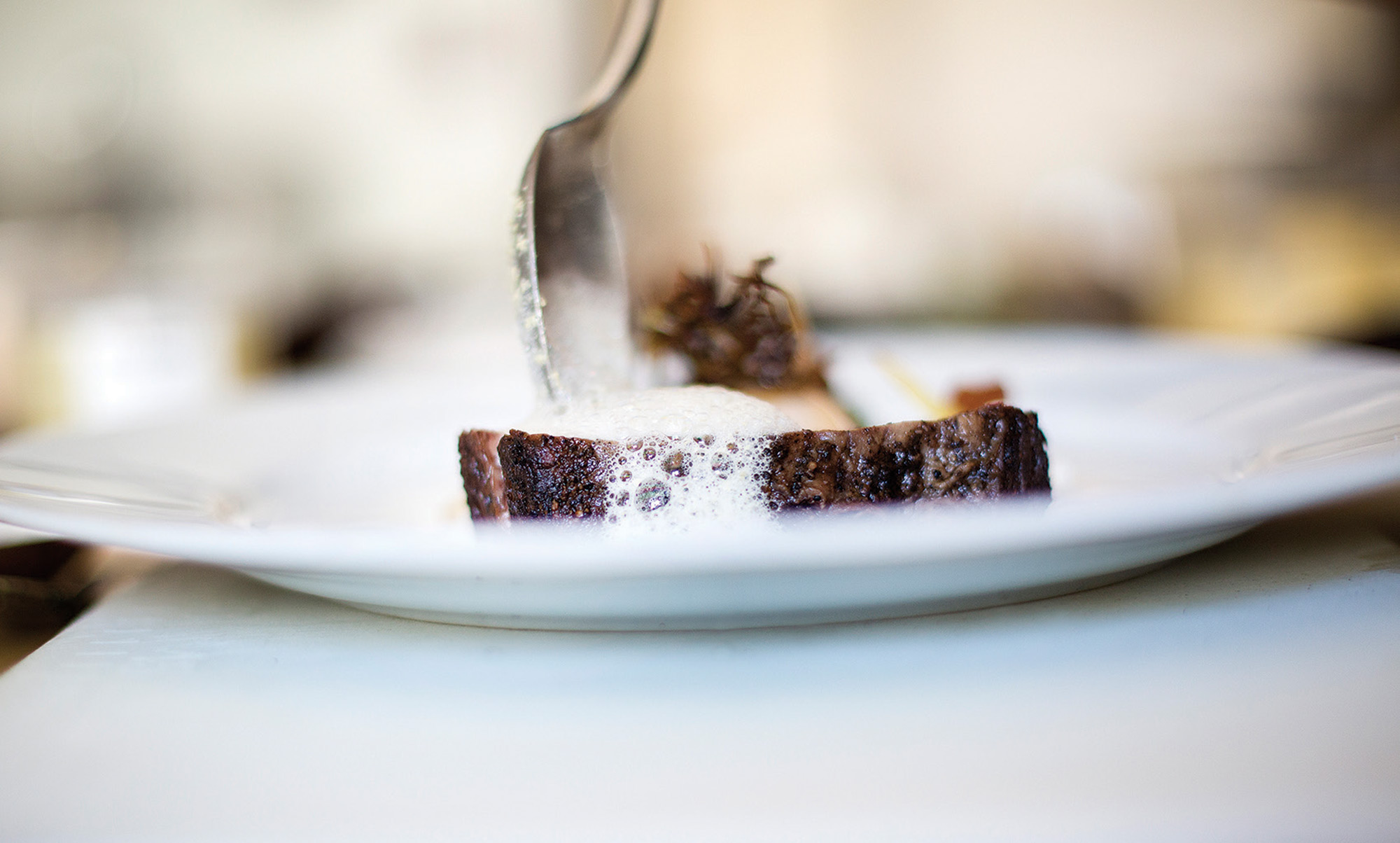 This elk sirloin cap is served with a smoke and horseradish foam. 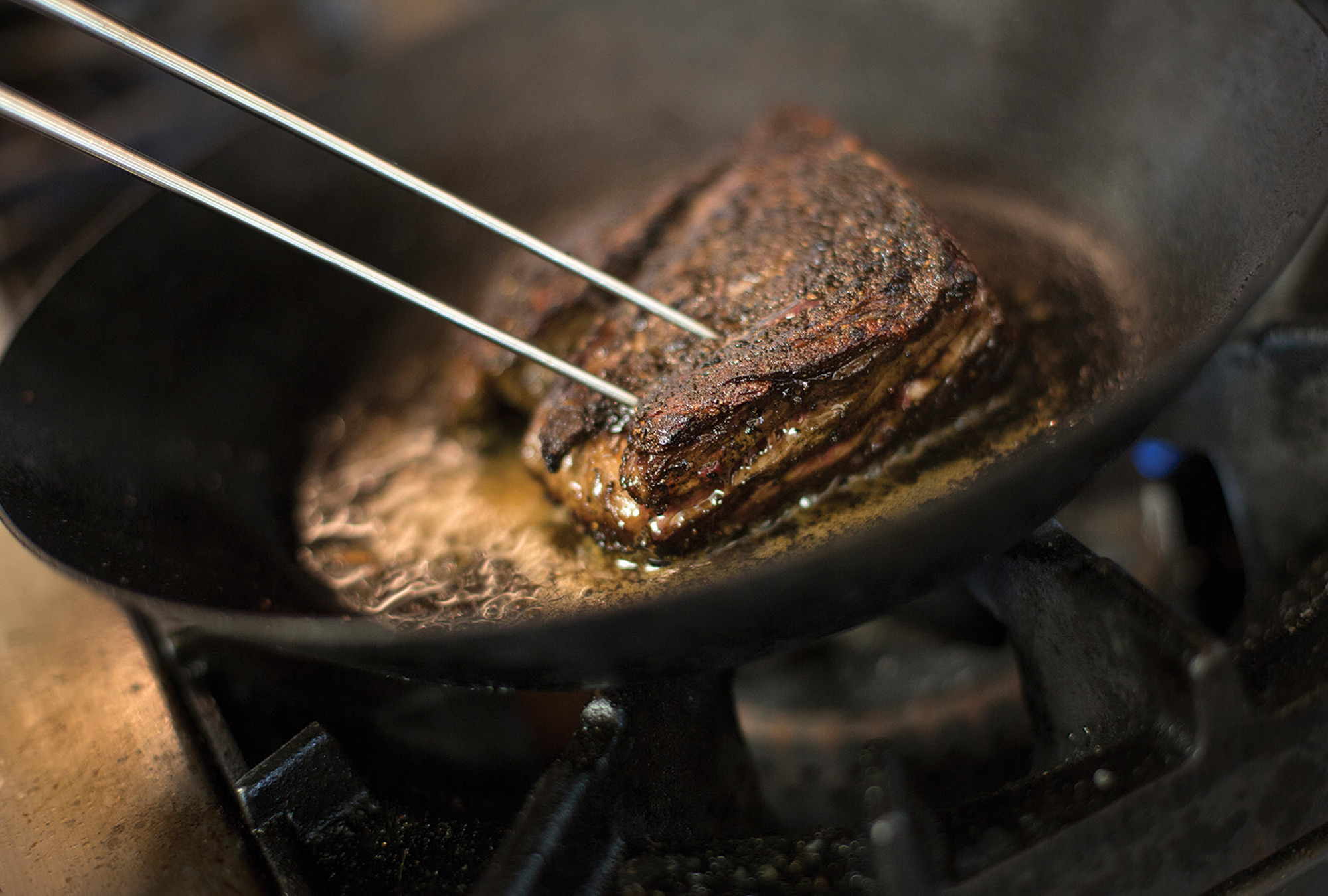 Wendell sears an elk sirloin, cooking it hot and fast. 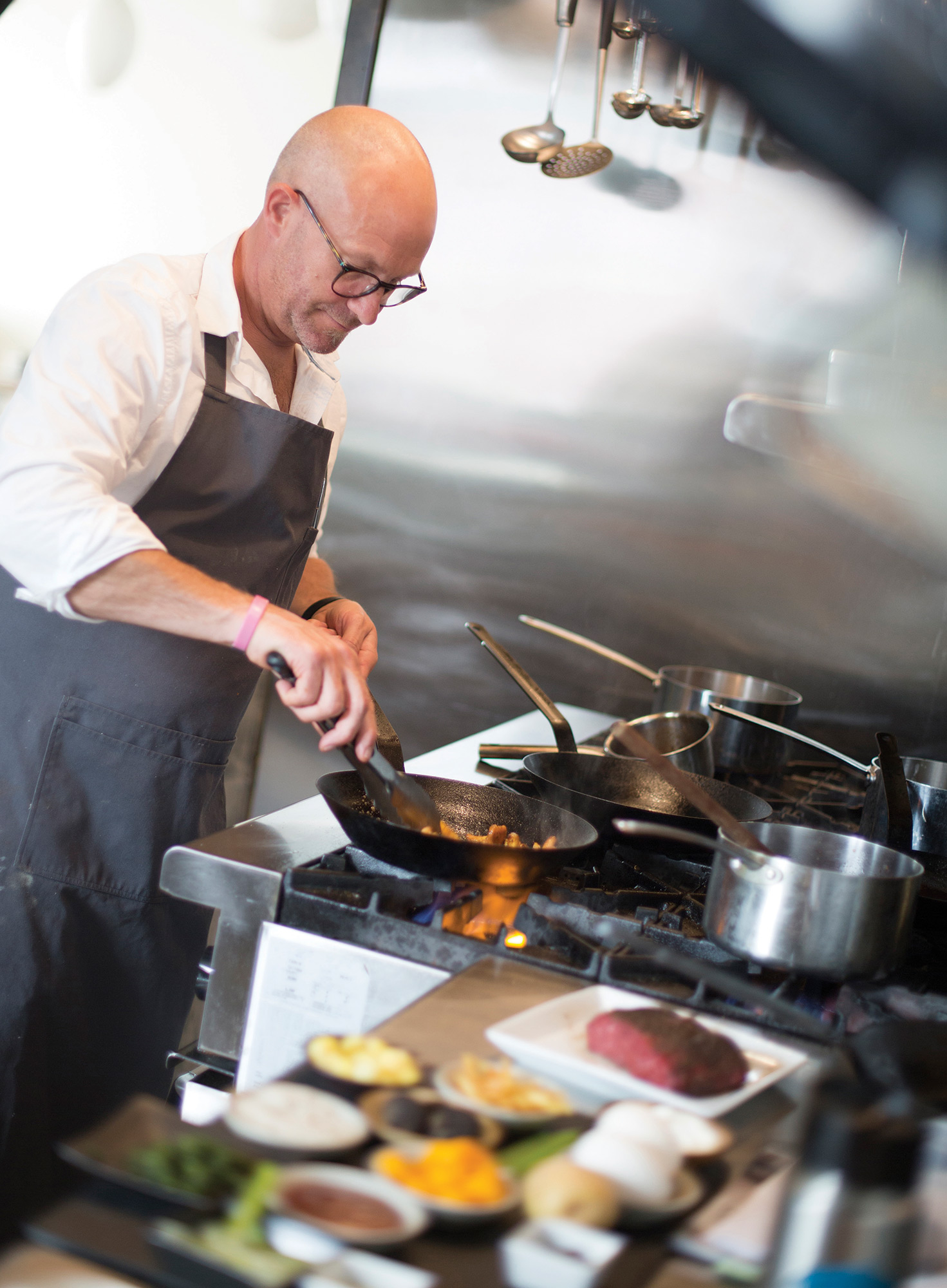 Daniel Wendell, chef and owner of The Food Studio in Bozeman, Montana, frequently includes big game on his multi-course tasting menus and private dinners for clients. 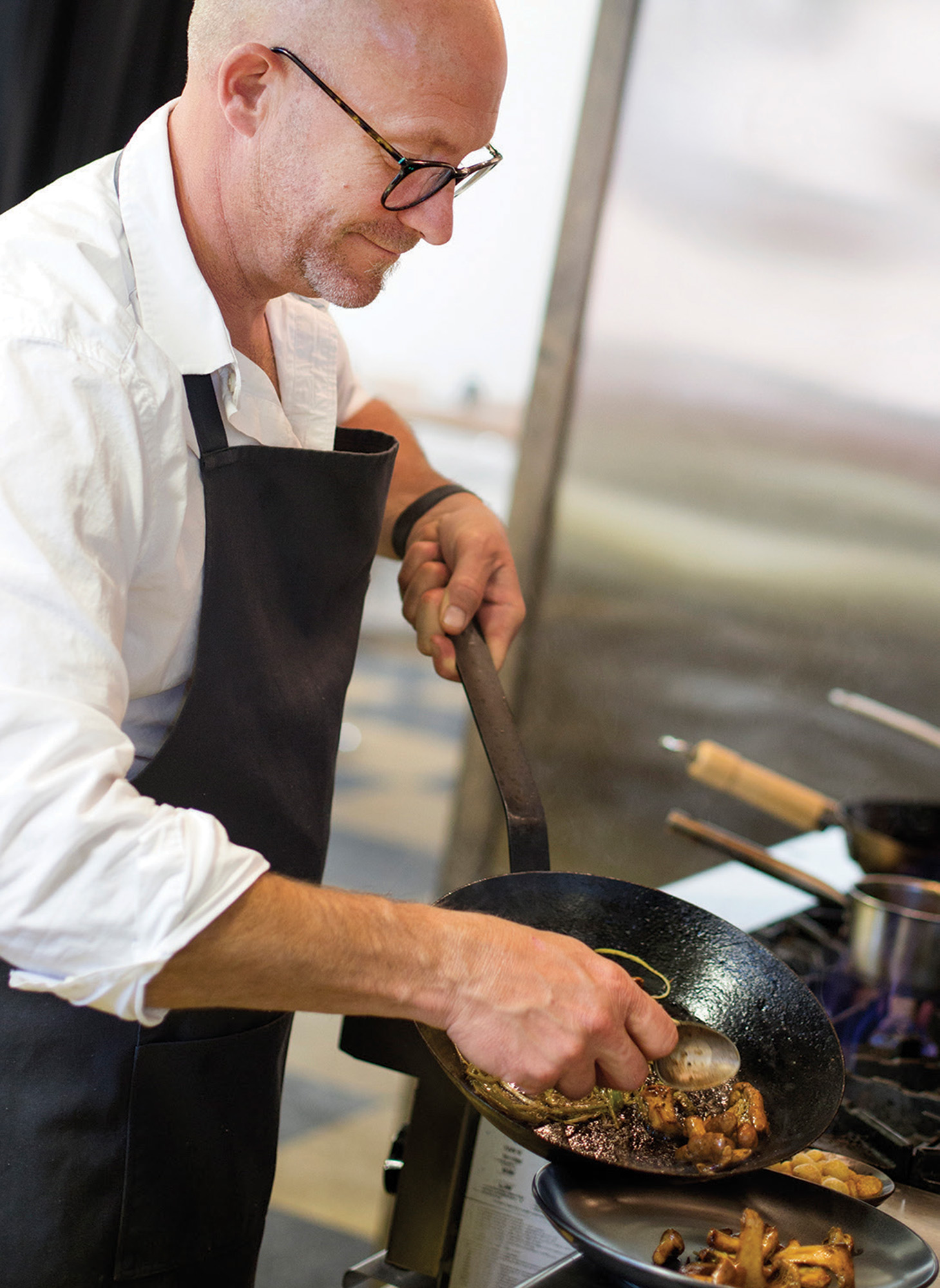 Wendell (pictured) and Chef Warren Bibbens of Olive B’s in Big Sky, Montana, often use juices from the pan to create complementary sauces for big game.