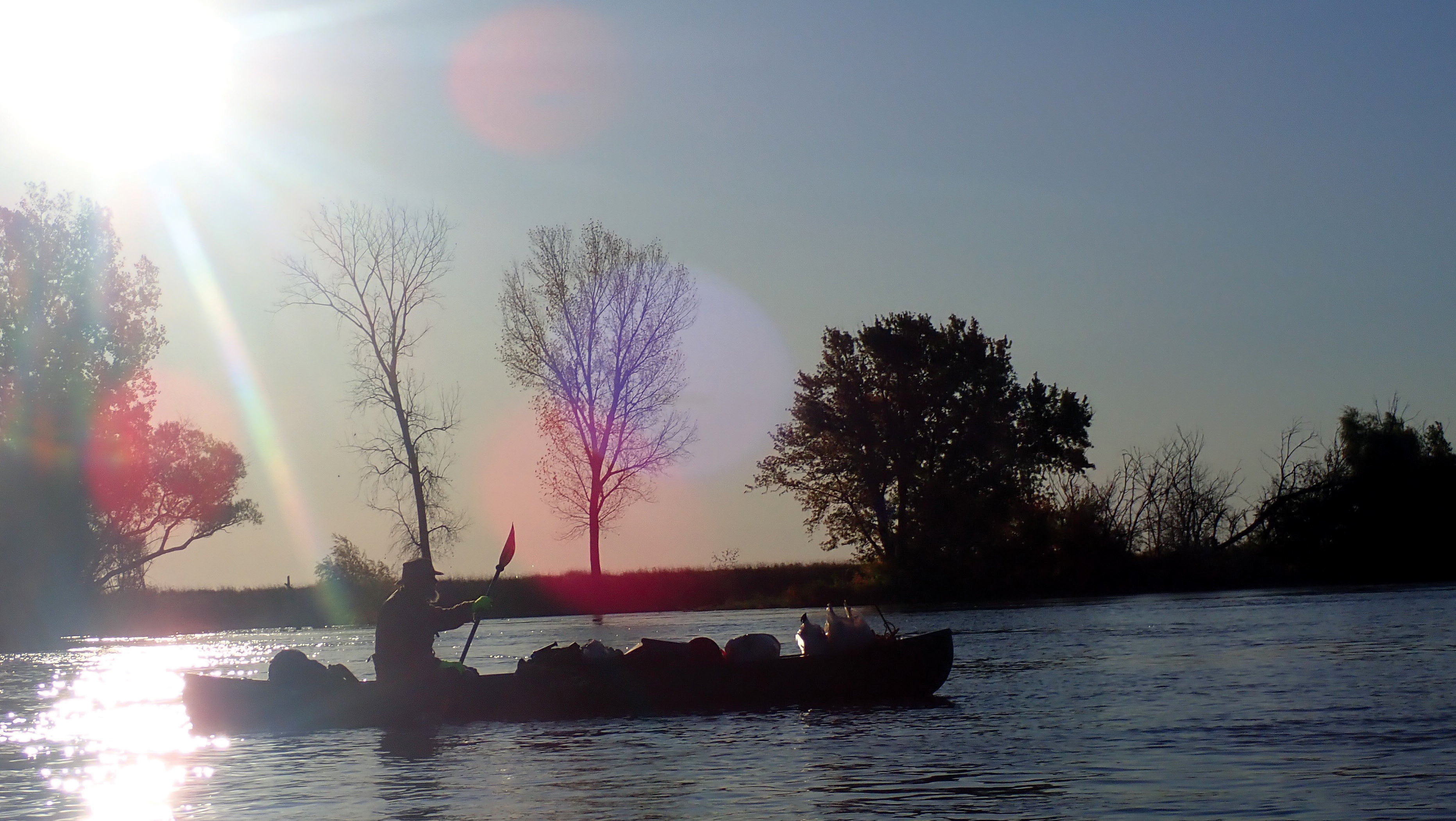 Corps of Rediscovery member Scott Robinson paddles down the Missouri River, near the border of Nebraska and Missouri, just as a cold front brought near-freezing temperatures and an end to the summer season.

04 Feb Following in the Wake of Lewis & Clark

As twilight shrouded the lingering light on the Missouri River, members of the Corps of Discovery looked toward the towering cliffs. Rising from both sides of the water’s edge, the rock walls projected toward the sky, with a channel flowing from a narrow break in the crags. “This evening we entered much the most remarkable clifts [sic] we have yet seen,” wrote Captain Meriwether Lewis in his journal about that night, July 19, 1805. “From the singular appearance of this place, I called it the Gates of the Rocky Mountains.” 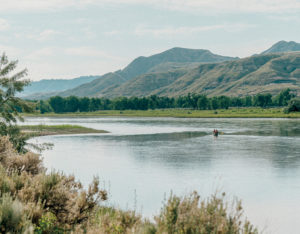 Dubbed the Corps of Rediscovery, a crew of four men retraced the steps of Lewis and Clark’s infamous journey.

More than a year into their quest to navigate from St. Louis, Missouri, up what was, to Euro-Americans, the uncharted Missouri River, Lewis and his men were compelled to press onward into the narrow river canyon, with no place to halt and camp, and not enough room to walk the shoreline and drag their canoes upstream. The men of the expedition were left to paddle against the current, traveling head-on into the unknown.

Two centuries later, on a sunny day in June of 2019, a formidable crew of four adventurers, accompanied by a handful of visitors, passed through that very same spot, just north of present-day Helena, Montana. Dubbed the “Corps of Rediscovery,” they were retracing the path of Lewis and Clark in reverse, beginning at the headwaters of the Missouri near Three Forks, Montana, and paddling canoes 2,300 miles downriver to St. Louis. The duration: five months.

Thomas Elpel, 51, the modern expedition’s stalwart leader and a resident of Pony, Montana, embraced the rugged stretch of river after a grueling paddle across lakes that were created by Canyon Ferry and Hauser dams. On the lakes, the crew endured wind, waves, and the portage of a traditional dugout canoe that weighed some 500 pounds. Elpel was eager to immerse his crew into multiple layers of a deeply powerful journey — one that explored the confluence of human artifice and the natural world, ultimately proving that by taking it slow and steady, the Corps of Rediscovery would gain a deeper knowledge of self.

The Corps of Rediscovery got its start well before their boats launched on June 1, 2019. A year prior, Elpel had fulfilled his lifelong dream of carving an authentic dugout canoe; he was instructed by the great-great-great-great grandson of William Clark, Churchill Clark, who traveled to Montana to oversee the project. The duo whittled away at an old Douglas fir, shaving thousands of pounds from the log and smoothing knots and bows. At the helm, they carved the face of a beaver, and so “Belladonna Beaver,” the 20-foot dugout canoe, was born. 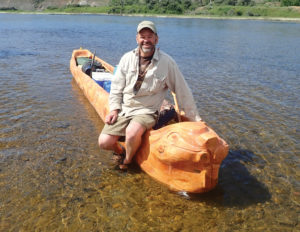 Thomas Elpel, a wilderness survival instructor and resident of Pony, Montana, hand-crafted this dugout canoe prior to a five-month journey floating down the Missouri River.

With his youngest child fledgling from the nest, Elpel was due for a journey. But it was the completion of the canoe that serendipitously set him on the path to the Missouri. “My goal in leading this Missouri River Corps of Rediscovery isn’t merely to race to the end, but rather to paddle the river as a conduit for exploring the land and meeting its inhabitants. We will be botanizing, foraging, fishing, and hunting as we explore the geographical landscape and meet the indigenous and newly integrated flora, fauna, and human habitations.” Elpel’s words, written in his journal during the early days of the trip, could nearly be mistaken for the words of Lewis and Clark.

The Lewis and Clark Expedition was commanded by President Thomas Jefferson following the 1803 Louisiana Purchase from France, which doubled the size of the U.S. The men were to study the geography, geology, and life along the river, taking the time necessary for scientific discovery.
The 19th-century crew consisted of 33 men with specialized skills that aided in the success of the journey. In preparation, Lewis himself delved into the topics of medicine, surveying, botany, and zoology, while also overseeing shopping and the construction of the keelboat they would use to travel up the Ohio River before wintering at Fort Mandan, prior to embarking on the Missouri in the spring of 1805.

Members of the Corps of Rediscovery hike overland from Fourchette Bay on the north side of Fort Peck Lake in search of bison grazing land leased by the American Prairie Reserve.

The Corps of Rediscovery also carefully planned for their journey. They read Stephen Ambrose’s biography of Lewis, Undaunted Courage, and freshened up their bushcraft skills. Elpel, a wilderness survival instructor and author on the subject, hand-picked his comrades, forging a crew of able men who could learn from one another. The party included Chris Dawkins of Puget Sound, Washington, a student of bird language and tracking; John Gentry of Robbins, Tennessee, a certified Wilderness First Responder; and Scott Robinson, a GPS navigator from Boulder, Colorado.

“We were now about to penetrate a country at least 2,000 miles in width,” Lewis wrote upon departing from the Mandans on April 7, 1805. “This little fleet altho’ not quite so rispectable [sic] as those of Columbus or Capt. Cook were still viewed by us with as much pleasure as those deservedly famed adventurers ever beheld theirs; and I dare say with quite as much anxiety for their safety and preservation. … These little vessels contained every article by which we were to expect to subsist or defend ourselves.”

As Lewis and Clark set out into the unknown, in many ways so too did Elpel and his men. “Something of this magnitude and duration drums up fear in you,” Robinson, 52, says over the phone after completing the journey. His voice is measured, but rolls with an air of glee. “You either say yes to the adventure and go do it, or you say no. It takes courage.”

Equipped with a bow saw for cutting firewood, a rusty pan to hold fires, collapsible canvas buckets for water, a fishing bow, and an old couch cushion used to mop water from the canoes, the modern paddlers endured 156 days in the elements. The majority of the days were characterized by sun, wind, or mud, and sometimes all three, while most nights were spent in tents beneath the stars, hoping wind or rain wouldn’t disrupt their sleep.

Elpel took quiet moments to journal in his tent, bare feet, encrusted with dried mud, extended out the door.

Weather was a frequent cause of delay, and the hardship of navigating each of the 15 dams on the Missouri’s main stem loomed ominously at the start: They had 700 miles of flat water to paddle, moving just one painstaking arms-length at a time. “On the trip, there were numerous times I was afraid,” Robinson says, describing his initial fears of inadequacy, and lack of self-confidence. “You decide to go, sum up your fears, face them, and overcome them. You put together your own [mental tool] kit, and put the canoe in the current.”

After fighting through Montana’s Canyon Ferry, Hauser, and Holter lakes, as well as portaging around the Great Falls, the paddlers restocked in Fort Benton, then descended into the section known as the Upper Missouri National Wild and Scenic River. During the 300 miles between supply runs at Fort Benton and Fort Peck, they endured 70-mile-an-hour winds. 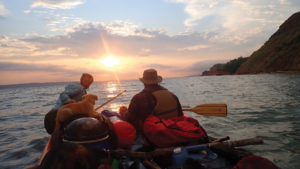 The crew heads toward the rising sun on Lake Sakakawea in North Dakota.

After pressing on through Fort Peck, the crew paused near Wolf Point, nearing the North Dakota border. In town, they picked up a stray dog, naming it Jubilee. She accompanied the paddlers through the rest of their journey, much in the fashion of Lewis’ Newfoundland named Seaman.
While challenge dogged the crew, they also were accompanied by reverence for a magnificent land of bounty — not unlike Lewis and Clark were. Kestrels fed their chicks in cottonwoods lining the river, while deer fawns nestled in the grass and bald eagles perched on surrounding cliffs.

Floating during the second-highest runoff year since record-keeping began 121 years ago, the Corps of Rediscovery witnessed streams of trash merging into the current, as well as persistent floodwaters that took hold of campsites and communities downriver in Nebraska and Missouri (where some of the crew learned the hard way where not to pitch a tent).

The expedition took extra time to explore historical landmarks and natural features. Traveling in the wake of the Corps of Discovery, Elpel says it was impossible to forget the subsequent destruction of the bison, genocide of indigenous people, and vast urbanization of the West. But in re-exploring the path of Lewis and Clark, and stopping at sites like the First Peoples Buffalo Jump State Park in Ulm, Montana, or the Lewis and Clark Interpretive Center in Sioux City, Iowa, the paddlers internalized a rare understanding of where we are today.

“Some people celebrate Lewis and Clark as famous explorers. Others condemn them as the leading edge of colonization and the usurping of Native American land and rights. I judge them as men of their time, bound by the beliefs and customs of the day,” Elpel wrote in his journal. “That’s the great challenge in celebrating American history. … We cannot and should not bury our history, but we can own it and re-interpret it.”

The Corps of Rediscovery passed beneath the iconic Gateway Arch in St. Louis on November 3, 2019, hugged on all sides by a heavy frost and orange-tinged autumn leaves. At the confluence, where the Missouri merges into the great Mississippi, turbulence is absent, the waters simply flow together like a lake.

Learning from the River

At home in Montana, Elpel looks out at the world with bright eyes that now hold onto a more intimate picture of what it means to be an American. On the heels of five months of self-immersion into a key part of our country’s history, he’s quiet and deliberate. He pours a cup of herbal tea that’s brewed over a wood cookstove in the kitchen of the passive-solar stone and log home that he constructed by hand. He’s carefully compiling his notes from the journey, crafting a book slated for release this spring.

“It was interesting to follow along with the journals [of Lewis and Clark]. Change happens incredibly fast. We took five months to explore that; it really puts it up front,” he says. “We’ve created such a different world.”

Rather than a hard paddle to the end — an adventure and subsequent conquering of the river common in the adrenaline-heavy extreme sports of today — the journey Elpel describes was an unabridged experience of the river and everything that goes with it. “For the most part, we were like turtles on a log,” he says.

Moving at river-time, the paddlers say, allows space for mental reflection and growth. And while Elpel says the experience hasn’t drastically changed his life outlook — he’s been on enough long walk-abouts and paddle trips to simply call it his way of life — Robinson embraced the Missouri trip as the first step toward a life of adventure, having quit his job as a mechanical engineer just before the excursion.

“They say the river teaches you what you need to know,” Robinson says. “You let your mind wander. Where it wanders helps you understand the struggles you have internally. We need to learn to say yes to these adventures. Otherwise we have regrets. You’ve got to follow your passions and your bliss.”