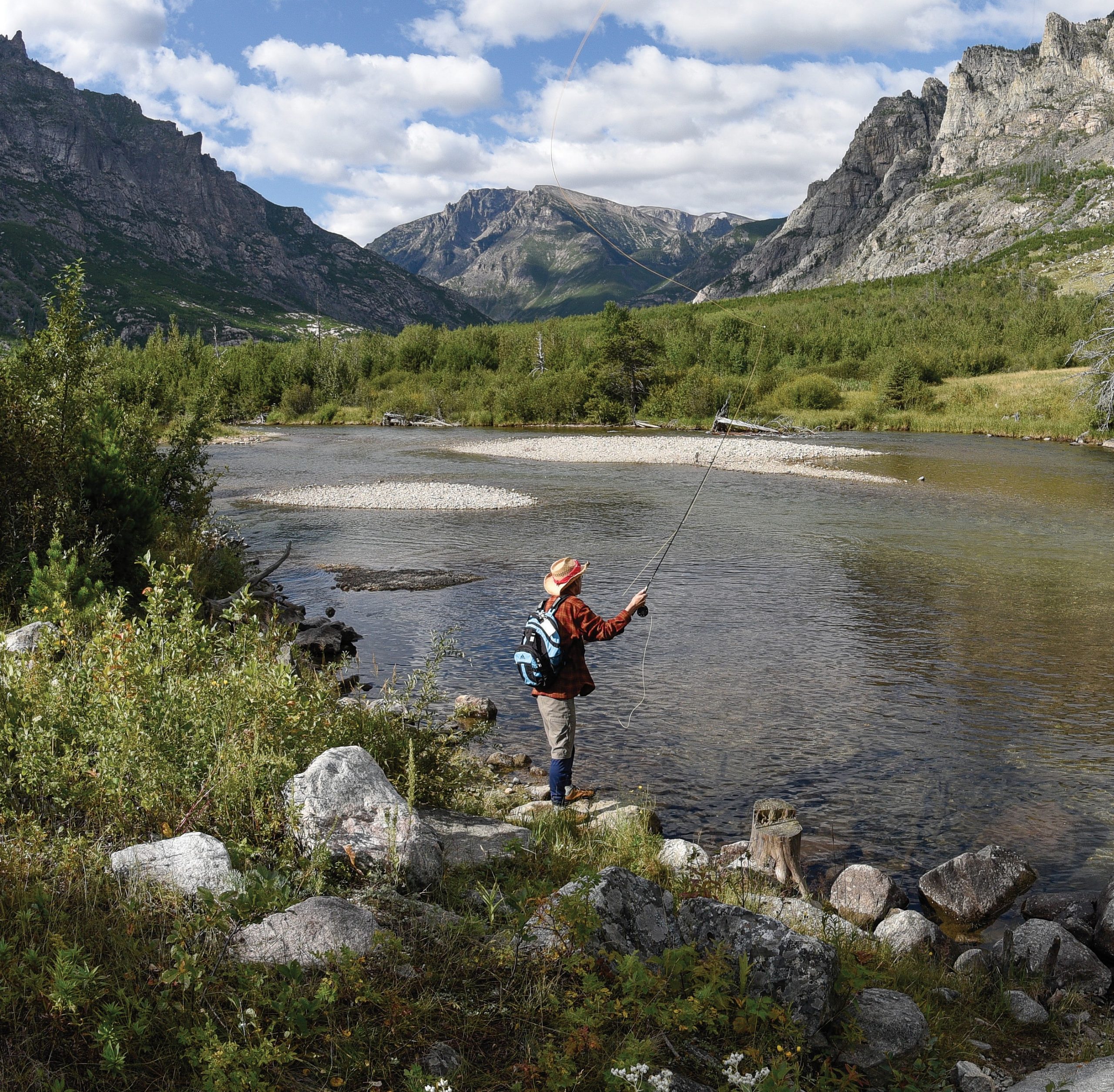 In 2018, the upper 20 miles of East Rosebud Creek — which rushes out of Montana’s Absaroka Mountains — became the state’s latest stream to be protected under the federal Wild and Scenic Rivers Act. It was the first designation in Montana since 1976, when portions of the upper Flathead and Missouri rivers were listed. There are now 388 conserved river miles in Montana, still well under 1 percent of the state’s total stream mileage.

Our anticipation swells like the massive Beartooth Range that stands prominently before us. My traveling companion is my wife, Mary, and we’re heading up Montana Highway 78 from the mouth of Rosebud Creek in the Stillwater River Valley, nearing the quaint town of Absarokee. We wind through expansive ranches across the tawny high plains, with panoramic views that roll over us like Pacific typhoon waves. Increasingly, the tableau morphs to a Swiss-, Norwegian-, or New Zealand-like, glacially carved, waterfall-riddled alpine wonderland. Snaggle-toothed granitic thrones soar from the Beartooth Plateau high above the crystalline creek, which races out of the 1.2-million acres that make up the Lee Metcalf and Absaroka-Beartooth wilderness areas. The only lingering question: Which fork should we explore first, east or west? 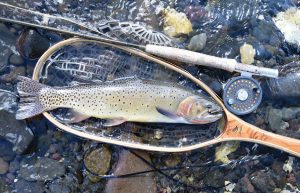 Yellowstone cutthroat trout are native to the Rosebud watershed, an expanse they now share with rainbow, brown, brook, and even golden trout in select alpine lakes.

Ultimately, we follow Yogi Berra’s paradoxical, Zen koan advice: “When you come to a fork in the road, take it.” With the right place and perspective, you can’t lose. Montana’s newest designated Wild and Scenic stretch of river wins the first fork choice. As we take a beer break on a gravel bar on East Rosebud Creek, I luxuriate in the splendor, taking measure of a perfect run: a slow, deep, cover-laden haven that native Yellowstone cutthroats crave. Even on a warm, late-summer day, snow patches large enough to ski still shimmer around the highest wilderness promontories, the country’s largest expanse of land above 10,000 feet, with numerous summits exceeding 12,000 feet. These melting snowfields feed the Rosebud watershed, keeping streams cool and flush even on the warmest dog days.

I riffle through terrestrial boxes, which cage garish, Frankenstein-like monsters with trimmed deer-hair heads, alluring red bodies, and long twitchy legs. Alternatively, a smaller, slightly more subtle attractor might pay dividends, like a Humpy or Royal Wulff. I’m typically indecisive, but it’s nice to have such enticing choices. Ultimately, cutts will express their opinion, perhaps with slow, submarine-like rises, disdainful nose bumps, and victorious retreats to safety. Or, depending on where I’m fishing, the strike might come from an electric rainbow, showy brookie, or bulldog brown. Of the latter, large fall spawners running up the Rosebud from the Stillwater or even the Yellowstone River might attack a swinging streamer with the controlled ferocity of a mountain lion. 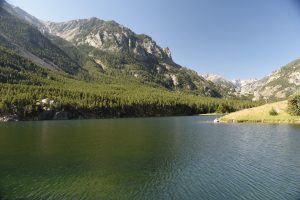 The Rosebud drainage contains dozens of gem-like lakes and trout-filled ponds, with most requiring a hike or horseback ride to reach them in the Absaroka-Beartooth Wilderness. Others, like West Rosebud Lake, are accessible by Forest Service roads.

There are also galaxies of alpine headwater lakes in this area, and many are accessible only by long, butt-busting hikes and horse trails that snake deep into the wilderness, including the epic 26-mile trans-Beartooth “Beaten Path” route. Ambitious anglers might even pursue the Holy Grail — flashy golden trout — in tarns like Sylvan Lake. Lower down and more accessible are Emerald, East and West Rosebud, and Mystic lakes.

One morning on West Rosebud Lake, Mary spots a salmon-like trout with flanks the size of a canoe paddle blade vanish into the depths before we can fetch rods. And working afternoon risers on Emerald, I connect with a rocket-fueled fish that leaps and slips the hook, as I prematurely assess where to beach it. The phantoms of the fly angler’s imagination are just as real, important, and memorable as the trout landed. 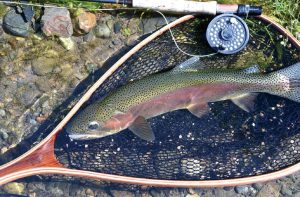 The Rosebud drainage has long hidden below the radar, overshadowed by larger, blue-ribbon Montana icons like the Yellowstone and Bighorn rivers. That’s just fine with fans like us, who are content to evade summer drift-boat parades on the Missouri or Madison rivers. Anglers might spot a kayak on Rosebud whitewater, but its multi-hued boulders and pinball rapids can punish watercrafts. For those who enjoy hiking with graphite wands, however, there is room to roam. It’s the kind of place where you spot cottony, cross-country jet contrails at 35,000 feet and think, “Twenty-first century, kinetic, high-tech civilization still lurks out there somewhere; but not here.”

That’s particularly true in the wilder upper reaches, encompassed by the Custer Gallatin National Forest. The East Fork has a pair of peaceful campgrounds, Jimmy Joe and East Rosebud. On the West Fork, there are two more: Pine Grove and Emerald Lake, the latter offering both stream and lake options. Lower down, on the outskirts of the tiny town of Fishtail, a state fishing access site — Rosebud Isles — also affords streamside camping.

Further upstream in the Absaroka-Beartooth Wilderness, there are a number of spectacular backcountry camping options. For those with Olympic-caliber stamina, Granite Peak — Montana’s highest at 12,807 feet — rears above the East Fork headwaters, beckoning intrepid mountain climbers. Feeding the West Fork is Grasshopper Glacier, famous for millions of ancient frozen locusts, possibly entombed by a blizzard while undertaking an ill-advised migration. This top-of-the-world terrain is anchored by Montana’s oldest Precambrian rock — approximately 3.2 billion years old and among the planet’s earliest. And while the remaining glaciers are receding, the enormous flowing Beartooth ice fields were once thousands of feet thick.

The East Fork road ends at East Rosebud Lake — another glacial remnant — and the sleepy community of Alpine. A Forest Service sign there lays out local history:

The Beartooth Mountains stirred the soul of Swiss-born Fred Inabnit. After moving to Montana in 1890, the East Rosebud Lake area became his ‘favorite place on earth — his little bit of Switzerland,’ and he went on to ascend almost 50 Beartooth summits. When few trails existed and maps were very primitive, his vast knowledge of this area was renowned. 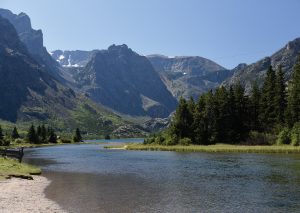 Both East and West Rosebud creeks offer miles of public water, Forest Service campgrounds, and trails that wind back into the surrounding wilderness.

Conservationists celebrated in 2018, when the upper 20 miles of East Rosebud became Montana’s latest stream protected under the federal Wild and Scenic Rivers Act. It was the first in Montana since 1976, when portions of the upper Flathead and Missouri rivers were listed. Considering Montana’s exceptional abundance of high-quality streams, the state lags behind some of its Western neighbors in designating Wild and Scenic Rivers. To date, there are 388 conserved miles, well under 1 percent of the state’s total stream mileage.

Impressively, even in today’s polarized political environment, the proposal garnered support from a broad-based coalition and Montana’s entire Congressional delegation. The threat of a new hydro-power facility galvanized residents, assisted by the organizations American Rivers and Friends of East Rosebud Creek. Activists pointed to West Rosebud, where the Mystic Lake Hydroelectric Plant interrupts the stream’s natural flow, as Wild and Scenic River status prohibits new dams and diversions, along with implementing other conservation measures.

Wild and Scenic River provisions conserve many excellent Western salmonid streams, including Wyoming’s upper Snake, Idaho’s St. Joe, and Oregon’s Deschutes. When Congress passed the original 1968 legislation, it stated that rivers that “possess outstandingly remarkable scenic, recreational, geologic, fish and wildlife, historic … or other similar values, shall be preserved in free-flowing condition, and that they and their immediate environments shall be protected…”

And according to American Rivers president and CEO Bob Irvin, “This is a great victory for public lands and waters. … We applaud the local residents who have worked so hard. … Protection of East Rosebud Creek enjoyed strong bipartisan support. This is a great example of how, despite political differences, rivers connect us, and how we all benefit when we protect healthy rivers.” 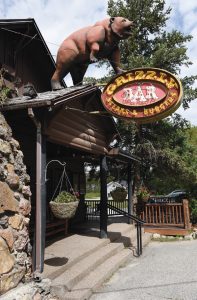 Near East Rosebud Creek, in the tiny town of Roscoe, the iconic Grizzly Bar has been nourishing and quenching the thirst of locals and visitors for decades.

Fly anglers can easily exhaust an adventurous cat’s proverbial nine lives exploring the Rosebud’s spectacular, watery maze. But eventually folks need to resupply or experience culture, Montana style. Closest to the upper Rosebud, the Fishtail General Store has a bit of everything — as it has since 1900 — including beer, deli sandwiches, and the store’s handcrafted sausages. Next door, the Cowboy Bar helps to entertain residents and visitors alike. And just down the road, the town of Absarokee is larger, even offering a full-fledged grocery store.

The East Fork hamlet of Roscoe — nearly a mile high and supposedly christened after an early resident’s horse — is home to a Montana institution, the Grizzly Bar. A massive, growling bruin atop the log structure’s entrance tells you all you need to know: At various moments in time, this has often been the place where indelible memories were created. 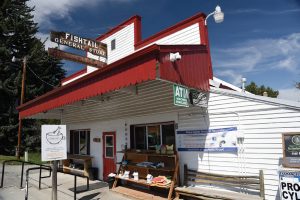 The historic Fishtail General Store has helped to supply travelers headed into the sprawling Rosebud backcountry since 1900.

Finally, if you need a break from fishing, there’s no need to road trip all the way to the cosmic-cowboy, hipster-haven of Marfa, Texas, to see world-class outdoor art. The Tippet Rise Art Center is located on a 12,000-acre ranch near Fishtail, with sculptures scattered across the sprawling fields. And all the while, the Beartooths provide a jaw-dropping backdrop, like a scene from the iconic Western film “Shane.”

Few describe the Rosebud and Beartooth country’s beauty more passionately than Inabnit — who likely would have rejoiced over the East Fork’s Wild and Scenic designation — when he said, “I should like to impress on others the life one gets out of a trip to this wild country. I know the benefit of a vacation, and I know that mountain range — what I would not give to be able to tell the people of the exhilaration, ecstasy, and high ideals to those who will only stop to see.”