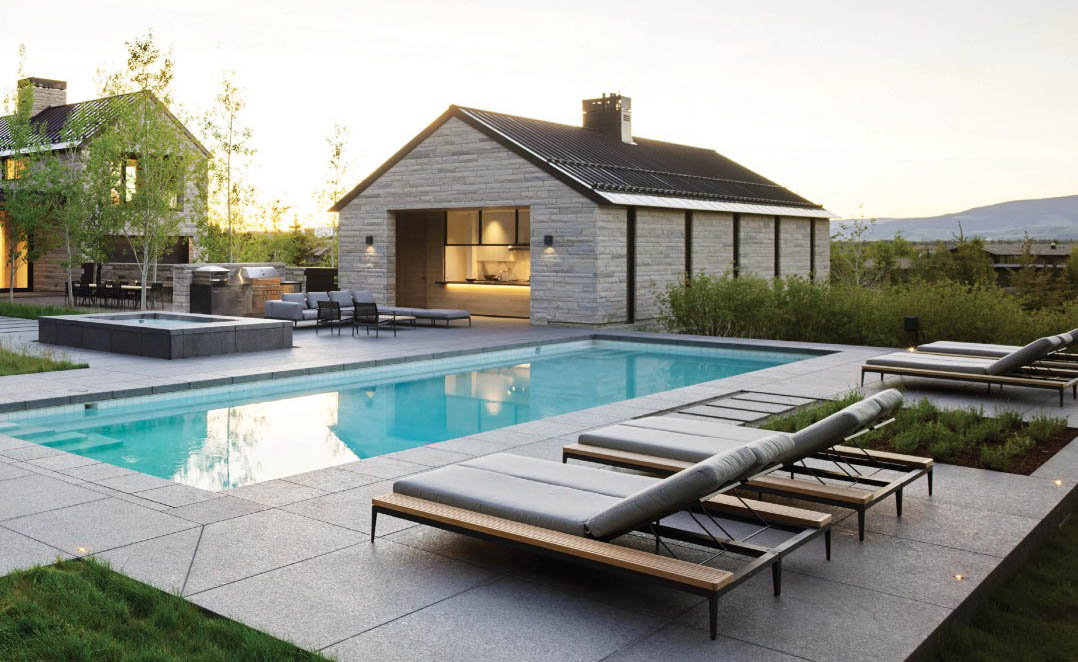 Four of the five limestone-clad buildings that make up the Five Shadows residence in Jackson Hole, Wyoming, demonstrate the subtle fashion in which each structure, or pavilion, is simultaneously attached yet separate. The bulk of the buildings are devoted to living spaces, while the pool pavilion on the far right is anchored by a pass-through bar and kitchen area.

An award-winning home that subtly casts its spell across a scenic meadow at the base of the Tetons — arguably Wyoming’s most storied mountain range — bears the name Five Shadows, derived from the number of buildings, or pavilions, that make up the residential compound. It’s a name that also evokes the substance of human structures where they sit upon the landscape, each one possessing a central purpose, from the great room pavilion to the master bedroom pavilion. Four of the structures are connected by walkways, and all by consistency in design and likeness of materials and decor. 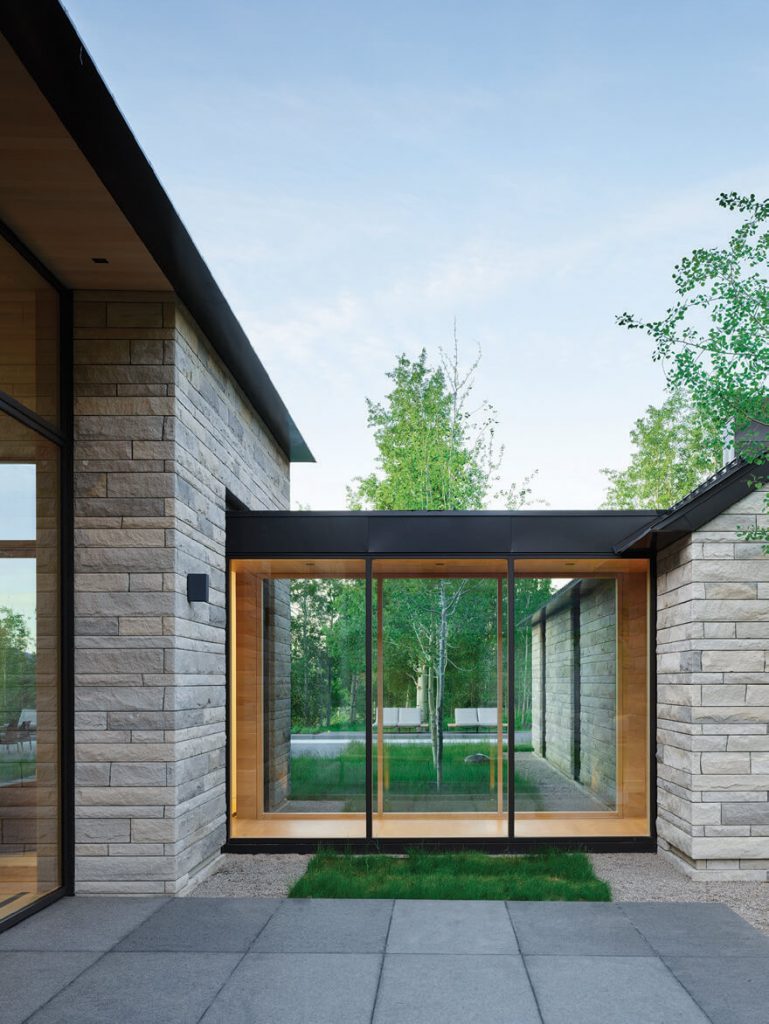 Glass-enclosed heated hallways connect the home’s pavilions and create a sense that one is walking outdoors in nature while passing from one space to another.

What’s remarkable about Five Shadows is its lightness of being, an achievement of airiness in buildings that are constructed of stone, wood, glass, steel, and plaster, with strategically placed and precision-crafted windows and doors that open to natural light. Glass is the chief element in the connecting walkways and in the rooms, where each window seems to frame views of trees, plants, peaks, and sky, creating the illusion that there is no separation between the handiwork of nature and the art of man. 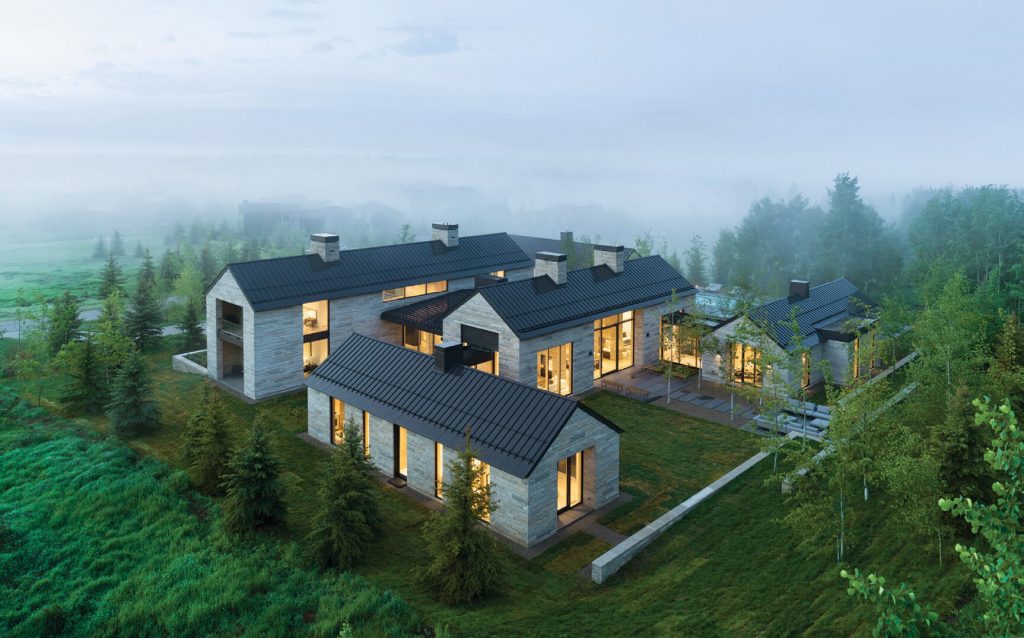 The stone pavilion concept is modeled after agrarian forms — notably an assembly of related structures — in a salute to the ranch properties that once dotted the landscape. The windows of Five Shadows were carefully placed to showcase the stunning views.

The residence, designed by CLB Architects, garnered the 2020 Award of Excellence from AIA Wyoming, an honor that underscores the firm’s motto “Inspired by Place.” And the design group, with locations in Jackson Hole, Wyoming, and Bozeman, Montana, is equally inspired by projects that call for creating a partnership that includes clients, architects, builders, interior designers, and others who contribute to bringing a vision to life that could only come from collaboration. 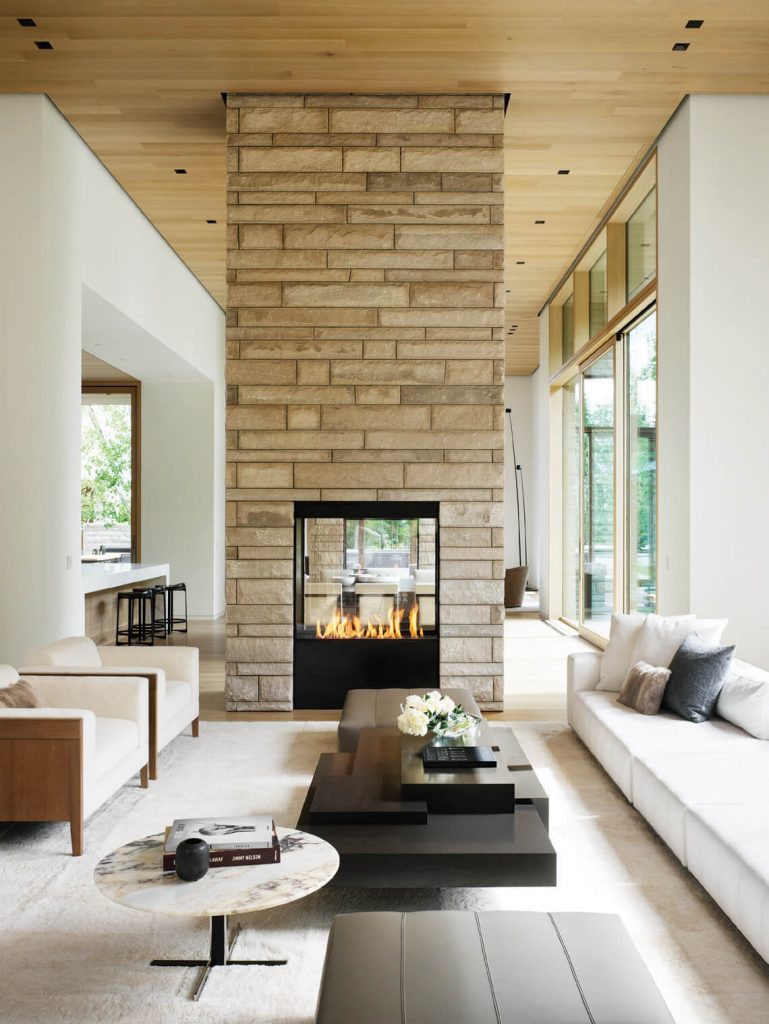 The view is highlighted from the family room through the limestone fireplace, which helps define the smaller spaces within a more expansive room.

Sam Ankeny, an associate with CLB who worked on the project alongside fellow architects Eric Logan and Andy Ankeny, says the simplicity of the structures that make up Five Shadows belies the complicated geometries entailed in a compound that seeks to mimic agrarian forms in an assembly of linked but separate buildings. And what is unobserved by the eye in the 9,000-plus square feet of livable space — including six bedrooms and several family rooms — deepens the sense of calm, or repose, which is yet another notable, but unexpected, aspect of the home. “The buildings contain hidden symmetries that act as guidelines,” Sam Ankeny says. “For example, if you look at the plan from a bird’s-eye view, every connector centers on another part of the building. Humans naturally seek comfort in symmetry and, while you don’t want a project to be a slave to that, it’s an organizational element.” 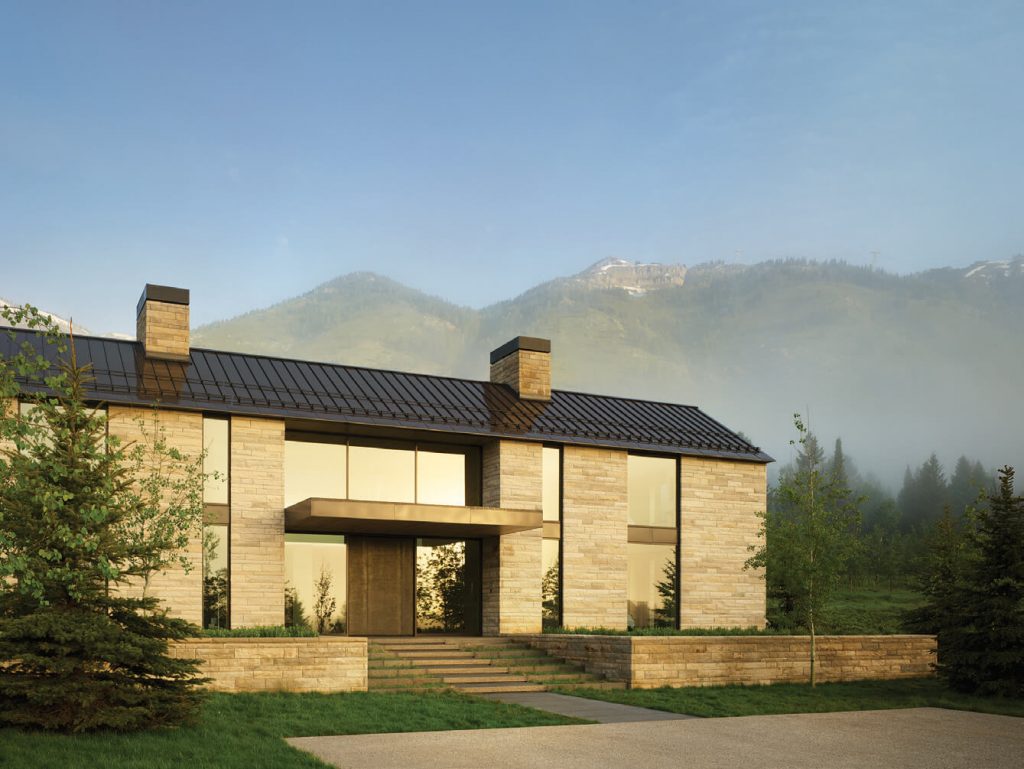 The home’s entry displays the rigorous geometry and symmetry of the compound’s design.

The sweeping height of the home’s primary entry gives way to a hall, multiple living spaces, kitchens, and dining areas, all of which are strategically segmented to provide varying degrees of privacy. Tucked to the side of the entryway, and leading to upper-story bedrooms, are stairs made from the same bleached and stained rift-sawn white oak that’s featured on certain walls, floors, and ceilings throughout the home. The wood, paired with a blend of silver-tipped limestone and the periodic use of blackened steel and white marble, creates what Ankeny calls the meticulously curated palette that speaks to the homeowners’ minimalist approach, one which ultimately infuses the structure with both light and warmth. 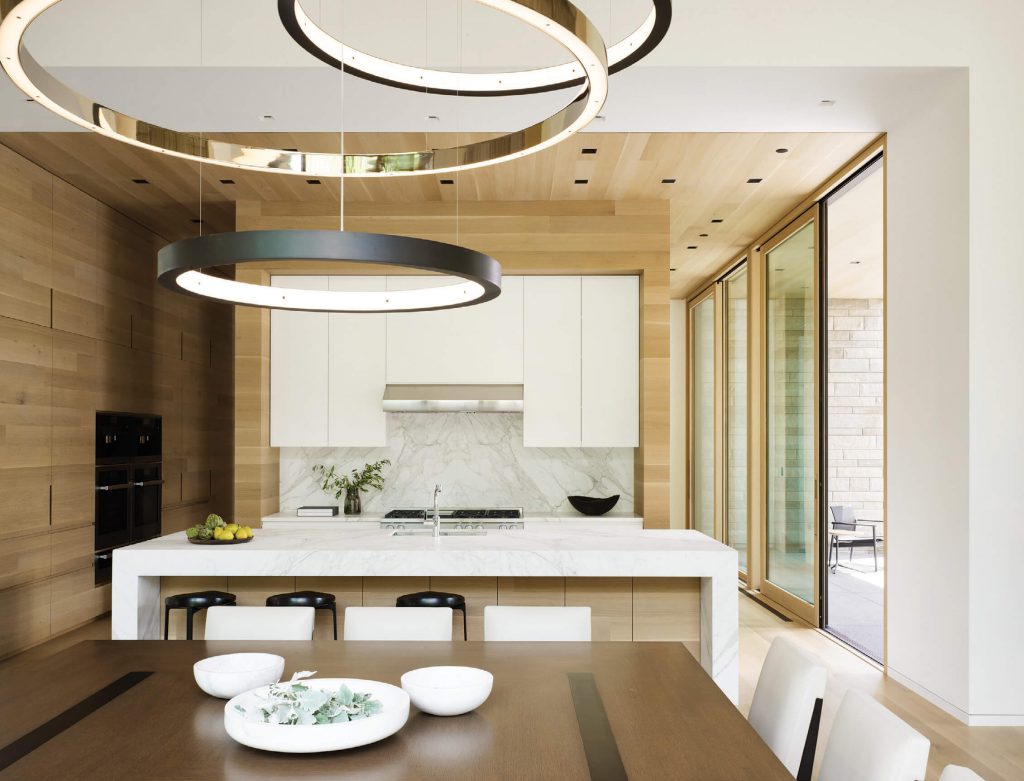 The kitchen features a simple material palette — notably marble and wood — and clean lines. The custom dining table is balanced by a wall of discrete integrated appliances on the left.

With amenities that range from media and theater rooms to an outdoor pool, the house is adapted to the lifestyle of its owners. And tying outside activities and entertainment to the interior was a goal of interior designer Philip Nimmo, owner of Philip Nimmo Design, based in West Hollywood, California. Nimmo’s choice of colors, which he describes as “wonderfully neutral,” emphasizes the clean lines found in forms, furniture, and fixtures throughout the home. 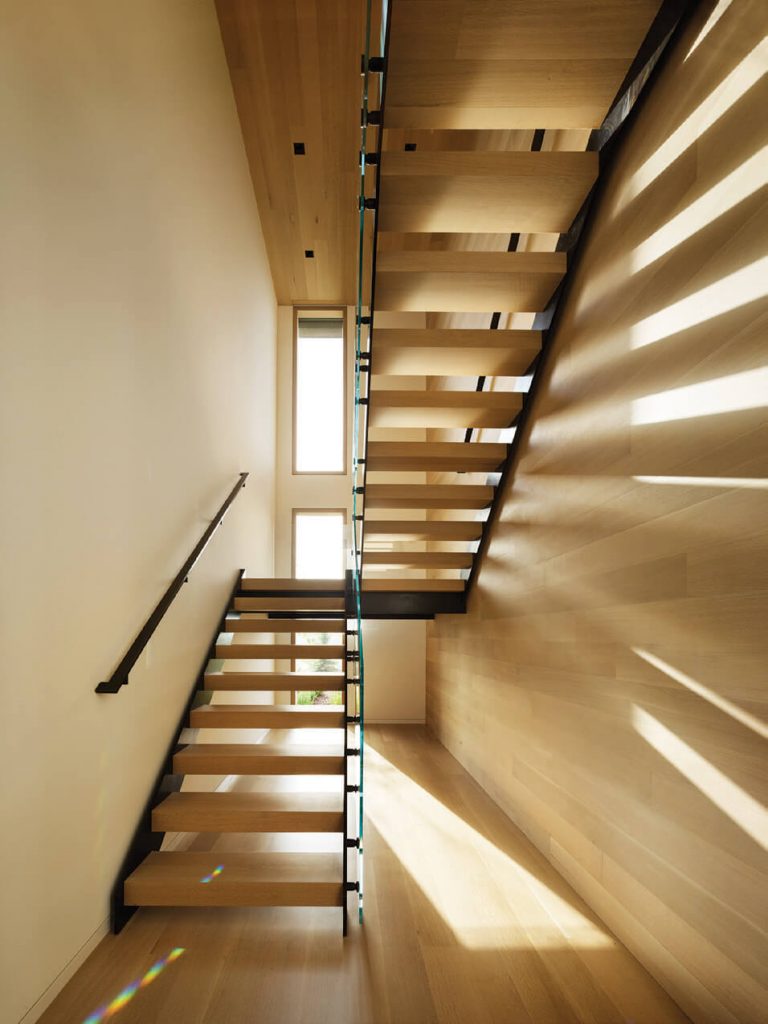 The stairs to the upper-level bedrooms are made from rift-sawn white oak, the same material found on many walls and ceilings. The open design of the stairway allows natural light to shine through.

In the great room building, which includes a family room and dining room among several other spaces, Nimmo used a carpet of white-cream shearling as a component of continuity. But it’s also a statement about the house itself, a tactile representation of the combination of such qualities as comfort and luxury. He also softened angles by positioning furniture — from a Minotti sofa to a custom elliptical table designed by Nimmo — so that they appear to float. 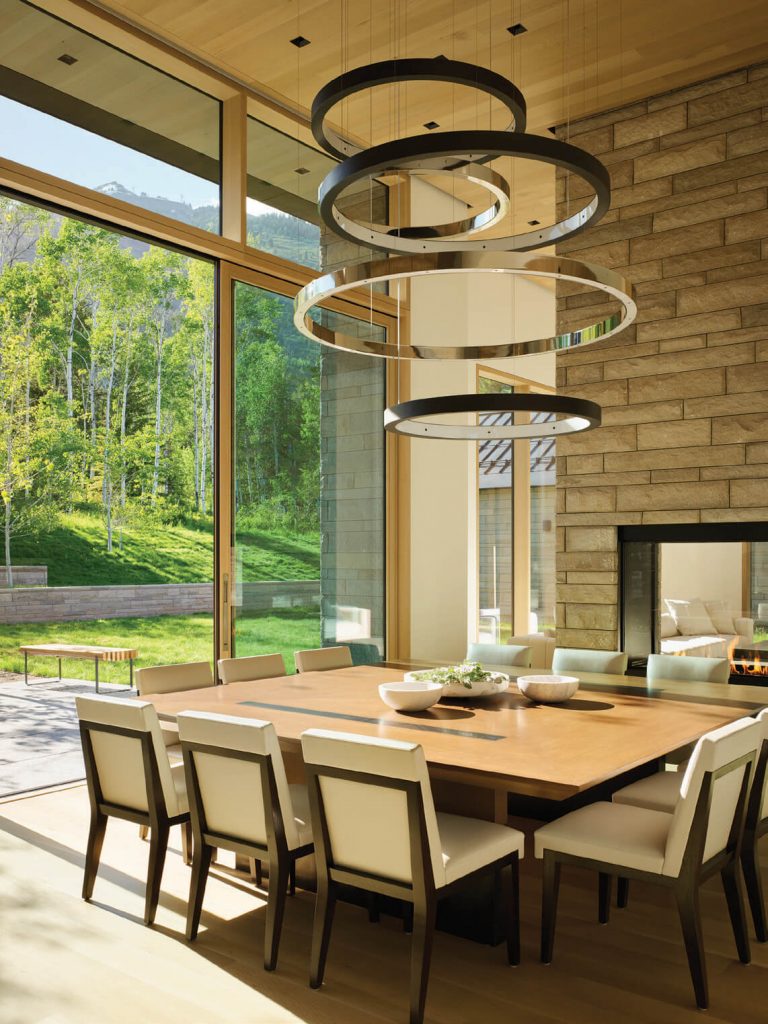 In the great room, “All the furniture had to float; nothing in the room is against the wall,” Nimmo notes. “Floating the furniture created a circular energy, in which nothing is blocked; there is breathing room everywhere.” 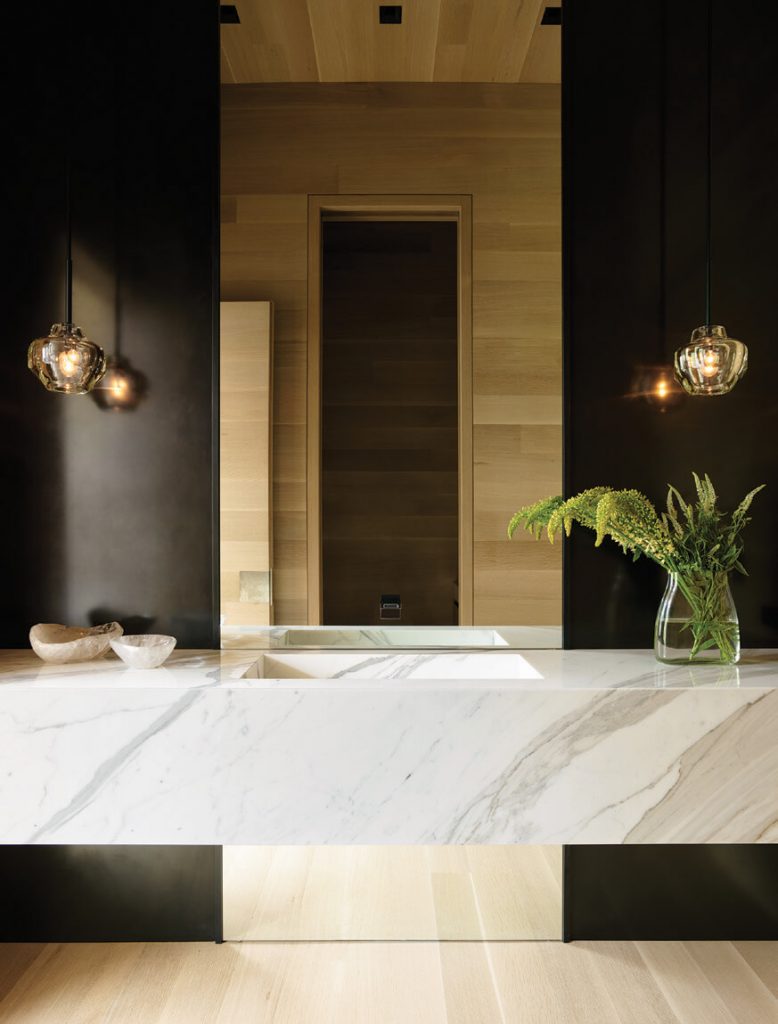 A powder room echoes the simplicity found elsewhere in Five Shadows; in this case, purity and elegance are achieved by the use of marble and blackened-steel wall panels.

That breathing room is echoed in the surroundings of the property, which is slightly elevated, allowing valley views that give rise to the Gros Ventre Range. The heated walkways that connect the pavilions similarly refer to the outdoors, with landscaping by the Jackson Hole-based Hershberger Design and every detail of construction scrutinized and executed by KWC Construction, also of Jackson Hole. 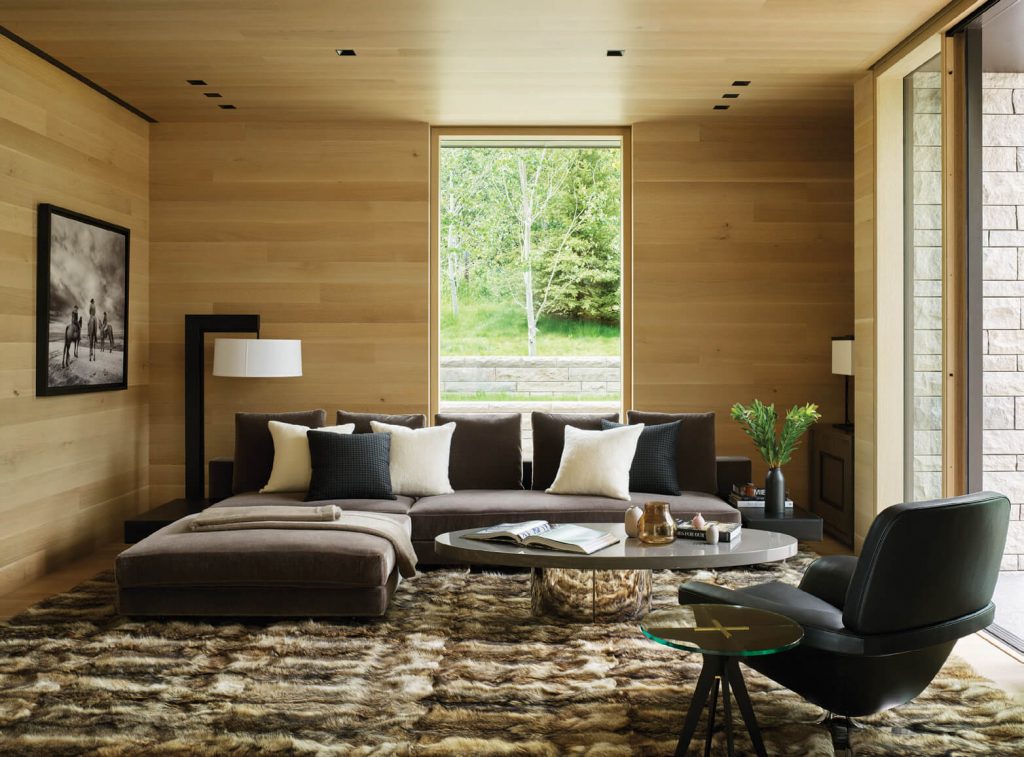 The windows in the study allow the natural setting outside to be the focal point.

The angular appearance of wall cabinets is evident in the marble bar in the sleek kitchen that backs up to a galley-style chef’s kitchen. In a sign of the success of the light touches, which bear the substantial weight of tying the buildings together, two fireplaces in the central pavilion are framed by limestone, while glass opens to the interior and exterior views. 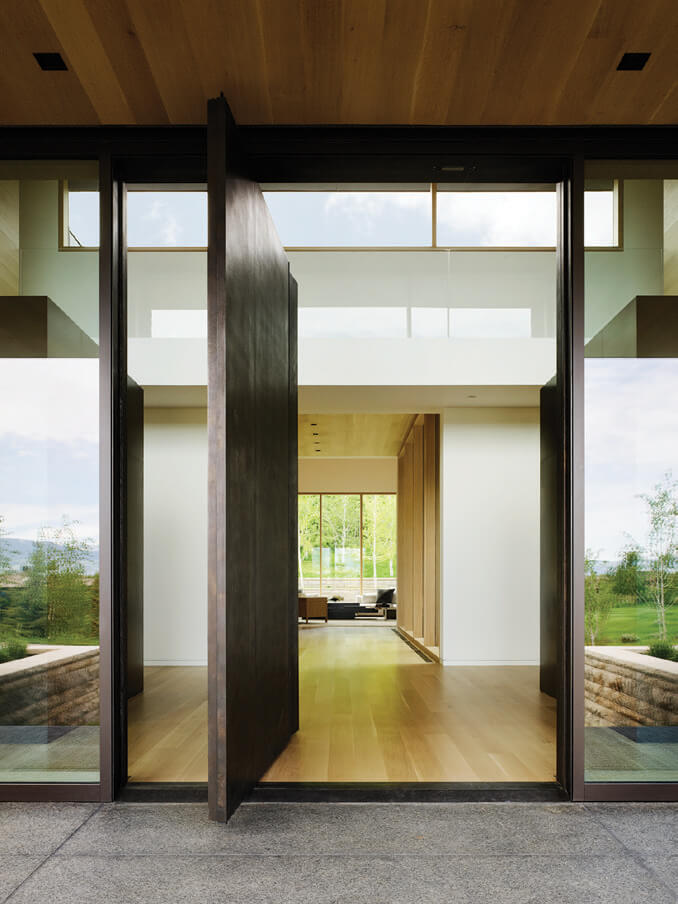 A custom steel pivot door serves as the home’s entrance.

Many elements of Five Shadows were initially envisioned by the homeowner, whose affinity for simplicity is abundantly apparent in the structures. The five years needed to complete the project are a testament to the care, craftsmanship, and exactitude that informed it. 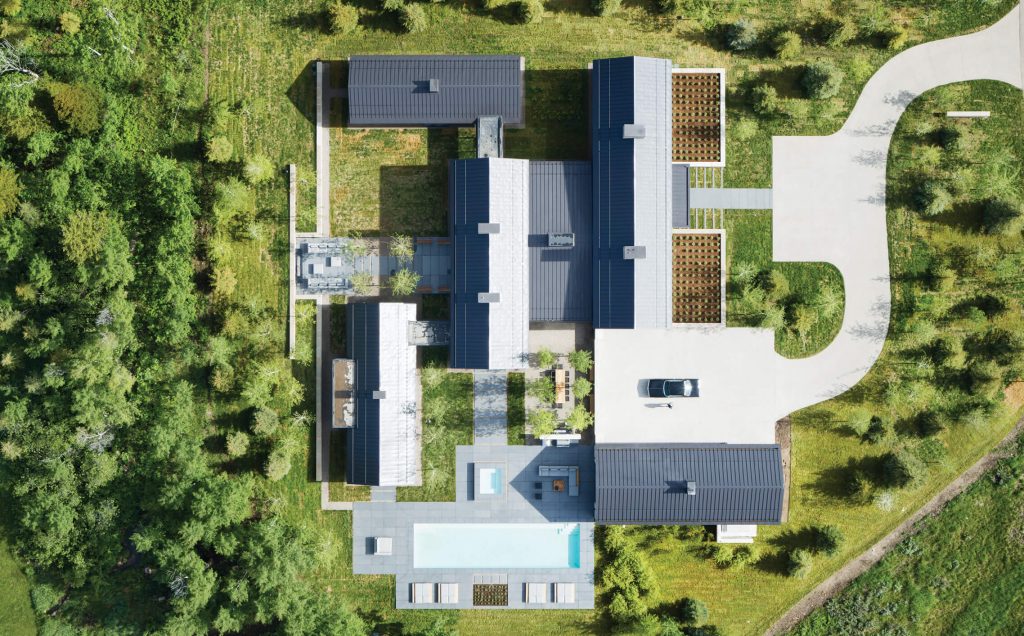 An aerial view shows the five pavilions and their shadows, from which the house takes its name. The outdoor living spaces take advantage of different environmental exposures.

Visitors, the homeowner says, have commented about being strongly attracted to the home, invariably acknowledging the air of tranquility and the absence of visual dissonance without being able to fully explain the feeling. He believes a fitting metaphor for Five Shadows is the large-scale triptych photograph featured in one of the interior walkways. The scene suggests white panels broken by a dark and thick horizontal line. What the photograph actually depicts — which is perceived only over time — is the Snake River surrounded by snow. In the same fashion, Five Shadows is replete with intricate design achievements that are ultimately revealed to the eye. 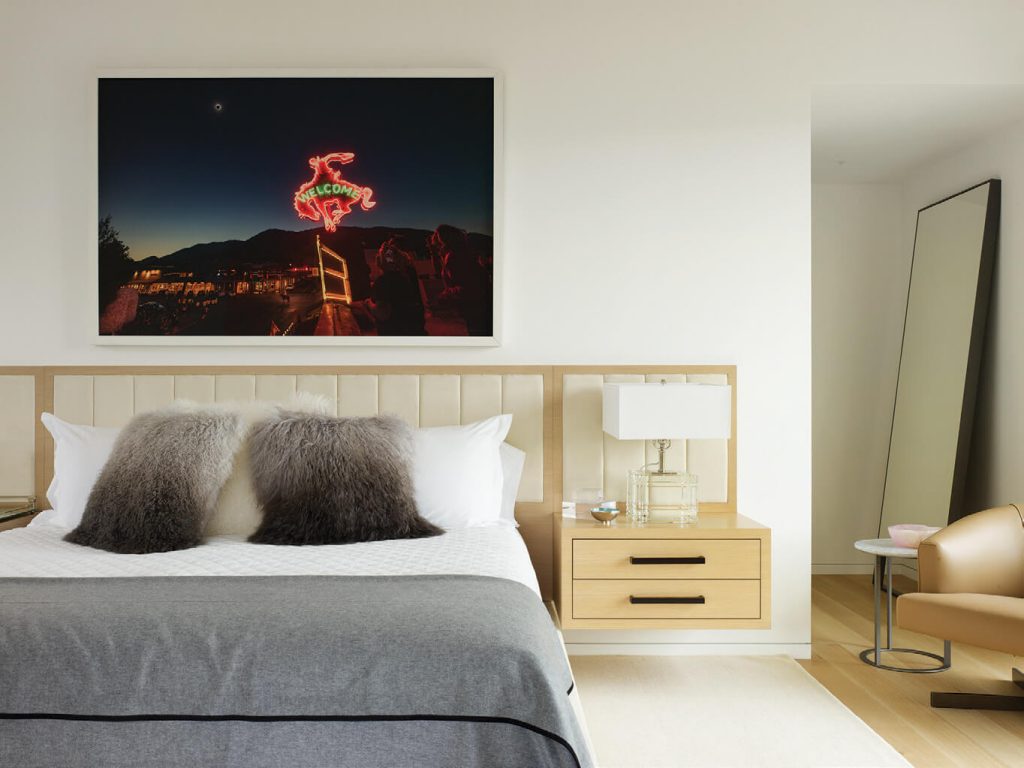 This bedroom, like the rest of the home, features a combination of contemporary comfort and luxury

Referring to the triptych, the homeowner says, “I wanted that same thing for the house: The more you experience it, the greater the level of detail that presents itself to you.” 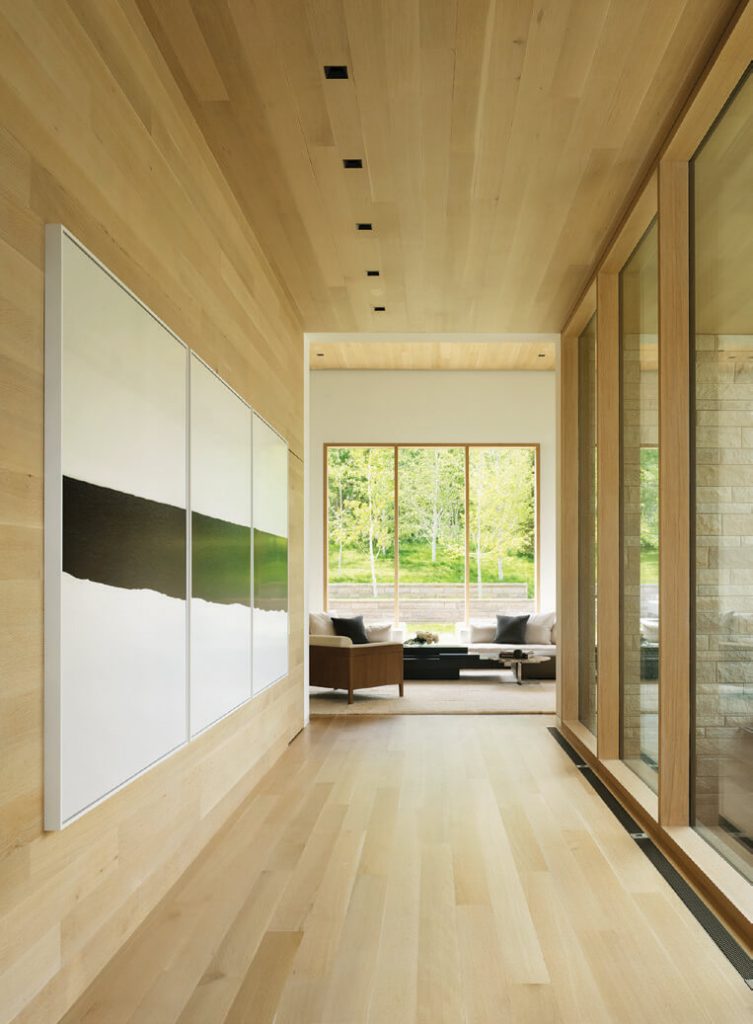 The home’s use limited materials, including wood, stone, glass, and steel, integrates all of the living spaces.