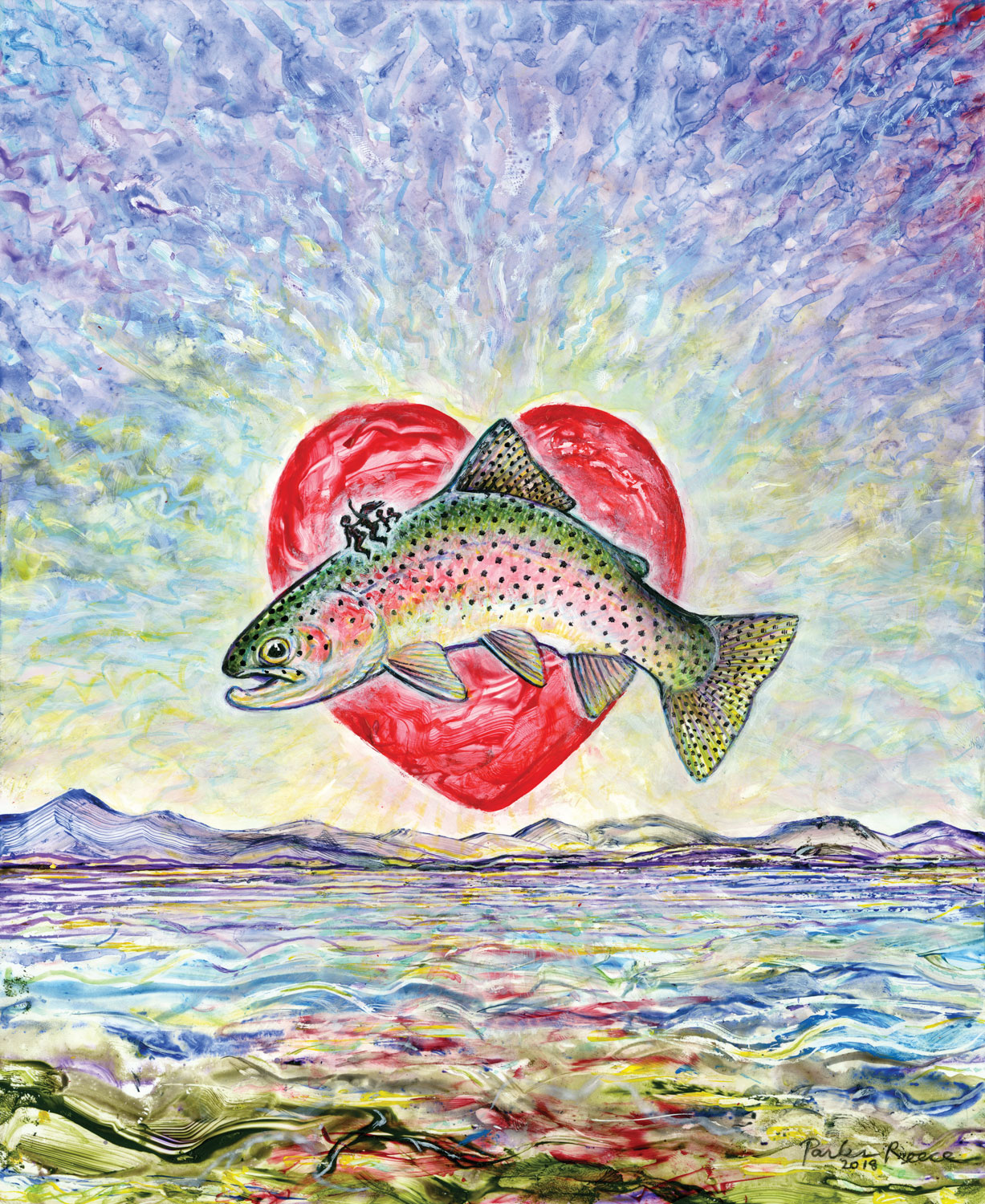 Our Common Tributary by Myers Reece

Addictions tend to strain relationships, but fishing has worked out pretty well for my family. I understand angling isn’t included as an addiction in medical literature, but to me it fits the criteria: the bulging eyes and sweaty palms when crossing bridges over rivers; the relentless indulgence that defies coherent rationale; the shirking of responsibilities; the burning, throbbing need to fish.

Perhaps because my wife, Kate, was raised by a father who suffers from the same ailment, she never complained when early dates consisted of sun-up to sun-down sessions on the water, nor when I left the hotel at 4:30 a.m. during our honeymoon to flail a hand-me-down Sage 9-weight in the Caribbean dawn. And she was as thrilled and shocked as I was when I returned to the room with photos of a 45-pound tarpon I’d hooked and landed from a nearby pier while a crowd of dumbfounded locals gawked.

Kate had fly fished before I met her and enjoyed it, which helped, but she was a reasonable person with a healthy list of other interests. At the time, I had very little experience with reasonable people, so perhaps I unconsciously approached her with the same anthropological curiosity that she used to observe me. At the time, as a young bachelor who owned more fly rods than pants, I was dipping my toes into the foreign waters of domesticity. On the other hand, she was a tolerant mental health therapist with a master’s degree in social work, who would diplomatically suggest that we spend a Sunday buying new clothes instead of fishing.

Yet, her zeal for fly fishing grew the more we did it together, and I even showed up to work one Monday in new duds. The early seeds of marital compromise were planted, nurtured by the most important factor of all: We simply wanted to spend time together. It just so happened that a lot of that time was on rivers.

Among the countless photos of us fishing, I am repeatedly drawn to one in particular: Kate is eight months pregnant, reeling in a native westslope cutthroat at the bottom of a steep embankment along the South Fork of the Flathead River. We spent more time figuring out a way down the bank than we did fishing, but all that mattered was that we made it together. It didn’t hurt that she also caught a few nice fish.

The beauty in her belly would soon emerge as the new centerpiece of our shared love. Fisher Parks Reece was born in 2016, a boy christened in tribute to the waters that bind us. Two years later, in September, we welcomed our second son, Gus Trontel Reece.

Gus is still not able to consistently clutch a rattle, so I probably shouldn’t stick a fishing rod in his tiny hands just yet. But Fisher should be of age next summer, based on the timeline of my own life, as I began fishing with my father when I was 3 years old. By the time I was 5, I would trudge by myself to the creek near our log home, armed with a spinning rod and a jar of freshly caught grasshoppers, to harvest a cutthroat or two. I would clean these fish, cook them in a toaster oven, and eat them for lunch. This often solitary pursuit was in fact rooted in family, and decades later, those roots remain intact.

There’s no guarantee, of course, that Fisher or Gus will like fishing. But in many ways they were born of it, and we will all forever be bound by it. They will one day look at the photo of their pregnant mother on the side of the river, fly rod in hand, and see the common tributary of our lives. 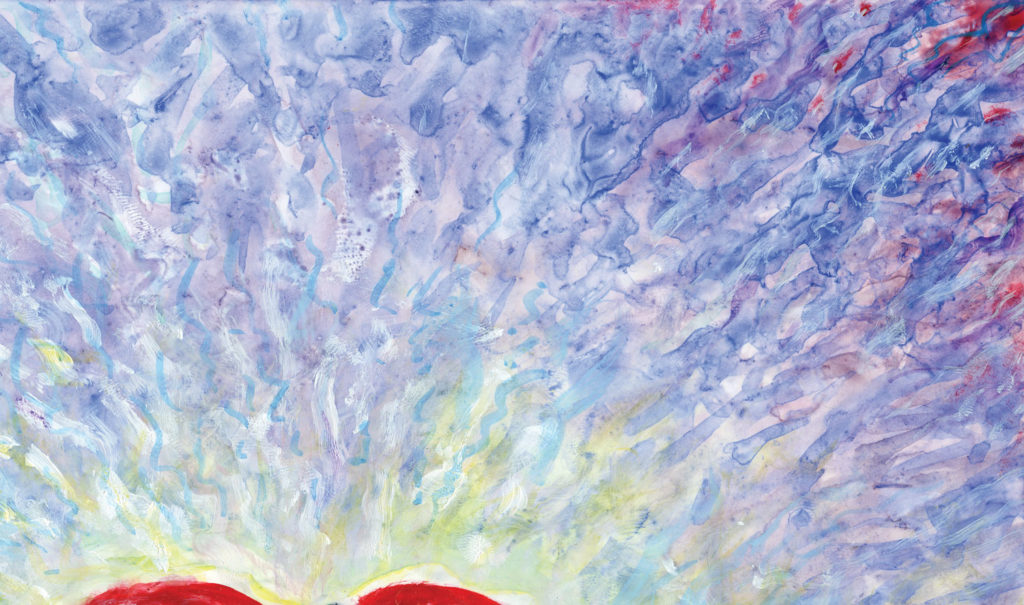 All In by Jennifer Olsson

Quiet. No, just quieter. I kept reaching as I sank. The summer sunlight narrowed to hope just above me. A few kicks, and I popped up. “Mom!” I screamed before going under again. I let go of the stick with the string I had pretended was a fishing pole. I had stepped off the sandy shoal into nothing. I was under. I couldn’t find bottom. I was all arms and legs grabbing at water, transparent cloth, nothing to hold me. If I just kept at it, I’d get back up and there would be more summer. Then I felt lifted, a strong tanned arm pulled me up.

“You’re OK, I gotcha. Just relax. Don’t kick me. I’ve gotcha.” My mother paced the beach and then waded in to receive me, wearing an oversized shift with large pockets. Afraid we’d tangle up and drown each other, she had called for help, and a college boy came to the rescue. We three sat shipwrecked on the sand. Salt water stung my eyes, and I coughed it out of my lungs. “What did I tell you? I told you not to wade out that far. What did I tell you?”

It’s June in Montana. The rivers are high. Above average runoff. I’m a pig-tailed teen in oversized waders, fly fishing with my father on some river. I don’t remember where. I think it was actually in Idaho. It doesn’t matter. I was strong. I could swim. I was careful, so put me in any river and I’d manage. Just a little farther and I could cast to that quiet water, that place where trout held along the seam line. One more step, and suddenly it boiled over me, only it wasn’t warm. Snap. I hit a snag. Legs bicycled. My father paced the shoreline, like my mother years before. He threw his fishing gear down to the left and right. “Hold on!” He waded out and snatched me up with his strong arms. It was a tough wade back; both of us struggled against the tumbling current. “Jesus Christ! You have to be more careful,” he said.

My mother and I never fished together. Breast cancer took her from my brother and I when we were teens, but she was comfortable in the outdoors and had let us roam as children. We were the generation of kids who played outside on our California suburban street with all the other kids until our mothers grew hoarse calling us in. It was my father who took us fly fishing to the Sierras and Montana. After our mother’s death, he soaked us in rivers with handfuls of Royal Wulffs as a way to start over. If there was a photo, you would have seen the three of us on the Madison near Three Dollar Bridge, all about knee deep, lined up within shouting distance, casting and casting, like we were ringing aquatic doorbells.

Something clicked for me in those days. Fishing gave me a place to rest an aching heart, and time to think about the beyond. It taught me that I could find myself again, and again. I have fished alone many times since, and I have found myself in that place between underwater and sky. And their voices play in my head every time the rocks roll, the hat goes, and the current shoves me over, while unzipped pockets release fly boxes, tippet spools, and dry float as offerings to the river. I promise you, I don’t want to end like Ophelia, but I understand her. Being consumed by something so powerful you forget where you are, even that you are; in that space half submerged, when in a wink, the line pulls taut, and you experience mystery solved, question answered, spirit world confirmed. I’ve always been in. All in.

With Relief by Adam McMahon

Time and distance. They separate us, and Dad waits. I take the Craig exit and roll slowly through town to find the campground, the familiar truck, and then park. We hug and trade beers. Forgoing small talk, we heed the pull of moving water, the reason we’re here. The Missouri swells in its carved passage, and the spring evening mottles the scrubby landscape. Still silent, we sip and let the river talk. A lone trout rises but we don’t talk fishing. Tonight, we meet; tomorrow we fish.

At the boat ramp in the morning, I’m in charge. Twenty years of fishing together has created a symbiosis, but our roles are not static. Like a gravel bed river, erosion in him coincides with aggradation in me. Once led; now leader.

I ready the boat while he slowly wades with unreliable balance. I rig the rods, still fluent in tippet, a sign language becoming extinct to his eyes. And I row first, an admission of strength but also debt; without him, I would not fish. Now set, we launch into the river, a tenuous moment when stable becomes fluid, ambiguous. We flow, rhyming oars and casts, anticipating the first fish.

In the past years, our own relationship had reached a seemingly steady state. Adult father and adult son, together a nexus which fishing seasons revolved. We knew our nexus was impermanent, but we lacked evidence for belief. Cancer provided evidence.

We advance downriver. An indicator telegraphs the drift of nymphs, and we seek synchronization through oar strokes and mends. Flies, river, trout; all coalesce for a take. Dad loses line tension and, with a jump, the trout flies free. I tell him to shrug it off. We’ll get the next one.

Cancer. Onomatopoeia, the pronunciation emulating an insidious nature. Cancer, yes, but not terminal, an affliction of the prostate and highly treatable. Regardless, undeniable evidence that our nexus was transient. A moment with implications. Fishing together was not forever.

Another river bend and Dad comes to attention. His rod contours, and this time the reel maintains line tension. I park the boat and wait, superstitiously avoiding the net until it’s truly needed. The fish surrenders, and only then do I scoop. A caught trout. I remove the fly from the jaw and reverse the net downstream. Free, the trout rests in aquarium clarity, and we appreciate its efficient silhouette. We celebrate before resuming, a landed fish evident in our relaxed postures.

Treatment took months. I lived away, and Mom communicated radiation options and schedules. Clinical circumstances made tangible by stories of uncertain nights in unfamiliar hospitals. Eventually a successful remission, but our nexus was tarnished, its ending no longer theoretical. A catalyst for unspoken words on love and life. Words only partially spoken. Perhaps a missed opportunity, or a realization: Mortality is ultimately personal. Regardless, we did what we always did. We went fishing.

In the afternoon, Dad takes the oars. Mayflies begin to hatch, their sailed wings tacking across the river. The urgency of cancer has faded, and every moment together is not poignant. But life is not urgent events, it is the interstices between. We still count fish but measure the time together stricter.

Rounding a shallow gravel bar, I intuit trout. I cast, and consciousness becomes hair tied to hook. A patch of substrate becomes trout which eats my fly. Hooked, the trout flushes into deep water, my animated rod and reel organic. Dad parks the boat in shallow water, and we exit for an easier landing. The fish tires and the net dips to encase a trout. A medium brown; Dad’s hand on my shoulder.

Another hour and the last river bend. Someday there will be a last trip, a last fish, a last cast. We know now, the fishing was not about the fish and take comfort that together we are elemental. Long after us, rivers and mountains will rise and fall. But with relief, water will flow. And in that current, creatures will swim, and on the bank, beings will stand and wonder how to catch the wet forms below.