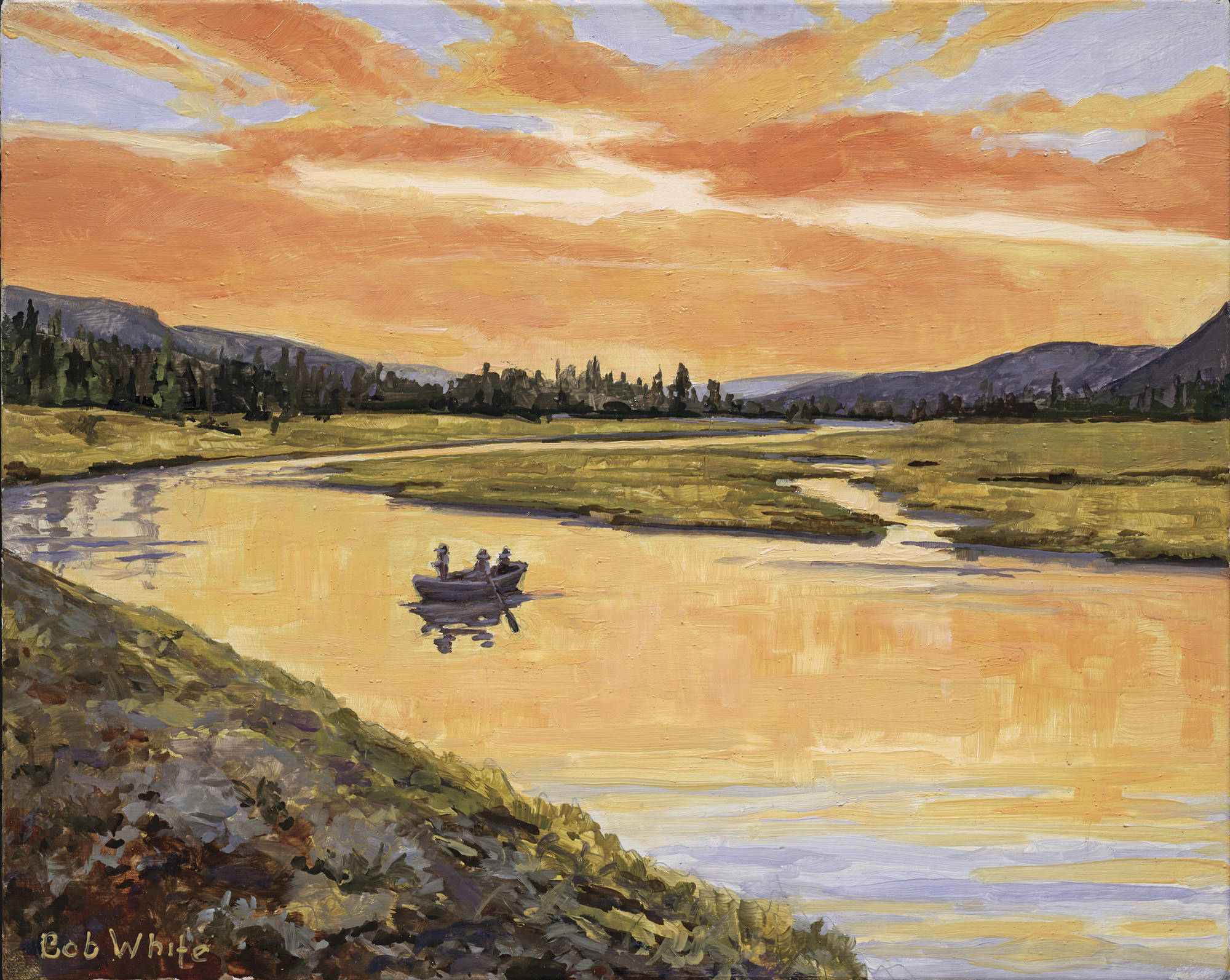 I’M HUNKERED IN THE BOTTOM OF THE DRIFTBOAT, covered with goose bumps, discouraged by the wind, eating a cookie. Elise has cinched down her cap and continues to cast from her seat in the bow. Our guide, Bill, noses the boat through one of those pretty upper Madison drifts that can turn you inside out with their absolute, fleeting beauty.

“Nobody home,” Elise sings in an Austrian-accented alto, reeling in as the current carries us downriver.

Near the beginning of World War II, Elise and her husband caught one of the last boats out of Europe to the United States. They started a family, settled in New Mexico and knotted one year to the next fishing until more than 50 had gone by. All of a sudden she is 86. Not so suddenly she is a widow. She ties new knots, pulls tighter, leans on rivers.

We are floating from Varney Bridge to Ennis as part of Elise’s annual Montana fishing pilgrimage. The wind blows itself out and the sun breaks through, scattering the morning’s rain clouds like sheep across the sky. Swallows dive back and forth over the river working a small mayfly hatch. Bill ties a Copper John on Elise’s line while she holds the rod in her thin, sun-spotted grandmother hands. I am much younger than Elise — decades younger — and even with that, I am not young. I take up my rod and imitate, tying a Copper John onto my own line. Elise casts slightly downstream, concentrating.

But my mind wanders and I am watching a kingfisher watch the water when she lets out an ecstatic cry. “Got one!”

The fish jumps and Elise hoots and I wait for the rod to sail out of those frail-looking hands, but she grips and reels and pulls the rod tip up, and laughs and plays with the energy at the end of her line. Here on this boat, now on this glass-green river, there is no such thing as arthritis or old age or loneliness. She brings the fish to the boat where Bill is ready with the net. It’s a nice brown. He unhooks it for her, but she is right there, reaching into the mesh to see. Her cap has gone slightly askew, hair puffing out from under like a soft white cloud.

“Bye-bye fishy!” she says cheerfully, as it fins away.

We settle back into our places in a quiet sweetened by the creak of oars and calls of red-winged blackbirds. An antelope with two fawns watches us pass. I hook a whitefish, Elise catches another brown under an eroded cutbank with dangling roots. She taught microbiology at the University of Albuquerque, and now occasionally lectures at senior centers on the biology of aging. Privately, she will tell you the Golden Age is full of shit.  Because it’s harder to fish. She can’t wade anymore, or even stand on the shore and cast because of her back. But, she shrugs, “I make the best of it. I am a floating fly fisherwoman now.” Because what’s the choice? She is still hungry to be outdoors, still curious about the natural world, still finding joy fishing in the ways available to her I think I better pay attention here. I’ve watched my share of seasons come and go; tracked time from pasqueflowers through Pale Morning Duns to huckleberries to hunter orange. But so many moments have slipped by unnoticed while my mind consumes itself with the last thing or the next thing or the current discontent. And of course it is only moments that remain between where I sit and where Elise does, hunched into her seat with her feet on the gunnel and her eyes on the water.

Bill pulls on an oar and the boat straightens through a little riffle. I peer over the side into the shallow water and study the cobbles lining the river bottom. The sun warms my head. The moment is perfect. And it will be perfect even when the wind kicks back up, because what I learn fishing with Elise is that perfection lies in the embrace, not in the thing.
The willows on the bank are bright green and even from here in the boat I can smell them. They smell like summer.