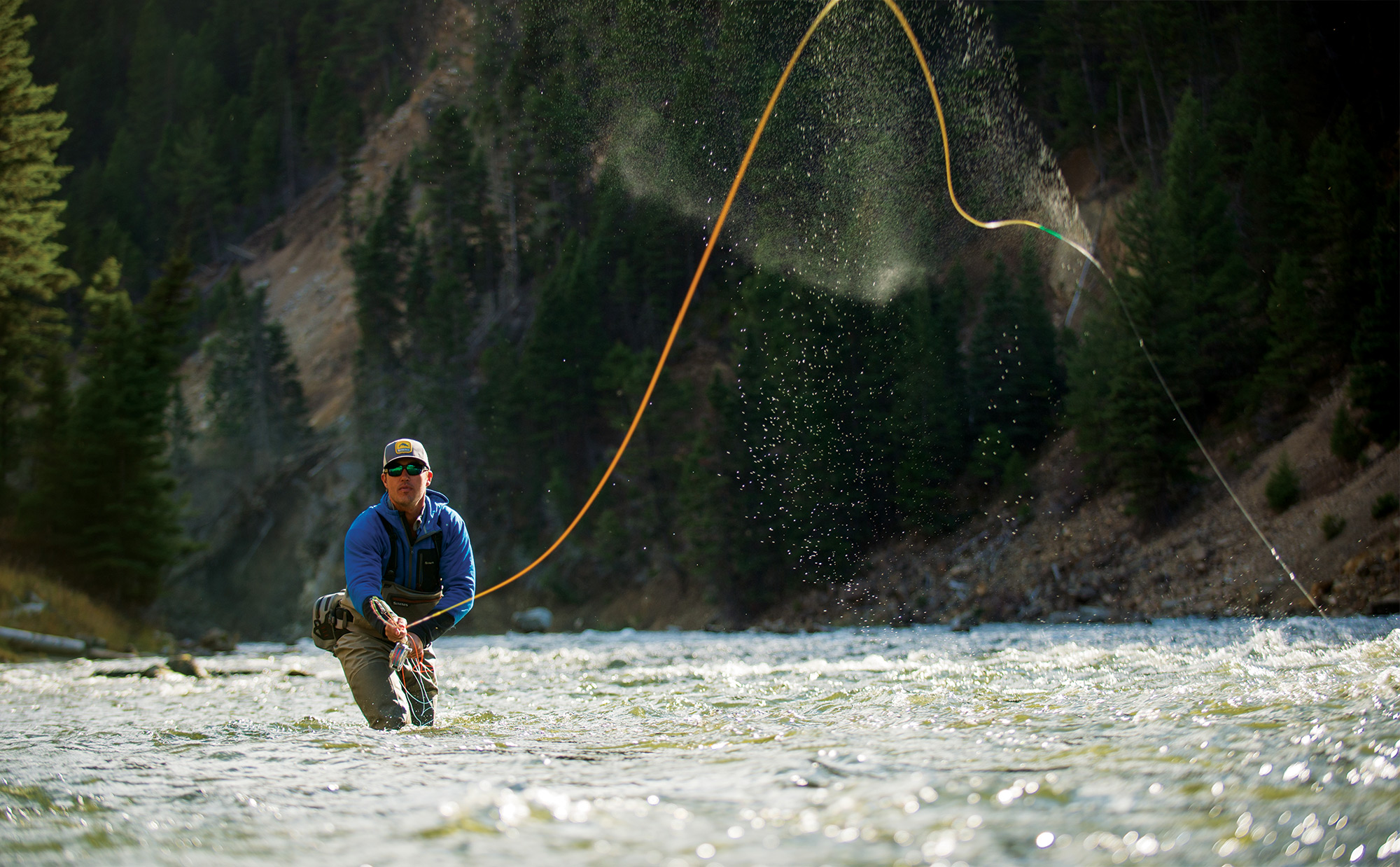 IF YOU’RE DEVOTED TO FLY FISHING — if you enjoy the sport not only as a pastime but also as an exercise in aesthetics, in splitting hairs and taking the high road, arguing the minutia of knots and mends, dry flies versus nymphs, fluoro versus mono, tungsten versus lead — fishing streamers offers a kind of reprieve, a straightforward, uncomplicated return to what brought you to fly fishing in the first place. Every cast is an appeal to the central mystery. Slinging a heavy wad of feathers and fur toward the river’s deepest holes, then imagining the possibilities. Should be a fish down there, should be a fish down there, should be …

Sculpins or muddlers or wooly buggers. Purple, red, or yellow. Beadheads or coneheads. Strip them back fast or take it slow, go for repetition or mix it up. Let them drift or swing them through, maybe bounce them along the bottom. When it comes to fishing streamers, there’s not much you can do wrong. Except not fish them at all.

Streamers will work most any time of the year, of course. But there’s something about the shorter days of fall, the colder water, that seems to suit them. Maybe it’s simply that the brown trout have found their extra gear, snapping at most anything that drifts past. Fishing streamers in the fall feels right, like aligning obvious puzzle pieces. You’ve put away the effete three-weight spring creek rod, the middle-of-the-road five-weight, in favor of that broom-handle of an eight-weight. Just having the rod in your hand raises your pulse.

A Montana fishing guide before he turned full time photographer, Brian Grossenbacher knows his way around fall streamer fishing — almost as well, maybe, as he knows his cameras: “Fall fishing is just amazing. We’re transitioning into that time when you can put away the hoppers. By the fall, fish have seen every single hopper imitation — and those things are getting ridiculous, how realistic they are. I almost feel sorry for the fish.” Talking streamers, his voice rises a notch. “Anticipating a tug from a really big fish — that first head shake, that confident swagger — that’s truly what gets me excited about fall streamers. That initial surge.”

Self-taught and self-directed, Grossenbacher’s career in fishing photography has been a model for what can be accomplished when ambition and an original vision meet an expert’s sensibility. “In 2005, my wife Jenny and I were asked to write a guidebook about fishing Montana. The photo budget was something like $1,800, which wasn’t enough. So we gambled. We took that budget and put it toward a camera and two lenses. It turned out that Jenny had little interest in photography, but I just frigging loved it. By the time the book was out, I guess I already had half a dozen magazine covers.”

The best photographers manage to communicate their passion for the subject even as they bring you along for the ride. Grossenbacher knows fly fishing, the culture of it, but more, he knows what it’s like to be on the river in the fall, casting big streamers for big fish. The simple pleasures of a take and a run. “It’s nice, too, the rhythms of floating down a big river, when you just make cast after cast. You fall into that rhythm of strip strip strip, pick it up, cast it back in. And then bang, the fish hits, and it’s on.”

He considers it for a moment, then adds, “There’s nothing else quite like it.” 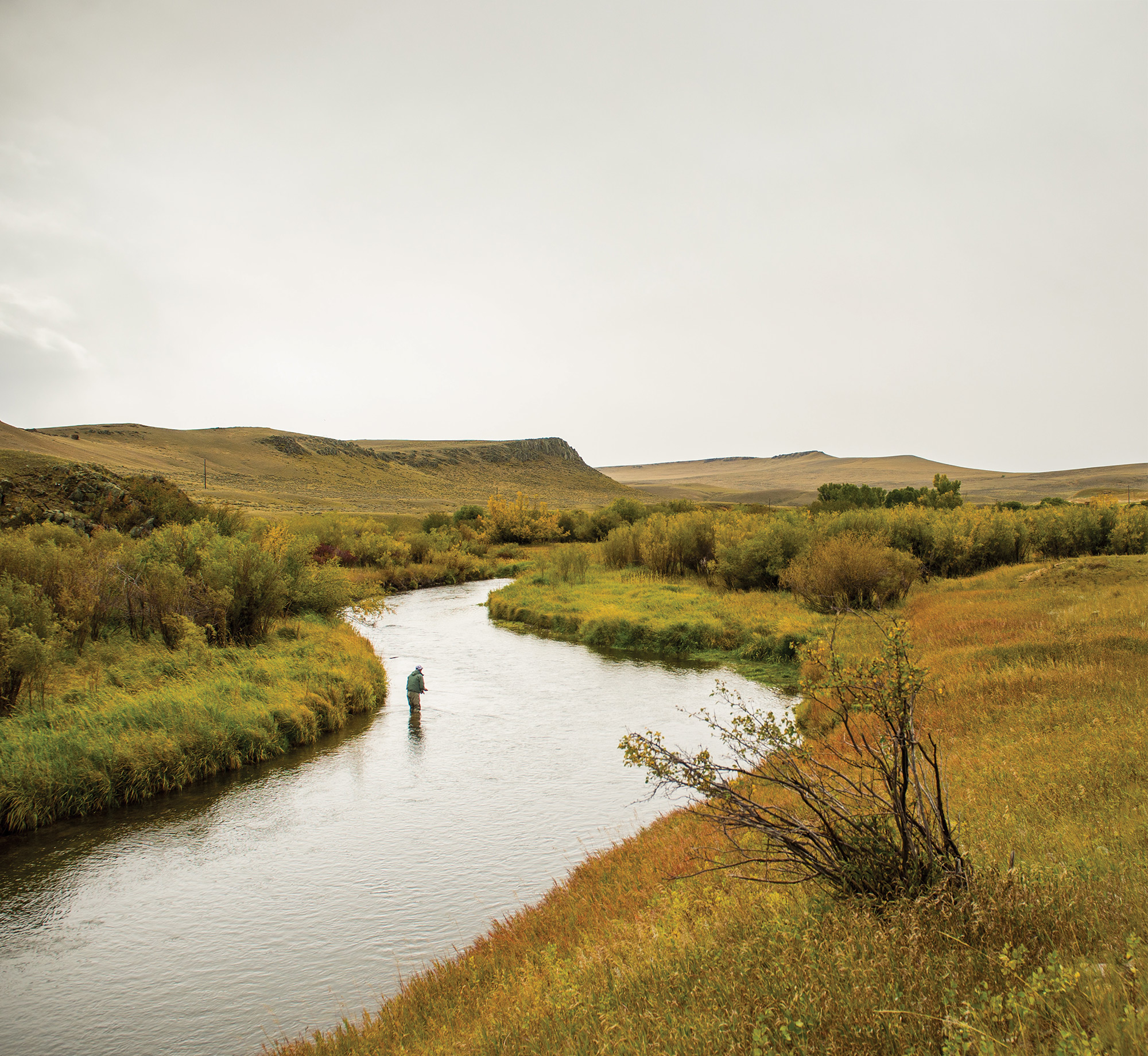 In the autumn months, after the upper Madison River loses some of the crowds, there are few better places to sling streamers. 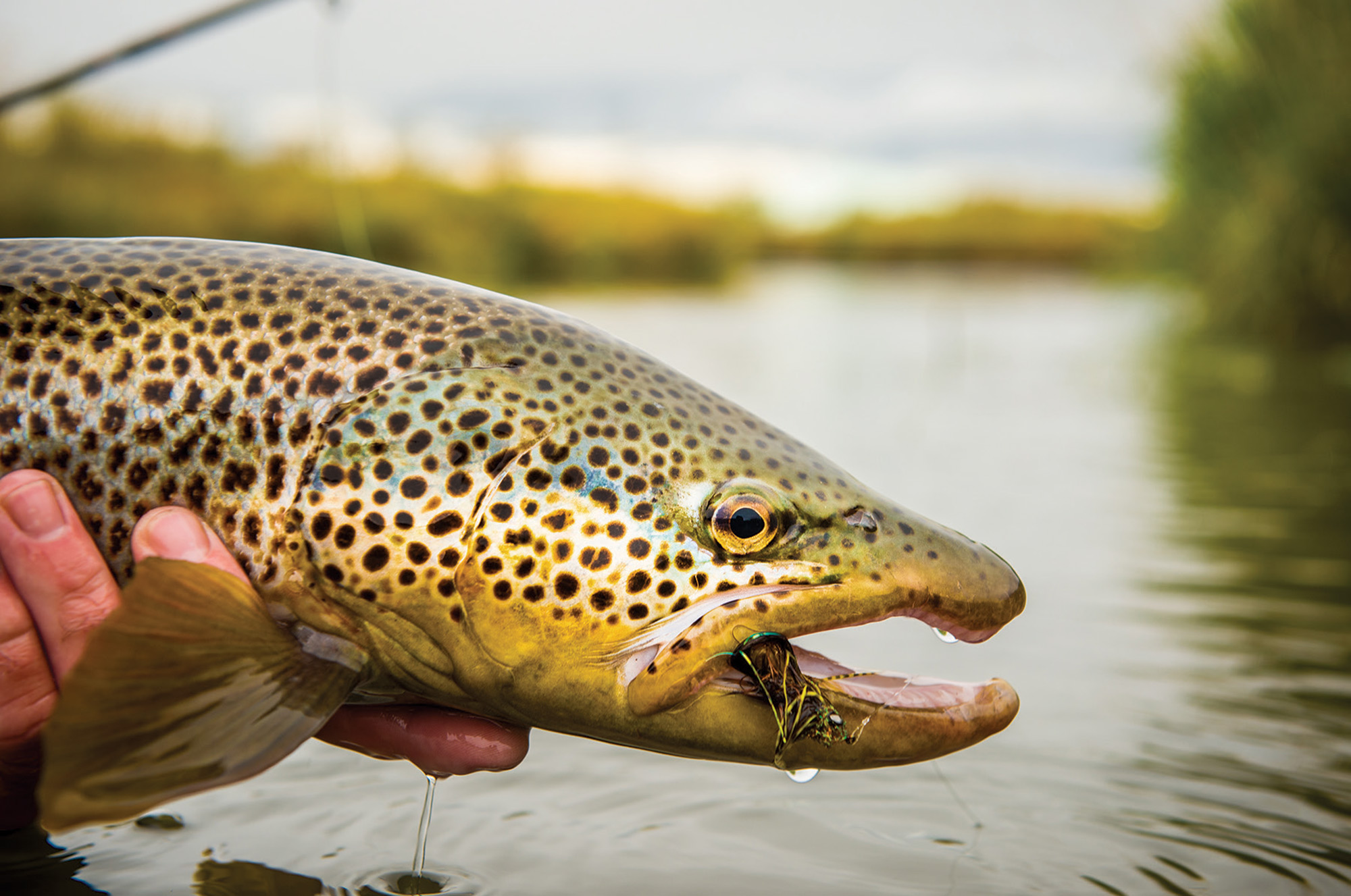 This monster was caught on a stream the size of a two-track gravel road. 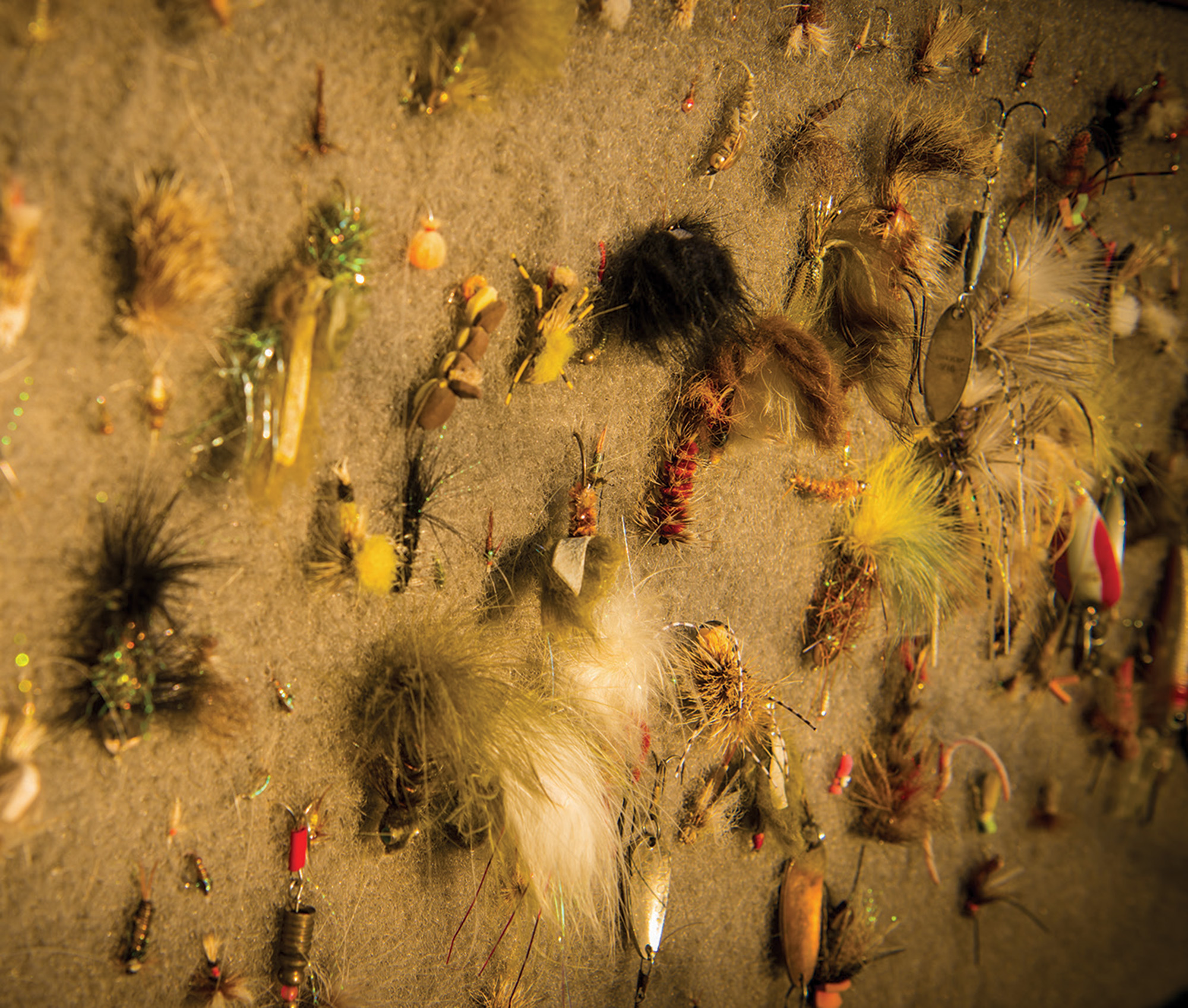 Some anglers carry their streamers around for months, mixed in conspicuously amid the nymphs and dries, just waiting for the right fall conditions. 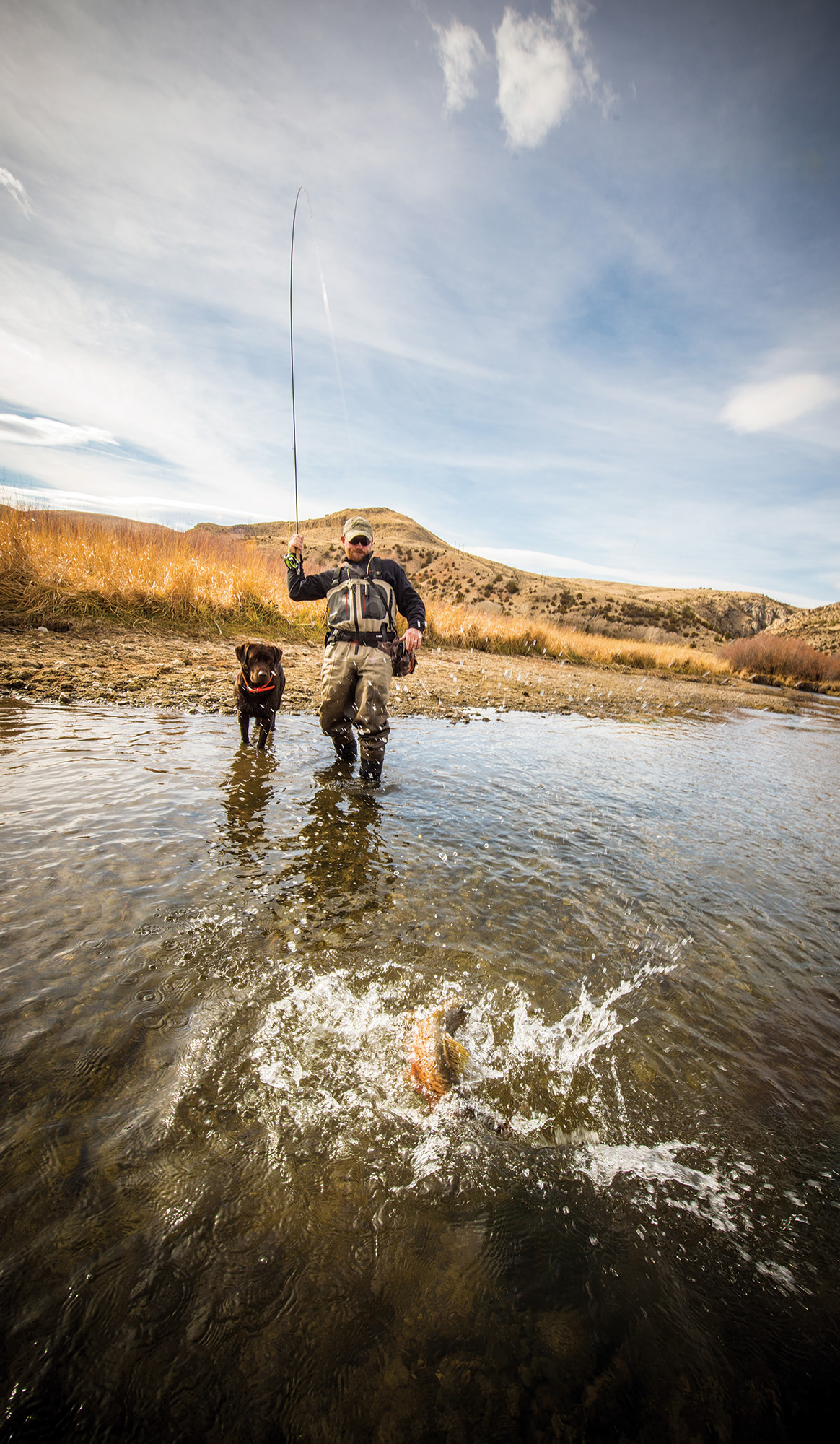 The Beaverhead River is famous as a fall brown trout fishery.