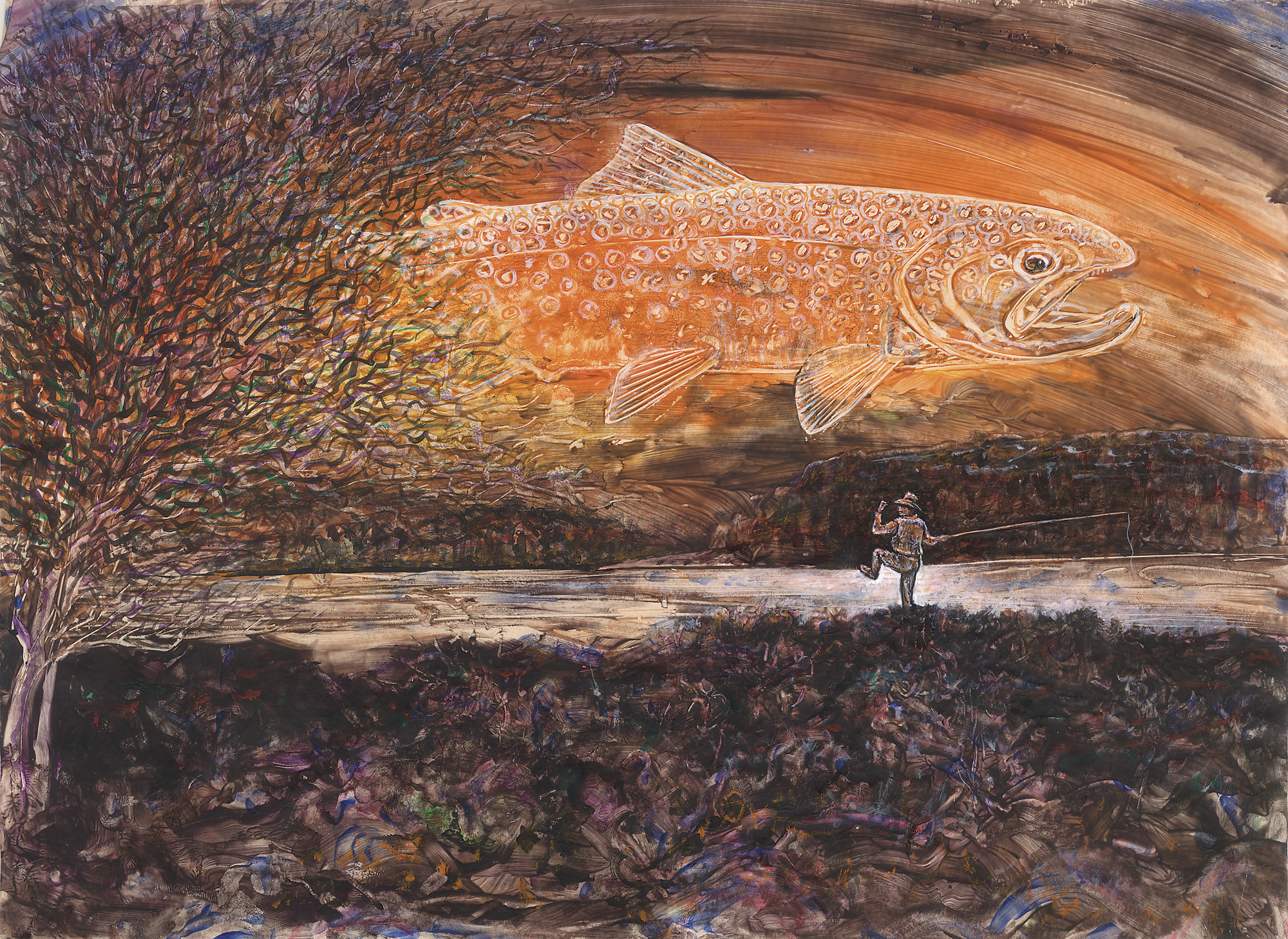 AGING INTO A LIFE SPENT FLY FISHING means coming to terms with disappointment. Your successes are a cinch, of course. Snapshots of brown trout held dripping 6 inches above the Missouri; the improbable tarpon and a grin caught half-shout. Here’s how you want to be judged by your peers. But, alas, how you judge yourself is determined by your failures: that secret portfolio of pulled hooks and tangled lines that stick with you like burrs. Given that the allure of fly fishing is largely found in the gradual accrual of skill, of striving toward the final 10 percent of knowledge and awareness and muscle memory that will allow you to outfish your buddies, the lost fish, insofar as they come to stand as silent judgment on an entire process, tend to be considerably more poignant than the bad boys you’ve actually brought to the boat.

Take an example: Here’s 25-year-old me, standing knee deep in the Shields River. It’s early November. The leaves are mostly off the cottonwoods and the browns are spawning, coming up from the Yellowstone. No predicting the size of fish that might be found in this little stream. A chill in the air, and the endless, quiet rustling of cold water. A good friend is fishing 100 yards upstream, his green line occasionally visible through the trees. More experienced, too-generous with patronizing advice, it’s a constant and not-very-admirable goal of mine to send this buddy back to the bench with minnows to my lunkers.

After a couple hours and a dozen or so 12-inchers brought up from the riffles, the day is almost done. I’ve got one more shot to make good, to redeem the day, the week, the month. And here, maybe, is my opportunity. Crouching in dry weeds, I’m staring across at a cutbank hole deep enough to hide a Buick. Another friend has described night fishing this same stretch with, get this, mice imitations, dropping them just off the bank to tease the 8 – to 10-pounders he knows are here. Fall browns in the Shields. Anything could happen.

I sling out my first cast, dropping an ugly rubber leg down into the hole. Presented well, the water gives up nothing. I follow the line with my rod, then retrieve. Roll cast back up to the shallow riffle and watch the line float closer to the bank, smooth and slow. Uninterrupted. It’s dusk, no breeze, the stars are aligned. How could I not catch a fish?

And indeed, on the fifth or sixth cast, the floating bow of green line shoots off at an unnatural angle. Quick, sharp, angry. I set the hook, lift my rod, and … maybe I’m hooked on the bottom. It’s that kind of fish. There’s a familiar three or four seconds of frustration before the line grudgingly starts to move. There’s not a great deal of water here, not much room to make a run. The fish contents itself with a slow pacing back and forth, exploring the deep hole. I’m here at his convenience.

I lift my rod tip high, and hang on. If I work the fish too hard, I’ll pull the hook. Not hard enough, I could be here until Sunday morning.

In the final, watery-orange light of day, I let the fish gum at my bugger for a good five minutes, following him north and south. There’s nothing like catching a big fish in a small stream, and this is a hog. How big? Three pounds on the low end. Five or six on the high.

Impatient, I start applying more pressure, trying to lift him to the surface. He rises close enough to nearly show me a flash of color, then he’s down again, sulking. Encouraged, I apply more pressure, lifting him up.

And then, and of course … my line. Goes slack. My stomach folds over itself and my mouth goes dry. I fight the urge to go John McEnroe with my rod, beating it against the brush. Here’s me, standing deflated in cold water, watching my line drift downstream in a straight line. The fish, my fish, lies congratulating itself at the bottom of the Shields. More than 3 pounds, surely. Five? Maybe more. I’ll never know.

And this, I think, is the final heartbreak of a fly-fishing gutter ball. It’s the not-knowing. It’s like seeing an elaborately-wrapped present show up under the tree, then having your house burgled. This happened 15 years ago, and while I would like to think that I’m a better fisherman now than I was then, and while I have caught fish that may be larger than the one I missed, I cannot say that those flaws (the impatience, the frustration) which traveled so efficiently down the rod to the water are not still with me. The successes of fly fishing — the photos thumbtacked to your cubical wall, the tarpon mounted in your den — represent, in some measure, the person you would like to be. But the failures are the you that you can’t escape.

DESPITE HIS IMPROBABLE NAME and his unruly dog, Sterling Fink was a good neighbor. You could count on him for the loan of a tool or advice on the proper spacing of a set of stairs.

It seemed he was always in the yard, puttering away. He could spend an entire summer painting his big white house on the west side of Livingston, Mont., next door to my mother’s house.

Mr. Fink always had time to visit as I entered or left Mom’s place, especially if I had a fishing rod. He liked to know where I had fished and how I had done.

One day found me especially disappointed. I’d lost a huge brown trout that afternoon, though I assured Mr. Fink that my knots had been impeccable, I’d kept my line taut and I’d given the fish all the room he needed to tucker himself.

I killed more fish in those days, and I showed him the two fat browns in my creel. But the trout that was on my mind was still in the river.

I’d been using a lead-headed, long feathered contraption meant to resemble a sculpin. It was difficult to cast and even harder to retrieve in the proper way, which required bouncing it along the bottom and trying to keep it free of the hazards down there.

I told Mr. Fink how tough this was, but assured him I had mastered the process, nudging my creel as proof. I told him where I had fished, the hours I put in, how that lost trout had run upstream and down. The fish had aimed for the beaver-chewed snags on the far bank, but I managed to steer him from that mess. He made my reel sing. He drenched me in sweat. He even knocked my hat in the river.

It wasn’t until I finally brought him to the bank that I got my first good look at this pugnacious beast, this brawler with golden flanks. The black spots on his back were the size of my thumbnails and his jaw jutted like the bumper of an old Buick. I do believe he snarled at me. Though his girth was not huge, his length was astonishing: 30 inches minimum. Maybe 34. As long as my arm. But this fish was no hog: he was an athlete and I had made him mine, almost.

With my left hand I reached for this carnivore, this king of the aquatic food chain, my finger aimed for his gill. The back of my hand grazed his skin.

And that’s when I fell on my ass.

He flexed once and was gone, leaving me with a sodden backside and my leader dancing in the wind.

Mr. Fink had remained mute through this epic, engrossed and sympathetic, I was certain. When I finally came up for air, he asked again where this catastrophe had happened.

He, too, had hooked into a similar monster there many years ago, and his excitement had rivaled mine. But when he hauled it to the bank he found it wasn’t a fish at all. He’d just dredged up an old kerosene lantern.

“And the odd part was,” he said. “That lantern was still lit.”

Disbelief and astonishment surely splayed across my face, and only then did Mr. Fink crack a smile.

“I’ll make you a deal,” he said. “If you’ll take a few inches off that fish, I’ll blow the light out in that lantern.”

Sterling Fink died many years ago.

But he left me that story.

I like it better than any fish I ever caught.

IT WAS ON A WILD WESTERN RIVER that rolled over worn rocks and boulders when I saw him out of the corner of my eye. Like last call at a pub, trout feed more brazenly on the surface just before the sun goes down, and he was making time in a back eddy.

He rose once, then twice. The best trout of my life have always been sly. I admired him as he sipped caddis pupae, careful not to expose himself. I could tell by the large ring he left he was a bad boy, the kind I could brag about on FaceBook. The kind with a tail so wide it would look like a baby whale had taken a header into my landing net.

He was no fool. I’d have to be wise. Make him think it was his idea. Keep a low profile, pretend to ignore him. This drives them crazy because when you finally strike, they have no idea what hit them.

I didn’t want to take any chances. I used a fresh 10-foot, 4X leader on an 8-foot 6-inch split-cane rod. I had to have every advantage, be my best, and look my best.

He had just fed and turned under when I made my play. Casting downstream I allowed the leader to pile up in nice loose loops. He wouldn’t get upset by any drag.

“What’s up,” he said coolly while taking down a natural.

Then I waited, not wanting to be too obvious. He fed twice, his big shoulders rounding as he pulled through the water. I felt dizzy. I wasn’t sure who was in control. He was teasing me to distraction. I cast again. My fly floated past his feeding lane. He didn’t come up. I knew he was hungry, but I would make him wait.

He rose again. He took my fly into his mouth. The heft of the mighty trout’s body pulled my desire behind it. The reel screamed, I screamed. Geese scattered. I could tell in the first 10 yards I had met the trout I had waited for all my life. He was magnificent. Coming out of the water he cartwheeled across the surface. “You’re feisty,” I complimented, hoping to flatter and get his attention while turning him against the current.

But then he played hard to get. He bucked and shook then torpedoed downstream. I thought it was temporary, he’d see things my way. But I was so wrong. He John Wayned me over rocks and river bed. He was rough but I tried to be stronger, taking his abuse while running clickity-clack in studded wading boots over slippery stones. Couldn’t he understand my dedication? I was giving him everything and he only took.

I knew it was over before it was over. I just didn’t want to admit it. Not enough line control. Maybe years ago when I was younger I could have kept up. Why do I torture myself with the likes of him? When will I ever learn?

I had already begun to quietly weep when the line went slack. 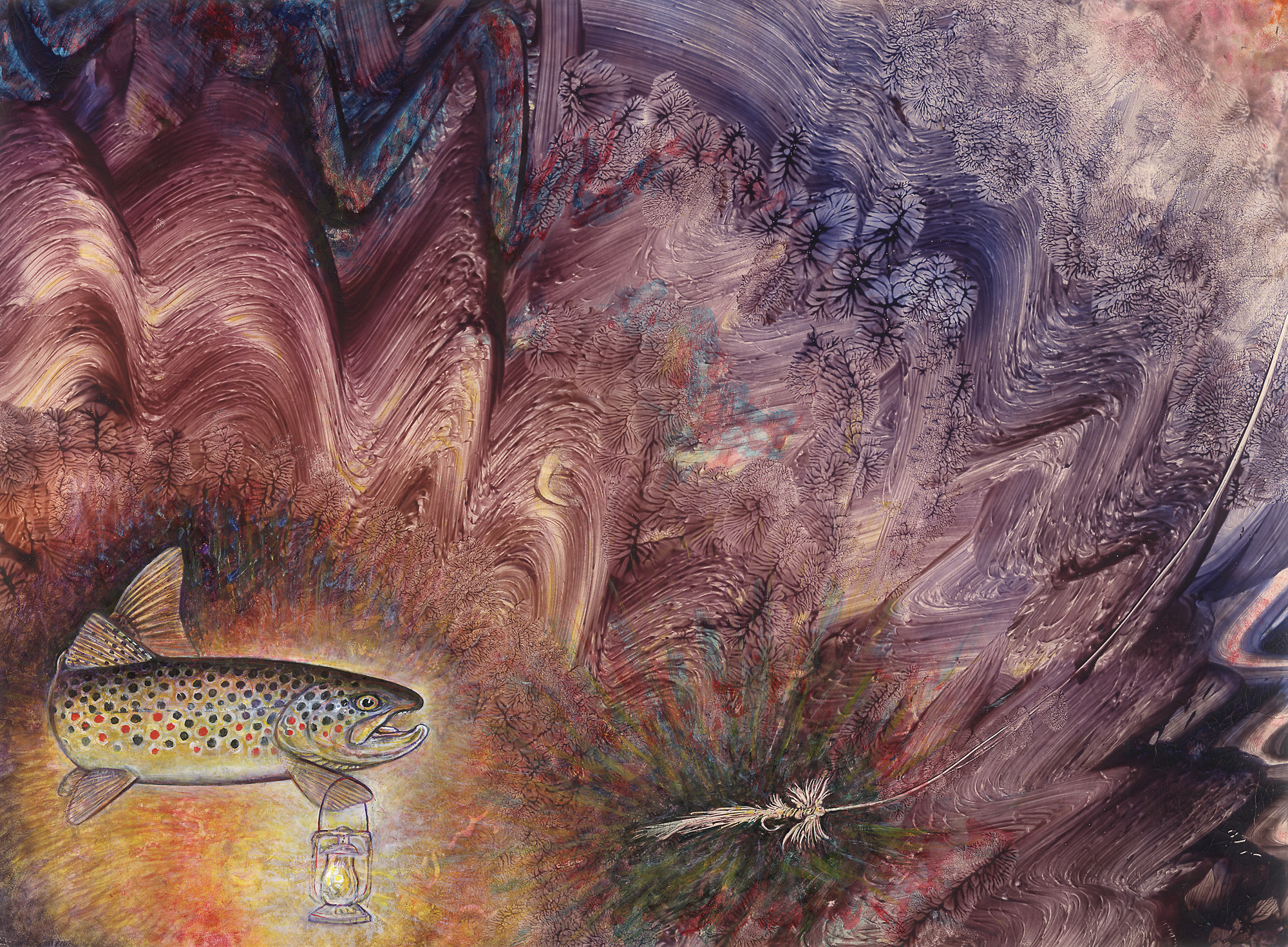 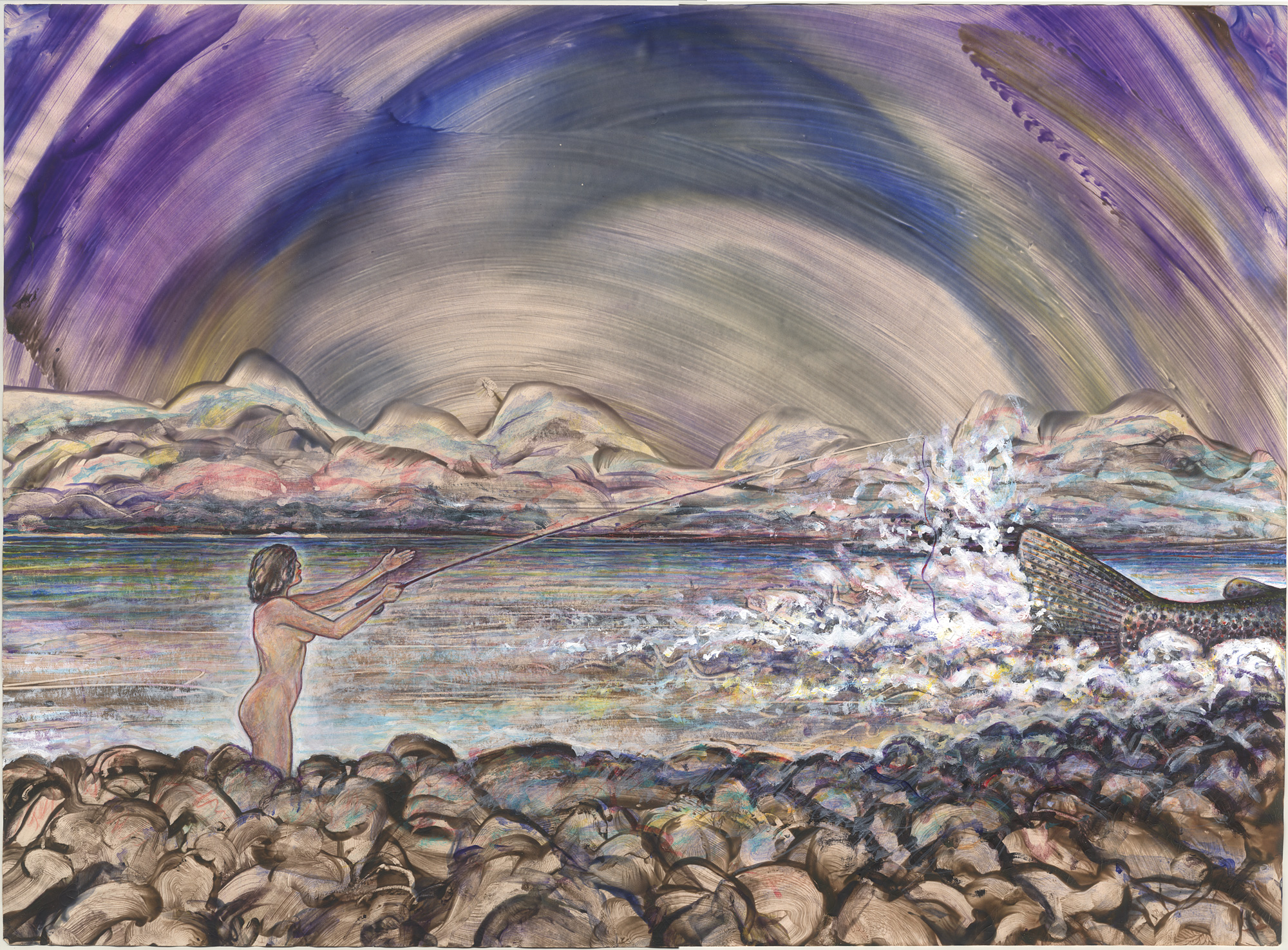