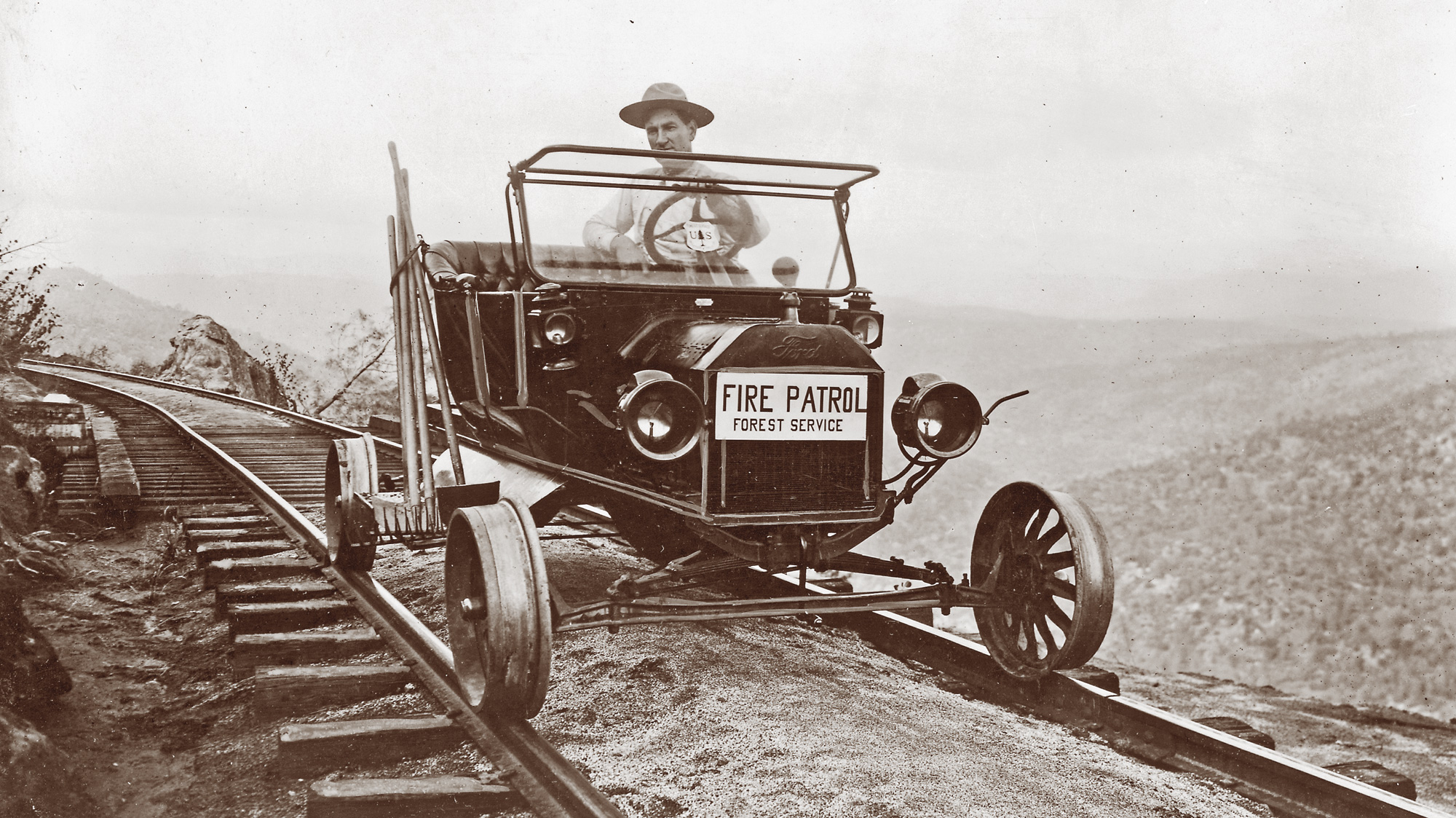 in Images of the West | Summer 2010 | Written by Melissa Mylchreest Posted at 22:25h 0 Comments
Share

ONE HUNDRED YEARS AGO, the events of one apocalyptic summer left an indelible mark on both the American landscape and the way we have fought wildfire ever since. Idaho and Montana felt the effects of this season keenly, where scenes heroic and horrifying played out against the backdrop of the Northern Rockies. As the current summer heats up, is 1910 just a memory, or a warning for the future?

The winter of 1909-1910 was, by all accounts, unremarkable. Forest rangers on the Lolo, Coeur d’Alene, and other newly designated national forests throughout the region reported deep snowpack in the mountains, well into spring. April brought showers, and residents expected a typical rainy spell followed by a long, pleasant summer. Forest Service employees looked forward to scouting timber, dousing small fires as they sprung up along railways, and fishing in their spare moments.

And then in May, something strange happened: The rain stopped.
The summer of 1910 saw not just the West but the entire northern tier of the country caught in a stranglehold of heat and drought. From the Great Woods of Maine to the Coast Range in Washington, spring was truncated by searing temperatures and an almost-eerie lack of rain. As trees turned to tinder, one forest ranger noted, “all nature seemed tense, unnatural, and ominous.”

MEANWHILE, WASHINGTON D.C. heated up as well. Tempers flared as foresters, politicians, and conservationists vied for control of the country’s public lands, and in particular, how best to address fire. While settlers still utilized fire to clear forests and fields — even the railroad used this technique at times — these burns often escaped, charring large swaths of land. Conservationists proclaimed loudly that such wanton use of fire had no place in America. Politicos felt that while burning had been a necessary evil during frontier settlement, unchecked flames were now “uncivilized.” To timbermen and economists alike, fire was the ultimate enemy, laying waste to a valuable resource (even though the worst conflagrations often followed loggers’ footsteps).

In 1905, Gifford Pinchot took control of the nation’s forest reserves as chief of the newly formed Forest Service. Scorned as a directionless agency by both the public and government, the nascent Forest Service needed a purpose. In Pinchot, the Forest Service found a champion.

According to Dr. Ron Wakimoto, current professor of forest fire science at University of Montana, Pinchot was the model of Progressive-era conservation. Wakimoto says that, like Roosevelt and other contemporaries, Pinchot staunchly believed “man had to act to prevent the destruction of nature by man.” Immediately, he set about eliminating fire in the nation’s forests. As Pinchot’s crusade became inextricably linked with the fate of the agency, young rangers took up the banner of eradication. Fire suppression became political, positioned within the foundation of a federal agency.

Fire patrols successfully conquered flames each passing summer, and Pinchot congratulated himself. The Forest Service and its mission, however, would be brutally tested. Early in 1910, Pinchot was fired for insubordination, and the reins of the service turned over to Henry Graves, Dean of the Yale School of Forestry. Though educated in fire ecology, Graves nonetheless embraced suppression and in early August published a treatise stressing the paramount importance of eliminating fire from the nation’s forests.

THROUGHOUT JUNE, while flames consumed entire towns in Wisconsin and Minnesota, lookouts in the West scanned the horizon for the inevitable wisps of smoke. In July, they came. Ignited by railroads, careless citizens, and a series of rainless lightning storms, blazes smoldered unnoticed for days and then suddenly blossomed, churning unchecked through miles of forest. The fight was on.

Rangers split their time between two equally daunting tasks; battling on the fire lines, and scouring towns for able-bodied men. They coerced, cajoled, and threatened, staffing crews with a motley assortment of drunks and drifters, out-of-work railway men, thrill-seekers, and anyone willing — or sometimes unwilling —  to work for the good pay and food promised. A typical crew included 12 to 20 men, speaking any number of languages and possessing all levels of skill and dedication; often the most unpromising souls proved to be diligent, level-headed heroes, while others deserted at the first discomfort.

The skies glowed a ghastly yellow as residents packed up their belongings, preparing to board evacuation trains at a moment’s notice. Companies of U.S. Army infantry arrived to supplement the ragged crews. Bear, elk and mountain lions prowled through towns in search of safety, disoriented by the darkness that descended in mid-afternoon. Streams ran white with dead fish, bellies up, the water turned to a lethal alkaline solution from filtering through so much ash.

Men worked feverishly to contain the flames, setting backfires and digging line and victory seemed possible. But one old-timer cautioned a forest ranger that they’d be all right … as long as they didn’t get a “Palouser.”

And what had been a tough fire season suddenly became the most infamous fire season in American history.

Late on August 20th, men stumbled towards dinner and bedrolls in camps throughout the mountains, exhausted after fighting against a strengthening wind. A few hours later, the hot, dry gale from the southwest, the “Palouser,” slammed full-force into the Northern Rockies.

Over the course of just two days, 3 million acres of forest burned and at least 85 people died. Fires picked up and ran at unbelievable speeds; those on the Clearwater National Forest in Idaho merged and in 48 hours raced more than 40 miles through the Bitterroot Range into Montana. The towns of Wallace, Saltese, Haugan and DeBorgia burned. Terrified residents fled on a last-minute emergency train to Missoula, its whistle screaming as flames licked the boxcars.

Driven by hurricane-force winds, the fires were utterly unstoppable. Smoke columns blazed as the superheated gas within them ignited, rocketing thousands of feet skyward. Otherworldly tornadoes of flame shrieked through the forests, and the wind lofted burning brands as big as a man’s hand far ahead of the main fronts, igniting spot fires up to six miles away. A steady downpour of embers and ash fell in a nightmarish mockery of rain.

The gale toppled millions of trees, wrenching entire stands of forest from the ground and stacking them like kindling before the racing walls of flame. Witnesses recall “the screeching, furious howl” of the fire, and that the din of crashing timber was so tremendous, men yelling side-by-side could barely hear one another. No sun shone. With horror, some remembered those smoke-blackened days as “one long horrible night.”

Throughout the mountains, firefighters struggled to survive. Trapped on all sides, blinded and choking, they had only desperate options. Some holed up in mine shafts and homestead root cellars. Others threw themselves facedown in shallow creek beds and huddled beneath wet blankets, feeling their skin bubble and singe as the flames roared over. With only minutes to spare, rangers gathered their men in the safest spaces available. A few held their crews at gunpoint, knowing that if panicked men ran, they would be overtaken by the flaming front, miles wide and racing faster than any man could sprint.

The lucky suffered burned faces and hands, smoke-damaged lungs and eyes. In places like Deadman Gulch and Storm Creek, the unlucky died by the dozens, fallen side by side and burned beyond recognition.

And then, on the night of August 22nd, it rained.

The firestorm was over. But the scars remained, etched deep into the skin of those who fought, the landscape of the Northern Rockies, the memory of a nation, and America’s firefighting policies.

AFTER THE SUMMER OF 1910, the country agreed: Fire threatened life and livelihood, and its presence was unacceptable. If the smoldering aftermath left any doubt, the legacy of those who died fighting did not. The Forest Service, battered and bruised, emerged triumphant; ironically, their near-defeat emphatically affirmed the need for their existence.

A century later, the nation’s forests still feel the long reach of 1910. Since then, the country has spent billions of dollars and countless hours battling fire. Foresters now understand, however, that fire plays a vital role in the health of a landscape, and depriving forests of fire for too long renders them vulnerable. Fine fuels accumulate in the absence of fire, resulting, eventually, in hotter, deadlier fires.

But policies saw little change until the infamous fires of 1988, which bore an eerie resemblance to those of 1910; drought led to millions of burned acres throughout the region, and “Black Saturday,” the worst day, fell again on August 20th. When asked about the likelihood of a repeat of the 1910 fires, Wakimoto says, “The events of 1910 are more likely to happen now than in any time since 1988.” With more people living in the wildland-urban interface, deaths and costs could be far higher.

And while modern firefighting employs techniques unheard of in 1910, the underlying threat remains unchanged. Wakimoto reminds, “No technology, technique, or communication can stop fire in such winds.” Just as in 1910, “When the wind blows, we just get out of the way.”

Forest service worker in fire patrol vehicle. The railroad was both a boon and a hindrance to firefighters: Trains enabled them to move through the region quickly, distributing men and supplies, but trains also threw sparks onto the dry landscape, igniting new fires. Photo Library of Congress, Carpentar Collection 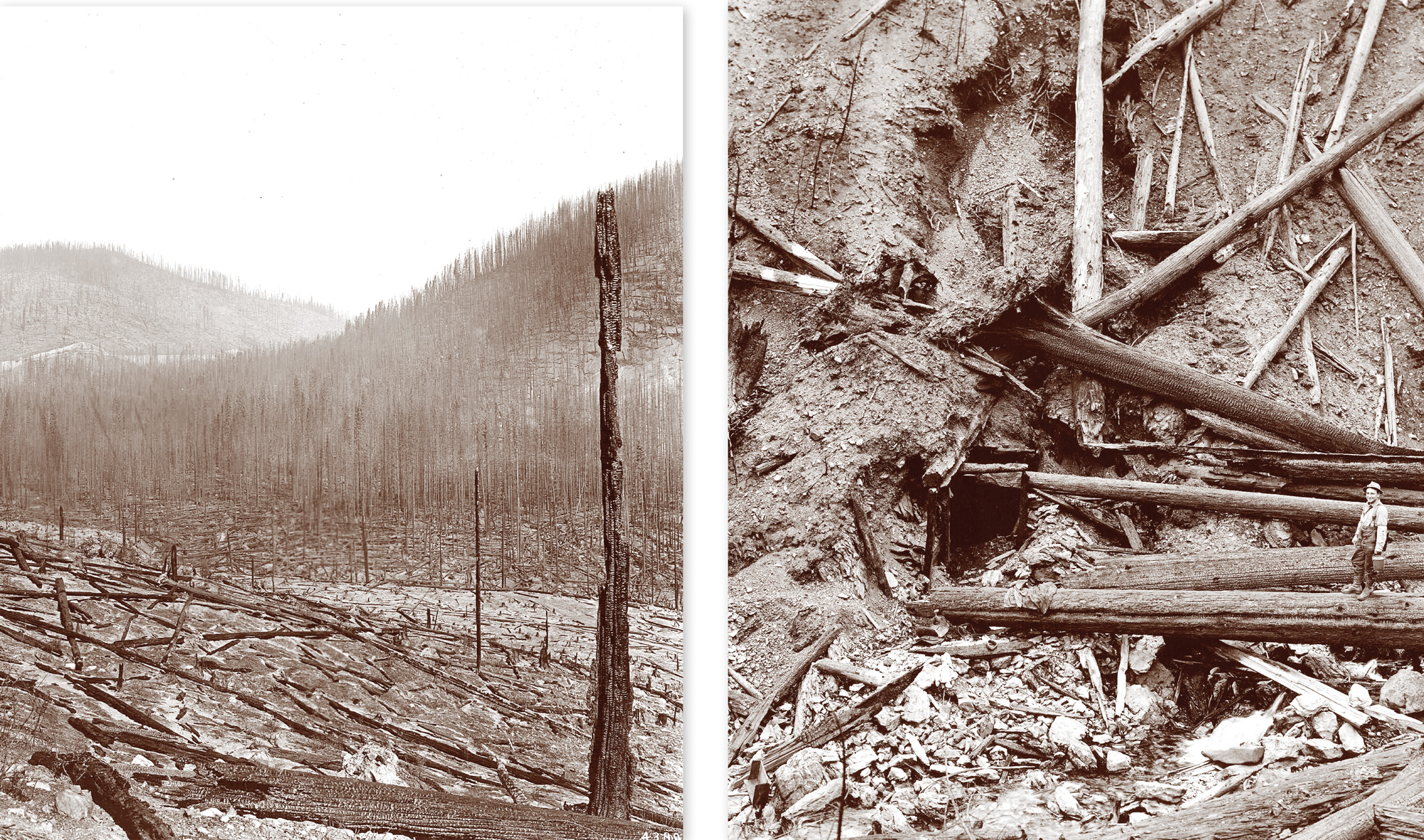 Left: The “Big Burn” of 1910. View from the Northern Pacific Railroad grade after the fires raced through Lolo National Forest. Right: Mouth of the mine in which Ranger Ed Pulaski held 50 men as the fire burned over, this saving their lives. Photos Courte 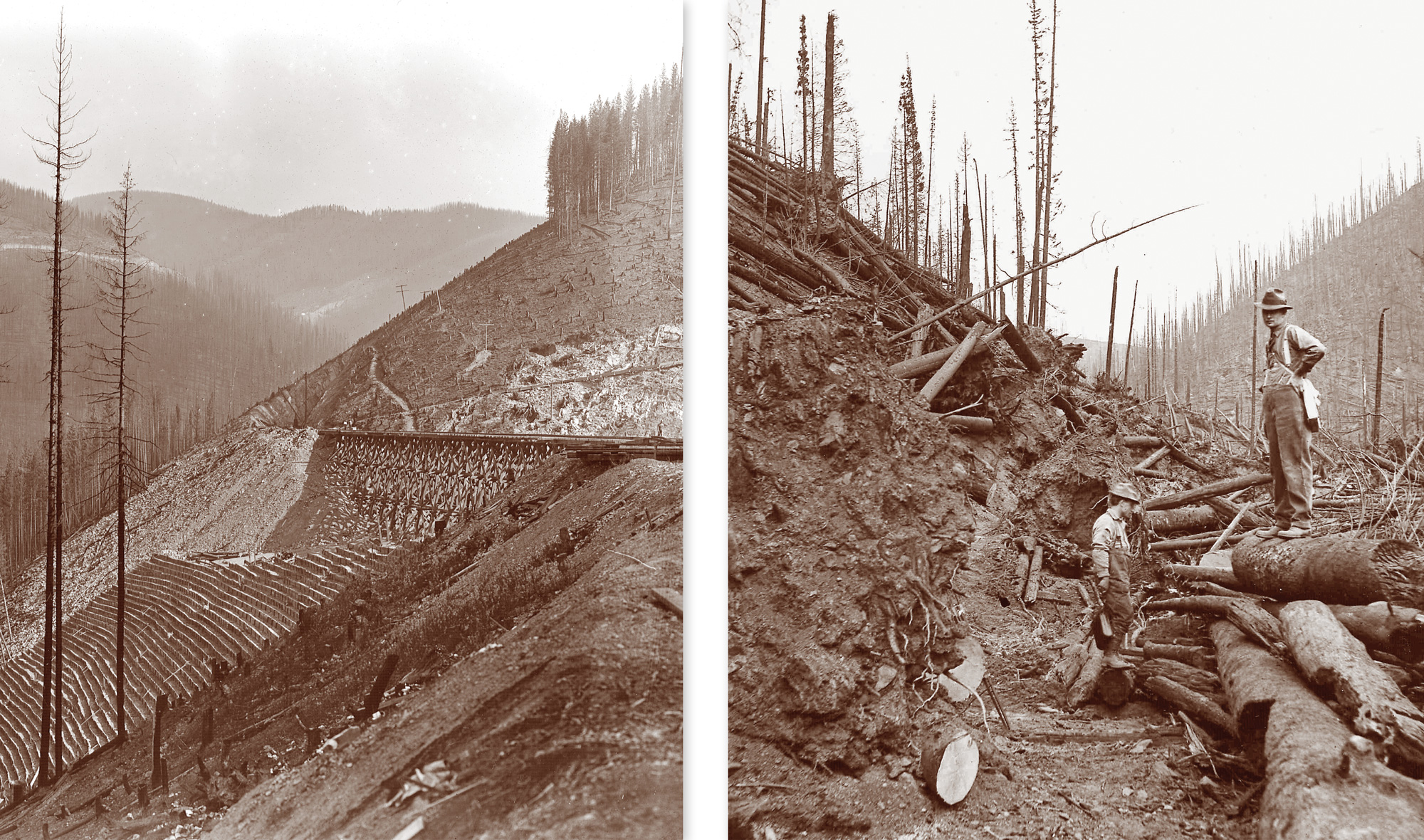 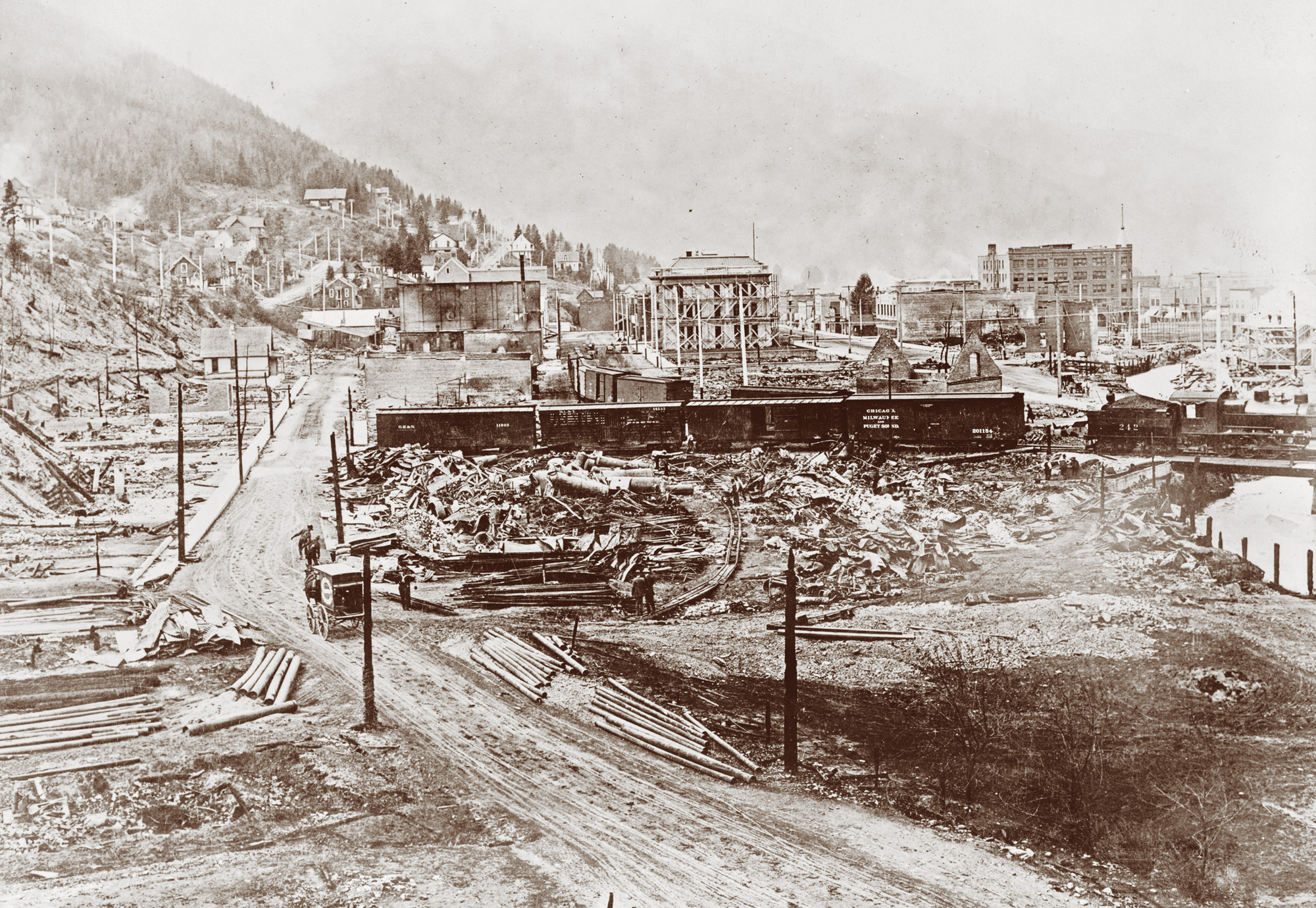