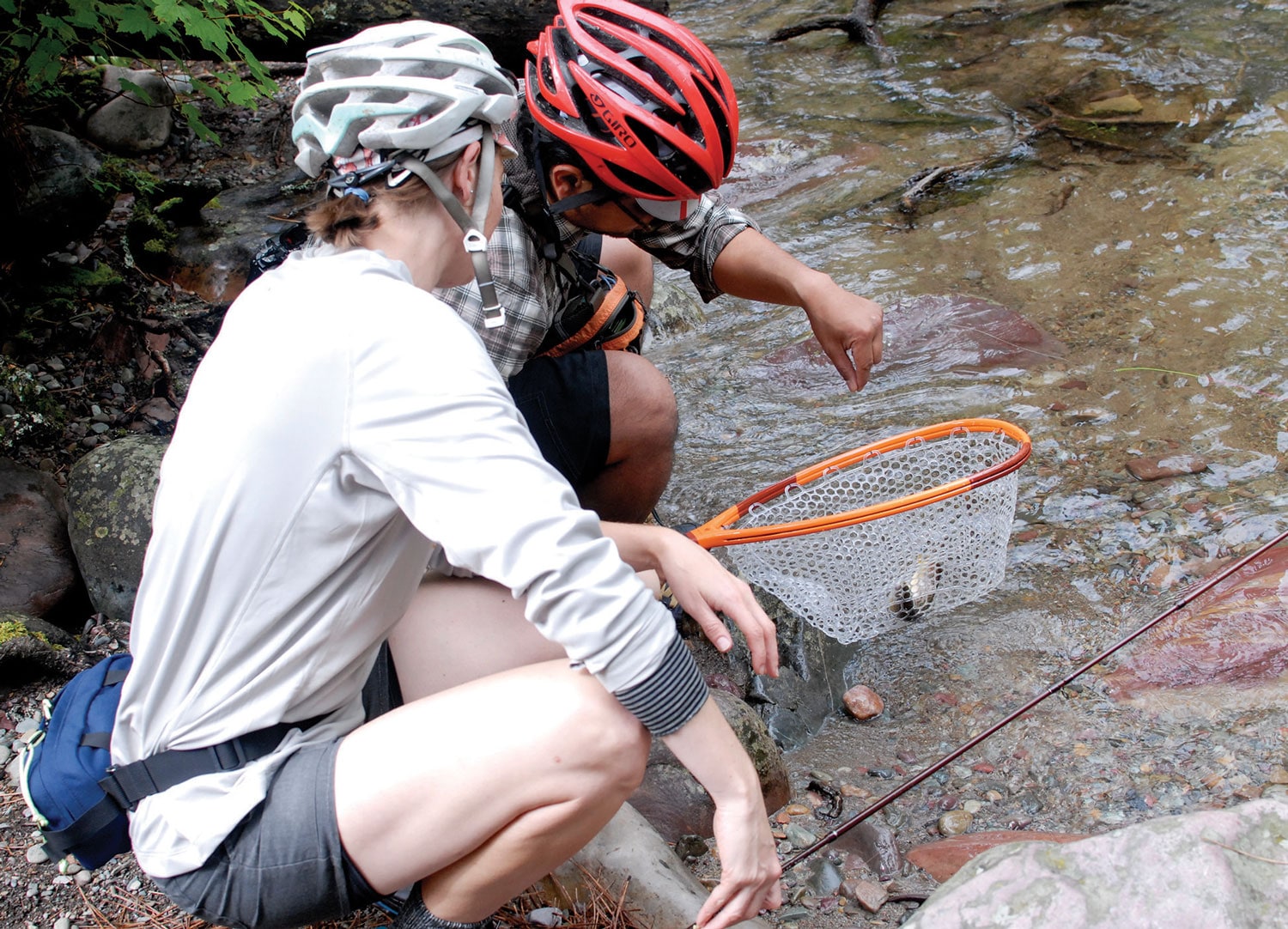 One could consider Russ Roca and Laura crawford gurus of simple living and the Zen of bike packing. Living in a tiny three-room apartment in Missoula, Montana, they own one car and cell phone between them, and get around primarily by bike. “They are the embodiment of down-scaling, stripping things away that are unnecessary,” says Ginny Sullivan, Crawford’s co-worker and director of travel initiatives for the Adventure Cycling Association. 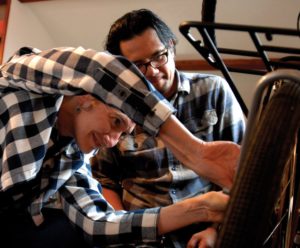 The couple teaches people how to combine the two sports and advocate for bicycle tourism, fly fishing, and simple living through Crawford’s work with the Adventure Cycling Association and through their website, The Path Less Pedaled.

The couple, who hail from the West Coast (Roca from California and Crawford from Oregon), met in their “chatty” Long Beach, California, neighborhoodin 2002. Crawford was working for Heifer International and commuted to work on an old mountain bike. When Roca’s truck died in 2000, the freelance photographer decided not to replace it. He got around initially on inline skates, but soon switched to a bicycle, loading his photographic gear on a trailer. He hasn’t driven a motor vehicle since. (That’s 19 years, if you do the math).

The pair started taking short bike-packing trips around 2007 — bringing only the essentials and heading out on dusty backroads. Old-school road bikers and cycle tourists tend to use the terms “bike packing” and “bike touring” interchangeably, but, Roca notes, there is a difference. “Bike touring is to bike packing what road running is to trail running,” he says. In other words, bike packing can take you to places where paved roads don’t go.

A couple of years into their adventures, the couple wondered: “What if we didn’t come back home?” Crawford says. And in 2009, they didn’t. They purged their possessions and spent the next three years traveling through the U.S. and New Zealand, logging around 15,000 pedal-powered miles. 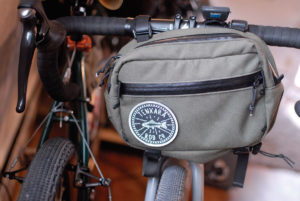 It was around that time that they started their website, The Path Less Pedaled. It began as a travel journal, but Roca and Crawford were also pondering — and soon blogging about — the benefits of bicycle travel. “Our goal is to find people, people like us or people we want to be like, who have chosen a different path in life,” Roca says in an early video for the website.

Those efforts grew into a consulting business that helps communities develop amenities for “cyclotourists,” and touts the benefits of bicycle touring. Despite his reticent nature, Roca often speaks at tourism conferences, and gear manufacturers have interviewed him for podcasts and other media. He also produces informational videos about biking, fishing, adventures, and gear for The Path Less Pedaled’s YouTube channel. As the nonprofit Adventure Cycling Association’s U.S. bicycle route coordinator, Crawford also works in bicycle-tourism advocacy. 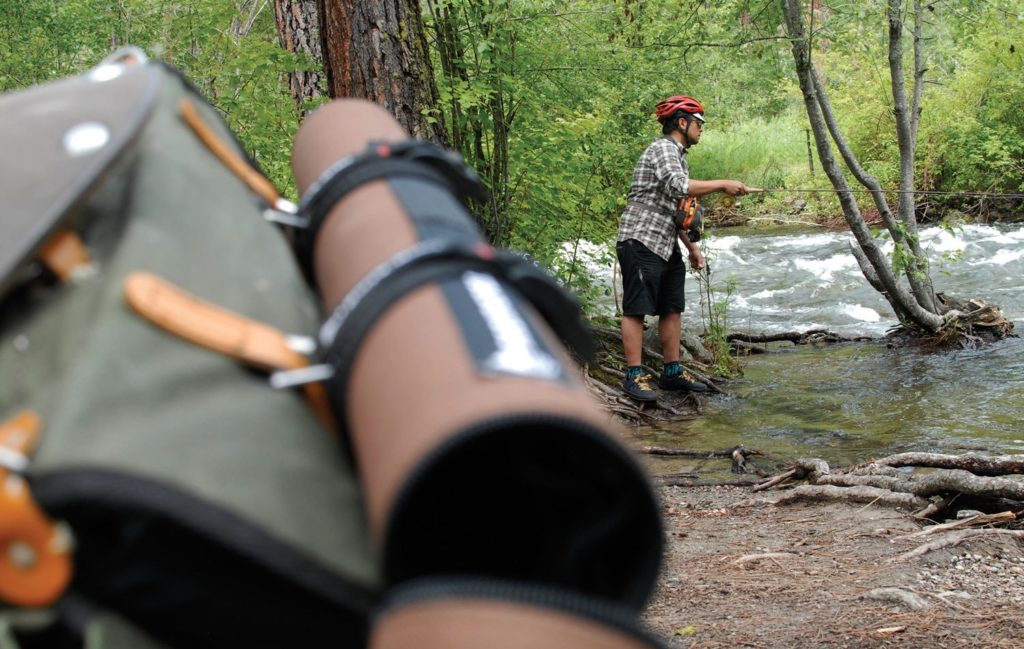 Roca casts into Rattlesnake Creek after a short bike ride from the couple’s home in Missoula, Montana.

One of the two tiny bedrooms in the couple’s apartment is crammed with nearly a dozen bicycles, while several others lean against walls or the counter in the small main room, which also serves as Roca’s office. Some of the bikes are temporary, as the two have gained a reputation in the industry and are often sent bikes and gear to test and review. But then, another sport caught Roca’s interest as well: fly fishing. Perhaps, he thought, the two passions could coincide.

When Roca coined the #bikefishing hashtag around 2016, he had no idea that he’d start a trend on social media. The activity was something he’d gotten into on a whim while cycling through Texas with Crawford. Often, they rode or camped near water, and Roca got curious. “It seemed like a fun thing to do at the end of a day of riding,” he says. So, he bought the necessary gear at a Fort Worth shop, took a class there, and emerged an angler. 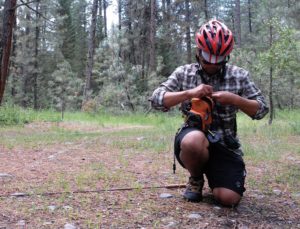 Now the duo plans their two-wheeled adventures to include fishing whenever possible — even if it’s just for an overnight or a day trip along Rattlesnake Creek outside of Missoula. That’s where they took me on a little jaunt last spring. Incessant rain thwarted our plans to join other Missoula-area bike packers for an overnight, but Sunday dawned sunny, albeit soggy, after several days of intense downpours.

I borrowed a handlebar pack for my camera gear, along with one of their test bikes: a Specialized Diverge capable of sporting wide mountain bike tires on 29-inch wheels. Roca and Crawford loaded their bikes with wading boots, a net, and a couple of rods. Roca wore a small chest pack in which he carried the smaller essentials: flies, a spool of line, a hemostat, and nippers.

Crawford and Roca live within a few miles of the Rattlesnake Creek Trail. After some twists and turns on paved roads, we hit the dirt. Over a bridge and through the woods, we stop in a forest clearing where a clever hiker or biker has carved a cribbage board into an old fallen log and thoughtfully left a jar of pegs and playing cards. But card games were not on the agenda; this was all about fishing, and Roca got right to it. 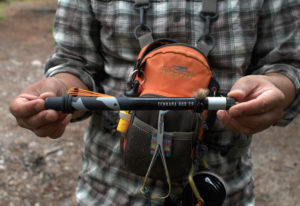 Tenkara rods can telescope down to just over a foot long. Designed to be used without a reel, they are lightweight and compact, making them ideal for bike fishing.

Roca is innately curious and intensely focused when fishing. He starts with a tenkara rod. Second only to a string with hook and bait, tenkara is probably the most minimalist fishing system around, which aligns perfectly with the couple’s sensibilities. Like much of Japanese culture, it’s elegantly simple, using only a long rod, line, and fly — no reel.

Into Rattlesnake Creek, Roca extends the Mini Teton rod made by the Idaho-based Tenkara Rod Company. It weighs less than 2 ounces and telescopes out to 11 feet, 2 inches long from a collapsed length of 13.5 inches. With rubberized pipe cleaner-type ties (called tenkara ties), Roca had fashioned a spooling system for the attached line, so it takes mere seconds for him to drop a fly into the water. But soon he determines that he needs to fish nymphs deep in the water column, which requires different line than that on the tenkara rod. So, he switches to a 5-weight, six-piece Redington Classic Trout rod with a Redington Behemoth reel. Despite a blown-out river pressing hard on its banks, Roca still manages to land a small trout on a Frenchie nymph.

According to a recent Outdoor Industry Association study, nearly half of all Americans participate in outdoor recreation, with cycling and fishing being two of the most popular activities. Roca and Crawford have been tapping into that market through advocacy since returning from their bike-packing adventures. In 2013, they worked with Travel Oregon’s Bike-Friendly Business Program, creating marketing materials that included a video for their website. In 2015, they launched their own campaign/hashtag: #RideBikesTravelDoGood. The couple consults with community leaders and trail builders throughout the country. “We have worked through the challenges of marketing small destinations to a niche audience … and have continued to collect and share these stories — so we might all learn together and build a bicycle-travel-friendly world.”

Now they’ve added fishing into the mix, and post videos on their Bicycle Travel YouTube channel at least weekly. Topics include adventure stories, shop visits, and gear reviews designed to “inspire your next adventure.” 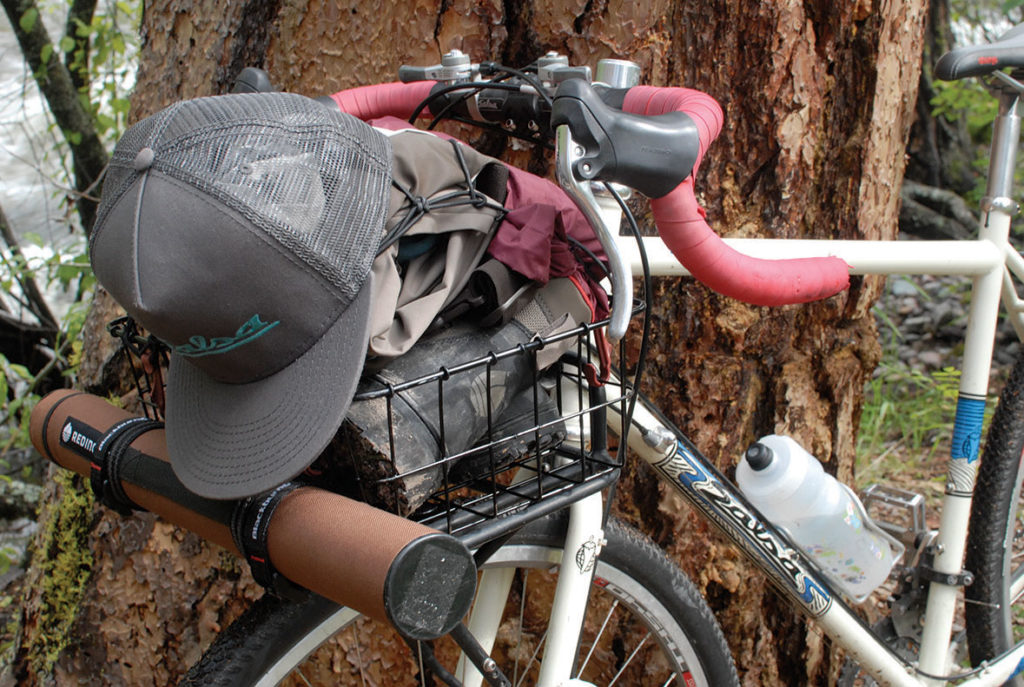 There are myriad ways to load a bike for a fishing adventure using packs attached to the handlebars, forks, frame, and/or under the saddle. Crawford packed most of what she needed for a day on the river, including waders and a rod, in this front-mounted wire basket.

Roca says it doesn’t have to be expensive to get into bike fishing. You only need (and want) the basics. After all, if you’re getting there by bike, weight is a consideration. He suggests forceps, nippers, tippet in various weights, floatant and, of course, flies and a rod. And a reel, if you’re not fishing with tenkara gear. One can get into bike fishing for under $500; about $300 for a Western-style rod and reel, or about $200 for a tenkara rod, plus accessories. Waders aren’t required — the couple often wears rubber clogs, sometimes wading boots, and shorts or quick-drying pants. The bike doesn’t need to be anything special either — just one that can be ridden on dirt. A small backpack can suffice to carry your gear, or you can purchase bike-packing or even bike-fishing-specific packs (yes, they do exist). “It can be as simple or complicated as one wants,” Roca says. But it’s clear which way he leans on that spectrum.

And though Roca still shoots photos of the pretty places where wild fish live, combining biking and fishing is another “nice way to enjoy the outdoors through multiple lenses,” he says. “Taking photos is a passive appreciation of the river. Now I see rivers by their flow. I like knowing something about the rocks and the trees. It’s a good way to appreciate the landscape.”

For Crawford, a self-proclaimed planner, traveling with Roca has taught her to let go. “When you plan too much, you expect it to go a certain way and when it doesn’t, you get frustrated that the reality isn’t meeting your expectations,” she says. “The less I planned, the more spontaneous and less rigid I became, which probably made me a lot less anxious as a person. I’m more open to whatever comes along now.”

You might say she’s learned to go with the flow.