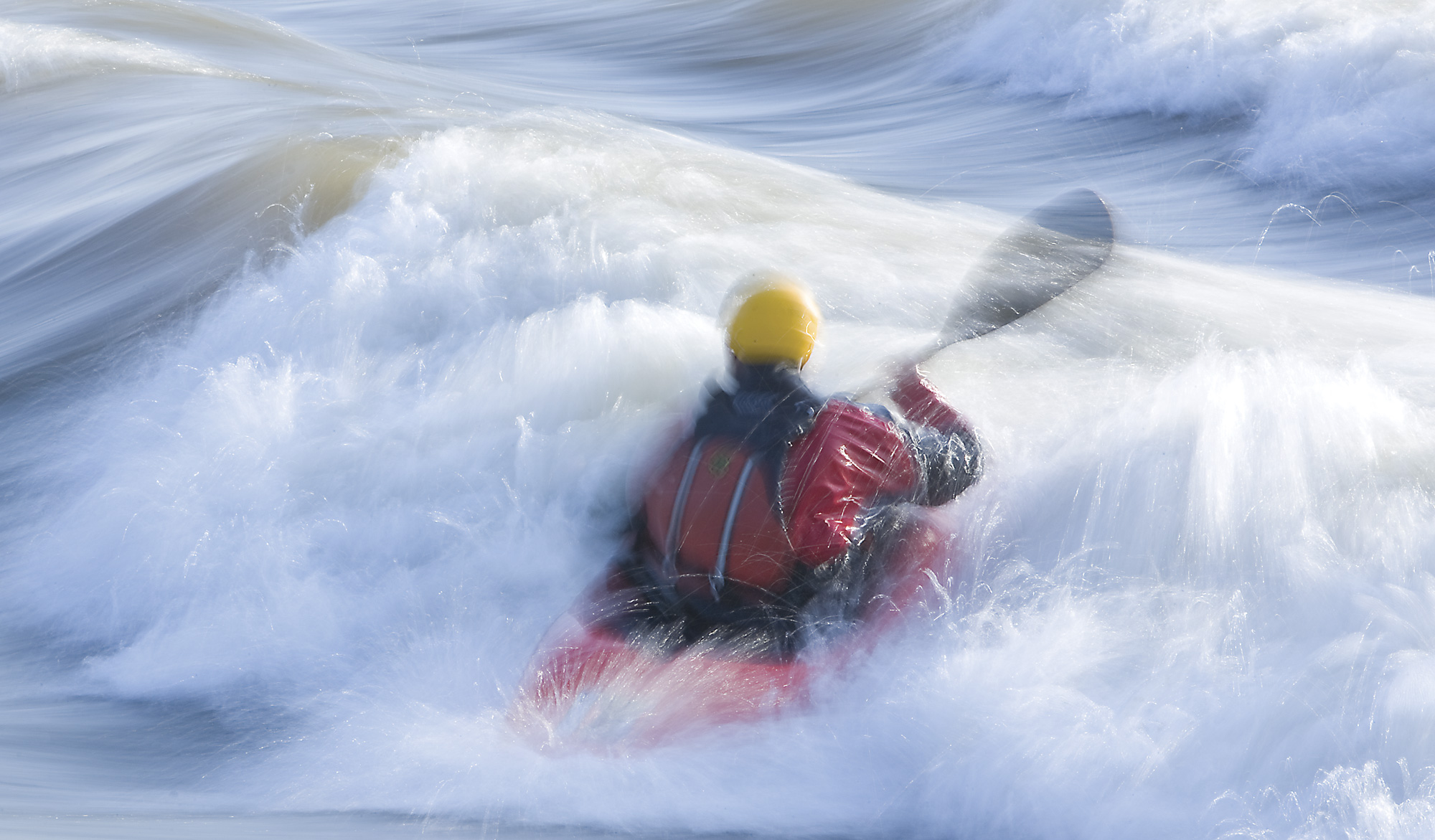 THE ROLL ISN’T EVERYTHING, but you can’t quit thinking about it. Kayaking is about the strokes — about paddling from one point to another, whether on a lake or sea or river, and doing so efficiently, with as little resistance as possible — but there’s that cool trick they do, rolling back over right-side up after flipping upside down, and while it’s not the end of the world if you don’t roll over, should you find yourself upside down in the first place, a roll is handy and helpful, a nice Plan A.

Plan B, of course, is to simply pop your spray skirt off and slither out, free and clear, keeping one hand on the kayak and the other on the paddle, and then kick to shore, drag your craft up onto land like some evolutionary being in fast-forward time-lapse, water streaming from you and your boat in torrents, and the firm ground strange and not entirely welcome beneath your feet. A profound clumsiness, in the disruption of river-rhythm.

Still, that’s the last thing. The first thing is just floating, and every kayak floats.

Our teacher is Jason Schroeder, an enthusiastic young man who, in the worst possible economic climate, is starting a company based upon fun, leisure, spare time and entertainment. There are generally two kinds of experts in any field, the one who loves something so much that he or she can’t bear to occupy anything less than the fine-whittled isolation wrought by the application of that venture out at its most extreme and challenging edges, and then the other, who loves the same subject with no less passion, but who wants to share as much of it as he or she can with any and all, no matter the student’s abilities or talents. We’re fortunate that Jason’s the latter.

The classes are held in an indoor swimming pool, in winter. There are five of us, men, women and children, and throughout the four-week course (two hours per session), Jason will have various assistants working with him. His enthusiasm is contagious and his commitment to trying to help grow his beloved sport, one possible convert at a time, is touching and admirable. For some, there’s this certain middle point in a life where it becomes quite a bit easier to just sleep through that life. The river of days quickening, things not seen or done. Dusk, and all that literary foreboding, yearning. The soup, the sea, the brine of angst.

You can’t feel any of that, when you’re floating in the pool, listening intently, trying to learn basic new stuff, and then trying to assemble that basic stuff into coherent and organic movement — the synthesis of new physical as well as mental logic, while floating in an entirely new medium. It’s good medicine.

The first lessons are about safety: what to do if you tip over upside down and, despite your best efforts, can’t flip back up. (Hint: it’s not about strength. Muscle is of no more use to the maneuver, underwater, than it would be to a blade of grass waving in the wind.)

If you find yourself unable to right, you’re supposed to drum your hands on the basking plastic boat belly, the drumming sound of it reverberating great distances across the tympanum of the water. Other boaters are trained from the very first lesson to paddle quickly to your assistance, zeroing in on you like a swarm of bees returning to the hive, surrounding you and nosing their boats up against you so that you can grip it and — easy as pie — twist, flip, roll yourself up.

It’s easy, rolling when you’re gripping something firm. It’s reversing the underwater grip on nothing but water that seems a kind of alchemy, converting down to up.

JASON CALLS IT The Hand of God maneuver — the thumping on the plastic boat, reaching out, asking for help. We practice it again and again, working in our minds back and forth between fun and safety. Is it my imagination, am I being melodramatic, or even here, in the safety of the pool’s clear waters, can I feel moving across those waters the spirit of so many who have been lost to the sport?

The thing that made me want to learn about kayaking to begin with was the river-wave in Missoula, Brennan’s Wave, named for the young kayaker and skier and Missoula native who drowned in 2001 in the big waters of Chile’s Rio Palguin River. As a tribute to his life, his friends and family — and the community — built a clean standing $300,000 wave in the Clark Fork River, just downstream of the Higgins Street Bridge, free of the dangerous hydraulic forces that can trap a kayaker or swimmer: a place where kayakers can safely practice and play in a wild river.

There’s no way you can stand on the bridge and look down and watch the sleek boats bobbing and darting into that wave — especially on a hot day in the summer — and not want to join in. Looking at that wave, too — that expression of love and admiration, and something else — you think for a moment of how this person you never met must have loved a full engagement with life. You can’t know him but you can know what he loved.

There below the bridge, herons croak and kingfishers rattle and the river’s updrafts swirl the sweet scent of cottonwoods. The sun strikes the white beach sand and pale gravel of the islands, snowcapped mountains rise all around, and for a while longer, we’re all going farther downstream, mas alla.

There aren’t that many strokes to learn — C-stroke, J-stroke, power stroke, scull — and then we start tinkering with the rolls. Upside down endeavors to become right-side up, rules and laws and logic change, but there is a series of directions: once you find you’re upside down, you’re supposed to ready the paddle parallel to the upside down boat, rotate the paddle 90 degrees, look out at the end of the paddle, carve a C-stroke (up, not deeper down), hipsnap (the main element), and  keep your heavy head down, your head should be the last thing to come up, even though under the old logic of your life you want it to be the first thing to come up.

Close, close, close, but not quite. I come halfway up, then slide back over upside down. Halfway, then back upside down, and into the gracelessness of the wet exit. It just takes practice. We practice.

I head back to the house after the second and third sessions hip-hammered from so many attempts. My feet are like blue meat from so much bracing, and the feeling, driving back to the house each time, is the exhaustion that a deer might feel after having been chased a long way by wolves. But I feel different, in the car, after having been in the boat. I feel more alive. “Bust it out,” Jason exhorts us, pushing harder with each lesson. I’m living on aspirin. The pool is starting to feel closed in, I’m imagining rivers. A young girl in our group is the first to roll, followed by a young woman.

I’m trying. I’m getting closer. I think about it, I play the steps over and over in my mind, and try to link them together into one movement. Bust it out, Jason keeps telling us. Parts of me are quick — hands, feet — but there’s a lag on my hip snap. I can feel my brain discharging the order with great will but the electrical current trickles as if through cold molasses. I’m still trying to muscle it. I can’t let go of that mentality. It doesn’t help that the whole lower half of my body is encased in plastic; I keep trying to use that force, too, even though it’s useless, in the tube.

By the end of the last class I think I almost get it. Jason’s standing in the pool in front of me and it’s possible he gives me the tiniest bit of help, but possible also I would have come up in the roll without that feathery fingertip of assistance. It’s possible.

I thank him, at the end of that last lesson, and then I do a bad thing. I go out to the car and drive back to the house. I look in the paper, and on Craig’s List, for a used boat and gear — there are several offered in yard sales — but I don’t buy one. The recession is just a little too deep. I’m fighting just to stay alive.

I let the instruction trail away. The summer gets away. The recession deepens further. Work, work, work. Family time, and a quick bike ride each evening, a hike or camping trip now and again, but there’s no time for kayak practice, and no money. Then a rotator cuff tears, and I can’t even raise my hand without yelping, and, and, and … And then winter comes.

The next spring I’m in a restaurant, waiting on my order of fries and a hot dog, when Jason walks in. He says he’s starting a new river organization, the Montana Rivers Association. He says he knows costs are prohibitive for some folks these days, and he’s going to be renting boats out at $5 session. He says he’s been thinking about my rolls — my near-rolls — and has a boat he wants me to get into.

Winter and the high run-off of spring passes, it’s going to get warm again. The wave is still there, will always be there. My shoulder is still torn, but I go buy one of those little elastic rehab stretch-straps, to try to heal it back into service; I try to put back together something that is trying to slip away. This year, if it heals up. I like standing on the bridge and imagining myself gliding through that wave. Dipping a paddle into the current. I can see it. Even if the result ends up being a wet exit, a wet exit on a hot day, I need to slide through that pretty wave this year. There are worse things than a wet exit. Not getting on the river at all would be a worse thing. This year. Nothing’s changed, from the river’s standpoint, only mine, one more year, downstream. 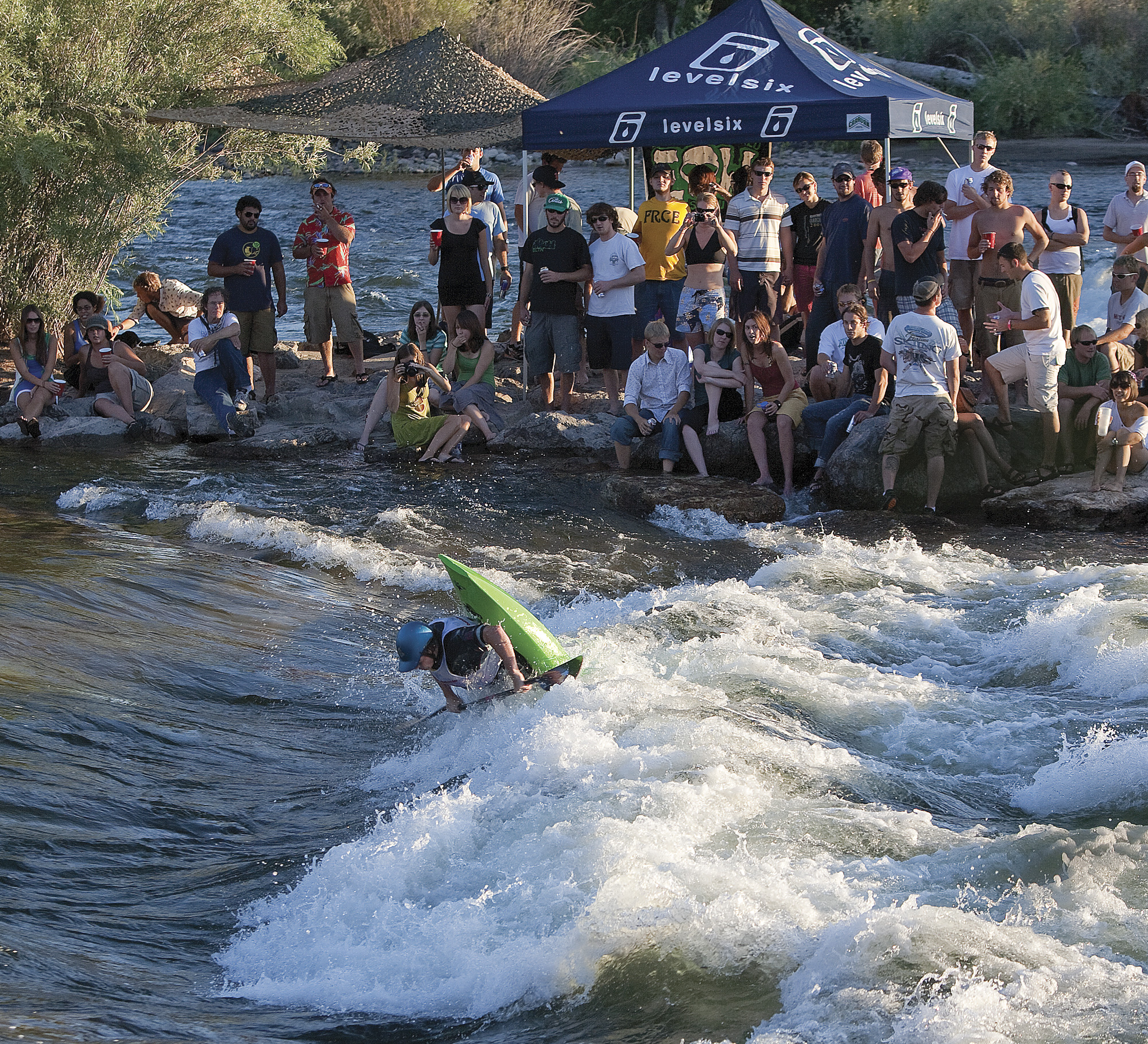 Onlookers watch a kayaker at Brennan’s wave. The clean standing wave is free of the dangerous hydraulic forces that can trap a kayaker or swimmer. Photo by Nelson Kenter 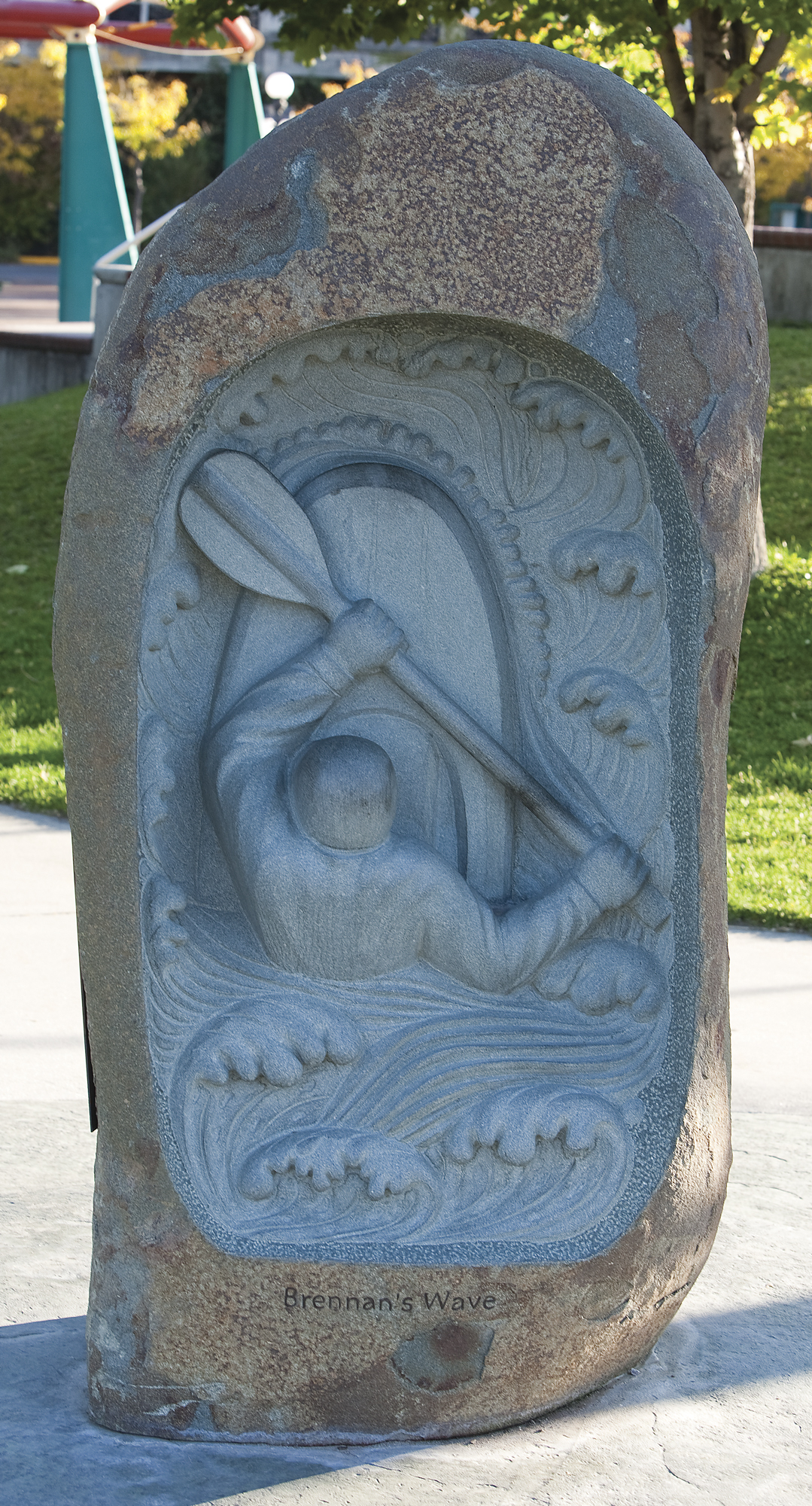 Brennan’s Wave, just downstream of the Higgins Street Bridge in Missoula is named for the young kayaker and skier and Missoula native Brennan Guth. Friends and family built the wave as a tribute to his life. Photo by Nelson Kenter