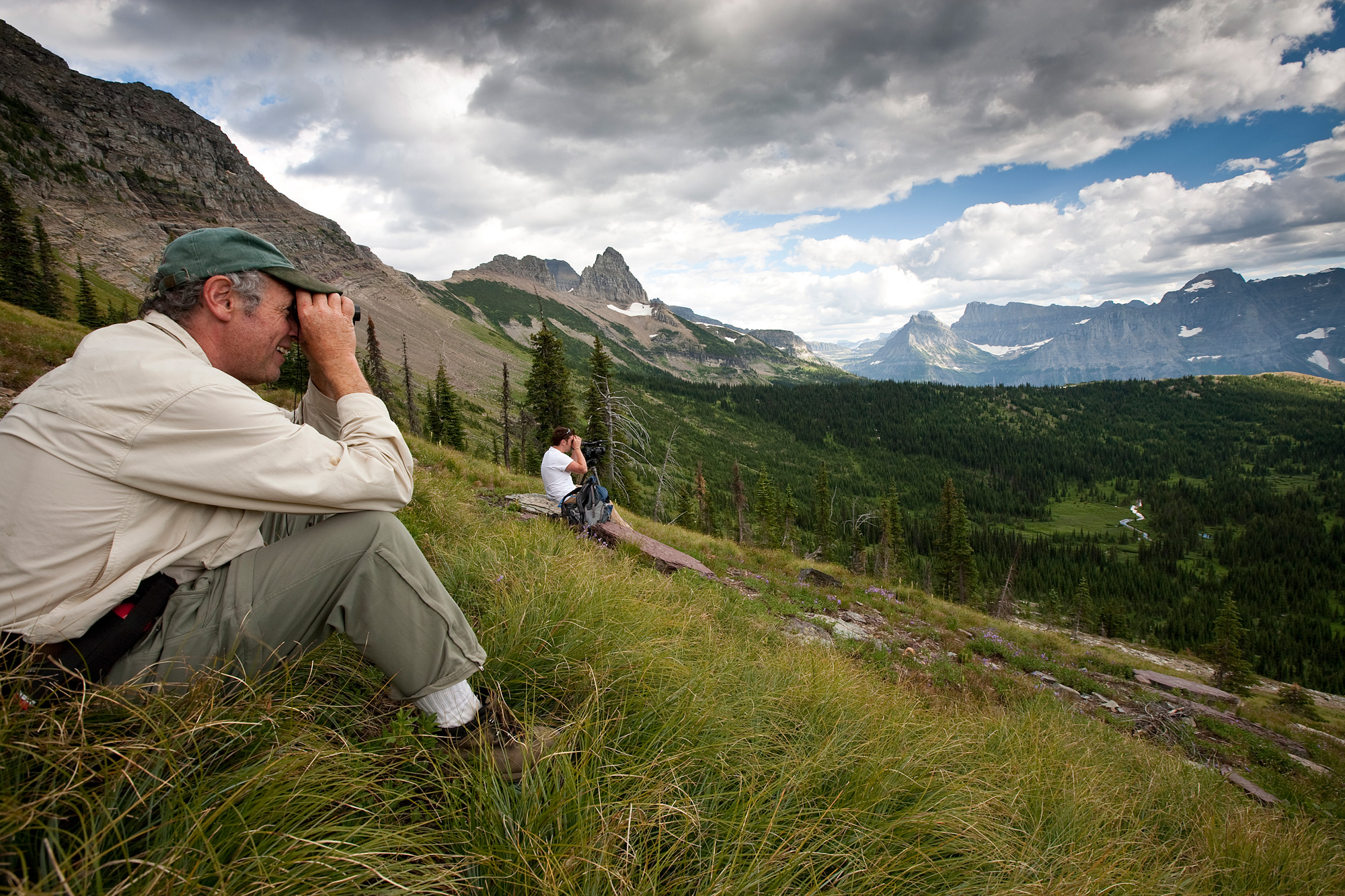 When young Doug Chadwich was 7 years old, his father gave him an old-style, 18th century brass microscope — a simple, but deliberate gift that opened up worlds of wonders for the young man, who today travels the world as a National Geographic correspondent, reporting on wolves and whales, big bears and mountain goat, from the Congo headwaters to Siberia to the Great Barrier Reef. He’s reported on the natural world with more than 50 features for the storied magazine, but his favorite place to write about his adventures and scientific discoveries is right outside his door near Glacier National Park.

“As a kid when I started putting stuff under that microscope, I was sunk,” says Chadwick, 62, sipping on some dark coffee at Montana Coffee Traders. His face is weathered from so many days in the high alpine. “There were worlds within worlds and they were alive. I’d pick up dust from the corner there. Pond water we were splashing through. It was all wheeling and teeming with life, forms and wonders. Why wouldn’t you get into biology?”

A self-described “science geek” at age 8, Chadwick set up elaborate experiments with fruit flies in his basement in Spokane, Wash. — much to the dismay of his loving mom who would find the escaped flies snacking in the kitchen. (“Oh, Dooouuug! Come here please!”) Young Chad moved from culturing molds and ordering science kits, to embarking on independent field study research during high school, then on to the University of Washington where he graduated with a bachelor’s degree in zoology.

“There are other forces at work out there,” he says, with a pensive look. “I just wanted to know what they are. Once you start posing the question, there are so many marvels — you want to know what makes it all work.”

This drive to pose difficult questions and seek hard answers led him to graduate school at the University of Montana, where he worked on a four-year mountain goat project near the edge of the Bob Marshall Wilderness, earning his master’s degree in wildlife biology. This landmark study would begin to steer his career in remote directions, studying animals that the world knew little about. The available literature on mountain goats was slim, “So I went to live with goats until someone called me back.”

His passion for wild things next brought him to Glacier National Park where he worked as a seasonal biologist and continued to study goats — the park’s symbol — for the next three years. Chadwick also served as head of the Flathead chapter of the Montana Wilderness Association, flying back to Washington D.C. to lobby for the Great Bear Wilderness and the Flathead Wild and Scenic River status — complete with John Denver singing his testimony to the assembled senators.

“The wilderness work and the lobbying and the environmental writing go hand-in-hand with the luxury of being able to write about natural history and the wonder of animals,” says Chadwick. “I don’t see how you can’t be engaged.”

Today he is vice chair of Vital Ground, a land trust, which he helped found to protect and restore North America’s grizzly bear populations and other wildlife by working to conserve key habitats on private lands. He also played a role in getting grizzlies listed as threatened in 1975.

“Wildlife management back then was science with a social goal — to produce food and recreation for sportsmen,” he says. “Animal behavior and genetics didn’t figure into it in the ’70s. It was all about how we can get the maximum sustained yield for hunting. It works for certain animals and not for others. Bears and goats were falling through the cracks. The ’70s were a real extractive time.”

During one trip Chadwick made to the Capitol in 1976, a National Geographic researcher approached him with an invitation to the editorial office. He hit it off with the chief writing editor who then flew to Montana and visited Chadwick in the North Fork near Polebridge, staying with him in a remote cabin Chadwick had recently purchased with his wife, Karen Reeves, a forester and fire lookout. The editor assigned Chadwick a feature on wild and scenic rivers, then a feature story on mountain goats, “and it kind of just went from there.”

Chadwick’s 1983 book on mountain goats, A Beast the Color of Winter (where he first coined the phrase “the last best place”) launched him into the literary scene. Since then he’s written 10 other books, most recently, The Wolverine Way (Patagonia Books, 2010), which is now in its third printing. It’s the least scientific book he’s written to-date, a chronicle of his adventures while volunteering on Jeff Copeland’s 2002-2007 Glacier Wolverine Project, a landmark study of Gulo gulo, one of the least-known wild animals on the continent.

Wolverines are also likely the toughest animal, pound-for-pound, that walk the planet. These thirty-pound “gluttons” with a revved-up metabolism cover hundreds of miles with their noses testing each breeze and footprint, jump 50 feet down a cliff in a few bounds to nail a marmot, fight off wolves for carrion, and quickly scale tall peaks to sit at the summit for a brief sniff before bounding down the backside avalanche chute. How best to describe them? “Simply badass” says Chadwick.

How best to describe Chadwick? “Mischievous.”

This apt description comes from Rick Ridgeway, vice president of environmental initiatives at Patagonia, who also oversees the books division. “As a person, I enjoy Chadwick’s sense of irony,” says Ridgeway. “And he transfers that into his writing. The way he writes is the way he lives. There is no separation between the flesh and blood hiker in the hills and Chad the author.”

As an example of Chadwick’s quirky way of looking at the world and his writing style, Ridgeway points to a passage where Chadwick comments about how few wolverines are left in the lower 48: They total no more than 500 and more likely number just 300 or fewer. To make a point about their present status, you could cram all of them into one person’s mountainside trophy home. It would be a snarlfest, but they’d fit.

As he continues to perfect the art of animal storytelling and works to expand the reach of his audience, The Wolverine Way shines because it contains the most people and personalities, adventures (even a wolverine murder mystery of sorts) and, well, just plain fun. “I feel the way to get people on the side of the living communities that we share this planet with is not to be an alarmist, but to help people see animals a little bit more the way I see them.”

Chadwick emphasizes that animals like wolverines have languages, emotions, family structures, and even culture where they pass along learned information from generation to generation. Watching grizzlies slide down snow banks with cubs on their laps, playing catch with a wild elephant, and witnessing the bad-assness of the wolverine in motion have been moments for Chadwick that have inspired him to share his life’s work.

“There are great tales to tell and great animals to celebrate,” he offers. “So when I end up with a huge stack of notebooks, I usually decide that this has to be a book. Ultimately I don’t think we will conserve the living world because writers argue about the value of habitat integrity or biodiversity — all the things that have been tried in conservation. Ultimately we need to let animals into our moral universe and accord them the qualities they deserve and that they share with us.”

For Chadwick, animals are just plain essential. He laments the huge gulf created between humans and other life forms, where we view ourselves as special creations. He wants people to reconsider looking at animals just as food, or décor, or an amusing hobby — or a major nuisance like the wolf. He recently wrote a cover feature for Geographic called “Wolf Wars,” an introspective and scientific look at the raging debate about the management of this feared species.

“We think we’re what really count on this planet and we have this whole other set of rules for animals,” he says. “If we admit them into a common sphere of existence, it’s very hard for us, because we want to be at the pinnacle. Once we see ourselves in them, and them in us, then I think we start truly conserving nature.”

The struggling population of wolverines is a piece in the puzzle (there are perhaps 40 to 50 left in Glacier), but the greater realization for Chadwick is that wildland corridors are the key to wolverines, wolves and beyond. Everything is connected. And the natural hallways between wildlife strongholds need to remain intact. The “freedom to roam,” an environmental movement that advocates safe corridors of travel as the best bet for wildlife survival into the next century, is the keystone behind every untamed thing Chadwick loves.

“Here’s why we need intact functioning ecosystems,” he says. “The animals have the answers. Until we can see how the wolf shapes the elk over 100,000 years, we’re not seeing it right. We’re always busy classifying and fragmenting. We need to see nature as interconnected. I want to convey this in stories.”

As Chadwick prepares to leave for his next Geographic assignment in Mongolia to report on desert-dwelling grizzly bears, he tells me — and I’m not surprised — that he doesn’t view himself primarily as a writer. “I’m just a curious naturalist,” he says, sipping the last of his coffee. “I’m still a kid with a microscope.” 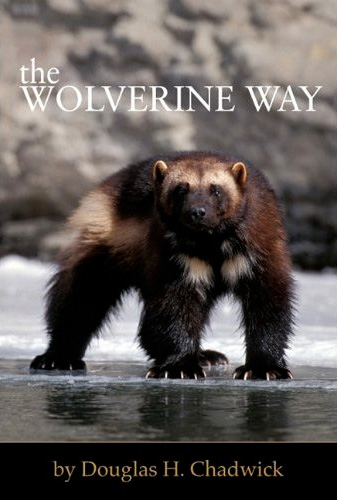 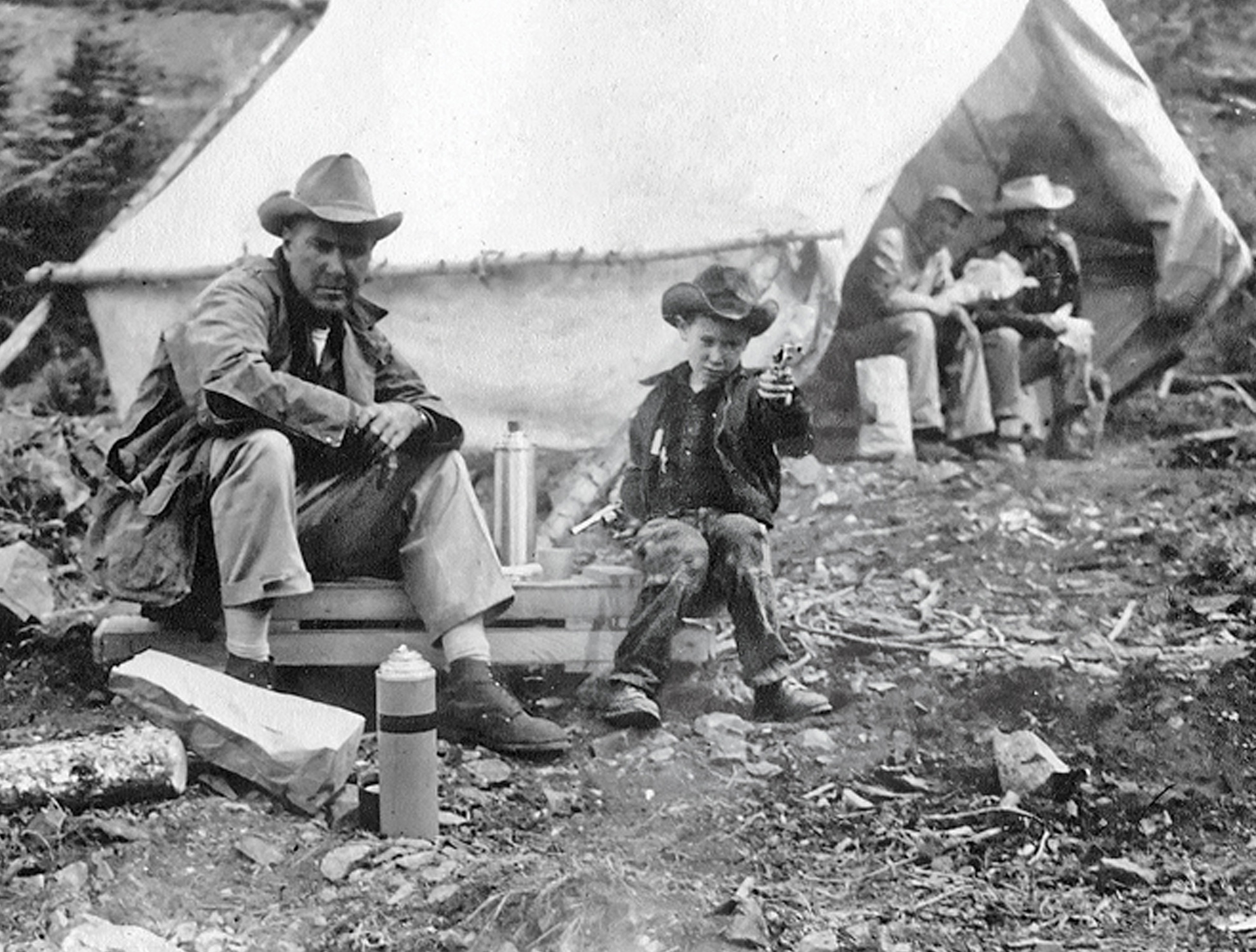 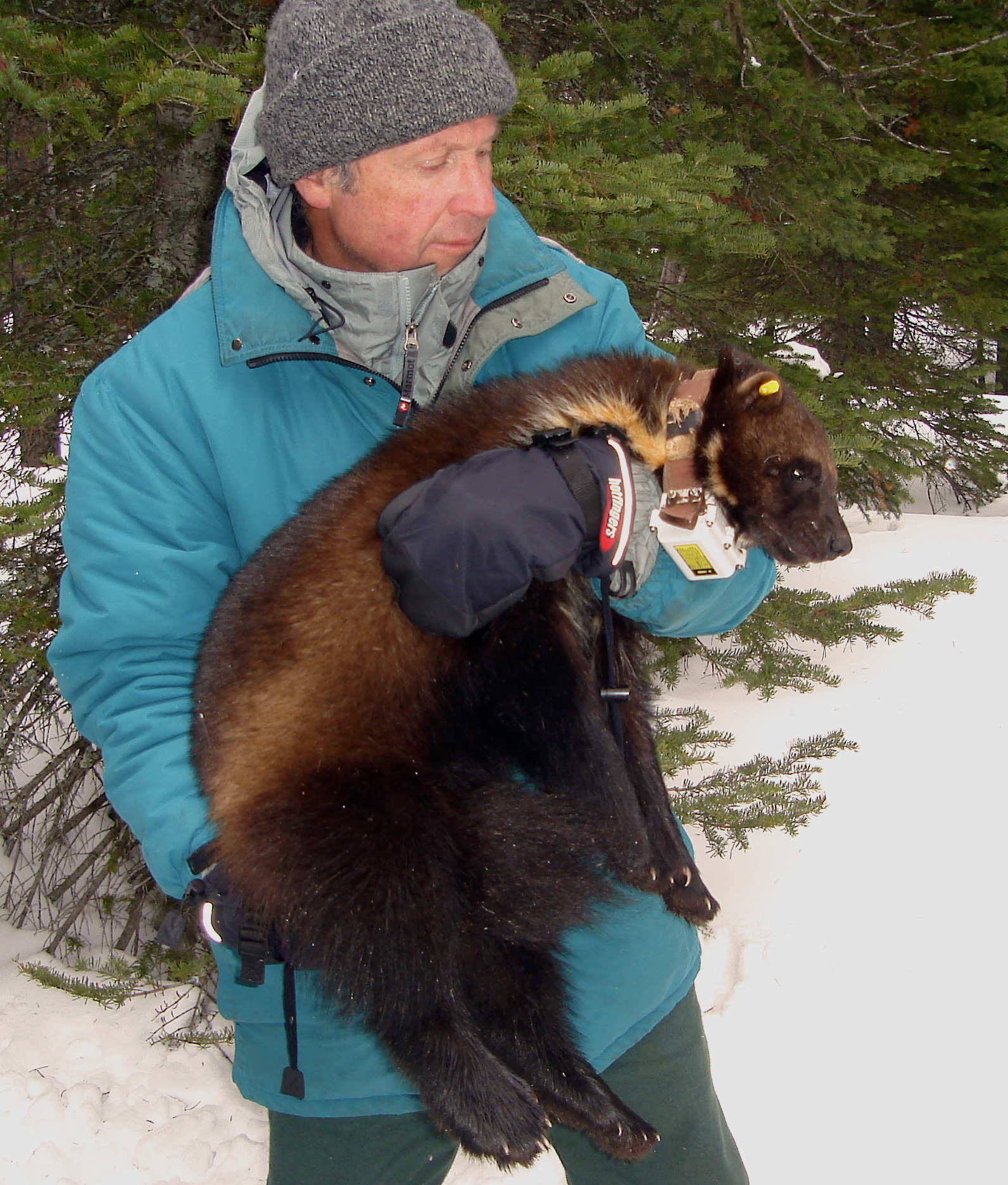 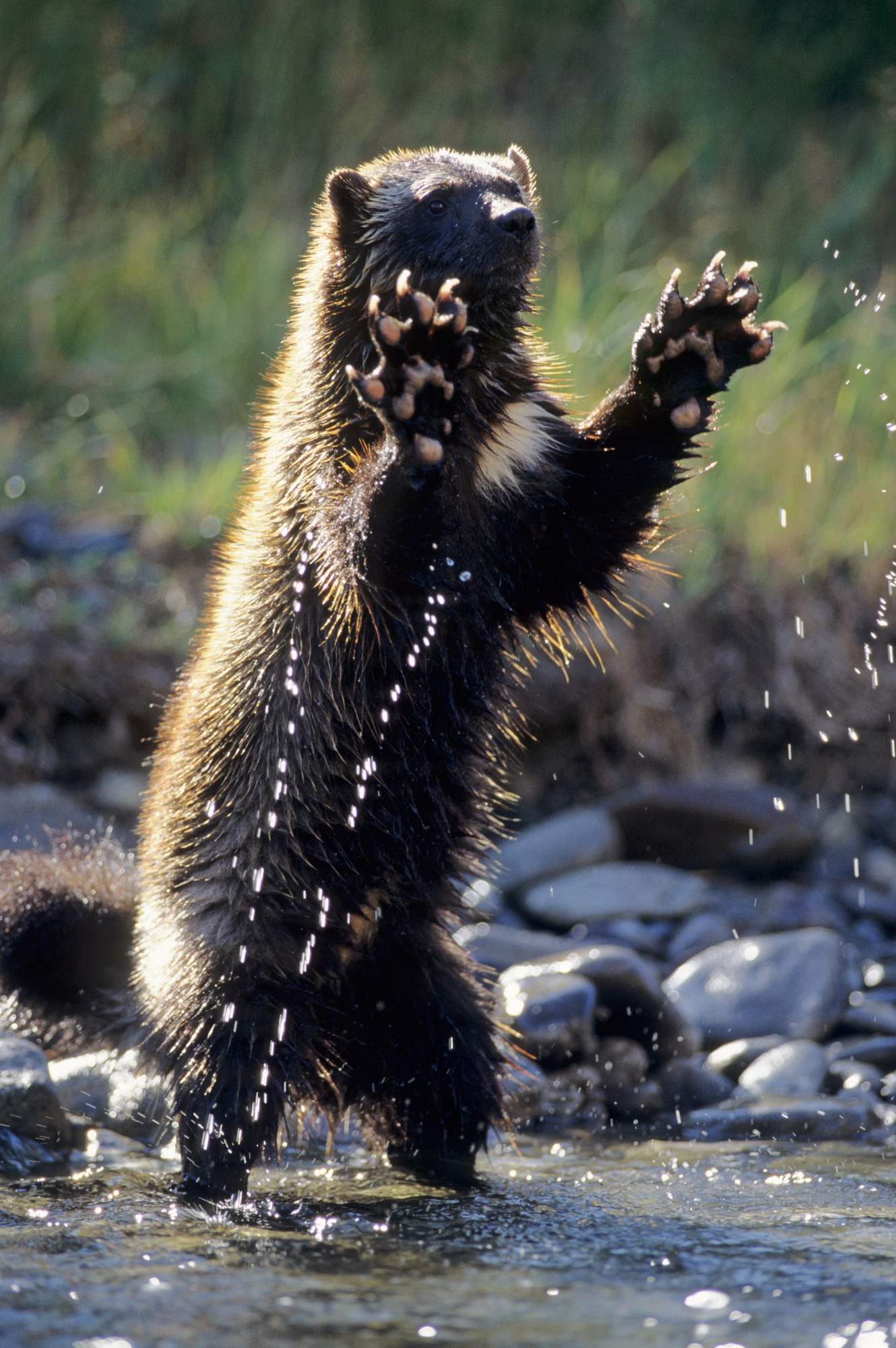