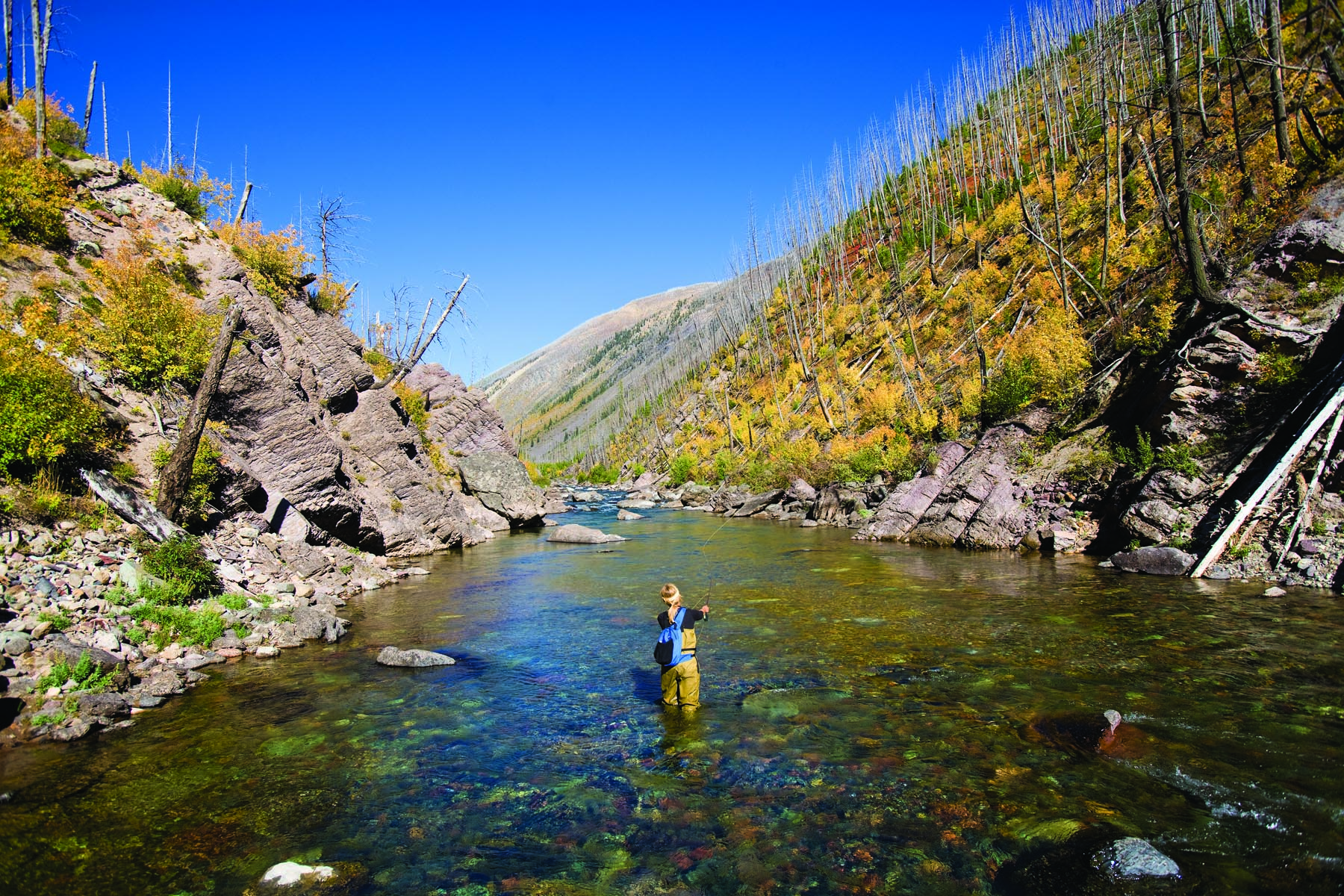 “YOU SHOULD HAVE BOUGHT A NET,” Tony told me as we drove up the river corridor, catching occasional glimpses of crystal-green water through the trees.

Well, maybe I should have. I’d been meaning to buy a fishing net for a while, and this area had a reputation for big trout. But at my level of fly fishing expertise, I was afraid carrying a net would constitute an unseemly show of confidence, like you see in those guys who propose on a Jumbotron. Yes, the fish will say, yes. And I have to admit that fish — even big ones — weren’t my chief concern when planning for our trip. I hadn’t even bought flies. My mental resources were allocated more like this: 10 percent fish, 90 percent bears.

We were headed up the Blackfoot to a place where the river gets smaller and the bears get bigger. Grizzlies. It was a cool, sunny morning in early fall, and the bears were bound to be cranky as they prepared for hibernation with a period of ferocious binge-eating — a state called hyperphagia — that can be easily understood by any woman who has ever been pregnant. I packed my bear spray and checked it twice.

Tony sometimes scoffs at my excessive caution, but after we parked the car, I noticed that he was strapping on a .45 in a chest holster. The last time he’d camped nearby, our dog, Scout, had freaked out over some snuffling in the bushes and they’d both ditched the tent for a twitchy night in the SUV. But the gun didn’t really make me feel safer around grizzlies. Don’t make me quote the studies.

“Where’s your bear spray? It’s going to look bad if you shoot your wife, accident or not.”

We found a reasonable route through the woods and I called out “Hey, bear” as we followed Scout down a steep fishing trail to the river. Very pretty. It was small for a river but large for a creek, edged by a broken band of willow and alder backing up into conifers. The water was cold and so clear it looked sterile. You could see nearly every stone on the stream bottom, all jumbled together in pink and gray. But there were plenty of boulders scattered throughout to provide refuge for fish.

I felt the leftover 10 percent of my brain fill with hope. In my head, I could picture the lunge and strike of a big, beautiful fish attacking my streamer. And just to be on the safe side, I also visualized a few young, irresponsible cutthroats jumping on my dry flies — perfectly delivered, of course — in those little pockets below the boulders.

I popped open my fly box and pulled out an orange stimulator, my first test subject. Now it was just a matter of trying to find the right fly …

Hours later I looked at Tony and said, “Good thing I didn’t buy a net.”

The only fish we had seen was a picture of a bull trout printed on a sign. All the fish had said no.

The funny thing about fly fishing is that when you have hope, you can enjoy it even if you’re not catching anything. But take away hope and all you have left is casting practice, which eventually gets old.

It had been a frustrating morning. We had gotten no feedback, except for that total lack of feedback that, in itself, constitutes feedback. We’d had no hits, no misses and no refusals. We’d seen no rises, no baby fish in the shallows, no signs of life, period, except a handful of bugs and a single dipper flying just above the surface of the water. The river didn’t even smell like fish.

On the plus side, we had also found no sign of grizzlies. Bears had receded in my mind to the point where they swapped positions with fish. It must be hard for fear and frustration to coexist.

By noon we had abandoned all strategy and begun switching flies with a speed that usually indicates both cluelessness and desperation. We had also abandoned our first fishing spot and driven a couple of miles upstream. It was tricky walking along the banks, a mishmash of squarish cakes of rock that were dead slick, even when dry. But the water looked good. Tony and I stood below a teal-colored pool that under ordinary circumstances would raise my heart rate by several beats per minute.

“You’ll get something here,” he said.

Well, maybe. That sense that anything might happen had been replaced, hours ago, with the certainty that nothing was going to happen. And my waders were definitely starting to leak, enough to soak through the bandages on my injured toe, though the seepage was cooling me off after that sweaty brush-crush back to the car through dog-hair pine, so dense and impossible I would have thrown a tantrum if I’d had the room. Yeah, that too.

I secured my Woolly Bugger with yet another tedious clinch knot and flung it out into the current, letting the split shot drag it down, not expecting anything, but hoping for at least a refusal. There, I got one — a refusal, that is. A large trout chased the streamer for a full second before realizing its mistake and making a 180-degree correction. Back to the depths. Boy, they were smart up here.

It was time for a break. I rummaged in my pack for a sandwich and my hand fell on a pulverized fortune cookie I’d stuffed there on our way home from Glacier. Suddenly it seemed appealing, even though we all know fortune cookies taste like sweet dust and their messages come from a database. Scout waved at me and I divvied up the particles with her as I smoothed out the little slip of paper. My fortune was a bit guarded, but those few bland words were the most encouragement I’d had all day: You may have a new opportunity soon.

OK, I’d give it one more shot. I replaced my streamer with a mothy-looking thing I’d found on a bush somewhere — another sign of desperation. I got a hit, an actual hit, but failed to capitalize on it because I was falling down at the time. After that, another half hour of casting practice.

You may have a new opportunity soon. Then again, you may not.

I no longer worried about bears. We’d just gotten skunked.

Back at the car, Scout curled up on her beach towel in the back seat. She’d had a great day — God’s gift to Australian shepherds. I peeled off my soggy waders and surrendered to a sudden craving for Fig Newtons. Tony rejected my offers of food and started driving downstream in a way that seemed driven.

“You can’t take it, can you? You’ve gotten spoiled.”

I will say this about my husband: after working as a ranger more than half his life, he knows how to read a land-status map. He can find pockets of public land that most people overlook. And he had a fallback plan. After what seemed like hours (but is actually an undisclosed amount of time that offers no clues to our destination), Tony pulled off the road next to a culvert. He was still grumpy. “Let’s try here.”

I was tired and hot but when your husband is having a fly-fishing identity crisis, it’s your role to be supportive. I guess.

We ducked down the side of the culvert and slid into the creek. What a difference from where we had fished earlier. It was obvious we wouldn’t be seeing any bull trout here, even on a sign.

The stream wound through a meadow in no particular hurry, its meanders disguised by large pockets of willow. The water was cool but not cold, translucent but not crystal. It flowed over a bed of sand and gravel, sometimes even mud, slowing for an occasional hunk of rock. And there were signs of life everywhere. Most of them pointed to a large, hairy mammal with a fierce appetite for, well, grass. Cows. The cows were gone that day, but hundreds of tracks and cow plops decorated the stream banks.

I noticed dark shapes scattering along the stream bottom like sparks. Not just cows here. Fish. I let myself hope a little.

Tony took the first fish, a mid-sized brown, with a long cast upstream. Then he caught another, just like that.

It took me a little longer. The trout were sensitive. They would rise willingly but disappear in a blink. Even Scout’s short little shadow trotting along the fishing trail sent them racing back and forth in a panic.

After watching for a while, I kneeled down in a snarl of weeds about 10 feet off the bank. I couldn’t even see the water. Tony looked over.

I cast over the tall grass and when I heard a fish jump for my little grasshopper, I pulled on the line. I had to stand up to see what I’d caught. A brook trout. It was a start.

Using my unconventional strategy, I caught several decent browns, another brookie and a cutbow. But I knew I was hogging all the decent water as we worked our way up the creek.

“Mind if I fish that pool ahead of you?” Tony asked.

I had second thoughts once I heard him yelp. When I went to check, I saw his fly rod bent like he was towing in a boat. Tony had caught himself a cutthroat, a big fat one, the kind of cutthroat you would be thrilled to catch anywhere and shocked to find in such a small stream.

“We should have bought a net,” he said.

I held the rod while he climbed in the water to release the fish. He showed me the fly. It was one he had tied himself, the one I had criticized for being too big and sparkly.

“I’ll never catch another cutthroat like this one,” he told me.

Now that he had his personality back, Tony started giving me a suspicious number of compliments — like “you got a grand slam” or “that was a really nice brown” — that led me to believe he felt sorry for me. He had caught the monster cutthroat, and I had caught a motley collection of regular Joes. He even produced some of my favorite grasshoppers that he said he had purchased just for me.

The grasshoppers were tan and brown and orange and practically came with their own PFDs — just the way I like them. With my first cast, a fish leaped several feet in the air in a perfect arc. Two more casts, two more crazy leaps. Now that was feedback. I didn’t catch anything, but so what?

Tony kept up the encouragement until finally I said I would feel better if he stopped trying to make me feel better.

The truth is that I felt fine. Because the funny thing about fly fishing is that you just need to believe that you can, or might, catch the big one. You don’t need to actually catch it.

Later, driving home along the Blackfoot, I remembered that little slip of paper from my fortune cookie. You may have a new opportunity soon.

Of course I will.

Maybe I’ll even buy a net. I can always let Tony carry it. 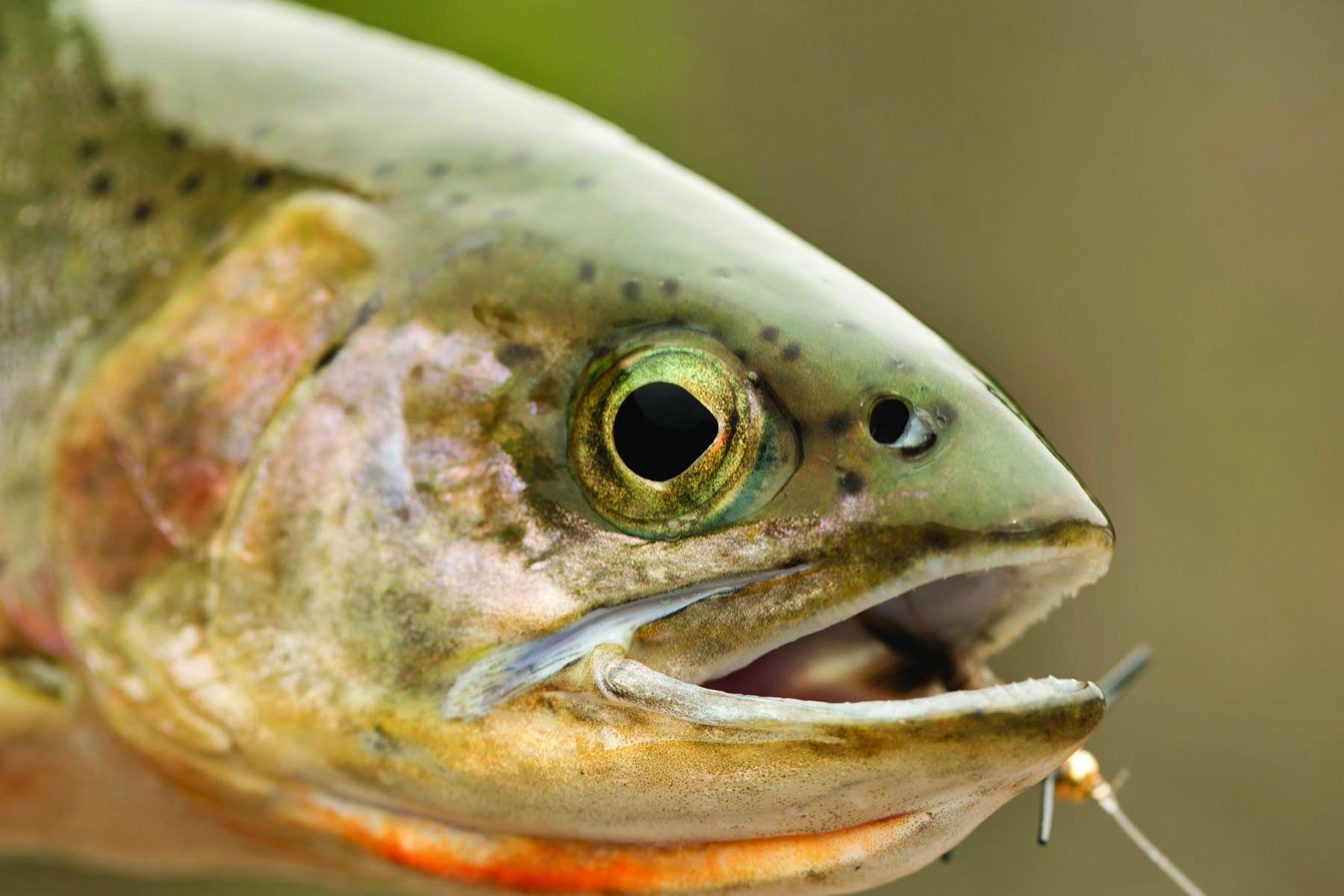 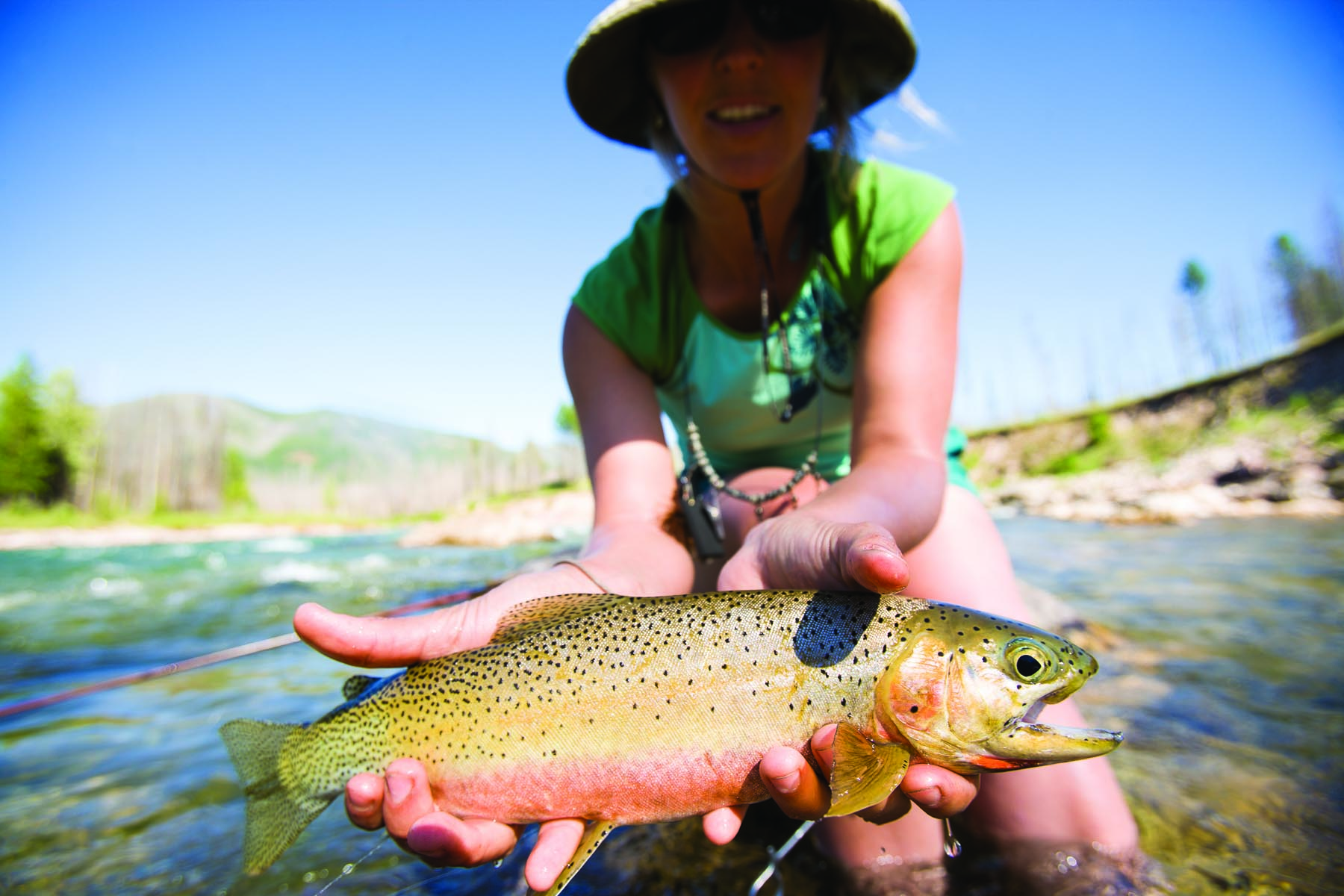