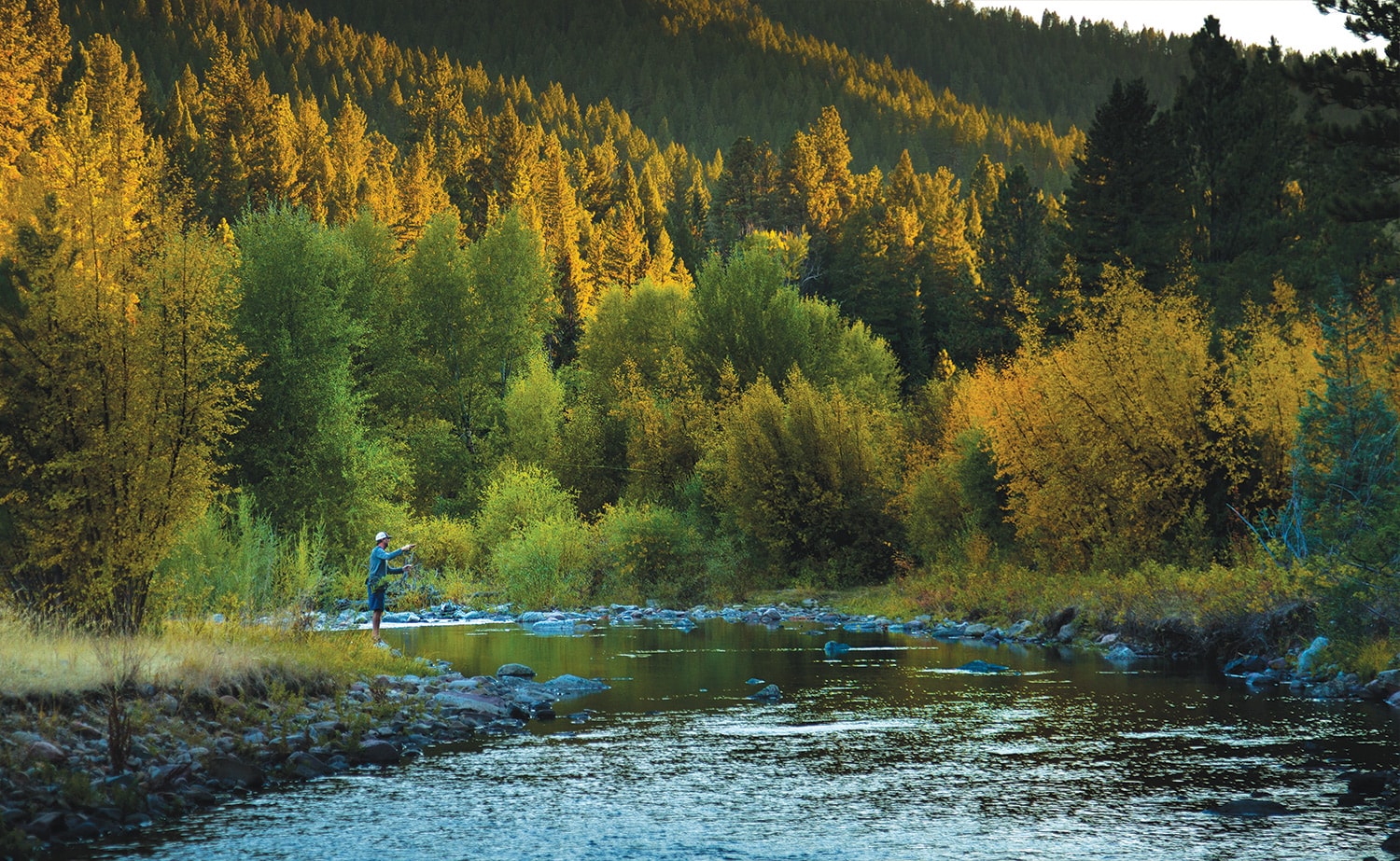 Author Brian Hurlbut tries for a prized Tenderfoot Creek trout as the evening sunlight illuminates the forest behind him.

08 Feb Fall Fishing on the Tenderfoot

ANYONE WHO HAS FLOATED Montana’s Smith River surely has heard of Tenderfoot Creek, one of the main tributaries flowing into the legendary trout stream. Many anglers have waded up the Tenderfoot from the Smith, in hopes of landing a native westslope cutthroat or a big brown trout lurking in one of the many cliff-lined pools. Well-worn signs mark Trail 342 as it leads down toward the Smith River.

The land on the east side of the Smith where the Tenderfoot enters is private, meaning that only the most intrepid anglers have had access. (Montana’s stream access law allows the public to hike along the river bottom to find a fishing spot.) However, thanks to a historic land purchase completed in 2015 (see sidebar), most of the lower Tenderfoot, upstream from the private land, is now open to the public. You just have to hike in from the top, which is easier said than done.

When I first heard of the land purchase — which converted more than 8,000 acres that were previously held by the Bair Ranch Foundation into public land now managed by the Helena-Lewis and Clark National Forest — I immediately put the Tenderfoot on my short list of places to explore. I had heard about the excellent fishing, the elk roaming in the high meadows above the Smith, and the stunning scenery, reputed to be as good as anywhere in Montana. I was curious: Now that the land was public, what would it be like to backpack down to the Smith? Was it even possible? What was the access really like? And how many people even knew about this?

After a few fall attempts foiled by bad planning and earlier-than-usual wintry weather, photographer Craig Hergert and I finally set off this past September to answer some of these questions.

Accessing the lower Tenderfoot means traveling through White Sulphur Springs, much like the drive to the put-in for floating the Smith. After driving more than 50 miles from town on mostly gravel roads, we arrived at the trailhead to find a lone wrangler on horseback rustling up a few stray bulls. He paid no attention to us as he rounded them up and went about his work. With more than 30 stream crossings, the trail along Tenderfoot Creek calls for some creative hiking strategies.

The nondescript trailhead has no facilities, and no signage indicating which way to go, but is situated in a small meadow along the Tenderfoot. A map from the Forest Service office in town gave us general directions, so we crossed the stream on an old bridge and headed west on a two-track trail, marked as number 342 on the map. Although the trail was somewhat hard to follow and filled with several creek crossings, we hiked a little more than four miles to a nice streamside spot where we set up camp below some rock walls with just enough time to wet a line in the twilight. It wasn’t long before we caught the first fish of the trip, with both of us landing a westslope and a rainbow each. On the smaller side, but beautiful fish nonetheless.

After a warm fire and a good sleep under a clear sky, we awoke the next morning to a beautiful fall day, and loaded up our packs for the hike toward the Smith. We opted to not camp further downstream, as we wanted to move fast and were hoping for more time to fish. We also anticipated many more creek crossings, which ended up being correct as we counted more than 30 as we made our way along the trail. A perfect fall night and a fire make for quintessential Montana camping.

The going was slow, not only because of the crossings (I ended up hiking in river sandals) but because the fishing was getting better and better the further downstream we hiked. Seemingly around every corner was another monster hole, complete with beautiful rock formations — indeed the Tenderfoot is like a miniature Smith River canyon — and lots of fish. We each caught several beautiful rainbows and a few more westslopes, reveling in the fact that we had the whole drainage to ourselves.

We knew we were getting close to the Smith when we hit the fence line marking the private land, and we could see the towering canyon walls looming in the distance. From that point we basically waded or walked along the streambed until we finally popped out on the Smith, nearly 7 miles from our camp and 11 from the trailhead. It was an eerie feeling, being in the main canyon that time of year, which sees minimal river traffic. Each of us has floated the river numerous times, but there was something magical about standing at the Tenderfoot confluence with no boat, no pile of gear, and no one else around. One of the many beautiful rainbows caught on the Tenderfoot.

The hole just upstream from where the Tenderfoot enters is a quintessential Smith River location. You just know there are big fish in there. We rigged our rods, but then noticed the time. It had taken us so long to hike to the river that if we didn’t start back soon it would be dark by the time we arrived at camp. Agitated but not deterred, we started fishing, and on Craig’s second streamer cast he landed a big one. So big that he thought he’d snagged the bottom. He reeled in a monster brown that was larger than any trout I’d seen on the Smith. He brought it up to his hands and, as I fumbled with my phone camera, the fish made a break for it and disappeared back into the depths. We both stood there in disbelief, almost laughing at the situation. Would anyone believe us?

At that point it was useless to keep fishing, as time was not on our side. We’d accomplished our mission — to make it all the way down to the Smith — and had landed the big one. We packed up and hit the trail, my already blistered feet dreading the dozens of creek crossings waiting for us. We made it back just in time for some more twilight fishing on the Tenderfoot, but too tired to really put forth much of an effort. Instead, we made a fire, ate dinner, and traded fish tales until the shooting stars and frosty fall air put us to sleep. Deep pools and interesting rock formations are around every corner of the hike.

The next morning I woke early and climbed a few hundred feet above our camp to check out the sights. I arrived to an expansive meadow filled with gold-hued grasses and surrounded by tall pines. I walked out into the middle of the field, where it seemed like I was the only person on earth, and just stood there alone, taking in the view. High-elevation meadows dotted the conifer-coated landscape as far as I could see, with the rounded, snow-capped peaks of the Little Belts rising to the northeast. If someone asked me to describe the perfect Montana landscape, this would be it. Thankfully, the Tenderfoot and this view are protected in perpetuity for all of us to enjoy. Go ahead, put it on your list.

What does it take to turn more than 8,200 acres and 13 square miles of privately held property into public land? The answer can be described in two words: cooperation and money.

The Tenderfoot Creek land originally belonged to the Charles Bair family, situated in classic checkerboard style with more than a dozen sections in the middle of a national forest. The Bair Ranch Foundation (set up to manage the land after the last of his two daughters died in 1993) first brought up the idea of selling the parcels in 2007, with the intention of keeping the land out of the hands of private developers. It didn’t take long for a variety of interest groups to jump on board. After expanded access, every trout caught on Tenderfoot Creek is a success.

After the Forest Service agreed that they would manage the land if the purchase went through, organizations like the Rocky Mountain Elk Foundation, Montana Fish, Wildlife & Parks, and the Tenderfoot Trust spearheaded an effort to make it happen. It wasn’t easy. Funding the estimated $10 million purchase price took nearly 10 years, and at one point a private landowner blocked an access road with a locked gate that took a court decision to reopen.

Not to be deterred, more than 30 sporting conservation groups helped move the project along by raising more than $500,000 of the total cost. The rest of the money came from the federal Land and Water Conservation Fund (LWCF), which uses royalties from offshore oil and gas leases to fund a variety of conservation projects across the country. From 2010 through 2015, nine different land acquisitions were purchased with LWCF funds, officially transferring the Tenderfoot Creek acreage into the public’s hands. The confluence of the Tenderfoot and the Smith River.

“The Tenderfoot really is an excellent and incredible example of how Montanans can work together to conserve the things that make Montana a wonderful place to live,” Governor Steve Bullock said when the purchase was completed.

Established in 1965, the LWCF appropriates up to $900 million nationally each year (it’s rarely that much, as Congress dictates how much is allocated) and has supported hundreds of projects in Montana, funding more than $240 million since 2005 alone. Not every project is as large or flashy as the Tenderfoot. Since its inception, the fund has helped build or renovate more than 40 public swimming pools throughout the state, and has supported small-town projects like the Highwood School community park renovation, Havre’s skateboard park, the Sunrise City Tennis Courts and Arboretum in Sidney, and the Ravalli County Golf Course in Hamilton. Almost half of Montana’s 330 fishing access sites have been bought or improved upon with LWCF funds.

The LWCF has been instrumental in creating large swaths of public land similar to the Tenderfoot over the years, including providing more than $30 million for the Montana Legacy Project, 310,000 acres in Western Montana purchased from the Plum Creek Timber Company for a total price tag of $490 million. The fund also helped preserve 12,000 acres along the Rocky Mountain Front through conservation easements, and more than 2,000 acres on Missoula’s Mount Sentinel and Mount Jumbo.

Looking west from atop the divide into the Tenderfoot Creek drainage gives a sprawling view of Smith River country.

Although it sounds like the LWCF is a panacea for preserving Montana’s public lands, government financing for the program has been in jeopardy many times over the years, most recently in 2015 when funding nearly was cut completely. At the last minute, Congress voted to reauthorize the LWCF but only through 2018, when it’s set to expire again. For 2017 and 2018, $400 million is appropriated to the fund, but its future is in the hands of the lawmakers.

As for the Tenderfoot, the LWCF made it possible to realize the Bair family’s dreams of preserving the land for the public and for future generations of Montanans. They saw the value in the hunting, angling, and recreational opportunities that the land presents, and had the vision and patience to see it through. Luckily, everyone else did, too.