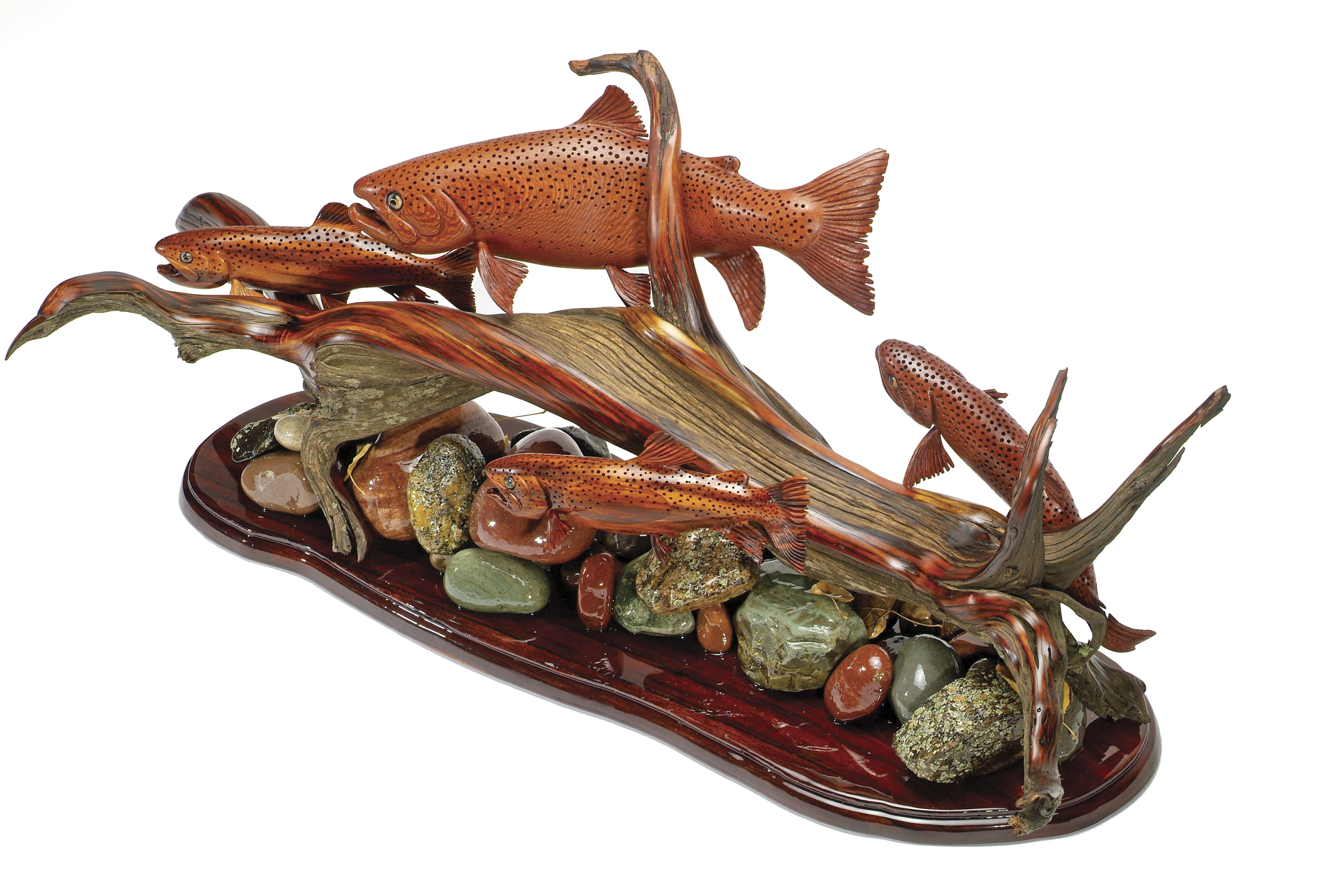 I WANT TO BECOME THE BEST AT MY ART,” says Thomas Milo Dean, of Milo Creek Carvings, as he peers over a 10-foot by 5-foot sculpture made of African bubinga, Oregon manzanita, and Montana juniper woods. Tipped at 30 degrees, the grand hand-carved piece eventually will make a whole river environment with 15 to 20 fish, frogs, cattails and dragonflies.

The monumental project — Dean’s “signature piece,” in the works for over a year — will soon be permanently displayed at Big R Supply in Great Falls, Montana. As CEO Wayne Wike relates, after seeing some of Dean’s work, “it is a great fit for what the fly fishing shop needed as part of our outdoor story.”

Dean aims to bring the outdoors in for a growing audience that appreciates the remarkable, real-life beauty of his carvings made from exotic woods. Hovering intently over other designs in his Great Falls studio/garage, Dean takes pride and ownership in an emerging art career that has eclipsed his years of working in pharmaceutical and orthopedic sales.

As he works, he launches into his story of a passion that subliminally yearned within him for years.

When he quit working for a major pharmaceutical company, “it was the scariest thing I had ever done,” he recalls. No paycheck, a wife and a family to support. Then, his sister from Seattle, sent him an old dremel tool. He got out a piece of pine and carved out a prototype of a paddlefish, and other small projects. He tried to sell the pieces, but wasn’t making any money. He went back to work 24/7 for an orthopedic product manufacturer.

When he had time, he kept carving.

A friend saw some of his fish carvings and encouraged him to enter a Christmas art show. She wanted 20 of them, but all he could make was one, which he sold for $60.

“I still have the three $20 bills,” he says with characteristic candor and a chuckle.

That was the kicker. He thought: “ ‘Wow’ if I could sell one, I can sell others.”

Other people started to notice his talent, too. Jan Robitaille, who bought that first piece as a Christmas gift says, “There’s something remarkable about his work that immediately drew me in — the feel, the look, the beauty of it. Our son-in-law loved the piece and it is a treasure for our family to have. I just hope that one day I’ll own something of his.”

Soon, Dean was working in the garage for hours on end. His wife Patti Jo would have to rescue him for dinner. He would be back carving by 6 a.m. the next morning.

Dean had a feeling in his soul that he could be successful. He believed in himself, knew his genre, and had hundreds of ideas. Although he was met with skepticism from his father, a retired pediatric dentist and artist himself, Dean pursued his personal vision.

“There is one thing in each and every one of us, a gift in life, and if it is presented at the right time, we can do it,” Dean asserts.

For this artist, that time is now. At the age of 45 he pursues his art career in earnest.

“I knew that Dean was born with a special talent,” said art collector, Mike Goss, who prominently displays a Dean sculpture of a brown trout going after a dragonfly in the reeds, titled Last Call.

“Through his younger years, he was fishing, hunting, enjoying other things. Now, he has taken his talent into his hands and is sculpting so we all can enjoy it. Until you share your talent, you don’t understand the impact you have on people. His talent is not something he picked up, but something he was born with,” Goss says.

Dean has been serious about his art since March 2008 when he exhibited pieces in a dealer’s room at the C.M. Russell Art Auction. Since that entrée, he has participated in the esteemed annual art show and gained success each year. Additionally, his work has been recognized by numerous Montana art dealers; Dean’s works are represented by Mountain Trails gallery in Jackson Hole, Wyoming, The Painted Pony in Big Sky and Hole in the Wall Gallery in Ennis.

Although Dean has no formal art training, he likes to think that his art is continually evolving from his understanding of the anatomy of his subjects. For the lanky, friendly, blue-eyed Dean, there are discoveries to be made in life, often underscored by its experiences. He speaks confidently about his work and the vivacity of his imagination .

Growing up in Great Falls, he learned to fly fish with a bamboo rod that his grandfather Milo had given him. The family had a cabin on the Smith River and as a young boy Dean recalls his grandfather’s stories about life and the outdoors. Milo Creek Carving is a tribute to that “wonderful, decent, honest man, who always had time for me,” he says.

Pulling out one of his first fish silhouettes, a flat-sided swimmer, Dean brandishes the framework of his early efforts.

He explains that his work is subtractive art. He starts backwards. Like a puzzle, he pieces the elements together. The result is both delicate and powerful sculpture, intricately portrayed in a dragonfly wing or the curved body of a fish.

Dean immerses himself in each original project. If he makes a fish, he first decides on the size, and the shape. Then, he finds a wood that is just right for the characterization. He draws the outline of the fish. He cuts the fish out from a big block of dense, strong, exotic wood: tigerwood, African mahogany, koa, bubinga, jatoba, zebrawood, Peruvian rosewood. He works with the natural beauty of the material. There is no painting, nor are fillers applied.

Aveling describes Dean as a “magnificent artist” who captures the beauty of fish. Dean’s fish carving, Brown on the Smith River, sits proudly on Aveling’s desk in Tallahassee, Florida, a reminder of his sporting travels to Montana.

A fly fisherman for 40 years, Dean draws the viewer into an underwater scene that may include water weeds, insects and aquatic animals. He adds Montana juniper where appropriate, having collected the twisted wood from eastern Montana.

In his work, he tries to render that one “moment in time,” capturing the “really big one” that swims in an angler’s memory. Dean’s work punctuates those memories on the water and indulges vivid daydreaming.

Kent Klewein of Reel Job Fishing in Georgia, casts numerous nods to Dean’s work. Klewein uses a picture of one of Dean’s carved fish in his blog that touts his guiding business. When clients want a replica mount of their fish he sends them to Milo Creek Carvings. “Dean is the only guy that does one-of-a-kind pieces out of exotic wood,” said Klewein.

This year, Dean was nominated for the Montana Circle of American Masters, an honor given by the Montana Arts Council, which denotes his significant cultural and artistic stature on both a state and national level.

Ever evolving, Dean refers to his inner voice that says you’ve never reached your pinnacle. Mention his inspiration, and he always comes back to his family.

“I really do this for Patti Jo and the kids, and I aim to be the best,” he concludes.

Left: A White-tipped Australian tree frog waits to be carved out of Koa wood from Hawaii and then will be placed upon a hand-carved branch as a stand alone piece. • Center: Sculptor Tom Dean provides detail to the mouth area of a rainbow trout. The trout is carved out of tigerwood from southern Brazil. • Right: Dean starts the carving process on a cut-out piece of Koa wood. This 5.5-inch trout will be included into a larger sculpture as food for a larger trout. 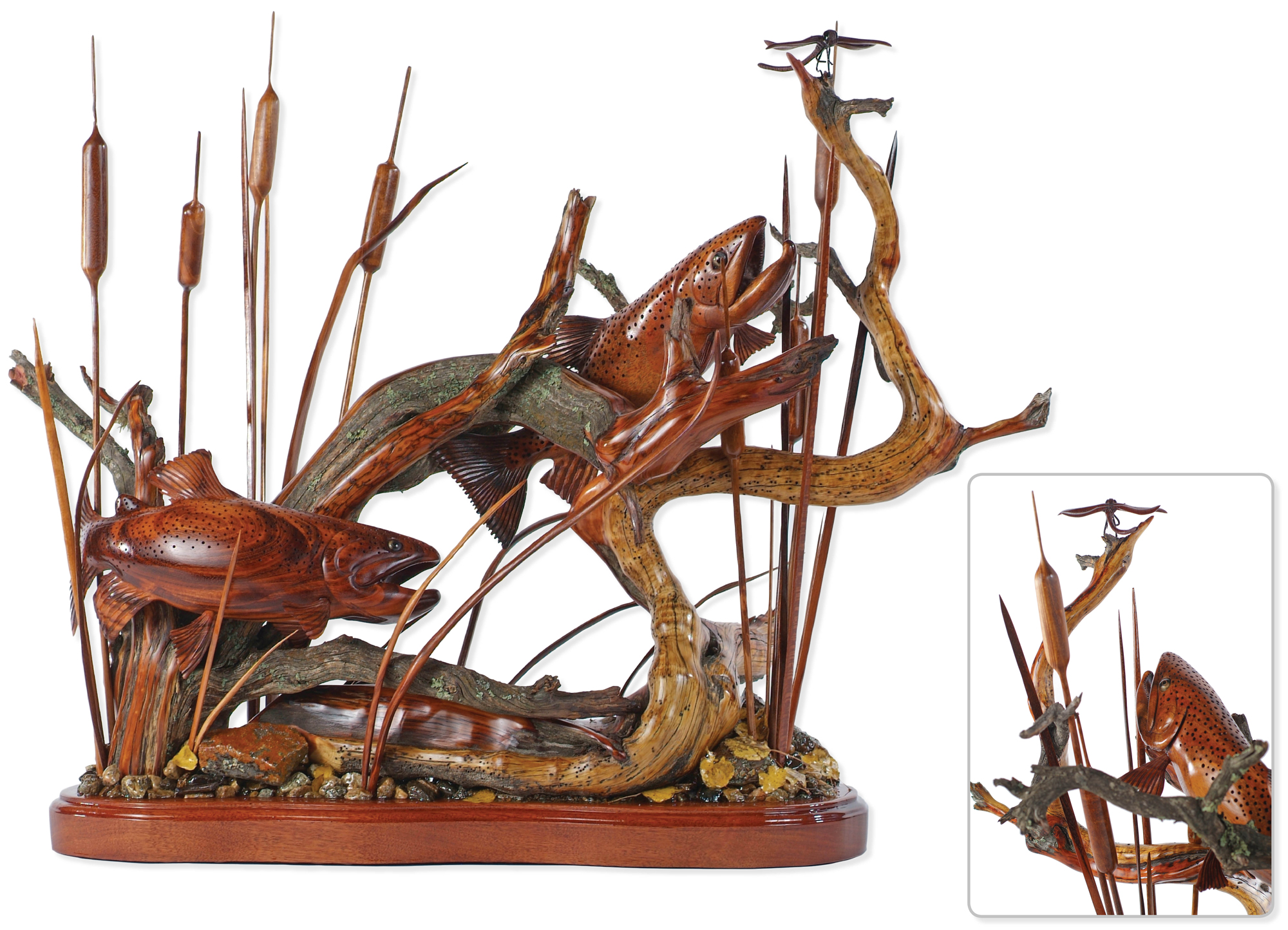 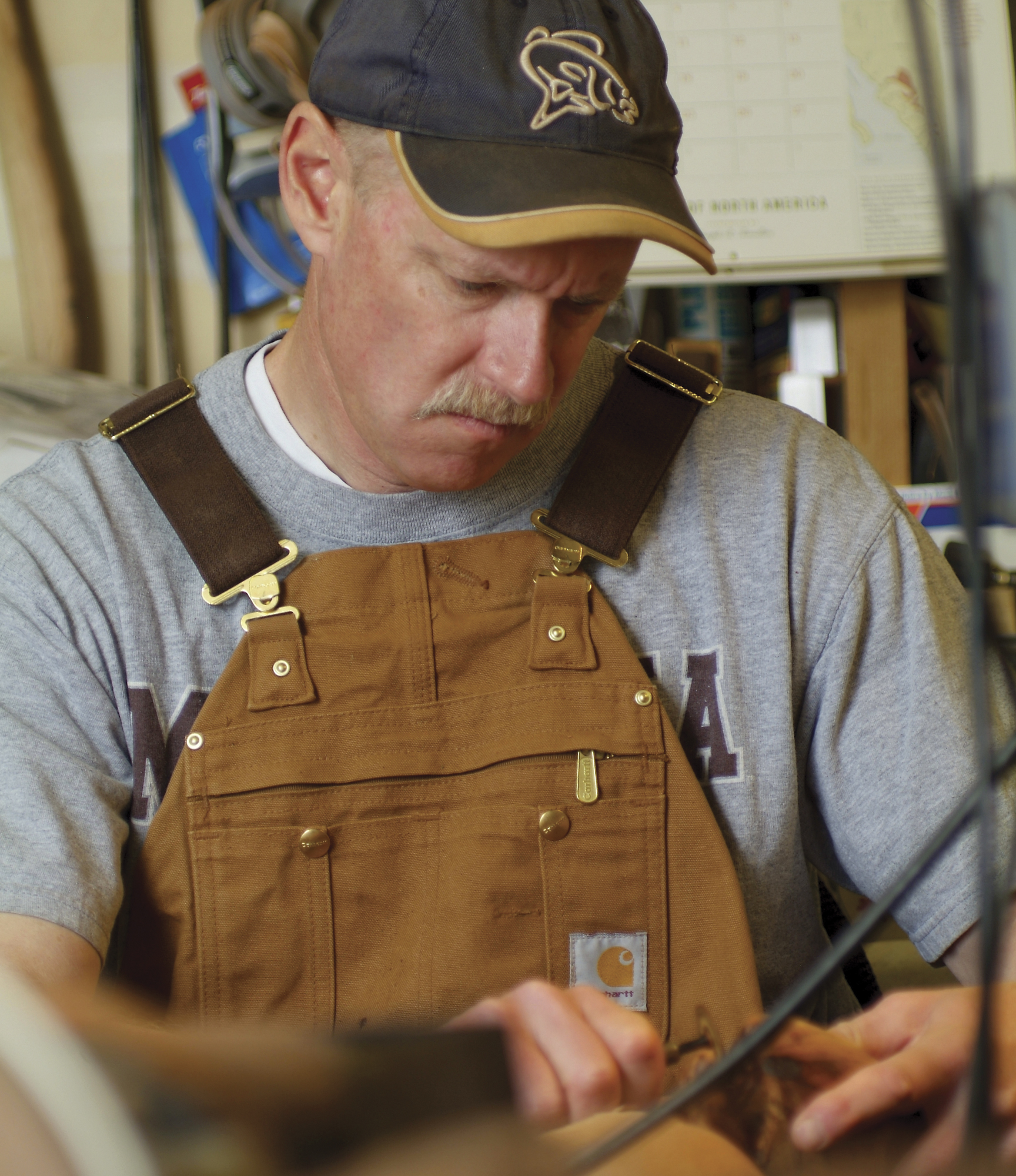 Artist Tom Dean carves a rainbow trout our of Hawaiian koa wood in his studio. 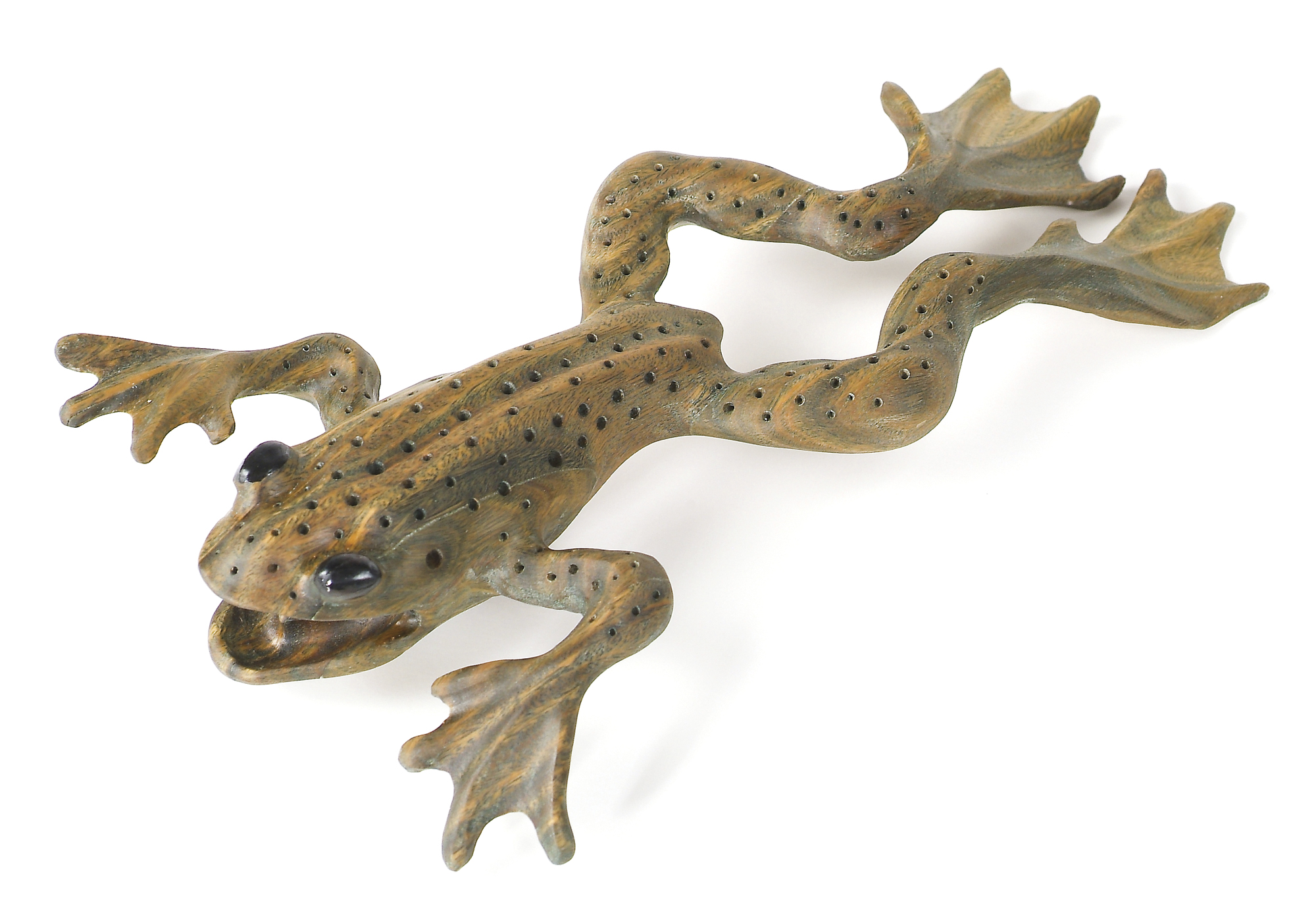 “Leaping Frog” is carved out of a single piece of lignum vitae from Central America. 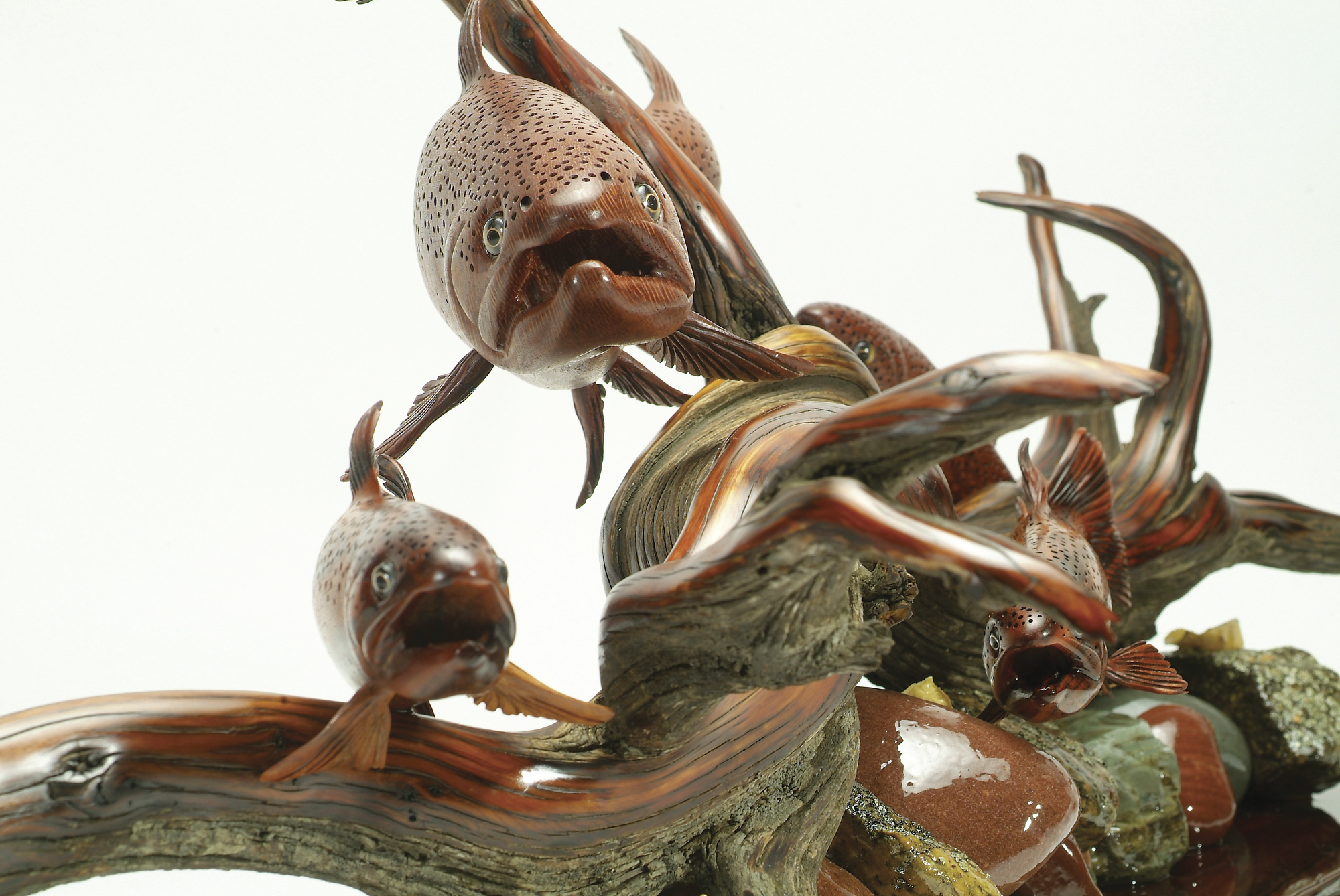 “Brookies on the Hunt” (detail) An oncoming look of brookies suspended in time.