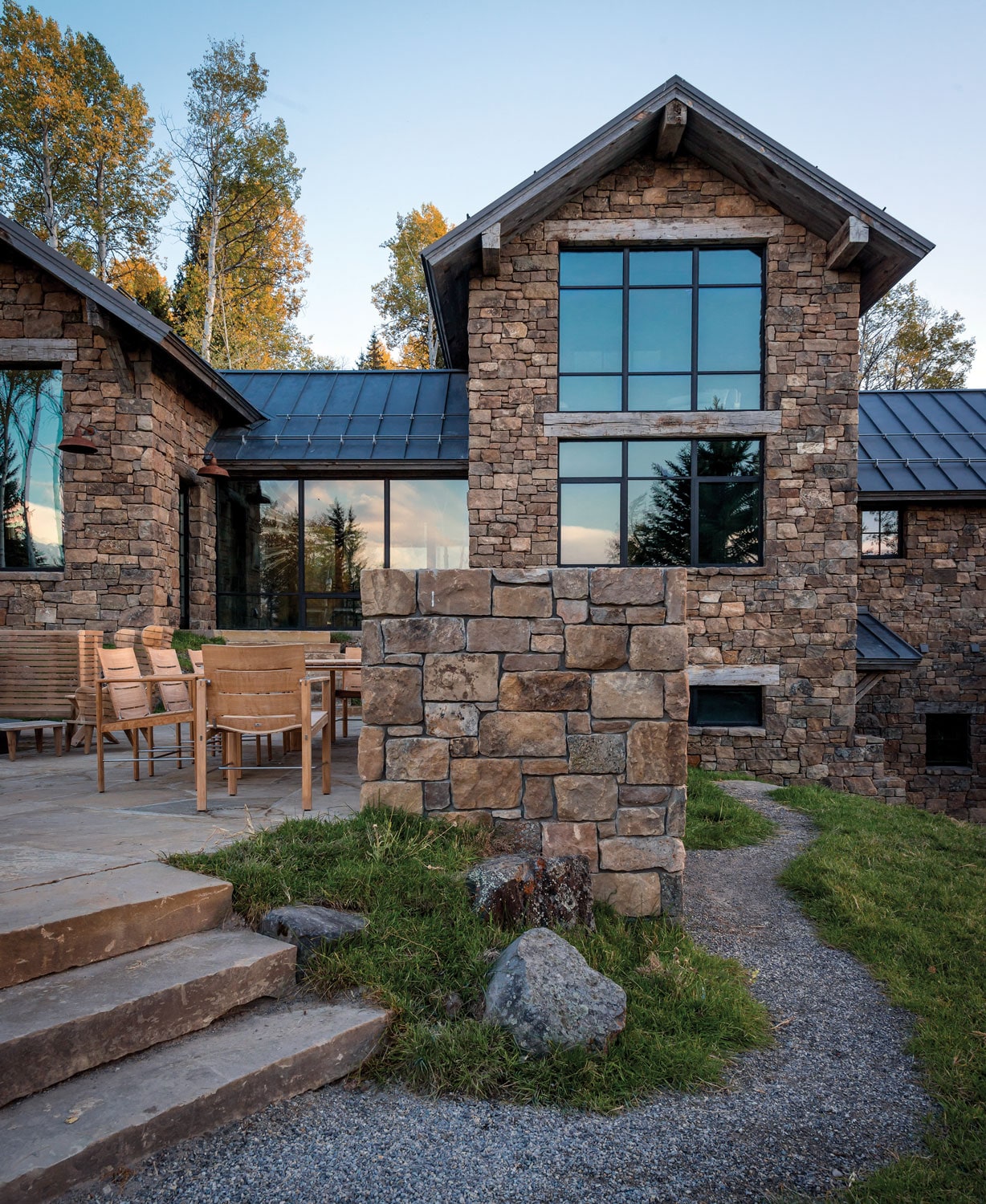 15 Apr Everything Old is New Again

A home inspired by centuries-old stone cottages was at the leading edge of the cozy-contemporary aesthetic that now dominates Jackson Hole, Wyoming’s architecture and design scene 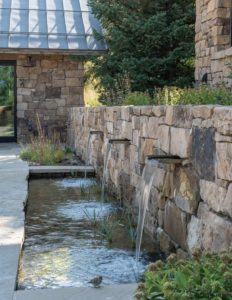 The idea wasn’t to build a trend-setting house. It was 2006, and log homes were still king in Jackson Hole, Wyoming. But the couple who owned a 6-acre hillside property in a private, wildlife-rich, low-density development between Jackson and Wilson weren’t interested in building a log home. Living in London with their two young sons at the time, they were nervous about building any type of home halfway around the world. “Getting from London to Jackson was not easy,” one of the homeowners says. “But we knew we’d be moving back to the States eventually, so we began planning.”

The first step — hiring an architect — was easy. “Paul was so interested in and excited by the property,” the homeowner says, referring to Paul Bertelli, design principal at JLF Architects, based in Bozeman, Montana, Park City, Utah, and Jackson Hole. “And we got the feeling that he would listen to us, give us his views, and that the end result would be a collaboration.” Also, the couple liked the look and feel of their stone house in the Cotswolds region of England, and JLF had expertise in working with stone. 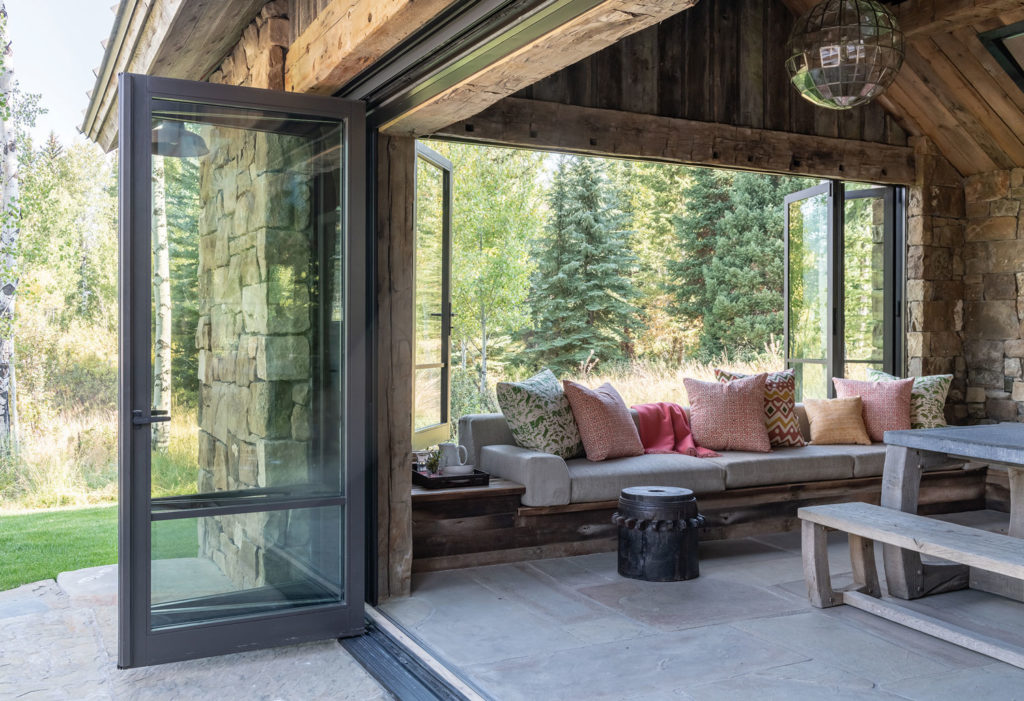 The original 6,000-square-foot home was completed in 2012, designed by JLF Architects. In 2017, JLF designed a 2,000-square-foot guest house that’s connected to the main house via a tunnel. The addition also included a terrace with an indoor/outdoor living space on the west side of the main home. 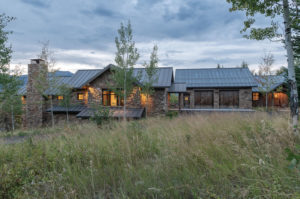 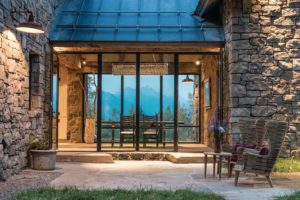 A dining are is surrounded by glass for the ultimate views.

While the couple wanted a significant amount of stone in their Jackson Hole home, they didn’t want to recreate a Cotswolds-style cottage in the Rocky Mountains. If they had, it’s likely Bertelli and JLF would have said, “Thanks, but no thanks.” Bertelli says, “We’re regionalists, and it’s important to us that our homes fit into the context of where they are.” The couple talked to Bertelli and JLF partner Travis Growney early on about wanting the feel and strength of stone, the home to look like it had been there forever and to fit into the landscape, and, finally, for it be a combination of old and modern. 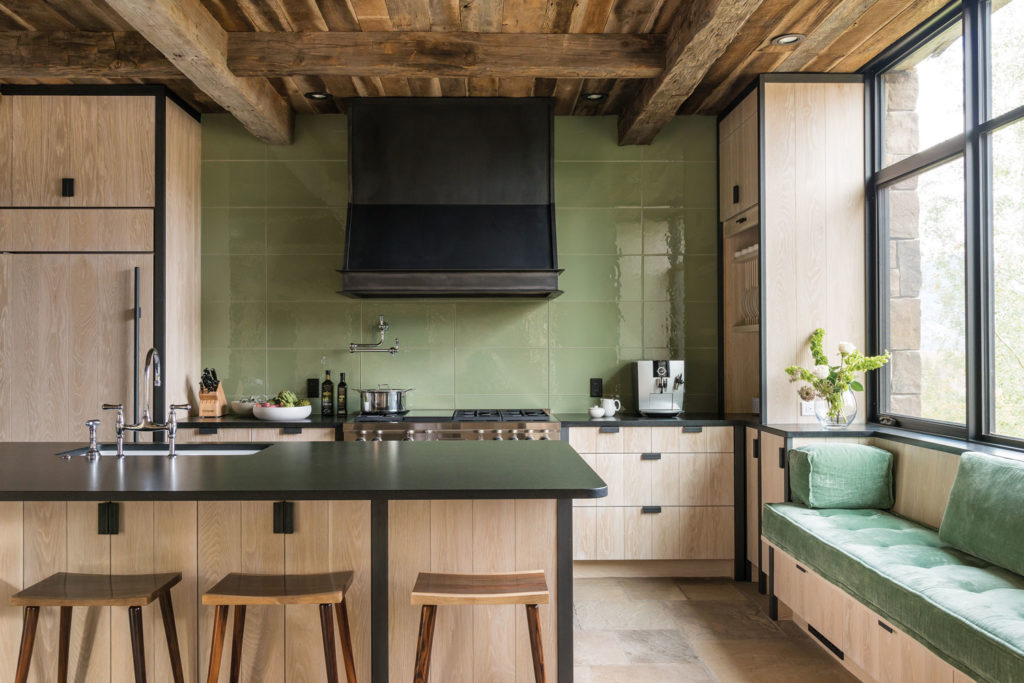 The homeowners picked the tiles behind the kitchen counter to match the sagebrush just outside the window. Also outside the kitchen window are views of Tetons. “We were very interested in views,” the homeowner says. “The whole house – whether the master bedroom, the dining room or the kitchen – was built around views of the Grand (Teton). 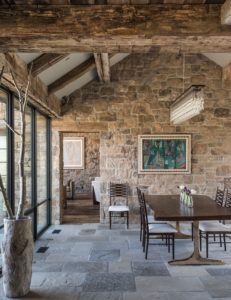 “It’s easy to work on a project when you have such amazing bones,” says Jackson Hole-based interior designer and gallerist Tayloe Piggott. “With JLF and this design, so much of my job was respecting and honoring the design and craftsmanship.” 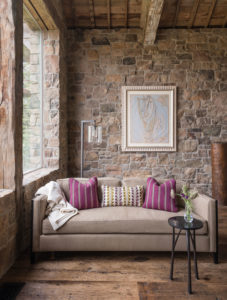 Interior designer Tayloe Piggott says that the homeowners described fabrics and the feeling they wanted a space to have. She blended that with art and furniture. “There are a lot of pieces in the house that have to do with their travels,” she says. “I brought in furniture that was sculptural, but also cozy. We talked about the house being a relaxing sanctuary.”

That last ask is the root of what puts this house in the vanguard of Jackson Hole contemporary design. “[The homeowners] initially talking about stone and then also being comfortable with other ideas opened a door for us,” Bertelli says. “We took the opportunity to open that door and walk through it.”

JLF Architects has a history of opening doors. The firm was founded in Bozeman in 1979 — 2019 marks its 40th anniversary. “Our earliest projects used 100-year-old homestead buildings [that had collapsed] to create new spaces,” Bertelli says. “Back then, no one was using reclaimed timbers.” Today, the firm continues to use reclaimed timbers and logs, but, when clients are up for it, mixes these with more contemporary materials such as glass and steel. The owners of this home were among the first who were open to exploring a contemporary materials palette, and eventually they even brought the idea of a glass staircase to Bertelli and Growney. “I remember them asking, ‘Can we do something really crazy?’” Bertelli says. “We had never built a glass staircase before, but saw the potential and were drawn to the challenge.” 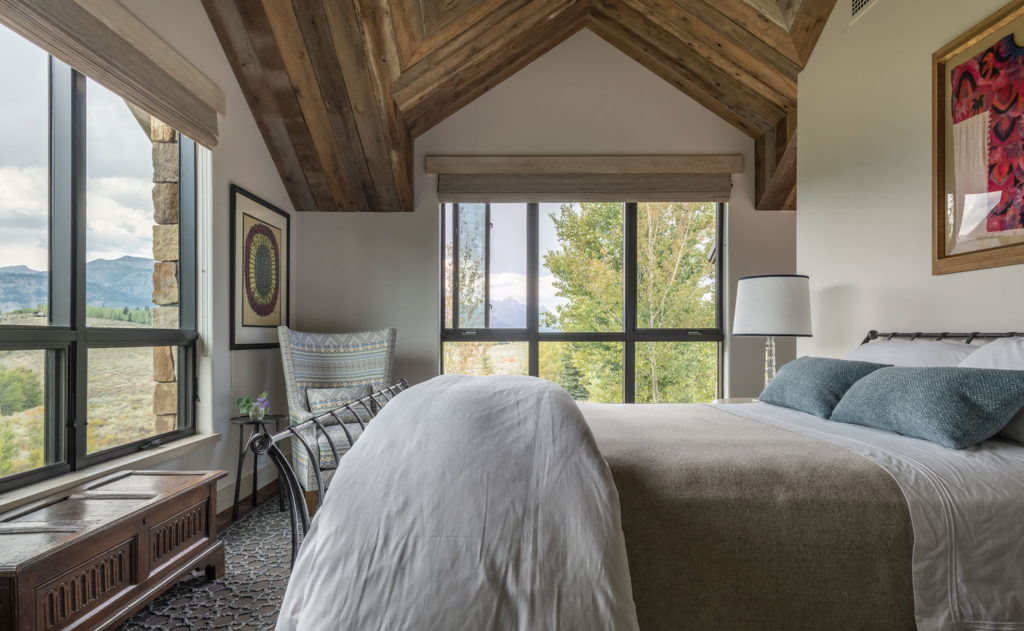 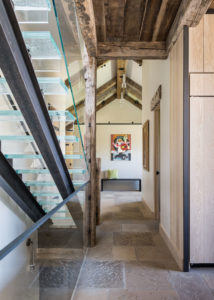 This was the first glass staircase JLF designed for clients, and it served as one of the most significant design moves in the home. 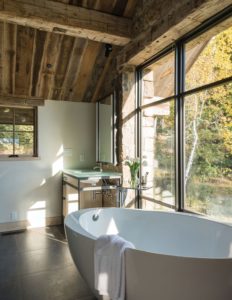 While the main house was built around the property’s stunning views of the Tetons, JLF also designed more intimate vignettes, like this wall of windows next to the deep soaking tub in the master bathroom.

The glass staircase ended up being one of main updates in the home: Beneath a set of skylights, it spans three stories and “allows light in all the way down to the lower level,” Bertelli says. “It lights the home like a lantern.” Bertelli and Growney also designed glass furniture and cabinetry with steel details for the office and bathrooms.

The couple worked with Jackson Hole-based designer and gallerist Tayloe Piggott on the original 6,000-square-foot home that was completed in 2012. About 240 tons of fieldstone were used on the exterior, interior walls, and floors. The wide-plank floor in the living room was formerly the floor of a threshing barn. “We loved it immediately,” the homeowner says. “It is so peaceful and relaxing and all the spaces are so functional. We use every part of the house.” 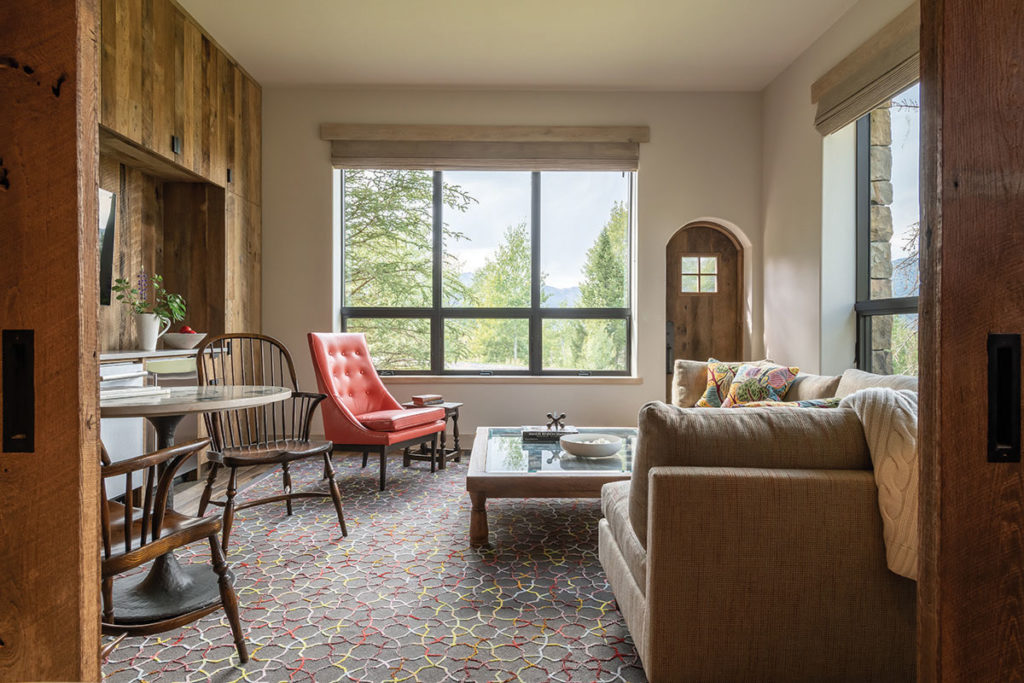 “[The homeowners] really pushed my boundaries using colors,” Piggott says. “It’s really important to me that I align with my clients, but I never want us to totally see eye-to-eye. I like the idea of each of
us challenging the other.” 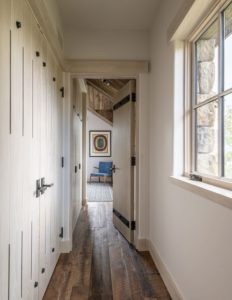 The family used the house so much that it was only several years before they needed more space. “We had planned for an addition from day one and included a guesthouse in the original master plan,” Bertelli says. “But, after living in the house [the family] realized that not only did they need more bedrooms, but more recreational space as well.”

The 2,000-square-foot guesthouse (which was completed in 2017 in a style matching the original home), looks like a separate component, but it’s part of the main house, attached via an underground tunnel. “We are always looking to push ourselves and our designs and to do unique things,” Bertelli says. “This house helped us explore so many things — the contrasts between old and new and modern and traditional, the use of different materials, a different sense of scale. And because we have this house to show to new clients, some are now willing to let us stretch the envelope on the design of their homes even further, which allows us to continue to evolve and challenge ourselves.” 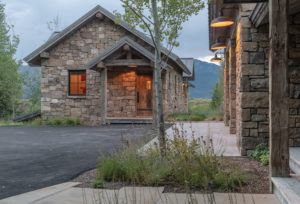 The guest house appears to be separate from the main house, but it’s connected by an underground tunnel. 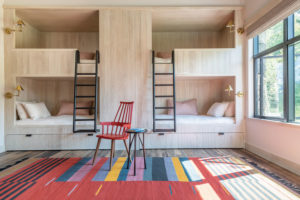 There are two bedrooms upstairs, including one with built-in bunks. “We wanted a place where all these people could pile in on a skiing or fishing vacation,” the homeowner says.