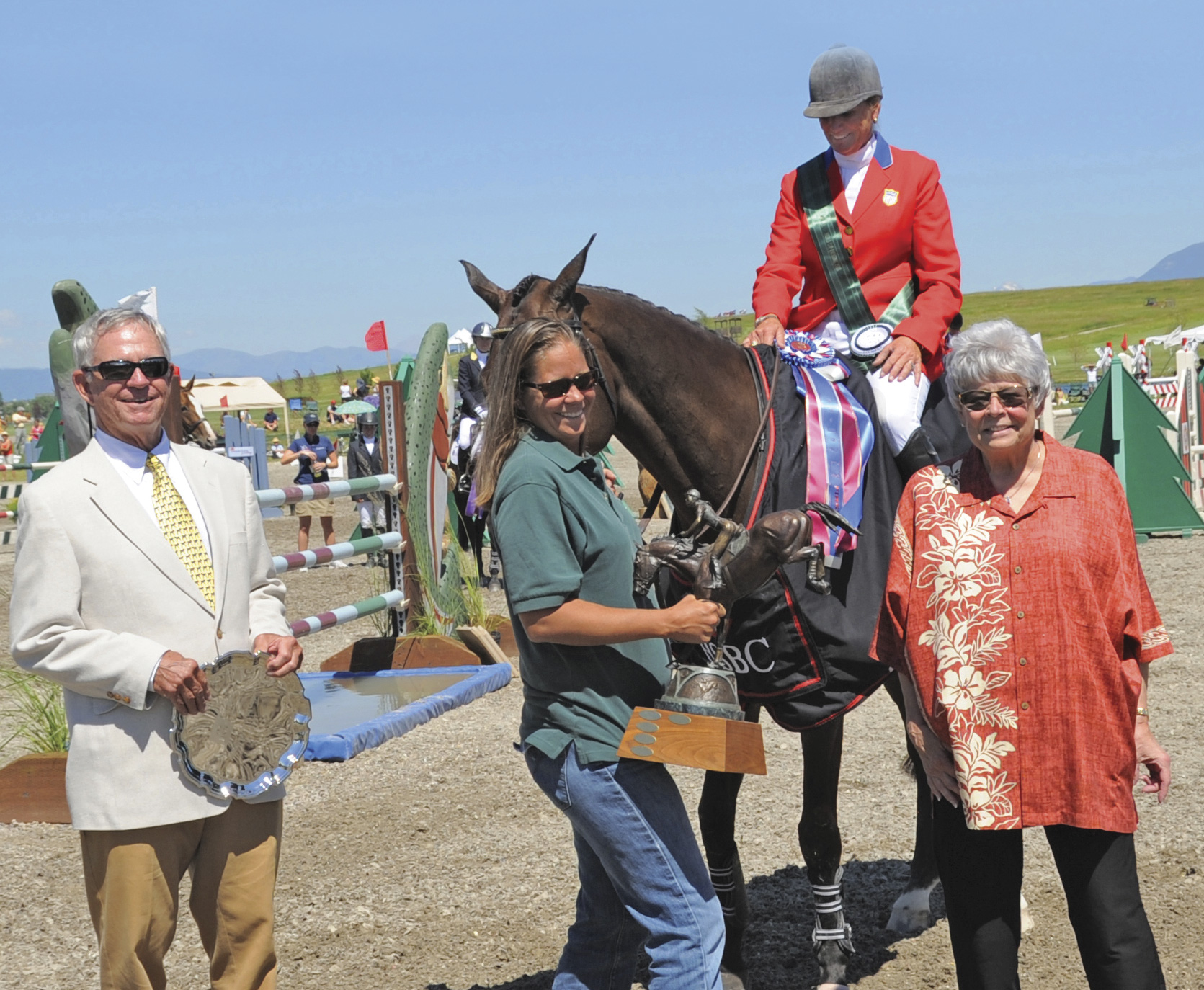 Etched out of the rolling wheat and barley foothills of the Salish Mountains west of Kalispell is Rebecca Farm — a 640-acre equestrian complex that became a veritable city in the Flathead Valley last July. Or at least a good-sized Montana town. The 8th annual Event at Rebecca Farm, a four-day “eventing” competition, or equestrian triathlon, drew almost 20,000 visitors, more than 200 volunteers, 503 horses — 18 of which were flown in from the East Coast — and a record-setting 513 entries. Thirty-one states were represented as a host of riders competed in the 2010 HSBC Fédération Equestre Internationale World Cup™, of which Rebecca Farm was one of only 11 international stops on the circuit.

But eventing is no Friday night rodeo. Visible from miles away, massive white tents resembling the flying-buttressed Denver airport staggered the hillsides, with nearby cranes for video filmers and golf carts buzzing everywhere. More than 5,000 silk flowers decorated cross-country obstacles that the competitors jumped, like the three 12-foot long wooden trout, or the 48-inch thick moose, or the dragon rising from a shallow, man-made pond. Olympians such as native Australian Philip Dutton and 10-time U.S. Female Equestrian Athlete of the Year, Karen O’Connor, rode straight-backed in their tall, genteel boots, starched-white pants, double-breasted long-tailed coats and stilted top hats. Each prance of a horse kicked up an air of aristocracy.

For Lakeside resident and Flathead High School junior Briana Patyk, this was a chance to watch and compete with the best riders in North America in her own back yard.

“To have an event this big and to watch people at such high levels compete is so much fun,” said Patyk, perched atop the central viewing hill as one after another of the three-star, or top division, riders zipped around the cross-country course beneath her, splashing through the ponds and leaping obstacles. “It’s inspirational. I love watching the three-star riders because that’s my dream with riding. It’s what I want to accomplish. And what better place to ride than here at Rebecca? The facilities are incredible, they take such great care of the property, and you have great views of the mountains. It’s big sky Montana.”

The big hometown hero, however, was Jil Walton of Kalispell, who rode for the 1992 U.S. Olympic Team in Barcelona and now trains and teaches at Rebecca Farm. After each of Walton’s events, the applause echoed over the hills and across the ponds. “We have the very best people from the world helping with the event, but here we’re all a little more laid back and friendly,” said Walton as she sat in front of her trailer at the horse stall, the smell of hay, manure and leather thick in the air. “It’s the same level of quality as back East, but we’re a lot more fun to be around — Montana people.”

Eventing is composed of three events: dressage, commonly called “horse ballet,” cross-country, and show jumping. Dressage is subtly technical and designed to assess obedience and the harmony between horse and rider in a small, rectangular arena. The cross-country course at Rebecca Farm snaked over 300 acres and tested horse and rider as they leaped over obstacles and splashed through ponds. The final event of show jumping takes place in the same smaller arenas as dressage, but requires competitors to navigate and jump a tight course of decorative wooden bars set at varied heights, depending on difficulty.

Certainly the highlight for spectators, however, was watching the cross-country competitors leap through the “keyhole,” a 6-foot diameter circle cut out of a 10-foot tall wall of cedar boughs. On the other side, horse and rider landed in a shallow pond — all the while focusing on the next obstacle.

“The keyhole is always quite a spectacular thing because the horse and rider burst through,” said course designer and former Olympian Mark Phillips. “It also creates an element of uncertainty, which will make this a bit more difficult. If the horse is not quite certain enough or lands a little short through the keyhole, then it has to think how to solve the rest of the puzzle.”

For 25 years before Rebecca Farm, equestrian competitions had been held at Herron Park, south of Kalispell. But over time, the competition outgrew the grounds, and Jerome and Rebecca Broussard had long envisioned creating a top equestrian facility not only for the Northwest, but for the nation. After 16 years of eventing at Herron Park, it was time for a change of venue.

“Hosting our sixth World Cup event continues to define our presence on the world equestrian stage,” said Rebecca Broussard, organizer of The Event, who passed away from cancer last December at age 68. “While we enjoy helping riders in the West compete at the highest levels, we are especially excited about the riders from the East Coast who have made a special journey by flying to Montana this summer. It’s been a dream of the Rebecca Farm team to have these riders compete here and it marks a new high point for The Event.”

Roger Haller, President of National Grand Jury, echoed the significance of 2010’s event by pointing out, “that since 1962 in Pebble Beach, this is the very first time that the competitors from the East Coast have come out to an event in the West. It’s not just western Canada and the western U.S. — it’s all of North America that is coming here now. We’re hitting the cream of the crop for North American riders.” Alongside Haller were judges from England, Australia and New Zealand.

Once ranked the number one female rider in the world, Karen O’Connor certainly fits the “cream of the crop” bill. O’Connor won the team silver medal at the 1996 Atlanta Olympics, the team bronze at the 2000 Sydney Olympics, and was a member of the 2008 Olympic team in Beijing.

But what sold her about The Event was something entirely different than world fame. “There’s a lot of planning and a tremendous amount of volunteer support here,” said O’Connor, who travelled to Montana by airplane with her horses. “Although this is a world stage, you feel like it’s a community event. The Broussard family has gotten the community behind this, and we’re proud to be here.”

“This is one of the greatest venues I have seen,” agreed Olympian Philip Dutton, who also arrived on the airplane, bringing along three horses, all of whom he rode during the competition. “To find a facility like this in the middle of summer is unheard of. The Event is run in a really professional way and is really good for the horses.”

As the largest western eventing competition in almost five decades came to a close, O’Connor took top honors in the three-star division, and Dutton third.

“The next step,” said Dutton, “will be for the European riders to come here. It has endless possibilities for future events.”

Left: Winner of the 2010 Event at Rebecca Farm, Olympian Karen O’Connor and Mandiba had a clear run to claim the World Cup title. Show jumping examines precision, agility, and technique while jumping over high obstacles and turning when the rider commands it. • Center: Cross-country is designed to test endurance with horses running long distances at high rates of speed. It also tests courage, boldness, confidence, and stamina of both horse and rider. • Right: 2010 winner Olympian Karen O’Connor competes in dressage. Dressage is designed to test obedience and the harmony between horse and rider. Images courtesy Rebecca Farm 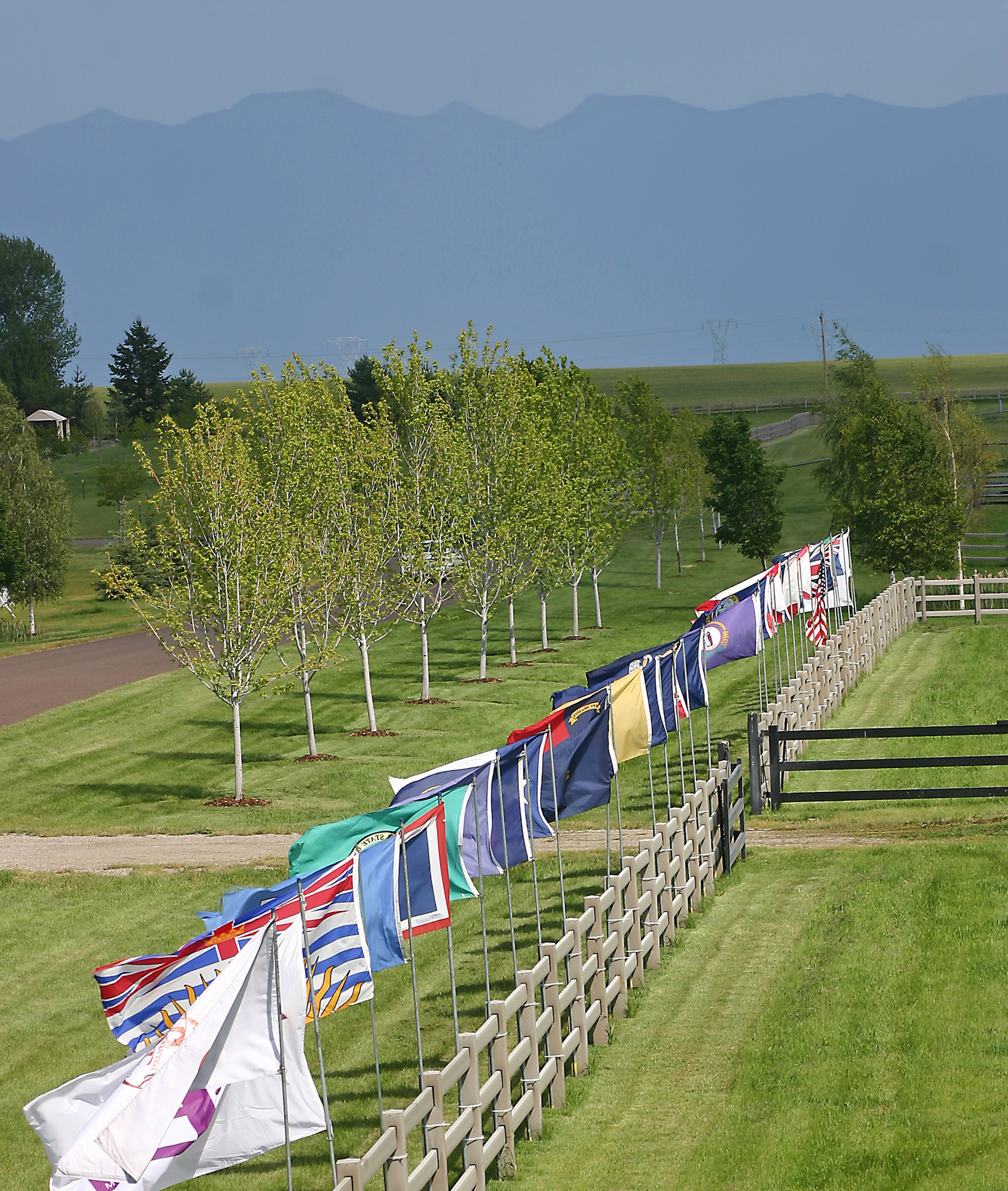 The flags that line the main drive of Rebecca Farm represent all of the states and countries that competitors, judges and invited guests hail from. Images courtesy Rebecca Farm