YOU CAN BARELY SEE Tim and Sandy Day’s home from the road. Even pulling into their curving driveway, you get only glimpses — a log support beam here, some stone or a glint of aged copper there.

It’s unexpected. I’ve never seen — or not seen — a 6,445-square foot combined home/guest house that hides itself so well. Walking up to the front door — low and wide and protected by copper-clad shed roofs that run the length of this side of the home, you still have little to give you a sense of scale. But then Tim Day opens the door and welcomes me in. Entering toward its middle, the home reveals its expanse —the main living area is open, halls stretch to the north and south, and, facing west, are the biggest windows I’ve ever seen in a private residence. Maybe the biggest windows I’ve ever seen anywhere.

“I want big glass,” Tim Day told architect Tom Ward as the two began talking about the home Day wanted for his property in Jackson Hole. Ward, a founding principal at Jackson-based Ward+Blake Architects came back to Day and wife Sandy with a sketch of a home whose western face was nearly all glass. But it wasn’t enough for the Days.

Ward came back to the Days with a design that had more and bigger windows than any of his previous designs and that required custom manufacturing. “That’s it,” Day said.

Nearly the entire western side of the home, which has unobstructed views of the southern end of the Tetons, is glass. Through the spotting scope in the living room, the Days can watch skiers all the way from Teton Pass to the Jackson Hole Mountain Resort. “Of course I thought, ‘We’re doing a glass house looking west,’” Ward says. He designed seven-foot overhangs, but, “you can’t control a western façade with a seven-foot overhang. You can’t control a western façade with any amount of overhang. The sun will eventually skip in and work you over.”

Ward set to minimizing how much the sun would “work over” the Days’ home. Ward says the summer sun is intense from 4 o’clock until 6 o’clock, but then the sun dips behind the mountains. “You get alpenglow at this house for four hours,” Ward says.

“We wanted to do a house that was very low in response to the site,” Ward says. The Days’ lot is in the oldest section of the John Dodge subdivision. “It is a flat area that had been completely cleared of trees. It was probably farmed at one point by John [Dodge],” Ward says. “It seemed disrespectful in some way to do a two-story house there.”

Area covenants allow for 7,500-square foot homes. “But this envisioned multi-story homes,” Day says. “The HOA had a heart attack when they saw the footprint of this one.” Ward adds, “They hated the home; it wasn’t like anything they’d seen before. It was heartbreaking for us because we believed in it — keeping the home long and low really was the best way to preserve the view shed of all the neighbors — and we thought it was a cool idea.” In the end, the subdivision’s covenants were so loose, they couldn’t deny the design.

Now that the home has been built and the landscaping has grown in, the neighbors see Ward and the Days were right. It is one of the most unobtrusive homes in the neighborhood. “We made the public façade low and private — there are some windows on the east but most of it is solid — but then opened it to the west,” Ward says.

The home wasn’t designed merely as a response to the site, but also the view sheds. “Standing on the site before anything was built, we had this great 180-degree panorama of the Wilson Faces and southern Tetons,” Ward says. “I used geological features along the range to define where the house went.”

The house, though long, is not straight. “It is a radius design,” Ward says. “Wherever you are in the home — each space — you’re centered on some feature of the range. Every room has its own focus.” Every room, at least the ones that have outside access to the west, also has its own terrace. “We wanted a lot of patio,” Day says.

The terraces use the same stone as the home’s interior floors. “The Days wanted to use lots of stone — it was evocative of a rustic environment,” Ward says. Ward found a single type of stone quarried two different ways. The fieldstone quarried rock makes up the floors and the terraces. Quarried as rubble, it’s used on the home’s interior walls. “This stone is a fairly active stone,” Ward says. “It has lots of color in it, which could be a noisy palette, but since it’s all the same type of stone, everything quieted down and it’s a beautifully rich, textural palette.”

“We wanted a contemporary home, but not something that was wildly contemporary,” Day says. “We wanted it to still look and feel like Jackson.” When the Days first began looking to buy in the valley, they looked at homes, not vacant land. “But we finally concluded there were no homes we liked that really suited us,” Tim Day says. “Then we began looking at property. We knew we wanted a lot with views. It still took some time to find a lot we liked.”

Day ended up finding — and buying — the John Dodge lot while on a trip here without Sandy. “As soon as I saw it, I said, ‘I’ll take it,’” Day says. “I called Sandy and told her, ‘I just bought our lot.’” Sandy ended up loving the spot as much as Tim.

While Ward + Blake is now an established architecture firm in the valley — and in the state: in 2011, the firm was named Firm of the Year by AIA Wyoming — when the Days came to them in the late 1990s, Ward and Mitch Blake had just partnered up and gone out on their own. “I built my own business and like to work with entrepreneurs,” Day says. “I saw earlier projects they had done while working for other firms. I was confident they could do what we wanted.”

The Days hired builder Barry Cox of Cox Construction for similar reasons. “Barry had started his own company too,” Day says. “I admire that.”

When talking with both firms, the Days stressed they wanted their home to be an icon. “I wanted this home to be the best house Tom had ever designed and that Barry had ever built,” Tim Day says. “I told them both that I wanted this to be the house that showed up in their brochures and that would serve as a reference point for how good they could do it. And now here we are, more than 10 years after the home was designed and built. It’s still getting recognition and we’re still enjoying all the time we spend in it.” 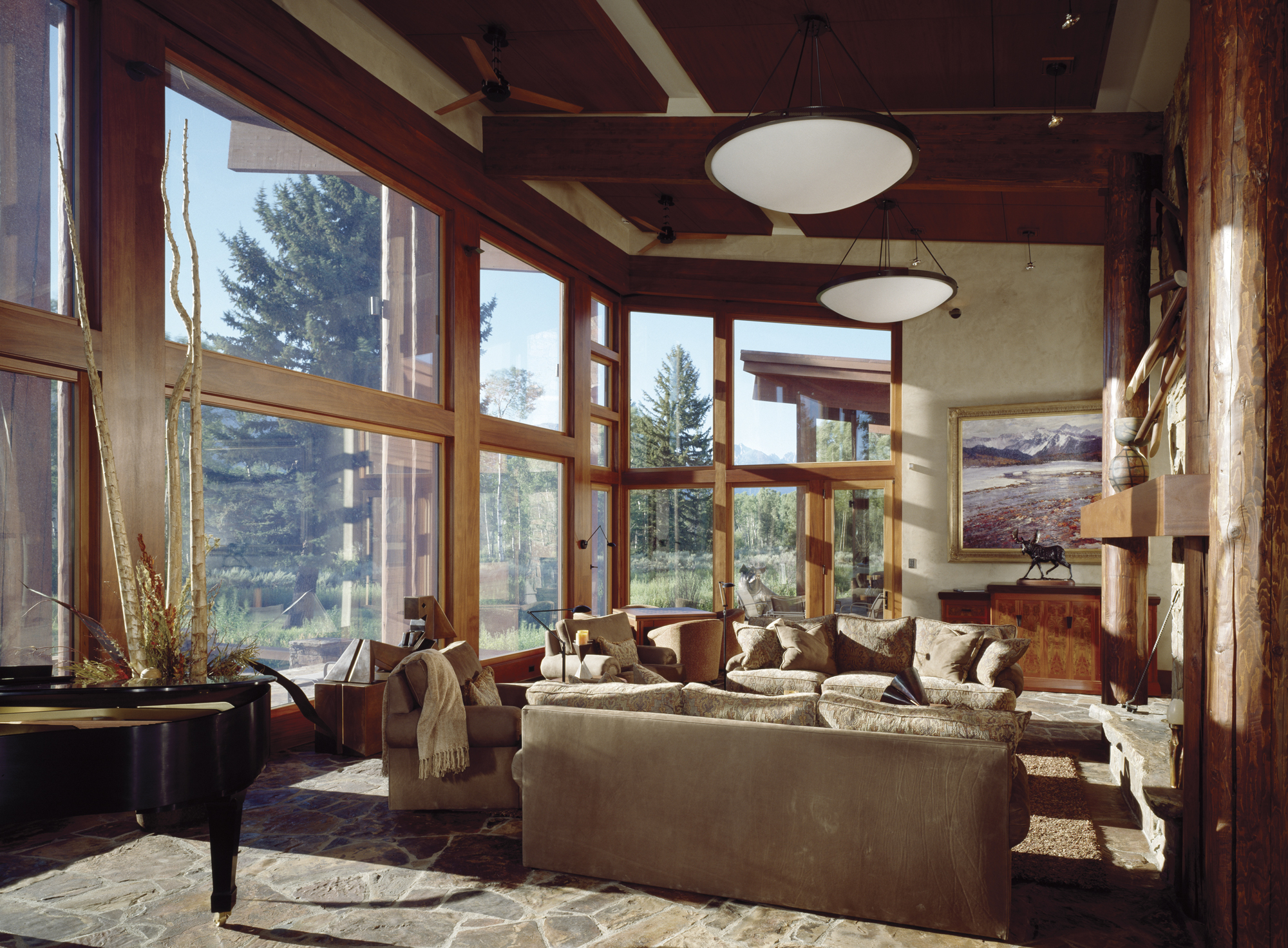 “We wanted the home to be contemporary but also fit in Jackson,” Tim Day says. 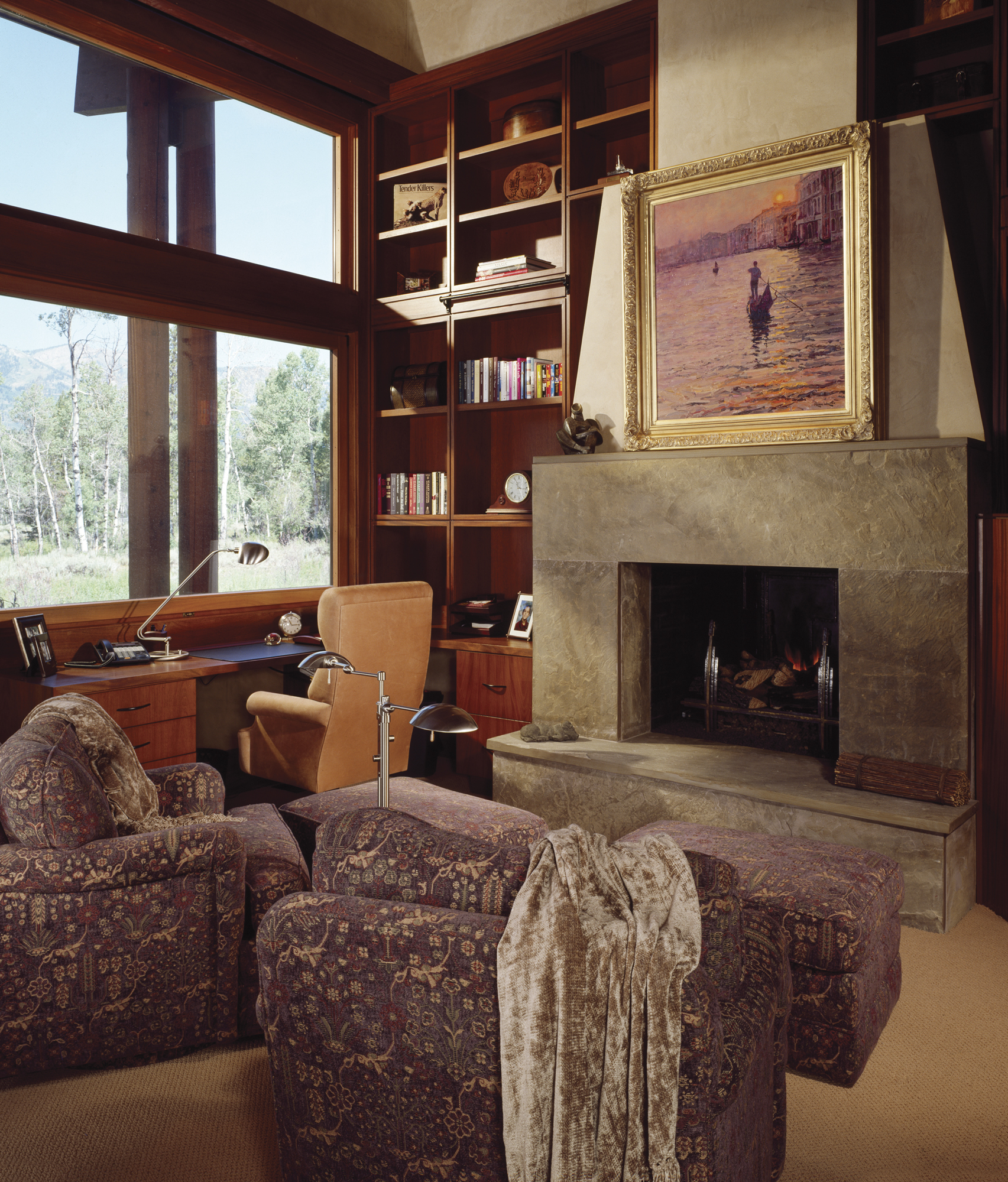 Intimate areas and subtle tones are designed to make this home relaxing and comfortable. 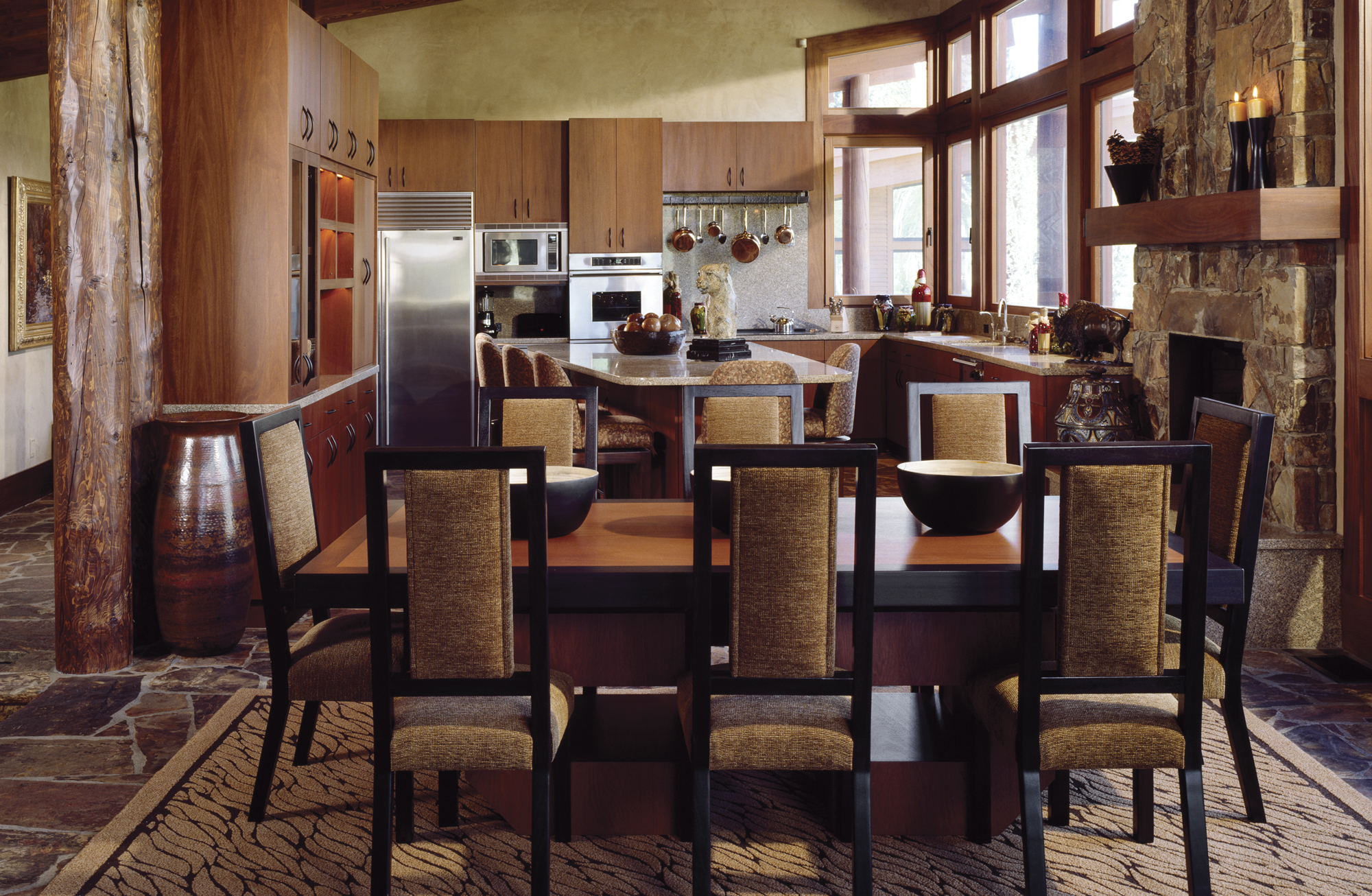 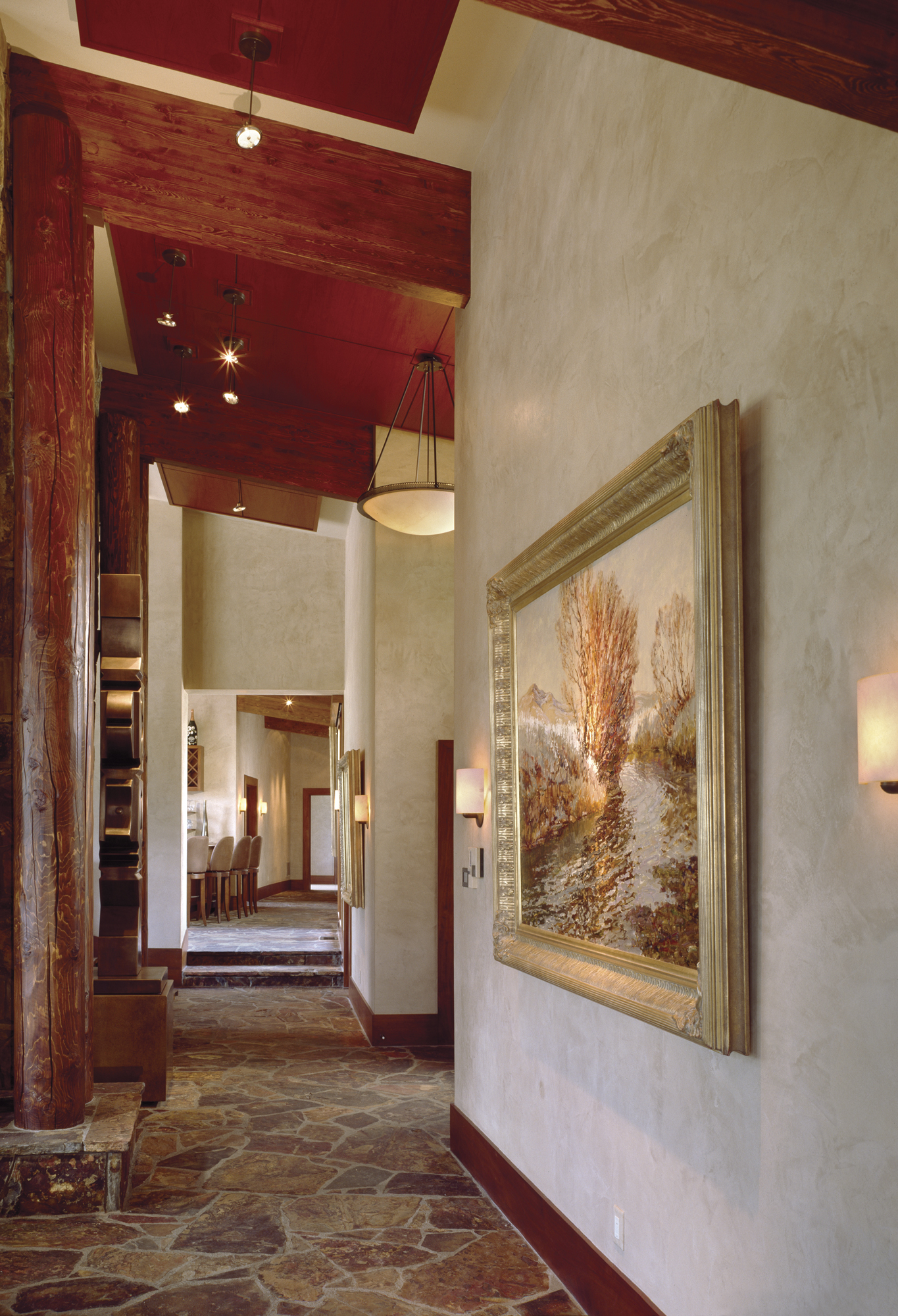 The Days are among the biggest collectors of English-born artist Alan Wolton. Ten of his pieces hang in their Jackson Hole home. 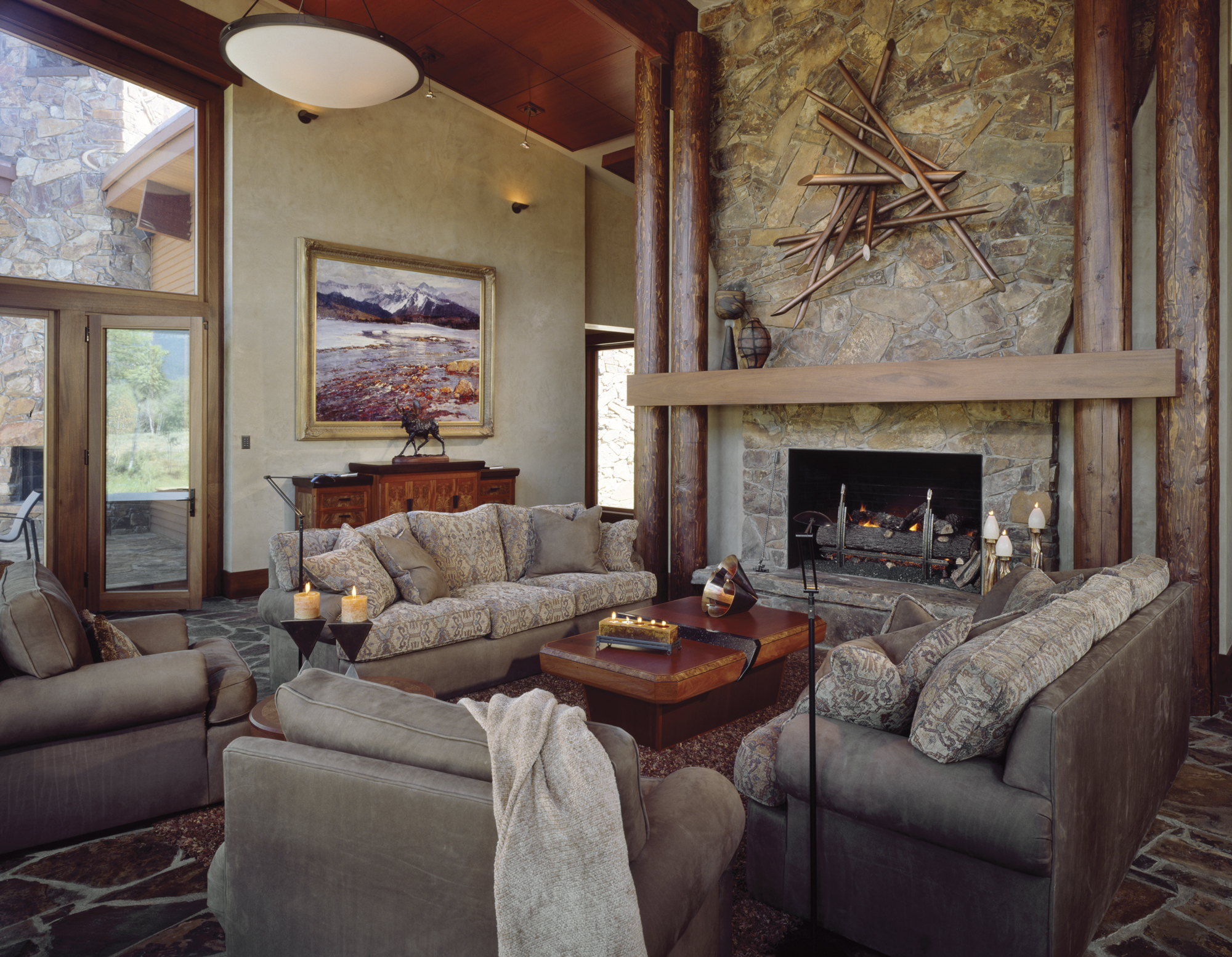 Because the stone used in the home has so much natural color, it was decided to use the same stone — but quarried in two different ways — throughout rather than mixing in different kinds of stone. 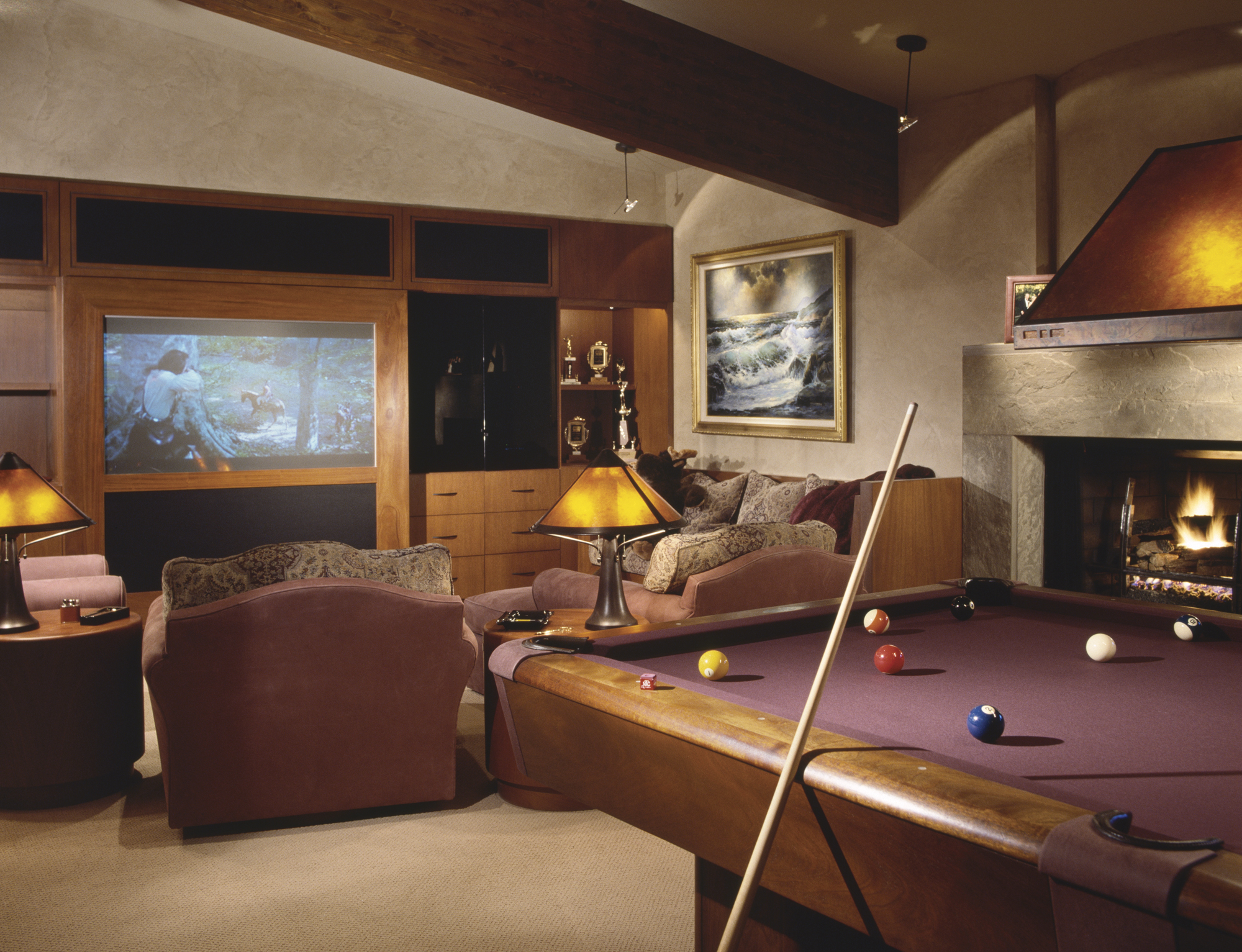 With only one-bedroom in the main residence, there is plenty of room for a media/pool room, as well as, a library and also an exercise room.