On August 3, 2011, a federal court of appeals ruled on a case that challenged winter feeding of elk and bison on the National Elk Refuge (NER) in Jackson Hole, Wyo. For the first time, a court decision asserted that the refuge’s century-old feeding program was contrary to its mission under the National Wildlife Refuge System Improvement Act of 1997. That legislation provides guidance for management of the 553 national wildlife refuges that span more than 150 million acres across all 50 states. However, it admonished the U.S. Fish and Wildlife Service, which administers the refuge system, “… the whole point of a National Elk Refuge is to provide a sanctuary in which populations of healthy, reproducing elk can be sustained. The Refuge can hardly provide such a sanctuary if, every winter, elk and bison are drawn by the siren song of human-provided food to what becomes, through the act of gathering, a miasmic zone of life-threatening diseases.” The court’s decision stopped short of specifying a date certain when winter feeding must end.

What calls into question the “gathering” and feeding of animals is that the Improvement Act charges all refuges “to ensure that the biological integrity, diversity, and environmental health of the [Refuge] System are maintained.” This requirement pertains to both the animals and the habitats that sustain them on refuges. In the case of the NER, not only is the health of the elk themselves compromised by diseases such as brucellosis, hemorrhagic septicemia, foot rot, and scabies (and the looming threat of chronic wasting disease), but refuge plant communities have been degraded over the years by maintaining elk and bison numbers exceeding what the land can support. The feeding program, by definition, is confirmation that the range has been overstocked. Were populations of those species limited to what their food sources could sustain without harm, feeding would be unnecessary.

Over the years and decades since the NER’s establishment in 1912, plant communities have been drastically altered by excessive browsing. One might ask, “How is it that over-browsing has occurred when the animals are fed?” Feeding occurs over an average of 70 days of the 6 months that elk and bison spend on the refuge each year. Even during the feeding season, the animals continue to balance their diets with a diversity of foods. Remarkably, 95 percent of tall willows have disappeared from refuge lands, cottonwood shoots have no chance of becoming trees, and half of all 143 aspen stands on the refuge are deteriorating, unable to replace dying mature stems with new saplings, due to chronic browsing by elk.

The consequences are not only a changed landscape, but a declining abundance of other vertebrate species, especially birds. Investigations by refuge biologists, other scientists, and graduate students, have documented declining biodiversity of species that require woody plant communities. Flat Creek too — an important spawning stream for Snake River cutthroat trout — lacks the streamside cover to moderate water temperatures and limit siltation. While the absence of willows may make fly-casting easier, hydrologist Alan Galbraith also found it makes for less stable stream banks, less terrestrial insect life to nourish fish, and less screening of fish from avian predators.

The red-tailed hawk provides an example of how subtle changes in habitat insidiously reduce densities of animals. In the 1940s and 1950s, Frank and John Craighead first catalogued nesting pairs in Jackson Hole. John’s son Derek and colleagues have repeated those original surveys and identified a number of natural and anthropogenic changes related to waning redtail numbers.

When I was hired as the refuge biologist in 1982, a pair of redtails nested in a small aspen stand adjacent to the refuge’s McBride feedground. Like other groves near elk feedgrounds, this stand grew few new stems, and only two dozen live trees remained in the overstory. In May 1993, graduate student Roger Smith and I banded the two nestlings hatched by that pair. Not only was the nest tree no longer living, it was the last stem standing in the grove. At least the redtails had picked the right tree for their nest!

That last aspen soon joined its fallen cohorts, and the redtails were forced to find a new nest tree. Like most bird species, redtails are territorial, so the pair’s greater challenge was to establish a territory uncontested by other pairs. Derek Craighead notes that red-tailed hawk territories — and even specific nest trees — are rigidly occupied for decades in Jackson Hole, and a finite number of suitable spaces occur on the land. Birds, like aspen, disappear one pair or grove at a time.

All species in a habitat or ecosystem are interdependent, from lowly bacteria to top-rung predator. None is dispensable, though some are certainly valued more than others by humans. Nowhere has this concept been more eloquently stated than in Aldo Leopold’s A Sand County Almanac. “The outstanding discovery of the twentieth century is not radio or television, but rather the complexity of the land organism. … If the land mechanism as a whole is good, then every part is good, whether we understand it or not. If the biota in the course of eons has built something we like but do not understand, then who but a fool would discard seemingly useless parts? To keep every cog and wheel is the first precaution of intelligent tinkering.”

Because life and the threats to it are not spread evenly across the planet, some places like the Greater Yellowstone Area are more secure than others. It is in the tropical and subtropical regions and certain temperate forests where biodiversity is richest and species losses are out of control. Tropical rain forests, for example, cover just 3 percent of the Earth’s surface but support over half of all known species of plants and animals. In a seminal 1988 paper in the Environmentalist, Norman Meyers identified 10 tropical forest “hotspots” characterized both by exceptional levels of plant endemism (found nowhere else in the world) and by serious levels of habitat loss. The concept of biological hotspots has been widely adopted to focus conservation strategies toward those areas where biodiversity is at greatest risk. Subsequent reassessments have added 24 more hot spots due to rampant fragmentation and destruction of natural plant communities.

The Jackson elk herd roams the heart of the Greater Yellowstone Area, and the NER was pivotal in rescuing this majestic herd early in the 20th century. But things were far different then. Large mammal species were imperiled across the United States due to the crush of Euro-American exploitation in a land where former bounty had seemed endless.

Bison and elk were seen as competitors with cattle and sheep, and predators were viewed as a scourge on the land. Passenger pigeons and egrets were shot without restriction for food and plumes.

As the emerging art and science of wildlife management evolved from production of favored species (those popular with sportsmen and to eat) to a more enlightened understanding of the interrelationships of all species in ecosystems, state and federal laws and conservation programs encompassed “non-game” species like songbirds, amphibians, and carnivores. We now know that winter feeding signifies an ecosystem out of balance, and one that may jeopardize the elk and the very habitats they and other wildlife rely upon.

Whether a Jackson Hole aspen grove or a Madagascar rain forest, when a natural habitat is degraded or supplanted, more than endemic vegetation is lost. The nesting red-tailed hawk may not find a suitable territory elsewhere. Indri lemurs cannot migrate across a slashed and burned landscape to another suitable patch of shrinking forest. As the trees perish, so do associated life forms. A woodland or forest is more than just trees. This was the scientists’ message during the 1990s debate pitting old-growth forest logging against conservation of the Pacific Northwest’s northern spotted owls. It’s not strictly about the owl, but about the community of life that shares the owl’s home.

This commonality links conservation on all continents. As the currency of wildlife — its habitat — declines, populations become increasingly isolated. Some parcels merely offer transient asylum, while others may receive formal protection as refuges and parks. Ironically, these safe havens may become victims of their protected wildlife, especially over-abundant large herbivores as is the case of fed elk in Jackson Hole. Balance as well as human benevolence remain necessities for all Earth’s life to persevere.

The National Wildlife Refuge System Improvement Act was long-overdue legislation that incorporated these ecological precepts into conservation policy. No longer can management of wildlife refuges remain so narrowly focused as to produce an abundance of a few species at the expense of the diversity and health of other life forms. The recent federal court ruling may not have mandated a timetable, but it instructed the U.S. Fish and Wildlife Service that the NER must embark in a new direction consistent with Congress’s intent. 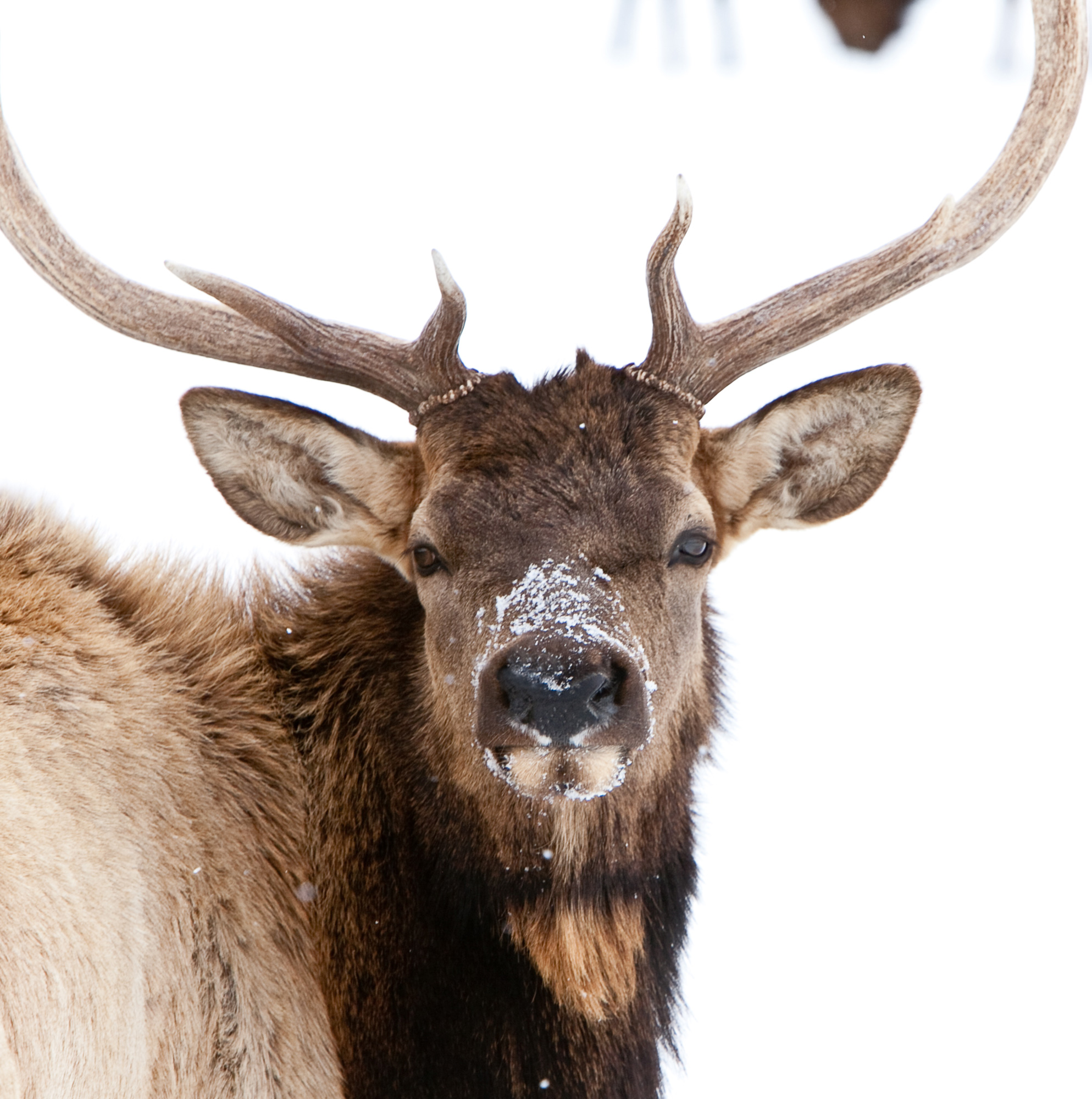 The Jackson elk herd roams the heart of the Greater Yellowstone Area, and the NER was pivotal in rescuing this majestic herd early in the 20th century.

Two bull elk spar at the National Elk Refuge outside of Jackson, Wyoming, which was created to provide a winter sanctuary for the animals in 1912. The practice of winter feeding of the elk has been questioned due to health concerns within the herd as case