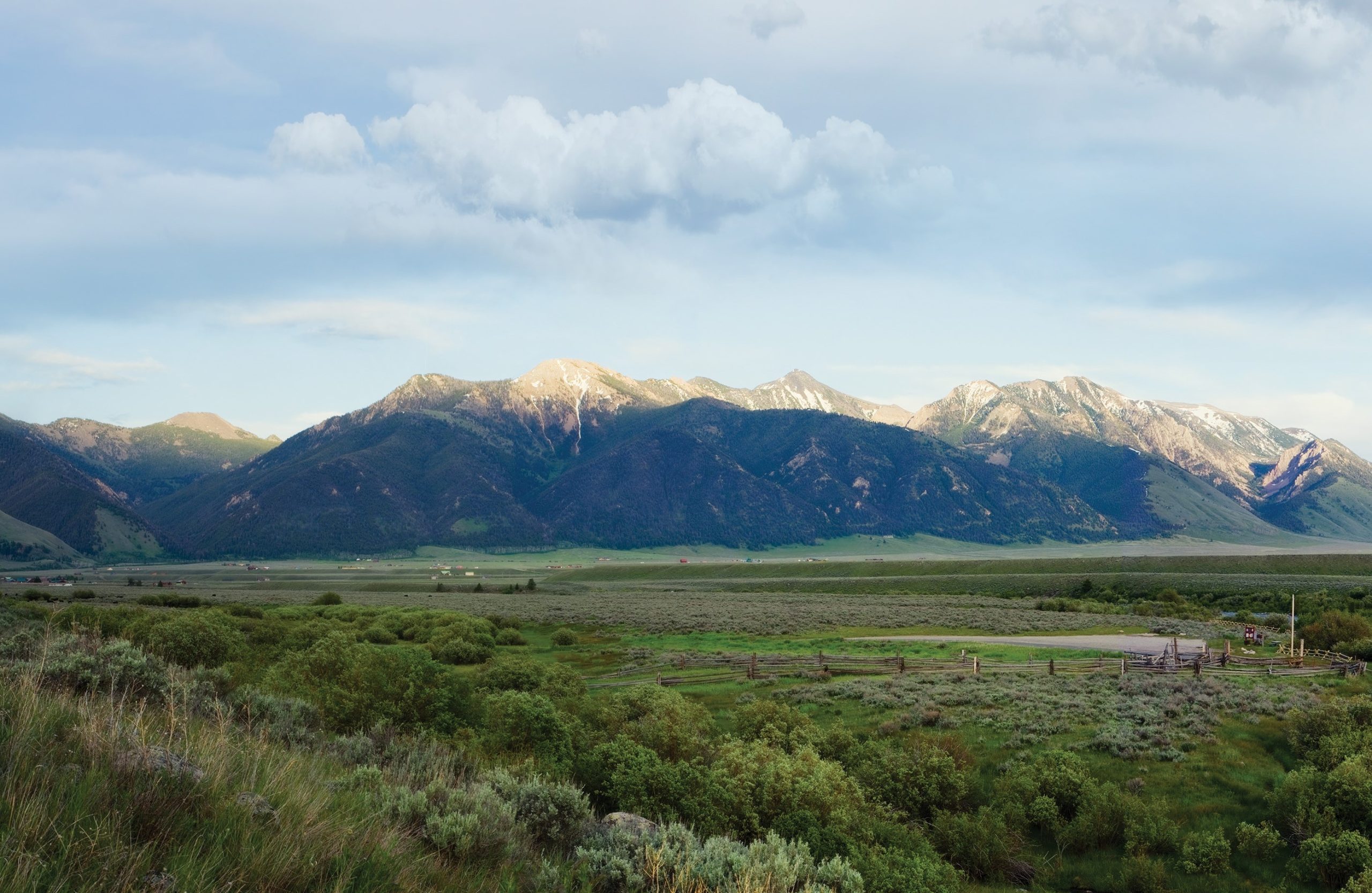 I was looking out the window, watching the last bit of winter drip off the roof, creating a Morse code message of sorts: longer drips keyed in amongst tight, neat drops — all of them bursting with sunlight. If I’d known the code, I might have penciled out a message, though it probably would have amounted to little more than wet gibberish.

It was just shy of the March equinox, which always feels to me like a flashing date on the calendar: Warm spring days mean that there’s dry-fly fishing just ahead. Fishy things start to happen when winter melts out of these rivers.

The way the beads of liquid light hit the patio slab, flattened out, and then slicked across the pebbles in the concrete reminded me of a stretch of gravel I like to fish at Raynolds Pass on the Madison River. It’s just over the bridge and about a quarter-mile downstream along the buffalo grass flat where the Canada geese lay their eggs each April. Anglers can take the bank-side path below the bridge, or high-line it along the bluff and through a stile in the fence. How you do it depends on your priority: You can move much faster up top, but you’ll find valuable information along the banks below.

I prefer to walk the water and see what might be happening. The danger there, of course, is that “too much” might be the answer in the form of rising fish. When it is, I tell myself, just one cast, but as most fly anglers know, it will always be more. Then the pre-dawn plan to get down ahead of the daily assault on the Madison’s undefended water gets all wet itself. 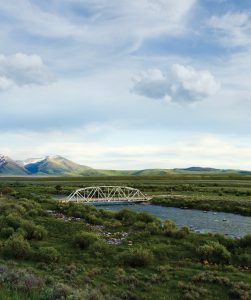 The Three Dollar Bridge crosses the upper Madison River and is a legendary spot for fly anglers. | Photo by Eric Schmidt

If I’m disciplined, I keep the fly notched in the cork. I watch as I walk, looking for hatches and places where the fish are holding. I like to fish this area in the spring — there are always trout among these boulders, and oftentimes some big ones. And here we were, coming up fast on those sprawling, supple days.

It was a cold morning; a skim of frost was gleaming up the windshield, ice crystals rimmed in prisms of dawn color. I got out early and followed the two-lane blacktop that slivers through the corner of Yellowstone National Park, and then skirts around the lakes.

Hebgen Lake stretches out as white as a salt flat — like a broad, floating glacier — and it won’t ice out until May. For now, the Madison River’s current still pushes along underneath, flushing through the dam at the lake’s west end. The river jostles along after that, but not for very long. Instead, it floods into the ghostly forest along the shore of Earthquake Lake, where haunting posts of Douglas fir, stripped of bark and needles, rise like a tragedy from smoke-green waters that were trapped by a mid-century accident of plate tectonics. Up until an August night in 1959, 60 million cubic yards of Cambrian geology formed a rampart above the river canyon. Then — crack! — it came down the mountain and dammed up the river. For the campers sleeping there, including the 19 who’ve been buried ever since, it must have sounded like the thunderstrike of Armageddon — though only for a moment.

The lake condenses through the rubble of these unmarked graves before the Madison River forms up again below the rock slide that’s still spread across the canyon. It runs beneath the hillocks of debris, pierced by splintered timbers thrown off the parapet of the collapsing ridgeline. The memories of the dead go filtering downstream here, with pale, haunting wistfulness.

At Raynolds Pass, the Madison flows like liquid glass, so clear that I swear for a moment its bottom cobblestones have floated to the surface. This river is a beautiful collaboration of altitude and aquifers — of water, old and young. In late March, angler demand is down. The folks you do find are experts, or at least local, which means they’re in spots that are likely dense with trout. It’s disheartening to come upon someone in a place on the river you’d dreamed about all winter. But this stretch bursts with so many lovely opportunities: braids below the point bars, foam-topped slots, and winter pools. The deep, slow seam just off a log that’s been silvering here since before you can remember begs a try. But, before settling in, it’s wise to take note of the angler with in-state tags on his muddy pick-up. He’s where you’ll want to be next time. 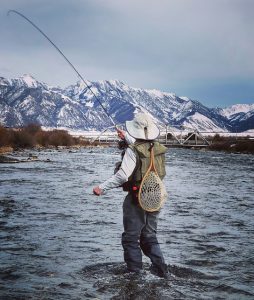 The author hits the upper Madison in the early spring when the snow still clings to the mountains. | Photo by Scott Bosse

From the bridge, I can see that there are no cars in the lot. Where’s everybody else? The temperature is rising, and the wind — so often ruinous here — has hurried off to wreck the dry-fly fishing somewhere else. The midges may come out for a look, and when they do, it’s with a quiet evanescence that builds into soft-cloud jamborees. These arouse the fish and, of course, the anticipation that I’ve worked very hard all winter to contain.

Midges are small, not much more than a smudge, and trout do not attack them. Instead, a trout’s rise to a midge is like contemplation; a soft pause, as if pondering things not even present. And, in a trick of optics, midges often appear that way; you may see them in the air and then track them on the surface, but somehow not into the places where the next fish sips. The midge feed, I read some time ago, looks like the trout are eating water. I think that sums it up nicely.

Even when the hatch behaves like nothing more than an echo or a forecast, you can make a name for yourself with midges if you run a washing line of pupas — zebras or jujus will do — draped out to a bobber on the tippet end. Later, I often try emergers in the film. By evening, spinners drop exhausted to the water. Those who are young and still have able eyes might want to use a Trico, but I prefer a cluster.

Fallen midges mat up into the foam, an invitation for closer inspection from below. At this point, Griffith’s gnat — or anything wrapped with peacock feathers on the shank — will do. Other than that, fishing the Madison in March is the same as summer: dividends, and no demerits for arriving early on the scene.

Early is the most wondrous moment. A gaze into the debut of a high-country river day is as close, I think, as I ever get to watching time stand still. The air fills slowly. Spring light, warming and then melting out, flows above a sweep of snow along an unmanned twist of water. It glows, with what might be the gentle incandescence of resurrection. If I am still enough and quiet, I can follow nature’s cadence: the river gently cradling fish in sluices of food and current lines that appear no wider than their mouths. They fin and sip. There is no more beautiful use of water.

On first days out, trout are not the only ones in winter form, though the angler lacks their sort of harmony. We make mistakes. Missed sets on startlingly apparent takes. Mis-timed casts of weighted double nymph rigs can get bungled into a mess so dense that surgeon’s scissors quickly come to mind. There are forgotten fundamentals: long casts, it seems, still demand expansive personal space, especially behind us.

Last year, right below the high bank, I let my back haul get low and loopy. The line tied into the bole of an old bent scrub that was grasping through the snow. I kicked toeholds up the bank, and it took some time to free the fly. Two gray-faced anglers were watching from the far side of the river with their rods slumped at wind-blown angles, as if set down for the last time. I touched my hat brim and waved. The men made no gesture that they had even noticed. I wondered what sort of fishermen they had been: swollen with endurance, enough to push through the waist-deep of freestone rivers? Did they pole a tarpon boat all day, impervious to the salt-hot southern sun? They could do neither now. I walked away and up along the icy river stones. Soon all I could recall was a gray-ink silhouette, slumping deeper into silence; men nearly out of time.

That afternoon, there were no insects on the water; no rising fish. None of the cheering plunge and run of the bobber, or the joyful, weightless terror of hoping the set will hold. Only the current seemed alive.

Angling is a search for certainty, and this river remained selfish with her secrets. I added lead and then removed it. Then, I slipped the bobber up and down the line. I probed boulders, mid-river slicks, and gravel bars where they tilted into deeper water. For hours, nothing changed.

Some time ago, I came to believe that futility is an excuse for eggs and worms, which share little in common with flies, though much with the items used by bait casters. This makes them seem like cheating — though when you’re getting skunked, cheating somehow feels fair. If either pattern gets the fish, there’s time later to sift through the allegations.
So I switched things up.

Regardless of my moral strike zone here, the eggs did it. I reeled in long, slender browns — the lean fighting fish that Chris Richer calls “the river snake persuasion.” Then, with his deep-south enthusiasm brimming over: “Look at’em! Goddamn, they skinny!” Chris is from Vermont; it remains an endearing, river mystery why he talks like he’s surfcasting Alabama, though I’m glad he does. In this solemn pursuit, we need the comfort of such brotherhood. But yes: They skinny. They’re drawn out like adolescent basketballers, with no muscle through the shoulders (a term that should arguably never be used with trout in the first place).

Whatever their anatomy, some number of these browns liked the eggs — most in a single hour from a slot of sparkling contentment beneath a bouncy current, and all on those fraudulent, acrylic beads. I recall that, as I played the fish in, I didn’t feel too bad about it. Though sometime later, I realized I probably should have.

I have my camp chair stationed on the asphalt, a sentry post. I’m ready to get out ahead if cars appear, but they don’t. I drink the last heat out of the coffee. Wrapped in the silence of this well-being, I regret, for just a moment, that there is not another cup left in the thermos. The air has warmed up; it’s time to go. So, into the vest and over the rail at the edge of the bridge I go.

I’ve tied on a double-hooked white streamer, for style points perhaps. It’s mostly too much payload for this old 5-weight. It’s a magnificent device for celebrating dry flies, though if I keep a short-leash, it has enough authority to manage the big smolt pattern through these bankside seams. That’s a fine thing to do while I contemplate what else might work.

I stair-step down the rocks on the shady side of things, amongst the last cairn piles of snow beside the sagebrush clusters. The river vibrates with holy notions, both sacred and profane: nameless graves in landslide runouts, trout caught on plastic eggs. Out among the boulders, there are midges coming off. The fish are eating water.