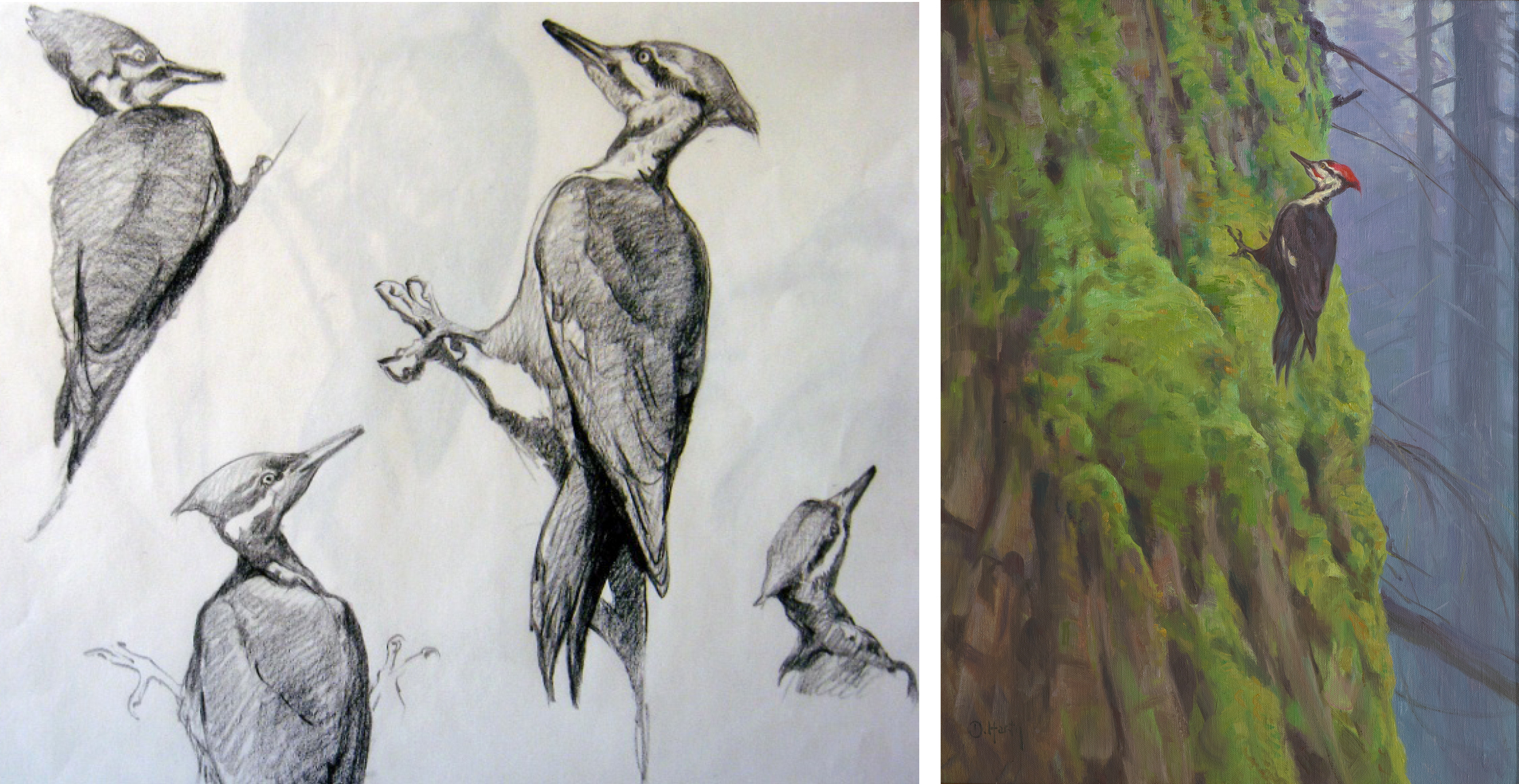 DWAYNE HARTY WAS CAMPED IN THE BOONDOCKS OF THE MUSKWA-KECHIKA, a two-week, horse-pack trip away from the outside world. Weather had been foul for days, the knife-edged mountains of northern British Columbia engulfed by clouds delivering a relentless deluge of summer snow and rain.

With all passes rendered too treacherous to navigate, he was stuck. Huddling beneath a tarp, Harty continued to crank out one study after another. “The conditions for painting were miserable, but the solitude was glorious,” he says.

Today the question is: Will Harty, a 21st century wildlife painter, join them in posterity?

Before one begins to ponder an answer, it is first necessary to resolve another query: What circumstances had propelled the 50-something artist to a place where humans rank at the bottom of the local mammal census, behind grizzly bears, wolves, wolverines, and woodland caribou? Moreover, what relevance does the boreal North have for Americans in the Lower 48?

Although a century has passed since those legendary artists, mentioned above, combined fine art with naturalistic documentation to inspire the masses, their tradition of exploration painting, as exemplified by Harty’s new body of work, is far from over.

“Art and conservation are natural allies — one feeds on the other,” says Harvey Locke, a renowned Canadian environmentalist who is helping to spearhead innovative approaches to landscape protection around the world.

“Art can put you in a frame of mind where you see things different that might not be visible otherwise. Artists often pick up on things before they register with the rest of society.”

During the summer of 2011, Harty, a little-known Canadian from Saskatchewan who now makes his home in the United States, finds three dozen of his oil paintings at the center of an exciting exhibition. Yellowstone to Yukon: Journey of Wildlife and Art is making its debut at the National Museum of Wildlife Art in Jackson Hole, Wyo., and bound next year for the Whyte Museum of the Canadian Rockies in Banff National Park.

The ambitious assemblage of paintings and sculpture features works by prominent American and Canadian nature artists who, over two centuries, were drawn to the spine of the Rockies — more specifically the wending Yellowstone to Yukon corridor stretching 2,000 miles from the sand dunes in Wyoming’s Red Desert to the moose-trodden muskeg and Dall sheep crags of the near-Arctic North in Yukon’s Nahanni preserve.

The showcase has already been heralded by critics as one of the must-see art events in the West. Adam Duncan Harris, chief curator at the National Museum of Wildlife Art, says it novelly uses traditional art as a platform for thinking about relationship with nature in the 21st century, with Yellowstone to Yukon representing the wild backyards to two vast nations.

Locke, prime instigator of the exhibition, says that like nature herself, impact is achieved through the sum of all the artistic parts rather than the priceless value of individual pieces. But what makes the event so timely and topical is Harty’s provocative contribution. He painted some places never painted before.

Harty is already well known for the grand diorama backgrounds he has painted at several natural history museums across Canada. He also was mentored by famed Canadian-American artist Lougheed, a plein air master who settled in Santa Fe, and Tillenius who made his home in Winnipeg and was a student of Rungius. Harty was hand-picked by Locke to visually document and bring special attention to areas in the Yellowstone to Yukon corridor such as wildlife migration routes that exist as vital lifelines yet in some cases are under imminent threat from human development pressure. Held together by contiguous topography, Yellowstone to Yukon boasts the most diverse range of major species outside of Africa but without safekeeping, Locke says, it could unravel.

Locke has his own keen connection to wildlife art. Growing up in Alberta, he spent summers in Banff National Park where his family had a close friendship with Rungius [1869-1959], widely regarded as the finest North American big game painter of the early 20th century. Shortly after Rungius emigrated from Germany, he spent a significant amount of time, as a young man, on the Box R Ranch near Cora, Wyo., which he used as a base camp for painting scenes in the Wind River Mountains.

Later, Rungius headed north and divided his time between New York City and Banff, from which he launched several notable painting expeditions into the Canadian Rockies.

“Rungius didn’t map out the Yellowstone to Yukon corridor from an ecological perspective, but he certainly did do it instinctively as an artist,” Locke says. “He recognized its dimensions from a habitat perspective and today that informs the science of wildlife conservation. He was ahead of his time.”

Nearly three dozen oil paintings are part of the traveling exhibition. One of the first paintings Harty made is not in the show but is instead part of the private collection of Ted Turner. The work illustrates the dividends of land protection, reflecting how topography and open space can be “re-wilded.”

While the bulk of Harty’s portfolio focuses on public lands, this piece was inspired by an outing he took to Turner’s Flying D Ranch near Bozeman, Mont., a stretch of land that sits squarely in the Yellowstone to Yukon eco-region.

During the 20th century, the 113,000-acre ranch had been largely depopulated of large carnivores because of clashes with previous owners raising cattle. But under Turner’s stewardship and his restoration of bison, he put out a welcome mat to a wolf pack that has taken up residence. Harty’s small but dramatic oil painting is titled Wolves Return to the Flying D and it is a focal point of enormous pride for the former media magnate turned eco-humanitarian.

Locke sees Harty’s journey as a means for making conservation issues tangible, yet doing it in a way that isn’t divisive or politically charged. “When people are brought together by the things they love, you’re able to have conversations about common values,” he says.

With private backing from conservation patrons, and technical support from the Wild Foundation, where Locke is a senior executive; and the Yellowstone to Yukon Conservation Initiative, where Locke is a founder; and organizations like the Murie Center in Moose, Wyo., and Jackson Hole Art Association, Harty was commissioned to paint an array of species.

It’s poignant that Harty has resided for the last few years at the historic ranch that once belonged to the Murie family of American conservation lore. Brothers Olaus and Adolph Murie, and their wives, Mardy and Louise, championed the ties that exist between art and reverence for wild things, says Murie Center Director Steve Duerr.

A few years ago, Duerr escorted Harty on pack animals to a vantage point, New Fork Lake, in the Wind River Range where Rungius had set up his portable easel. Below them, they mused about an ancient pathway navigated by pronghorn antelope that move each year between Grand Teton National Park and the flats outside of Pinedale, Wyo. Those animals today face an uncertain future, as oil and gas development, combined with residential subdivision, is pinching shut the route known as “Path of the Pronghorn.”

In the modern world, true wildness is a concept that almost escapes the imagination of citizens who are mostly urban, though it is embedded in the heritage and spirit of both Americans and Canadians, Locke says.

Despite human jurisdictional boundaries that require a passport to navigate, Yellowstone to Yukon, Locke adds, reminds people that nature adheres to no such invisible lines. In addition to being a reservoir for wonder and awe, its ecological function, on a practical level, has implications for millions of people living beyond the sightline of the Rockies’ towering peaks.

This rugged spine of mountains is an enormous source of clean freshwater, a refuge for still healthy populations of big game species and millions of breeding birds, engines for tourism economies, communities dependent on ranching, logging, and mining for their livelihoods, and a valuable laboratory related to climate change.

Just saying those things, Locke says, may or may not ignite a reason to care, but Harty’s paintings of wild denizens that make their home in the wending Yellowstone to Yukon backcountry gives the message visual coherence. And it does so in ways not altogether different from when painter Thomas Moran had his large canvasses of Yellowstone on display before members of Congress, convincing lawmakers to set it aside, in 1872, as the first national park in the world.

Interestingly enough, it was another artist, George Catlin, who in the middle of the 18th century, while exploring the high plains, presciently recognized the need to have a massive preserve to safeguard, for time immemorial, the native attributes of the continent.

In the Yukon and northern British Columbia, Harty ventured to places reachable only by pack animals that required weeks to enter; gorges where it looks like the Ice Age retreated not millennia ago, but last week. Most Americans, even those gifted to reside on the wildest edge of the mountains, may never see a wolverine in their lifetime. Harty, with shepherding by his guide, Wayne Sawchuk, encountered five on a single foray, along with a dozen grizzlies and wolves.

Yet another fascinating tangent is that Harty’s painting, Strength and Vulnerability— depicting a globally famous grizzly bear mother known as No. 399 to researchers,  and her triplet cubs — was selected to adorn the 2011 Jackson Hole Fall Arts Festival poster. One of the cubs was tragically shot by a big game hunter three autumns ago. The original oil will be auctioned off in September, part of its proceeds going directly into protecting habitat and promoting environmental education.

Besides the major oils that are part of the museum exhibition, Mountain Trails Gallery in Jackson and Willock & Sax Gallery in Banff are representing 100 of Harty’s plein air sketches and dry point etchings that are for sale.

“Dwayne’s talent as an artist goes beyond the typical ‘observe and report’ style that many artists out there fall into,” says Kevin French of Mountain Trails Gallery. “His ability to capture a moment gives a wide range of color and brushwork within his plein air paintings is what excites me about these works. In visiting Dwayne at work in his studio, it was fun to compare his studio paintings with his plein airpaintings, which he used as a primary reference for his Yellowstone to Yukon paintings.”

Locke says that as a body of work, this one is guaranteed to appreciate in value in the same way a beloved wildland does, serving as a counterpoint to places that lose their natural character and identity.

He believes that in 50 years time, Harty’s works will be poignant historic barometers, just as works by Bierstadt, Moran, Catlin and Bodmer continue to be, enabling scientists and local human denizens to go to the same places they painted and see if the ecosystems are still intact.

“This assignment was the opportunity of a lifetime,” Harty says. “My intent was to honor the landscapes and the animals inhabiting them. If I could have any wish, it is that at the end of this century those places between the frame remain as inspiring to future generations as when I experienced them with my own eyes.” 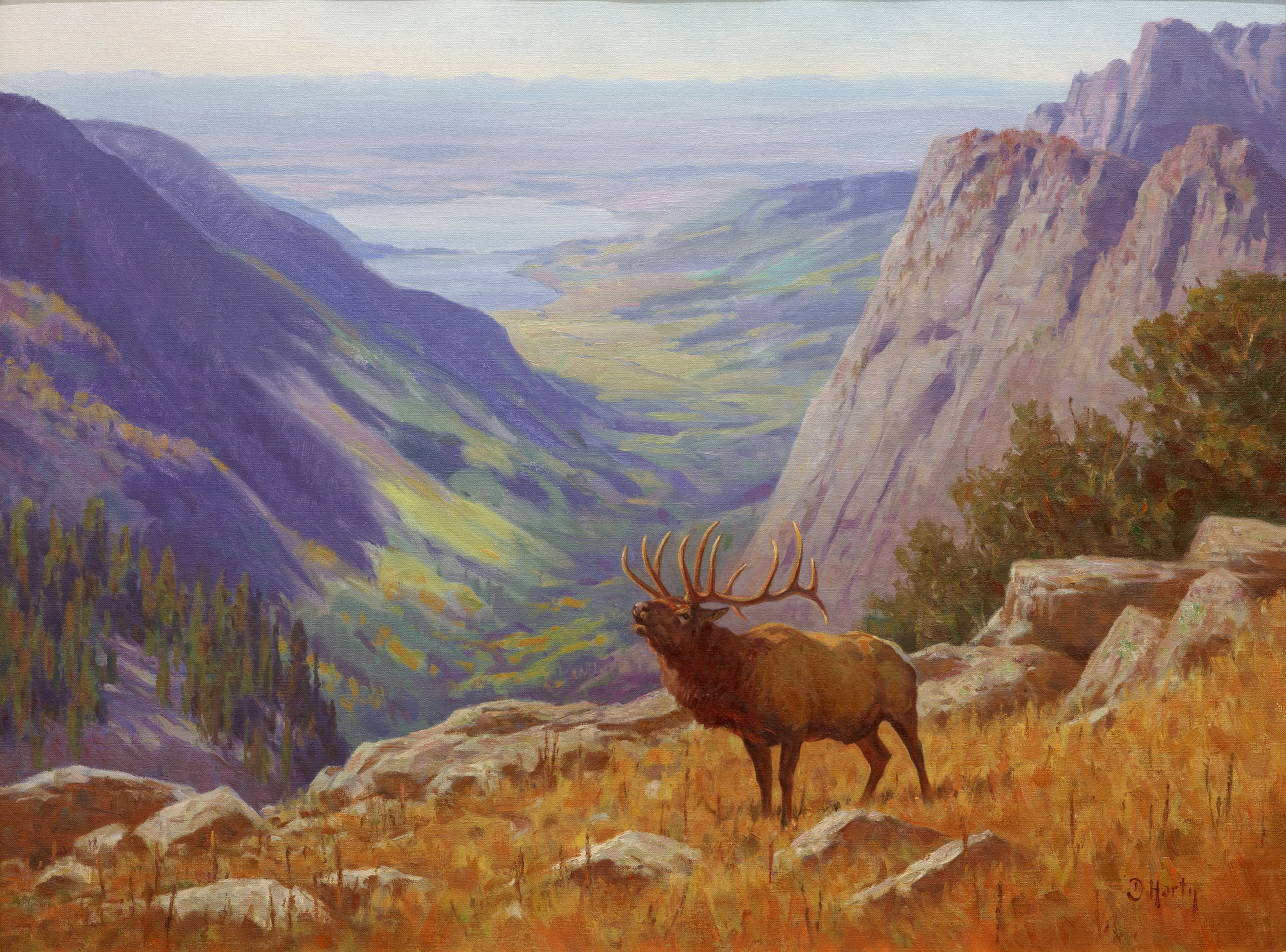 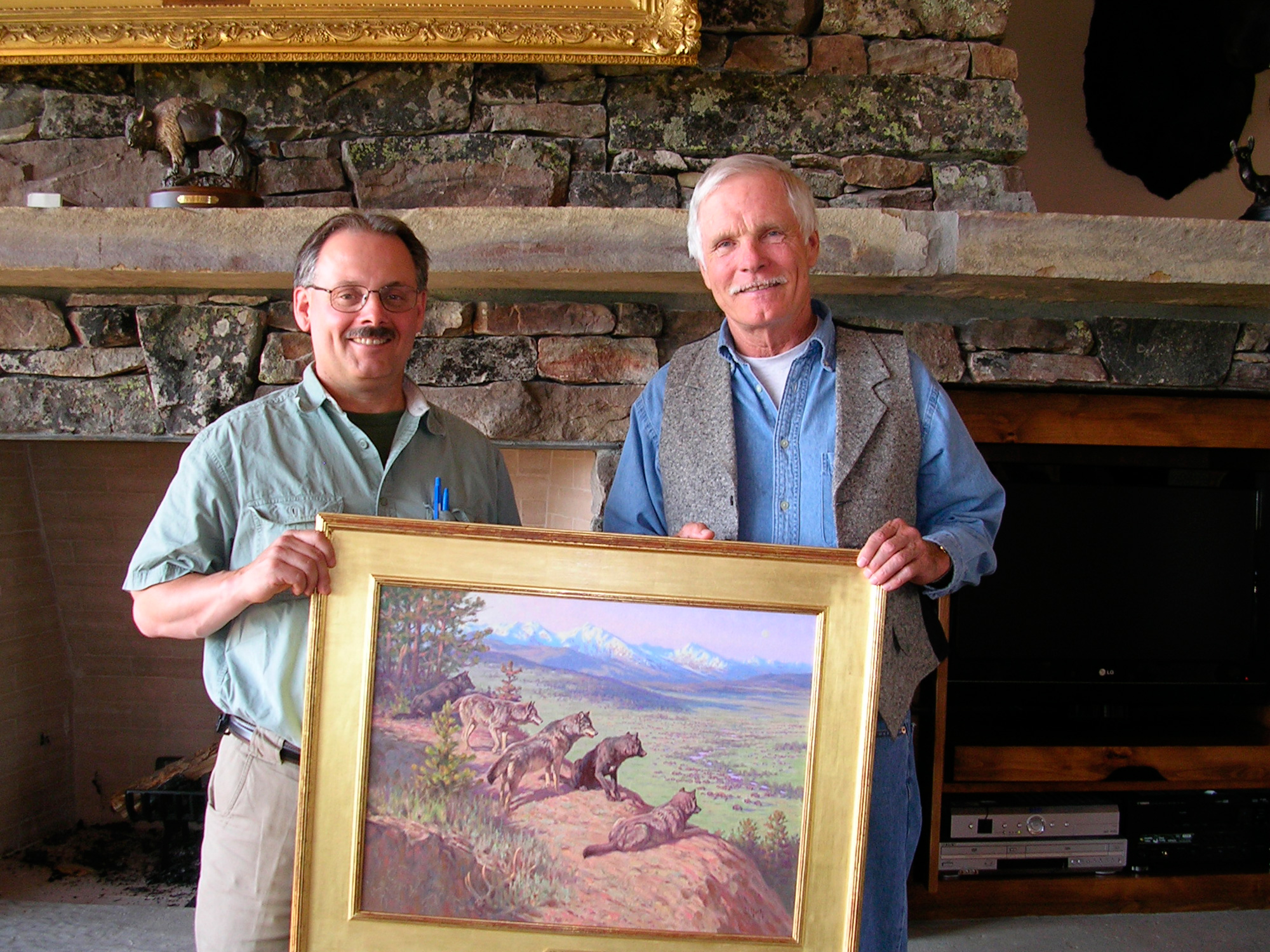 One of the first paintings Harty made is not in the show but is instead part of the private collection of Ted Turner. The work illustrates the dividends of land protection, reflecting how topography and open space can be “re-wilded.” Photo by Todd Wilkinson 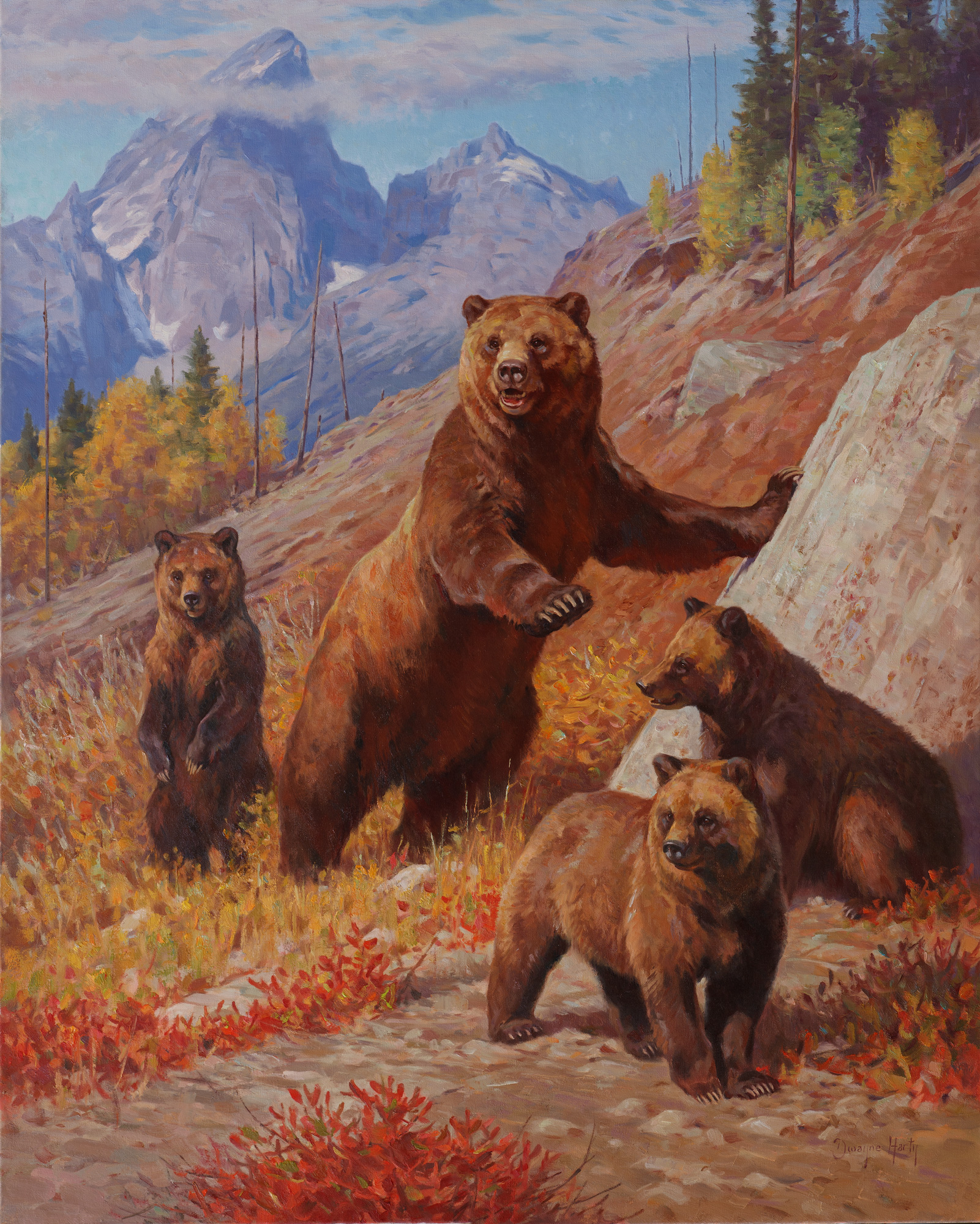 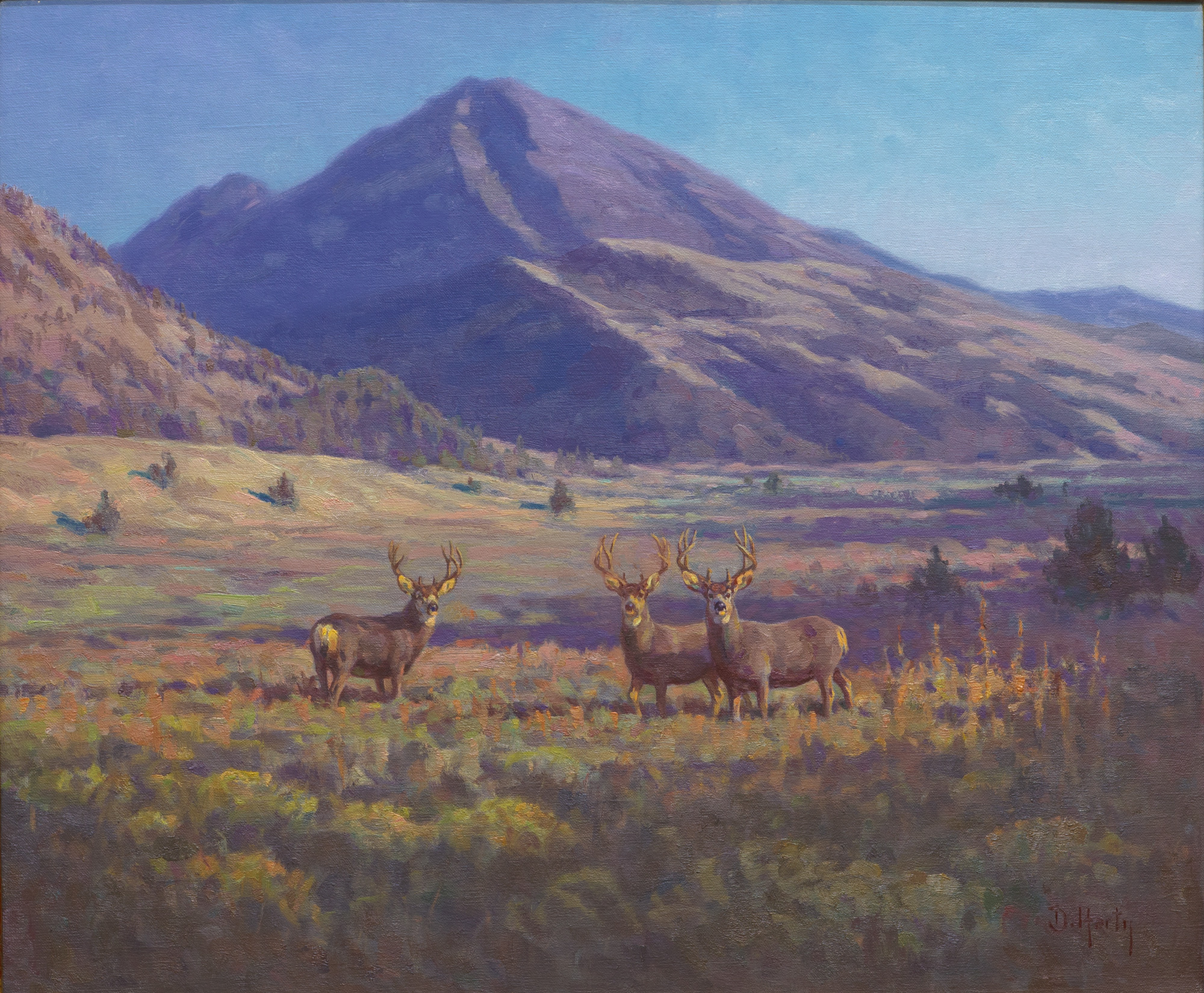 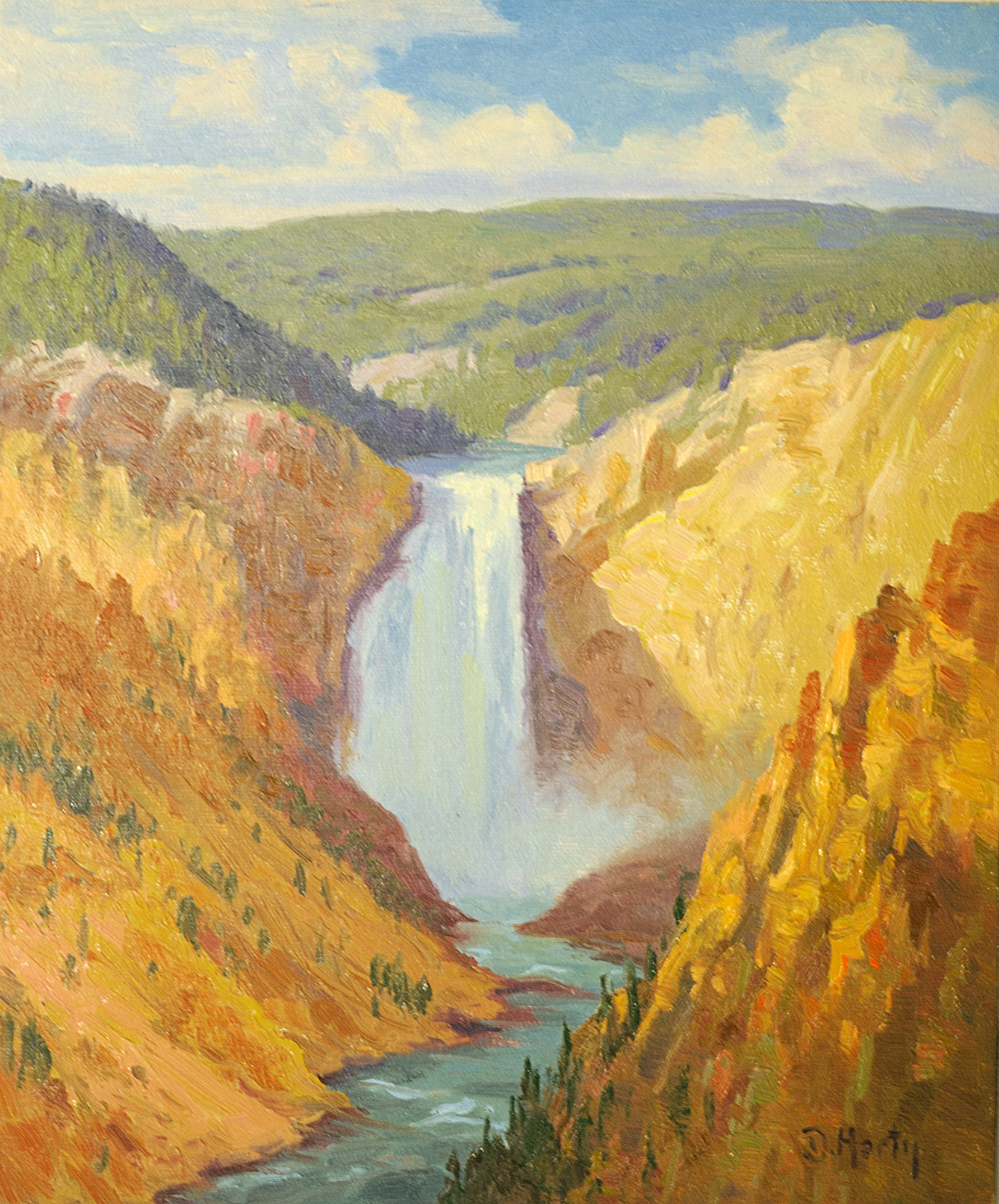 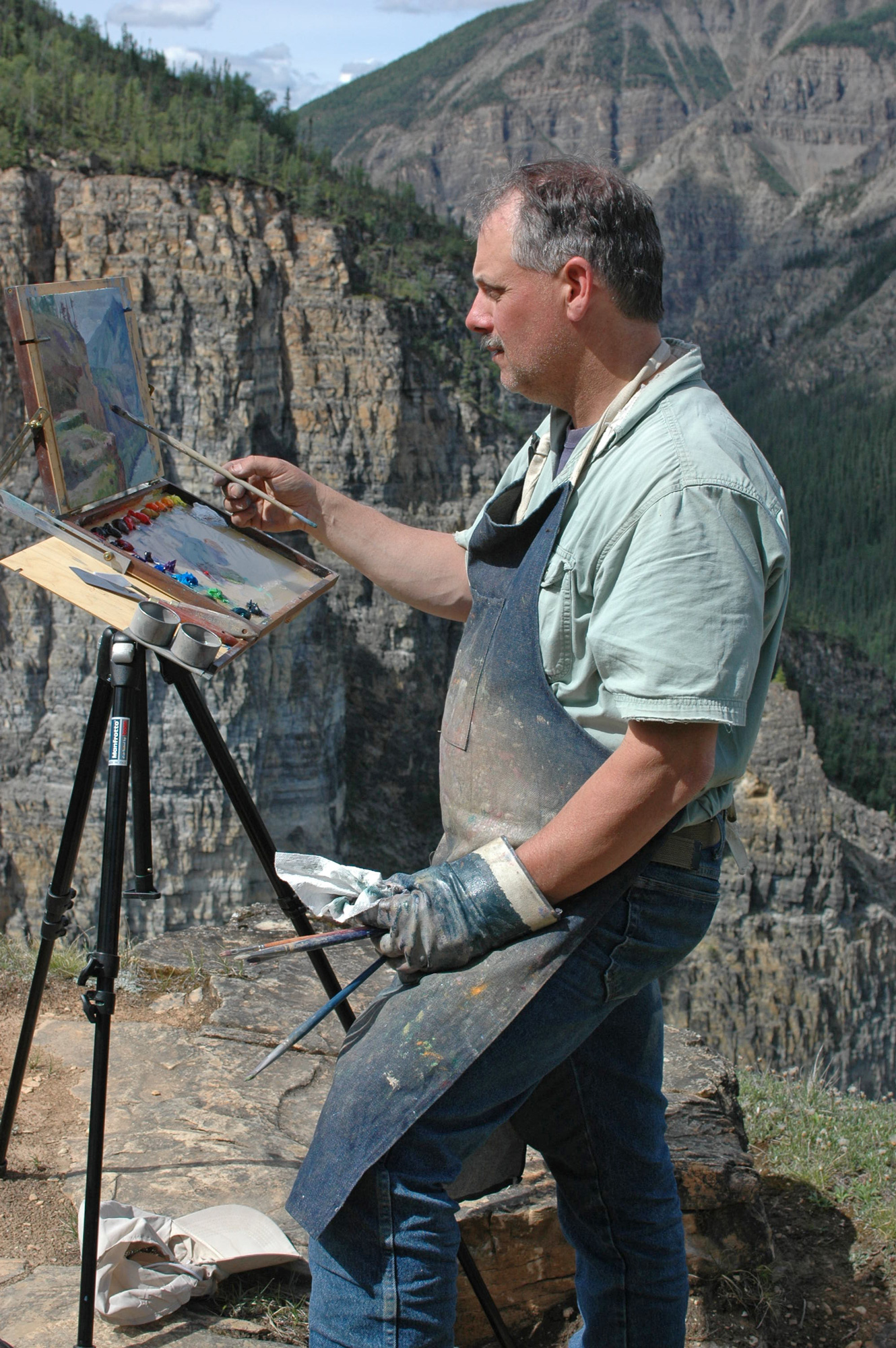 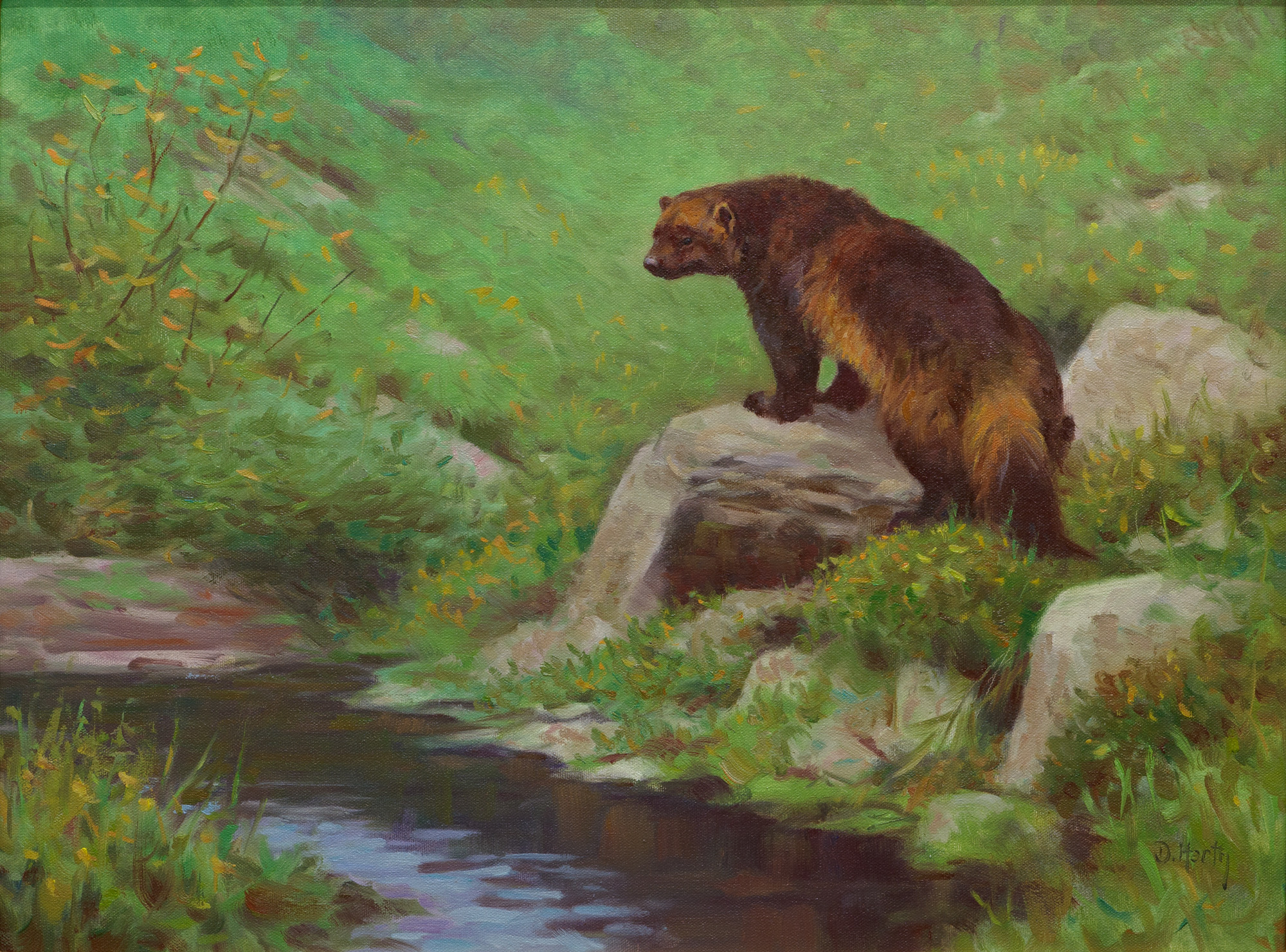