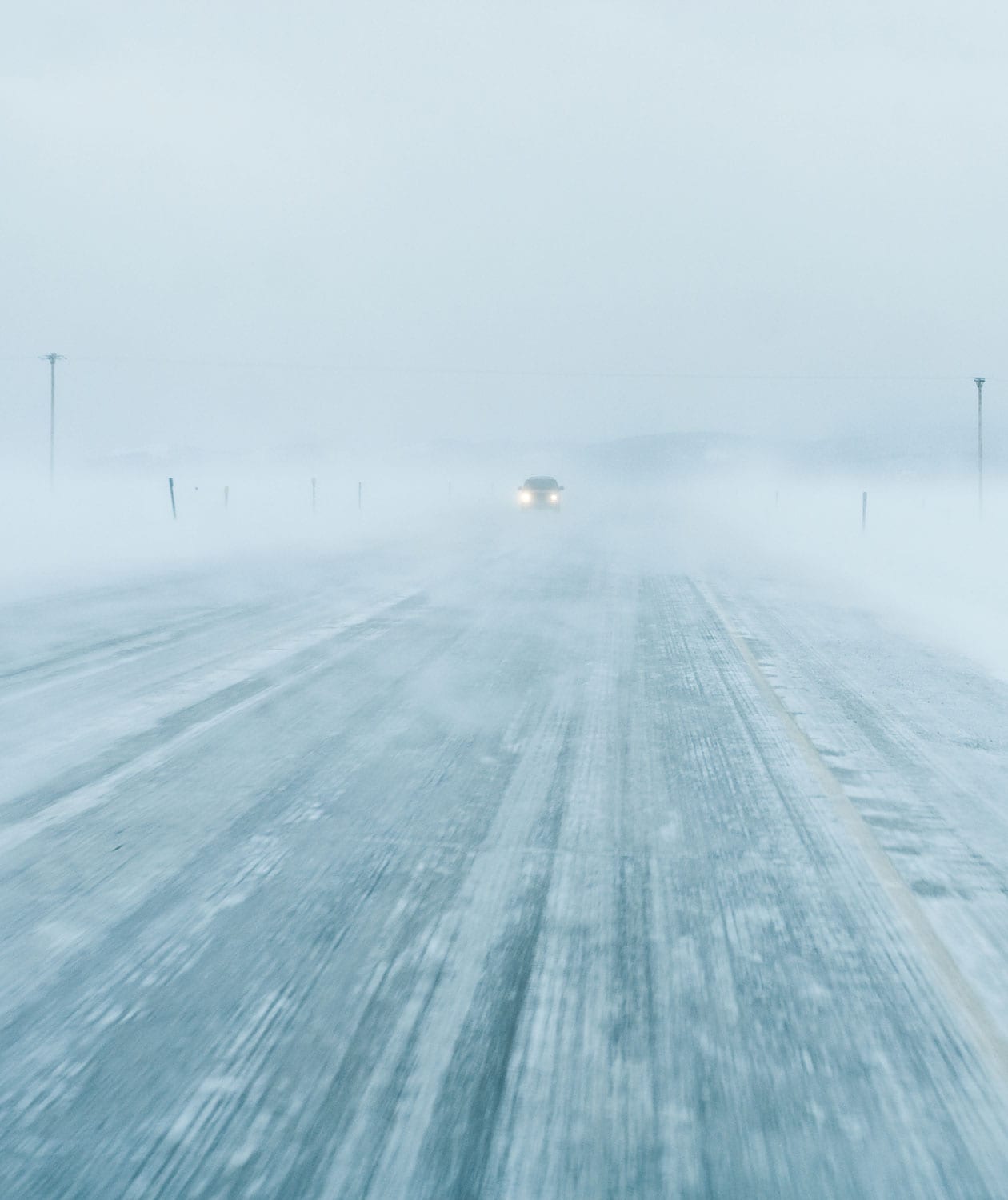 A writer takes to the wintery open road

Dense fog hangs above Montana’s Bitterroot Valley on this, a crisp December morning. The fog creates a mushroom cap of mist, through which it requires low beams to yield even a sliver of visibility. I’ve inched south from Missoula through the towns of Lolo, Florence, Victor, Hamilton, and Darby. The Bitterroot Mountains remind me that, on course to the Big Hole, I’ll need to climb Lost Trail Pass at 7,014 feet, then Chief Joseph at 7,264. I worry that beyond the Divide and on a plateau of such height I’ll be socked in. 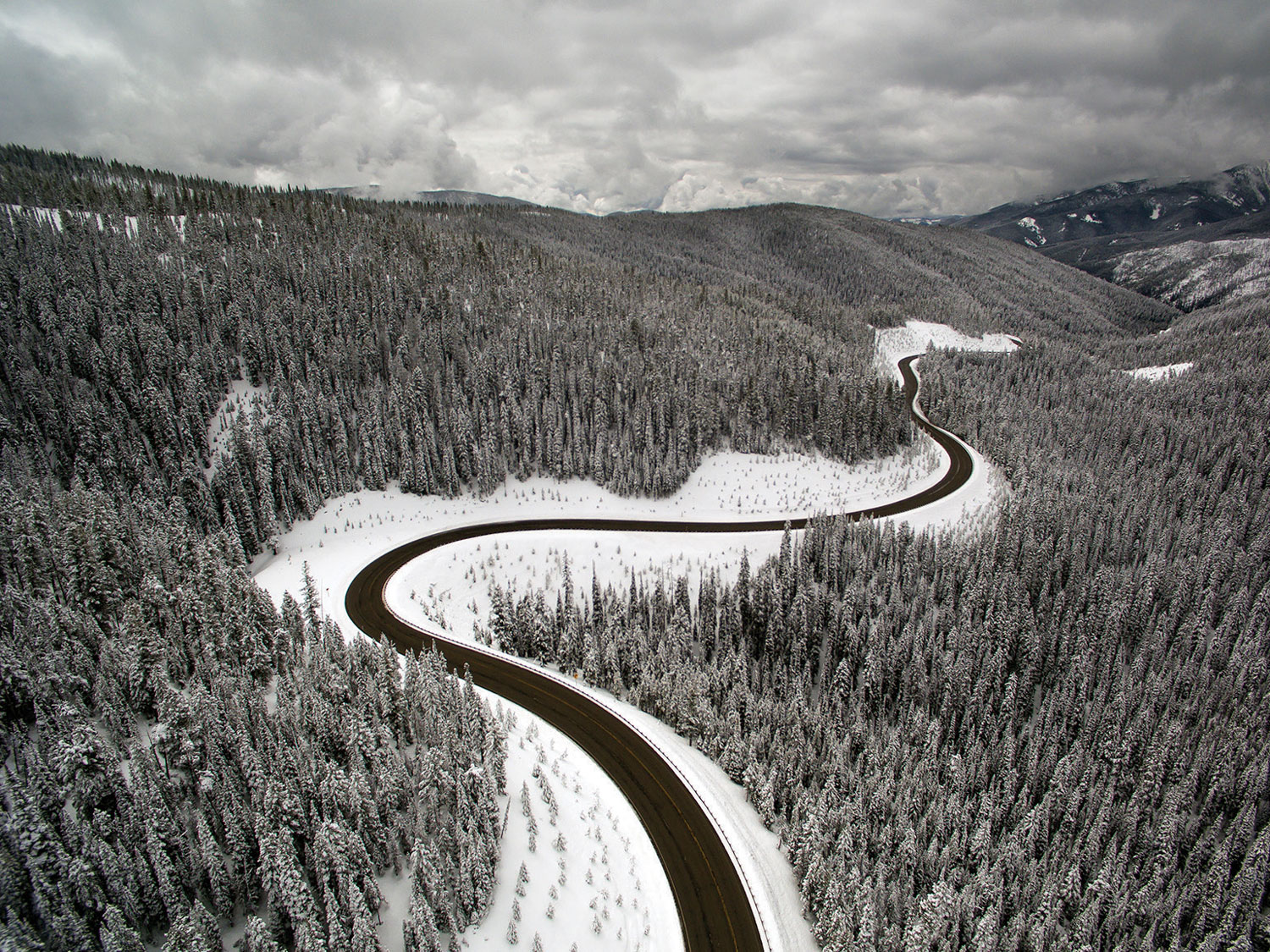 Most of Montana’s scenic Big Hole Valley, which runs from above Dillon to the south, past Wisdom to the north, is situated above 6,000 feet. Photo: Colton Stiffler

The snowy switchbacks of Lost Trail make me grateful for my four-wheel drive, the possession of which Lewis and Clark, crossing here in 1805, would have coveted. The Nez Perce, fleeing U.S. troops in 1877, fared better on horseback. But they were used to Western terrain. Today’s fog stays dense to perhaps 5,000 feet, then as I ascend, drops spookily below me. The views of Piquett Mountain, Horse Creek Pass, and their snow-packed canyons are sobering.

Why did I fear this plateau and its fog? Perhaps because the emotional weather of Missoula — with its faux holiday cheer, sketchy business deals, and elusive love — had me flustered. I was shaken by life’s choices. The sanest seemed the emptiness of the American road.

At mid-morning, I rise to Chief Joseph Pass, halt at a crossroads, and confront a highway sign: “Salmon” in one direction, “Wisdom” the other. Although this is a reference to towns, I interpret it as a choice between sustenance and enlightenment. I turn toward Wisdom. 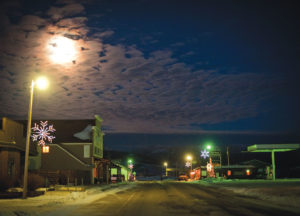 Downtown Wisdom, Montana,
is little more than a crossroads, sprinkled with businesses that remain open through- out the winter.

The Big Hole Valley is gargantuan, running from above Dillon in the south, past Wisdom in the north, and comprising some 100 miles of ranch land, most of it above 6,000 feet. The Big Hole River — a fork of the Jefferson River, named Wisdom by Lewis and Clark — runs nearly that length. Two other forks were dubbed Philanthropy and Philosophy. The names did not stick.

The town of Wisdom, 26 miles from Chief Joseph Pass, is one of the nation’s coldest — logging 55 below zero on December 23, 1983, and enduring 47 days a year at or below zero. The snow east of the pass has drifted 4 feet deep, covering archaic timber fences. The cross-country ski trails near the 7,000-foot mark are visibly tracked. There is not another car on the road.

This is a snow day for me, with all the freedom that implies. William Kittredge wrote in his 1987 essay, “Drinking and Driving,” about such spontaneity: “You touch that warm car, and you climb in for a moment. … And then it’s magic — you’re rolling. … Shit fire, you think, they don’t need me, not today. I’m sick. This is sick leave … this day of freedom will cure your great illness.” I’m not sick, and I won’t be drinking. I have no commitments other than to move south toward home. And I have the time to do that. The Beaverheads, past which I drive, nod their approval. 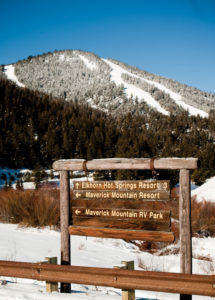 The road is patched with white. I do not speed, recognizing the possibility of ice but also knowing that driving winter roads in Montana is far safer than negotiating them in summer. As Janet Kenny, supervisor of the State Highway Traffic Safety Section has told me, “We see about 47 percent of fatal crashes occurring in Montana in the months of June through September, compared to 22 percent in the November to February time frame. Most fatalities happen on sunshiny, summer days on clear, open roads.”

The sun is shining near the Big Hole Battlefield, but I don’t turn in. Here the Nez Perce, under Chief Joseph and his aide, Looking Glass, were ambushed by Colonel John Gibbon’s 7th Infantry and nearly massacred (89 were killed, mostly women, children, and elders). Afterward, the Nez Perce retreated southeast through Yellowstone National Park, then north through Montana to surrender in the Bear Paws, near Chinook. I have toured the Big Hole Battlefield in summer and found it strikingly mordant. Perhaps it would prove more cheerful under snow, but I doubt it.

It is Christmastime in Wisdom. Electrified stars and snowflakes dangle from utility poles, and lights brighten each window. I enter The Crossing Bar & Grill. I’m its only patron. As Wisdom’s population is less than 100, this does not surprise. The Crossing has evolved from the funkier, working-class Fetty’s, founded in 1932, to something in its simplicity close to gentrified. But its pastries, breads, bagels, and soups are fresh. It’s well they’re homemade, as a sign across the road reads, “Wisdom Market: Last Chance for groceries for 50 miles.” I order chicken noodle soup and a slice of Bumbleberry pie. I consider my next move. 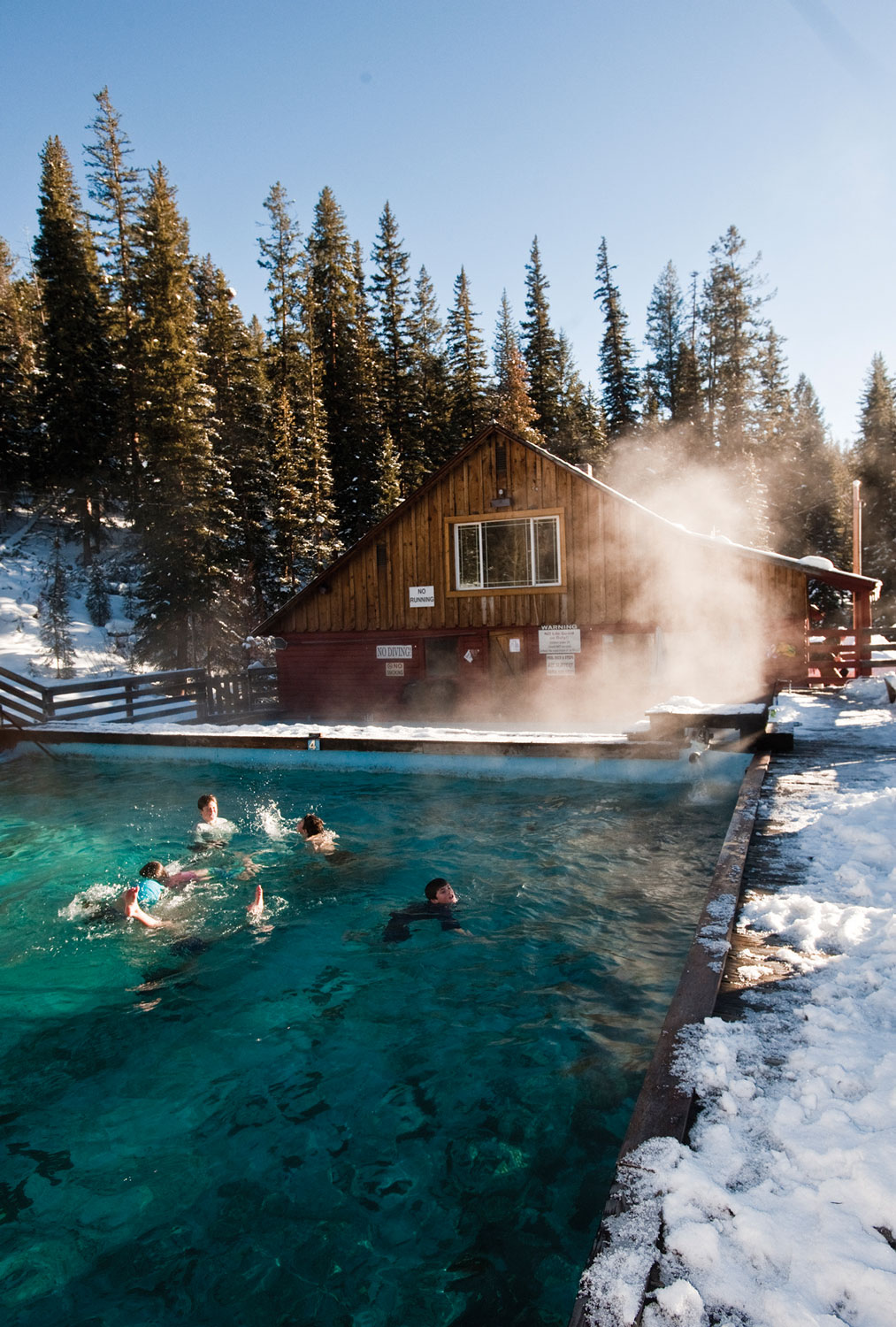 I might drive east to Wise River, take the Pinter Scenic Byway through Elkhorn Hot Springs to Polaris, then head south through Bannack and Dillon. But I’m told in winter that route is closed. Alternately, I could drive to Jackson, head north through Elkhorn, backtrack through Wisdom to Wise River, then east to Butte and home. Unquestionably, a hot spring soak is the ticket.

I recall four-wheeling below Old Chico, in an earlier winter, crashing through deep snow in a huge Suburban, the friend at its wheel shaking her head and beaming as we dodged boulders. Soon after, we rose from the depths of Chico’s pool to watch each other’s hair freeze in ice-sculpted ringlets. I’ve driven Yellowstone’s Icebox Canyon in near blizzards to the Lamar Valley, where snow-coated bison lay in the road like racing moguls. I’ve motored in January from Rapid City, South Dakota, to Fort Robinson, Nebraska, where 15 miles east of Crawford, 200 antelope flowed across Highway 20 like sand in an hourglass. And I’ve traveled at 24 degrees below zero across the badlands between Hardin and Sheridan, when only one freeway lane was open, no trucks ventured forth, and nothing was on the horizon but solitude.

Western writers are drawn to winter driving. Or at least describing it. Thomas McGuane has a splendid blizzard scene in his novel, The Cadence of Grass. Leaving a bar, a character muses “upon the dreadful events that seemed to pile up after closing time on winter nights: schnapps in to-go cups, jumper cables, brutal groping and slurred affections, horrible radio music that was suddenly ‘great.’” And Sam Shepard, who starred in the prototypical Butte film, “Don’t Come Knocking,” wrote this in a letter on Western driving: “Wind still blowing like a banshee, snow coming sideways and the road has an eerie, glassy look to it … suddenly the car is completely out of control. The whole rear end is sliding sideways on a sheet of ice, and I’m heading into the center divider ditch which likely is very wide but very deep with snow. … Up ahead, through the driving snow, I see a patrol car with all its blinkers on, parked sideways in the highway. I pull up next to it and a cop dressed in an icy parka, icicles dripping from his nose, tells me there’s two semi truck and trailer rigs jackknifed up ahead. He says there’s no way through. …” 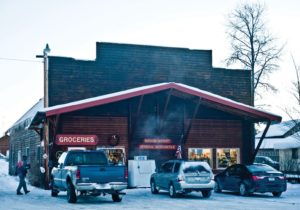 The market in Wisdom is one of the only places to stock up in the valley.

I skip Antlers Saloon in Wisdom and turn left down 278. Here, the Big Hole widens, and but for scattered bailing devices — called beaver slide stackers — the country stretches to the mountains in both directions. I see no cars, and even in the tiny town of Jackson, where Lewis and Clark soaked in its hot springs and boiled their suppers in the 138-degree water, I encounter only one or two vehicles. At 7,400 feet, Big Hole Pass is clear. Energized, I swing north on Route 484, the Pioneer Mountain Scenic Byway, through the ghost village of Polaris, past the Maverick Mountain ski area, up a winding lane to Elkhorn Hot Springs.

At 7,385-feet, the terrain is subalpine. And Elkhorn’s rustic lodge, with its café, cabins, and hot pools, is like something from Hansel and Gretel. If I’d brought skis, I could slip-slide down its Nordic trails, or backtrack to Maverick Mountain. Instead, I park by the hot springs, pay Elkhorn’s modest fee, change, and ease into the hotter pool.

Kittredge wrote of soaking here with a lover, “snow falling into our mouths. Snowball fights in the water. Rowdiness. … And the next day, sweet red wine in the snow. …” This afternoon, a few parents with country-looking kids do the soaking, and I stare at the cobalt sky. Something is missing. If enlightenment is to come, it will arrive on the road. 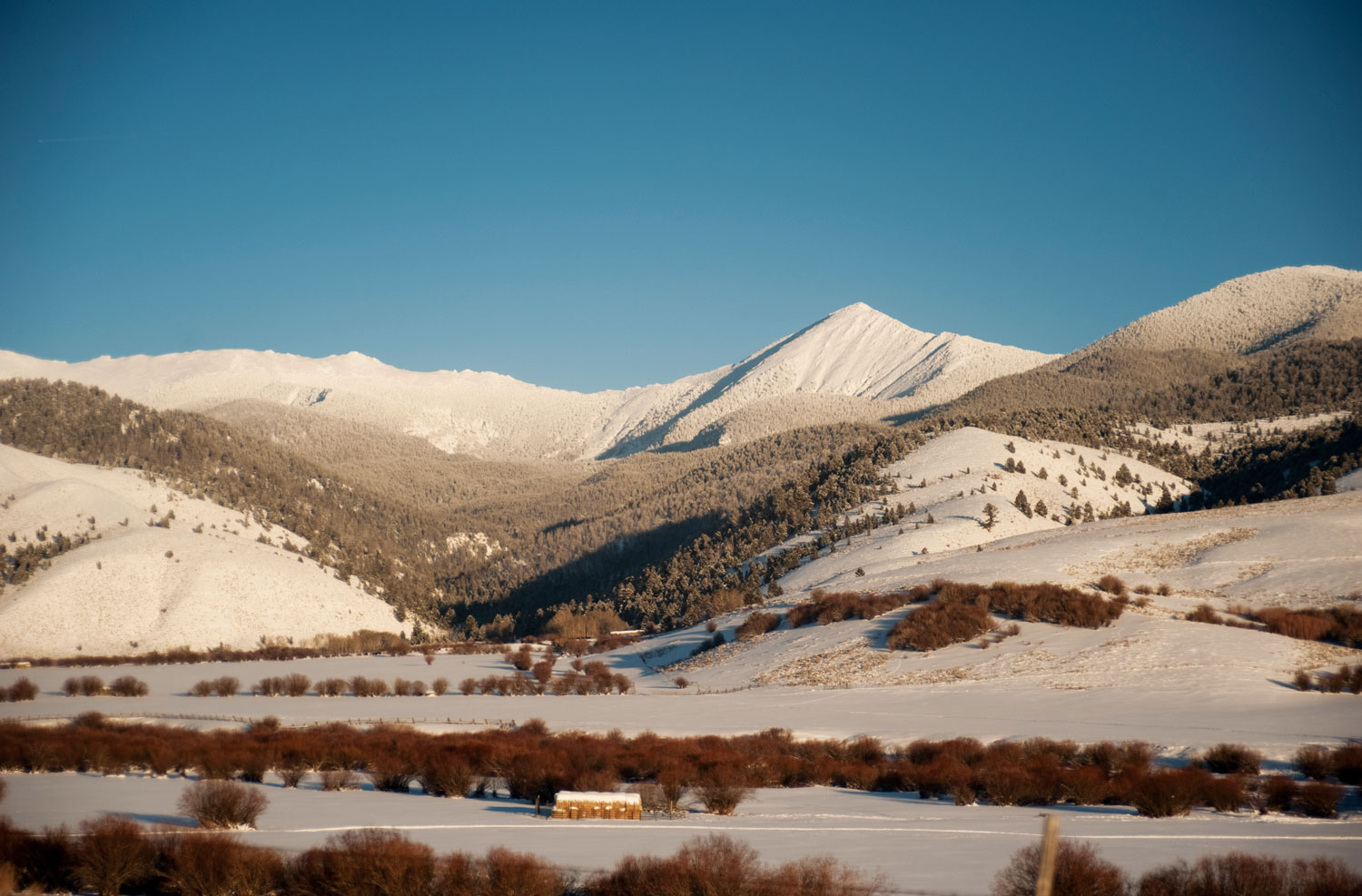 Soon I’m back on 484 following the Wise River south, past 11,000-foot-tall mountains, down through what seem to be clouds, and on a cushion of white. Driving here, through forests and across meadows, is like skiing on rubber. Various creeks flow to my left. I chirk up. The music is Bob Dylan’s album, “Christmas in the Heart.” And with “Must Be Santa,” I wonder if a sleigh pulled by reindeer would improve my traction. Or transport me above the fray.

I swing north through the valley, Dylan’s rasp in my ears, and somewhere past Jackson I have what only can be described as an emotional whiteout. Everything is indeed white. Snow falls, the mountains are visible as if from behind a beaded curtain, and the blacktop is dusted with frost. In a full whiteout, earth is indistinguishable from sky and vertigo occurs. One sits or one falls. I already am seated, but it’s as if I’m in a fighter jet, climbing. A truck follows, its headlights in my mirrors, but this does not ground me. A friend in Montana who loved winter has died; an actress who would rather walk her dogs by the Yellowstone in below-zero weather than sip a fruit punch in Key West. A friend who in summer comforted herself with paintings of snowy panoramas and kept the air conditioners humming seven months of the year. A friend who slept among the Sioux in a tent during the coldest nights at the Dakota Access Pipeline protest and who, in the first warm month of this year, swallowed every pill in her house and perished. A friend who, in movie roles, had soared above the Manhattan cityscape with Superman, shared a kiss, and lived happily ever after. 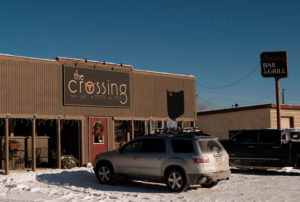 The Crossing in Wisdom is the Big Hole Valley’s premiere eatery.

Back at Antlers Saloon I reconnoiter. Its pizza is tasty, and four or five patrons converse below the mounted geese and deer heads. Kittredge wrote of this bar that, “There is a stuffed quail on the stand with its head torn off. All that’s left is just a little wire sticking out of the neck. What fun that night must have been.” Tonight, Yuletide decorations abound, and I’m reminded of a long ago Christmas in Livingston when 24 inches of snow fell. I spent that afternoon digging my car out, then driving 12 miles south for a party at Margot’s that more than saved the day. Twenty guests celebrated, and I wrote later that her tree lights spilled onto the snow, “with the brilliance of distant stars.”

A bit later, I will leave Antlers to follow the Big Hole 23 miles east, on slippery roads, through a narrowing canyon to the Wise River Club, where over Cokes I’ll recall, in a past winter, two-stepping across its concrete dance floor to Merle Haggard’s “Big City.” I’ll push on, over black ice and snow, to Butte. There I’ll remember Margot at the M&M bar in the late fall of ‘96 — after an appointment with her psychopharmacologist in Missoula — brandishing the 3,000-page Physician’s Desk Reference and assuring drunks, “It’s all right here. It’s in the book!” Next morning, sobered, I’ll creep toward Livingston. But for now at Antlers, in the heart of Wisdom, I toast a mounted goose and grin.