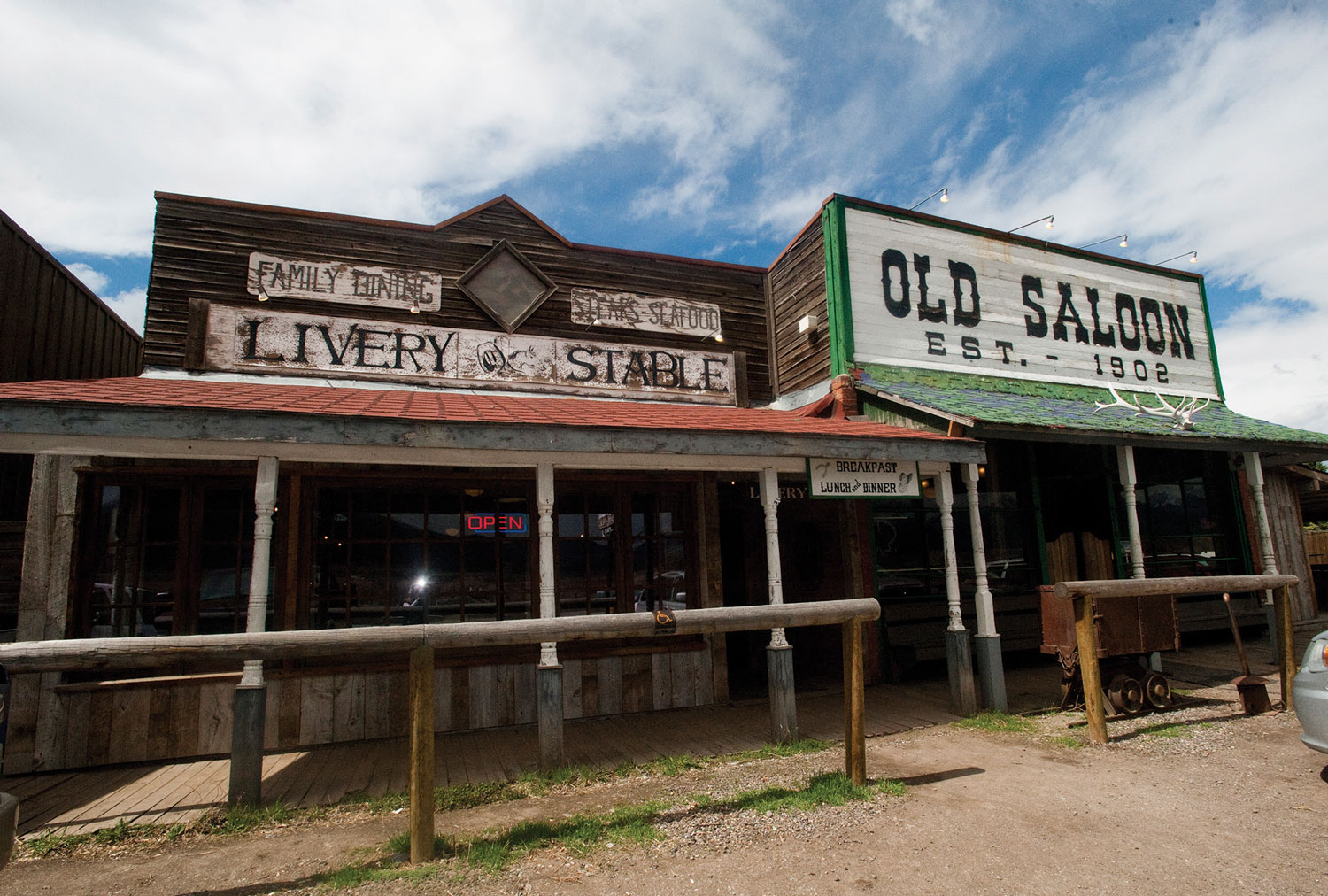 For more than a century, the Old Saloon and Livery Stable have been attracting road trippers on Highway 89, south of Livingston, Montana, to belly up to the bar and grab a bite to eat.

13 Jun Dining Out: The Old Saloon

It was spring in the early 1990s when I first stumbled into the Old Saloon with friends. We were making our way back through Paradise Valley to Bozeman, Montana, after a morning spent soaking in the Boiling River. I’d just turned 21, and I bellied up to the bar to order beers for the group. 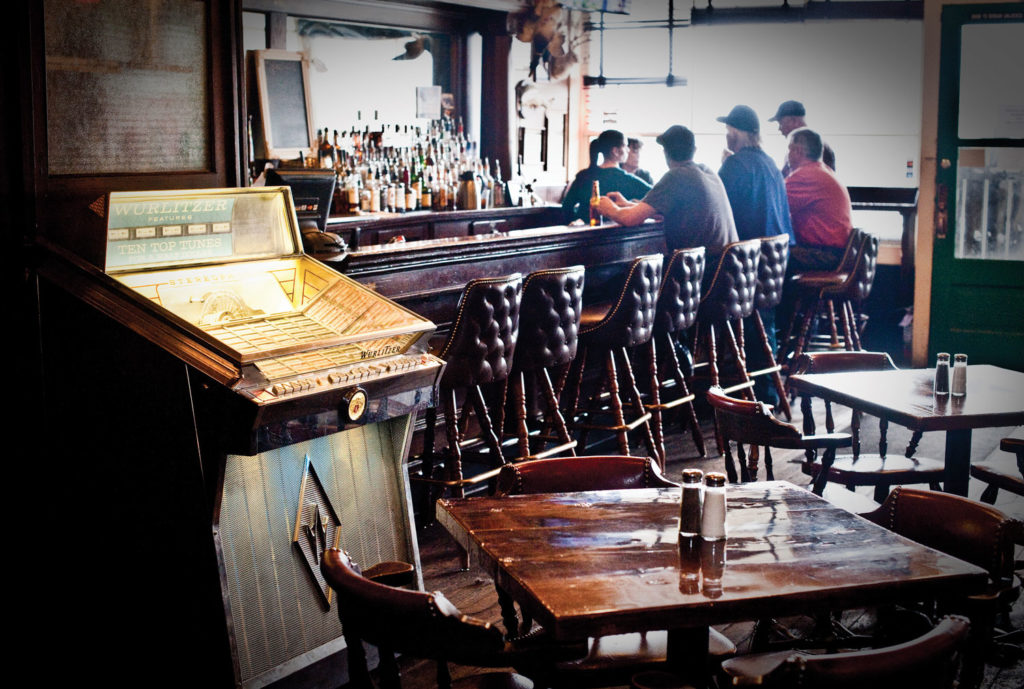 After an extensive renovation in 2015, the Old Saloon remains a favorite watering hole for locals and visitors.

“See your ID?” said the gruff barkeep. I scrounged my driver’s license from the back pocket of my Levi’s and slid it across the worn wood bar to him. He looked at it skeptically, glancing at my baby face and back to the date on the license. “Looks like you’re of age to get drunk,” he said, slapping the plastic card back to my edge of the bar. “First one’s on the house.” 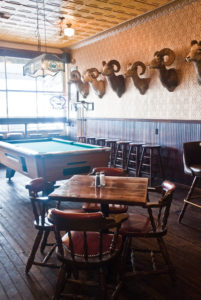 The “double grand slam” of Bighorn Sheep mounts hang on the saloon wall as a tribute to hunter and longtime area resident Dr. Robert Kahle, the grandfather of owner Brett Evje. 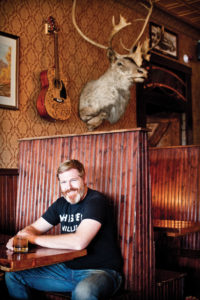 Owner Brett Evje, along with his partners, bought the Old Saloon for its authentic Montana charm.

With the slightest bit of flair, his right hand clinked two shiny shot glasses onto the counter. With the other, he reached to the back bar for the bottle of Jack Daniels. He poured the brown liquid generously into the glasses. “There you go, missy.” He raised his glass, nodded, and looked me in the eye from beneath his linty black cowboy hat. “Drink up.”

I did. It was the first time I’d had a shot of whiskey, and it burned from the first gulp. Bolstered by the salty bartender’s generosity, my friends rallied and ordered a full round of shots for all five of us. We stayed for hours, as I recall, the only patrons in the place on that early Sunday afternoon. The only other thing I remember, as it turns out, is that whiskey makes me cry.

“Everyone I meet has an Old Saloon story,” says owner Brett Evje of the iconic roadside bar and eatery in Emigrant, Montana.

Some of the stories are more colorful than others, ranging from celebrity capers with Peter Fonda and Sam Shepherd to domestic squabbles. Since the Old Saloon opened in 1902, it has witnessed a lot of changes in this valley south of Livingston. As a fifth-generation Park County community member whose grandfather homesteaded in nearby Cinnabar, Evje has made his own memories here over the past 20 years. But what he and his three business partners — architect Larry Pearson, contractor Chris Lohss, and interior designer Bill Peace — all love are the things at the Old Saloon that have stayed the same. 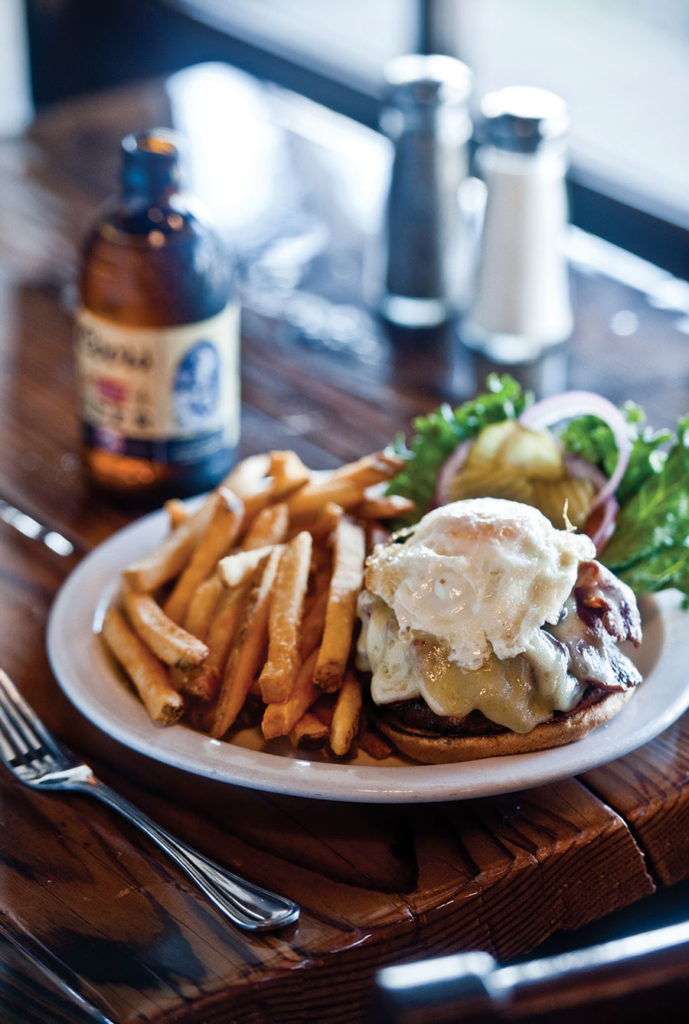 Serving up a classic Western menu, with break- fast served all day, plus steaks, chops, and salads for lunch and dinner, the Old Saloon Burger, topped with a fried egg, is the most popular menu item.

“I love the mix of people,” says Evje, who is also a partner at Plonk in Bozeman and Missoula. “It’s got character and is really one of the last authentic bars in the state where you find tourists, hippies, agricultural guys, and miners in a saloon together.” 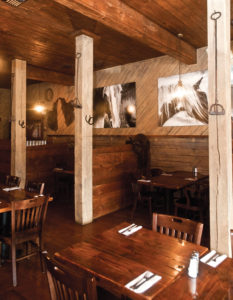 Connected to the saloon, the Livery Stable is a horse barn that was dragged down the hill in the 1970s and converted into a restaurant by a previous owner. For
the remodel of the dining room, interior designer Bill Peace, of Peace Design, chose reclaimed wood and graphic horse photography by Audrey Hall to pay homage to the original roots of the building.

That love for real Montana prompted the partners to purchase the classic bar and adjacent Livery Stable steakhouse in 2016. They expected to renovate the dilapidated structures, but once the deal was sealed, the group realized the extent of repair was much more than they’d anticipated. Upon inspection, they found that the bar’s drainpipes weren’t connected to a complete plumbing system, but instead spilled onto the ground beneath the building. They replaced the electrical and plumbing systems, added central air and heat (the previous heat source was an old wood-burning stove), and reconstructed the lathe and plaster on the walls and ceiling.

Despite the requested repair, the false-front façade and the boardwalk porch called to the group. Originally, the watering hole was built as an outpost to service travelers who rode the newly constructed Northern Pacific spur line from Livingston to Yellowstone National Park, since it was the midway point between the two destinations. It burned down but was rebuilt in 1907 by Abe Armstrong, who ran the saloon until Prohibition shut its doors. It remained closed until Abe’s son, Elmer, re-opened it in the 1960s and dragged an old barn from a nearby pasture to add the Livery Stable-turned restaurant.

“The historical context of the Old Saloon is so important to Paradise Valley,” says partner Bill Peace of Peace Design. “We wanted to retain the authenticity and history, but clean it up so it would feel comfortable and approachable again.” 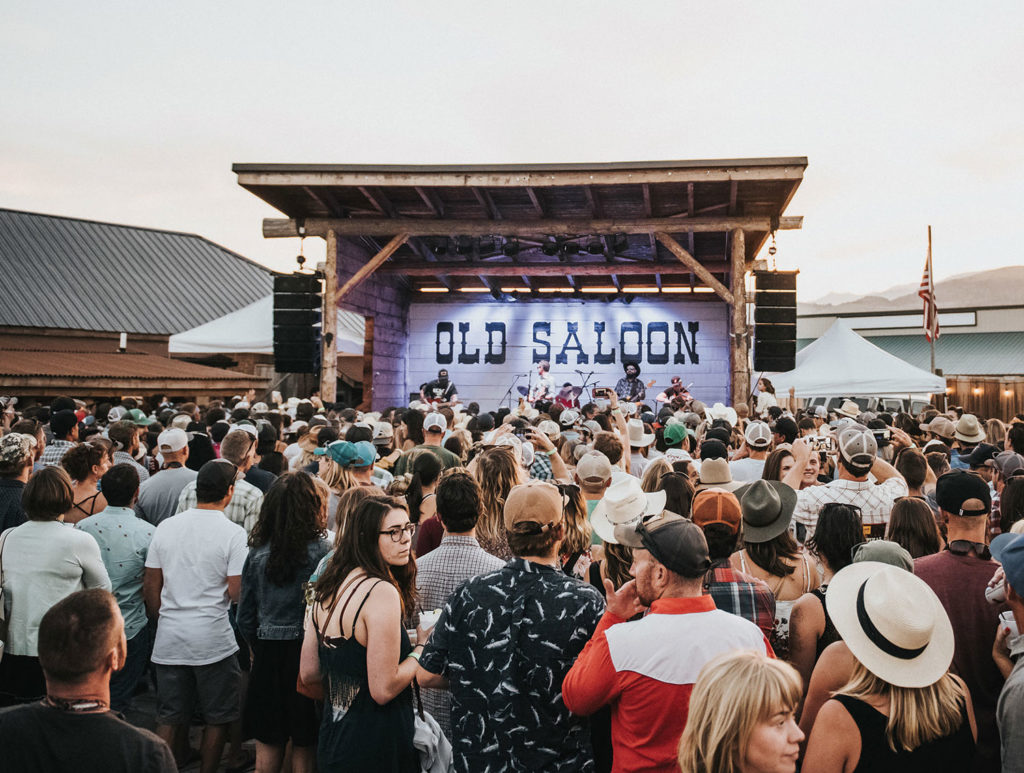 During the warmer months, guests gather for outdoor country music concerts with views of Paradise Valley.

For instance, the original ceiling was replaced with pressed tin, appropriate for the era in which it was built, yet Peace matched the yellow nicotine stain that had accumulated over decades with a contemporary paint color. The walls were covered in a Victorian wallpaper, but the taxidermy collection remained central to the décor, including the impressive “double grand slam” bighorn sheep trophy mounts that were harvested by Evje’s grandfather, Dr. Robert Kahle. “There couldn’t be a better place for it to be,” Evje says. 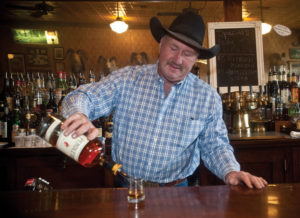 During reconstruction, the surprises continued. The construction crew was investigating a sagging point in the ceiling of the kitchen by cutting into the surface, and was shocked when a feral cat leaped out of the opening and ran from the building. The discovery took the project to another level as Evje realized that the entire restaurant kitchen needed to be stripped to its studs and completely replaced. What started out as a “fun side project” quickly spiraled into a much bigger investment of time and money. But once they re-opened, the effort was worth it.

The next step was Evje’s vision for the out-of-the-way destination: He saw it as an old-time dance hall with a good menu as an attraction, serving breakfast, lunch, and dinner seven days a week. And now, on Saturday nights, the billiards table is moved out of the main bar, juicy burgers are served, and live bands play. Limited by space inside, the team built an outdoor stage and service bar to host a country music series during the warmer months. Moving into its third summer season, the concerts regularly sell out and attract over 1,000 attendees to each event with views looking across the Yellowstone River toward Emigrant Peak. 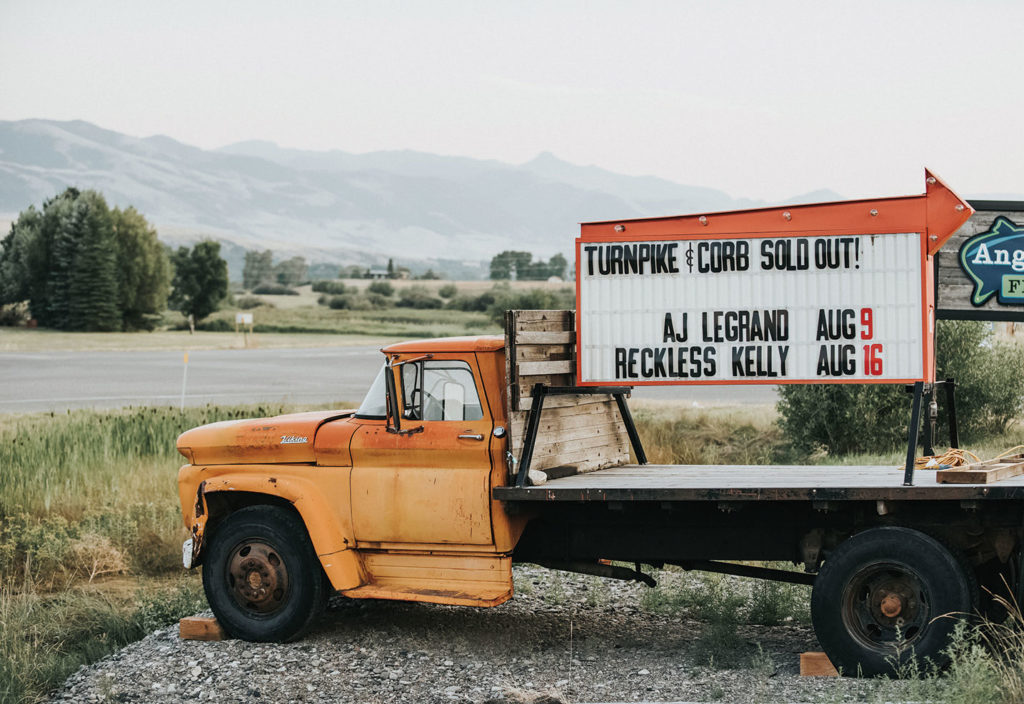 And the most popular drink at the Old Saloon is still whiskey, says Evje, “It’s hands-down a shot of Pendleton poured by Cowboy Mike,” he adds. It’s possible that he is the same seasoned bartender who served me that shot so many years ago. Despite the remodel and new energy, there are a lot of things at the Old Saloon that just haven’t changed.