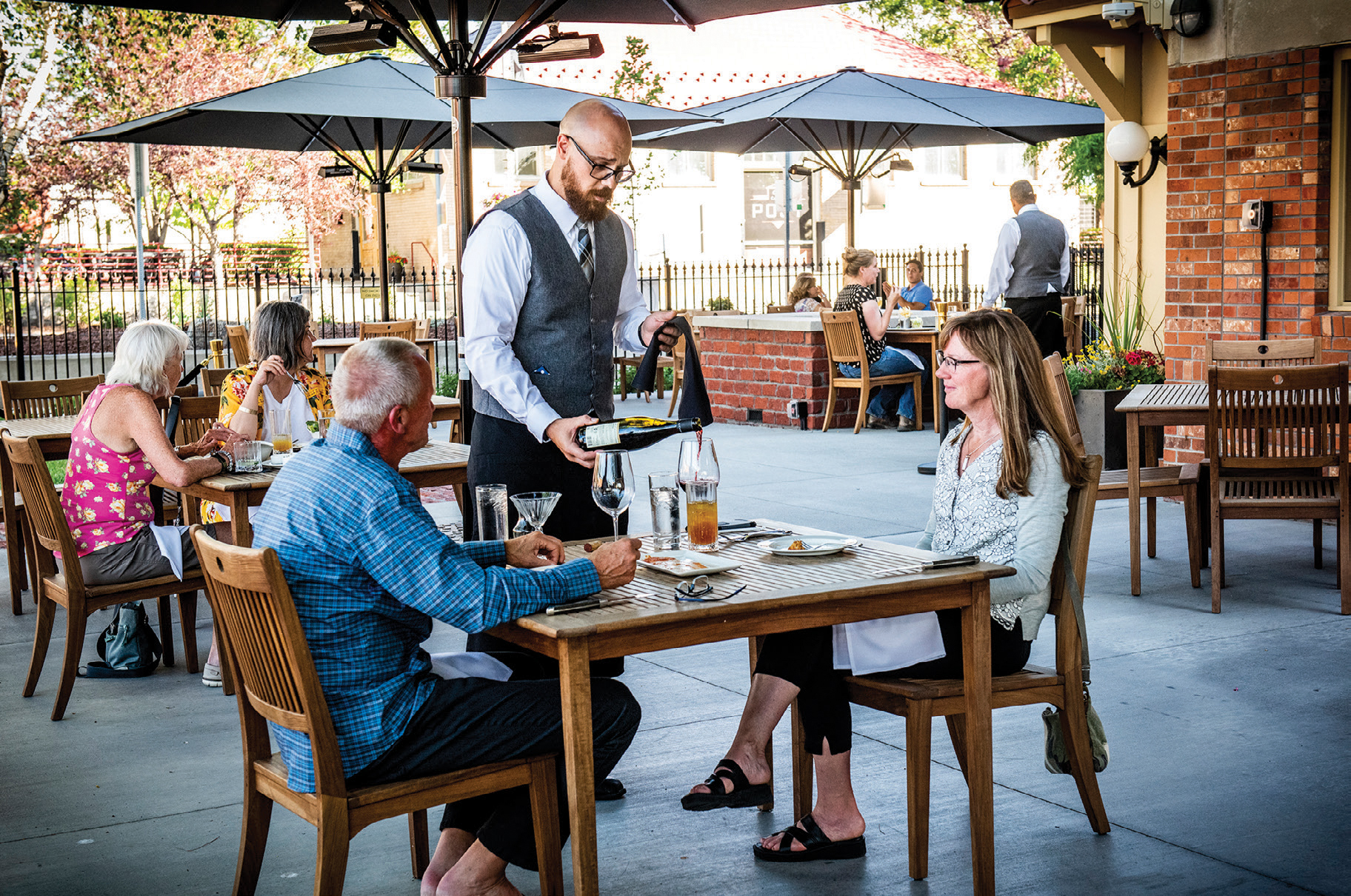 The spacious patio at Buffalo Block is the perfect setting for a summer night out.

You might eat the best steak in Montana at the Buffalo Block Prime Steakhouse in Billings. It depends on how you like your meat, but at this establishment, most steaks are aged for a month and some cuts are dry-aged for another 40 days. The result is a mouthful of succulent, complex flavors that are hard to forget.

That was my experience recently when my husband and I ate in the formal dining room of the Buffalo Block at the Rex. It was a mellow Monday in the summer when we bypassed a cocktailing crowd that was sitting near the fire pit on the new patio, and we opted for an elegant meal inside. We were seated at a center booth with blue velvet benches and a center-stage view of the open kitchen. 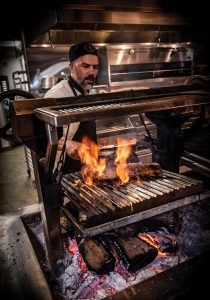 Throughout the evening, I watched as executive chef Austin Stewart expertly worked the Argentinian wood-fired grill. He added logs of blue oak to the fire periodically, adjusted the height of the grill, and cooked our ribeyes to medium-rare perfection. “I’m a Prime meat chef, that’s been my experience for most of my career,” Stewart says. “That’s why the vision of Rick and Nicki Larson wanting to bring back the heyday of a steakhouse was the perfect fit for me.”

It’s no exaggeration to say that Montana is known for beef. To that end, a restaurant that calls itself a steakhouse is making a bold statement. But the Buffalo Block backs up its claim with straightforward classics that include Wagyu sirloin, filet mignon, New York strips, ribeyes, and, of course, prime rib. Every steak offered is USDA Prime cut, which accounts for only 5 percent of high-grade beef in the country and is known to offer the most premium flavor. House-made steak sauces, such as Béarnaise and a bacon, white truffle, and gorgonzola cream, can be added to personalize a plate. Other additions to enhance the meal range from Brussels sprouts to lobster mac and cheese. 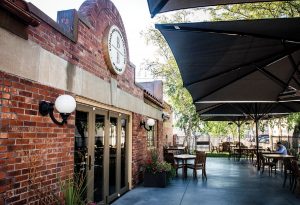 The renovated Buffalo Block restaurant was named for the vintage bricks that pepper the historic building and sidewalk, which are remnants of the pavers commonly used in the early 1900s throughout the West.

In the early stages of opening Buffalo Block, Stewart worked hand-in-hand with general manager Mitch Fox to refine a well-rounded menu that rises to the steakhouse call as much as it does to the fresh seafood-craving crowd. It seems as though all of his past experiences in the kitchen have prepared him for this move to work with owners Rick and Nicki Larson. And for Fox, it’s his dream job. “I feel like I won the work lottery by connecting with the Larsons,” he says. “They are active and passionate owners.” 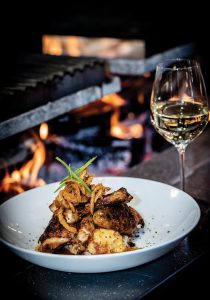 The Buffalo Block’s single bone-in pork chop is smoked before it’s grilled, then finished with a crispy potato and spiced bacon crust with an apple bourbon and stone-ground mustard glaze and served with mashed potatoes.

Stewart and Fox seem to be the perfect combination to set the tone for this new endeavor. Both had developed corporate and boutique restaurant backgrounds that led them to launch Buffalo Block with excitement in the fall of 2019.

Although Stewart graduated with a degree in architecture from his home state of Ohio, he paid for college by cooking in restaurants. After less than a year working behind a drafting desk, a friend offered him the executive chef position for a startup restaurant called Lager & Vine in Hudson, Ohio, and Stewart leapt at the opportunity. Serving chef-driven small plates paired with beer, the gastropub added a glimmer to the food scene in the greater Cleveland area. 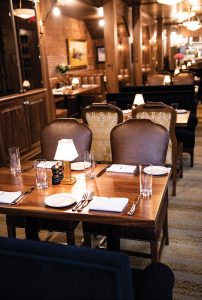 Architect Dennis Depmeier, principal of the firm 2north, and interior designer Jeremiah Young, of Kibler & Kirch, teamed up with the California-based firm Synergy Design to create a luxurious and inviting high-end atmosphere that features rich, decadent textures like leather and velvet.

Stewart then relocated to Florida, where he was a chef at The Capital Grille, a seafood and steakhouse chain known for its consistency and quality in fine dining. His wife had attended Rocky Mountain College in Billings and hoped to one day return to Montana. She knew that Stewart was ready for a career change, and when she saw the job opening for an executive chef at a steakhouse in Billings, she set the plan in motion for their family.

Fox, on the other hand, has worked in restaurants since he was a teenager, gaining expertise at all levels. Most recently, he managed five restaurants for Devil’s Thumb Ranch Resort & Spa in Colorado. Before that, he worked for King’s Seafood Company in California and a Michelin-star restaurant in Los Angeles. The call to launch the Buffalo Block seemed like a way to bring all that experience together on a scale that would challenge him, but also allow him to spend more time with his wife and three kids. 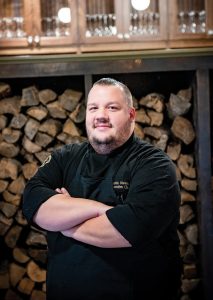 The night I dined here, Fox moved effortlessly from table to table, giving personal attention to each customer. He offered suggestions about the restaurant’s wine selection and handcrafted Prohibition-era inspired cocktails. His presence made dinner even more pleasant with each course. “My service philosophy has always been ‘guest-first,’” Fox says. “We try to go above and beyond to make sure guests feel that they are having a special experience, as if they are the only ones in the restaurant.” 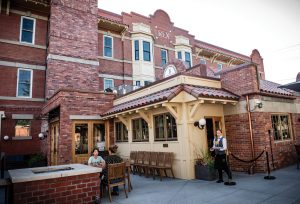 The patio on Montana Avenue has been a popular summer hangout for Magic City residents for decades, but the remodel greatly expanded it.

The historic Rex Hotel was built in 1910 and is on the National Register of Historic Places. It’s an anchor in the ongoing restoration of Billings’ Montana Avenue, an area that holds claim to stories of both the territorial West when Will James, Buffalo Bill, and Calamity Jane bellied up to the bar, and the current narrative of a thriving downtown in Montana’s largest city. The bar held its own during Prohibition, and later became a favorite local restaurant over three decades until it abruptly closed in 2017. The Larsons stepped in to restore a piece of Billings that they’d come to love.

Hoping to re-create the special dining experiences the couple has had through years of travel, the Larsons recruited an A-list team to renovate and reshape The Rex. Local architect Dennis Deppmeier, principal of the firm 2north, and interior designer Jeremiah Young, of Kibler & Kirch, teamed up with the California-based firm Synergy Design to cultivate a luxurious and inviting high-end atmosphere. 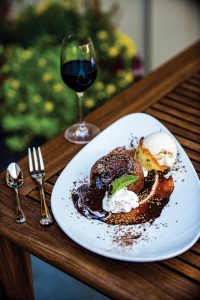 The Buffalo Block’s Chocolate Lava Cake is made with Belgium dark chocolate and is served with house-made chocolate almond ice cream in a delicate Swiss meringue.

The exquisitely renovated Buffalo Block restaurant was named for the vintage bricks that pepper the historic building and sidewalk, remnants of the pavers that were commonly used in the early 1900s throughout the West. The Larsons’ granddaughter coined the name one day while walking into the building before the new restaurant opened. Naming it the Buffalo Block seemed like the perfect way to honor the past while marking the future for an experience that food lovers won’t forget.