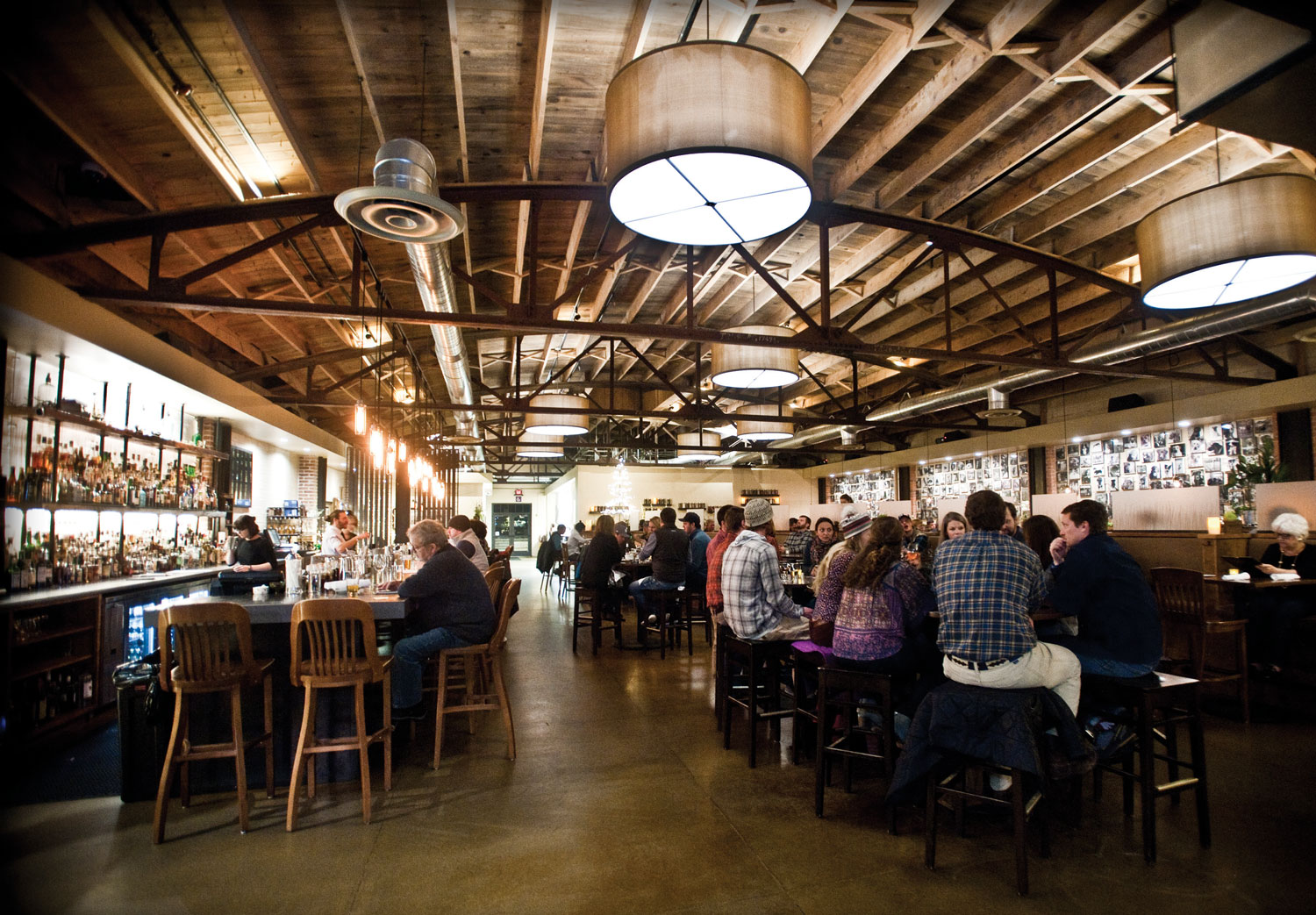 As a gathering place in downtown Bozeman, Open Range features a craft cocktail bar and seating options that range from social to intimate

A Bozeman steakhouse prioritizes great food and a classic atmosphere

If there is one slogan that best describes the cuisine at Open Range in Bozeman, Montana, it’s: Keep it simple. 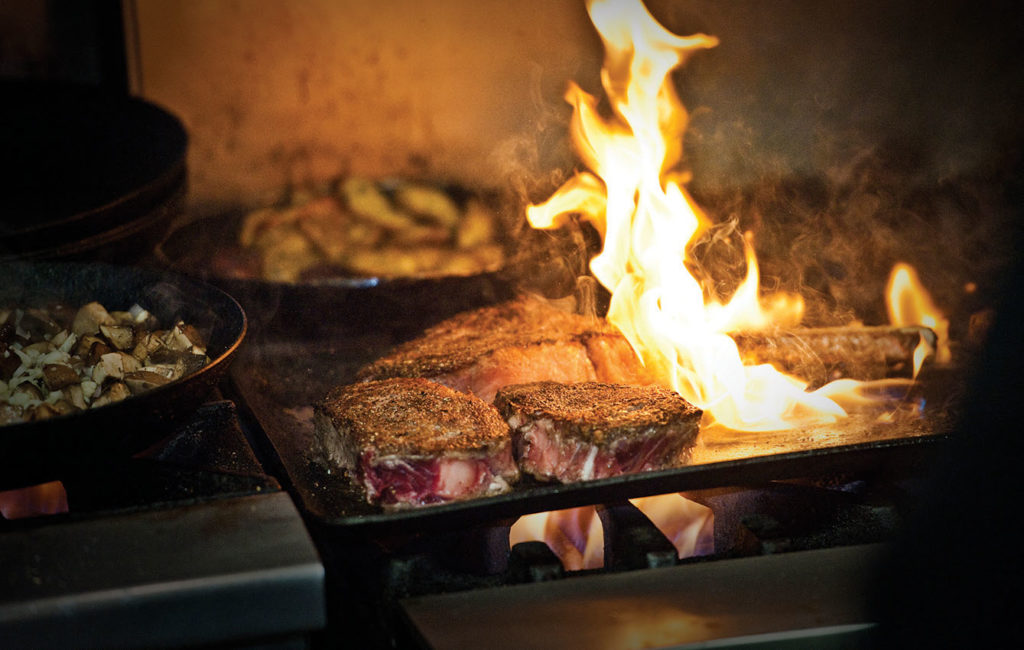 The kitchen cooks each steak to order on a high-heat, cast iron plancha (flat griddle) to seal in the juices.

Whether you’re fresh out of a drift boat on the Madison River or gussied up for a night on the town, your version of Montana casual is perfectly acceptable at this steakhouse. The expansive Main Street anchor offers a classic atmosphere, and the food is worth the wait from the river takeout to the table. 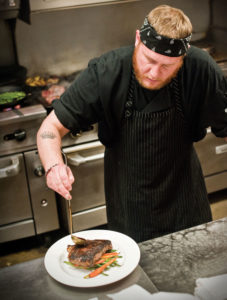 And it’s simple, because at Open Range the focus is on serving quality ingredients that taste good. “We’re not out to change the world,” explains executive chef Cory Martin. “We’re a steakhouse, and we specialize in serving the finest cuts of meat in Bozeman.”

To that end, the menu centers on beef and bison, with a smattering of fresh fish options, such as salmon, classic shrimp cocktail, and trout. Nothing offered is fussy — no flowery garnishes or foam sauces. Everything is made from scratch, the portions are hearty, and the customer service is personal.

“We just wanted everyone to feel comfortable when they walked into this restaurant,” says owner Jay Bentley, who launched Open Range with his wife Mary in 2013. A well-known local personality, Jay has made his mark as a chef for eateries since the 1970s. Each of the four he has owned has successively improved Montana’s restaurant scene. First there was Bentley’s in Big Sky; then most famously, The Continental Divide in Ennis during the 1980s; followed by a renovation of The Mint Bar & Cafe in Belgrade during the 1990s; and finally, Open Range. 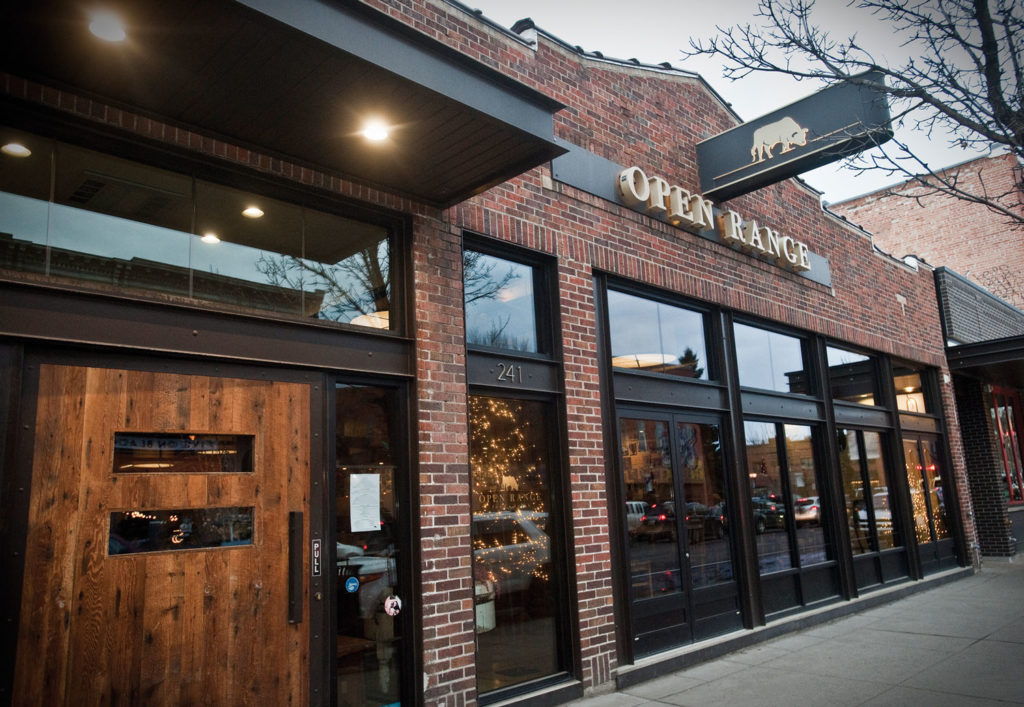 Owners Jay and Mary Bentley restored this 6,200-square-foot space on Bozeman’s historic Main Street, turning it from an industrial print shop to a high-end steak house.

His cookbook, Open Range: Steaks, Chops & More From Big Sky Country, published in 2012 and co-authored by Patrick Dillon, remains a staple in the libraries of carnivores. Currently in its fifth printing, its popular reception prompted the moniker for the Bentleys’ Bozeman restaurant. It’s the perfect play on words, describing Montana’s expansive landscape and what they cover in the restaurant’s kitchen.

With a vision for a reinterpreted Montana steakhouse, the Bentleys restored a historic industrial space on Bozeman’s Main Street that once housed a car dealership and later a print shop. They drew on Mary’s professional interior design background to meet the challenge in this structure: 6,200-square-feet of volume. Its high ceilings and exposed steel trusses were part of the building’s charm, but also presented the dilemma of feeling austere. While the concrete floors and brick walls were chic, in a space of that size, the risk was that the room would be too loud for diners. 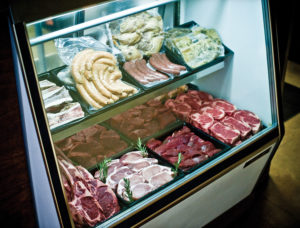 The Butcher’s Case displays the daily cuts of meat and char- cuterie. Many customers select their own steaks for dinner.

Mary softened the space with a second level section that features cozy leather booths. Throughout the room, a nature-inspired color palette and soft lighting offers more intimacy. Extensive sound proofing was added to keep the noise to a minimum, and the long cocktail bar was designed with backlighting to highlight the extensive liquor collection used for their signature handcrafted cocktails. But the biggest success in terms of design, by Mary’s estimation, is the “Dog Wall.”Lining most ofthe eastern length of the restaurant is a collection of black and white, 8-by-10-inch photos depicting the pets of customers and friends. It’s a memorial to the Bentleys’ beloved dog Pal, but also a point of pride for Bozeman. “Bozeman is a dog town,” explains Mary, “and if there is anything that truly reflects what brings people together, it’s the love for our dogs. I thought it was the best way to let Bozeman know that this is their place.” 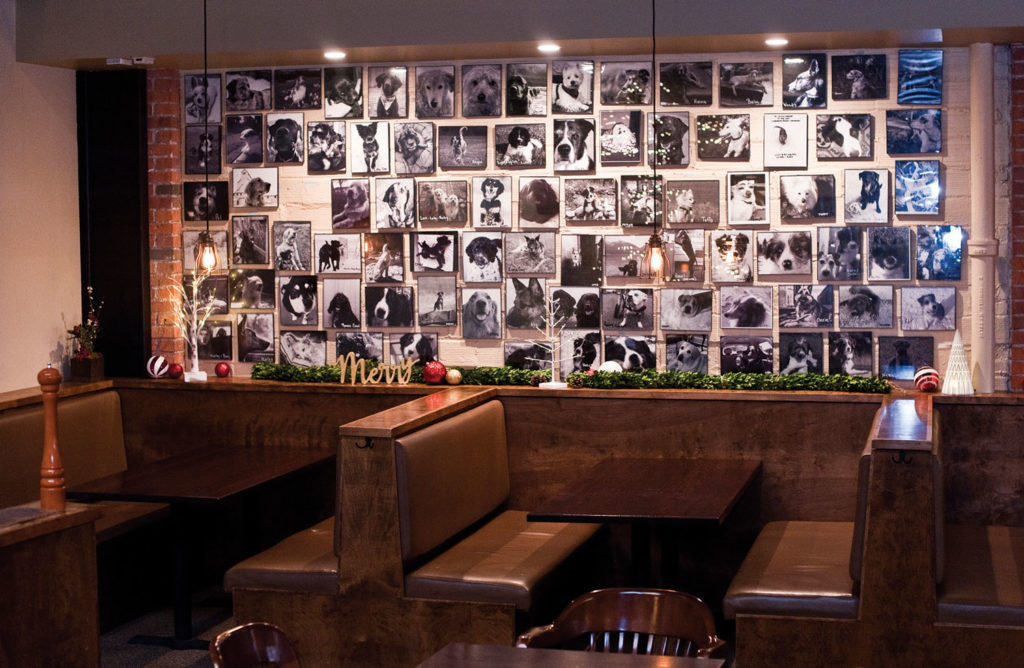 The Dog Wall displays black-and- white photos to honor the pets of custom- ers and friends, and to pay homage to Bozeman as a “dog town,” according to Mary Bentley.

While Jay’s influence remains strong with his staff, Mary runs the restaurant’s day-to-day operations with the help of general manager Jared Crune and chef Martin. The Bentleys credit their staff for the business’ success in a competitive restaurant market. “Our staff is knowledgeable, our food is consistent, and our goal is just to do everything right,” says Jay, in his characteristic matter-of-fact manner.

Martin agrees. “I’m a meat-driven chef,” he states. Previously, Martin worked with Jay at The Mint, gaining culinary skills from the bottom up over the course of a decade. Incorporating Jay’s own version of cast-iron cooking “a la plancha,” Martin learned the art of searing meat with the most basic ingredients to preserve the natural flavors. The secret, he says, is the heat from the skillet (kept between 800 to 1,000 degrees Fahrenheit) that seals the natural juices of the meat. 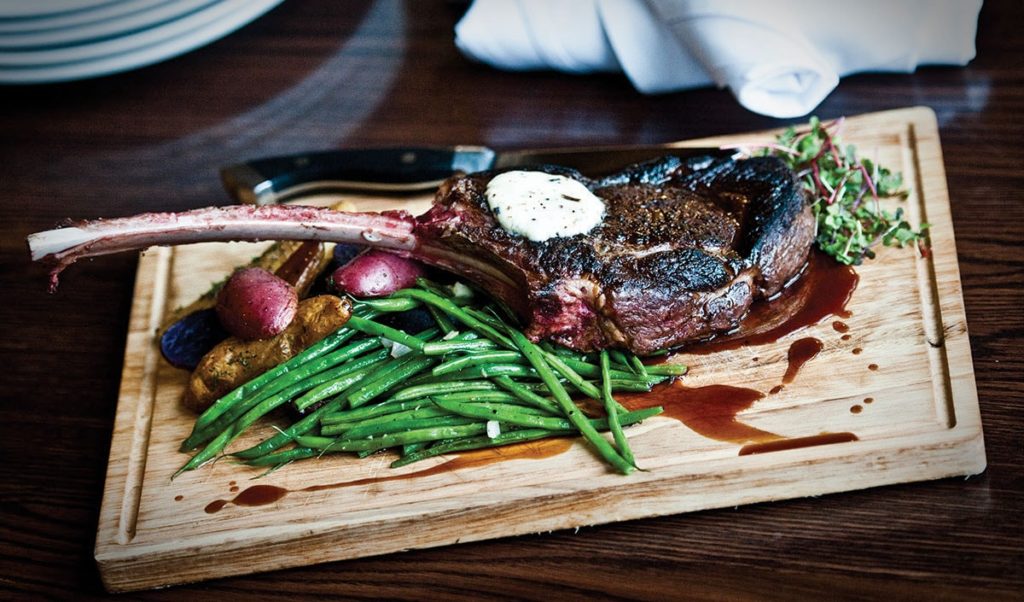 Martin and his team spend four to five hours a day butchering meat for the restaurant. The custom cuts are always fresh, never frozen, and are displayed in the butcher’s case next to the open kitchen at the back of the restaurant. Guests are welcome to select their own cuts and can choose from the daily selection of U.S. Grade-A beef, bison tenderloin, and a variety of housemade charcuterie. The added benefit of butchering the restaurant’s meat allows Martin to use the scraps to be ground as burger for the menu. Some say the burger — served open-faced on a house-baked bun with pickled red onions, garlic herb mayo, bacon, lettuce, and a choice of cheese — is the best in the area. Open Range prioritizes low to no food waste, and uses scraps to make sausage, which is served on the Ploughman’s Board along with artisan cheeses, and the Asado for Two entrée — a rustic showcase that offers a ribeye steak, confit duck leg, roasted potatoes, chimichurri sauce, salad, and bread. 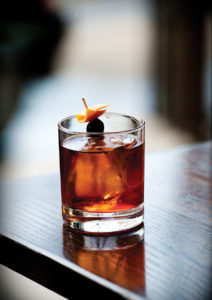 With 160 seats, the restaurant is open seven nights a week and the favorite dinner item by far is the beef tenderloin. Martin estimates that steaks make up 75 to 80 percent of the food they serve, keeping with the national trend that when Americans go out for dinner, beef is still the number one item they order. At Open Range, the other big seller is the 28-ounce Bison Tomahawk Steak, a bone-in, thick-cut ribeye that is topped with truffle butter, sautéed vegetables, and roasted potatoes on a rustic cutting board. It’s a meal best shared, but Martin swears there are customers who can eat the whole portion.

While meat plays center stage at Open Range, there are other options, such as the cast iron chicken, appetizers, and a selection of decadent side dishes that could stand as a meal on their own. The creamed spinach and fried Brussels sprouts are delicious, and the mac and cheese is topped with bacon, chives, and sharp cheddar cheese.

“We’re just trying to do the classics really well,” says Jay, who is proud that Open Range has become a local favorite. At 77, he hints that this might be his last restaurant. There are easier ways to make a living, he concedes, adding with a hearty laugh, “But I’m in it for the endless supply of food and wine!”