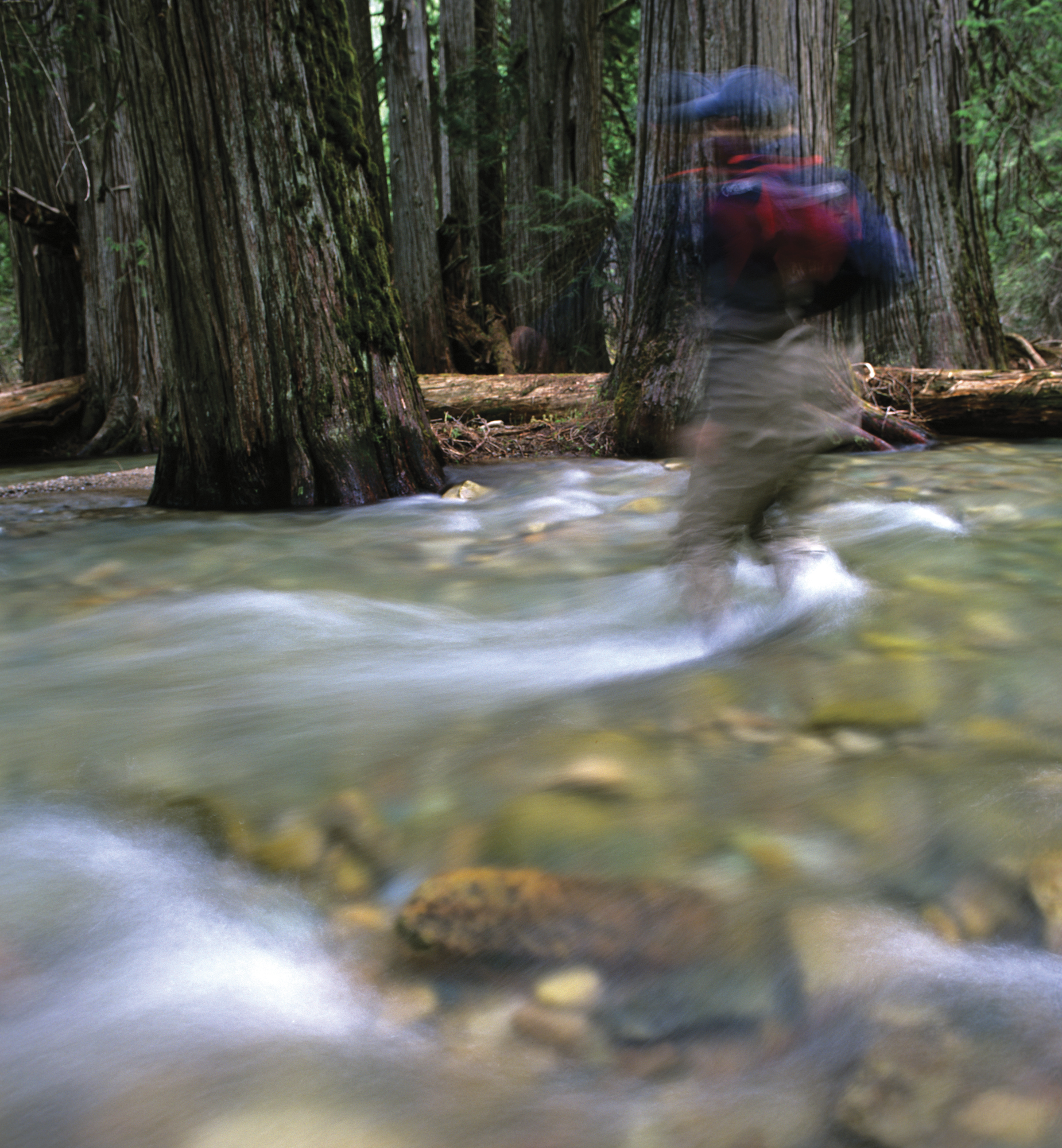 THE CREEK WAS MILKY with snowmelt and ash, and too fierce to cross. We eyed it, backpacks stooping us, and did not speak. The creek bisected a meadow brilliant with spring flowers, but a burned-over forest with blackened lodgepoles girdled it. “Water’s too high,” I said. Rick, grunted. We were four miles from the trailhead, but wanted at least six between the campground and us. “Not worth the risk,” I added. Rick nodded. The cliff above, with its protuberant outcroppings, its red and yellow shadings, looked like the face of an old man.

It was evening, so we retreated to the north meadow, perhaps 100 yards wide and 400 long, and made camp. The space was dotted with glacier-flicked boulders, and its grass was a foot high. Purple, red, yellow and orange flowers rose in a schizophrenic bouquet. I’d packed my rod but had small hope of fishing. The West Boulder was wilder than I’d seen it; runoff flooded the woods below our meadow and had transformed the burbling river into class-V water.

Two years previous, a 29,000-acre blaze had incinerated this forest. Wildfires had threatened to level Montana. Yet this was the spring of deluges. The Midwest was underwater; in Livingston a bridge across the Yellowstone had failed and at this altitude we had driven through freshets to the trailhead. Still, I thought, tomorrow I might wade that flood and get to the river proper. There might be one confused fish circling the lodgepoles. And with foliage decimated, casting would be a snap. This was my first outing of the season.

We busied ourselves with tents and chattered nonsensically. The temperature had dropped. “A fire?” I said. Then scuffled toward the treeline for wood. I found little, and the forest felt spooky. Its trees were black-barked or copper-spotted wraiths. The understory was a paste of ash and soot, from which wildflowers grew in manic profusion. Tracks of large creatures were evident. I gathered six blackened limbs and retreated to camp.

I thought, 20 summers ago I soaked at Chico as smoke from Yellowstone’s fires choked Paradise Valley. Twenty-nine Junes before that I stepped off a train at Livingston on the first day of my first Montana summer. Yellowstone Park had recovered nicely; I was not sure I had. I was 63 and feeling every minute of it.

Tents secured, we boiled water for supper and sat back to eat. I glanced around. We’d flushed a black bear walking in, and last week, in this meadow, a hiker surprised a grizzly sunning itself on a boulder. I jabbed at the wildflowers. A YNP study I’d read noted that post-fire bears grazed more frequently at burned than unburned sites. Lupine, fireweed and clover grew plentifully after a scorching. These were grizzly delicacies that choked our meadow and forest.

The river’s metallic surface flashed through denuded trees, and an amber glow lighted the porcupine-quill lodgepoles of the snowy mountains. This was June 20, the eve of summer solstice. At 9 p.m. our meadow held the brightness of afternoon. High on its northwest side hung a corrugated cliff, with caves and a psychedelic weir: a stone tower with serrated edges.

“We could shinny up there and take acid,” I said.

Rick smiled. “In the old days.” He was eight years my junior, a guitarist by trade and a gear hound. I watched him sort his things with the light-fingered delicacy of a musician. Our conversation, while seated on a boulder by a spring-fed stream, covered the usual topics: life’s meanderings, nature, responsibility, craziness. Last winter, Rick had left a 13-year-gig with an established band to make his own music and to start private practice as an alcohol-and-drug-abuse counselor. Even I was transitioning. I’d republished a book I’d written in my 20s, to unanticipated acclaim.

Rick had brought that book.

“Do I seem different?” I asked.

“Not much. Reading it is like listening to you talk.” We chatted further, but when a cold wind rose, headed for bed.

A volume I’d packed was Fragments: The Collected Wisdom of Heraclitus, and I settled in with it. Known as the weeping philosopher, Heraclitus (535-475 B.C.) had been a metaphysician and by birth an Ephesian. He’d wandered the mountains, was misanthropic and troublesome. He believed that change was the only reality; all things carried within them their opposites; and any notion of constancy was mistaken. Of impermanence, he said famously, that one could not wade in the same river twice: “The river where you set your foot just now is gone — those waters giving way to this, now this.” He believed that fire, not water, was the fundamental substance: “Fire of all things is the judge and ravisher.” And: “All things change to fire, and fire exhausted falls back into things … air dies giving birth to fire. Fire dies giving birth to air. Water, thus, is born of dying earth, and earth of water.”

Heraclitus would have liked our meadow.

It stayed light until 11, and when I awakened at 2 the moon held a corona that, with bright stars, lighted the meadow like a halogen lamp. I checked for bears, urinated, then slept. I dreamt of flame retardant pouring from the bellies of helicopters like blood. At 4:15, I was awakened by a gaggle of birds that shrieked in the early dawn, then quieted. At 8:10, footsteps startled me and I peaked out to see a stunningly tan blonde in a halter-top and hiking shorts leaning toward Rick’s tent.

“Is this your water filter?” she asked.

“Someone lost it,” she said. And trotted up the trail.

Was she a forest sprite, a sylph? Too lovely not to follow, I yanked on pants, jacket and boots. But she’d vanished. Either she had crossed the raging creek or melted into the trees.

We weighed her appearance over breakfast.

“That filter,” I said. “You could have said it was yours.”

Rick studied me. “Two guys were with her. Backpackers. They were headed for the wilderness.”

“But they couldn’t have forded that creek!”

It was 11 before I uncased my rod and rigged up. I trailed our creek through flowers and blackened lodgepole toward the river. Tracks of moose, deer, elk and small mammals pockmarked the duff. I chose a black wooly-bugger with emerald threading that evoked the green-against-soot of the forest floor, and waded through standing water to the river proper. It raged murkily, but a snag at the far bank made a pool, and I cast above it. The bugger raced past at the surface. I cast again, then reeled up and dug in my gear for split shot.

This time the bugger stayed deep and on retrieve a fish struck testily. It shook its head, dodged cross current, then headed north. I kept my rod high as I crashed to a downstream eddy and eased the fish to the bank. It was a handsome brown, 14 inches by my rod grip, its ochre stomach and leopard-spotted back distinct against the loam. I palmed its weight then freed it to the current.

Upstream, I flung sinker and fly at the snag’s head and came tight on another fish. It struggled against the current, but in 45 seconds I had it at the eddy. Another brown, equally beautiful but, I could see, hooked deeply in its jaw. I’d forgotten to debarb. The first trout had been lip hooked, but this one … I gripped its girth as I twisted the hook, shuddering to see it writhe. What an ass I was; this fish would die. And given that, we had neither grill nor pan in which to cook it. I revived the creature, partially, and it slipped toward the flood.

I’d seen a film-short once about a surfcaster landing fish after fish, tossing each in the sand to asphyxiate. A half-hour of this and he needed a snack. He found a sandwich he did not remember packing and bit in. A hook went through his jaw. He was dragged belly flopping toward the surf.

I de-barbed my hook, cast again, felt a third strike, tangled my line in debris and lost the fish. Relieved, I disassembled my rod and splashed toward camp.

Rick was eager to hike and, after a stoic lunch of apricots and granola, we headed for West Boulder Falls. Our creek stopped us. It was deeper. The afternoon sun was hot, and an absinthe-green cocktail of ash and snowmelt clouded the runoff. “Shall we try?” Rick said. Flip-flops hung from a clip at his belt. “Sure,” I said. “If that girl can do it … ”

With hiker’s poles and shower shoes, Rick crossed effortlessly. But I staggered as creek water pounded my thighs, my bare feet having numbed in seconds. Then I was across, hopping toward warm grass and cursing. I pulled on socks and boots, uncasing my rod with trembling fingers. I thought, that run below the falls might hold fish. If I can reach it through the flooded timber.

We hiked past more wildflowers and glacial erratics, marveling at views of the West Boulder, invisible at this remove, pre-fire. I made ribald patter about our sylph, conjuring streamside dalliances with her campmates that left Rick chuckling. “You’re obsessed,” he said.

“We’ll free her, then forgive her,” I said. Enumerating acts of gratitude in forced-march cadence.

The falls were a mini-Niagara, twisting through boulders to a cauldron of resurgent water that howled. Our boot soles vibrated. Pools below were Maytags of debris, their churning hypnotic.

I laughed. “You’ll be dead soon enough.” We sat on a fire-scalped log and nibbled trail mix. We were deep in wilderness, near the heart of the conflagration.

During my first Montana summer, the ranch where I worked felt the ’59 earthquake — the largest in Rocky Mountain history and 7.3-to-7.8 on the Richter scale. Tsunamis rocked Hebgen Lake, 80-million-ton landslides buried canyon highways and both flooding and fire destroyed property. Twenty-eight people died. The log structure where I bunked shook like a wet dog, and the Madison’s South Fork, which I fished, ran murky and wild. At 14, I wondered if the hormonal storm I knew had caused this disaster. But nature killed by itself, it didn’t need my help. As Heraclitus said, “How from a fire that never sinks or sets would you escape?”

WE WERE QUIET hiking back. I detoured intermittently, but mud had joined the river’s ash, mixing snowmelt to a consistency of Frappuccino. Not worth a cast. In the trail near our creek was fresh bear scat, slick as stewed prunes. The creek tasted of sand and soot; it raged more fiercely than ever. I glanced at the red-and-yellow cliff face, in this light evoking the Indian-head ornament of my dad’s ’53 Pontiac.

“What do you think?” I said. But Rick, the whippersnapper, had plunged in. Slow, steady steps, and he crossed.

“You want these poles?” he shouted.

I tossed my boots and eased into the raging snowmelt. The pole improved my balance, but the cold was excruciating. Rocks bruised my feet and my ankles twisted. My Achilles’ tendons, already tight, felt snap-prone. Halfway across I staggered, slipped. I flashed on Japanese woodcuts I’d seen of monks crossing mountain streams. Leaning on staffs, they had laughed. To hell with it, I thought. Join your crippled fish. You’re a young man in an old man’s body. Forget your sylph. She’s sweet clover, lupine, monkey flowers, youth — she won’t return. You’re burned-out forest, and that’s forever. I lunged sideways. My hands shook. Then I was at streamside, panting.

That night I slept like a baby. We ate breakfast, blessed the forest with our droppings and broke camp. The picnickers’ meadow, a mile from the trailhead, was flooded; the West’s much-photographed oxbow was a lake. We panted up, then down the rise and stopped at the river’s footbridge. Water rose nearly to its deck.

Rick glared at me, prickling. “You’re the same.” 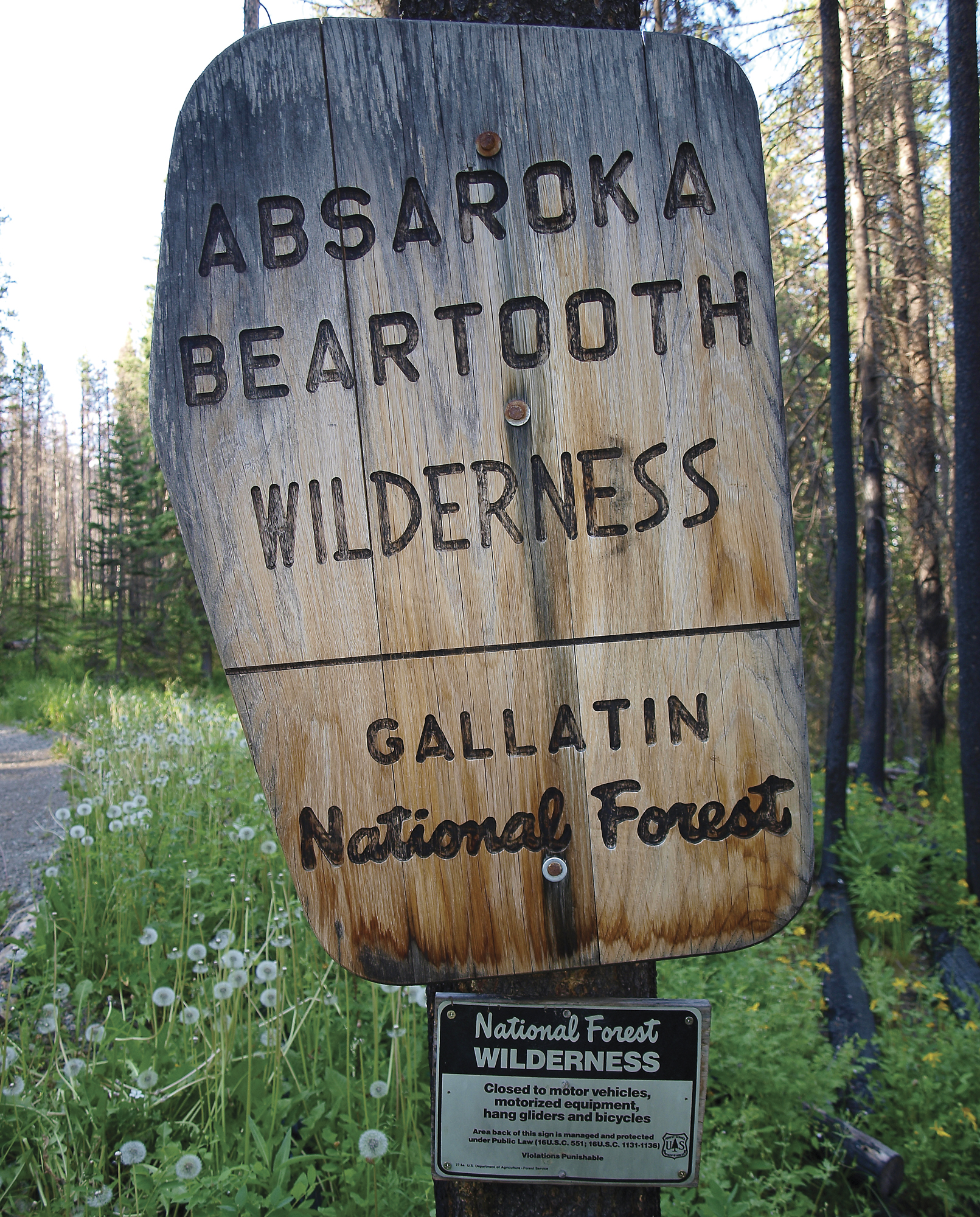 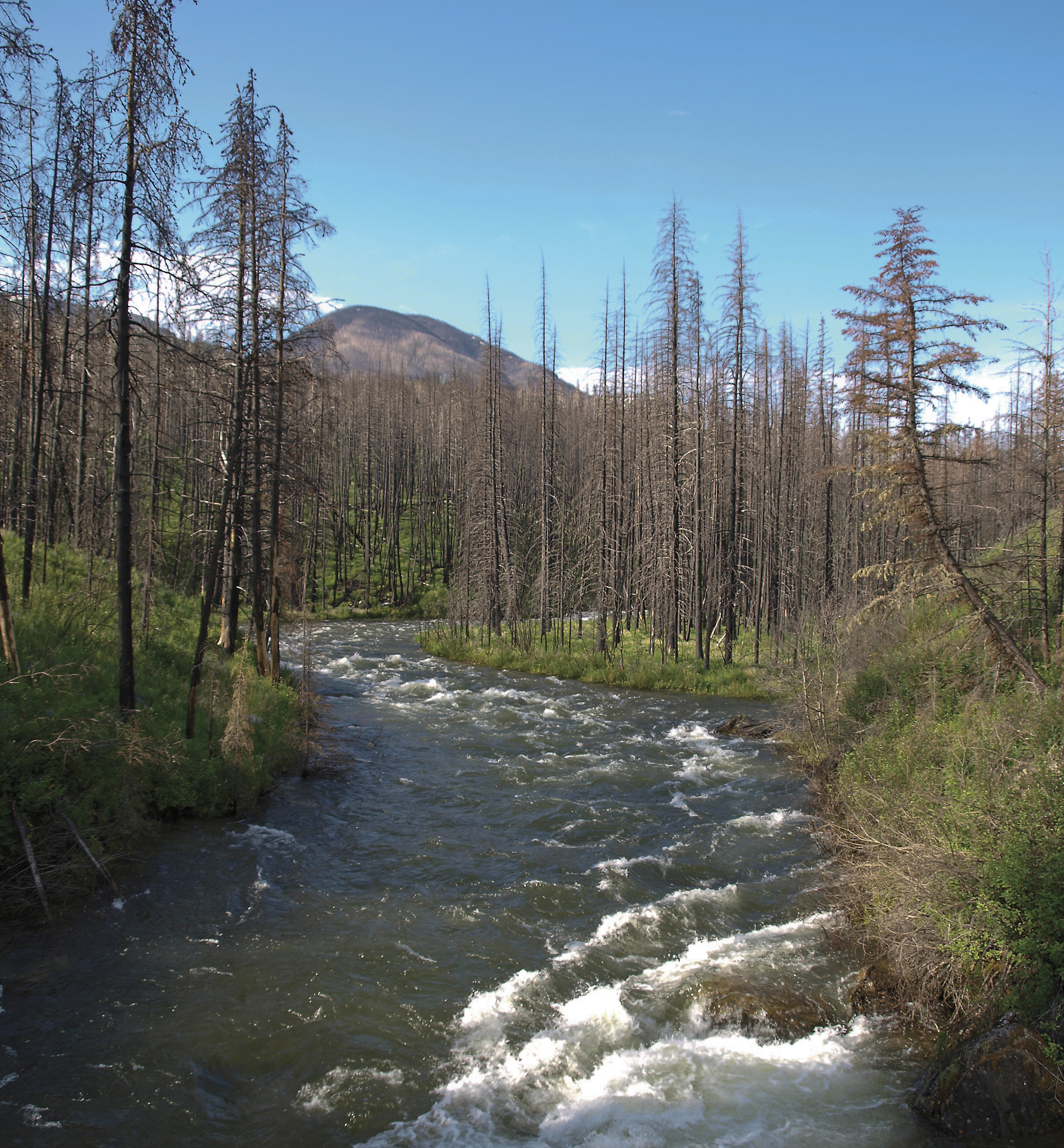 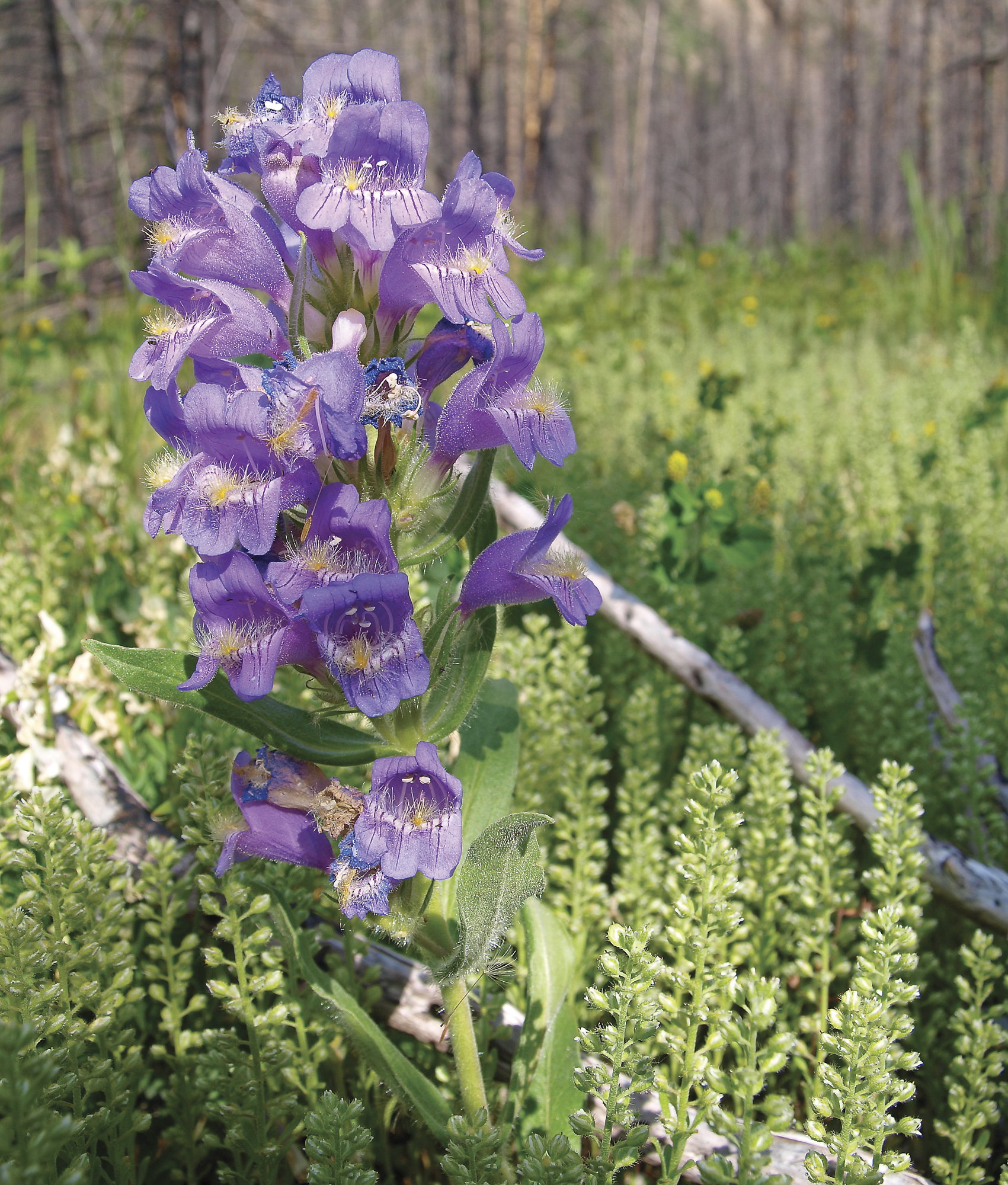