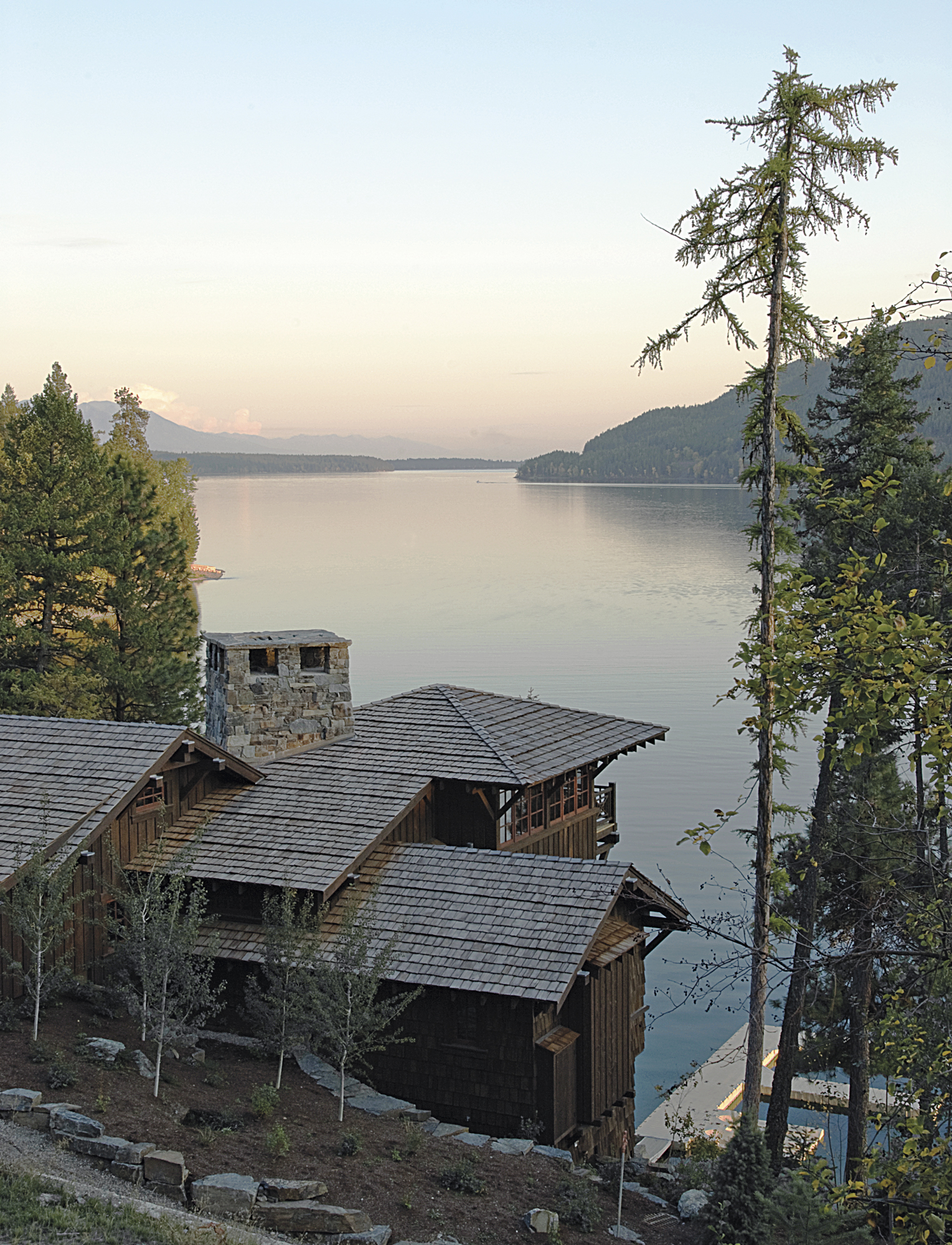 At Pearson Design Group, of Bozeman, Montana, Larry Pearson and his team have pioneered a culture of “Client Centered Architecture.” In an era where an architect’s signature design style often overrides all else, PDG’s driving ambition is to carefully listen and exceed his client’s expectations with individual and unique homes.

“The architectural process is an educational experience for both the client and the architect, as we learn from each other,” says Pearson.

One of his design team’s many goals is to “demystify” the architectural experience by both educating and involving his clients in the design of their homes. Pearson’s assuring nature gives people permission to do something different. As a result, the firm has created buildings that span a broad stylistic spectrum, from Old World rustic to futuristic Modern Contemporary.

Since 1997, Larry Pearson’s architectural firm has become best known for stunning rustic homes. The predominant design seems to be derived from the landscape of the Rocky Mountains, yet Pearson’s background is as complex as the enduring homes his firm designs. His father was an engineer and mother an artist and the family spent time in Europe. Surrounded by architects and engineers, Pearson was brought into the circle of design by the many professionals that were close with his family. Both overseas and in the Rockies, his youth was spent hiking and skiing. When not working Pearson and his dad reveled in hiking the Swiss Alps enjoying and experiencing the mountain architecture.

Later, Pearson attended the University of California in both Berkley and Santa Cruz. While not studying, he spent significant time traveling from Asia to wandering the wilderness regions of Yosemite and other forested lands of the West.  The great lodges of the national parks thrilled him and influenced his path in life. It was the relationship of architecture as a component of the greater environment that directed Larry’s interests. His is a doctrine illustrated by the national parks and indigenous architecture around the world.

But there were other forces of influence as well. Certainly one influence was the Swiss architect Le Corbusier. Pearson took great delight in the unconventional spirit and innovative approach of this architect of the early to mid-1900s. Other designers who inspired him include Frank Lloyd Wright, the Greene and Greene brothers, as well as the Arts and Crafts movement. What emerged from those eclectic influences is an organic approach that is embraced with artistry by the PDG team.

As the PDG team evolves — Pearson, along with senior vice presidents Dennis Derham, Keith Anderson, and Carol Lehmann; architects Josh Barr, Justin Tollefson, Greg Matthews; and interior designers Rain Turrell and Eleana Montoya — their portfolio remains anchored in the philosophy of environmental stewardship and “craftsmanship,” whether the architecture is traditional or minimalist, the attention to detail, quality of materials and beautifully practical design are essential. To ensure this, PDG offers three services within the firm: master planning, architecture and interior design for fluid excellence and aesthetics from conception to construction to completion.

Pearson Design Group has created superb rustic homes in Montana, of course, but they have also completed extraordinary projects in California, New York, Connecticut, Canada and other regions.  The firm’s ability to adapt other styles is a representation of listening and working with clients and tuning into the details that the landscape of a building site requires. The “Client Centered Architecture” approach has led to innovative homes designed in the classic South African “Cape May” style, the Arts and Crafts movement, Southwestern Mission style, Cape Cod, Scandinavian, and ultra Modern.

Blending each project with the environment is the link that defines each PDG home. Structures are designed to become part of the landscape. Pearson’s own respect for the earth is apparent in many homes, which are designed to look as though they have always been there. Using recycled materials such as old, hand hewn barn beams, weathered wood and stone with rich texture fills many homes with charm and character.

Each project tells a story. Nature is the primary influence, even in the sleekest Modern designs; PDG relies on honest materials — wood, metal, stone and glass — to stand unadorned in form, regardless of architectural style. Every detail is applied with perfection, color, overhangs, balance, composition, views, materials, finishes and even interior design are implemented with quality, passion and art.

“I’ve spent more than 30 years in the rustic design business and have written more than 20 books on the subject. I really have seen thousands of rustic homes. I am very selective about the work I photograph,” says Ralph Kylloe, who has published six lushly photographed books on the subject of Rustic architecture. He met Larry Pearson nearly a decade ago at the suggestion of friends who thought the architect’s work would be suitable for publication in one of Kylloe’s books.

“The first home he showed me was a recently completed home called Running Water,” Kylloe recalls. “It was made completely of locally found, indigenous stones, the building, for lack of a better term, knocked me out. The design was extraordinary, the craftsmanship superb and entire ambiance was nothing less than magical.”

Running Water, and several other Pearson homes, appeared in Kylloe’s 2006 book The Rustic Home, along with other Pearson Design Group projects that have been published in at least four of his other books. Because of the quality, originality and uniqueness of his work Kylloe’s latest book, Rustic Elegance, is due out in the fall of 2010 (Gibbs-Smith Publishing), will be devoted to Pearson Design Group residences.

The books have been hugely popular, offering glimpses of handcrafted luxury and creativity in the architecture of Larry Pearson and Pearson Design Group. Perhaps it’s because the firm’s style imparts art into architecture, through buildings that bring people across a threshold that connects with the built environment and the landscape around it.

Ralph Kylloe began in Rustic Furniture over 30 years ago and is one of the best known and respected authorities in the Rustic Industry today. The Ralph Kylloe Gallery is one of a kind and located in Lake George, NY in the Adirondack Mountains. His passion for rustic style has led to numerous books on the subject, the next, Rustic Elegance will be published by Gibbs Smith Publishing in fall 2010. Seabring Davis is the editor of Big Sky Journal and Western Art & Architecture. 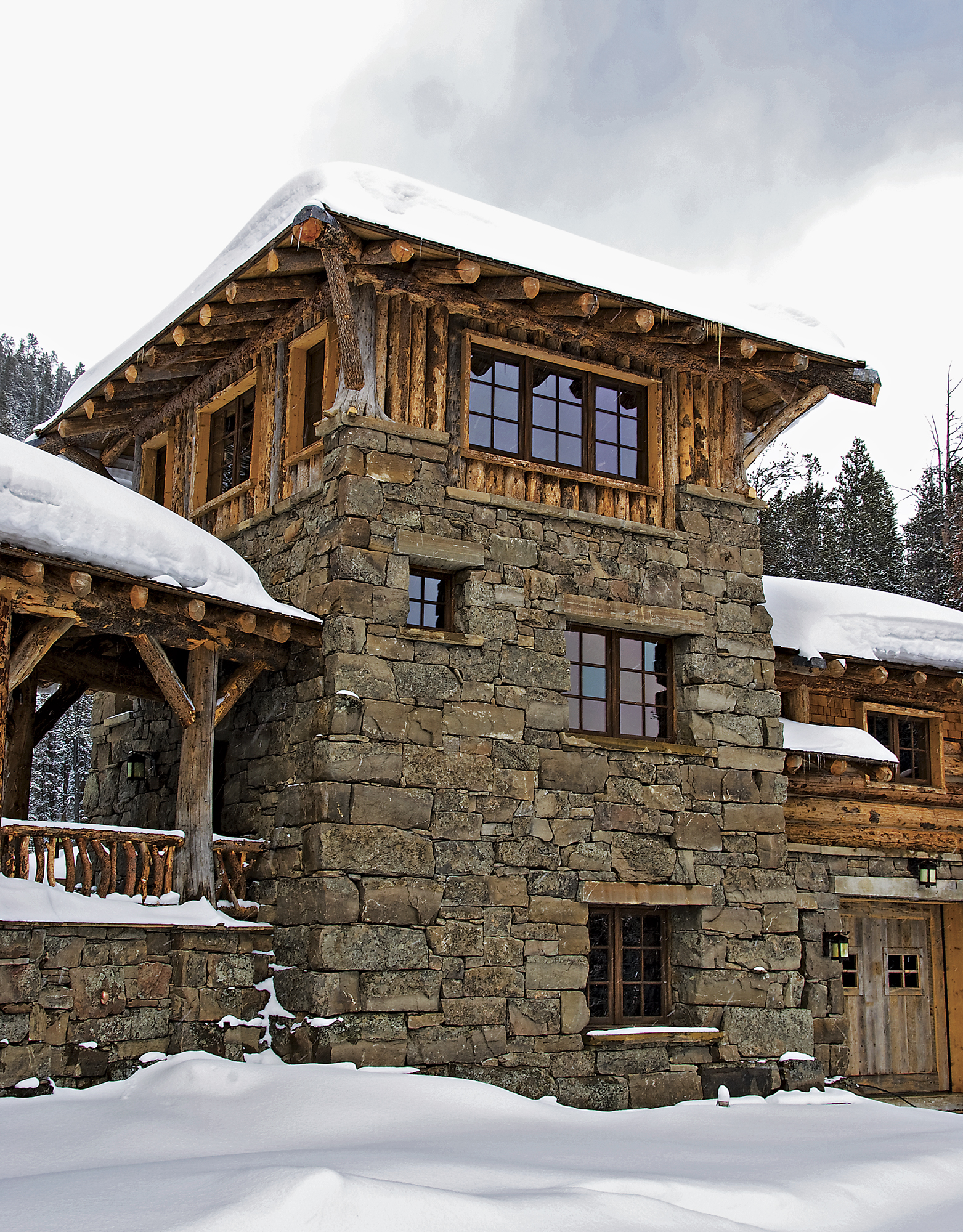 Demonstrating Pearson Design Group’s range of style and adaptability. The rustic style of this stone and log home is a combination of Adirondack and mountain style.

Nearly transparent, this Modern home suits Larry Pearson’s design principles of connection to the natural world, inside and out. 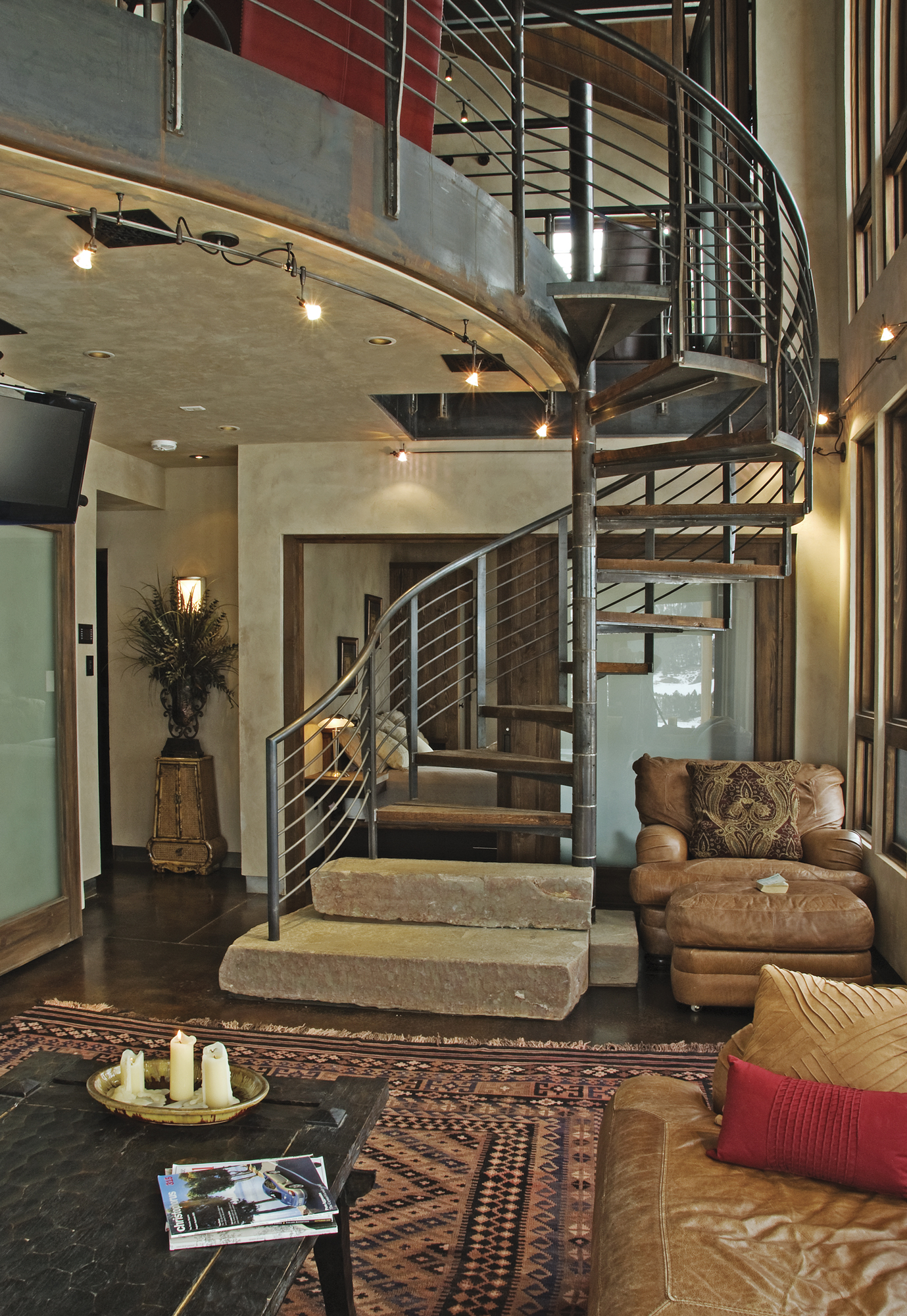 Jumping to an industrial Modern design, Larry Pearson’s signature remains with natural elements, such as the cut stone at the base of the stairs, a natural color scheme and wood accents. 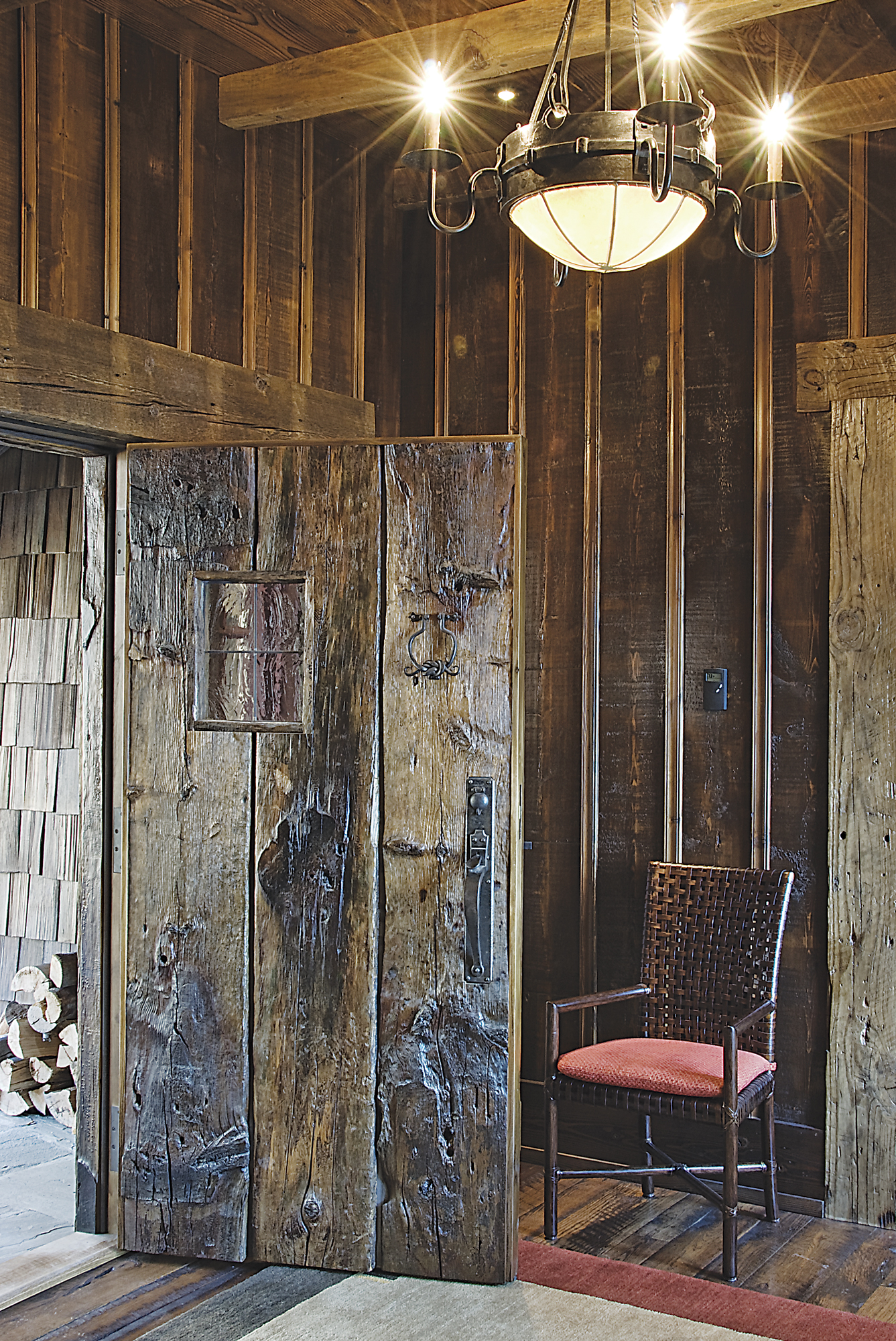 The woodsy influence of the mountain environment extends into the house with texture, color and mass. 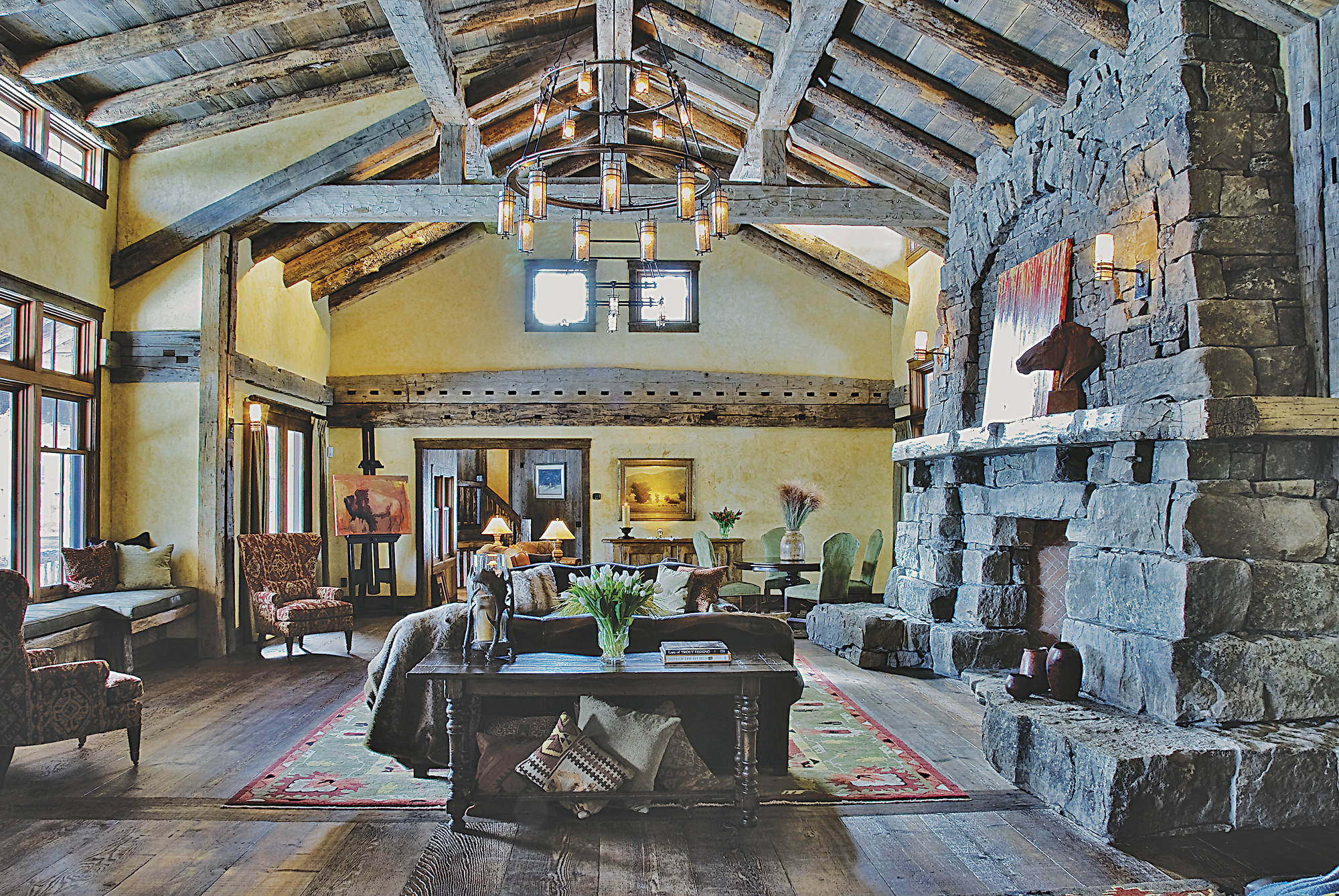 In this great room, hand-applied plaster in a lighter parchment color offsets the rustic elements of antique timbers and stacked stone. 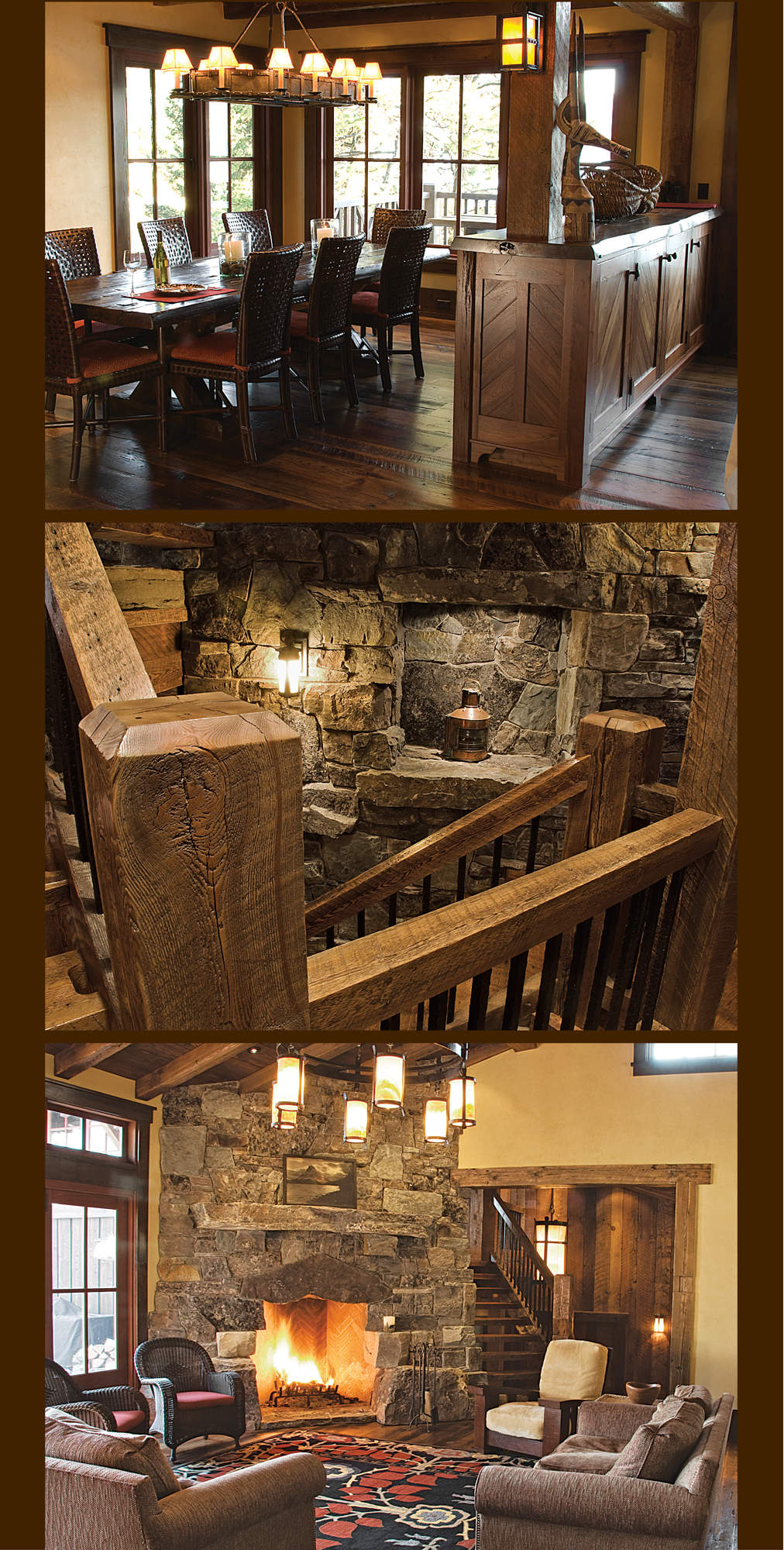 Top: Moving to a more classical Craftsman design, the artistry of the built-in cabinets showcases PDG’s hand at creating comfortable, custom living spaces. Center: Rustic materials are incorporated in this contemporary staircase that combines, stone, me

Inspired by the lodges of the national parks, this lakefront board and batten home blends into the surrounding shoreline.