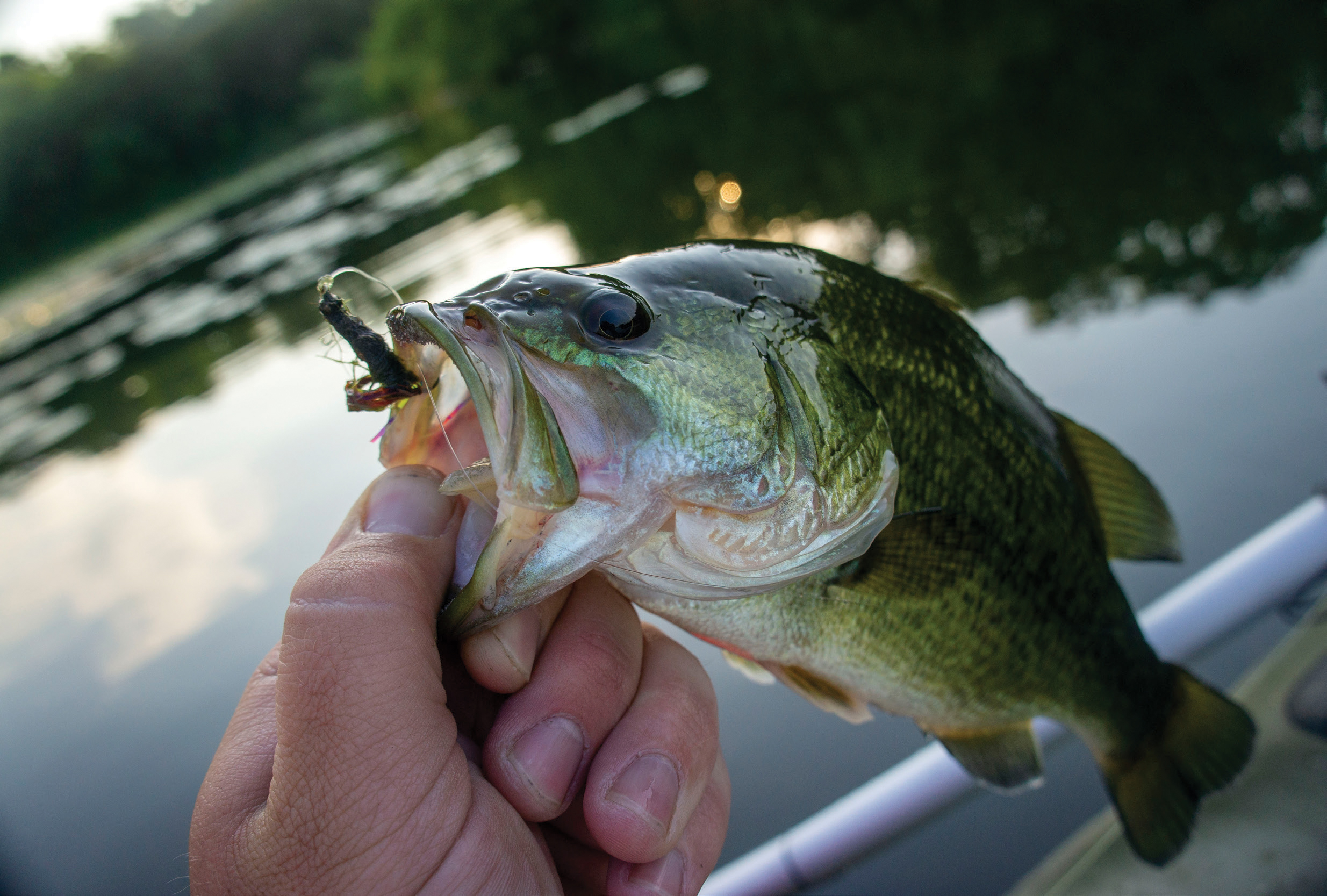 This largemouth bass was caught with a bigger nymph that could have been meant for trout.

04 Feb Creatures from the Black lagoon

Energized by generous spring rains, the hillsides rising above the stream seemed almost impossibly green, and we really didn’t need the crowing cock pheasant to remind us of the season. Wildlife scattered before us as we waded through the grass: a gravid whitetail doe, churring redwings, breeding pairs of whimbrel and teal. The stream itself looked high for the season but not ominously so, and as my wife, Lori, sat down and began to rig her rod, I eased down the bank and studied the water below us. 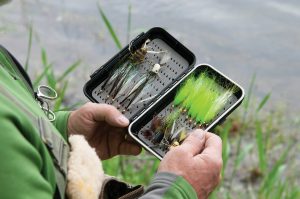 Tied at home by the author, the streamer patterns in this fly box can all be effective on bass — and almost anything else.

Every spring, a few big rainbows reach this creek from the Missouri River, but despite its clear current and tumbling runs, this isn’t really a trout stream. The temperature hovers a few degrees above what trout need to thrive, and if anglers relied on Montana’s signature game fish species to populate it, the stream would remain a beautiful but largely barren disappointment. While I’ve never learned the whole story of the smallmouths’ arrival in this unlikely venue, this morning it’s enough to know they are here.

“What fly?” Lori asked as she finished running the leader through the guides.

I don’t pack a lot of bass flies around in my vest. But if a selective trout is one that won’t hit a Royal Wulff, as the late Montana fly-fishing legend Dan Bailey once suggested, a selective smallmouth is one that won’t hit a Clouser Minnow. Lori made a face as I handed her one, and she had a point: the fly looked so big, the stream so small. But this was what we’d come for, and with the fly in place on the end of her tippet, I retreated and watched her begin to cast.

Nothing happened until she reached the tail of the first pool. Suddenly, from my vantage high on the bank, I saw a dark shape explode from a submerged weed bed and accelerate across the current toward the swinging fly. Then the fish slashed, missed, and doubled backed to attack again. This time the rod tip bucked, and my wife was fast to her first smallmouth bass. 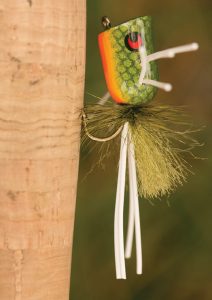 I recoil when I hear the phrase “pound for pound” arise in discussions of various game fish and their merits on the end of a line, because it usually serves as a prelude to a passionate opinion that’s impossible to prove. But as I watched what was going on below me in the creek, I had to admit that smallmouth advocates have a point. It’s not that their favorite fish are faster or stronger than trout; they’re just… different. Airborne three times before Lori could get her line under control, this one seemed determined to present its species’ credentials in style.

Five minutes later, the fish lay finning quietly in the current beside her, subdued for the moment but somehow surlier in defeat than any rainbow twice its size. After one quick flick with her hemostat, Lori and the bass were through with each other, disconnected as surely as if their encounter had never taken place. The stream was too small to accommodate two anglers — that’s why we brought only one rod — and after watching the fish recover and disappear into the depths, we traded places. 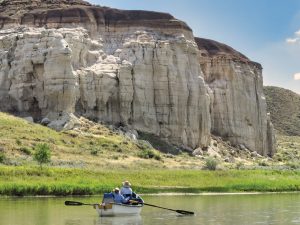 The lower reaches of some of Montana’s famous trout streams, such as the Missouri River (shown here) and the Yellowstone, can provide excellent smallmouth fishing.

It was time to play on, into the heart of a secret no one seemed to know but us.

While politics should seldom be allowed to taint the sacred subject of fly fishing, I find it hard to avoid framing a discussion of Montana’s neglected bass fisheries in terms of our country’s larger partisan divide. While the state’s politics might be characterized as “eccentrically Red,” we’re a solid Blue when it comes to fishing. Anglers visit Montana in droves every year to fish for trout with fly rods. While the state is home to locals devoted to pursuing warm-water species like walleye and catfish with conventional tackle, the image of a tricked-out angler casting dry flies in a trout stream will always prevail when people imagine fishing in Montana.

Some years back, I received an assignment to write a piece on fly fishing for smallmouth bass in Washington state’s Yakima River. Growing up in the Pacific Northwest, I devoted my stream time to steelhead and had never fished for Yakima smallmouths, even though my family owned property along its banks. The smallmouth fishing turned out to be terrific. Since the magazine I was writing for liked to include information about local fly patterns in its destination articles, I stopped by a fly shop and asked the kid behind the counter if he could recommend a favorite for smallmouths.
“I don’t fish for bass,” he informed me in a tone dripping with disdain. “I only fish for trout and steelhead.” At that point, I thanked him for his time, suggested that he ought to get out more, and departed. 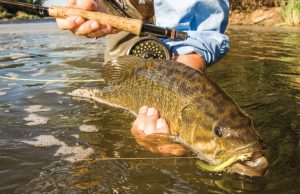 This smallmouth bass was caught with a Clouser Minnow.

One legitimate knock against Montana’s bass is that they don’t really belong here. They are an alien invasive species, and their presence poses conflicts with native fish wherever they are introduced. Washington state, for example, was bass-free until the 1920s. Now those Yakima River smallmouths that I enjoyed catching migrate upstream every spring to devour migrating steelhead and salmon smolt, further imperiling anadromous fish runs that never fully recovered from dam construction on the Columbia River. All too often, introductions of non-native species become something that seemed like a good idea at the time, meeting the law of unintended consequences.

The first smallmouth bass arrived in Montana in 1916, when they were planted in a pond near Bigfork. By a combination of accident and design, they have since become widely established throughout the lower reaches of the Missouri and Yellowstone drainages, where their tolerance for warmer water has largely kept them separate from trout. (Native cutthroats don’t tolerate water warmer than 60 degrees, which is an optimal spawning temperature for bass.) 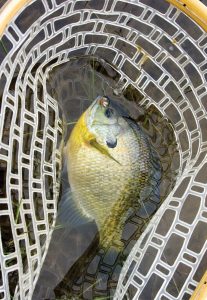 Largemouth bass were also first introduced to Montana in the Flathead Valley, although the date is uncertain. Some of these fish were eventually sent to rearing ponds in Miles City, from where they were planted in ponds and reservoirs throughout Eastern Montana. While superficially similar, these two “black bass” species differ in several ways.

Largemouths really do have larger mouths, with the rear angle of the jaw extending past the back of the eye. Smallmouths are darker green or brown — hence the nickname “bronzeback” — and have vertically oriented blotches on their sides as opposed to the largemouth’s horizontal markings. Smallmouths prefer cooler water and thrive in moving current, which largemouths rarely tolerate. Across their range, largemouths grow larger, although the Montana state record smallmouth outweighs its largemouth counterpart by a pound. Most bass enthusiasts recognize the smallmouth as the harder-fighting fish. 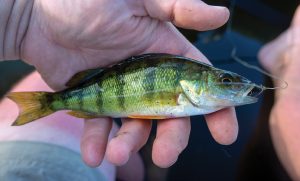 One interesting fact often escapes notice by trout purists critical of the basses’ invasive status. East of the Continental Divide, the cutthroat is Montana’s only native trout. The brown trout, for which Montana waters are so famous, came from Europe, and the majority of the state’s rainbows were imported from Pacific drainages. (Technically, native bull trout and Dolly Varden are char, not trout.) Most Montana game fish species originated elsewhere, including — in addition to bass — walleyes, bluegills, crappie, and lake trout (another char).

The completion of the Tongue River Dam in 1939 created a large reservoir 120 miles southeast of Billings, Montana. Biologists, illegally abetted by enthusiastic anglers toting buckets of live fish, eventually introduced walleye, northern pike, bass, and a variety of panfish to its fertile waters. These introduced species thrived and made the Tongue River Reservoir one of the most popular and productive warmwater fisheries in the state. 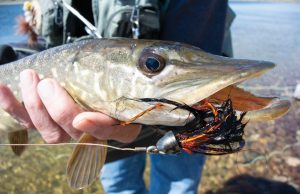 One summer weekend years ago, the Tongue River State Park offered a different setting from a stereotypical Montana fly-fishing scene. The campground was bustling, but thanks to its complex shoreline the lake didn’t feel crowded. Shirtless kids were running around displaying caught fish — mostly black crappie — to parents and onlookers, and lots of coolers were yielding lots of beer. No one seemed to be taking their clothing, their fishing tackle, or themselves all that seriously, and the pursuit of fun appeared to be at least as important as the pursuit of fish.

Despite the amount of fishing taking place, fly rods were scarce. The only ones Lori and I had seen since our arrival were in our own skiff. As we approached the “upstream” end of the reservoir just a few miles north of the Wyoming border, I cut the throttle and let us drift in toward a tangle of flooded brush. Crappies were on our minds, since we were meeting friends at the campground that night for a fish fry.

Another non-native species, crappie are interesting fish that taste good, fight hard for their size, and receive virtually no attention from fly-rod anglers. They’re still small fish though, which is why Lori and I carried rods light enough to make anything on the end of the line feel like a steelhead. 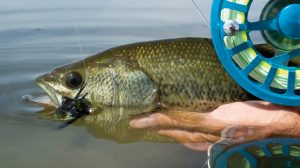 This largemouth bass was caught at a remote reservoir in Eastern Montana.

Years earlier, I’d discovered that a small Crazy Charlie — a saltwater bonefish pattern — can be deadly on crappie. That morning, the reservoir quickly allowed us to confirm that. Since we weren’t interested in keeping more fish than our party could eat that night, I was ready to head to shore by the time the sun started to turn the valley into an oven.

Then, on what I’d promised myself would be my last cast, something remarkable happened. Instead of the subtle tap-tap by which the crappies had been announcing their interest in my fly, a larger fish struck it, and when I strip-set the hook with my line hand, the shoreline seemed to erupt in my face. The fish’s first jump revealed it to be a largemouth bass — not a huge representative of the species, but challenging enough on a featherweight rod in water littered with brush. More than enough in fact, for on its first run the fish wrapped me around a snag and snapped my fragile tippet.

I started the motor and headed back to camp as promised, but that was not my last cast of the day. As soon as the skiff’s bow touched shore, I headed to the truck for my 6-weight and a box of real bass flies, and then I spent the rest of the day back out on the water catching bass — fish beneath the dignity of too many Montana fly-rod anglers.

Too bad for them.