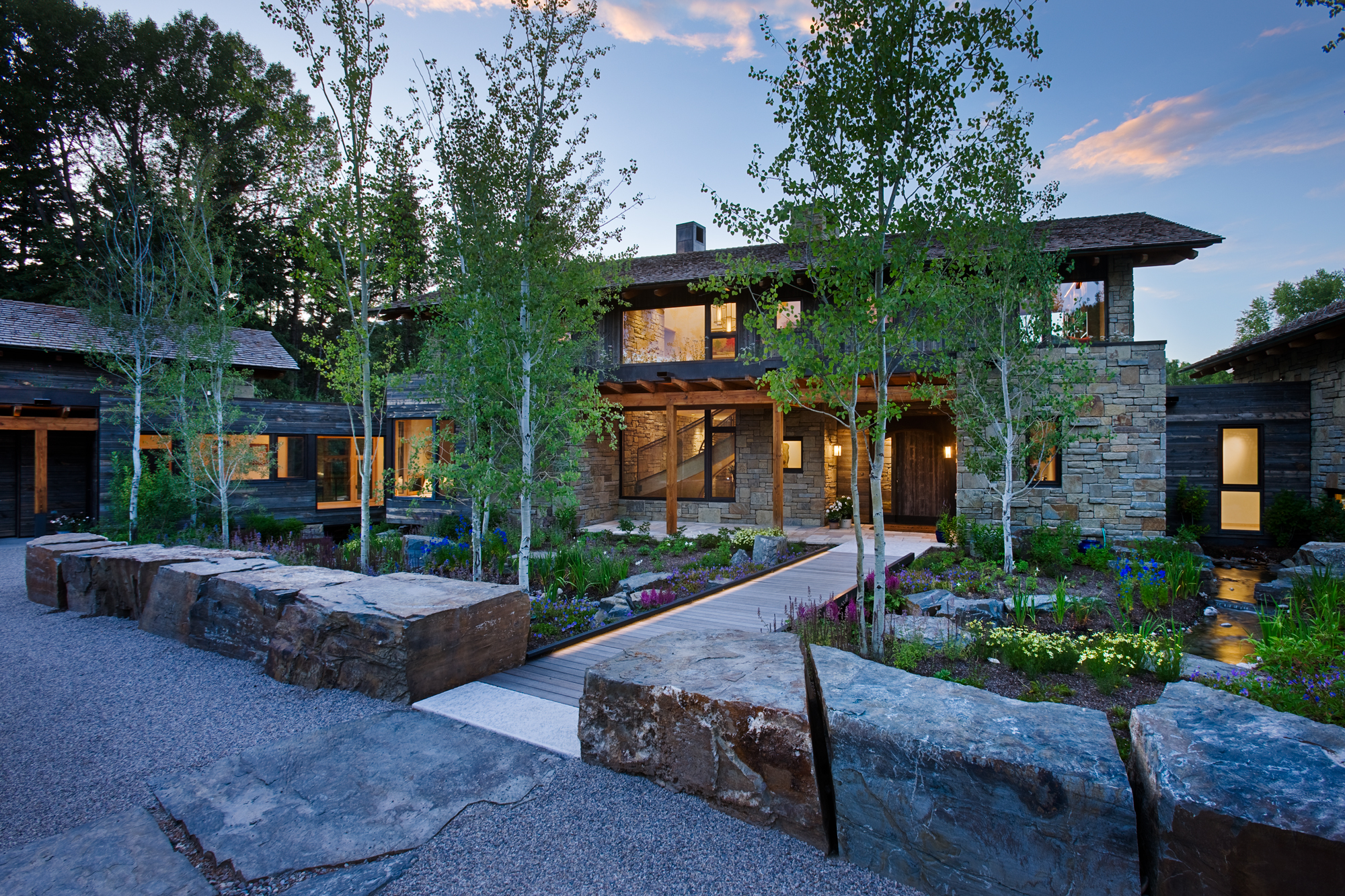 AFTER YEARS OF SEARCHING for the perfect live-water property, one couple found it … but had to make some big changes. It was seven-and-a-half-acres on the Snake River in Jackson Hole. The house on it was upwards of 10,000 square feet. There was also a three-hole Arnold Palmer-designed golf course. The northern neighbor was a long-time family-owned ranch there was a slim chance of it ever being developed.

There was one problem: The “dark and scary” house.

“We bought it for the location,” said the wife, who has lived in Jackson Hole for over 30 years. “And we didn’t think what was there took advantage of the location. There were hardly views of any mountains and you had no idea the river was right there.”

Immediately they brought in a crew to dismantle the original home. The local chapter of Habitat for Humanity spent three weeks hauling away anything and everything that could be repurposed or sold. (In building their new house, the couple made sure to incorporate bits of other structures; interior beams were once part of a trellis bridge on the Great Salt Lake, the front door came from a theater, reclaimed snow fence covers much of the exterior. The only new wood in the new home is the cabinetry and the maple flooring and stairway.) The three holes of golf were also done away with.

Nearly four years after purchasing the acreage, the couple and their three cats moved into a new light-filled, stone and snow fence-clad house that is the antithesis of dark and scary. You can see and hear the river from nearly every room.

Dismantling the former house and Arnold Palmer’s work was the easy part. The design process took nearly a year. “One of the big challenges for us was aesthetically finding a balance between [the husband’s] desire to have a home in the European tradition — a home with a substantial-ness and permanence about it — with [the wife’s] desire to make it a unique building for that particular site,” said Eric Logan, AIA, principal at Carney Logan Burke Architects in Jackson. “It needed to be specific to the site and to feel timeless. A goal was to make people wonder how long the home has been there.”

And they do. Pulling up to the front entrance, you’d never guess the last forklift left only 18 months ago. “It looks like it has been there forever,” Logan said.

Although Carney Logan Burke Architects are self-professed “freaks about daylight” they couldn’t avoid siting one of the three sections near the property’s mature woods. “The house needed something to hang on to,” Logan said. “And that something was the huge trees. We ended up with this scheme that spreads itself apart on the east-west axis between the trees and the river. It fills the southern end of the site and preserves everything to the north.”

Breaking the house into sections had additional benefits. The owners were adamant spaces be kept small and comfortable and that the outside be easily accessible from any part of the house.

“Our desire for smaller spaces was part practical — we didn’t want to heat big spaces — and part comfort — I like homes that are cozy and intimate,” the wife said. Interior designer Agnes Bourne responded to the clients desire for comfort by adding window seats to many of the rooms — upholstered in varying patterns and shades of blue according to the chosen color palette.

The entrance is the home’s grandest area. Visible through the windows, a freestanding maple staircase — manufactured by Spearhead Timberworks in Nelson, British Columbia and brought to the site nearly complete — curves up to the second floor’s open hallway. From the hallway, which connects the library, a personal yoga studio and the daughter’s sitting room and bedroom, you can look down and admire the staircase, which most visitors can’t help but do for at least a minute, or out the windows at the aspens, native flowers, limestone boulders and creek in the “front yard” designed by Mark Hershberger of Jackson’s Hershberger Design.

The couple spent a significant amount of time considering the views from all the rooms, decks and patios. Early in the siting and design phases, contractor Kurt Wimberg built a viewing platform that could be raised and lowered with a forklift. “We parked it at different spots on the property and checked out the views that we’d get from different heights,” the wife explained. Because river views and sounds were important, the land beneath the house was built up five feet. “Being level with something isn’t the best way to see it,” Logan said. “By raising the house just that little bit though, we were able to make it visible and audible from almost everywhere.”

The only room with high ceilings is the maple-floored library. Lined with bookshelves, the library sits above the living room with expansive views to the north and east. A sleek wood desk is angled toward views of the Snake River, the Tetons and the Gros Ventre Range.

“I had been wanting to live near the water in Jackson Hole for 15 years,” said the wife. “Now living in this house, I know it was worth the wait.”

In the end, you won’t find a great room with soaring ceilings here, but if you want to walk down to the river or the swan pond or out to the expansive patio made of limestone imported from a French monastery, there are half-a-dozen exits to choose from. After all that work, the property flows as naturally as the landscape that surrounds it. 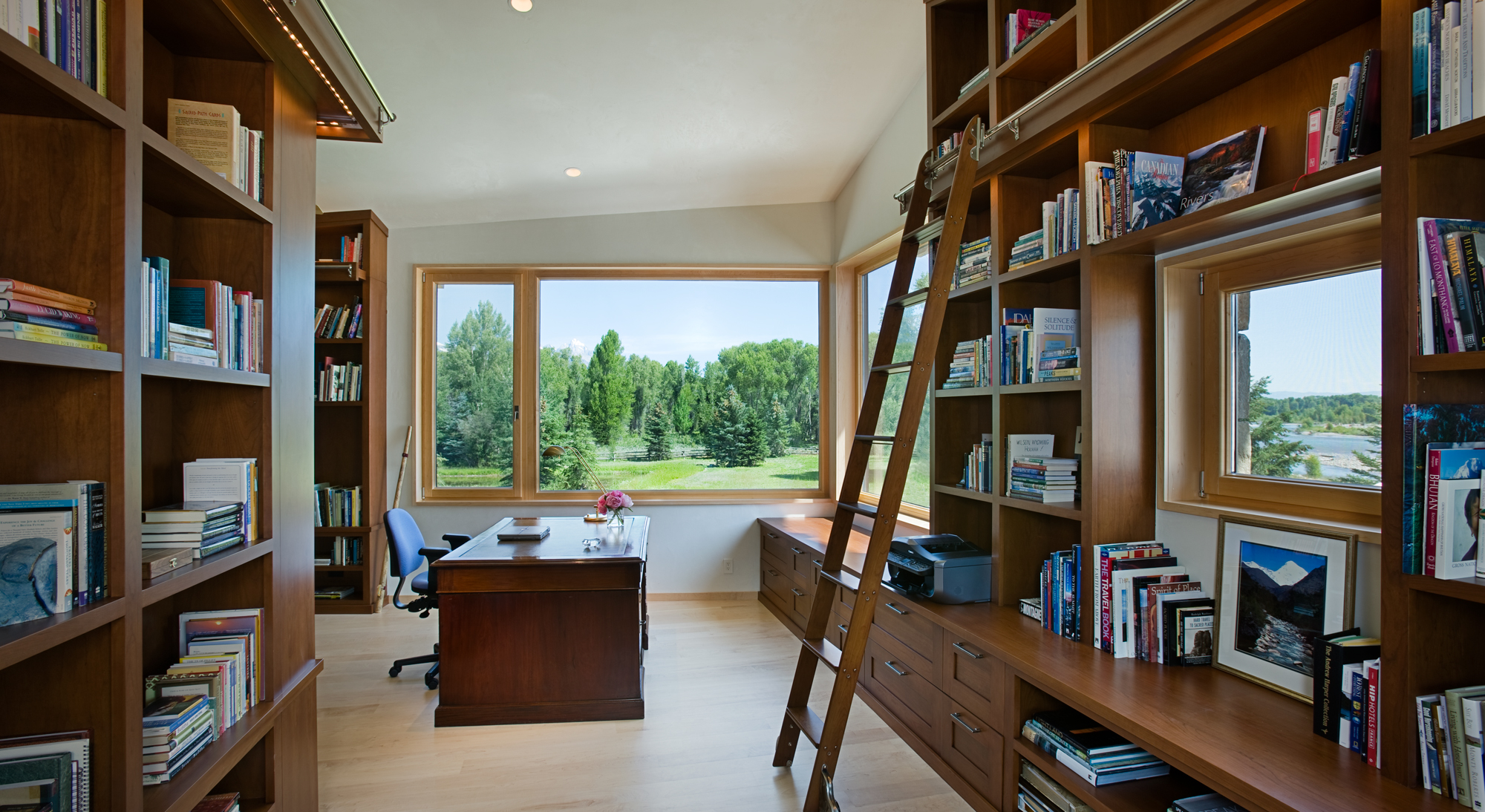 Organized with the help of a Teton County Library staffer, the library is actually as functional as it is beautiful. 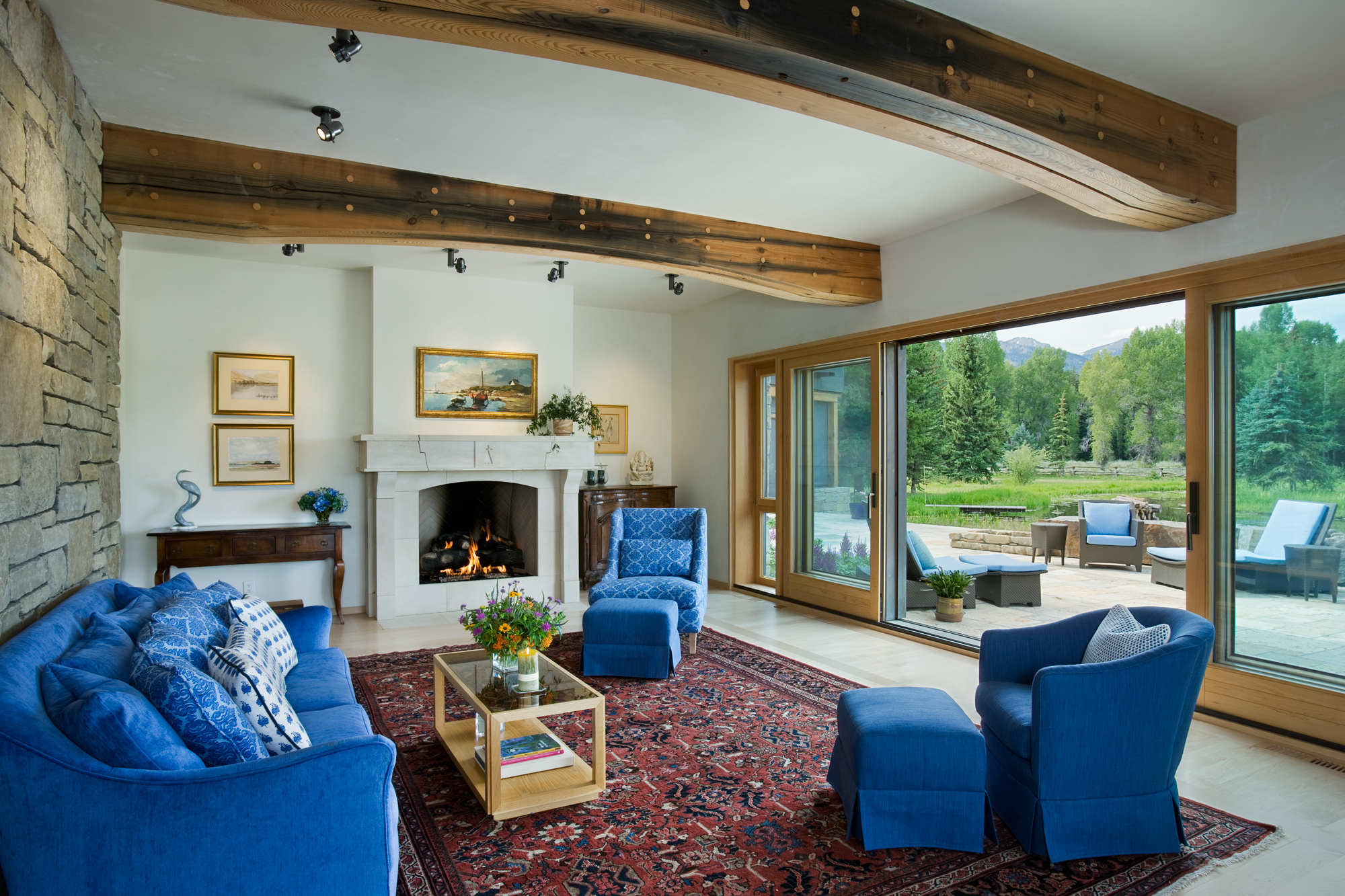 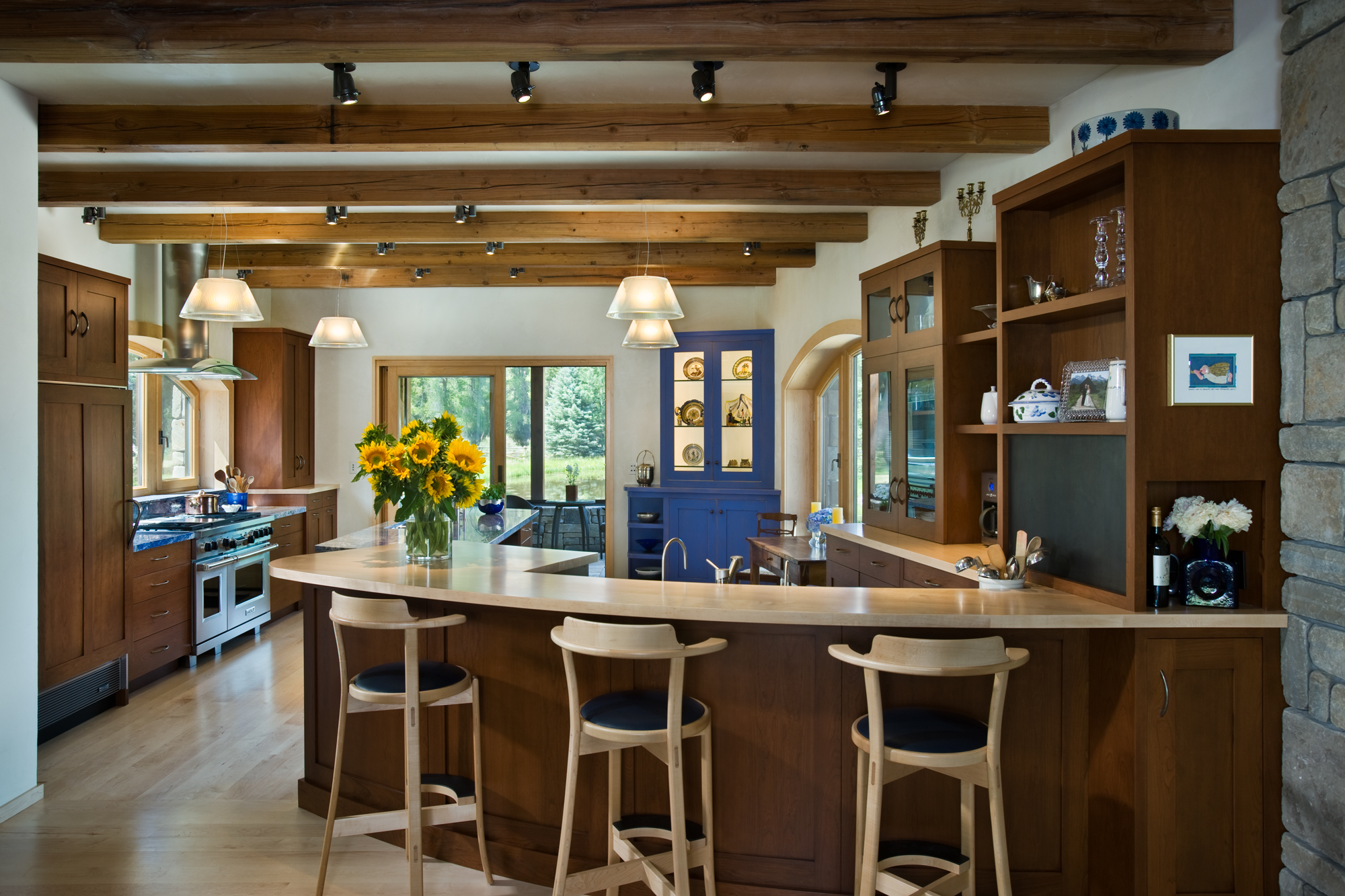 When she first saw the blue kitchen cabinet, the wife hated it. After the blue granite countertop was installed around the stove it became one of her favorite features in the house however. 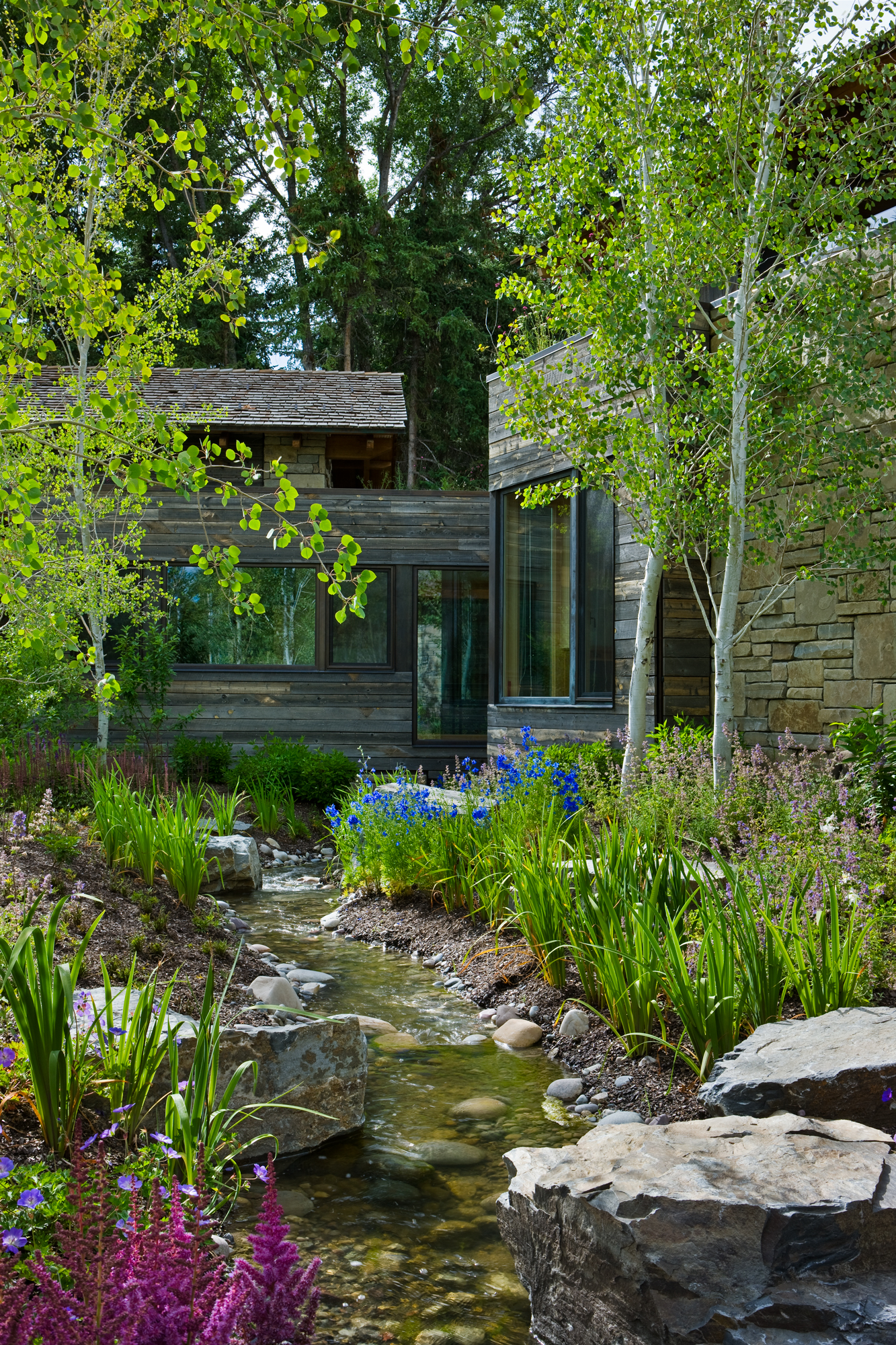 You can see and/or hear the Snake River from every room in the house, but the owners still wanted water to play a part in the landscaping. This small stream winds under a window in the master bedroom before flowing past the front of the house. 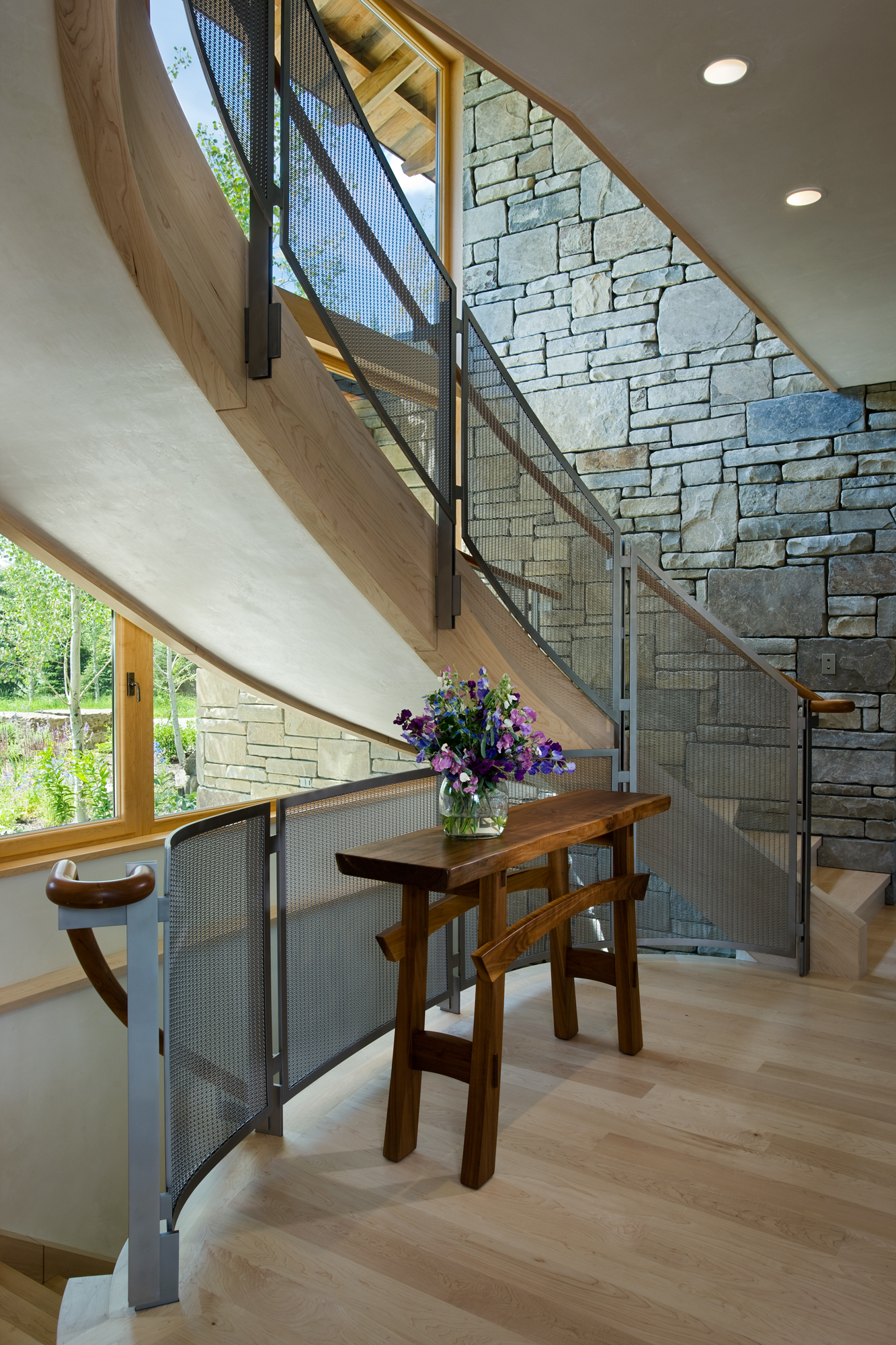 The only new wood used in the house is the flooring and this stairway, made by Spearhead Timberworks in British Columbia.