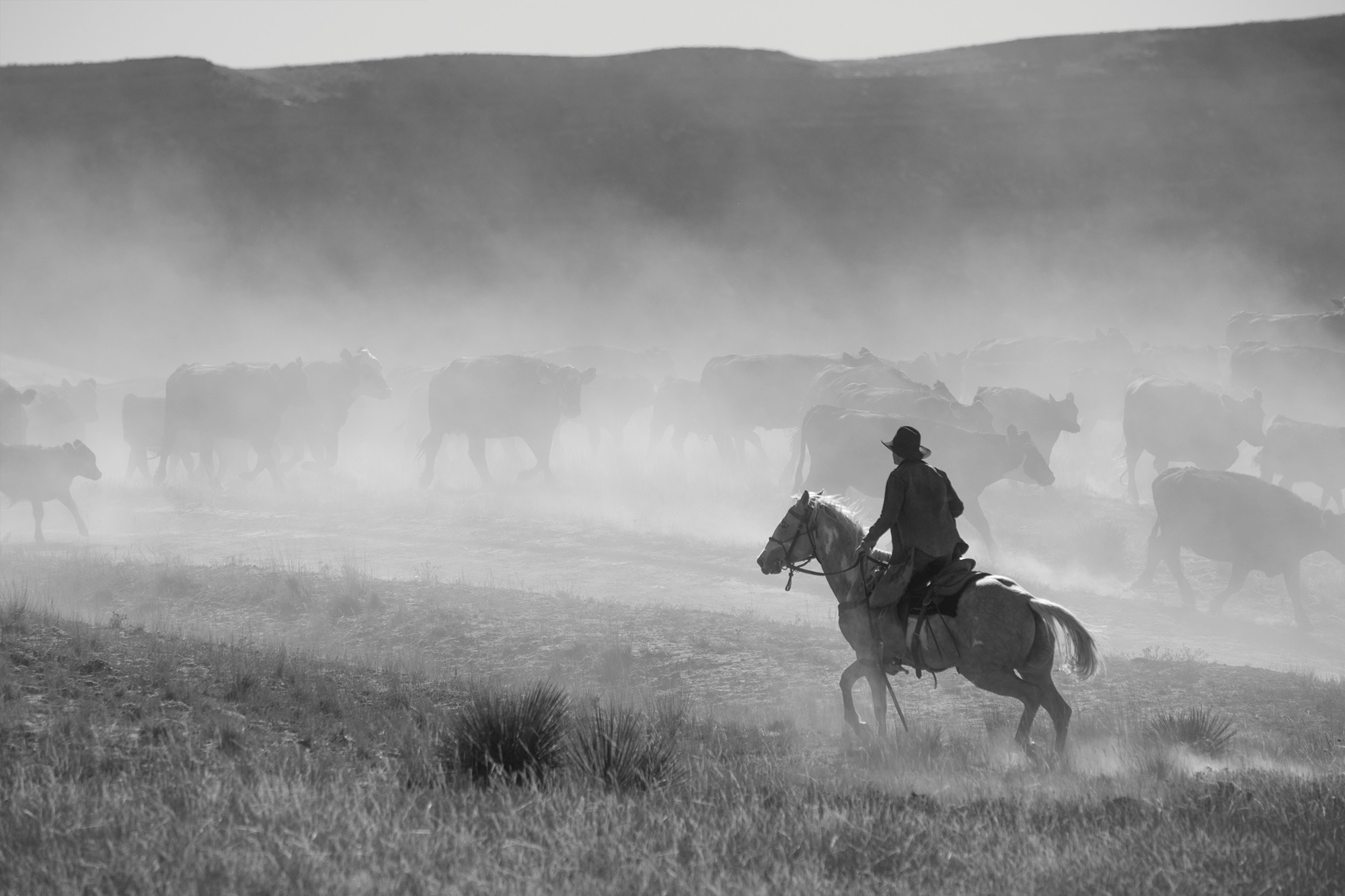 AMONG THE SHARED MYTHOLOGIES of our culture, the narratives that help define who we are and where we come from, few are as pleasantly misleading as that of the American cowboy. The disconnect between the clean shaven and pistol-toting, spur-jangling, riding-off-into-the-sunset fiction and the bloody, vulgar, overworked and underpaid, hoof-bruised reality is, alas, a Grand Canyon of pop culture entertainment.

Consider how refreshing it is then — even redemptive — to come across a writer, filmmaker, or photographer who is devoted to the real, to popping a few balloons even while bending a knee. It’s a complicated business. But if you’re a creator in this context, if you’re a part of the culture even while standing slightly outside of it, it’s a subject that’s almost impossible to resist. Rich with romance, shot through with subtext, every artful image, every character and scene, is a nod toward a sum much larger than the constituent parts.

From the time he first began capturing cowboys on film in 1989, Wyoming photographer Adam Jahiel has devoted a measure of most every year to the subject. It has become a lifetime project. He started out in Susanville, California, near the Nevada border. “I was actually doing an editorial piece on rodeo,” he said. “And I looked around and thought that here was a part of the world that was disappearing very quickly. I got permission from various ranch owners to go out and shoot some images. I started off on this trek, and thought it would be something I’d do for a few months. But it just got hold of me. It became a project that I’ve worked on year after year.”

Jahiel has spent the bulk of his time photographing the cowboy life in the sprawling and well-storied ranches of Nevada, California, and New Mexico. But he’s shot out his back door in Wyoming as well, spending time on both the Padlock and Willow Creek ranches. “My first visit to a ranch,” Jahiel said, “I went into the cookhouse, and I looked around, and everything was so pared down and spare. It really reminded me of an old Walker Evans or Dorothea Lange photograph. It had those going-back-into-history qualities. And I think that’s what interested me initially. I thought, this would make a great subject for some black-and-white work. I visited the one ranch, and came back and made prints, and then just by word of mouth ended up going from one ranch to another. I’ve always thought highly of documentary photography, and I see this as an opportunity to document a part of the world that’s hidden away, that’s lost in time. It’s a subject, a group of people that a lot of people don’t have access to. And I wanted to tell their story.”

In part because it’s where he feels most comfortable, Jahiel still uses film, and he prefers a medium-format, range-finder camera. “It’s all manual. And I like the square format. I like shooting film. I have commercial projects where I’ll shoot digital, but I started out shooting film on the ranches. It seems like the whole tradition of film goes along with the tradition of cowboys. Plus, I get to work in my darkroom, and for me making prints in the darkroom is incredibly satisfying work. It’s fun to go splash around in the chemicals, have a hands-on experience.”

The format fits the subject: a nearly-anachronistic medium for an ancient and rapidly disappearing life. Finding a moment and seizing it, elevating it, fixing it on paper and silver nitrate for posterity. Cowboys in America, balancing the real with the imagined, finding beauty in the frozen moment. Start to finish, it’s the real deal. The lifetime work of an artist. 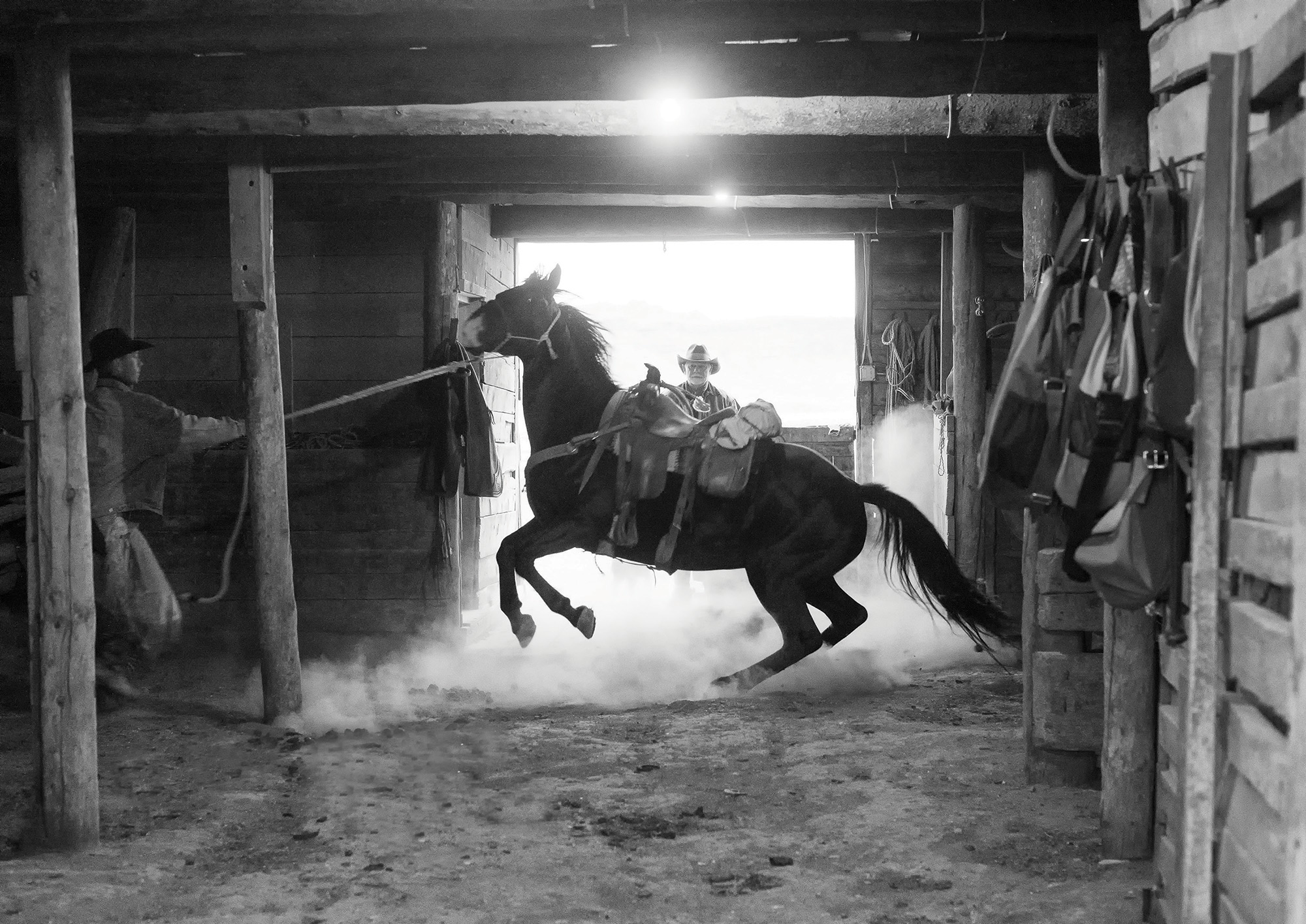 Barry Crago holds a spirited horse in a Willow Creek barn while Clint Black looks on. 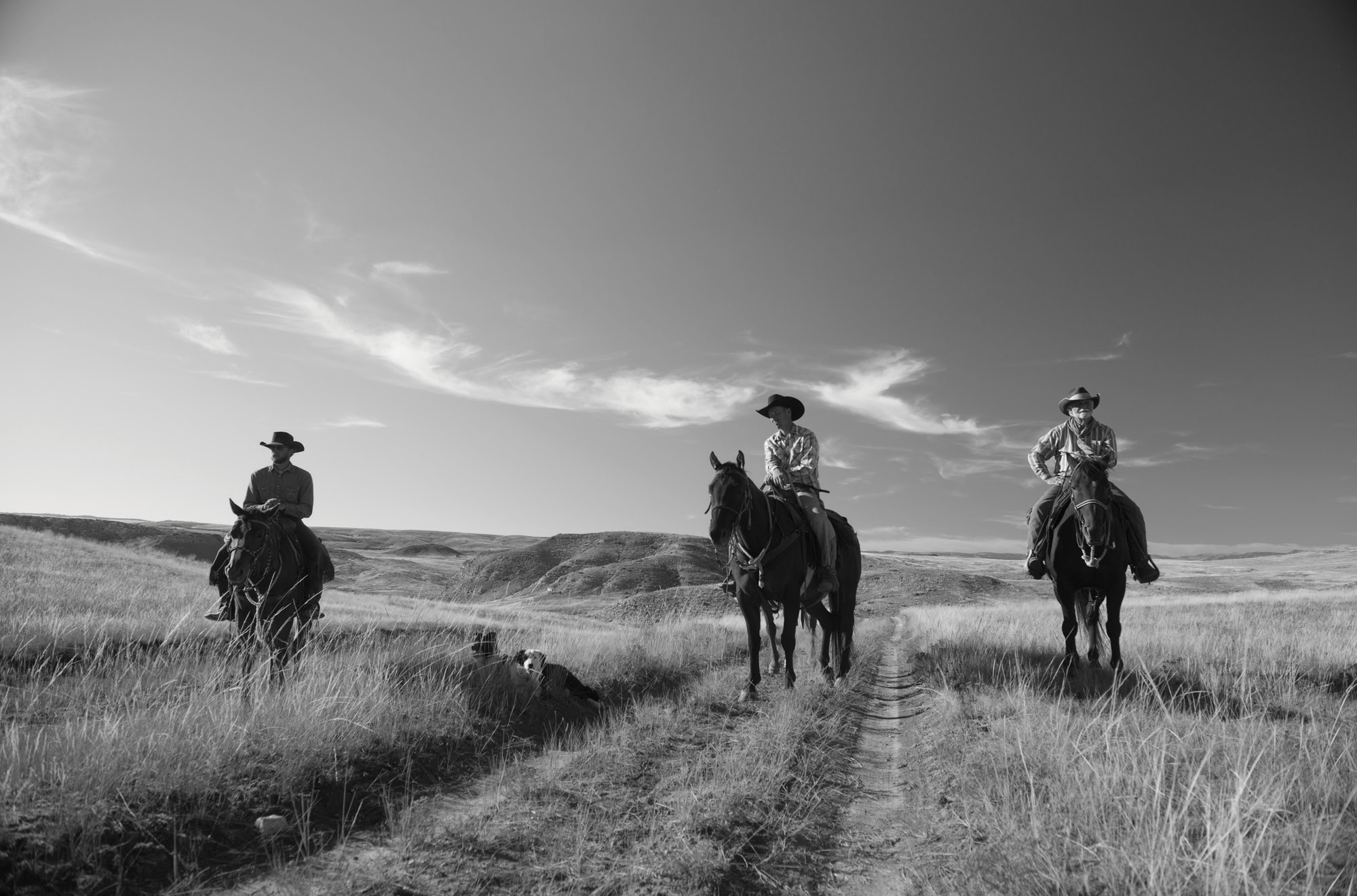 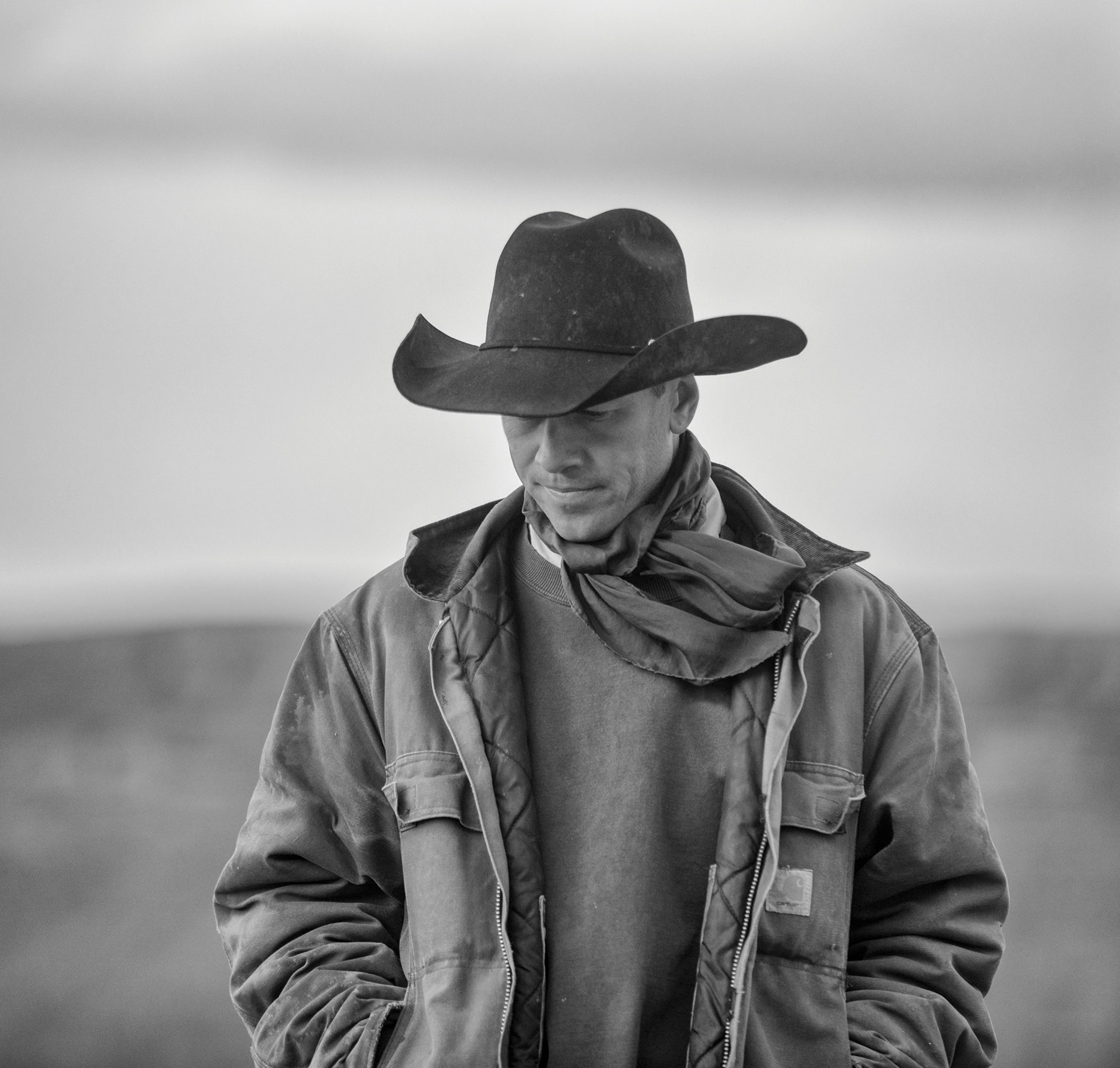 Barry Crago is owner of the Willow Creek Ranch at the Hole-in-the-Wall, Wyoming. 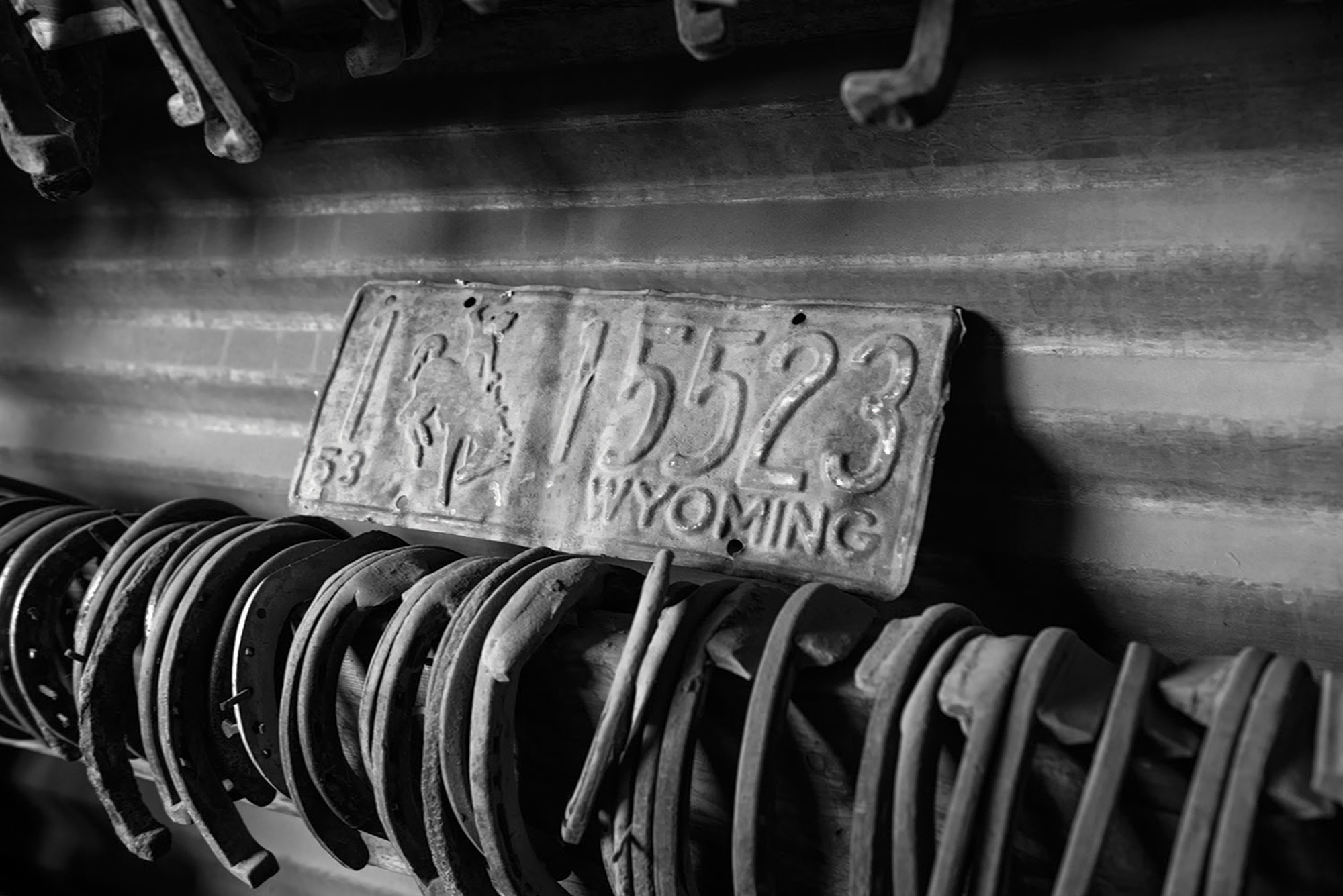 A license plate dating back to 1953 sits in the ranch shop, along with other relics of ranch history. 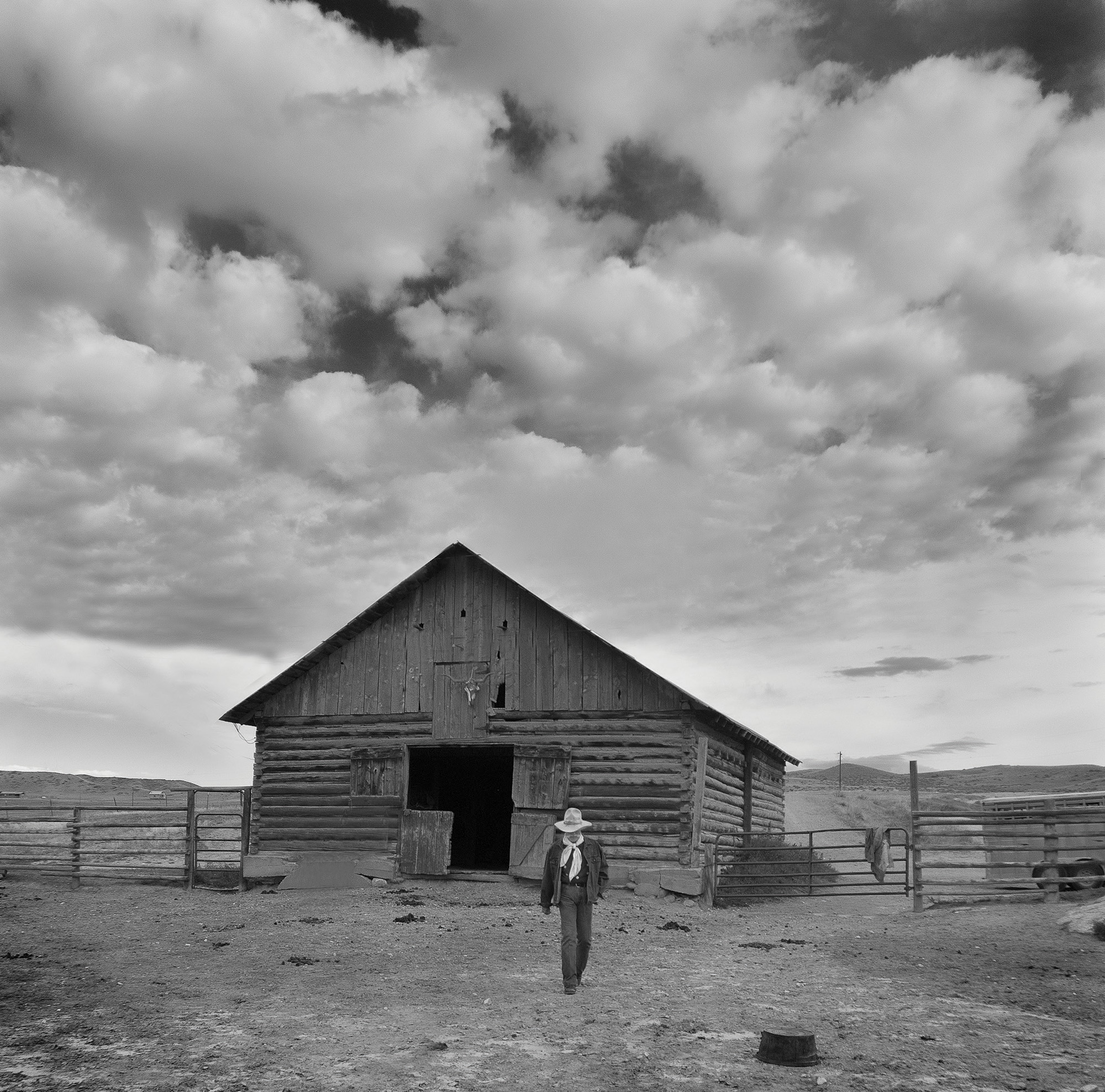 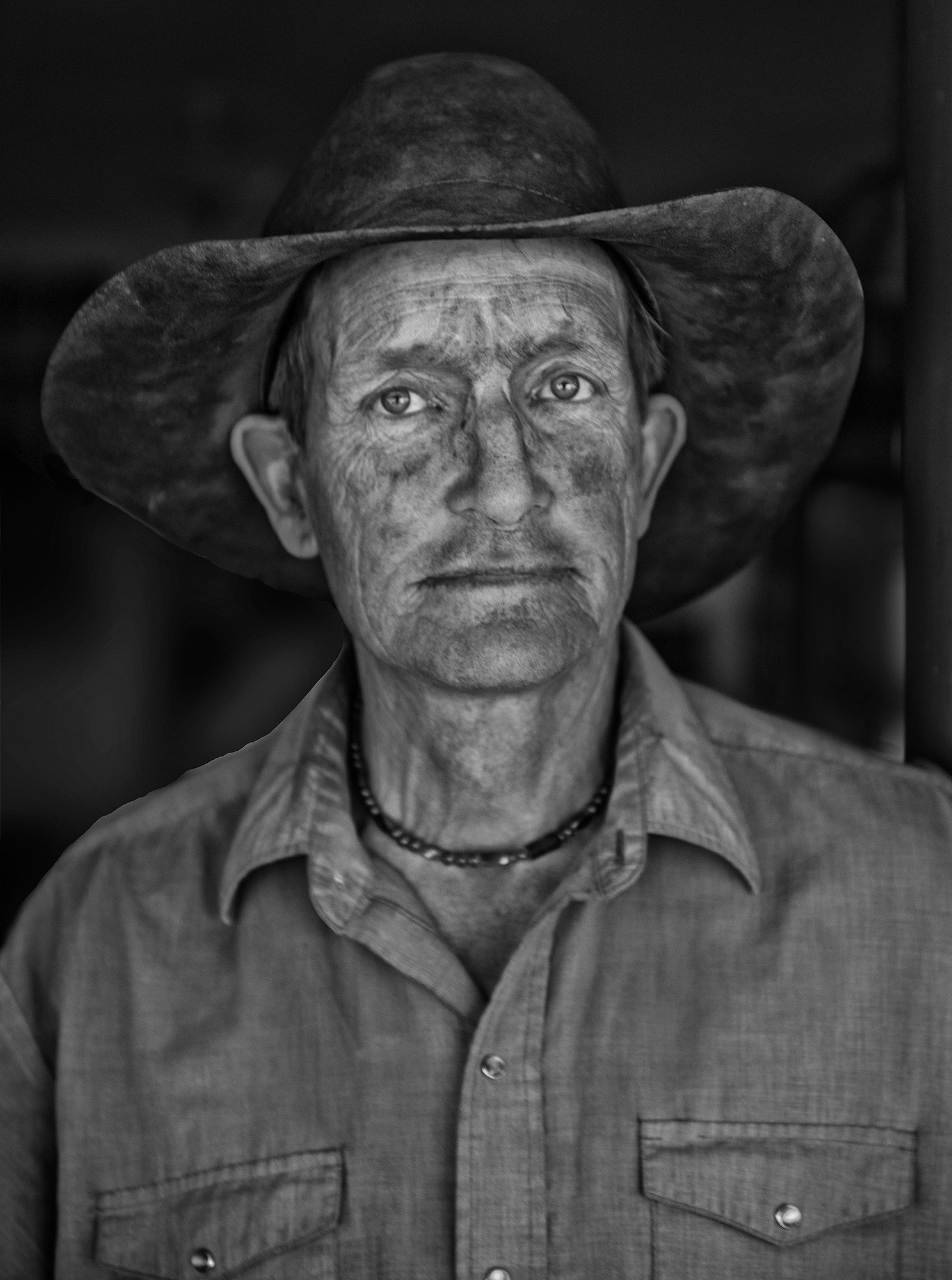 Photographer Adam Jahiel describes cowboy Ord Buckingham, right, as a historian, horse trainer, musician, philosopher, and veteran of many years of work on the Willow Creek Ranch. “At the end of a long day moving cattle along the Red Wall, Buckingham was covered with the dust from the red sandstone that surrounds the ranch.” 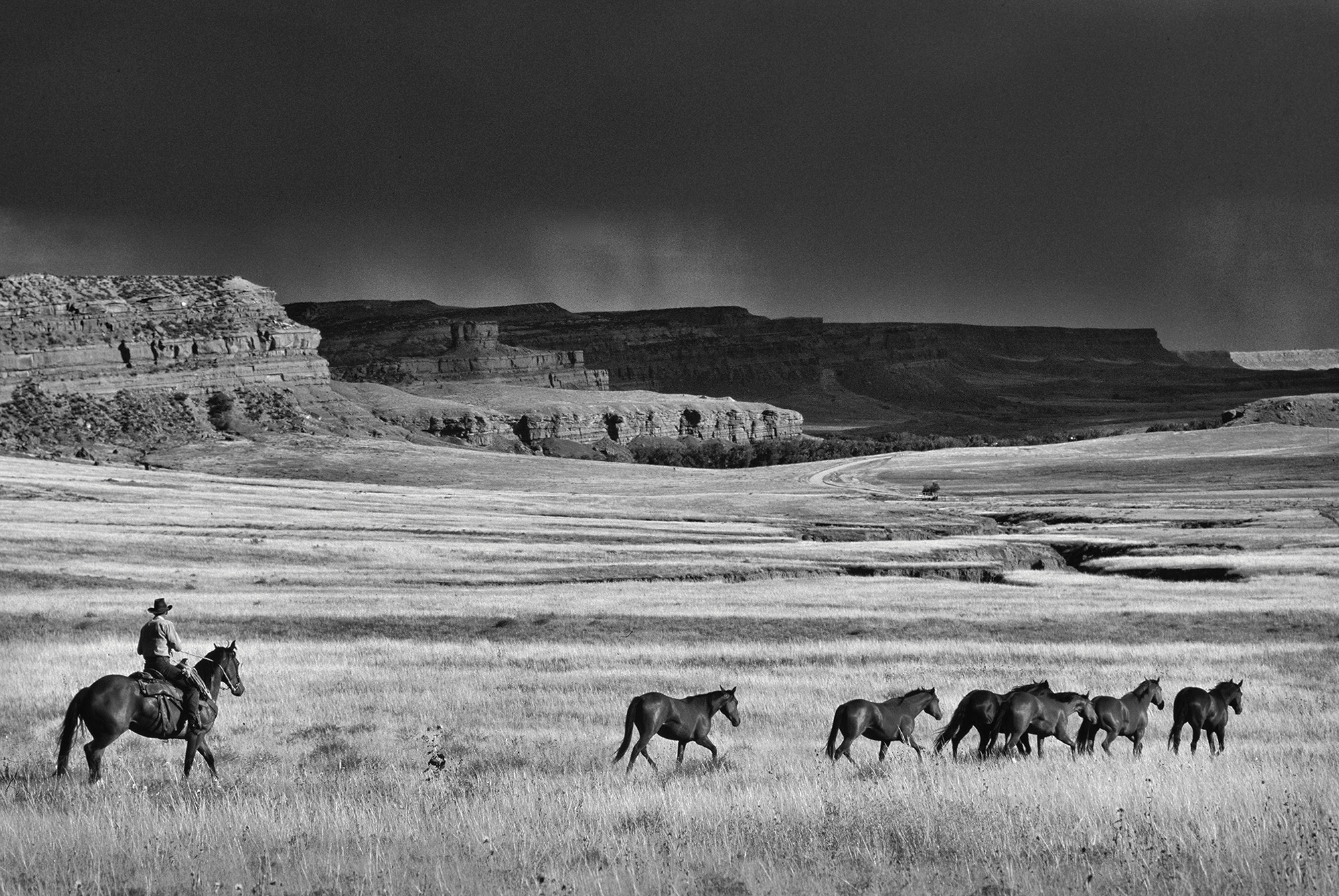 Wayne Graves, a neighbor to the Willow Creek Ranch, moves horses on the north side of the 70-mile long Red Wall near Kaycee, Wyoming. 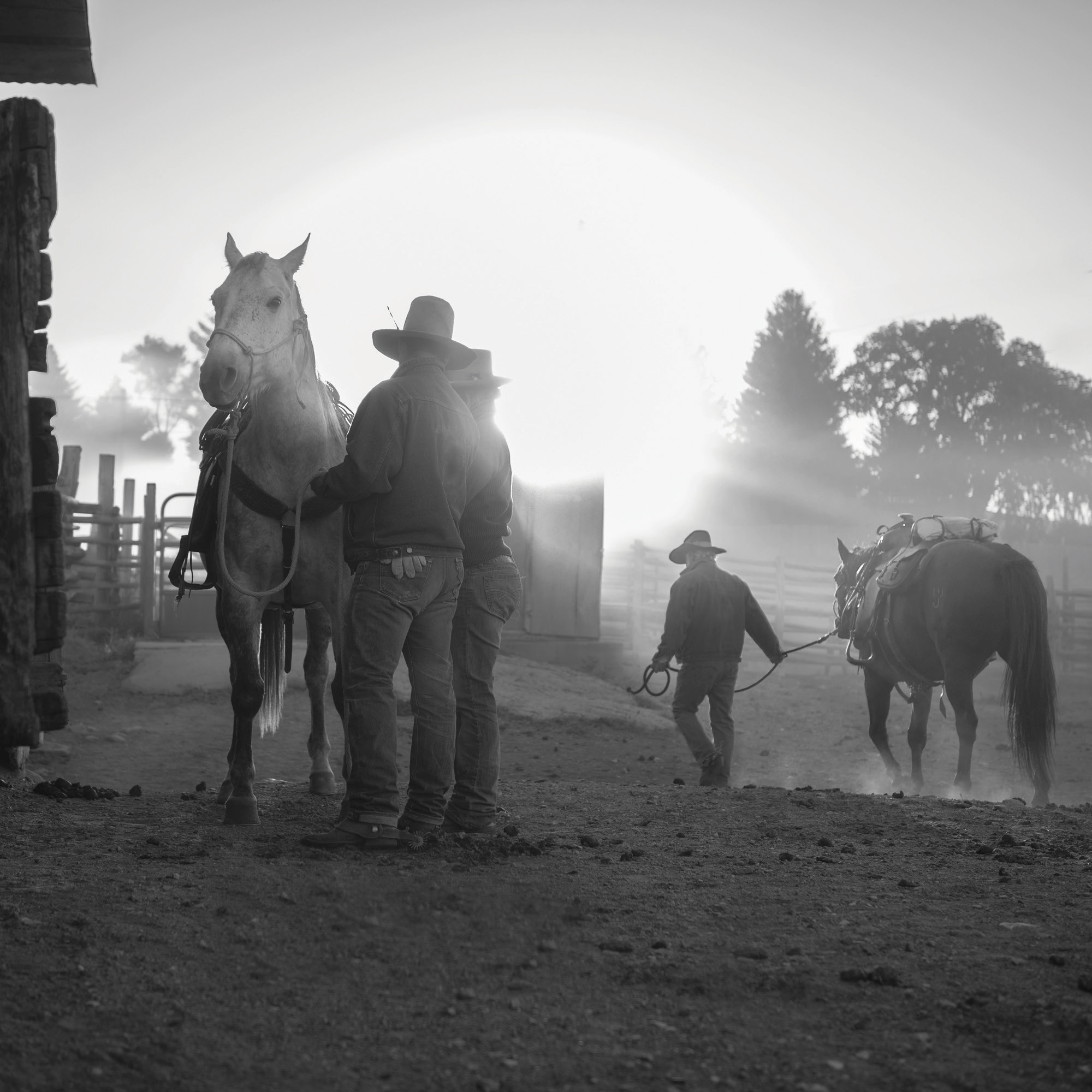 Willow Creek Ranch cowboys saddle their horses as the sun rises behind them. 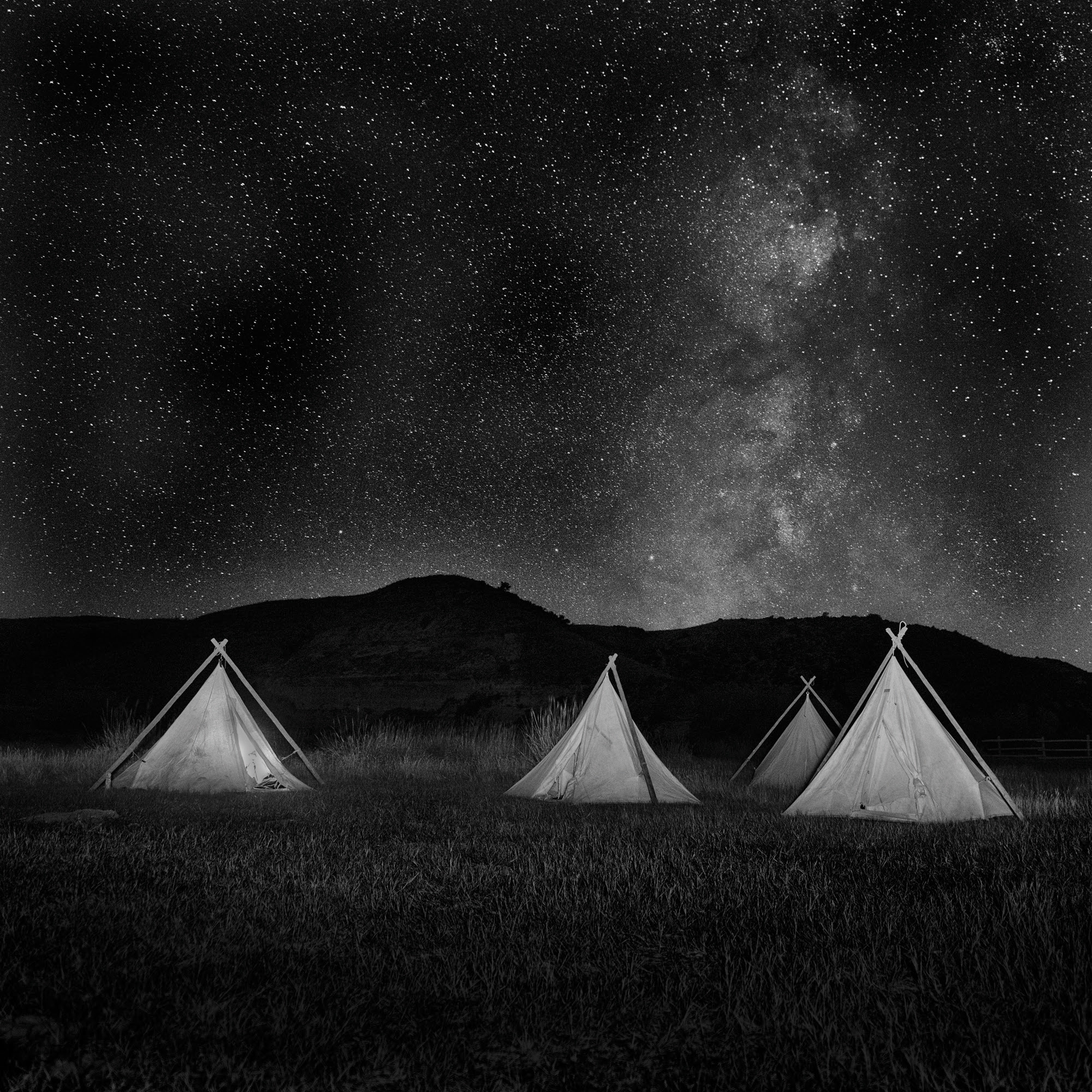 Sometime after midnight, on the Willow Creek Ranch, the Milky Way illuminates cowboy tepees at the camp where Butch Cassidy’s cabin once stood.