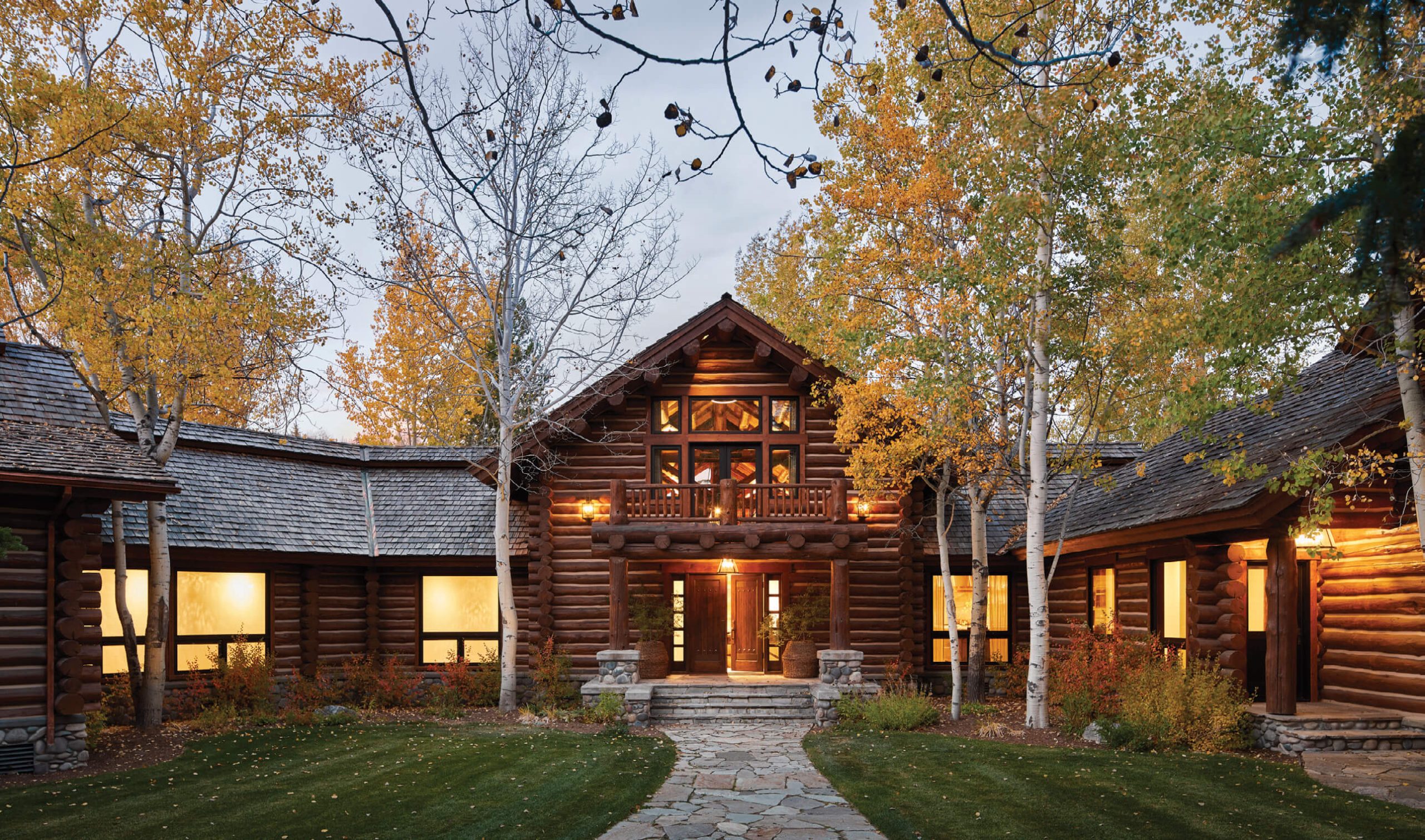 A remodeled log home near Jackson Hole, Wyoming clings to its rustic roots

Situated on 40 acres — once part of a ranch owned by Wyoming’s “Cowboy Governor” Clifford Hansen in the 1960s — a log home near Jackson Hole now sports a 21st-century look and feel while still embracing its Western heritage. Surrounded by three trout streams teeming with browns and cutthroats, the structure was renovated by a hand-picked team that included the original architects, a pair of former Sotheby’s New York co-workers, and a renowned Jackson Hole residential contractor. 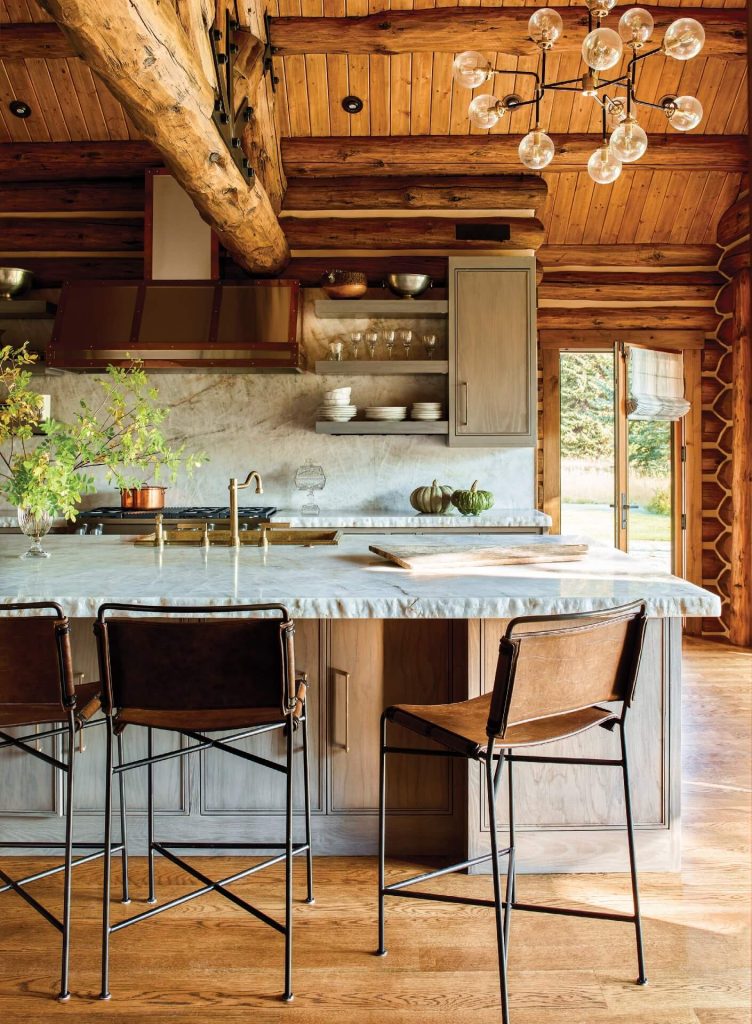 In the kitchen, Jenkins chose quartzite for the countertops and backsplash, as well as state-of-the-art appliances.

The Jackson Hole-based firm Berlin Architects designed the original structure in 1993, and they were called in for a reset after new owners purchased it in 2016. In the process, the home’s footprint grew from 6,000 to 7,500 square feet, but most of the original layout remained in place. “They handled it with great ease,” says one of the homeowners. “And besides, they’d gotten it right the first time around.” 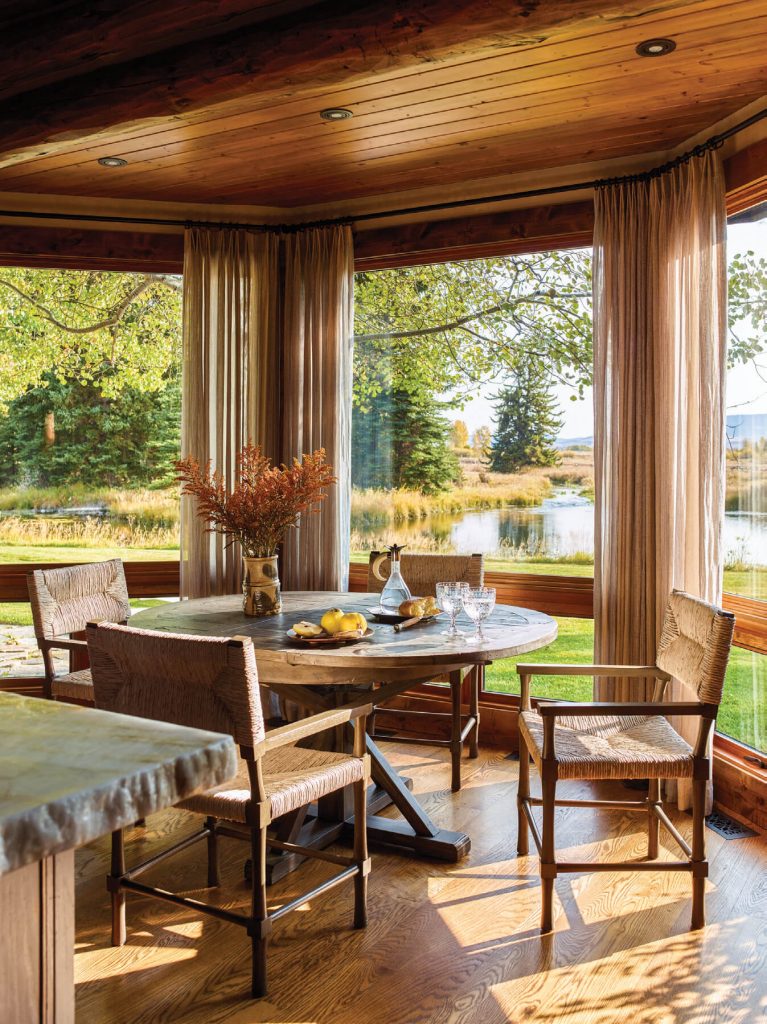 A dining area just off the kitchen is surrounded by windows looking out to one of the three trout streams on the property.

Before she moved to Jackson Hole in 2010, the homeowner specialized in American art for Sotheby’s New York. Coincidentally, Rush Jenkins — then the design director for Sotheby’s — moved to the mountain town that same year, where he co-founded WRJ Design. So, when the time came to consider interiors, the owner called in her former associate. “Rush and I worked for almost a decade together at Sotheby’s,” she says. “I knew I wouldn’t contemplate working with anyone else.” 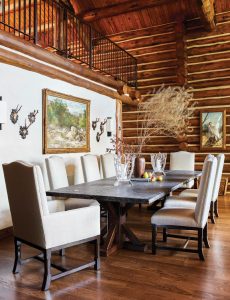 The main stairway and railing were reconfigured with iron to lighten and modernize the heavy pine construction.

She and Jenkins had long talks about the project — eschewing the current mountain modern trend that focuses on glass and steel in favor of a Western classic aesthetic that reflects not just the clients’ tastes, but their marriage as well. “My husband knew Jackson in the ‘70s, ‘80s, and ‘90s, when it still had a rustic Western atmosphere,” she says. “And during the first 35 years of my life, my family spent time in southern Wyoming.” 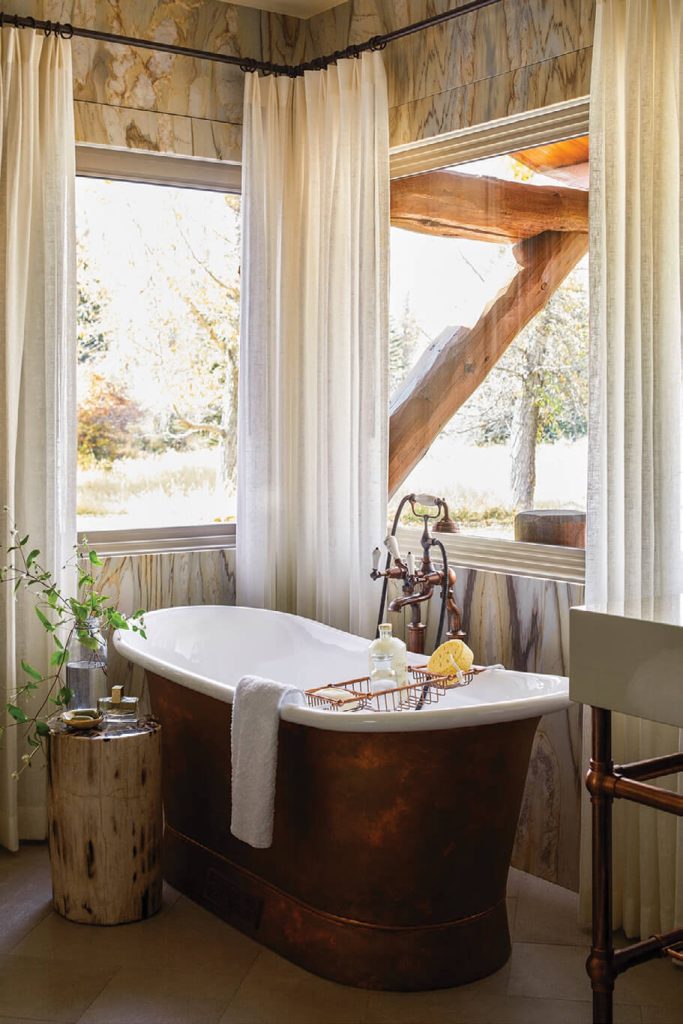 In this bathroom, the standalone tub offers a rustic feel, while the use of granite, tile, and marble add a more contemporary style.

The cabin retains its traditional Western touches, such as the river-rock fireplace favored by her husband, and incorporates her own fondness for cashmere and fur. “We try to make those two balance each other — it’s a marriage of my husband’s history in the valley and the more formal content that I brought to the project,” she says. “We wanted to bring in new design elements, but never attack the structural elements.” 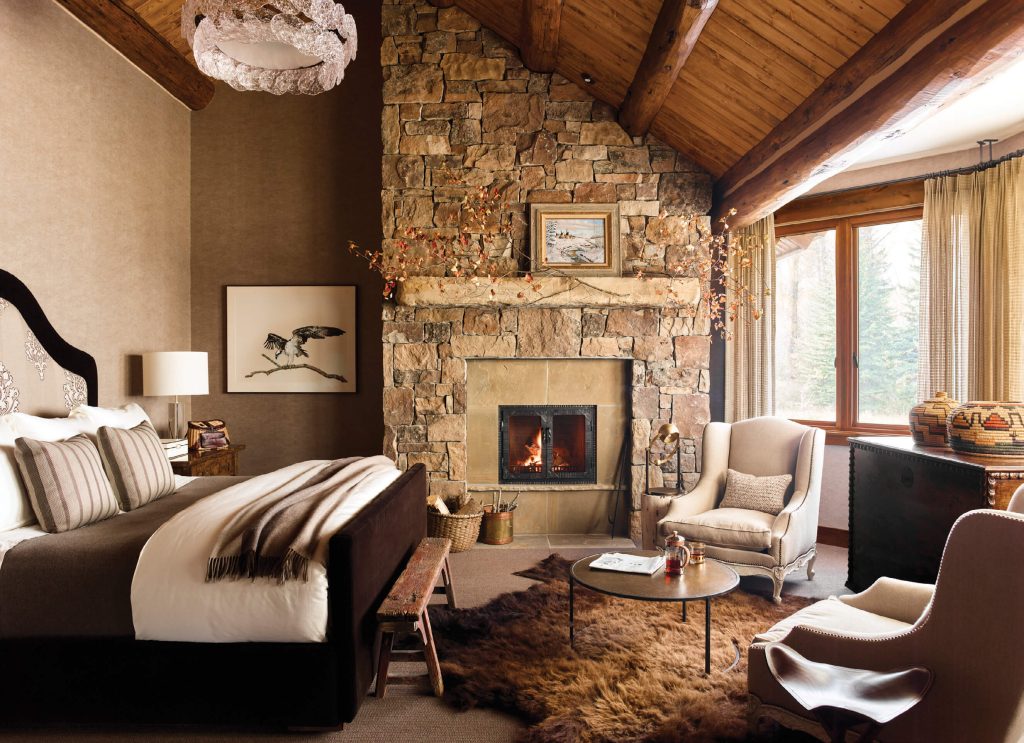 Much of the decor and furnishings selected by WRJ Design reflect what might have existed in a historic log cabin in the West.

The update meant tearing walls down to the studs, gutting the kitchen and bathrooms, expanding the bedroom wing, and replacing all mechanicals. “It was a pretty heavy renovation, but we wanted to keep the integrity of the original home,” Jenkins says. In doing so, he modernized and brightened features without diminishing the traditional feel. In addition, he refreshed some dark pine ceilings with plaster and updated the kitchen with quartzite countertops, a new backsplash, and state-of-the-art appliances. “We wanted to bring in elements of modernism and still feel rustic,” Jenkins says. 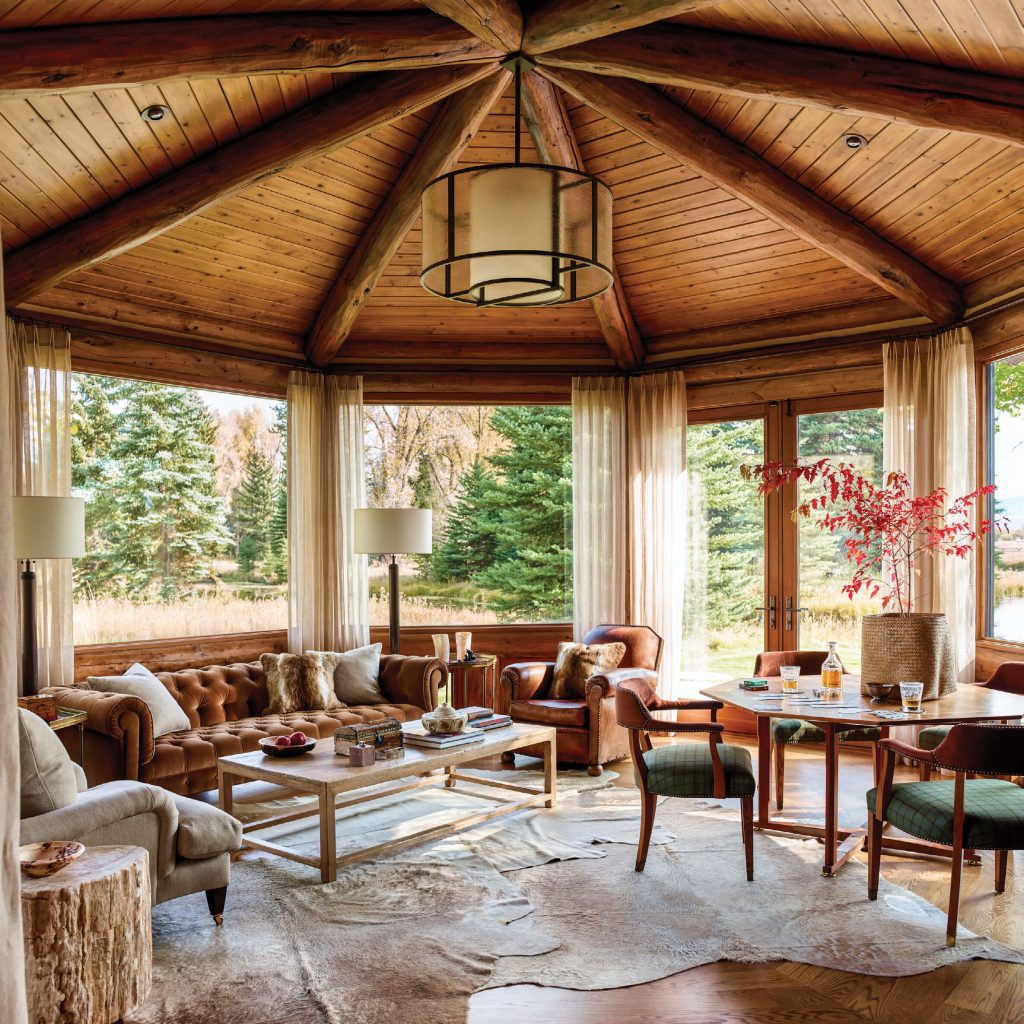 Although the cabin is made from traditional round logs, the abundance of glass lends a mountain modern touch.

Some of the structure’s pine logs had taken on a yellowish-orange tint over time and had to go. “We wanted to warm them up, and one way to do that is to sand them all down, but that’s time-consuming,” Jenkins says. “Another technique is glazing them to a light, warm, walnut color.”

The team also reconfigured the main stairway that leads to a loft above, replacing heavy pine posts with iron. “It had good bones, but needed modern touches and flair,” says Brian Foss, owner of Jackson Hole-based Foss Construction. Foss tackled the plaster finishes, new stone floors, and the granite and marble tiles inside the home. “There was terra cotta tile before — and it was kind of dated,” he says. “So there are new colors to brighten it up a bit and make it beautiful.” 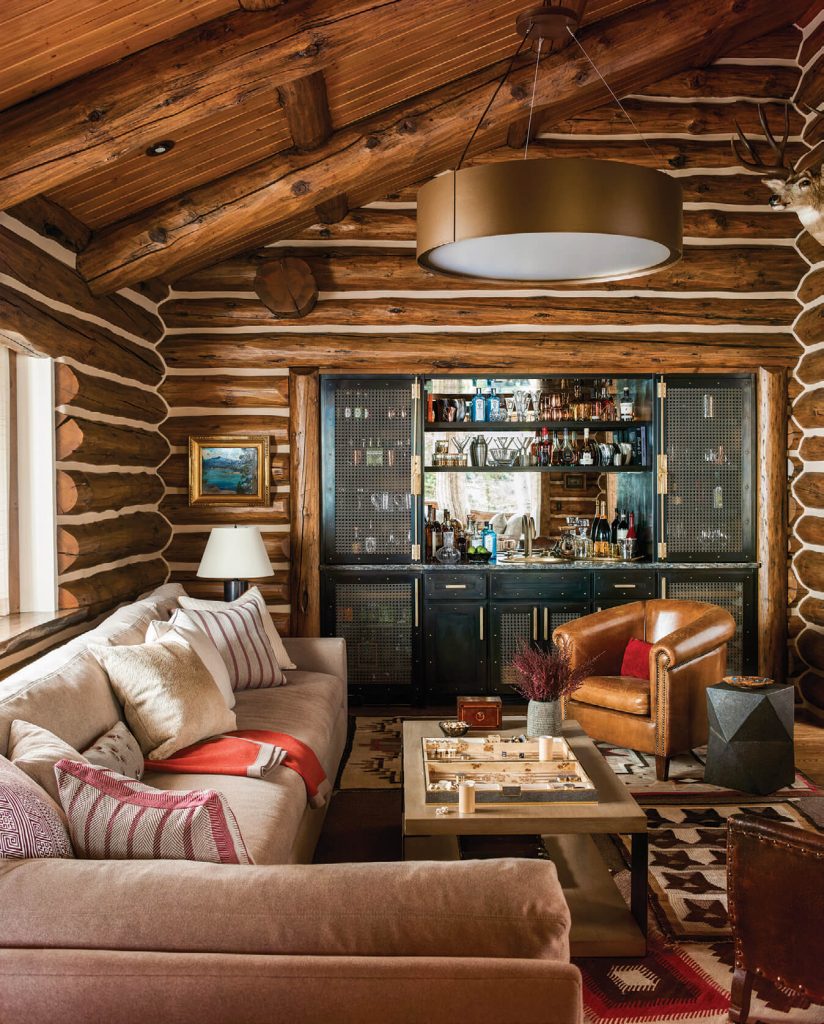 Jenkins updated the bar by adding light bronze mesh to the existing black steel cabinets, while the furnishings he chose created an intimate space for gatherings.

In the bar area, Jenkins added a light bronze mesh to the existing black steel cabinets, achieving a Shaker style. “The bar is the smallest entertainment area in the house, but everybody loves going there because it’s so intimate,” the client says.

Using her broad knowledge of art from the American West, the homeowner incorporated an original Frederic Remington painting that hangs in the entryway, along with works by Edwin Alwin Payne and Frank Tenney Johnson, among others. She also included Navajo rugs from Santa Fe, New Mexico.

Because Berlin Architect’s original floor plan still works, delighting guests is a breeze. The main entertaining area flows effortlessly into the dining room and great room, which centers around a towering river-rock fireplace. “We’ve hosted parties for four people and for 20 — it fit them all incredibly well,” the homeowner says. 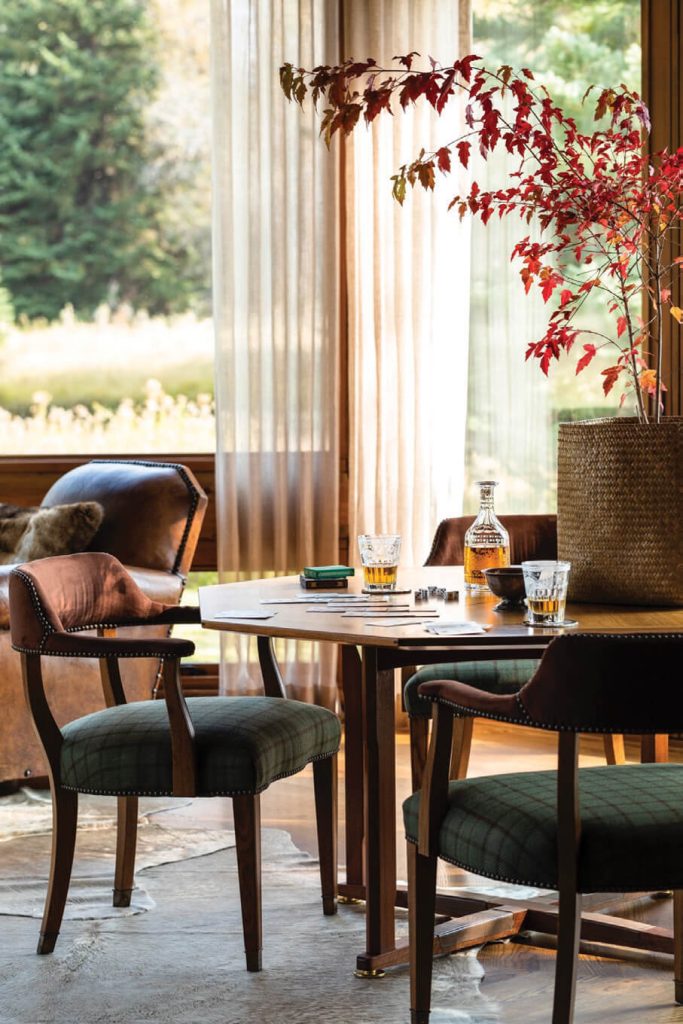 In the end, though, integrating the spectacular Teton Mountain views proved invaluable. “We did a great job of enhancing outdoor spaces for a place where they could entertain,” Foss says. “We made it big — we took out wood beams and added a steel one because that Teton view is unbeatable.”

After all, that vista was the raison d’etre for the cabin’s construction in the first place.