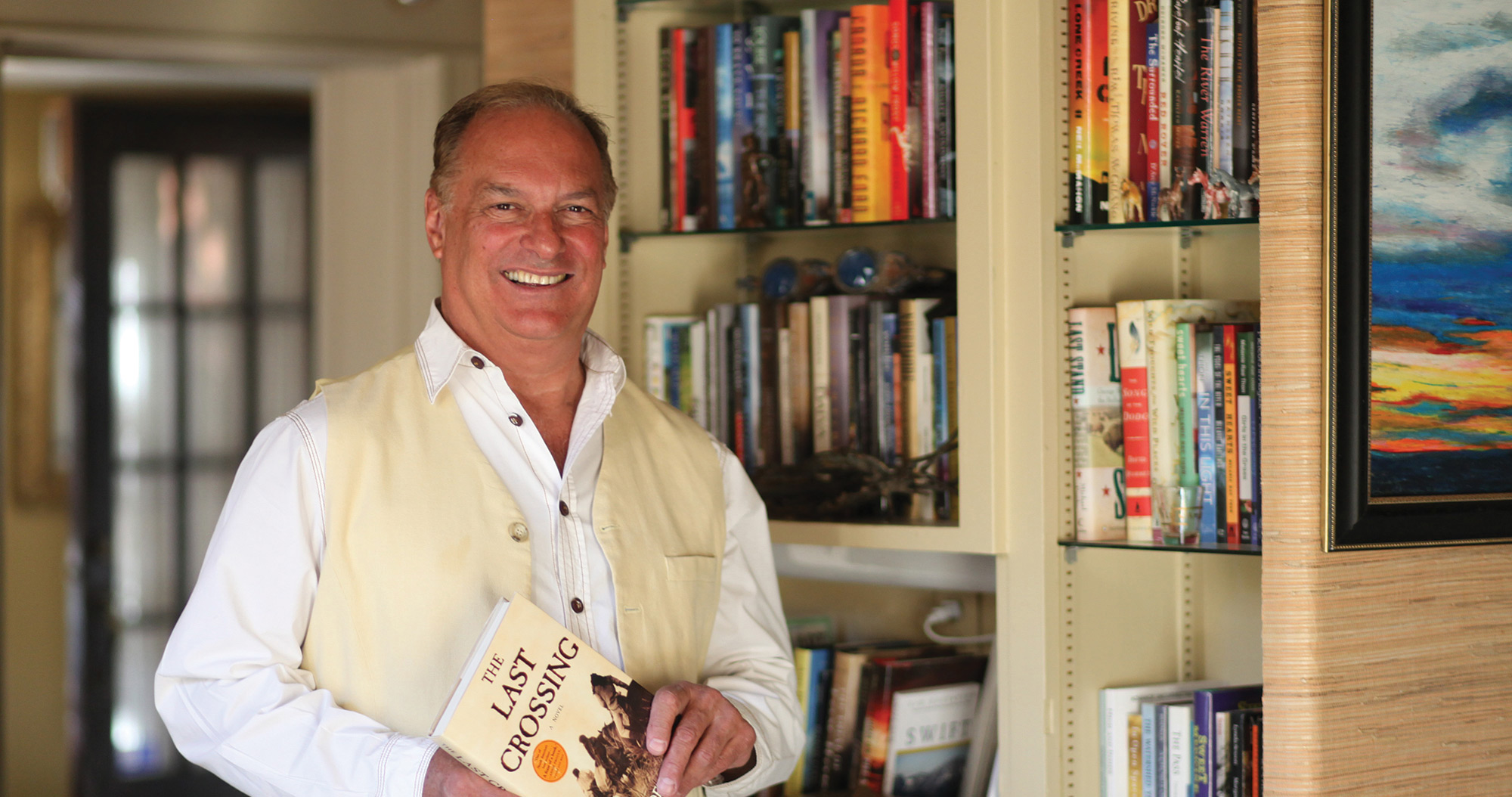 CORBY SKINNER IS A BIG SKY HUMANITARIAN for the humanities. For more than 30 years, Skinner has nurtured and nourished Montana’s creators of words, performers, sculptors, and painters.

He helped raise the curtains at the landmark Alberta Bair Theater in Billings, gave writers a venue with the Writer’s Voice, and honored authors through the High Plains BookFest and High Plains Book Awards. For his efforts in these various arenas of arts, he received the 2009 Governor’s Humanities Award. These days he is promoting the nascent music venue Tippet Rise in Fishtail, Montana.

On an unseasonably warm March Saturday in Billings, Skinner met me at his home. He already exuded the air of summer, sporting shorts and sandals. By early afternoon, he had raked leaves, polished silverware, swum laps at the Billings YMCA, ironed clothes, and completed several book reviews as a reader for the High Plains Book Awards.

When Skinner is working in his official capacity, a vintage blazer and cowboy boots make for his uniform. “He has big city sensibility with country charm,” Kathleen Benoit says. She knows him well, having partnered with him since 1991 in their Billings-based public relations and marketing communications firm. She adds, “He has instinct, wit, and charm. He has all three in spades.”

Bess Fredlund, education director for the Alberta Bair Theater, worked with Skinner in the late 1990s and attended the Association of Performing Arts Presenters Conferences with him. She says, “Corby had an innate ability to discover the next best thing — musicians, theater groups, dance companies — artists who were creating great work and just starting to tour nationally. The combination of his friendly, hip personality along with his keen artistic sensibility resulted in some of the best and most exciting seasons in the history of the theater.”

Skinner’s sense of Montana community came early on. His father, Jack, played for the Billings Mustangs and later worked for the Postal Service, delivering mail. For two decades Jack also acted as the official scorekeeper for the Mustangs. Skinner’s mother, Dottie, worked as a bank teller for U.S. Bank. Together, the two volunteered at Billings Deaconess Hospital.

In Skinner’s youth, he worked at the library back when it occupied the Western Heritage Center, usually arriving by bicycle. “I read the entire Hermitage Collection. It really gave me an appreciation of art history,” he says. After graduating from West High in 1972, he secured a degree in visual arts from the University of Montana in Missoula, and a Masters in Fine Arts in drawing and sculpting from Claremont McKenna College in Southern California.

While in Los Angeles, he reunited with friend Steve Corning to explore possibilities in Hollywood. Skinner and Corning attended rival high schools in Billings, meeting when they competed against each other in speech and debate. In California, the two worked menial jobs on the set of “The Missouri Breaks,” crossing paths with Marlon Brandon and Jack Nicholson. Skinner says of the experience with Corning, “We have been friends ever since.”

In the early 1980s, however, Corning was beckoned home by his father, James, to help run the Stock Exchange Bar, Restaurant, and Disco. Skinner quickly followed, helping to revamp the high-end steak house and launch the attached “Urban Cowboy” themed dance club. The Prairie, as the club was known, became the social epicenter of Billings for the young crowd.

“Montana is such a great place to live. You can do so much here,” Skinner says. For 18 years starting in the early 1980s, he took on programming and marketing for the Alberta Bair Theater. Then in 1991, as director of the Writer’s Voice, he mentored “emerging artists and writers in their artistic and professional development,” and provided programs to enrich the community with an emphasis on arts education for rural youth. He also championed Poets on the Prairie, bringing writers and artists into rural schools for a day of teaching and hands-on workshops, and administered TumbleWords, a program established by the Montana Arts Council and the Western States Art Federation to present Montana writers and their works to communities with limited access to the arts.

“The High Plains BookFest came about when I realized the Montana Festival of the Book was never going to leave Missoula,” said Skinner.  The “high plains” is a 2 million-square-mile region of seven states and three Canadian providences not defined by political borders. He continues, “The first year we had the High Plains BookFest, it was such an affair. Writers were invited to private homes for their presentations.” Fourteen years later, countless authors who write in and about the High Plains have participated in the multiday event through both panel discussions and readings, now held at the Yellowstone Art Museum and the Billings Public Library.

The High Plains Book Awards, the brainchild of Lloyd Mickleson (then chair of the Parmly Billings Library Board of Trustees), was started 10 years ago as an offshoot of the High Plains BookFest. Skinner served on the initial committee, recruiting readers and judges. Devoted to literary works associated with the American High Plains, the awards have given recognition to first time writers as well as established ones. The event has grown from two categories to 11, and the awards dinner, held each year at the Yellowstone Art Museum, was most recently attended by 175 guests. Submissions to the book awards from publishers and authors have grown dramatically from the 12 titles submitted their first year, both in numbers and regional diversity. According to DeeAnn Redman, who coordinates the acceptance and distribution of nominated books, 58 out of the 160 nominations this year are Canadian books.

Skinner believes that “literature is a valued commodity in the West; ranchers and city folk alike share love and respect for a well-told tale, regardless of its national origin. Montana and Canada share a rich cultural history, yet only a few writers such as Richard Ford and Guy Vanderhaeghe have explored those common themes and connections. We have common geographical, historical, and cultural bonds. Yet, despite sharing a border, very few books by Canadian writers are available in American bookstores. I hope the BookFest and awards help to bridge the cultural highway between our two countries.”

Skinner lives in a noteworthy, three-story Billings home built in 1902 by area businessman and developer Austin North. Skinner bought the house from Senia Hart, an arts supporter and preservationist of old buildings, promising to maintain the house’s integrity. With a circular brick tower façade capped with crenellations, the stately mansion — designed by Montana architectural firm Link and Haire — has been nicknamed “the castle,” and is listed on the National Register of Historic Places.

The first floor of the castle serves as a space for Skinner-Benoit Public Relations while the upper floors provide living space and salons for conversation. Skinner combined smaller rooms, opening them into more usable spaces. Three kitchens, on different levels, show his love of cooking and entertaining. Caterer Tom Nelson, who has collaborated with Skinner on many events, says, “Corby is always the life of the party. He’s always ready to do something.”

Skinner is a fan of shopping at secondhand stores, and tableware, dishes, and wine glasses are in abundance. Art pieces interspersed around the home include ceramic work by Marcia Selso, paintings by Larry Pirnie and Ted Waddell, and Jane Deschner’s original Alberta Bair playbill cover. Books overflow on countless shelves, some categorized, many personalized. A vintage piano, owned by writer and longtime friend Christine Meyers, waits to be played.

During his lifetime, Skinner has worked for Harry Belafonte, partied with Ken Kesey, chatted with Yoko Ono, and dined with Allen Ginsberg. He could write his own book. But, he says, “I am not creative as a writer. I am not good at creating stories.” Skinner’s creative outlet manifests in pastel landscapes with skies in colors of blue, yellow, and red. His studio is in the basement where he paints while watching old movies. “I don’t want to be too literal,” he says of his art.

But for the world of thinkers and realizers, especially here under the Big Sky, Skinner has focused light — both figuratively and literally — onto the works of countless artists, performers, and writers. Over his career, he has promoted creativity, providing a strong and active voice for humanity. 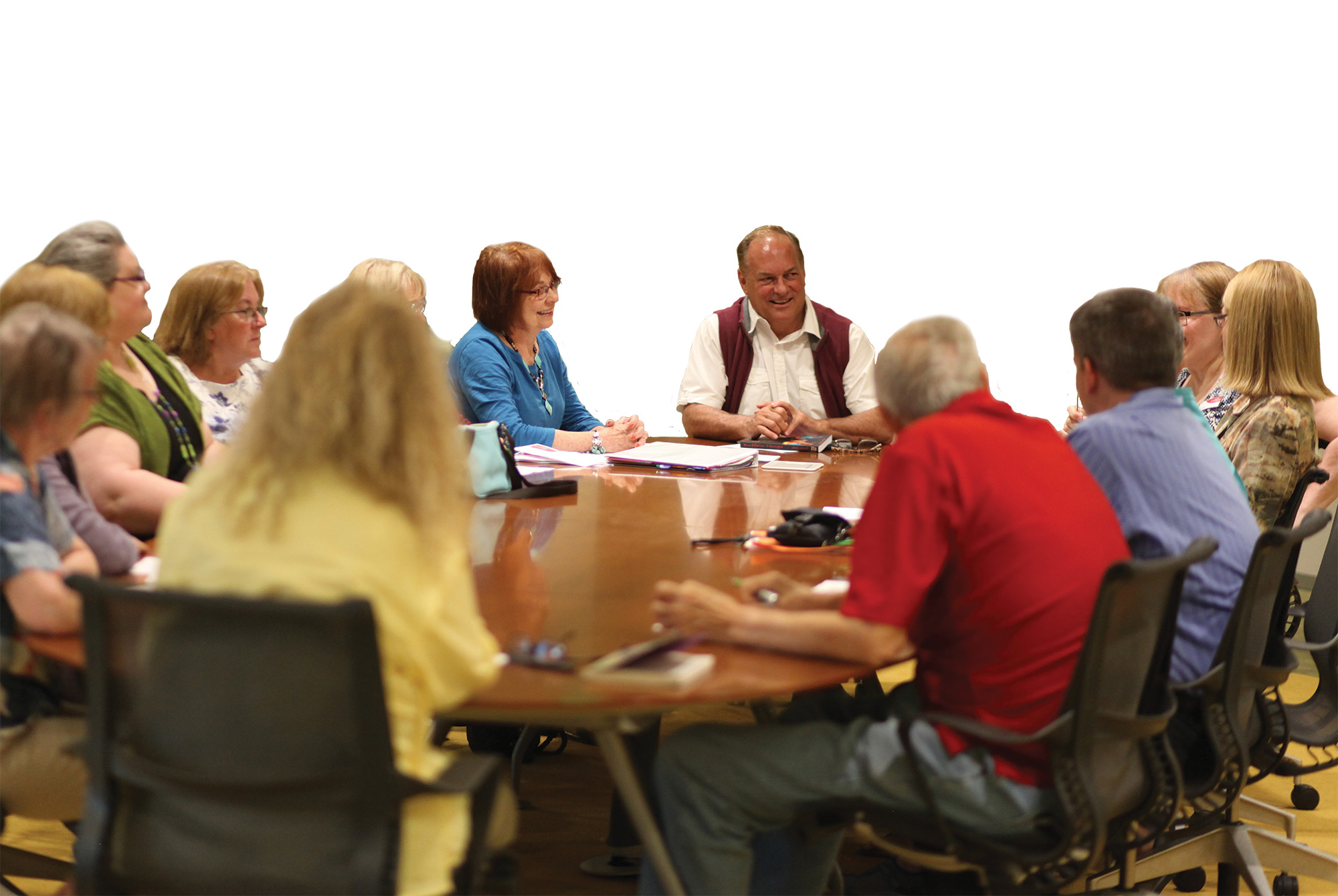