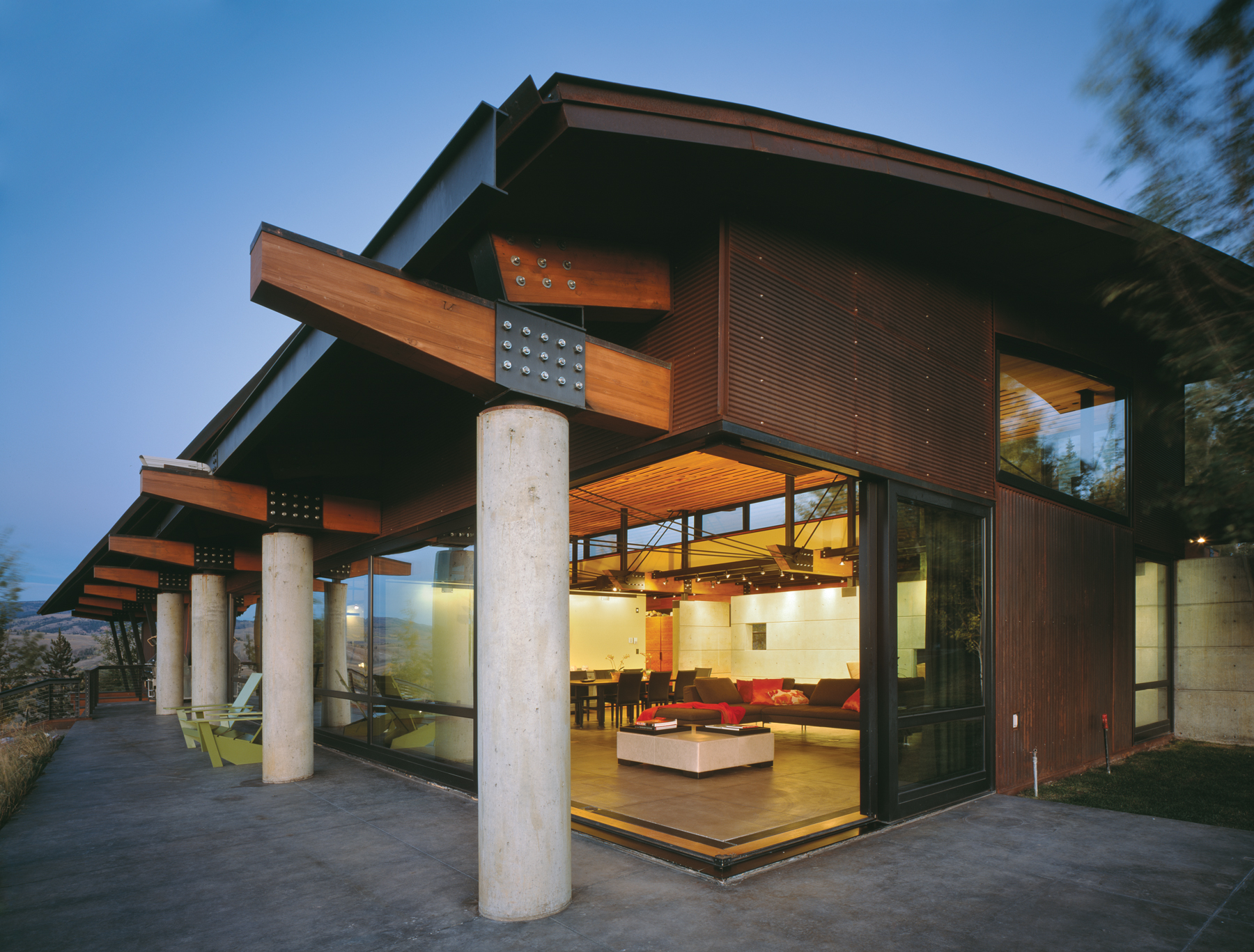 The metal-topped, oversized conference table in architect Stephen Dynia’s Jackson, Wyoming, office is a mess. Twin giant computer monitors barely escape from stacks (and stacks) of books and magazines. There are loose sheets of tracing paper, ubiquitous to any architect’s office, but here exploding everywhere from between everything. Some sheets have notes scribbled on them. Others are sketches of design ideas — from a house to a corner detail to a cabinet. There are meaty sets of architectural plans, neatly rolled and secured with rubber bands. Some are wedged between stacks; those on top of the pile look to be in imminent danger of tumbling to the floor.

As cluttered as Dynia’s desk is, his designs are the opposite: clean and considered. A home he did 14 years ago in the tiny hamlet of Kelly north of Jackson, remains one of his favorite projects. “It has a simple functionality that highlights the landscape and organizes the interiors with a structural system that reads very clearly throughout the house,” he says.

While visitors notice and feel the 7,200-square foot home’s simple functionality and organization, more intriguing, especially when it was built in 2000, were the materials it was built from. In a sea of log homes — and in 2000 Jackson Hole was still very much in its log McMansion phase — this is glass, steel, concrete and metal. Dynia didn’t use a single log. “Logs are a sacred representation of something more than they are a building material,” he says. “There is a role for logs, but not necessarily as the form of a home.”

Dynia’s designs aren’t just clean and considered, but also modern. And they have been since the moment he arrived in the valley in 1993. “When I came to this community, I found no one doing modern work,” he says. “I’d hear from architects that they’d like to do modern work, but that clients wouldn’t let them. There was an issue of leadership that is not unique to architecture. Sometimes you have to lead clients in new directions that they may not be able to fully understand until they appreciate the results of at the end of the day.”

Dynia was drawn to Jackson Hole because it was an entirely different world from Manhattan, where he had lived from 1985 until 1992 and where he worked at Skidmore, Owings & Merrill, designing projects in major cities around the world. “I came to Jackson out of an odd sense of fidelity to New York,” he says. “I couldn’t move to another city, so I thought moving to a place that was exactly the opposite world would offer an interesting contrast as it relates to architecture. New York is about the built environment and here it is very nature-inspired — using light and dealing with the effects of climate.”

Dynia got around the issue of having to talk clients into modern homes by being his own client. Among his first projects in Jackson were a pair of 750-square-foot homes in downtown Jackson. They were literally cubes, 28-feet wide, 28-feet deep and 28-feet tall. Dynia lived in one. Built in an alley that was a “curious mess” — “there were sheds, tipis, yurts, and shacks all around,” Dynia says — they were controversial. “Whenever you introduce change you have to expect controversy,” he says. “Most of the time it’s just because something is different.” These cubes were different. “They were game changers,” he says. “They were foreign to the vocabulary of what was going on in town. These were anti-style, they were about a response to a program.”

They also featured what has become a Dynia hallmark: buildings that claim more than their own real estate. Both cubes have rooftop decks, or “garden floors” as Dynia calls them. “You get up there and it’s just magical,” he says. Above the alley’s curious mess, there are expansive views of Snow King Mountain. Summer evenings, residents sit on their roofs and listen to Snow King’s free concerts or watch mountain bikers tearing across the slope.

The controversy over the cubes is long past. Today, pedaling around East Jackson, the densest area of downtown, and the area the cubes sit at the edge of, it’s easy to see what Dynia means when he calls them “game changers.” East Jackson architecture no longer suffers from the “stagnation” Dynia found in the early 1990s. Instead, blocks from the Town Square there’s the glass, wood and concrete Jackson Hole Center for the Arts and its 500-seat Performance Pavilion, which Dynia designed. On side streets, it’s difficult to go more than three blocks without passing a newish — or still under construction — home that has more in common with the cubes than a log cabin. “I don’t look for something to be controversial for controversy’s sake,” Dynia says. “That is a misconception. Anything I do is based in logic and some kind of innovation.” 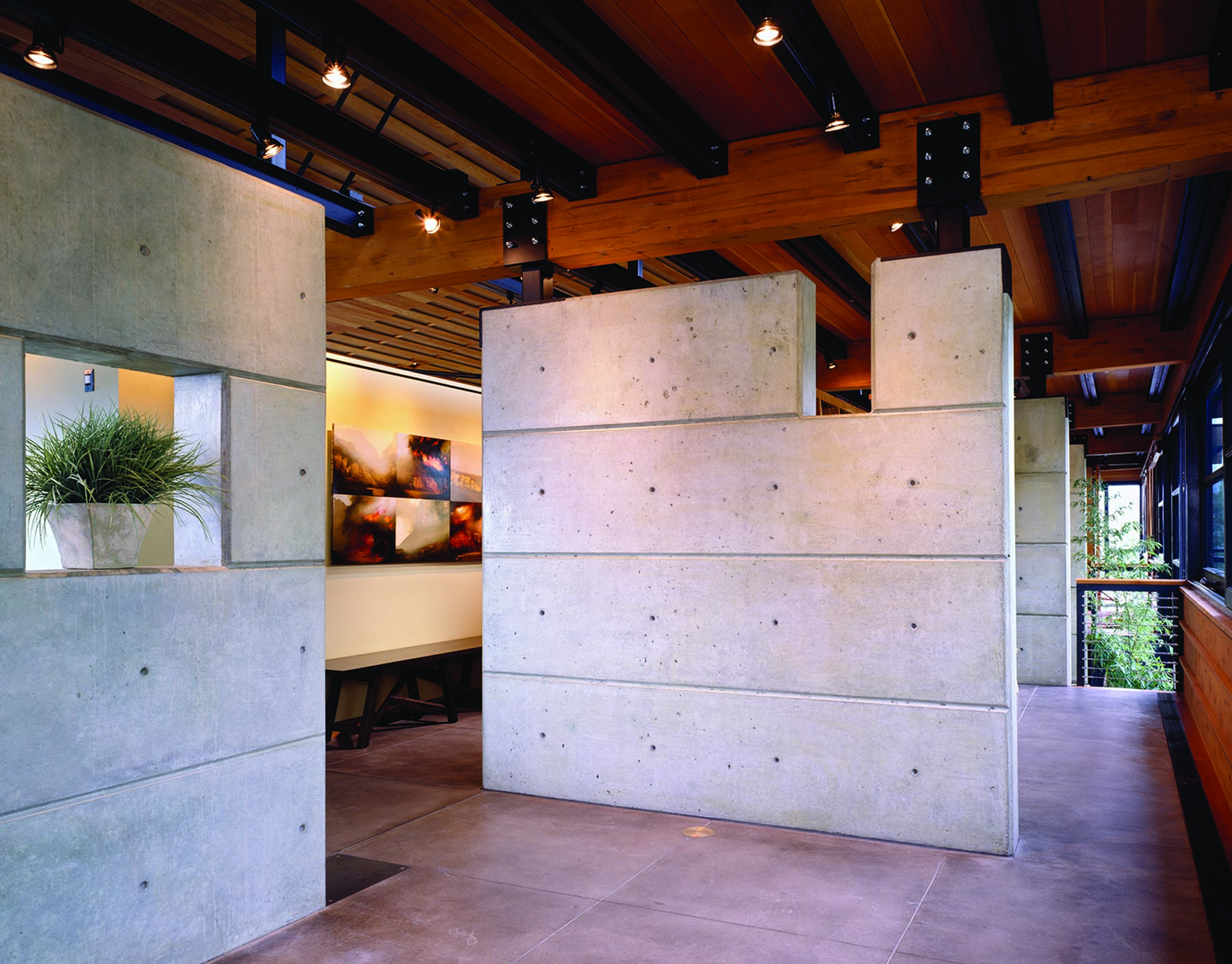 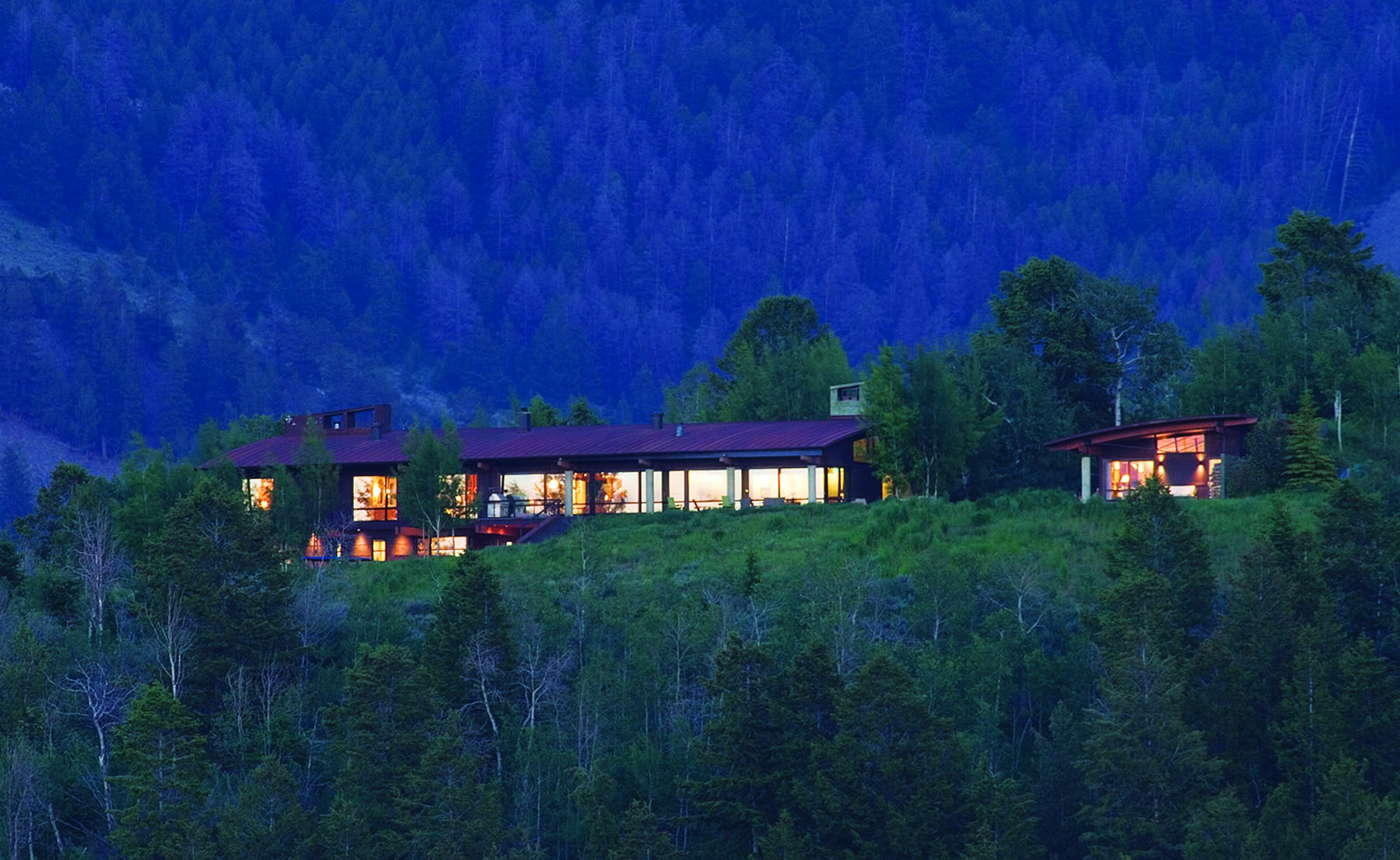 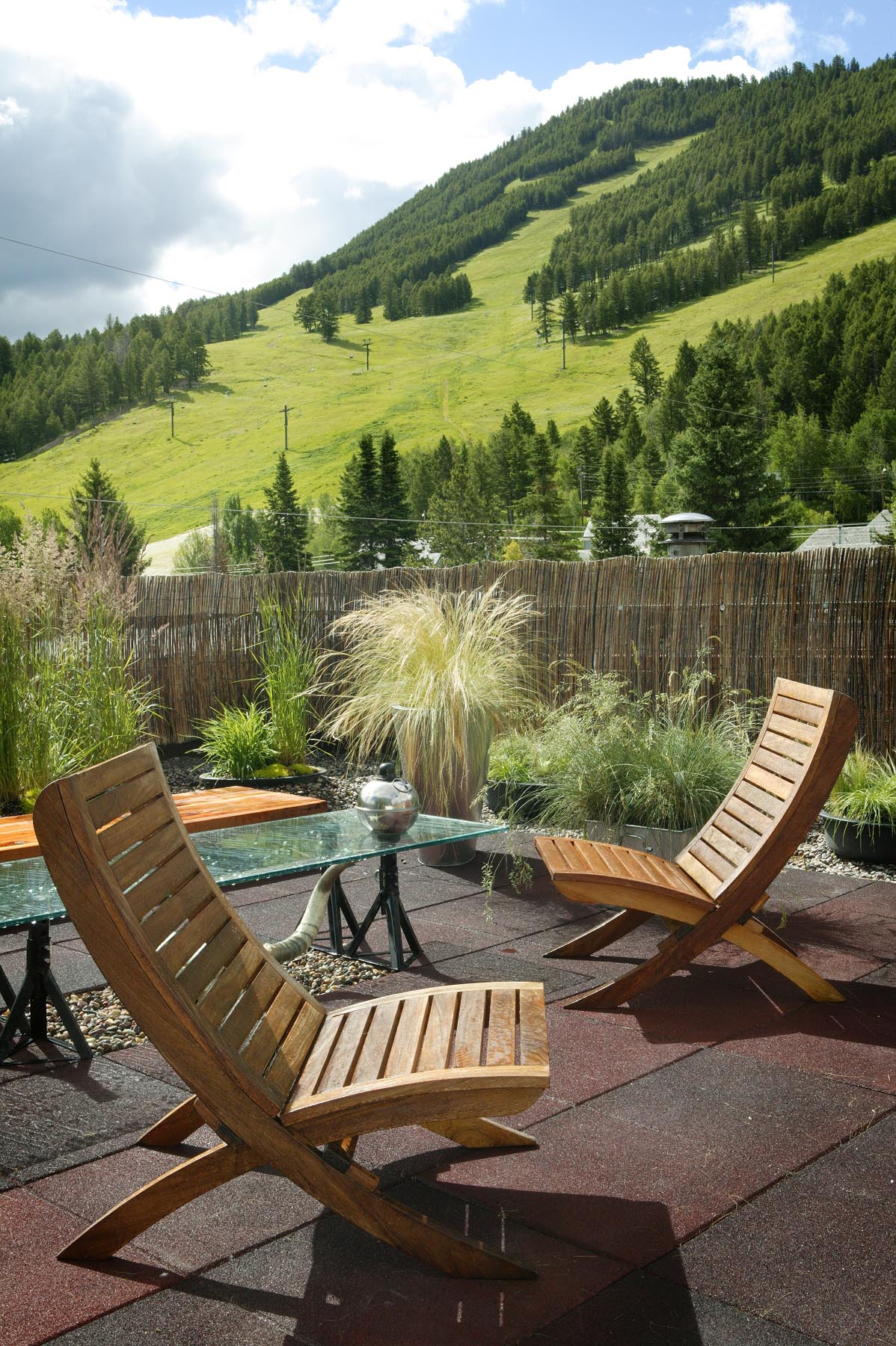 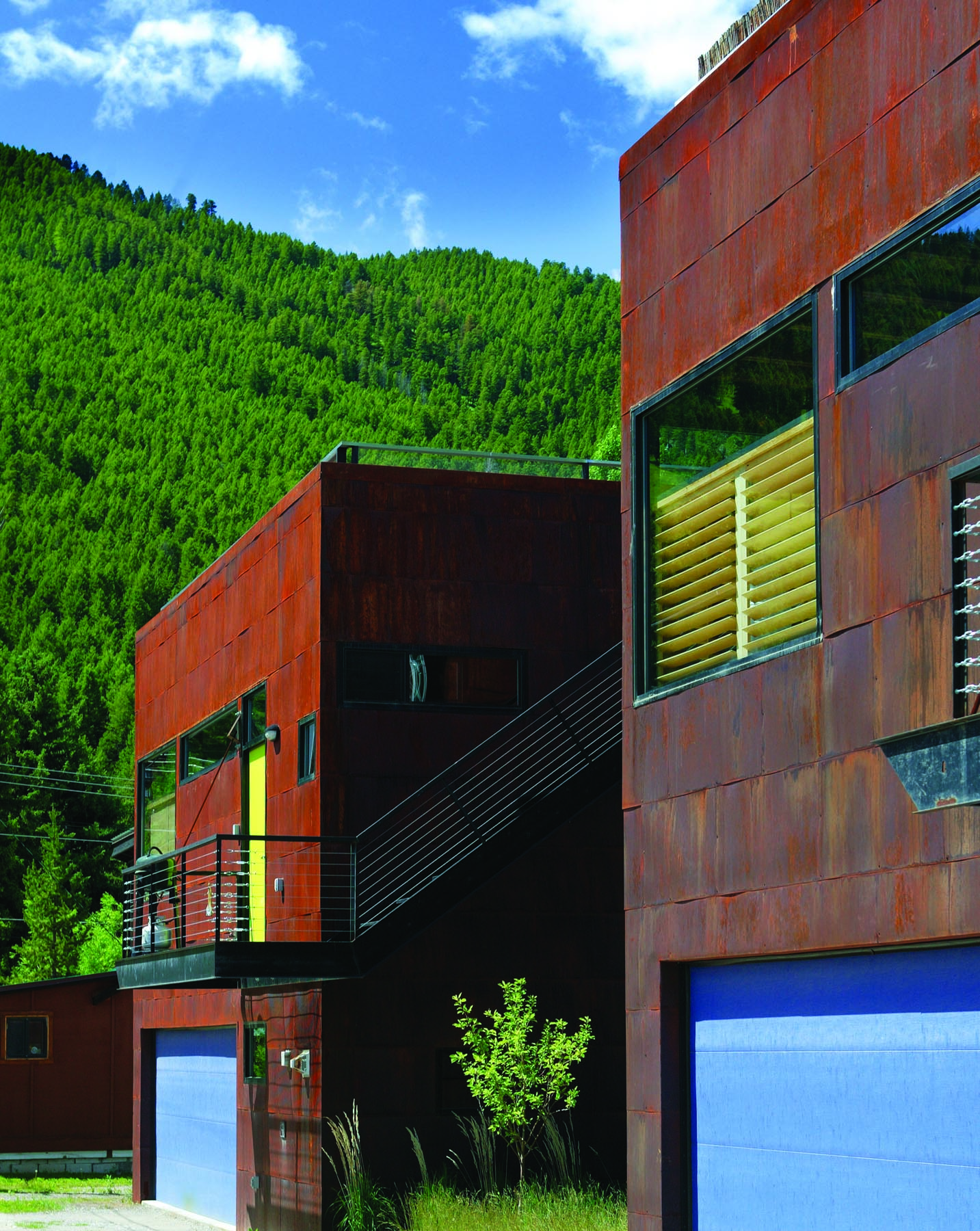 Architect Stephen Dynia’s body of work in Wyoming reflects his urban roots, as seen in the use of concrete, steel and glass for this Wyoming residence. Simplicity and discipline of form allows for an openness that places the surrounding environment in the greatest focus. – Paul Warchol