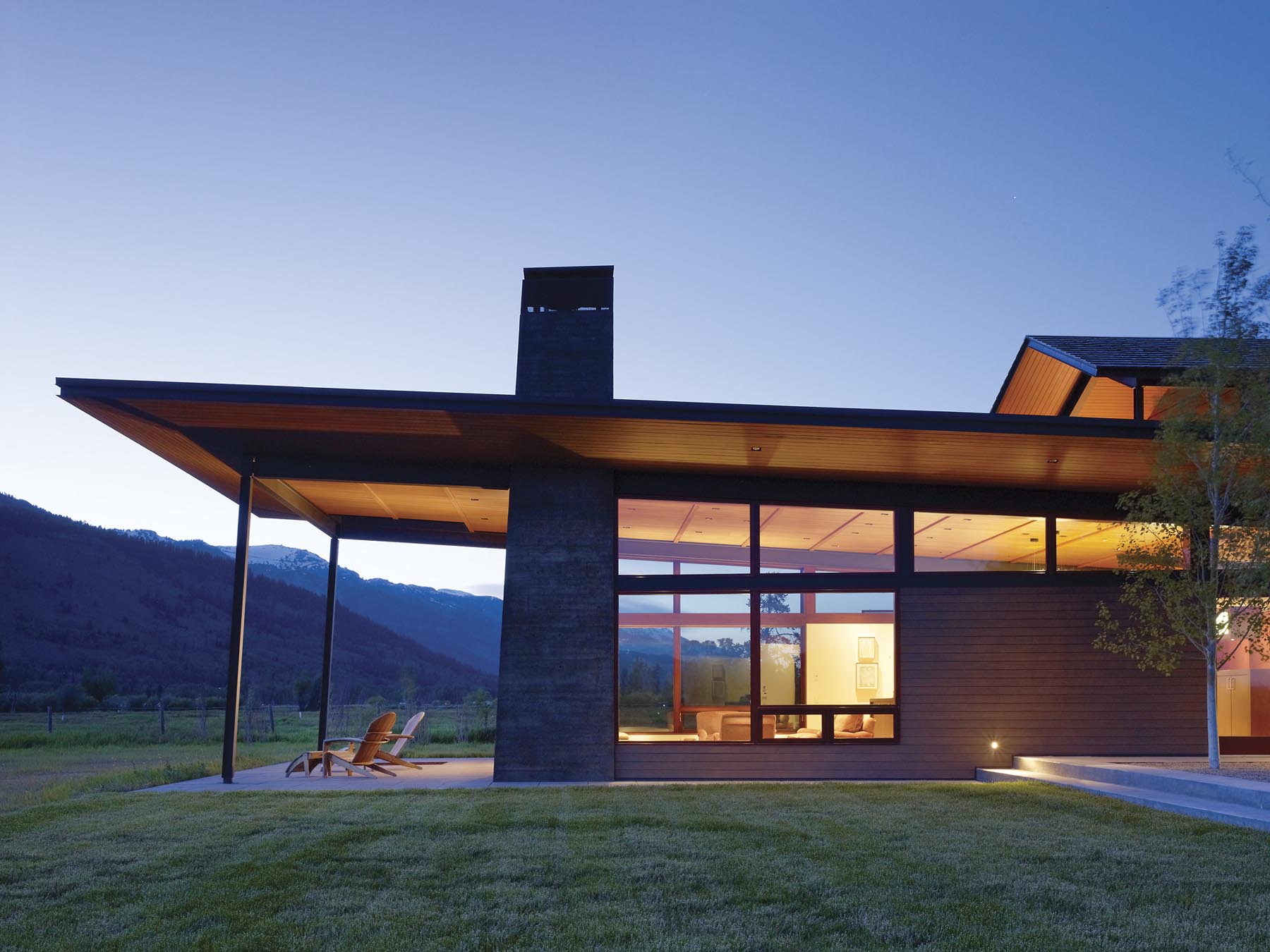 “Part of the success of our firm is the culture we’ve created here,” says John Carney, co-founding principal at Jackson’s Carney Logan Burke and a Fellow of the AIA. “There’s a Wallace Stegner quote — ‘When the West fully learns that cooperation, not rugged individualism, is the quality that most characterizes and preserves it, then … it has a chance to create a society to match its scenery.’ We bring that idea to our firm. We’re collaborative; in a room everyone’s ideas are as good as anyone else’s. The end result is that the whole is greater than the sum of the parts.”

Don’t look for closed doors in the East Jackson office building that the 21-person firm designed for itself and has occupied since 2000 — Carney Logan Burke is one of the area’s most prolific and diverse firms. It was named the AIA Wyoming Firm of the Year in 2004 and the 2009 AIA Western Mountain Region Firm of the Year.

The new 45-story Four Seasons Hotel & Residences in Denver? Carney Logan Burke was the Design Architects. The firm also did, in 2008, the lower tram terminal enclosure for Jackson Hole Mountain Resort’s new tram. Its most-written-about building may be the Laurance S. Rockefeller Preserve Interpretative Center in Grand Teton National Park. Opened in 2007, it was the first LEED platinum building in Wyoming and the National Park Service.

And of course Carney Logan Burke does residential projects — they’ve done over 100 of them so far. They’ve added a 300-square foot wine silo to an existing building located in the Snake River floodplain (which made a traditional wine cellar impossible). It received awards from the AIA Western Mountain Region, Custom Home and Residential Architect and was featured in Big Sky Journal’s 2008 Arts Issue.

A 3,700-square foot modern reinterpretation of the log cabin on an open site encircled by the New Fork River near Pinedale, Wyo., won a 2007 AIA Western Mountain Region Citation Award, a 2007 Residential Architect Merit Award and a 2007 Custom Home Citation Award. In our last HOME issue, we wrote about a Carney Logan Burke house on the Snake River in “Creating a Dream.” “That took serious influences from both clients,” says principal Eric Logan, AIA. “The desire there was to make the home responsive to its site and Jackson, where the wife had lived for 30-some years, and also, because the husband grew up in France, for it to have a sense of the timeless quality of old European buildings.”

Logan says a 6,400-square foot contemporary home in a subdivision with strict covenants and restrictions has some of the best interior spaces the firm has ever done. Because of the subdivision’s strict design guidelines, the same home also has one of the most interesting exteriors. “We had to make the home look traditional from a distance; as you get closer though, the clean, contemporary elements the owners wanted become apparent,” Logan says. “The overall effect is of a vernacular building from a distance which, when experienced, reveals its roots in Modernism.”

“We have a love of traditional forms, but a much more Modernist aesthetic,” Carney says. “We work within vernacular forms, but challenge ourselves to interpret them in a fresh way.” The LSR Preserve interpretative center is a perfect example of this. Walking into it, it evokes some traditional national park forms, but you’d never mistake it for a building from the 1920s or 1930s.

Carney founded the firm in 1992 from a successful practice in Denver. “I’d visit with architects in Aspen and Telluride and see that they were making a great living working on challenging projects, but cancel meetings when it was a powder day,” Carney says. “A light went off that I could live in a beautiful mountain community and still be an architect.”

Carney was drawn to Wyoming because he had spent his childhood summers at a family ranch on the Upper Green River near Cora, Wyo. “I realized that if we were going to do this in Wyoming, it would have to be in Jackson,” Carney says. The firm was founded in a rental house in Teton Village. Carney would work at the dining room table. The printer was in the garage.

A few years later, Logan, who grew up in Wyoming and had worked with Carney at his Denver firm, wanted to return to his home state. “Eric was still young, but very talented,” Carney says.  “When I left Denver, I told him that if he ever wanted to relocate to Jackson, I’d have a job for him.”

After a few more years, Kevin Burke, AIA, joined the firm’s ranks. Like Carney, Burke spent his childhood summers in the West. Where Carney was in Cora, Burke was dividing time between grandparents in northern and southern Idaho.

“Very early on, I knew the West was where I wanted to be,” Burke says. “The plan was always to head West as soon as I had finished up school on the East Coast.”

Burke spent a couple of years working in Idaho before moving over to Jackson and a couple of years working for another Jackson firm before joining Carney. “[Carney] was on my radar and I had my eye on them,” Burke says. “They were doing amazing work and I told myself — and my wife — that if there was ever a chance to work with them, I’d take it.’ It wasn’t that much later that just that opportunity presented itself.”

Logan and Burke were made principals at the firm in 2005. “I’m really grateful to John for seeing the wisdom in having partners,” Burke says. “It is a beautiful triumvirate. We all have our strengths and weaknesses and play off each other.”

While Carney Logan Burke designs projects across the West — and around the world; they’ve worked as far a field as Hertfordshire, England — it is important to the partners to be part of the Jackson community. “We moved to this place to try to make it better through our craft,” Carney says. Few doubt they have, from the countless residences they’ve done to the LEED certified Jackson Hole Airport expansion in collaboration with Gensler Architects, the new Home Ranch Welcome Center presently under construction, the Center for the Arts in downtown Jackson, and the new Jackson Hole High School. “When we first started thinking about the high school, all I could think was that we’re going to affect more kids through that than through all of our other projects combined,” Carney says.

“I think our work has tried to fit into the community while also pushing the envelope a bit,” Carney said.

“I think the funny thing is that we’ve lost jobs because some folks think we’re a bit schizophrenic,” Burke says. “We don’t have that signature style some other firms do.” Logan says, “I guess we’d rather be known as a firm full of creative problem solvers that do high quality work than as a firm where everything looks the same. How much fun is it to get up every morning and do the same thing?”

Directly across from Carney Logan Burke’s modern-yet-full-of-western-character office building is the Bear Creek Office and Residence. While the CLB office used materials such as stained concrete and exposed steel structural elements, the Bear Creek building is stone with cedar siding; re-sawn timbers support the generously overhanging roof. Inside there are log columns, iron railings, and more massive timbers.

“It’s a hard thing to drive home,” Burke says. “Our work reflects whatever the clients want to do. If they’re looking for traditional and rustic, that’s where we go. Clean and modern? We do that. Having a variety of projects keeps the mind fresh and forces you to think differently.”

“We can do – and like doing everything from a little cabin to a high rise in Denver,” Logan says. “What a span for a bunch of guys in a little Wyoming town.”

with its expansive shed roof, tilts up to recognize views and capture daylight for the primary living spaces. Broad overhangs, articulated in wood, taper to a thin steel “brim” that protects the buildings from harsh western weather. 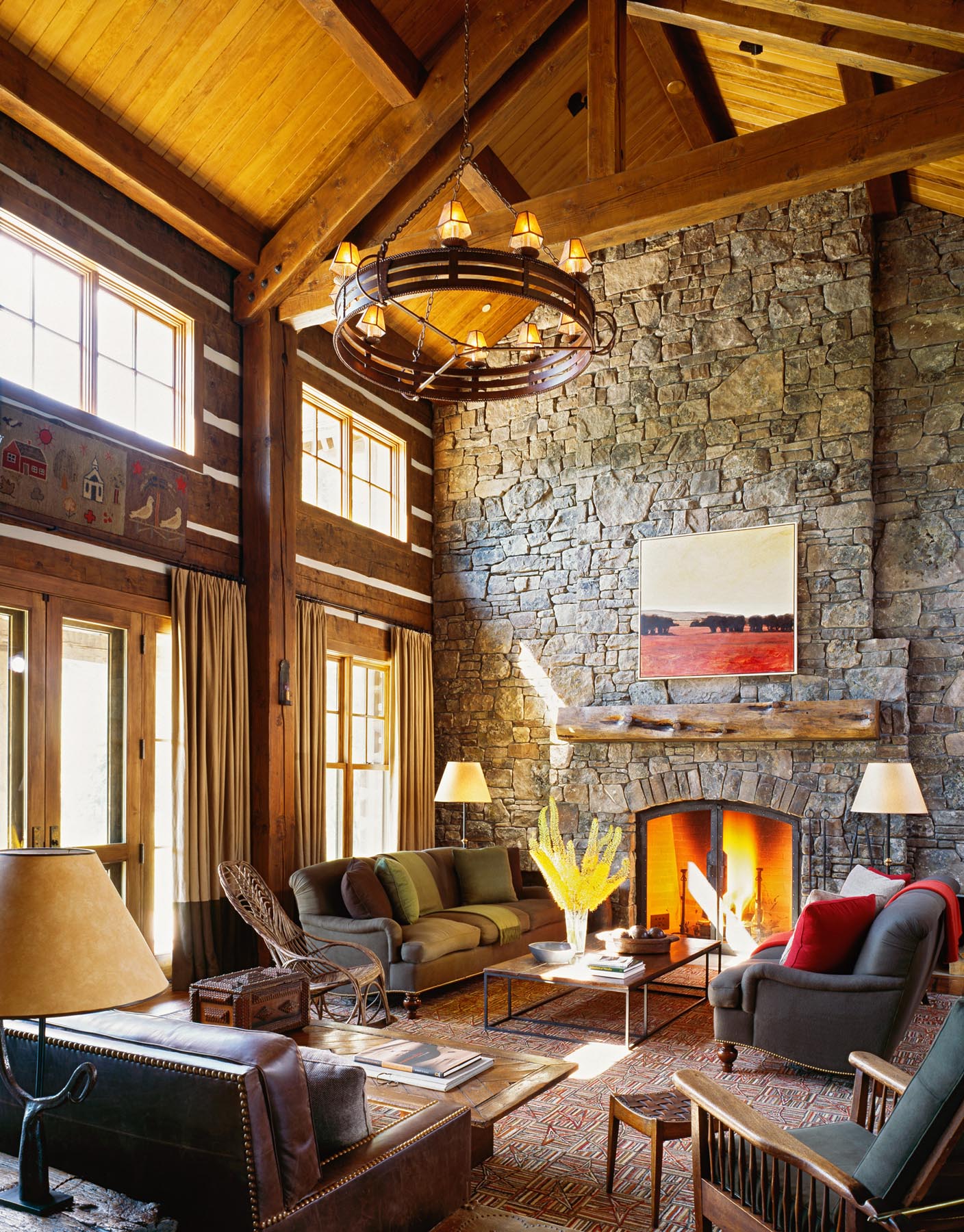 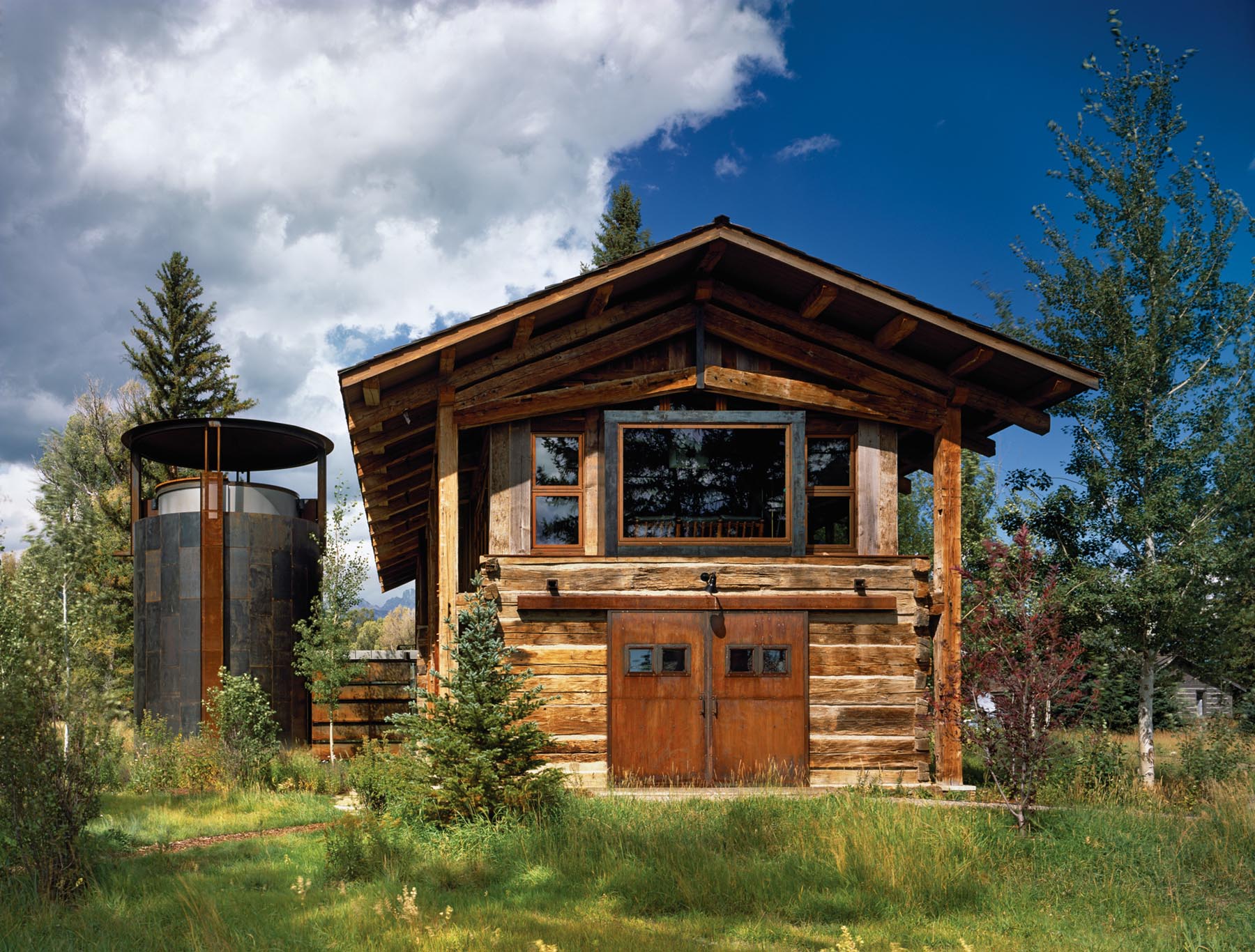 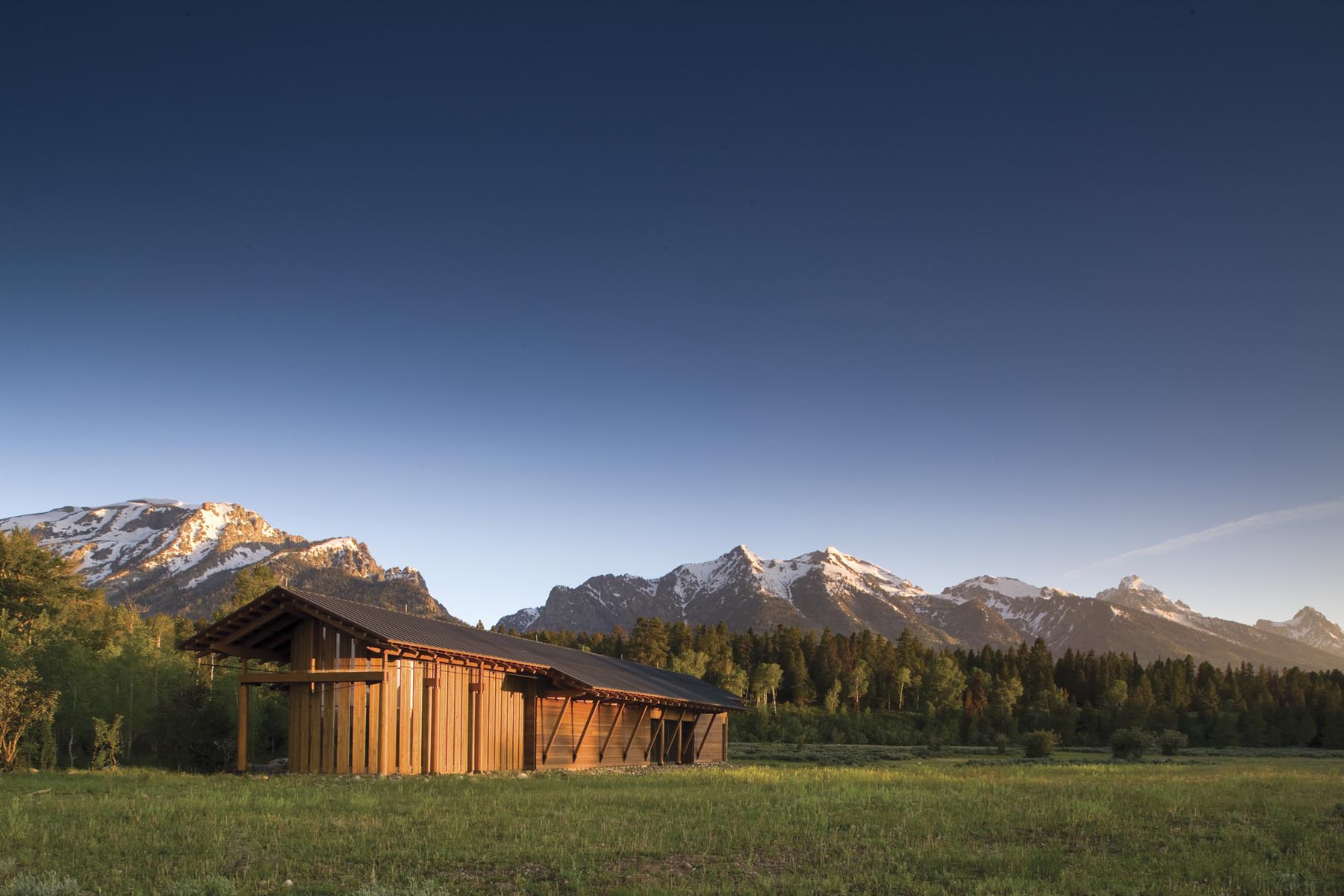 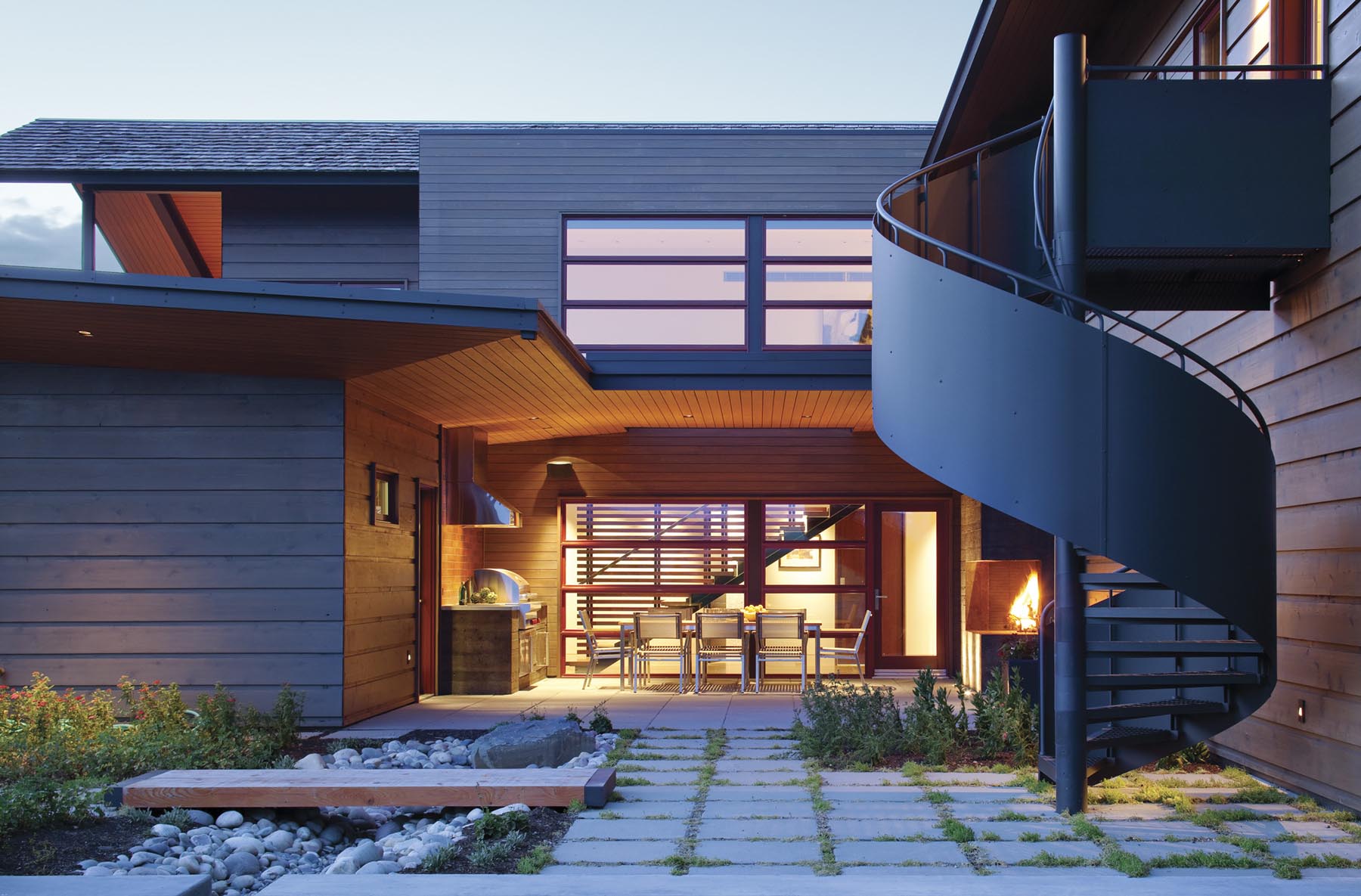 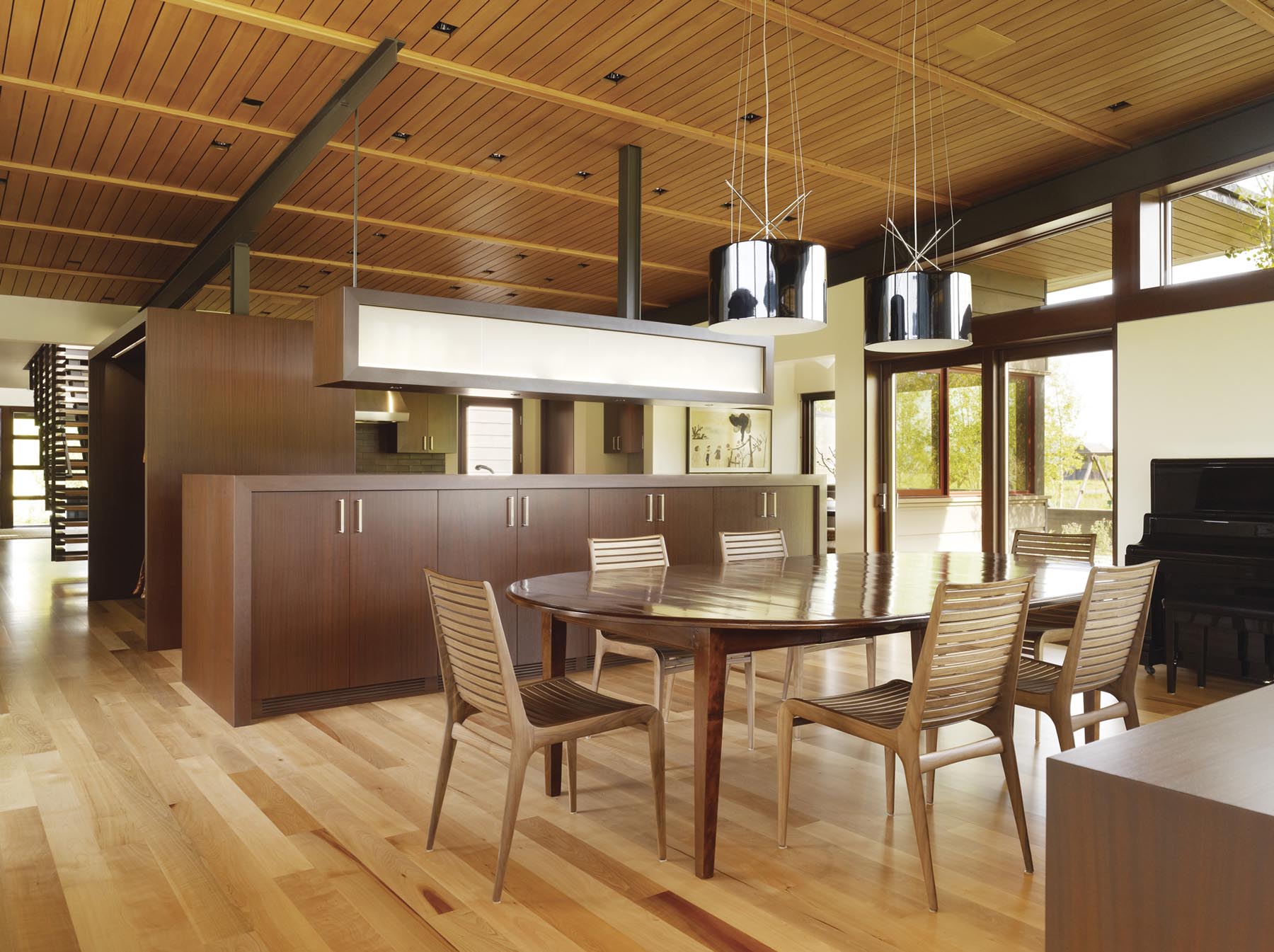