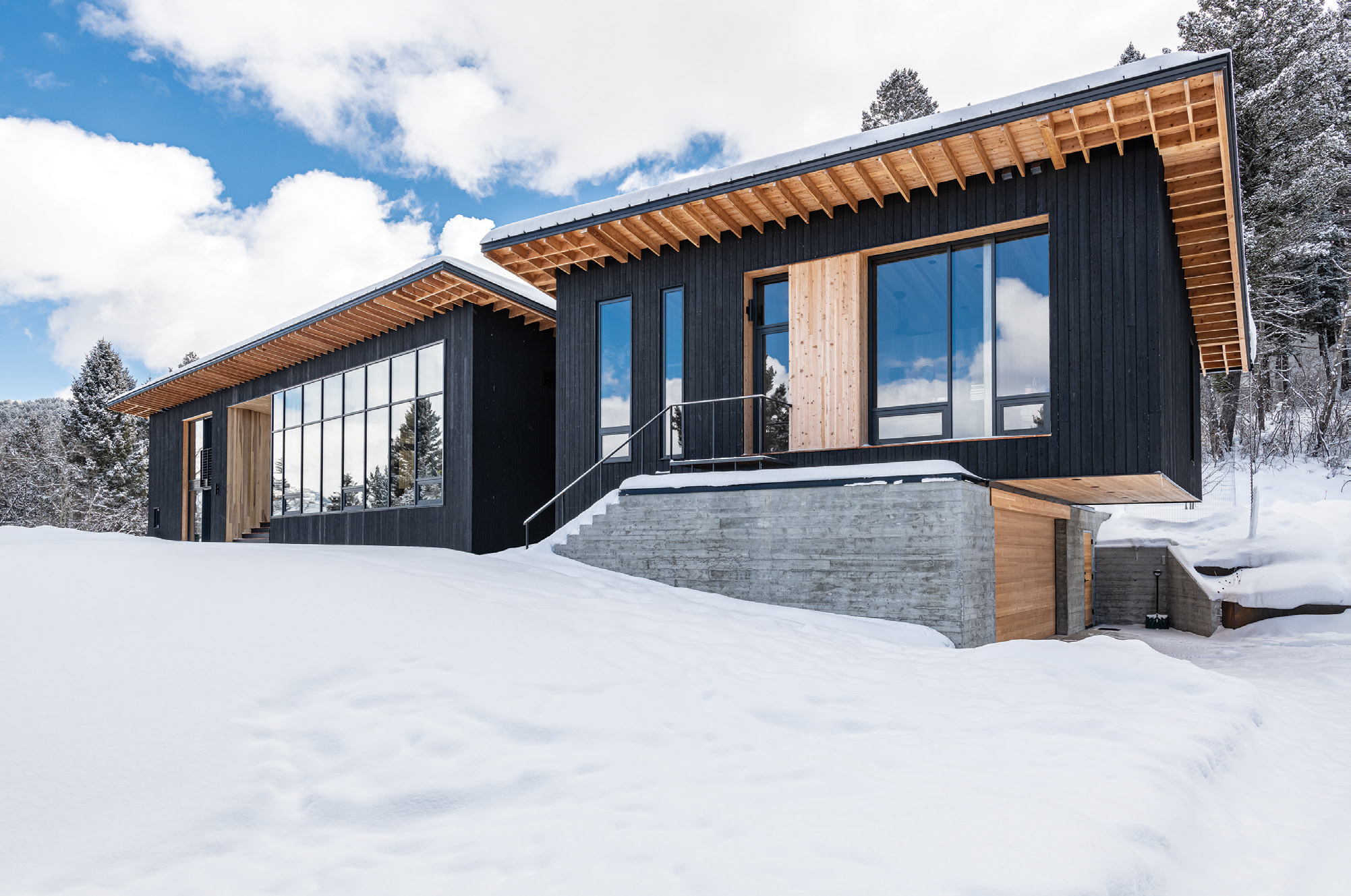 Carpenter Terry Cunningham worked exclusively on doors, perfectly aligning their grains with those on the walls.

07 Apr Comfortable Modernism in the Mountains

MANY THINGS BECOME MORE BEAUTIFUL AFTER they break: a flat expanse of winter’s ice, for example, when it cracks in deference to spring’s welcomed warmth; or a song when its familiar verse-chorus-verse pattern is broken by a bridge. A new home nestled in Bozeman, Montana’s Bridger Canyon achieves a similar transcendent beauty for the same reason. Its long, rectangular shape — which is parallel to the steep slope on which it sits — is slightly broken. And the bend in the rectangle was a decisive point in architect Doug Minarik’s creative process. 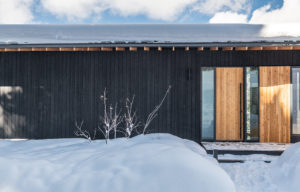 The home’s modest height and horizontal layout help it to blend in with the natural surroundings. “The primary spaces are arranged along an east-west axis, parallel with the building site’s contour lines,” explains architect Doug Minarik of Minarik Architecture.

“Creativity … is about trusting the left half of the brain to create a framework from which the right half of the brain can respond with solutions,” says Minarik, the founder of Portland, Oregon-based Minarik Architecture. “For example, the long rectangular footprint of the home allows for a connection to the landscape. But that footprint is bent slightly to distinguish entry, and to create separation between the master suite and more public living spaces.” 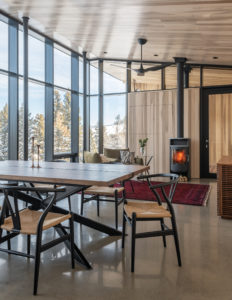 South-facing windows fill the home with light that’s gently filtered by the surrounding forest. “It can be formal, it can be informal, it can be dramatic, it can be cozy, and I think a lot of that comes from the fact that [the home’s design] is simple,” says builder Dennis Steinhauer, owner of Archer Construction. “It’s a canvas.”

This slightly broken rectangle is as compelling to look at as it is to look out of. “You really can’t stand anywhere in the home and not have a great place to look,” builder Dennis Steinhauer, the owner of Archer Construction, says. “It’s got the best views of any home we’ve ever worked on, and they’re certainly featured.” 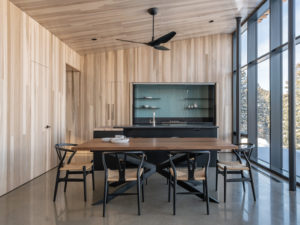 Doors and cabinets throughout the home, like this one hiding the TV, blend seamlessly into the walls and disappear when closed.

Steinhauer and his crew may have been fated to build this particular home. “Oddly enough, I worked with the previous owner of this property in Bridger Canyon,” he says. “They were planning a different project on the land, but things in their life changed.” Those owners put the property up for sale. After time passed, Steinhauer explains, “I heard from a local realtor who had somebody looking at a property out in the Bridgers and wanted an opinion on what they could do up there. And by coincidence, it was the same piece of property I’d already spent quite a bit of time investigating. I guess it was meant to be.” 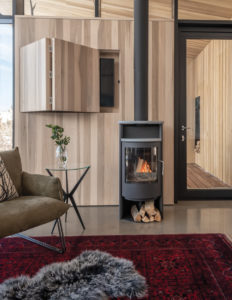 Steinhauer connected the property’s new owners with Minarik, who worked with them to design a space where the stunning natural surroundings wouldn’t be taken for granted. “One of the main project goals was to find a way to constantly refresh the experience with the landscape as one moves throughout the house,” Minarik says. “The last thing we wanted was for the amazing views to start to feel routine.”

He accomplished this in part through “the scale and placement of windows within each space, to frame a unique view experience based on the use of the space,” he says. “The open and more public kitchen and living area has a large wall of glass, whereas the privacy of the master bath isolates a sliver of the Bridger Mountains through a 3-by-12-inch window.” 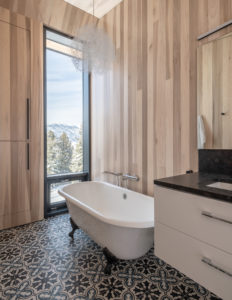 Customfabricated cabinetry hardware and encaustic tiles embellish this serene bathroom, and a tall, narrow window provides a dreamy view of the Bridger Mountains from the bathtub.

“The windows,” Steinhauer adds, “are German. They’re a tilt-turn, triple-pane product. Because there’s so much glass [in the house], and the glass is north facing, that was an important decision. It’s very comfortable; you can sit within a foot or two of the glass without feeling the outdoors.” This, in effect, creates a cozy way to connect with the mountains on cold days. 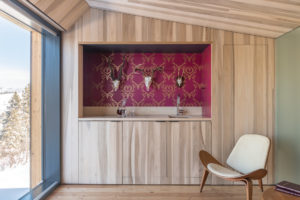 An 8-by-10-foot loft space that’s tucked under the roof was almost eliminated for budgetary reasons. “It remained,” says Minarik, “and is one of my favorite spaces in the house.” The nook has just enough room for “two comfortable chairs, a fly-tying desk, a bar, and a massive sliding glass door for taking in the view. The back wall is translucent glass, allowing borrowed light into the spaces below,” he adds.

To further emphasize the beauty outside, the home’s interior is serene and uncluttered. “The clients had a goal from early in the design process to have all the kitchen cabinetry disappear,” Minarik says. “We used this as a design guideline throughout the home, beyond just the kitchen space.” Doors opening to the powder room, laundry area, bar, television room, and office are elegantly integrated into the walls with hidden hardware. “The spatial clarity that results is amazing,” he adds, “keeping the focus on the view and quality of light. And if you look closely at the big windows, there’s a narrow slit at the top that hides automated shades.” 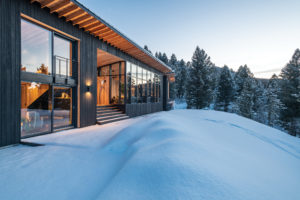 Situated near a steep slope, the house was sited to allow much of the existing landscape to remain pristine. “We had a very minimal area of impact around the house,” says Steinhauer. “We really didn’t do any logging or thinning, and very little grading.”

The attention to detail employed by the carpentry team at Archer Construction is evident, as the wood grains of the bleached poplar paneling align perfectly with those of the hidden doors. “The carpenters on this project were just excellent,” says Steinhauer. “It never seemed to become routine for them.” One of them, he notes, worked full-time to craft and veneer the slab doors. 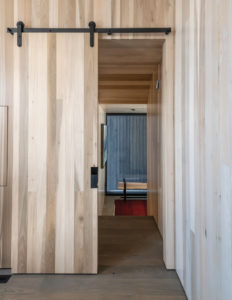 The carpentry crew developed a bleaching process that removed the natural greenish hue from the interior poplar paneling, leaving the wood a light, creamy color.

In contrast to its light interior, the home’s exterior is intriguingly inky, thanks to shou sugi ban cypress. The traditional Japanese practice of preserving wood by charring it isn’t ideal when applied to timber from local Montana forests, which naturally releases sap during the charring process. So Steinhauer chose the imported cypress for its superior durability. “We wanted to be sure that this would be a lasting project,” he says.

While it will shelter its inhabitants for decades into the future, the house also has roots in the past, becoming part of the long history of mountain home architecture in the West. It is, however, a unique addition — a refreshing break in a familiar pattern. Neither “a small log cabin” nor “a grandiose interpretation of national park lodges,” as Minarik puts it, the home celebrates the beauty of its setting while being both unostentatious and inviting. 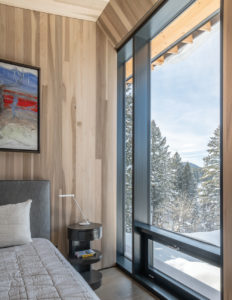 The homeowners took on the interior design, collaborating with Minarik Architecture. They chose comfortable, contemporary pieces with clean lines that allow the beauty of nature, visible from the home’s many windows, to take center stage.

“I avoid the term ‘Mountain Modern,’” says Steinhauer, “because it’s sort of broad. But I felt like this home is really comfortable modernism in the mountains.”