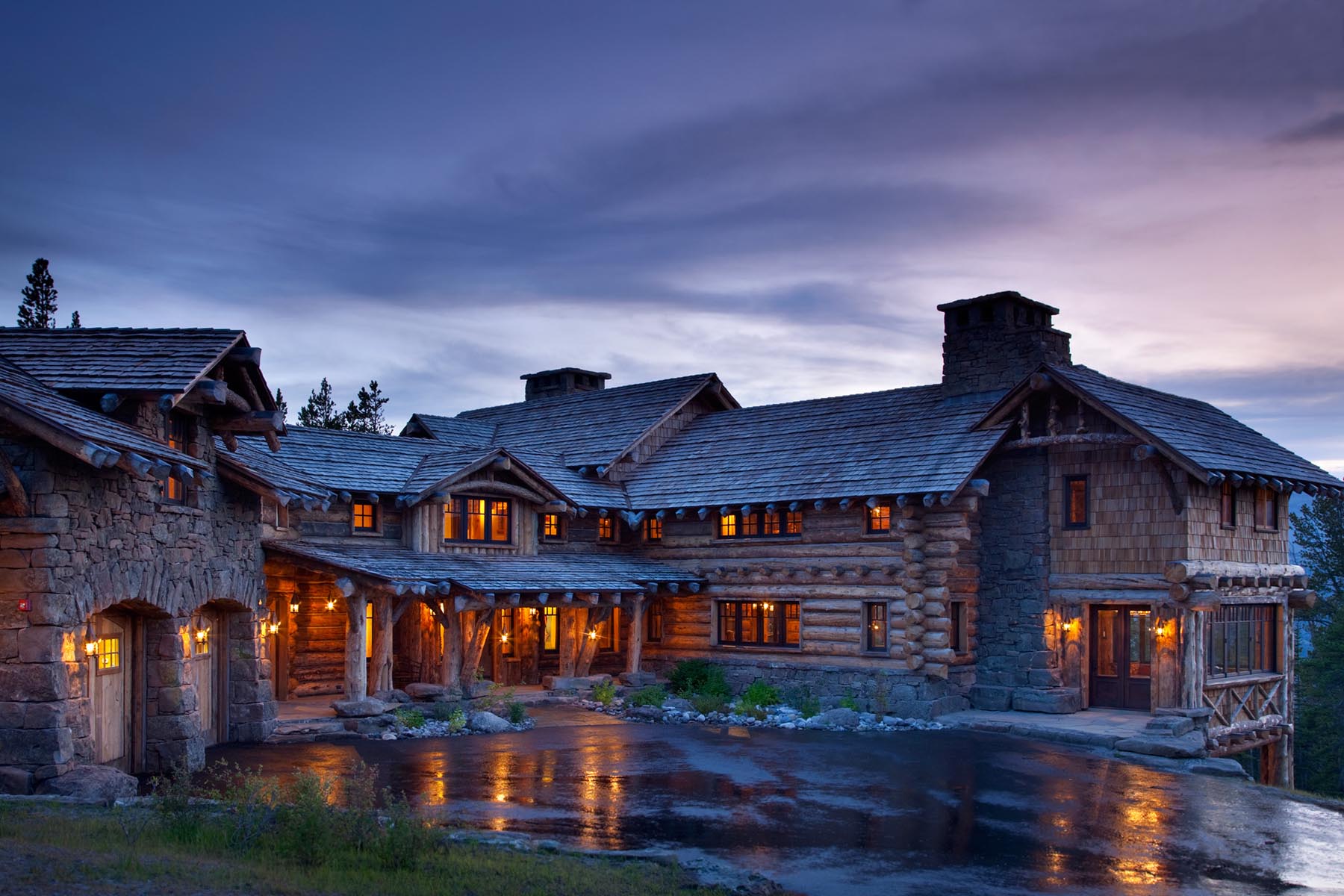 WHEN ARCHITECT LARRY PEARSON designs a house, he tells a story.

Noted as one of the leading figures in rustic architecture, he connects his designs to history, environment and the human element. One such house at Montana’s Yellowstone Club in Big Sky encapsulates the tale of past and present with resolute inspiration. Influenced by the owner’s love of Adirondack style and appreciation for natural materials, Pearson Design Group worked with Lohss Construction, based in Bozeman and Gallatin Gateway, Montana respectively, to construct a house that embodies old world craftsmanship as much as the clients’ modern taste. The Connecticut couple begged Pearson to design their home on Andesite Point and he forged ahead with reverence.

To add a little bit of context,” expounds Pearson, “we’ve crafted our own story line in Montana about Eastern seaboard and Adirondack craftsmen who moved west in the early 20th century. They brought European building skills to early America and as they traveled west the influences of those artisans moved across the country along with them. So building a home with these Adirondack influences is really an historic continuum that started out East.”

Urban refugees from the sadness following the September 11, 2001 terrorist attacks in New York, the couple had a dream of building a legacy home that would always be a respite for their family. They came west and explored options in Colorado, Utah and Wyoming. But ultimately it was Montana that captured them.

“We kept coming here and finally recognized that this was the last unspoiled place,” explains the husband.

Carrying those memories of visiting the Adirondack Great Camps in upstate New York, the couple’s idea of a cozy cabin in the woods was the predominant vision for their Montana retreat. Additionally, the Yellowstone Club’s blend of rugged luxury in a private wilderness setting, similar to the Great Camp philosophy of the Rockefeller, Carnegie and Vanderbilt families, was part of the allure. In this venue, the couple envisioned a getaway home that would become a family tradition for generations.

“Timeless was the theme,” says the wife.

“The goal since the projects’ inception was the desire to have the home feel as if it had been in the family for many generations and the new owners had inherited an established, layered, somewhat storybook home,” notes Young.

As an independent firm, Carole Young Design is selective about her clients, but working with her daughter and son-in-law was a labor of love. She consulted closely with Pearson and Lohss in matters of scale, style and customized features within the house, particularly in regard to lighting. Each room contains a signature piece that uniquely defines the space. For instance, the 1960s ostrich egg chandelier in the dining room or the inlaid Moroccan game table abutting huge rough boulders of the fireplace with modern art by Roy Lichtenstein hanging above.

The end result is a blend of old and new, eccentric and simple to achieve a look that is refined with a spareness that doesn’t overpower either the exquisite presence of the natural setting or the organic elements of the architecture. Antiques and custom furnishings from around the world punctuate the house with a juxtaposition of rustic and modern.

The owners knew their mountain house would be a gathering place and so designed it with entertaining in mind. The kitchen opens to the dining room and flows to a great room that overlooks Lone Peak. Yet, the outside views are not the only eye-catching element in the house. As connoisseurs of fine art, the couple displays a museum-quality collection of Modern art that they love; the works range from Andy Warhol, Alexander Calder, Roy Lichtenstein to a framed Hermés scarf.

“One of the greatest elements of this house is the contrast of rustic alpine elements and contemporary interiors,” says project architect Greg Matthews. “Carole was fundamental with her focus of how the minimalist interiors work with the architecture and I actually feel that the contempory and the rustic work hand in hand in this project.”

Rustic finishes with outstanding craftsmanship accurately describes Lohss Construction’s philosophy. Add to that a level of on-site creativity inspired by the natural materials and assuredly the construction is elevated to art. Lohss and his team were responsible for many of the artistic details, such as the woven element of the juniper banister on the mezzanine in the great room, the organic curve of log and timber in the children’s bunkroom or the elegant touch of birch that lines the ceiling of the dining room.

“As a builder you need to have creativity to take a project to a unique level,” says Lohss. “We really like what we do and that shines through in our work.”

The owners were involved in every step of the process, from design to completion and they had a specific program for the house. The main priority was to create places for family and friends to be together, but the other focus was to craft the house so that it was light and airy. Despite the fact that log interiors typically ere on the dark side, Pearson and Lohss found a great solution. Siting is everything, Pearson admits, so the house is positioned to catch southern to western exposure most of the day and many large floor to ceiling windows allow daylight to filter in every room of the house. Inside, Lohss lightly sanded the standing dead logs to a light natural color, then sealed them with a clear coat; the antique chestnut flooring and twisted juniper branches in the banister add to the lightened effect.

Yet to understand the full affect of the house, it’s necessary to set aside the thoughtful architecture, remarkable art collection and outstanding views. Instead, there’s one image that makes this home a legacy: The family gathered casually in the kitchen, talking, preparing dinner for friends as the three boys hunker around the central island working a jigsaw puzzle and eating snacks.

“We are all so happy here,” says the wife, “This is just a happy house.” 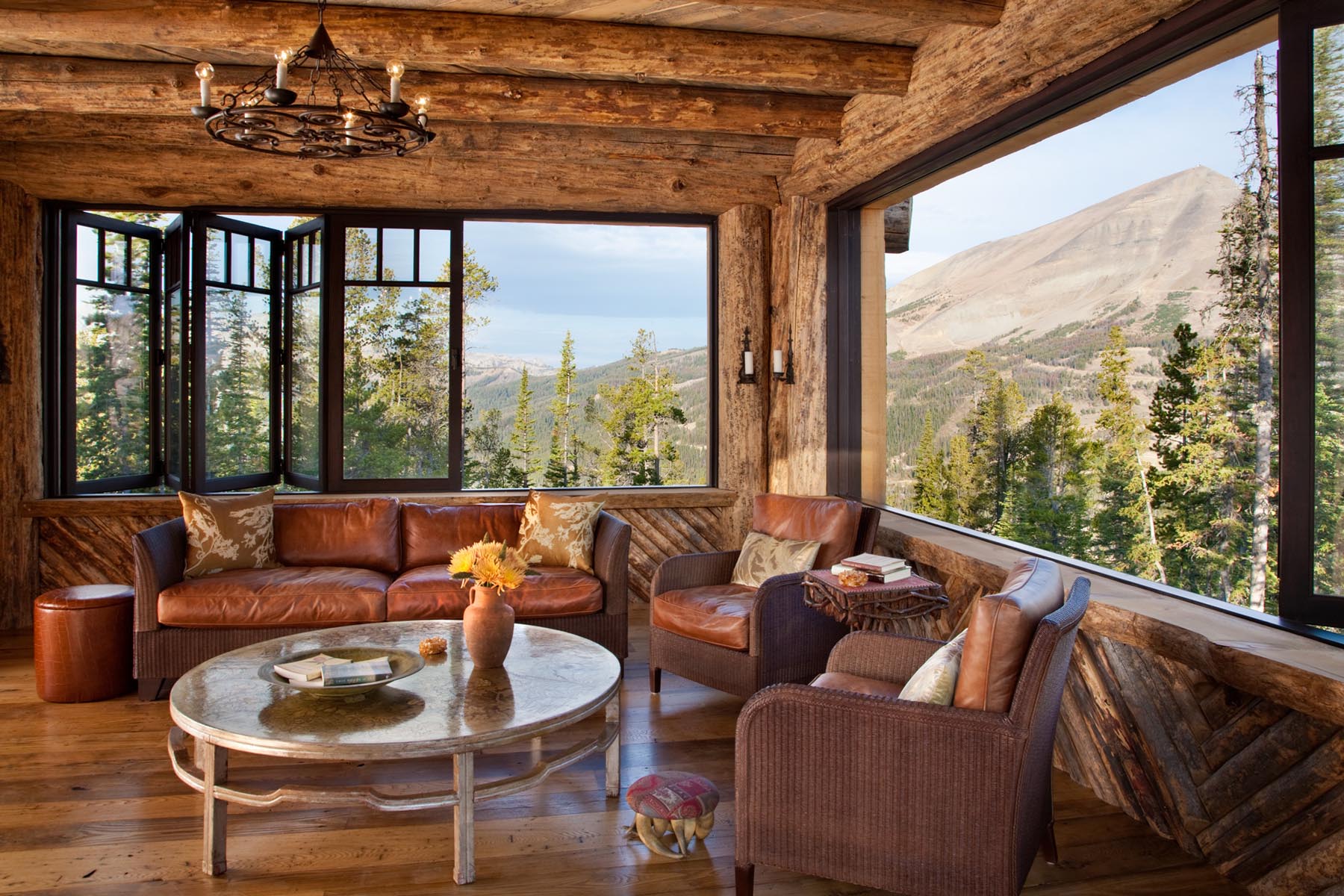 Putting a contemporary twist on the classic Adirondack screened-in porch, the Lone Peak porch features accordion windows that open to the majestic views of the surrounding mountains. 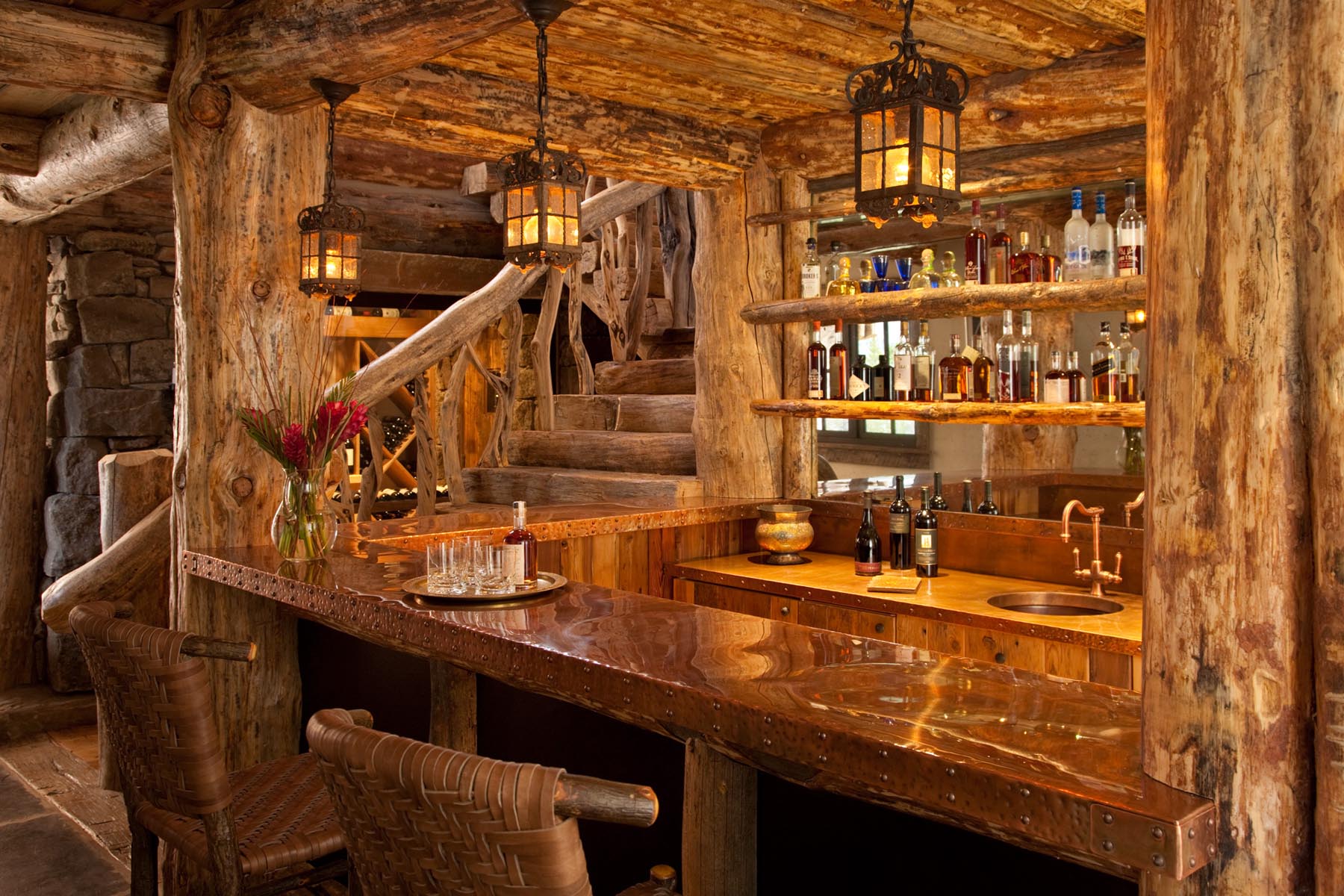 The ground floor of the home wraps visitors in warmth, with a copper-topped bar in the saloon, which features a layered view of the juniper banister and the wine room in the background. 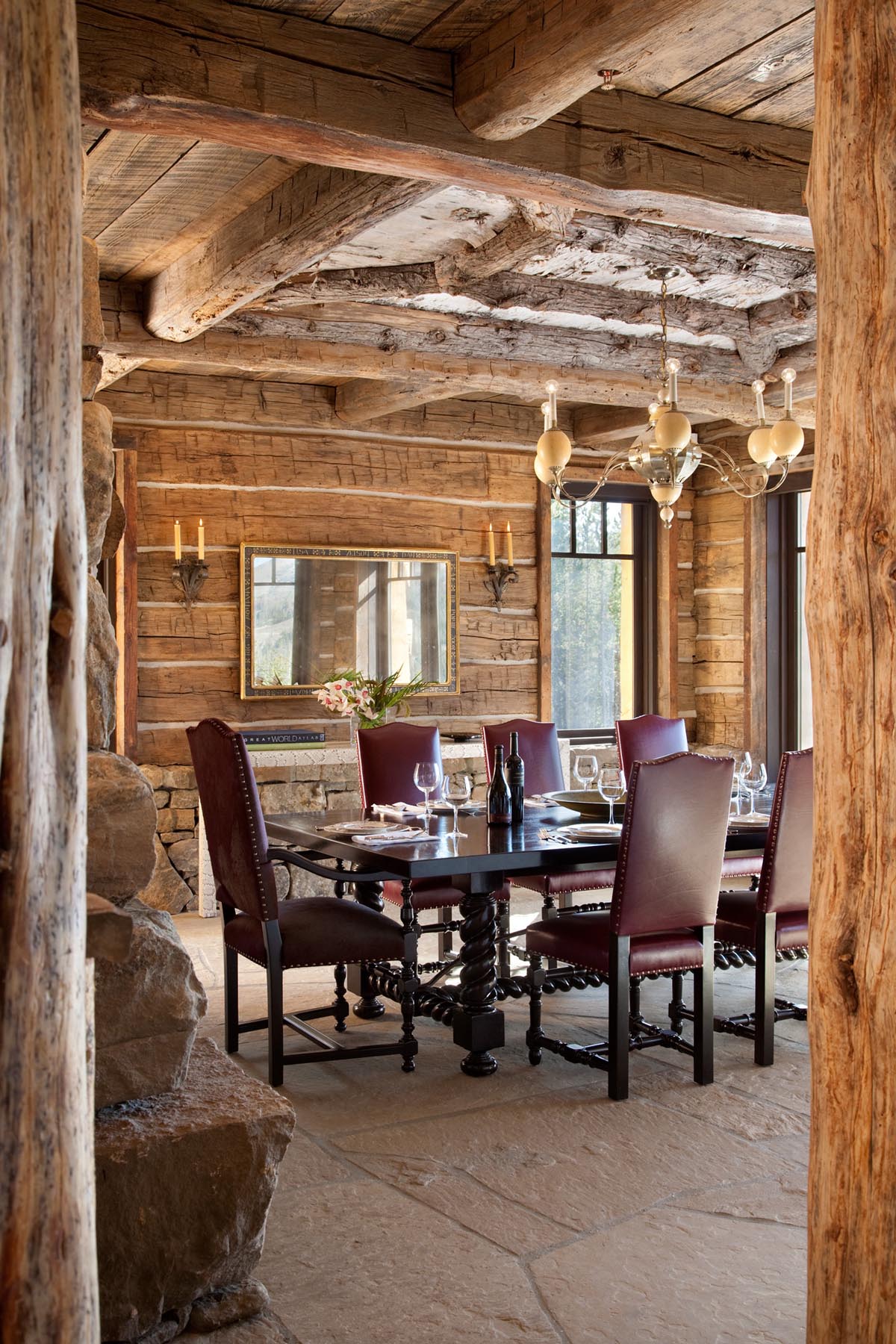 Interior designer Carole Young blended antiques, such as the 1960s ostrich egg chandelier in the dining room, with architecture inspired by Adirondack elements throughout the house. 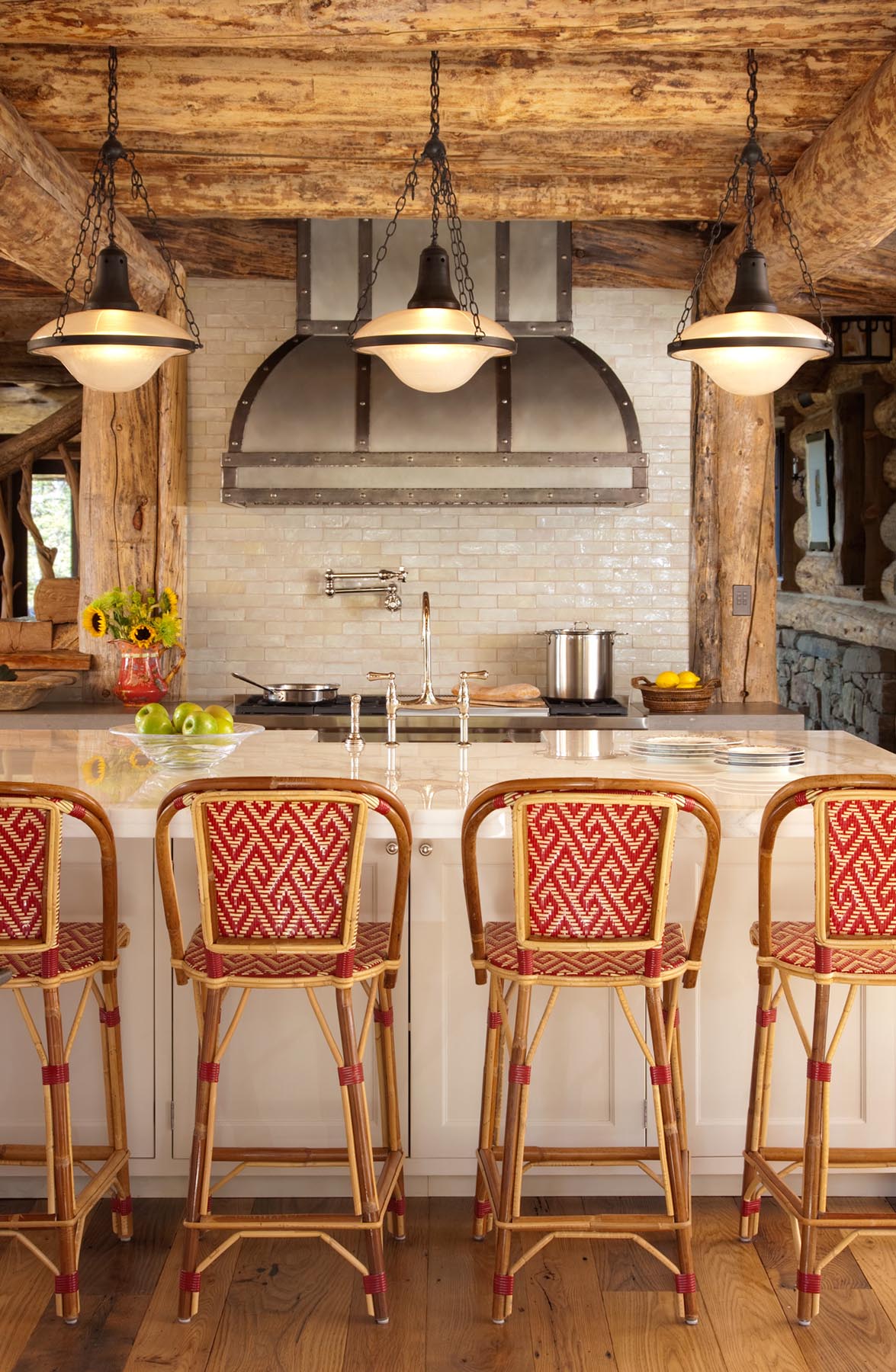 In the kitchen, Carrera marble countertops and classic white subway tiles wake up the rustic interiors with a pop of contemporary style. 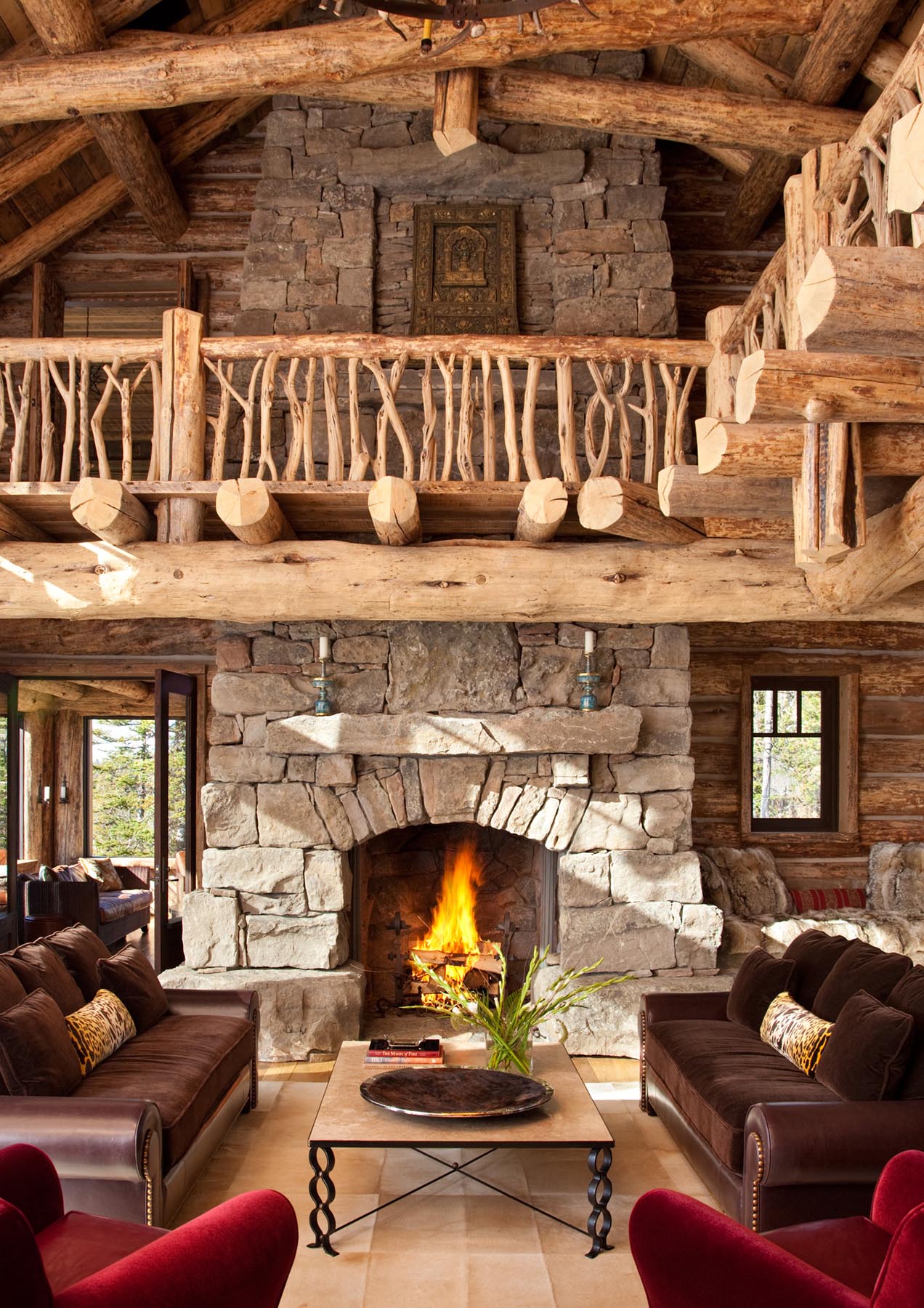 Using lighter-colored logs from trees that were “standing dead” was a request by the owner to keep the interiors lighter than a traditional cabin. The hand-picked juniper banister on the mezzanine showcases the talents of the builder, Lohss Construction.