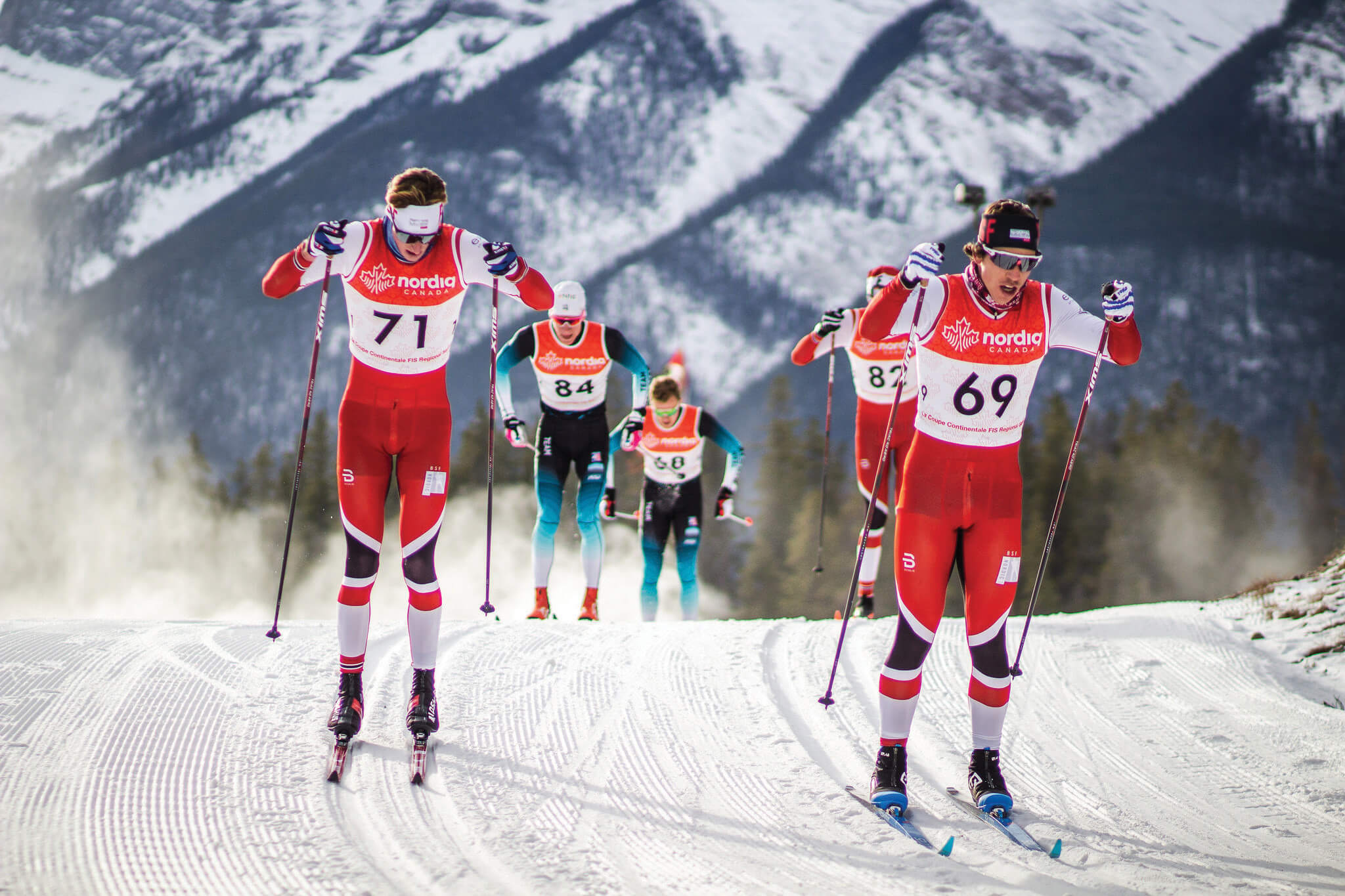 Growing up in Bozeman, Montana, cross-country skier Logan Diekmann learned to slide on snow at an early age. By the time he turned 8, he was racing with the Bridger Ski Foundation’s (BSF) Youth Ski League, having started with the program at the ripe age of 4; by 15, he was a junior national champion. He attended and raced for the University of Utah, and it was during his senior year two years ago that he got a call inviting him back home to Bozeman.

On the other end of the line was former U.S. Ski Team member Andy Newell, who had recently moved to Bozeman to resuscitate and coach BSF’s highest level Nordic development team. Formerly the Elite Team, the new foray was renamed the Pro Team, and Newell wanted Diekmann to be one of his first recruits. Both had lofty goals, creating the perfect partnership to help get the new team started and sprinting into the future. “It was a no-brainer to come back and race for BSF,” says Diekmann. “I like racing for the club that developed me and being close to home again. It was somewhat of a natural progression to my racing career.” 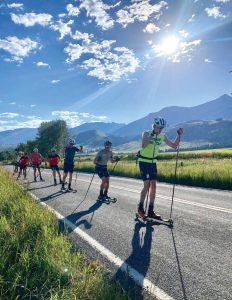 In addition to Diekmann, Newell hand-picked a team of eight athletes — four men and four women — from around the country: places like Vermont, Minnesota, Michigan, and Colorado. His goal was to create the best pro team in the country and develop a pipeline beginning with the youngest skiers of the World Cup that takes them all the way up to the ultimate dream: racing for the U.S. at the Winter Olympic Games. “Our goal is to take athletes who are out of college and put them on the U.S. Ski Team,” says Newell. “We want to give these young athletes their shot at the biggest competitions.”

So far, the team has achieved incredible results. Colorado native Finn O’Connell was recently selected for the 2022–23 U.S. Ski Team after finishing last season ranked as the second-best distance skier in the country, and Diekmann is representing the U.S. on the World Cup circuit this winter after being crowned the Sprint Grand Champion of the 2022 Super Tour — the nation’s top cross-country race series. Hannah Rudd took a podium at a Super Tour event last winter, which ended with four BSF Nordic athletes ranked in the country’s top six skiers. “I’m proud of the way this team has come together,” Newell says. 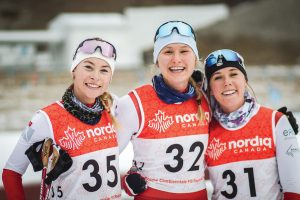 Newell may be the perfect person to usher in this new era. At 39, he still has a youthful energy that resonates with athletes, and his passion and devotion radiate as he talks about the sport. A Vermont native, he spent nearly two decades on the U.S. cross-country national team and qualified for four Olympic Games between 2006 and 2018. His best individual finish came in 2006, in Turin, Italy, when he finished 16th in the individual sprint. He’s been the U.S. National Sprint Champion, and his third-place finish at a 2006 World Cup race in China was the first podium by an American Nordic skier in more than 20 years.

Newell retired after the 2019–20 season and began contemplating his next adventure. His wife, former championship cross-country ski racer and current North Face trail-running athlete Erika Flowers, had recently relocated to her hometown of Bozeman. It was natural that Newell would head that way too, and once he started talking with the local ski foundation, his path became clear. “In my view, Bozeman is the perfect place,” Newell says about the location’s potential for developing the country’s best cross-country skiers. “It’s a town that celebrates ski culture, it’s an appealing place to live for these young athletes, and BSF already has a ton of community support.”

Newell also mentions how the area’s climate lends itself to getting on snow early in the season, and the growing network of groomed trails — many with snowmaking capabilities — maximizes winter training time. The team also takes advantage of the world-class tracks at Crosscut Mountain Sports Center in the Bridger Mountains. When it’s not winter, the plethora of mountain trails to run on and endless paved roads for roller skiing makes Bozeman a four-season haven for mountain culture, and the Pro Team fits right in. 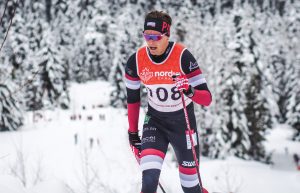 Bridger Ski Foundation Pro Team athlete Logan Diekmann (pictured) will be racing on the World Cup circuit this winter with a shot at attending the World Championships in Slovenia. Photo by Ana Sellers

Originally chartered as the nonprofit Bridger Ski Education Foundation in 1975, BSF has been an integral part of the state’s skiing history. With roots dating back to the original Bridger Ski Club that was associated with Bridger Bowl Ski Area, the organization provided an avenue for local youth to compete in sanctioned races around the state. Today, BSF has grown to serve more than 1,200 Bozeman-area youth through alpine, cross-country, freestyle, and freeride programs. The organization has produced three Olympic athletes over the years: Jeff Olson (alpine), Leif Zimmermann (Nordic), and Heather McPhie (freestyle).

“BSF continues to be strongly supported by the Bozeman community,” says Executive Director Evan Weiss, pointing out that participation has doubled in the past four years. “It’s encouraging to meet so many people who have fond memories of being a BSF athlete or coach, and I believe this directly translates into our successful fundraising campaigns that allow us to keep costs low, while simultaneously increasing program performance and participant satisfaction.” Indeed, talk to anyone involved in the foundation and community is an ever-present theme. “One of the reasons I took this job is because of the great community support,” says Newell. “This support allows you to hold up a pro team.” 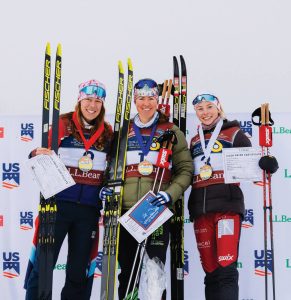 Newell also points to the trickle-down effect of having a pro team embedded in the foundation. The team’s athletes act as mentors to younger skiers — they help them train, go to races for support, and provide an example to which the younger athletes aspire. “That’s something I’m really passionate about,” he says.

Being on the Pro Team is a year-round endeavor. Athletes put in between 800 and 900 hours of training each year, including gym workouts, roller skiing, and excursions to other parts of the world during the off-season. This past off-season, BSF athletes traveled to places like Norway (where you can ski in a frozen, 1.2-kilometer ski tunnel), Sweden, Utah, and Michigan. Several of the team members also ran in area races: Mariah Bredal won the women’s division of the Bozeman Marathon and four athletes took part in the rugged John Colter Run. During the on- and off-season, the skiers spend nearly every day together, often travel together, and support each other whenever they can. “The side of the sport that people don’t really see is the team element, which is why pro teams like this are so crucial,” Newell says. “They are genuinely supportive of one another and are great teammates. That’s been the most rewarding thing for me as their coach — to see that type of team culture come to fruition.” 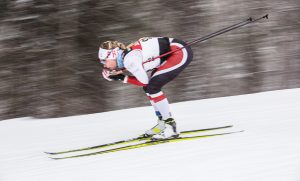 Mariah Bredal tucks down a race course in a competition last winter. Top racers can reach speeds of up to 40 miles per hour on the downhills. Photo by Ana Sellers

The current team has five men and three women, who typically start competing in November. Most of the athletes participate in the Super Tour series, the highest level of competition in the country. Top skiers race head-to-head 19 times throughout the winter, in a variety of cross-country disciplines, at venues in the U.S. and Canada, including the U.S. Cross Country Ski National Championships in January. The best racers get coveted World Cup starting spots, and a direct path to a potential Olympic team selection. “My goal for 2026 is to have at least one BSF athlete at the Olympics,” Newell says emphatically. “That’s the focus.”

Diekmann’s own focus this season starts with a late-November World Cup race in Finland and will hopefully include a February stop at the World Championships in Slovenia. He seems ready for the challenge. “I’m excited to head to Europe again to see new race venues, but most importantly to put all of my training to the test,” Diekmann says. “I’m excited to see what I can do and try to make a name for myself as one of the best U.S. sprinters of all time.”

He credits BSF’s programs for his professional development, as well as his personal growth. “Since day one, BSF has helped me and other skiers find their way to personal peak performance,” Diekmann says. “But it also teaches kids a multitude of lessons, including time management, determination, willpower, and resiliency. It’s a stepping stone.”

Athletes like Diekmann and the rest of his teammates give Newell much hope for the sport’s future. Likewise, the BSF Pro Team will play an important role in fostering the next generation of podium-seeking cross-country skiers. “Nordic skiing is very much thriving these days,” Newell says. “It’s exciting to be a part of that.”