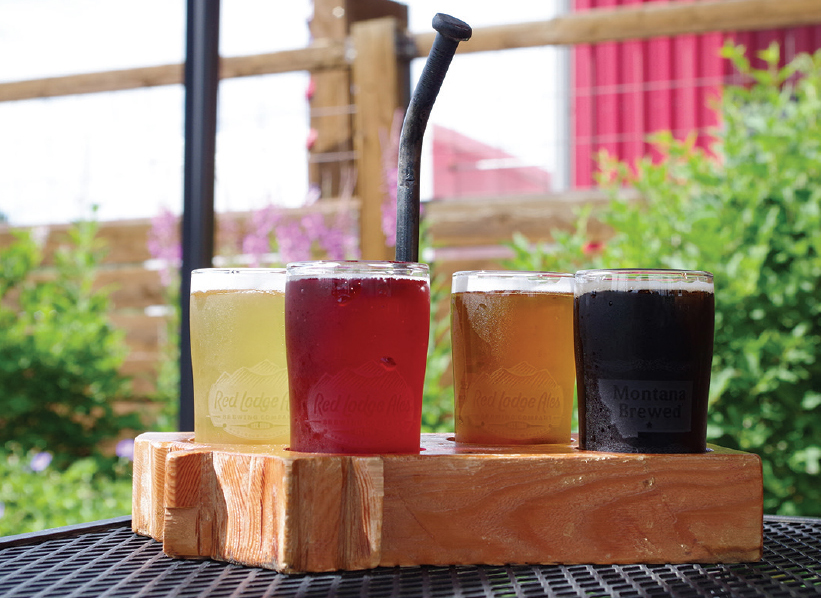 IN CLASSIC FASHION FOR a college student in upstate New York, Sam Hoffmann first started brewing beer in his dorm room. But it was a childhood spent traveling around the rural byways of Europe that sparked his interest in beer, cider, local foods, vineyards, and orchards. Raised with his two sisters outside of Boston, he frequently accompanied his parents and family to his father’s native Germany on extended summer trips. Some years, they were sent to Europe without their parents for even longer visits; for the kids it was a full-immersion experience in the language and traditional culture of the German and Austrian countryside. 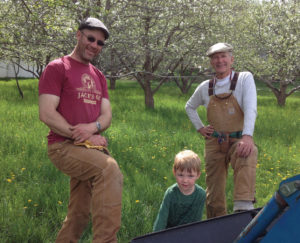 Sam Hoffmann stands with his son and a local apple farmer. He launched Red Lodge Ales in 1998 to instant acclaim and rapid growth. abOve: More recently, Hoffmann expanded into ciders, and in 2016 he opened the Last Chance Pub and Cider Mill in Billings, Montana. Hoffmann grows some of his own apples, sources some locally, and also buys from small-scale growers in Montana, Oregon, and Michigan.

Perhaps because of that early influence, Hoffmann always preferred the country to city life. After college (during which, in addition to pursuing home brewing, he worked on a trail crew in the White Mountains of New Hampshire), he headed west to Montana. But after pursuing seasonal ski resort and ranch jobs, Hoffmann soon realized he might be wise to consider a more sustainable career. Acting on what was by then a long-term interest, he launched Red Lodge Ales in 1998 and started production in a 500-square-foot brewery adjacent to a small restaurant and taproom in the mountain town of Red Lodge. 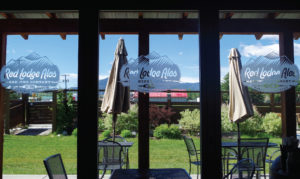 Sam’s Tap Room and Kitchen serves casual fare and Red Lodge Ales in a garden setting in the mountain town of Red Lodge.

To say his brews were met with success would be an understatement. Within two years, his company had outgrown the space and relocated to a 5,000-square-foot steel building next to a grain elevator with a taproom and beer garden for on-site sampling. “The first taproom was a 20- by 30-foot room with one window in an old steel building,” he recalls, “but people caught on quickly. They were asking for [Red Lodge Ales] in restaurants, and that fueled the growth of the brewery.”

Growth was so fast, in fact, that in 2008 they moved to their present location, a purpose-built brewery backed by open hills. Its convivial restaurant, Sam’s Tap Room & Kitchen, serves casual fare and is trimmed in Douglas fir obtained from a local rancher whose barn was falling down. It opens onto a garden that’s planted with rose bushes, apple trees, native grasses, and hops, making for a lively scene during the busy summer tourist season. And an event center with a stage offers opportunities for larger celebrations.

Today, Hoffmann and his team produce an array of offerings, including seasonal brews such as Mystery Machine, an IPA that changes every year; and Bruno’s, named after a local captive grizzly to whom they gifted an empty keg as an indestructible play toy. The ales have garnered many accolades. Glacier Amber Ale, for instance, modeled after the German altbier, won a gold medal in the 2017 Great American Beer Festival. Czechmate, a Czech-inspired Pilsner, took home gold in the 2013 North American Beer Awards. Red Lodge ales are produced through time-honored techniques using Montana-grown malted barley and soft glacial water heated by a solar thermal array. 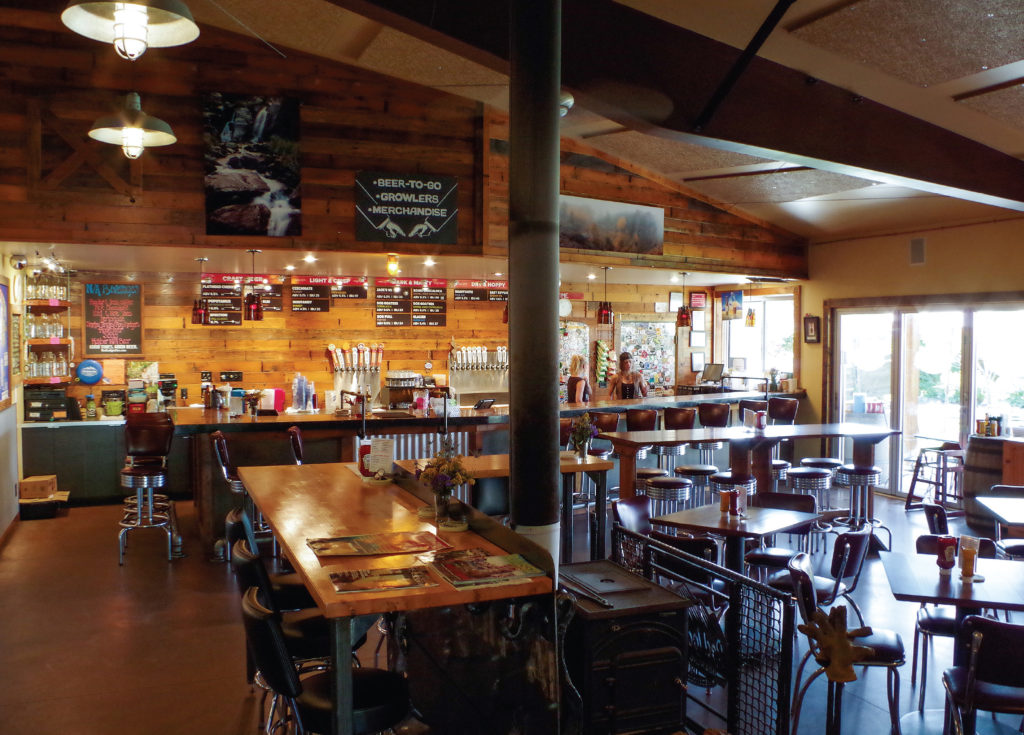 The Red Lodge restaurant has a laid-back aesthetic defined by Douglas fir that was salvaged from a local barn.

OVER THE YEARS, Hoffmann has become increasingly interested in cider production. About 15 years ago, he and his then girlfriend (now wife), Lindsey, came across an apple grower from Fromberg selling his produce at the Billings farmers’ market. When asked if he’d sell the apples for cider-making, the farmer declined. A few years later, however, he showed up hauling a load of ripe fruit. In the meantime, the Hoffmanns had planted their own orchard and spent a decade learning about apples and cider-making before buying a cider press in 2014. By then, real estate had become increasingly tight in Red Lodge, whereas nearby Billings, which serves as a hub of activity for the entire region, had an ever growing population and room to spread out. In 2016, they opened the Last Chance Pub and Cider Mill in downtown Billings. 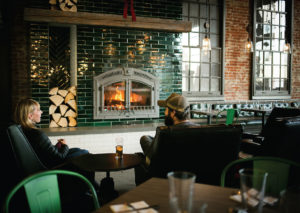 The urban and contemporary Last Chance Pub, housed in a former tractor showroom in Billings, Montana, is anchored by a fireplace accented with green glazed tile. 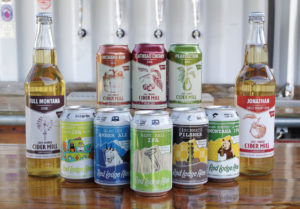 Hoffman’s company produces 25,000 gallons of cider a year and a constantly changing menu of brews.

Today, in addition to the ales produced 60 miles away in Red Lodge, Hoffmann presses about 25,000 gallons of cider, a process that occurs within full view of the restaurant’s patrons. In addition to the original Fromberg farmer, small-scale growers provide apples from Montana, Oregon, and Michigan, and Hoffman mostly uses McIntosh, Spartan, Cortland, and Jonathan varieties. He also likes Newtown Pippins, which have a low level of tannins and, as he points out, boast an august heritage, having been grown by both George Washington and Thomas Jefferson.

“There’s a lot of press about French and English varieties,” he says, “ but they’re hard to come by and don’t grow well in the U.S. Their signature is tannins; they’re more wine-forward than fruit-forward. At the end of the day, our customers are happy with a well-made, fruit-forward cider.”

The Billings restaurant — designed by Hoffmann’s sister, interior designer Susie Hoffmann of the Bozeman-based Envi Interior Design Studio — is housed in a former tractor dealership with exposed brick that lends it an industrial-chic vibe. The rustic yet modern space balances openness with warmth and boasts, as its main focal point, a floor-to-ceiling, glazed-brick fireplace. Like the beers and ciders, the food is artisanal and focused on locally sourced ingredients.

HOFFMANN HAS a hectic schedule, keeping up with his wife, who works part time at the brewery, his two sons, and two businesses located 60 miles apart. There’s often something happening at the Red Lodge event space, from concerts to weddings to speakers. Hoffmann enjoys hatching creative ideas with his talented team, such as farm-to-table dinners, orchard yoga, live music, the annual Monster Dog Pull, and a 5K orchard run.

Since that summer long ago, when Hoffmann and his little sister were sent to Austria to meet their grandparents — where they were allowed to have a small beer at night with dinner — the passion for brewing has never faded. “It has been a part of my life for a long time,” he reflects, “and it’s been a fun industry to be in.”

Hoffmann’s work keeps him in close contact with the cycles of life. He demonstrates an understanding of that in his own child rearing, bringing his 7-year-old son to work once a week in the summer. “He fills out a timecard, we do brewery safety, we clean some kegs,” he says. “Then we play soccer in the field next to the brewery.”