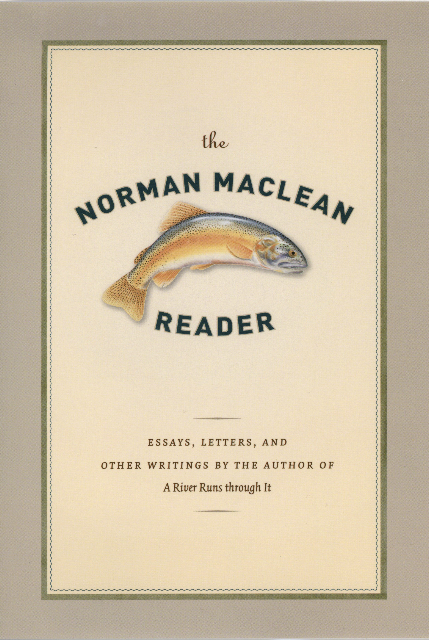 If you are looking for a volume that reduces the enigmatic qualities of Norman Maclean’s A River Runs through It to simplistic explanations, turn the page. O. Alan Weltzien, professor of english at the University of Montana Western, has too much respect for Maclean’s work, and for what it means to be human, to forcibly make the complex simple. However, what you can find in Weltzien’s edited volume of Maclean’s work, The Norman Maclean Reader: Essays, Letters, and Other Writings by the Author of A River Runs through It (The University of Chicago Press, $27.50), is a deeper appreciation for what defined both Maclean and perhaps each one of us.

Weltzein goes to commendable lengths to present the possibility that Maclean was haunted by more than just waters. Although Maclean’s prominence was established by A River Runs through It, such a position is also merited by Maclean’s other writings. Weltzien’s edited volume includes “Black Ghost” and excerpts from Young Men and Fire, writings which led Weltzien to contend that “Maclean was equally haunted by fire.” Around these works is an array of other writings, both published and unpublished, as well as an interview conducted by Nicholas O’Connell and letters to some of Maclean’s closest colleagues.

The cumulative impact of these efforts is the possibility that Maclean was ultimately haunted by the memories of tragic heroes more than even by waters or by fire. These qualities persist in stories about his brother, as well as smokejumpers, all of whom met their fate at a young age. To this end, Weltzien opens his edited volume with selections from a manuscript Maclean never completed concerning General George Armstrong Custer and the fate he met at the Battle of the Little Bighorn. Maclean referred to this battle as one with “the power of an endless argument, one of the world’s battles destined to be fought forever.” At the center of this debate is Custer — one who Maclean viewed as being sentenced to death not by the tribal peoples gathered on banks of the Little Bighorn River in June 1876, but by political forces as far away as Washington, D.C. In the end, Maclean captures the possibility that “If the Battle has a secret to reveal, it is of the power that defeat has over us and we perhaps have over it.”

Beyond even what haunted Maclean, Weltzien’s exceptional volume introduces us to what Maclean loved. In these pages, we learn more about a man who loved his native Montana, who loved the power of well-crafted words, and who ultimately loved people not readily understood. If we are patient with the complexities of Maclean’s work, we too will understand that we are defined by not only what haunts us but also by what we love. However, neither is simple. In this respect, both Maclean and Weltzien offer us a gift to be treasured.

Finding Beauty in a Broken World

Writer, naturalist and westerner Terry Tempest Williams was in Washington, D.C. on September 11, 2001. Across the street from the White House, when word came that it was likely the next target, Williams and her colleagues were told to run. She was so profoundly affected by the day, and the events that unraveled in the months following, that she all but stopped writing. Nearly a year to the day after the attacks, Williams stood on a beach in Maine and reached for the divine. “Give me one wild word to follow,” she implored. What she heard was “mosaic,” a word that would launch her on a global journey and guide her through her latest work, Finding Beauty in a Broken World (Pantheon Books, $26).

Understanding that mosaic can mean “taking something broken and making it whole,” Williams traveled to Ravenna, Italy, where she spent weeks breaking stone with a hammer to create mosaics in the style of the classic beauties that illuminate different corners of the city. The process was not a craft, as she had originally imagined, but an art and a form of integration through which Williams found great beauty in brokenness.

From Italy, she ranges closer to her Utah home, studying the threatened prairie dogs in Bryce Canyon. She journals their every movement, moment by slow moment, and finds kinship in that “we are both stuggling with how to survive in a world we hardly recognize.” Though we, as readers, can feel the drag of the hours spent watching these creatures, there is, as always, magic in Williams’ field notes. Her descriptions are visceral and her empathy contagious. She asks us to notice the small details — a flax blossom opening, a mother prairie dog nursing another’s pups — and assures us that the little things amount to everything.

If the prairie dogs in Utah reflect the wellness of the earth, the villagers in Rugerero, Rwanda, reflect the state of humanity. With a team led by Chinese American artist Lily Yeh, Williams goes to Rwanda to build a memorial for the victims, living and dead, of genocide there. “Social change depends on love,” she writes. And William’s love for humankind, animals, family, community and the land we all share is magnificently evident and interwoven throughout this eye-opening, gut-wrenching and utterly lovely book.

For some reason, fly fishing tends to lend itself more readily to artistic endeavors than spin fishing. Maybe it’s the beauty of a perfect cast, the way a fly two-steps on the water or the fact that fishing with a fly is more about angling than catching. Whatever the reason, many movies, poems, short stories and novels romanticize an already romantic sport.

Home Pool: Stories of Fly Fishing and Lesser Passions (Stackpole Books, $24.95), by Bruce Ducker, is another love letter to fly fishing. In 16 short stories — some funny, others quirky — Ducker tells tales of lovers of fly fishing. Each story is accompanied by a drawing by artist Duke Beardsley.

Fishing is both the main character and a member of the supporting cast. In the title story, “The Home Pool,” fly fishing reconnects a man to his son and reminds him of the bond they shared through fishing.

“Thinking like a fish isn’t enough, he had taught him. You have to be the river bed and those stones and that mayfly nymph, sweeping down the current. You have to see that trout pick you out, leave his feeding station, slowly sip you in. Then you strike.”

“The Specter at Grizzly Hackle” is an odd little piece about a woman who shuts down an exclusive fishing lodge each year to tempt fish with fancy hors d’oeuvres and let loose her inhibitions.

“And if one of those nights is cloudless, so that a pale disc of moon glims down on the rushing water, well past midnight there can be seen, were there eyes to see it, over the manicured lawns and past the fishing benches and across the swinging bridges that ford the riverdark foam, a racing female figure naked as a ghost.”

Whether protagonist or background character, fly fishing reveals inner psyche, bonds friends and relations and allows expression of true self. These aren’t the usual stories of tie, cast, catch and release; they are something more. Something more like art.

Researching a book of my own about the American conservation movement recently taught me two things: 1. State game departments have contributed tremendously to the restoration of American wildlife, and 2. They have generally done a miserable job of documenting their own history of accomplishment. Thanks to the timely publication of Montana’s Wildlife Legacy: Decimation to Restoration (Media Works Publishing, $29.95), the latter criticism will no longer apply to Montana.

As the last refuge for bison, elk, pronghorn and grizzlies at the end of the 19th century’s tragic decimation of American wildlife, Montana played a crucial role in these species’ eventual recovery. State game management (beginning with the Office of State Game Warden and evolving into today’s Department of Fish, Wildlife and Parks) also oversaw the successful introduction of non-native species such as ring-necked pheasants, Hungarian partridge and Merriam turkeys. Montana’s Wildlife Legacy provides a comprehensive record of these fascinating stories.

The book’s authors speak with authority. Harold Picton is an emeritus professor of wildlife management at Montana State University. After 28 years with Montana’s FWP Department, Terry Lonner retired as chief of wildlife research. In addition to their numerous academic credentials and media awards, both authors bring years of experience in the field to bear upon their subject.

The book begins with a concise summary of the area’s wildlife history, from pre-settlement abundance to near elimination. The bulk of the text documents in meticulous detail the state’s successful efforts at restoration through transplantation and habitat improvement. The abundant illustrations — including numerous, rarely seen vintage photographs — themselves justify the book’s purchase.

Although of obvious interest to sportsmen, the book deserves a far wider audience. Anyone who appreciates Montana wildlife today should know the story of its dramatic return from the brink, whether they head to the field carrying a firearm, bow, camera or binoculars. With the publication of Montana’s Wildlife Legacy, Montanans enjoy access to their wildlife history unsurpassed by residents of any other state.

Imagine setting an aging Michigan English major, recently divorced and sexually frustrated, loose on an American road trip, and then sit back and watch the emotional distress slosh around like ice cubes in a half-empty glass of whiskey.

In his typical fashion, Harrison intertwines painfully honest critiques of human relationships and faults with poetic assertions about life and love.

In the book, our central character and narrator, Cliff, recalls a scene where his wife is reading a book and looks up to say to him, “You look so forgettable, you’d make a good spy.” The statement gets Cliff thinking about life’s futility.

“Now in one year I had learned you couldn’t keep the world together. You can’t keep anything together, so why try?”

The events that set Cliff on his adventures are as follows: His wife cheated on him at their class reunion with an old classmate named Fred. Then she followed this up by divorcing him and selling his farm. In the midst of this he has an affair with a local cocktail waitress named Babe, and his dog named Lola dies.

The series of catastrophes leaves him unanchored. So he takes a jigsaw puzzle of the United States and sets out to drive across each of the 48 pieces. In the midst of the trip, he picks up an old student, who is now the neurotic and nymphomaniacal wife of a college professor in Morris, Minn. She travels with Cliff to Montana and the two have a descriptive, if less-than-romantic, tryst that confuses Cliff more than soothes him.

Travel is a way of self-discovery, and though Cliff seems to be more preoccupied with sex than may be healthy for a depressed 60-something man, his moments of self-realization are poignant and insightful.

“Now in the night with the empty tablet before me I felt like it was early spring calving time and I was sitting out in the shed with a Thermos checking and rechecking my mother cows for birth difficulties,” Harrison writes.

Through Cliff’s summer travels around the West, he spends too much time in California, dances on the Mexican border in New Mexico and fly fishes in Montana. He chases his lusty mind down the neck of a few whiskey bottles and around the smoky insides of a couple of dingy bars, but seems to come out the better for it.

He seems to learn again that life doesn’t end with personal catastrophes, and that eventually home is where you make it.

Harrison’s book isn’t a country song. At the end the dog is still dead and Cliff’s ex-wife is still a pain in the ass, but he does work up the energy to find a new beginning back in Michigan, the state where the whole adventure begins. 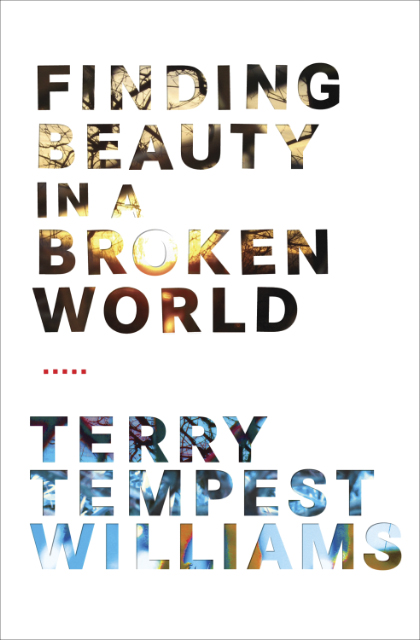 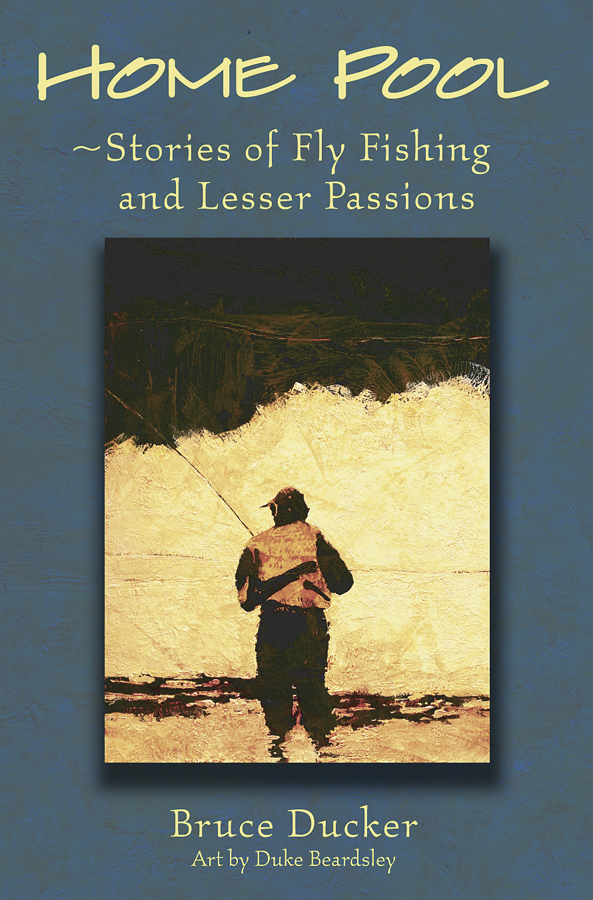 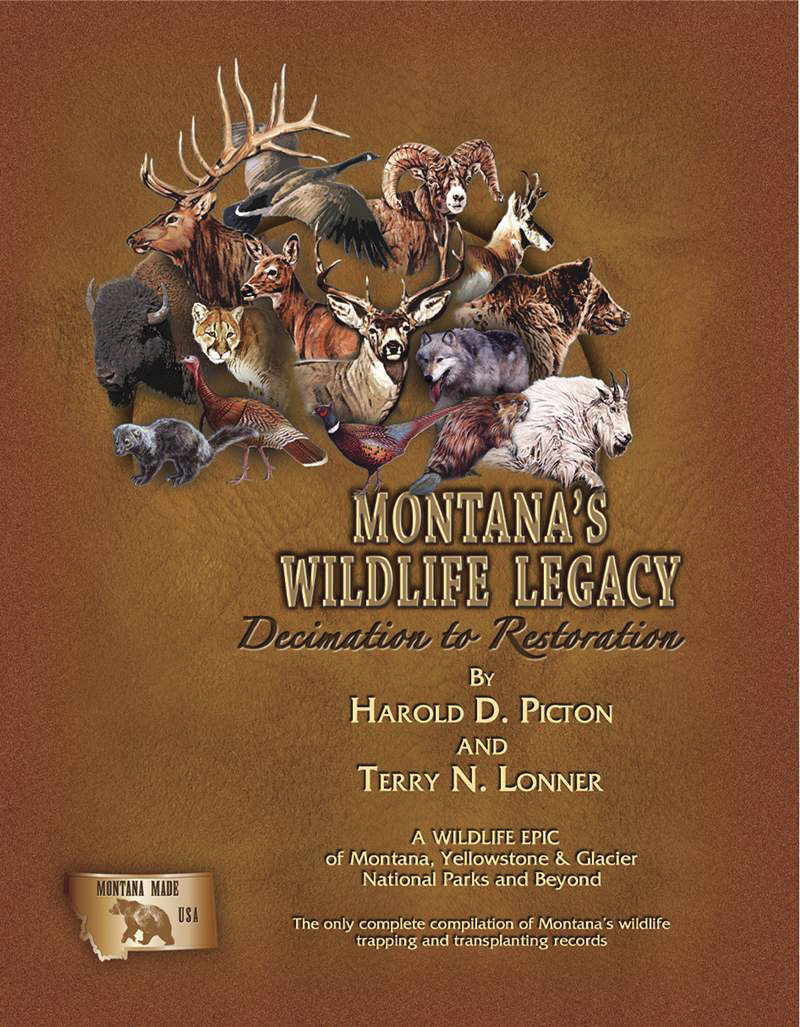 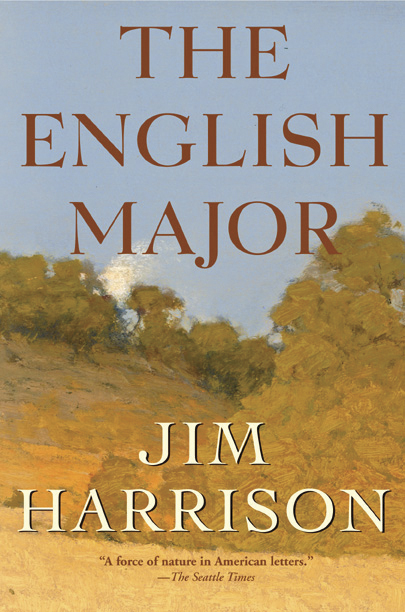