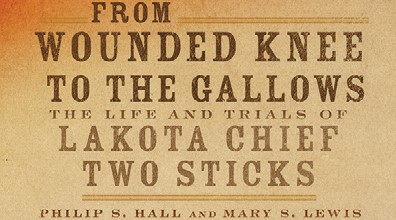 From Wounded Knee to the Gallows: The Life and Trials of Lakota Chief Two Sticks (University of Oklahoma Press, $24.95), co-authored by Philip S. Hall and Mary Solon Lewis, sheds new light on the aftermath of the Battle of Wounded Knee (also called the Wounded Knee Massacre), told from the perspective of Two Sticks, a Lakota chief who was known among his people as Can Nopa Uhah. Hall, a psychologist, and Lewis, a long-time resident of the Badlands area near Pine Ridge, South Dakota, draw from their in-depth research to create a compelling portrait of the political unrest that existed at the end of the 19th century, which involved the victimization of the Oglala, one of the seven subtribes of the Lakota, and resulted in the massacre of 300 Lakota by U.S. soldiers. 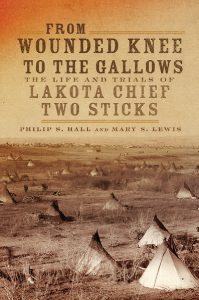 Among the soldiers tasked with managing the remaining Oglala on the Pine Ridge Reservation after the Battle of Wounded Knee, Chief Two Sticks had a reputation for being a rebel. However, this novel offers a different perspective on the situation, one in which exploitation and mismanagement on the reservation were part of a government strategy that was designed to subjugate the Oglala people.

Two years after the horrific events of December 29, 1890, Two Sticks — in an act of desperation — allegedly led a raid on a herd of cattle at the Humphrey Ranch about 30 miles west of Pine Ridge. As a result, the ranchers called in the 11th Infantry to arrest Two Sticks and his accomplices. When the soldiers arrived, the chief and his men escaped after a gunfight erupted, leaving five of the infantrymen dead and one wounded. Soon after, another gun battle ensued, leaving four of the Humphrey Ranch cowboys dead.

After being arrested and tried for the murders, Two Sticks was sentenced to death by hanging, a public event that was to take place on December 28, 1894 — the day before the fourth anniversary of the massacre at Wounded Knee — in Deadwood, South Dakota. Throughout it all, the chief proclaimed his innocence.

Beyond a recounting of the events that led to Wounded Knee and the rise of Two Sticks in its aftermath, From Wounded Knee to the Gallows pulls together an extraordinary collection of primary sources as it explores the nuances of the chief’s story. The result is a fascinating, timely, and important dissection of governmental and political forces as they pertain to Native peoples at the end of the 19th century, and perhaps as they still exist today.

Go West, Mr. President: Theodore Roosevelt’s Great Loop Tour of 1903 by Michael F. Blake (TwoDot, $26.95) follows the 26th U.S. president on his train journey across the American West in the year leading up to the election of 1904. Roosevelt referred to this trip as the “Great Loop Tour,” and he was careful not to associate it with campaign politics, meeting with Democrats and Republicans alike, shaking hands with mayors, mothers, and everyone in between, and speaking on topics he considered essential to good government. The trip through the West was also critical to shaping Roosevelt’s commitment to conservation. Inspired by his visits to Yellowstone, Yosemite, and the Grand Canyon, this journey was central to his ongoing perseverance in the preservation of America’s land, forests, rivers, and wildlife. Throughout the book, Blake deftly follows Roosevelt’s footsteps, revealing insights about the man, the political climate, and the history of the early 20th century.

Author Jefferson Glass tells the story of the American West through the lens of Wyoming’s dynastic Gothberg family in Empire: The Pioneer Legacy of an American Ranch Family (TwoDot, $26.95). After Martin Gothberg homesteaded 160 acres in 1885, he went on to expand his holdings to include tens of thousands of acres where he ran cattle amid a collage of characters who helped shape the West. Gothberg’s story parallels the history of open range cattle ranching, cowboys, roundups, pioneers, rustlers, sheepmen, and range wars. But it didn’t end there. As the Second Industrial Revolution, also known as the Technological Revolution, escalated in the late 1800s, so did the demand for petroleum products. What began as a need for beef to feed the hungry cities of the Eastern U.S. evolved into a need for wool for clothing, and graduated into a demand for oil to fuel this new mechanized age. Through the tale of this family saga, the history of the West comes to life in the hands of this storyteller and historian.

A quirky travelogue, Adventures Across America: On and Off the Trail of Lewis and Clark by Jennifer White Fischer (Gatekeeper Press, $19.95) offers an armchair adventure that’s packed full of the scenic wonders, tourist traps, and roadside monuments that stretch across the Western U.S., from Havre, Montana’s unusual “Beneath the Streets” historical tour to the Columbia River Gorge and beyond. Inspired by the travelogues of the Corps of Discovery and the works of travel writer William Least Heat-Moon, this charming volume focuses on discovery and exploration, sprinkled with entertaining and thoughtful observations and evocative black-and-white photographs that reflect the joy of uncovering hidden gems.

Next of Last Stand: A Longmire Mystery by Craig Johnson (Viking, $28) is the 16th installment in the author’s long-running series that features the adventures of Walt Longmire. This time, the laconic sheriff finds himself at the center of a new kind of mystery: an art heist involving one of the most famous paintings of the 19th century, Custer’s Last Fight, which was well-known for its use as an Anheuser-Busch promotional poster that was hung in saloons and taverns throughout the U.S. In telling the story, Johnson imagines a scenario in which the original painting — long thought to have been destroyed in a fire in Fort Bliss, Texas — is at the center of a million-dollar puzzle.