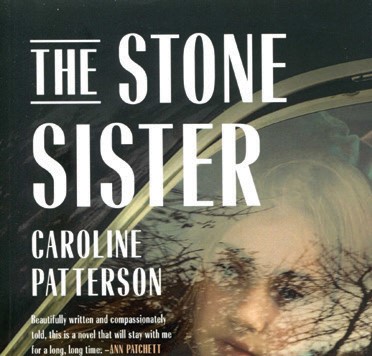 In The Stone Sister (Black Lawrence Press, $25.95), Caroline Patterson offers a kaleidoscopic story of loss and redemption centered around a deep family secret and a state institution’s dark past. In the 1950s, infants with Down syndrome were routinely institutionalized, and their parents were told it was best for all involved. Often underfunded and understaffed, these homes had very little understanding of their patients’ needs. Because parents were advised to forget their child and move on with their lives, the children they had later on were often unaware of their older sibling’s existence. This was the case in Patterson’s own life, and the impetus for her fictional counterpart Lizzie, the “Stone Sister’’ in the title. 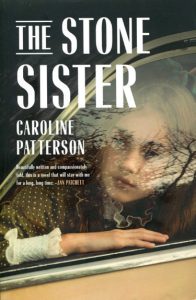 Lizzie was raised in what was then known as The Stone Home for Feeble-Minded and Backward Children. Later name changes reflect evolving medical advancements and understanding, though very little improvement in the treatment of the institution’s residents. Lizzie becomes the gravitational center for three stories spread across two generations.

Lizzie’s parents, Bob and Mary, struggle to carve out a “normal” life with their new, healthy daughters while also navigating the shame of what has happened to their firstborn. In the next generation, their daughter Elizabeth contends with her own struggle to find happiness in family life — a happiness that’s potentially upended by the discovery of her hidden sister. Bridging the generations is Louise, a nurse at The Stone Home who becomes the mother to Lizzie that Mary wasn’t able, or allowed, to be.

These braided storylines flow from one to another, jumping time periods and points of view in nearly every chapter. In a lesser writer’s hands this would be chaos, but in Patterson’s dexterous care, the transitions are natural and clear, and the weaving of the action heightens the impact, each narrative building upon and strengthening the others.

At first read, one may be left wondering if Lizzie’s story is what’s missing. We get very little, if any, of her interior life. But this is perhaps exactly the point. Truly understanding those with Down syndrome and other related conditions continues to be our shortcoming, and our challenge, as a society. As lush and fully realized as this novel is, and as much as we are allowed to enter the lives and emotional realities of so many of its characters, the person at the heart of it remains a mystery to readers, as silent and unknowable as the stones. 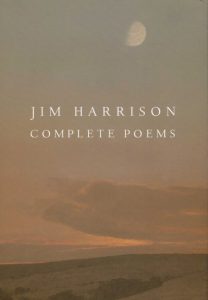 A monumental record of a life in poetry, Jim Harrison: Complete Poems (Copper Canyon, $40) manages to be greater than the sum of its parts. Editor Joseph Bednarik draws together Harrison’s 14 books of poetry — a body of work spanning more than 50 years — into a beautifully bound volume that’s biblical in its size and, perhaps, in its hold on contemporary American poetry.

In her insightful introduction, Terry Tempest Williams poses the question: How do we persevere in a time of climate crisis? She then answers, “I believe Jim Harrison shows us the way by being present in joy and wonder, in grief and despair, and, most importantly, by partaking fully in the day-to-day pleasures of a living world on this beautiful, broken planet we call home, regardless of what is coming.”

An example of Harrison’s presence in joy and wonder, grief and despair, comes in a series of Zen-inspired epiphanies called “After Ikkyu,” in which the poet, while walking the shoreline of Lake Michigan at night, reflects, “I poke my stick in the moon’s watery face, then apologize.” This ability to witness and be moved by natural beauty — combined with an all-too-human clumsiness and impetuousness that so easily destroys such beauty — is Harrison’s modus operandi in a nutshell. His poems remind us to look and listen, openly and intently, to the small moments that surround us, but also to realize our shortcomings and frailties.

What really makes this book a must-have for fans of Harrison’s work is the inclusion of his final poems. Bednarik collects 14 pieces written after 2016’s Dead Man’s Float that reveal a great poet who knows he’s near the end of life but nowhere near the end of his talent. His voice is strong, if gravelly and tinged with pain. His vision, turned both outward to the natural and human worlds, and inward via his blind eye, to the quiet rumblings of his volcanic, metamorphic soul, is as clear as it has ever been. 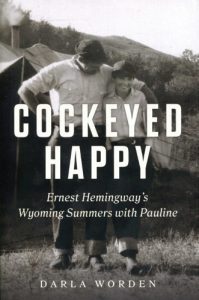 Darla Worden’s Cockeyed Happy: Ernest Hemingway’s Wyoming Summers with Pauline (Chicago Review Press, $28.99) is a welcome addition to the seemingly bottomless well of Hemingway studies — one that provides unique insight into the life of the iconic author by focusing not only on his little-studied time in the Rocky Mountain West (an excellent companion volume for this is Chris Warren’s Ernest Hemingway in the Yellowstone High Country), but also in its compassionate exploration of Pauline Pfeiffer, Hemingway’s second, and often maligned, wife. In forthright journalistic prose, Worden gives us a Pauline who earns our interest and empathy, and through the lens of her love, gives us a Hemingway who is more vulnerable and knowable than his myth. 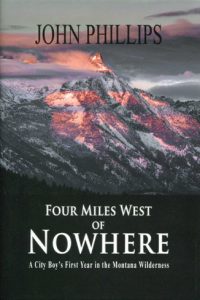 Four Miles West of Nowhere: A City Boy’s First Year in the Montana Wilderness (Pronghorn Press, $19.95) is John Phillips’ madcap memoir of moving 4,000 miles from his Michigan home to settle in the remote recesses of Montana’s Bitterroot Valley. The author quickly finds that nature’s whims are much more unpredictable, unforgiving, and unlikely to leave a “city boy” unbruised, than what he’s used to. From cover to cover, the book is laugh-out-loud funny, especially since it’s all happening to someone other than us. However, his tight and fast writing, honed by decades of working for national magazines, often has us forgetting that distinction and feeling the need to scramble for safety. 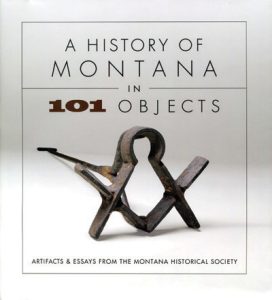 A History of Montana in 101 Objects (Montana Historical Society Press, $29.95) vibrantly recounts Montana’s past through rich photographs and brief essays. The editors do a remarkable job of presenting the great variety of cultures, ethnicities, personalities, events, and natural wonders that make up the history of this particularly storied state. The book serves as an intriguing doorway into a plethora of historical moments and epochs that will leave the reader happily hungry for more.

Marc Beaudin is a poet, theater artist, and bookseller based in Livingston, Montana. Along with contributing to numerous publications, including Cutthroat, High Desert Journal, and Whitefish Review, he’s written the books Life List: Poems and Vagabond Song: Neo-Haibun from the Peregrine Journals. Beaudin’s work has also been included in anthologies dedicated to environmental and social justice.